Walter Yeo And When Plastic Surgery Was Worse Than The Injury

After Walter Yeo lost both eyelids in WWI, he underwent one of the world's first plastic surgeries. But was the horrifying treatment worse than the injury? 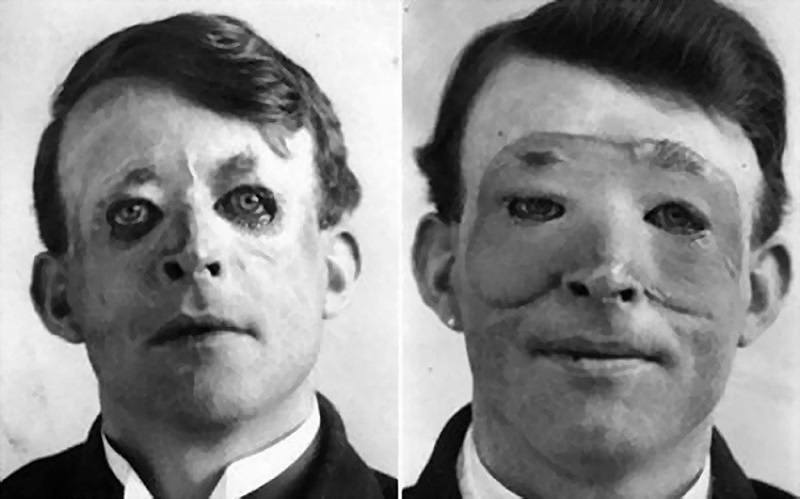 Our medical science is a pretty good measure of how much we’ve evolved. Whereas historical cures for mental illness once involved drilling holes into human skulls, we can now do things like re-engineer the polio vaccine that we ourselves created to also attack certain types of brain cancer.

Even on the cosmetic side, doctors have gotten so good at plastic surgery that they can literally make real-life Barbie and Ken dolls. But back in 1916, that was all just science fiction.

So when a 25-year-old English sailor named Walter Yeo lost his upper and lower eyelids while manning the guns on the HMS Warspite during World War 1, there wasn’t much hope for a solution. Luckily, just a year later, Sir Harold Gillies (the “father of plastic surgery”) had a pioneering — and, by today’s standards, utterly gruesome — idea.

Gillies grafted a mask of skin over Walter Yeo’s face and eyes in what was then an innovative new technique called “tubed pedicle.” This meant that Gillies cut a long flap of skin from Yeo’s chest and pulled it until it covered the disfigured area of Yeo’s face.

The skin newly moved to the face was never completely severed from the chest, however. Thus, “tubes” of Yeo’s own skin connected his chest and his face. This ensured blood flow and prevented infection at the graft site. The tubes were eventually removed when the face graft was healthily in place (see more explanation here).

After the surgery was successfully completed, Yeo’s eyelids were never fully restored, but he was provided a better quality of life. He actually returned to duty (and wasn’t discharged until 1921), then fathered his second child, and lived with his wife, mostly in his hometown of Plymouth, until his death in 1960 at age 70.

By today’s standards, you certainly couldn’t call Walter Yeo’s surgery an aesthetic success, but at the time, it was a medical miracle.

Next, check out three amazing medical advances that are fighting back against disease, and then discover the warped side of medical “science” with this analysis of the contributions of Nazi research.