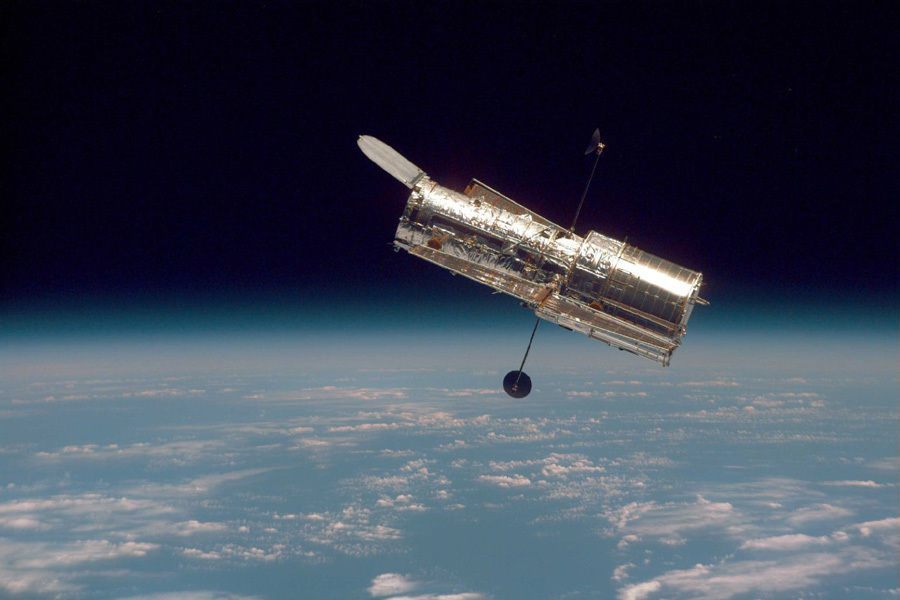 Before Galileo turned his telescope to the skies in 1610, all that we knew of the universe we knew because we could see it with our naked eyes.

Little did we know what wonders they hid from us. Galileo’s work sparked a revolution in science and astronomy, and while he may have made vast improvements on the telescope of his day, NASA’s 24,000 lb. space telescope has collected over 100 terabytes of data since its launch in 1990. A large number of these images have been curated to the Hubble’s Flickr stream. They give us an exciting glimpse into what those of Galileo’s time were missing, and what we, too, could miss if we don’t pay attention.

And if these images leave you yearning for some video footage, fear not: we’ve got you covered with the most important image Hubble has ever captured. 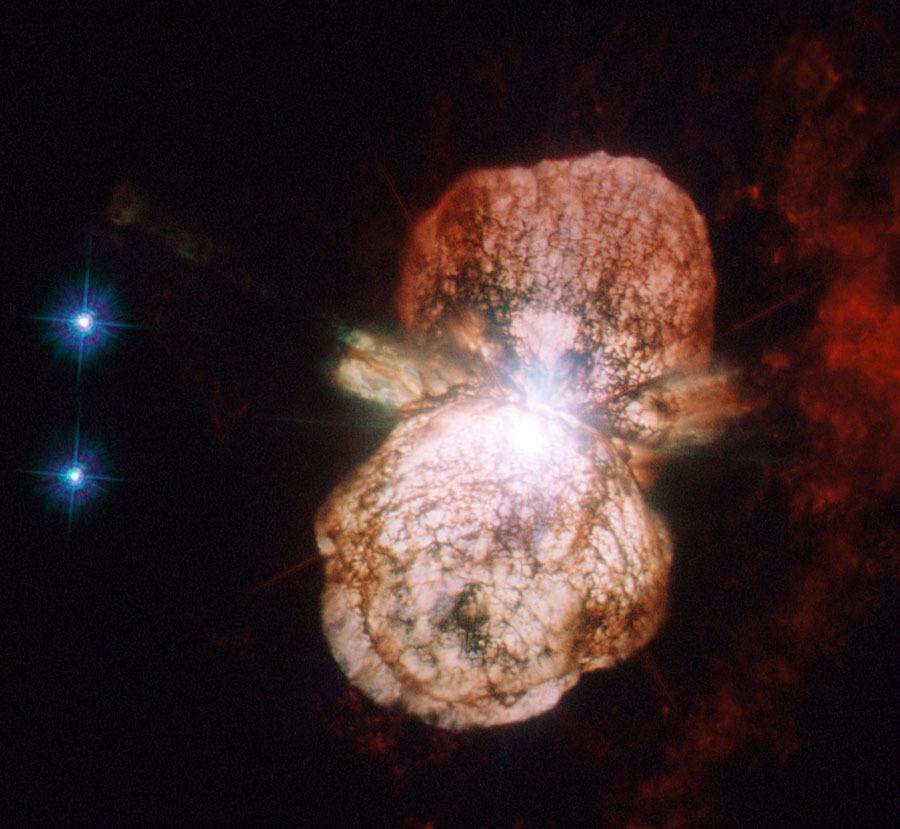 Huge clouds of matter – known today as the Homunculus Nebula – consist of byproducts from the binary star system Eta Carinae, which experienced a supernova impostor event in 1843. This is the closest star system to Earth which could experience true supernova status in the near future. (The near future in space-time could still mean a million years from now.) 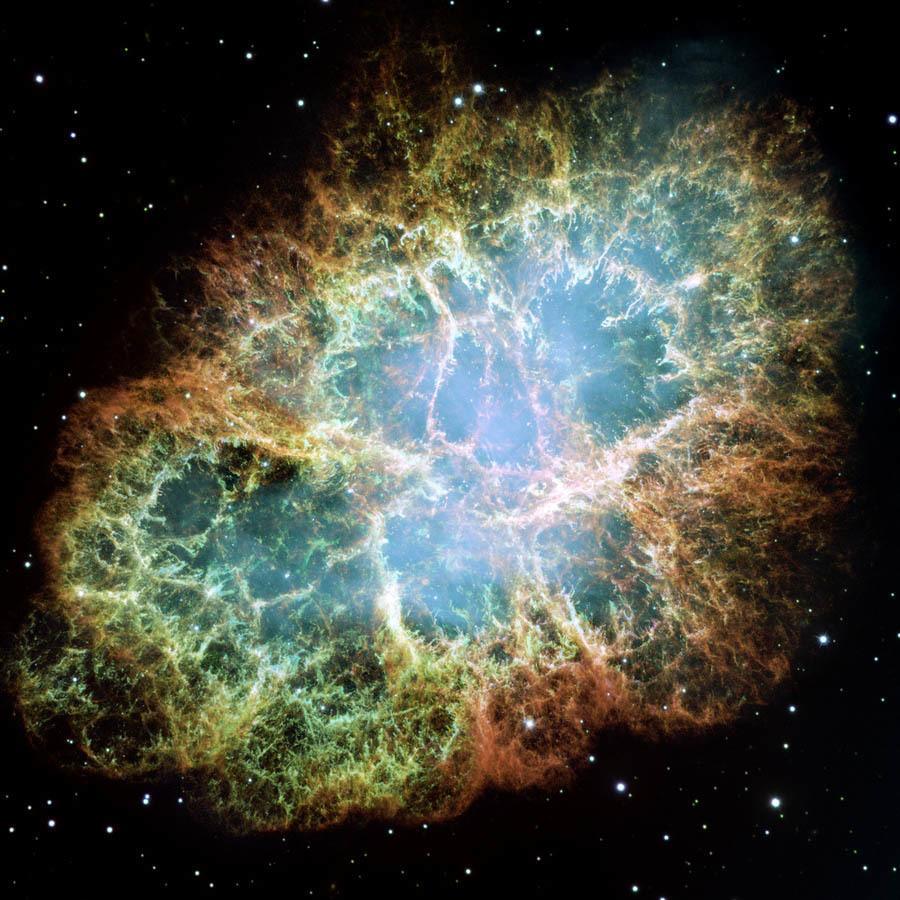 Asian observers recorded this supernova remnant nearly 1,000 years ago, in 1054.The Crab Nebula, as it’s known, is all that’s left of the fantastic stellar explosion. 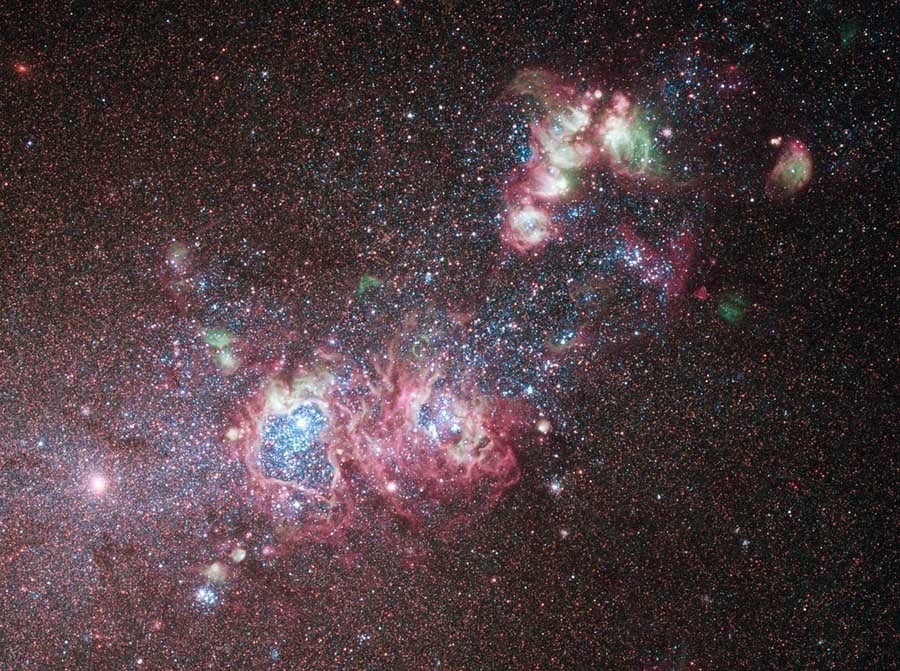 This is the dwarf galaxy NGC 4214, alive with baby stars and a haze of glowing hydrogen gas produced during star birth. 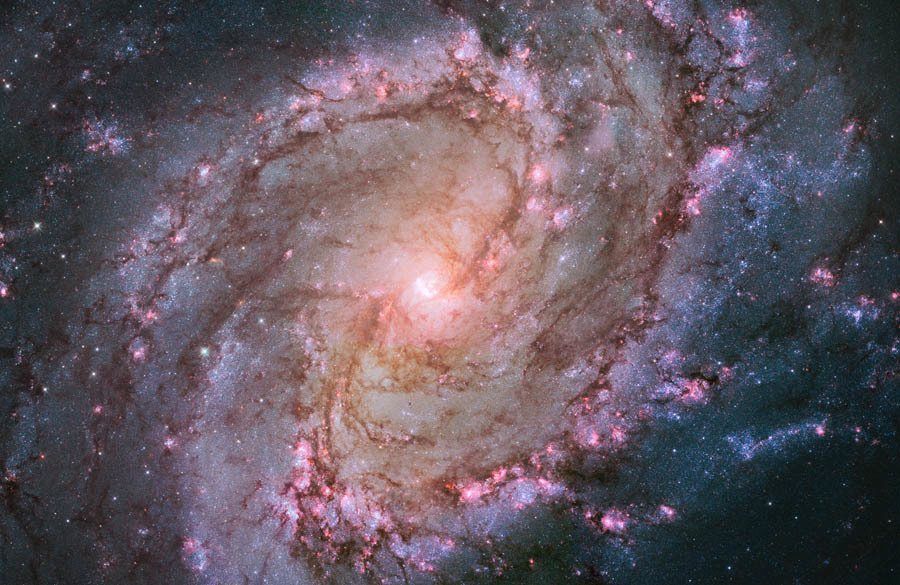 Just 15 million light years away from the constellation Hydra is the spiral galaxy M83, also glowing with new star formations. It is also known as the Southern Pinwheel. 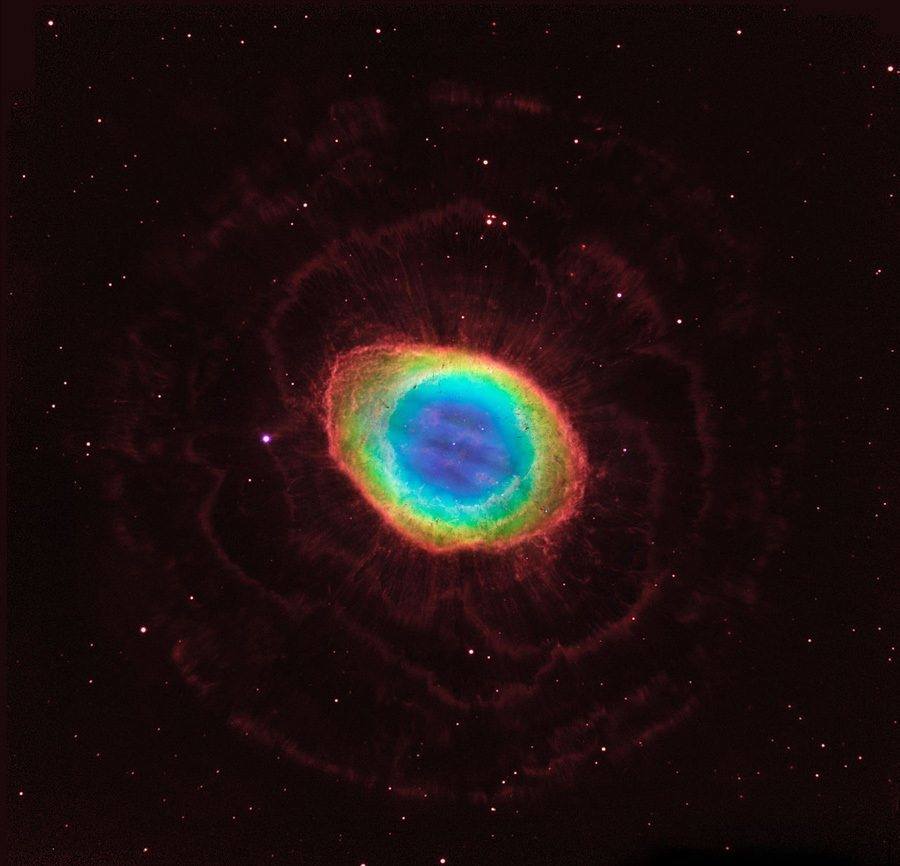 This one is actually a composite image; the Hubble gets a little help from the Large Binocular Telescope on the ground in Arizona, which supplies the infrared data. 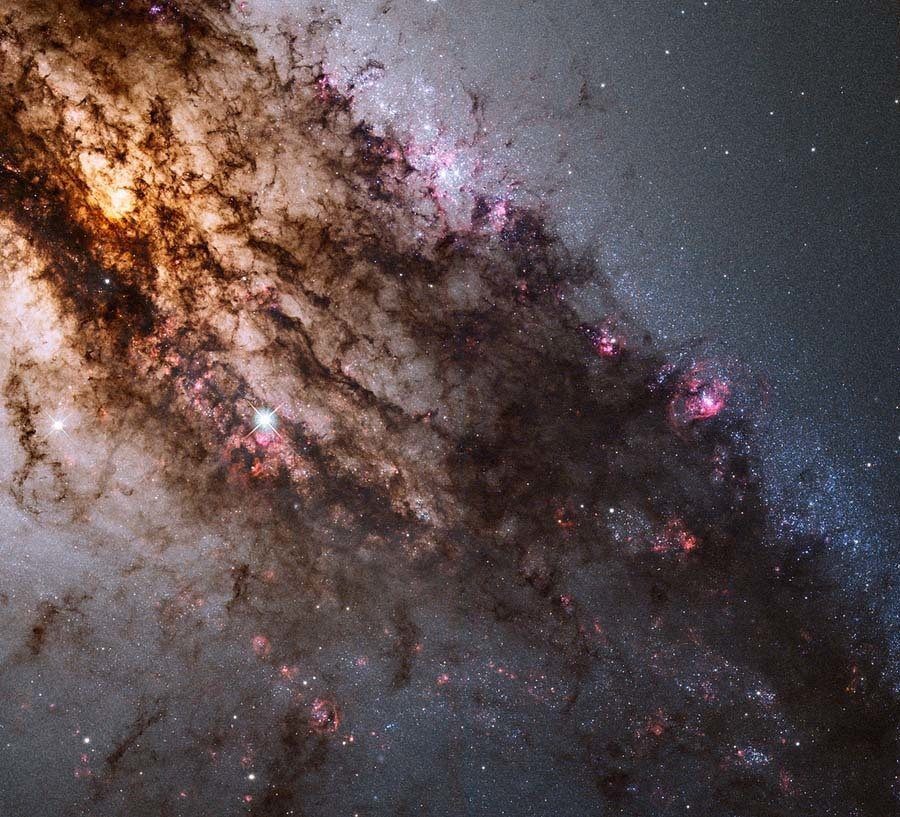 Young, blue-colored stars clustered in the dark pathways of the giant elliptical galaxy known as Centaurus A. In the center is a supermassive black hole, not visible here. 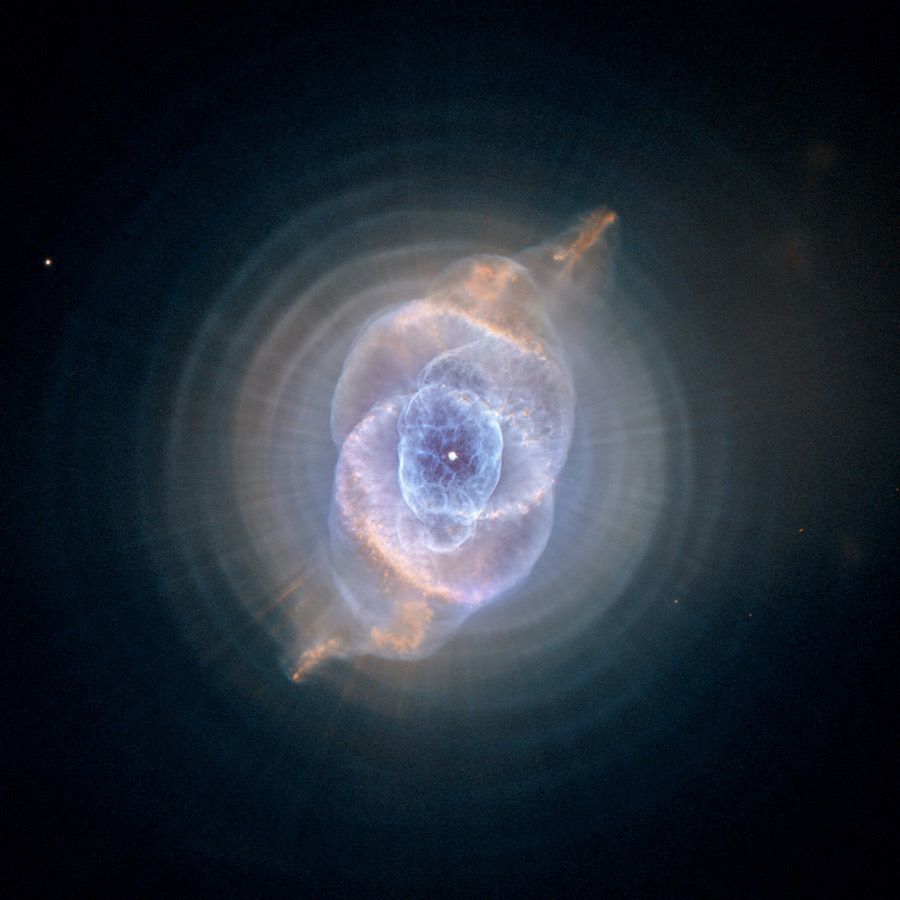 It may seem obvious why these particular planetary nebulae are named the Cat’s Eye Nebula, but it’s actually more akin to a shell, a tree, or an onion. NASA states of this formation, “Observations suggest the star ejected its mass in a series of pulses at 1,500-year intervals.

These convulsions created dust shells, each of which contain as much mass as all of the planets in our solar system combined (still only one percent of the Sun’s mass). These concentric shells make a layered, onion-skin structure around the dying star. The view from Hubble is like seeing an onion cut in half, where each skin layer is discernible.” 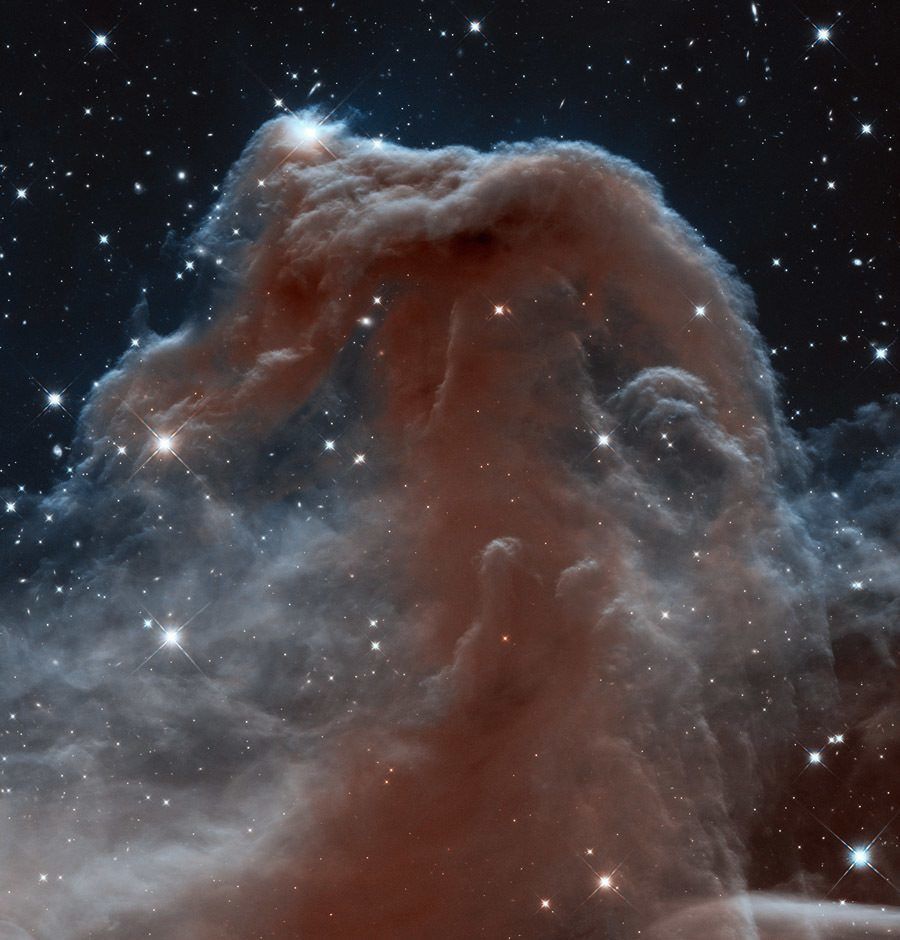 The iconic Horsehead Nebula may be one of the more readily recognizable images taken from the Hubble; it has been included in astronomy books in some form since its discovery over a century ago. 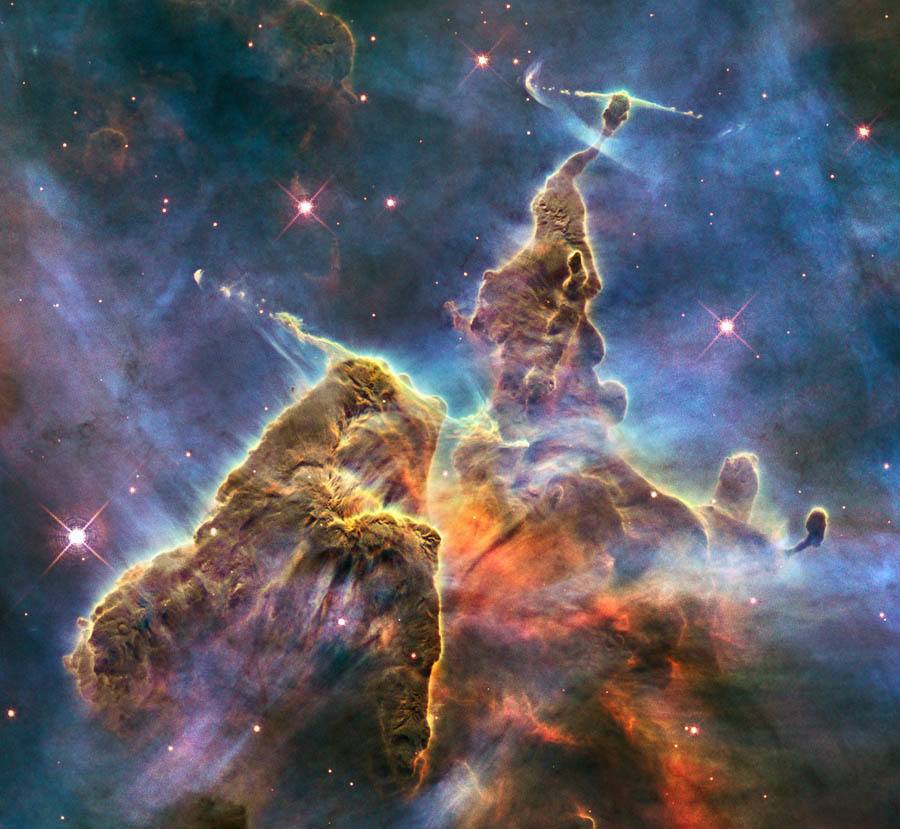 Another famous star nursery, the Carina Nebula is shown here with its three-light-year-tall pillars and jets of gasses emanating from the young stars. 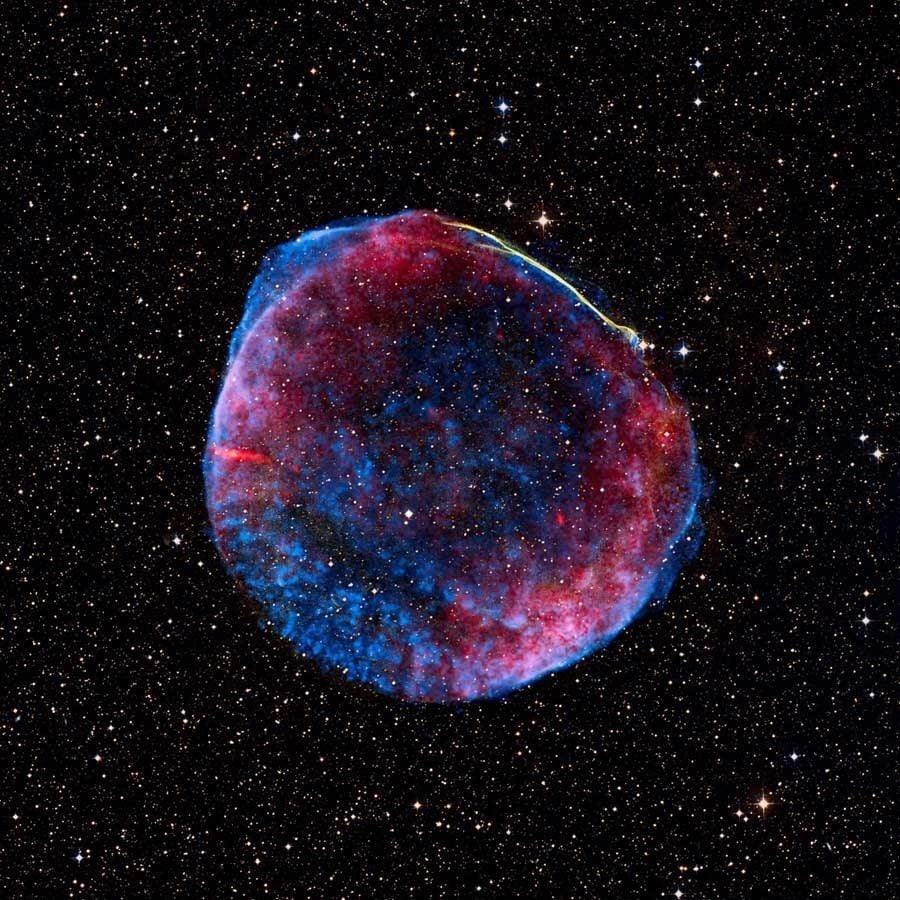 Combining optical, x-ray, and radio data we get this full shell composite image of the supernova remnant of SN 1006. At 18 parsecs, it is the physical size of the full moon. 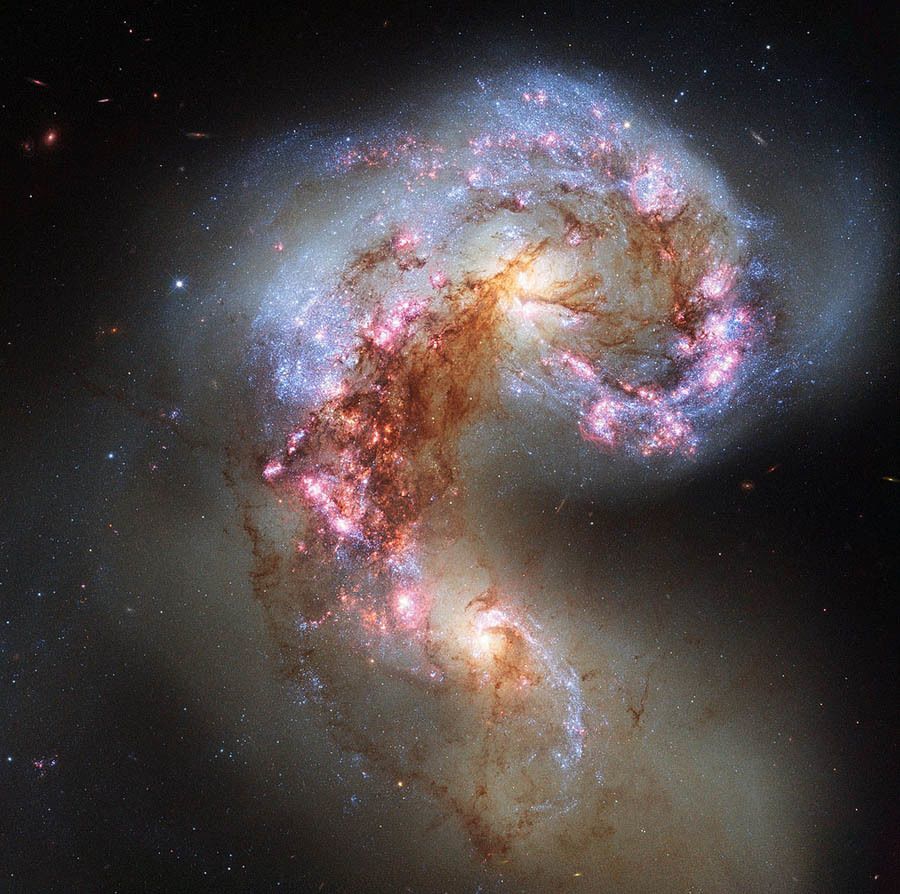 NASA sums up the beauty of the Antennae Galaxies best:

“The galaxies — also known as NGC 4038 and NGC 4039 — are locked in a deadly embrace. Once normal, sedate spiral galaxies like the Milky Way, the pair have spent the past few hundred million years sparring with one another. This clash is so violent that stars have been ripped from their host galaxies to form a streaming arc between the two. In wide-field images of the pair the reason for their name becomes clear — far-flung stars and streamers of gas stretch out into space, creating long tidal tails reminiscent of antennae.” 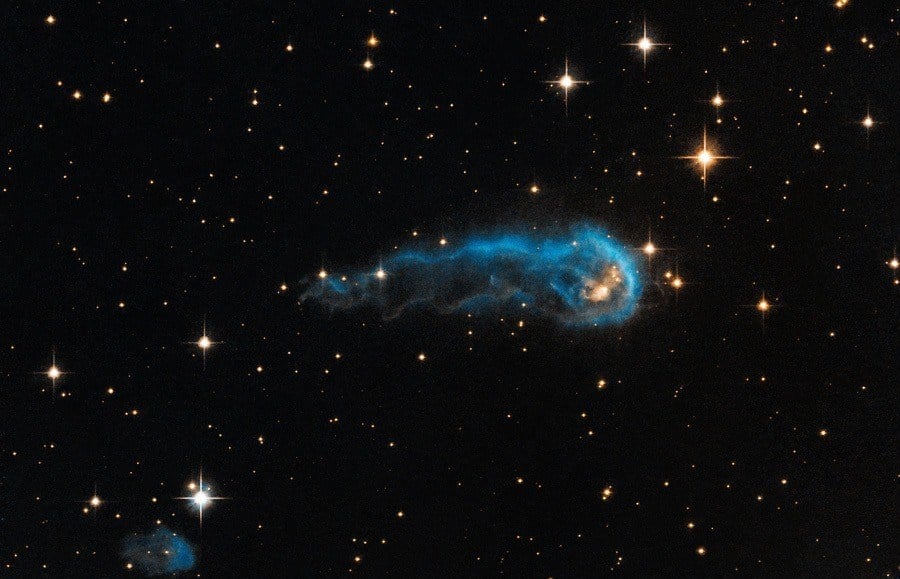 A caterpillar-shaped mass of dust and gasses are being blown into its familiar form by violent winds of ultraviolet radiation exuded from blindingly bright stars. The stellar caterpillar is approximately one light year long. 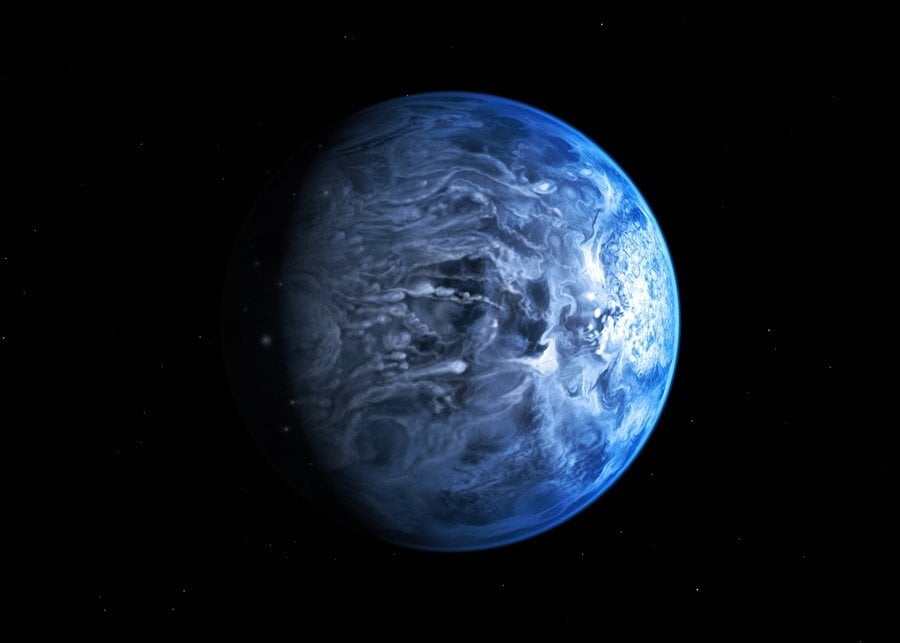 This huge, gaseous planet may resemble Earth, but it’s not nearly as user-friendly. The temperature reaches over 1800 degrees Fahrenheit, and it rains glass. Sideways. In 4000mph winds. Sure looks pretty, though. 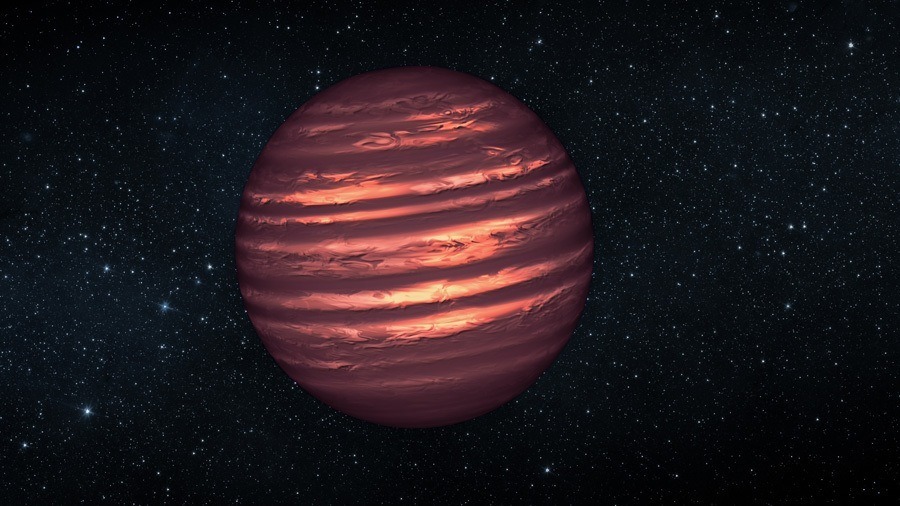 The Hubble has used its powers for probing into the atmosphere of Brown Dwarfs, and they concluded that “the forecast shows wind-driven, planet-sized clouds enshrouding these strange worlds. Brown dwarfs form out of condensing gas, as stars do, but lack the mass to fuse atoms and produce energy. Instead, these objects, which some call failed stars, are more similar to gas planets with their complex, varied atmospheres.” 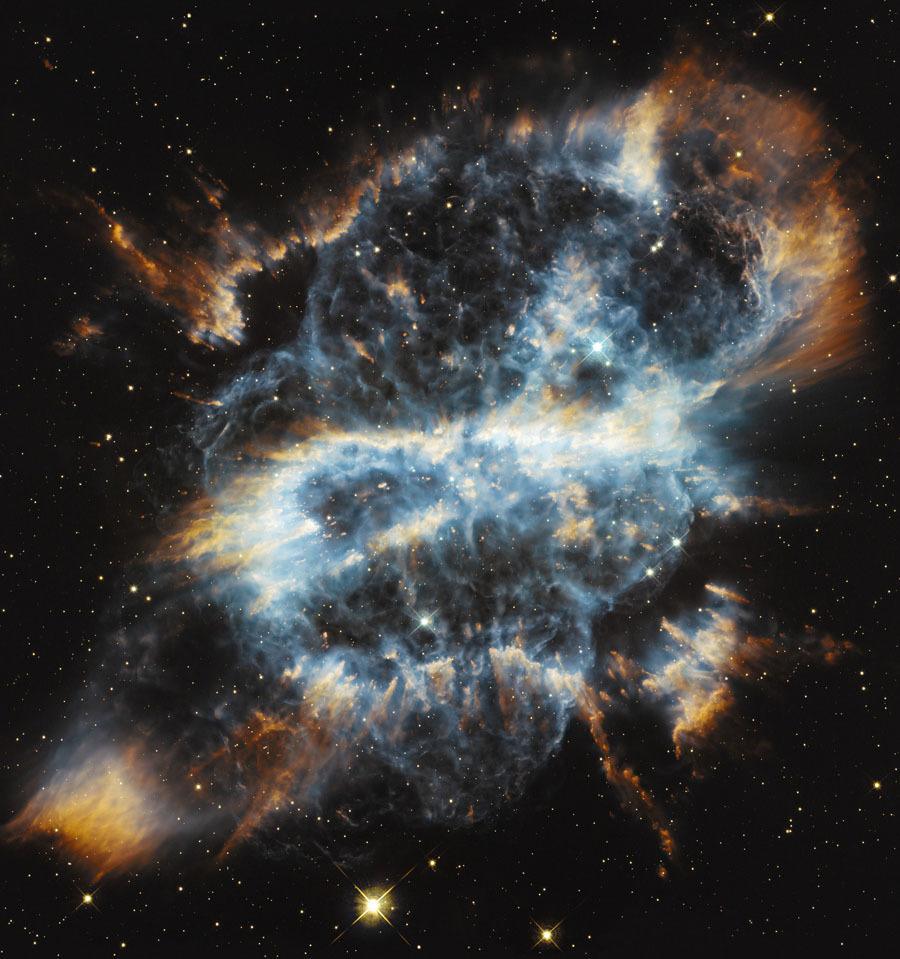 Planetary nebulae like NGC 5198 represent the short and final stage of stars of a medium size –like that of our own sun- wherein it uses up all the fuel left in its core. 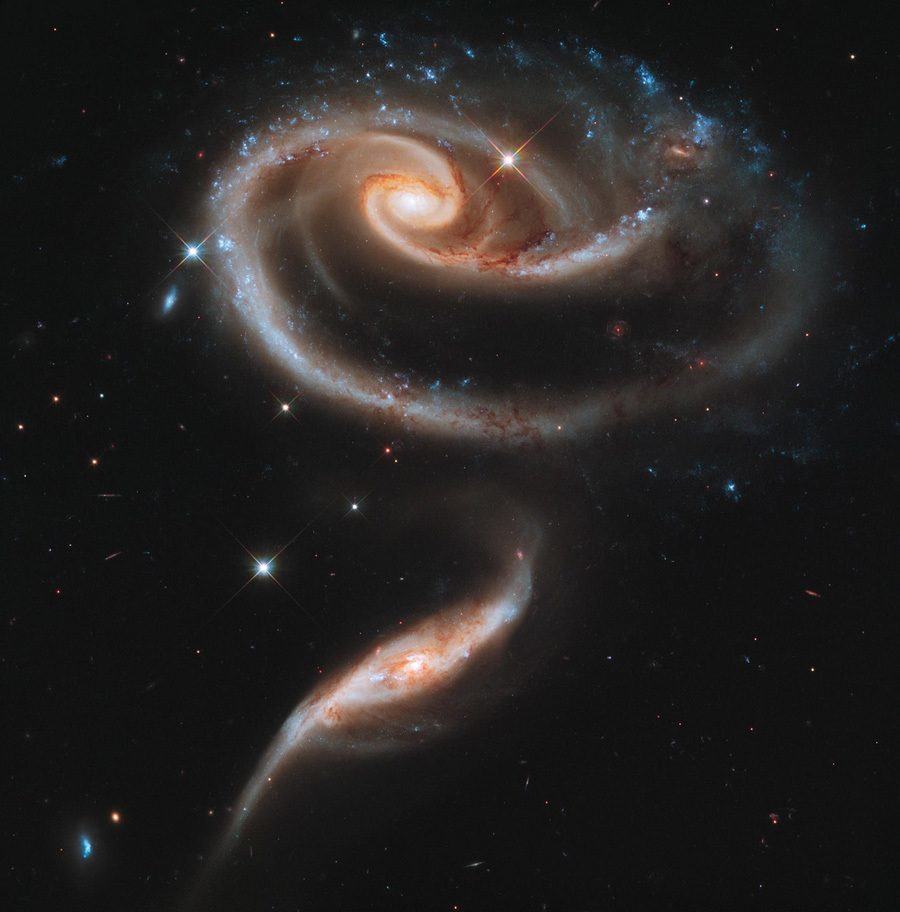 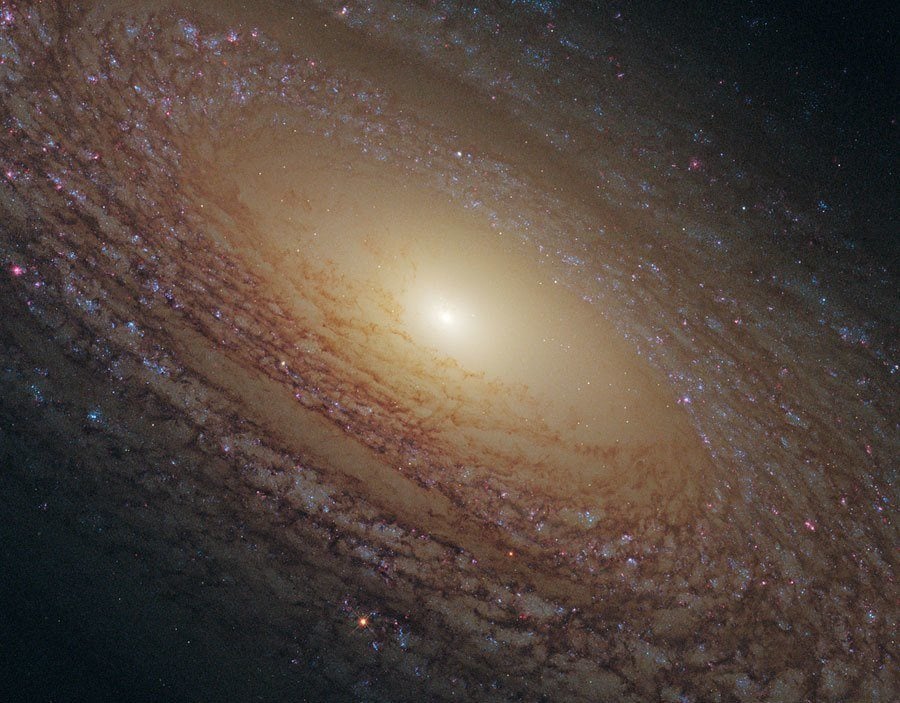 Tucked away in the constellation Ursa Major (The great bear) this disc of stars and dust belongs to the galaxy NGC 2841, and it currently has the lowest star formation rate compared to other spiral galaxies. 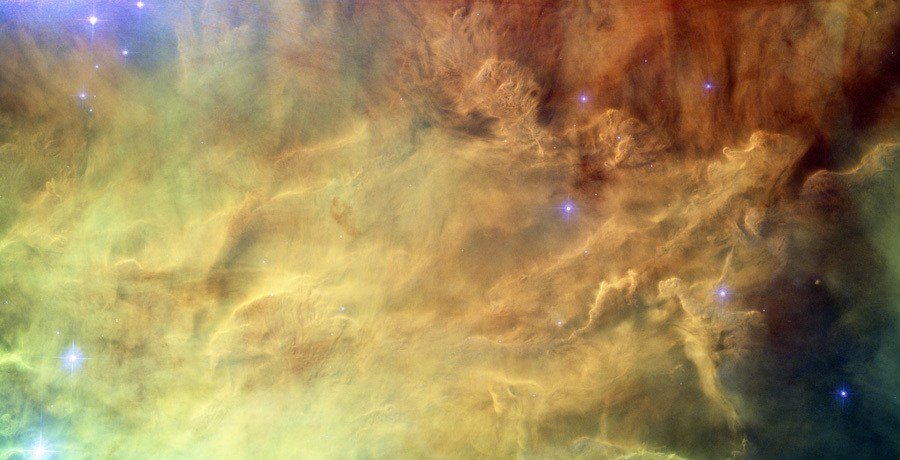 This radiating nebula can actually be seen with the naked eye at night, but without the help of a telescope and special filters, it shows as just a patch of gray. 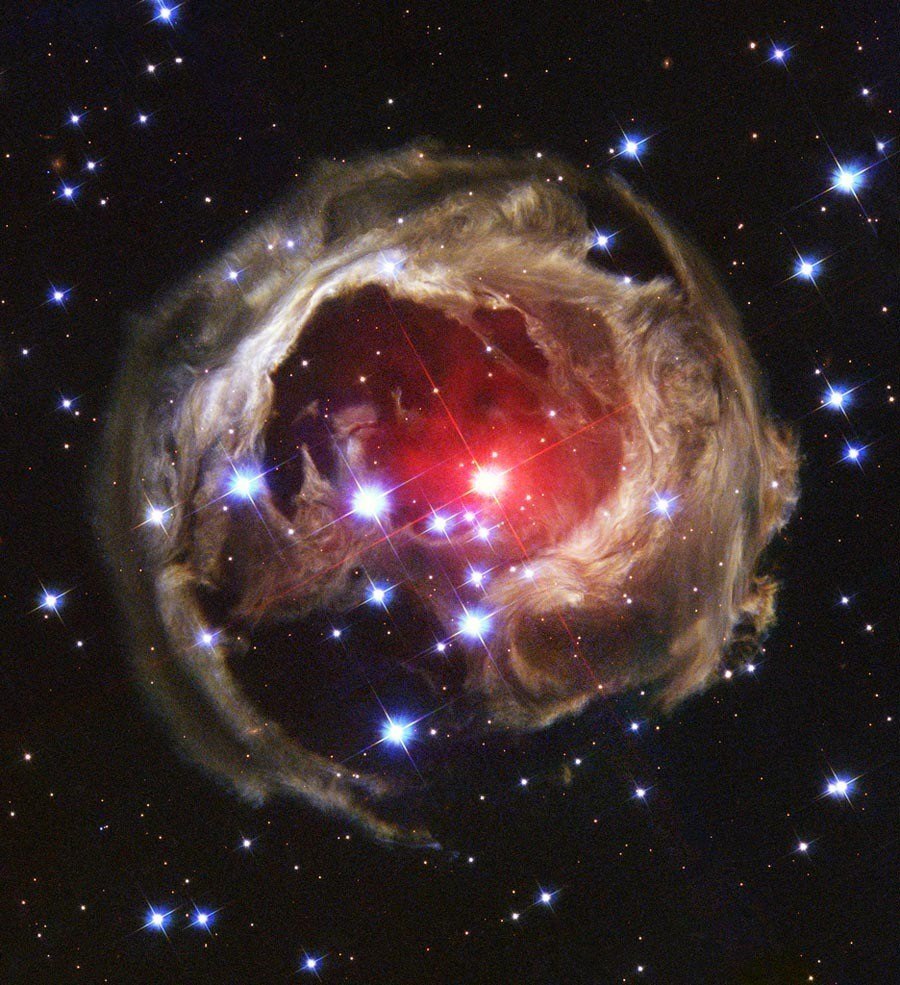 A Supergiant Star V838 with its dust illuminated. 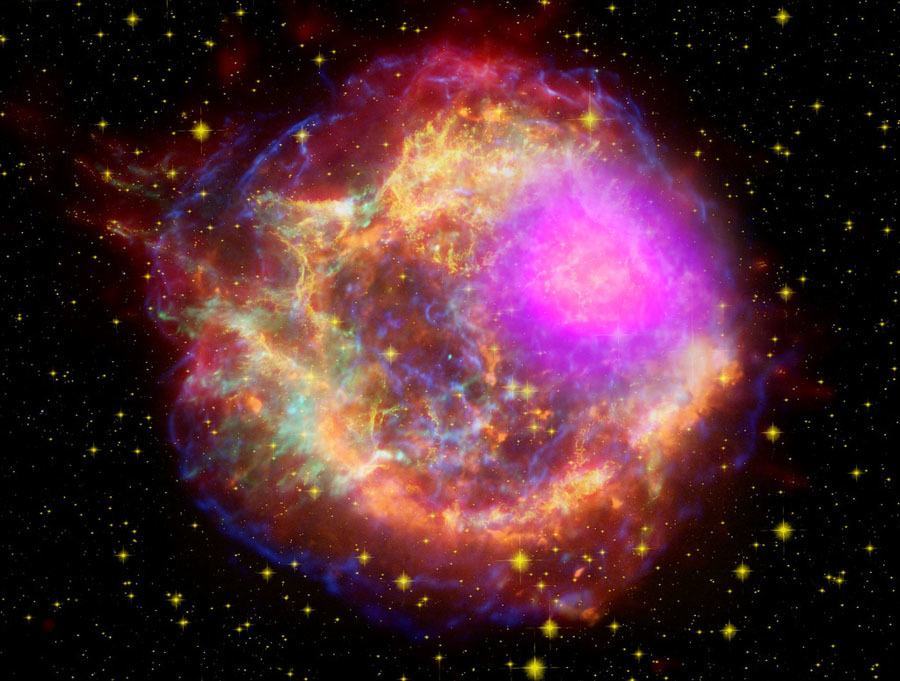 Gamma rays, X-rays, infrared and visible light come together again to create this composite image of the Cassiopeia A supernova. NASA’s Fermi Gamma-ray Space Telescope has some new images that “show where supernova remnants emit radiation a billion times more energetic than visible light. The images bring astronomers a step closer to understanding the source of some of the universe’s most energetic particles – cosmic rays.”