When Self-Electrocution Was Used To Cure What Ails You 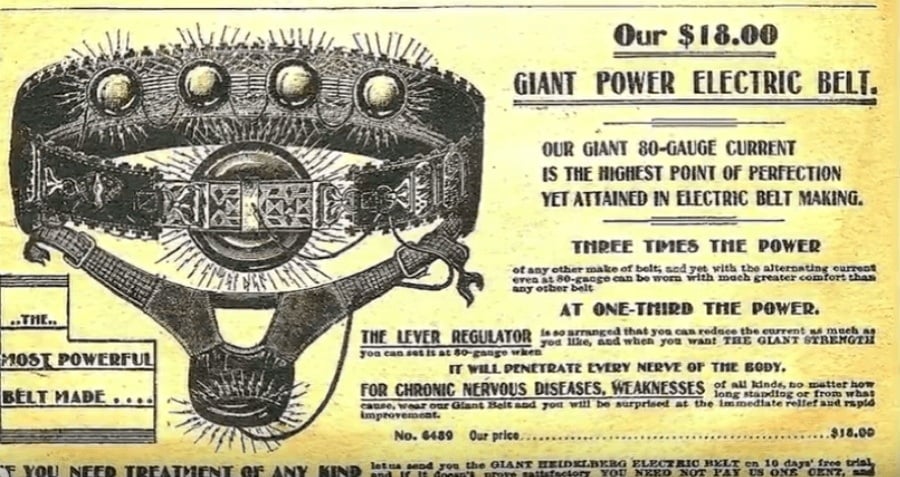 The 19th century boasted a wide range of inventions, from the steam locomotive to the stapler… to a belt that used an electric current to shock the ailment right out of your system.

First appearing at the World’s Fair in London in 1851, the hydro-electric belt, comprised of several batteries and electrodes, sent an electric current through its wearer’s body, and was used to “cure” everything, including migraines, anxiety, depression, poor digestion, constipation, gout, and even a lack of confidence.

Invented by Isaac Pulvermacher of Vienna, the creation was most commonly known as Pulvermacher’s galvanic chain belt, although the patent was used and sold under a variety of names, including Addison’s, Owen’s, and Heidelberg’s.

Made of copper, zinc, wood, and leather, the belt came with two sponges, a 32-page instruction booklet complete with testimonials from satisfied customers. It weighed around two-and-a-half pounds, and consisted of a chain of batteries to be worn around the problem areas, be it your head or your leg, like a belt.

Promising to be of help with “chronic nervous diseases and weaknesses of all kinds, no matter the cause,” the belt was said to penetrate every nerve in the body with an 80-gauge current, making it the “most powerful” self-electrocuting belt of its time.

The hydro-electric belt was initially well-received, even supported by some of Queen Victoria’s physicians and medical staff at the height of its success. It’s even been said that the writer Charles Dickens took to the device to treat rheumatism in his leg, although the outcome of his alleged treatment was never documented. 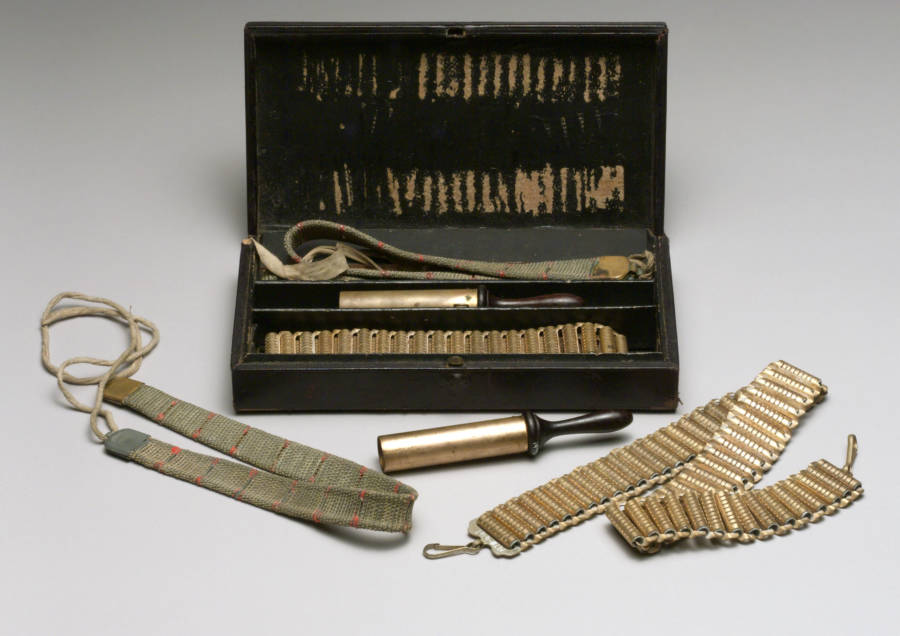 While it may seem as though Pulvermacher created the idea behind this device, history shows that the use of electrotherapy has been in practice as far back as the year 48 BC, with Scribonius Largus, physician to the Roman Emperor Claudius.

Largus, in the company of other ancient medical practitioners such as Hippocrates and Galen, would often look to the electrical discharges given off by torpedo fish, also known as the electric ray, to treat conditions ranging from migraines to gout to a prolapsed anus.

By the 18th century, scientists were better able to harness the power of such energy, and experiments in the use of electric current to cure mental illness, namely, melancholia, were conducted by physicist Giovanni Aldini of Italy, and Benjamin Franklin.

The mass production of the chemical battery also made for safer strategies in treating illnesses with electricity, which helped to prevent unfortunate accidents such as that of Robert Roche, who used a homemade “electrifying machine” to relieve his 16-year-old son of the periodic fits he suffered, an experiment that once ended with his son’s shirt catching fire.

By the late 19th century, with the emergence of mail-order catalogs now allowing people all over the world to purchase whatever they desired with somewhat relative ease (not by today’s standards, of course), Pulvermacher’s invention seemed to arrive at just the right time in history and enjoyed many years of success. 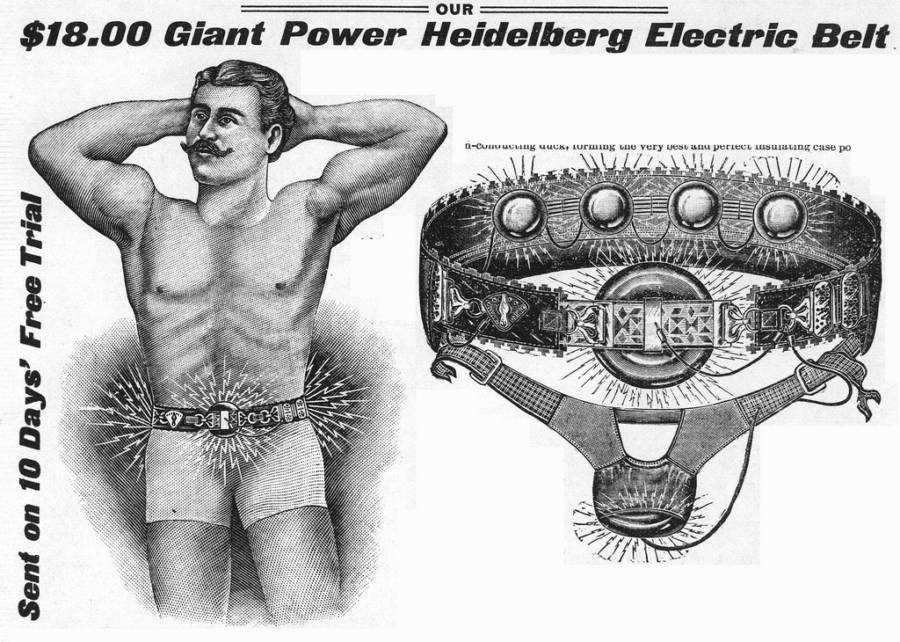 The popularity of the hydro-electric belt did eventually die, however, revealing itself to be more of a fad than a bonafide medical cure. The belts became associated with “quack” practitioners who took advantage of the device’s popularity, and the medical community would end up rejecting the device entirely, fed up with the use of certain physicians’ likenesses in advertisements without their permission.

Pulvermacher himself was even involved in a somewhat embarrassing court battle, upon attempting to sue a consumer for non-payment of services rendered. The customer, known as H. Mott, of Oxford, had agreed to pay for the belt on an installment plan. However, after continued use, Mott began to experience severe headaches and no improvement of his condition. He then sent the belt back, demanding compensation in return.

Today, electrotherapy is considered to be a credible method of treating pain and inflammation, and while the flashy gadgetry of the electrocuting belt is no more, its underlying methods —ones in use today — are not much different than the technology behind Pulvermacher’s infamous creation.

Next, read up on the world’s most bizarre modern medical treatments. Then, discover the twisted history of the widely misunderstood lobotomy.