Immurement: A History Of Walled In Terror And Cruelty

The history behind one of the cruelest forms of capital punishment, immurement, from ancient times to some shockingly recent accounts. 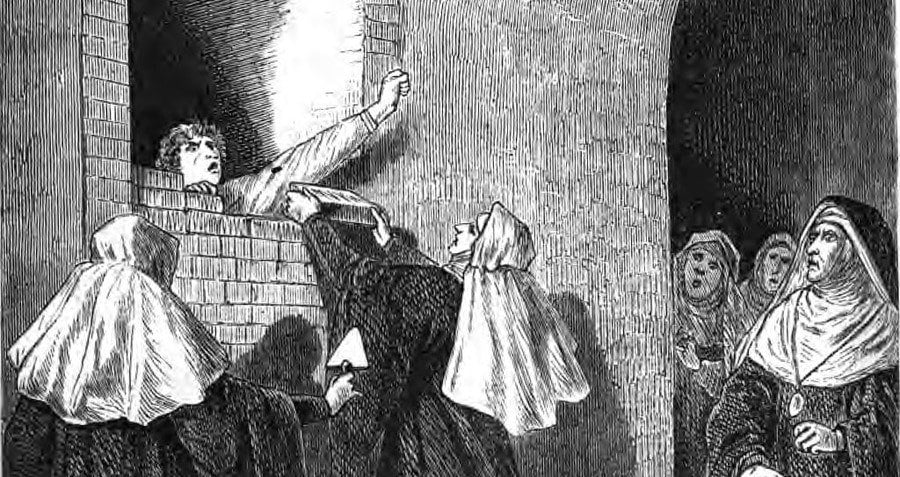 “I resumed the trowel, and finished without interruption the fifth, the sixth, and the seventh tier. The wall was now nearly upon a level with my breast. I again paused, and holding the flambeaux over the mason-work, threw a few feeble rays upon the figure within.”

In 1846, Edgar Allan Poe’s short story The Cask of Amontillado delivered to readers a chilling tale of truly sadistic murder. Poe’s piece tells the story of a man recounting to a friend how he had his revenge on a former acquaintance by luring him into the catacombs with the promise of a highly prized cask of wine. The story’s narrator then describes how he chained his enemy to the wall and proceeded to seal him into his tomb with brick and mortar, leaving him to die a miserable death within.

The means of murder that Poe’s narrator described is known as immurement, a terribly cruel form of punishment in which the victim is essentially buried alive and left to suffocate or writhe in agony until eventual starvation and dehydration lead to death.

The cruel practice typically has been carried out by locking the unfortunate soul in some sort of coffin-like box or in other cases, sealing them into a wall or other structure of some kind.

The history of immurement is without question, a black spot on the timeline of humanity and dates back centuries with examples of the practice being found on almost every continent.

Immurement was typically used as a form of capital punishment, in which the accused was found guilty of some crime and a slow death was the justice handed down. The second use of immurement, while just as horrid and cruel yet perhaps even more disturbing, was in human sacrifice, usually to bring good fortune to those doing the sacrificing.

Otherwise, one of the earliest uses of immurement dates back to the Roman Empire, when it was used as punishment for a class of priestesses known as the Vestal Virgins. The Vestals were girls from respected Roman families and considered to be free of mental and physical defects. They had taken a strict vow of celibacy and committed themselves to tending to a sacred fire honoring Vesta, the goddess of home and family.

If a Vestal Virgin broke her vow of celibacy, she was to be punished with death and buried in the city. Spilling the blood of a Vestal was forbidden though and under Roman law, no person was to be buried within the city, which meant that the Romans had to get creative.

After being condemned by the college of pontifices, a Vestal’s executioners would prepare for her a very small vault in the ground, usually containing a couch and small amount of food and water. The Vestal would be led into the vault where she would be left to die.

Punishment of a similar manner was also handed down in the Middle Ages by the Roman Catholic Church to nuns or monks who had broken a vow of chastity or expressed heretical ideas.

Unlike the Virgin Vestals, these shamed nuns and monks were to be sealed in a tomb not to die within mere days, but instead to live out a slightly longer life of complete isolation. Known as “vade in pacem” or “go into peace,” the punished would go without any sort of contact or sight to the outside world, having only food dropped through a small opening. 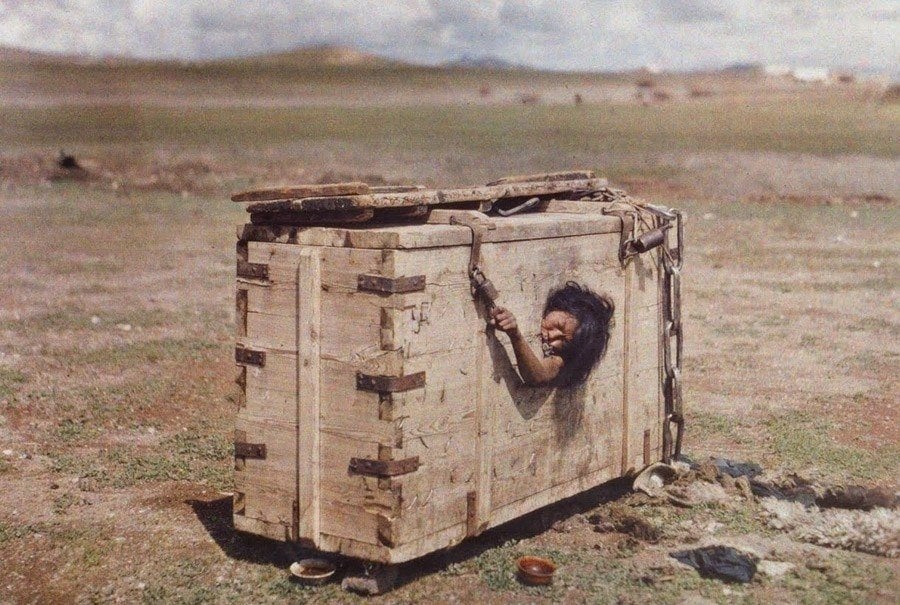 While it’s convenient to dismiss such torturous capital punishment as the practice of the distant past, immurement has been used far more recently than you might realize. Accounts of immurement as recent as the early 20th century have been noted in Mongolia and what was then the Persian Empire (now Iran).

One of the earliest accounts of immurement in Persia came in the 17th century from a gem merchant, Jean Baptiste Tavernier, who noted stone tombs on the plains with thieves encased in the stone up to their necks. Tavernier wrote that the men were left with their heads exposed “not out of kindness, but to expose them to the injury of the weather, and assaults of the birds of prey.”

In his book Behind the Veil in Persia and Turkish Arabia, traveler M. E. Hume-Griffith wrote of traveling in Persia between 1900 and 1903 and the disturbing sights and sounds of men sealed and left to die in stone pillars:

“Another sad sight to be seen in the desert sometimes, are brick pillars in which some unfortunate victim is walled up alive… Men bricked up in this way have been heard groaning and calling for water at the end of three days.”

Similar occurrences of punishment through immurement have been documented in Mongolia as recently as 1914, with people locked in wooden crates that prevented them from comfortably sitting or laying down. Only a small hole might allow them to poke their head or arms out to take in any food or water that a merciful executioner might offer. 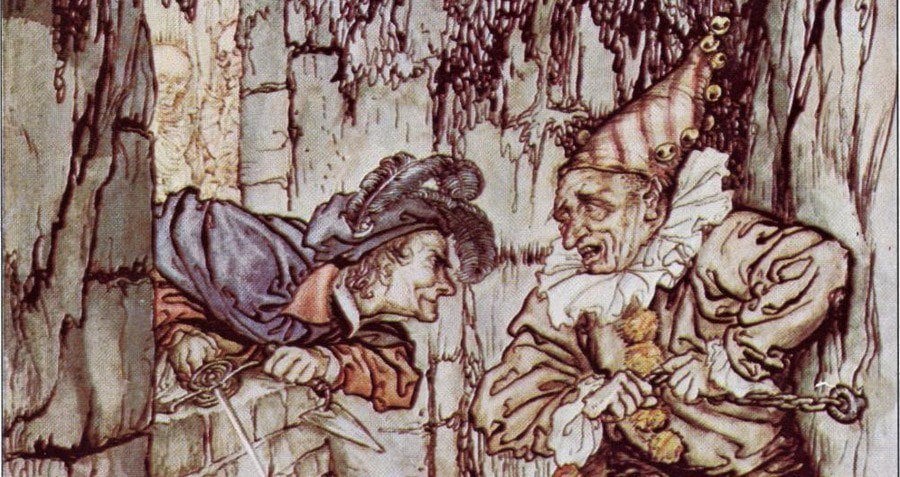 As unnerving as immurement is, its use as a means of human sacrifice in the construction of buildings is perhaps even more unsettling. Throughout parts of Europe, there are stories and findings of bodies entombed in buildings and bridges dating back to Medieval times. Various folk songs attest to this use of immurement as a human sacrifice to remedy problems in a construction project or to bestow it with strength.

One such example of this is the Serbian poem “The Building of Skadar“, which describes a worker who had to wall up his bride in the construction of a fortress.

Most disturbing though was the reported use of immurement in Germany in which children were occasionally used as human sacrifices with the idea that the innocence of a child would make the foundation of a castle invincible.

One particularly horrid example is that involving Burg Reichenstein Castle. While rebuilding the already 400-year-old castle in the mid-16th century, nobleman Christoph von Haim was assassinated by a farmer who claimed that von Haim had immured his son in the castle’s foundation. Today, the castle functions as a hotel and popular spot for weddings.

Immurement was also reported to have been used in the construction of churches, such as one in Vilmnitz, a district of the German town Putbus. During the construction of these churches, shortly after the introduction of Christianity to the area, the project was plagued with problems. Rather than seek out the cause of such problems, blame was given to the devil and the immurement of a child in the churches was taken as the viable solution.

Sadly, physical evidence indeed attests to this practice in various places throughout Europe. Accounts in the 1800s of the demolishing of a bridge in Bremen, Germany reported the skeleton of a child in the structure’s foundation. And an adult skeleton was found within the walls of a church in Holsworthy, England in 1885.

Whether used as a form of capital punishment or human sacrifice, immurement can only be summed up as an example of unspeakable cruelty that numerous cultures are guilty of having practiced for far too long.

Next after learning about the history of immurement, read up on the ten worst execution methods in human history. Then, discover the ancient Chinese art of lingchi, perhaps the most terrifying punishment ever devised.