Jacob Coxey's Army of 500 unemployed citizens marched on Washington D.C. to protest a crippling 1894 depression. Though they failed, they set a national precedent that lasts to this day.

We don’t generally think of the unemployed as a political force in America. But there have been a number of unemployed marches that evolved into substantial movements comprised of tens of thousands of people. One such protest, now known as Coxey’s Army for the men who marched behind businessman Jacob Coxey onto the Capitol, marked the first time that any collective body of people marched on Washington.

It was the summer of 1894 in the midst of an economic downturn that saw national unemployment rates reach as high as 10 percent. People were angry, and — before unemployment compensation or welfare existed — they wanted help from their government. 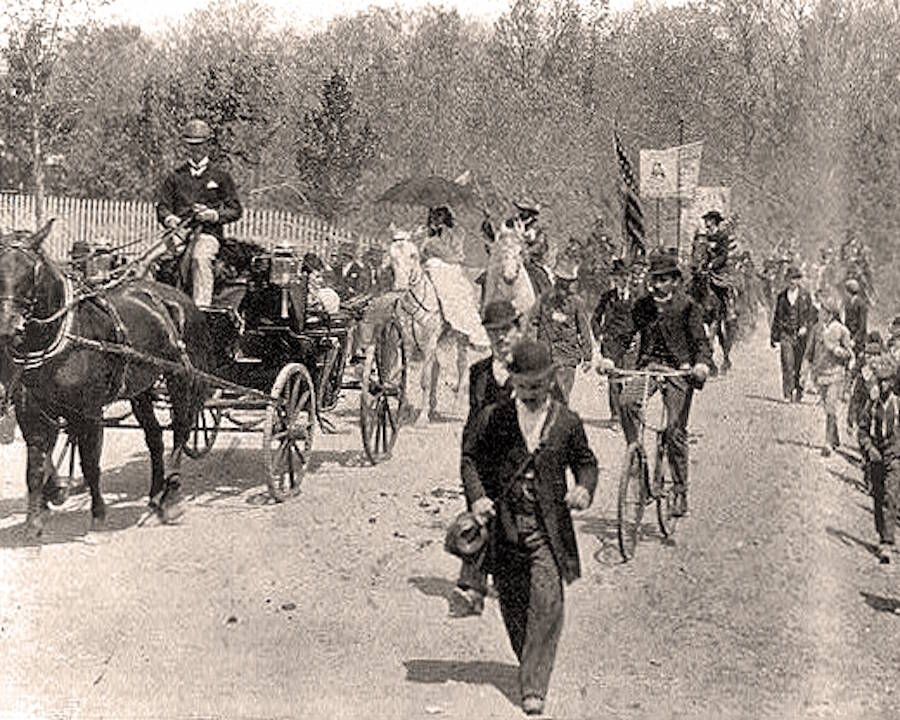 To get it, Jacob Coxey organized a march of incensed men and women to storm the Capitol. Indeed, they did storm it and they took over trains and roads en route to Washington, too. Though the march would ultimately prove to be unsuccessful, it would galvanize the culture around protest in our Nation for generations.

It was during the fallout of the Panic of 1893 which saw a depression the likes of which the country wouldn’t experience again until the Great Depression. Prisons swelled with panhandlers and beggars desperate to make ends meet. The wealthy put on “Hard Times Balls” during which the elitist in the best hobo costume was awarded a sack of flour.

From this turmoil emerged Jacob Coxey, an Ohio native and constant political candidate with populist ideals. Jacob Coxey himself ran a sand quarry before the economic downturn. His own economic disenfranchisement became the impetus for his early Federal unemployment support project. 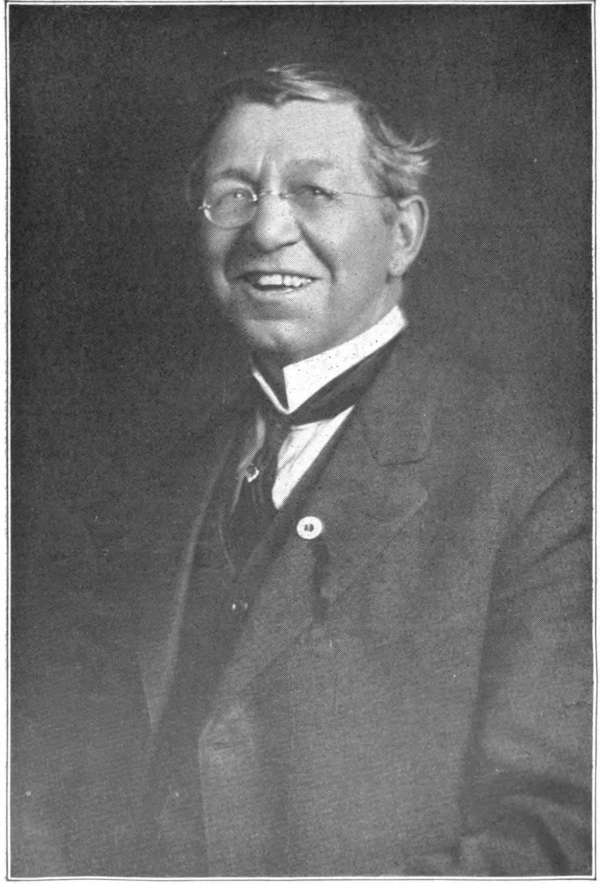 Wikimedia CommonsBefore he became an unofficial general of an army of the unemployed, Jacob Coxey owned a sand quarry.

Coxey’s plan was called the “Good Roads Bill” and it established a public works programs that encouraged profitable activities like road-building through the employment of those without jobs or a way to earn a living. He proposed that $500 million be placed in a fund known as “the General County Road Fund System of the United States” which was intended to do just that: Employ men to build roads.

These ideas eventually ended up in the New Deal of 1933 when Franklin D. Roosevelt turned Coxey’s premises into a key part of his administration — one that helped him to win the Presidency — but for now, it would fail.

As of 1894 Coxey’s ideas were too radical, which he recognized: “Congress takes two years to vote on anything,” he said. “Twenty-millions of people are hungry and cannot wait two years to eat.”

So he didn’t wait. 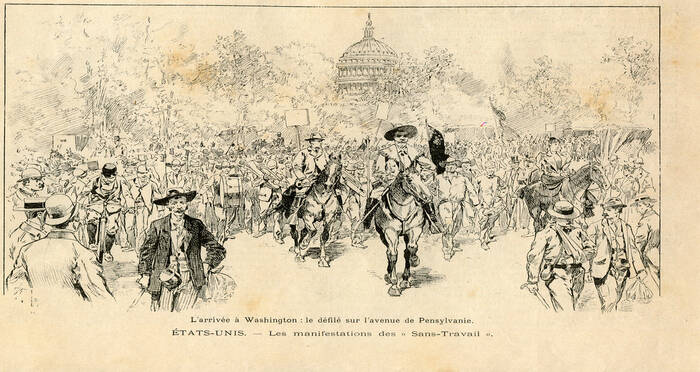 Back in Ohio, Coxey inspired 100 men to join him on a march to Washington to deliver the “Good Roads Bill” to congress. Under “General” Coxey, the small unarmed militia headed for D.C. and collected supporters along the way. At one point, Coxey claimed his band of unemployed numbered 100,000.

Meanwhile, there were other similar armies that also began to march towards D.C. Some of these began further West and thus never made it all the way to D.C., including Kelley’s Army and Fry’s Army from California.

Coxey’s Army had set out from Ohio on March 25, 1894. Though the protest march was officially named the “Army of the Commonwealth in Christ,” “Coxey’s Army” would be the name that stuck. Along the way, citizenry helped members of these armies; they were supplied with food and shelter and many joined in on the march.

Not all Coxeyites and similar armies were peaceful protestors, however. While Coxey’s Army set up alcohol-free camps and welcomed men and women both black and white, other factions of the army took more drastic measures. 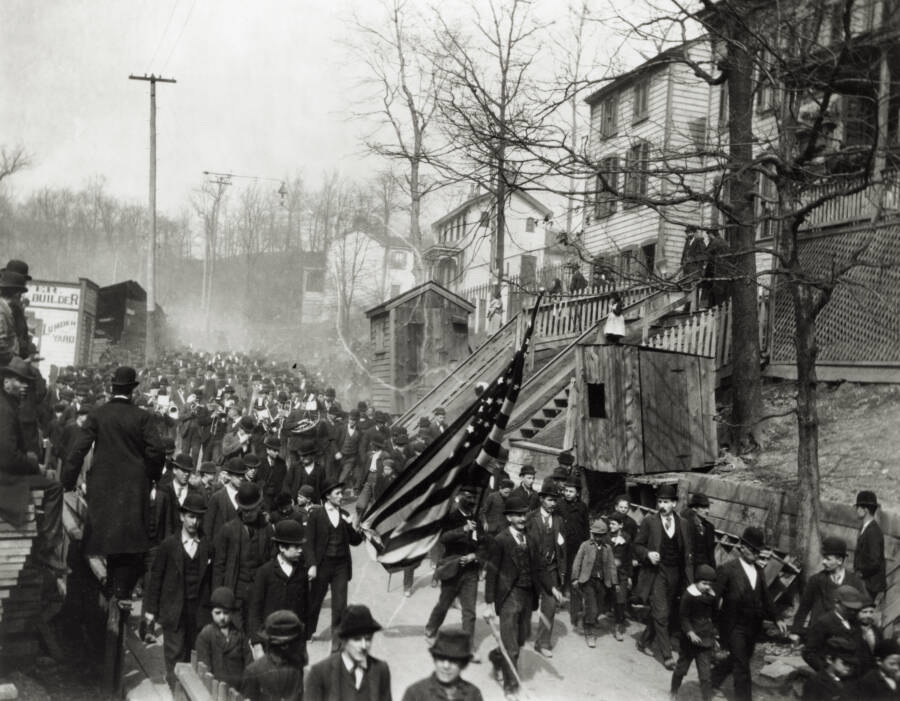 Library of Congress/Corbis/VCG via Getty ImagesA huge throng of “General” Jacob Coxey’s unemployed workers march through a town on the way to Washington, D.C.

One such army led by William Hogan also set out in the spring of 1894, for the Capitol. Knowing that the wealthy ran the railroads which were the only effective means of transportation at the time, William Hogan and some 700 men captured a Northern Pacific Railway train and defied federal attempts to take the train over until the vehicle reached Montana. A copycat group of Coxeyites hijacked a train in Missoula, too, but backed down “without a struggle.”

Nonetheless, Coxey’s Army was one among the many highly publicized marches headed for Washington, but only his would become the first to actually make it. Though Coxey claimed at some points in the pilgrimage his army numbered 100,000, only 500 of those protestors made it to Washington.

There, Coxey’s Army became the first official protest march to occupy streets, parks, and lawns of Washington. D.C. President Grover Cleveland did not take kindly to Coxey’s Army; officials arrested key leaders, including Coxey himself, and the protest was quelled rather quickly.

Reboot And Legacy Of Coxey’s Army 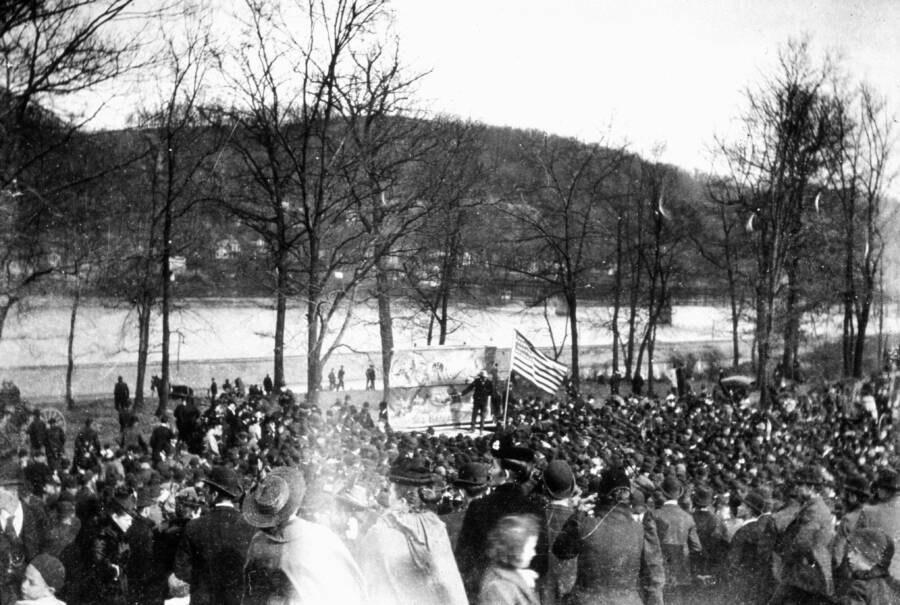 Though his first march was unsuccessful in introducing his bill, it did galvanize progressivists of the next generation including Mother Jones and Jack London.

Coxey, too, remained a consistent figure in the political arena. He ran for numerous elected offices, ranging from the governor of Ohio to the Presidency of the United States. He was elected Mayor in 1931 in his hometown of Massillon, Ohio.

A version of Coxey’s Army returned to Washington in 1914 later to once again draw attention to the economic downturn and high unemployment. He was, once again, ignored.

It would not be until 1944 that the tenets of his Good Roads Bill reached the White House. In fact, in a largely symbolic but still satisfying culmination of his life’s work, after the New Deal came about, Coxey was asked to read his bill from the Capitol steps. 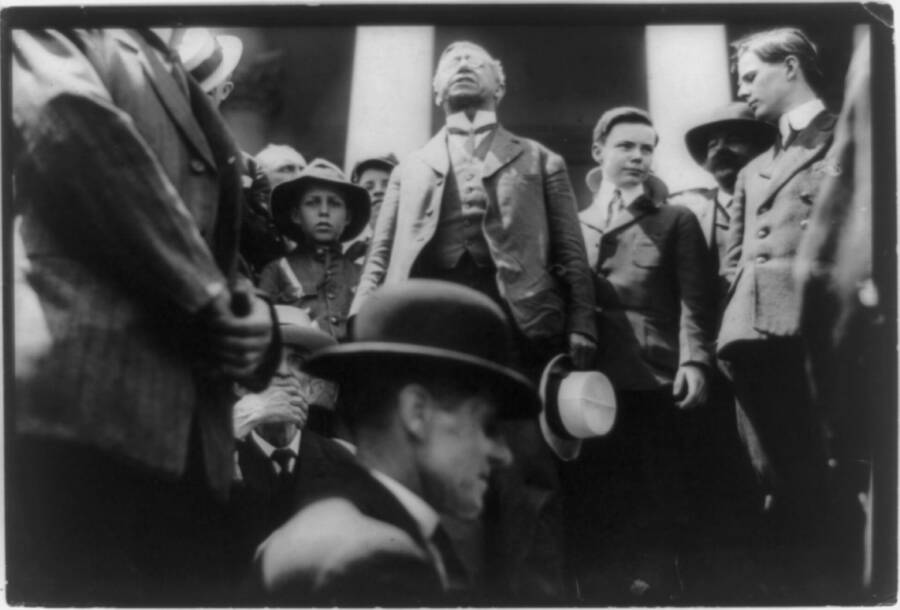 Wikimedia CommonsJacob Coxey delivers an address from the Capitol steps in 1914 during s reboot of his 1894 protest.

Coxey’s Army also survived in popular culture. It is often thought that author L. Frank Baum, who had observed the 1894 march on Washington, based some of the characters in his Wizard of Oz on events of the time; the ragtag band of seekers looking for a redress from the Wizard of Oz, with the Scarecrow representing the American farmer, and the Tin Woodman representing industrial workers, as well as other parallels. While it’s an appealing analogy, the idea that Baum received inspiration from Coxey’s Army did not appear until decades after the book and movie — and Baum never confirmed it.

While Coxey’s Army didn’t achieve what it set out to do at the time, it did begin a national realization that we could, in fact, march on Washington and pressure our elected officials.

A 1994 documentary about Coxey’s Army.

The Civil Rights and Anti-War movements of the 1960s used this method to full effect. Ever since then, publicly protesting this country’s policies and politics has become a solid part of who we are as a country — and will remain so, no matter who occupies the White House or Congress.

After this look at Coxey’s Army, check out how much one of Abraham Lincoln’s still-living relatives looks like his ancestor. Then, learn how the KKK perverted the notion of a march on Washington in 1925.