How Did James Brown Die? Inside The Mysterious Death Of The ‘Godfather Of Soul’

James Brown reportedly died of heart failure in Atlanta on December 25, 2006. But since then, investigators have suspected that he was actually murdered.

James Brown, the “Godfather of Soul,” was one of history’s best showmen. His voice, dance moves, and attitude entranced millions throughout his life and long after his death. But James Brown’s death remains confounding to this day.

Officially, Brown died of heart failure in the early hours of December 25, 2006, in the presence of only his personal manager, Charles Bobbit. He was 73 years old, he had abused cocaine and PCP for most of his life, and his heart finally gave out as a result.

After his death, spectacular memorial services were held at the Apollo Theater in Harlem — where he’d given some of his most iconic performances — and at the James Brown Arena in his hometown of Augusta, Georgia.

Unofficially, though, more than a dozen people who were close to him at one point or another — including the doctor who treated him the night he died — have long suspected there was something more sinister behind his death.

“He changed too fast,” said Marvin Crawford, the doctor who treated James Brown before his death. “He was a patient I would never have predicted would have coded… But he died that night, and I did raise that question: What went wrong in that room?”

First of all, there was never an autopsy. Secondly, rumor has it that a mysterious visitor snuck into his hospital room shortly before he died. Thirdly, a close friend of Brown’s claims to still possess a vial of the singer’s blood all these years later, hoping it’ll prove that he was drugged and killed. Finally, it is not publicly known where his body is today.

And that’s just the beginning of the litany of questions and confusion surrounding James Brown’s death.

The Godfather Of Soul

Born James Joseph Brown on May 3, 1933, in Barnwell, South Carolina, he was born in a one-room shack in the woods. When his parents separated, James Brown was sent to live with his Aunt Honey in Augusta, Georgia. She served as the madam of a brothel.

As a young black man coming of age during the Great Depression, Brown worked whatever odd jobs came his way. 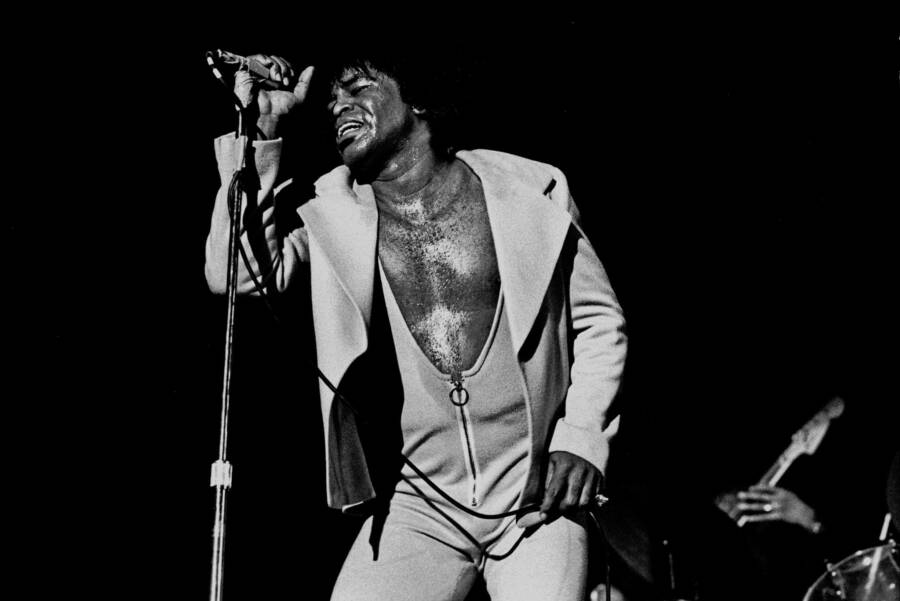 Wikimedia CommonsJames Brown performs at the Musikhalle in Hamburg, Germany in 1973.

“I started shining shoes at 3 cents, then went up to 5 cents, then 6 cents. I never did get to the dime,” Brown later recalled. “I was 9 years old before I got a pair of underwear from a real store. All my clothes were made from sacks and things like that. But I knew I had to make it. I had the determination to go on, and my determination was to be somebody.”

Brown was sent to prison at age 16 for stealing, and he spent the next three years in jail. It was there, during a baseball match, that he met Bobby Byrd. The two singers became fast friends, and in 1953 they formed a musical group called The Famous Flames.

Brown was the group’s standout talent. He toured relentlessly after making hits, and became known as “The Hardest-Working Man in Show Business.”

“When you heard James Brown was coming to town, you stopped what you were doing and started saving your money,” said his saxophonist Pee Wee Ellis. 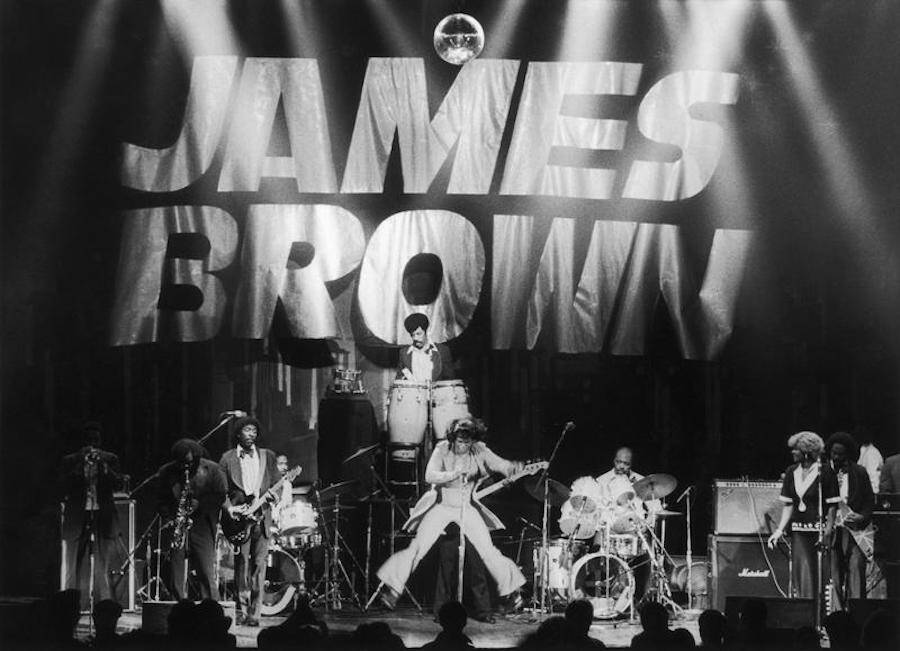 Leon Morris/Hulton Archive/Getty ImagesSeeing a James Brown concert was an event unlike any other. This snapshot from 1985 provides merely a glimpse.

Brown mastered any and all cutting-edge dances, from “the camel walk” to “the popcorn,” but audiences were most amazed when he’d announce he was about to “do the James Brown.” He was such a ruthless professional that he’d actually fine his musicians if they missed a beat.

“You had to think quick to keep up,” one of his musicians said.

It was recording Live at the Apollo in 1962 that immortalized him for good. It became his greatest commercial success and solidified Brown as a mainstream artist with crossover appeal.

But Brown’s personal demons caused him to slide into heavy drug use. He once walked into an insurance seminar while high on PCP and holding a shotgun, then led Georgia authorities on a half-hour police chase in 1988. 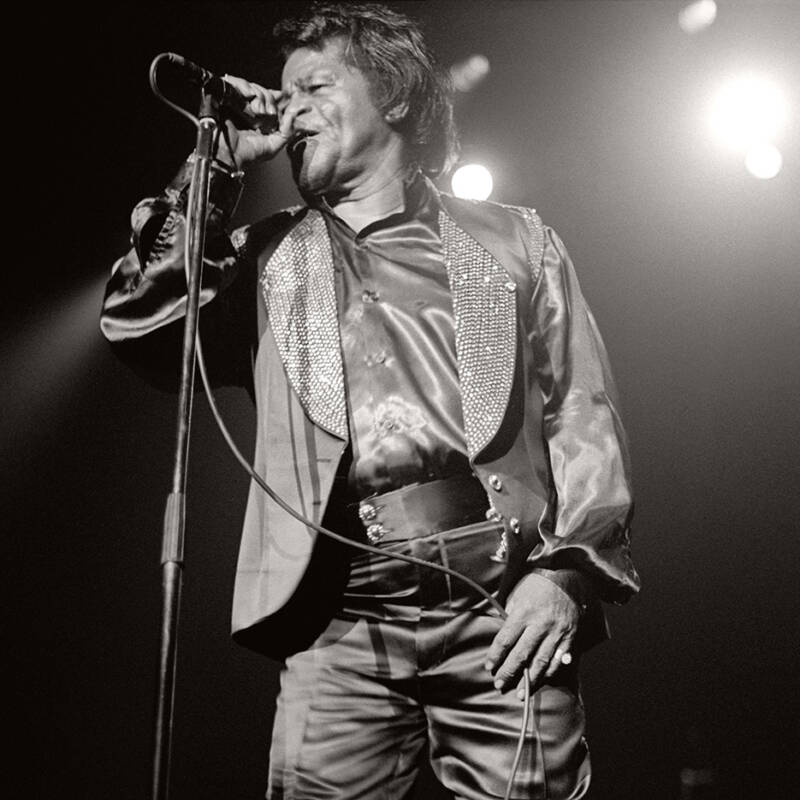 Wikimedia CommonsJames Brown was a draw for audiences around the world well into his 60s.

He fathered at least nine children and had a series of four wives — at least three of whom he physically abused. Brown was arrested for domestic violence as recently as 2004. He died two years later.

The Sudden Death Of James Brown

On December 23, 2006, James Brown was in bad shape. He already had prostate cancer and diabetes, but a lull in his touring schedule made things worse: With nothing to do, 73-year-old Brown turned to drugs.

His good friend, Andre White, was concerned and called his family doctor, Marvin Crawford, an attending physician at Emory Crawford Long Hospital. White and Brown walked into the hospital that day through a back door.

Charles Bobbit, Brown’s manager, later noted that he had been coughing since November. They had toured Europe that fall, but Brown hadn’t complained once about being sick.

AP footage of James Brown’s body arriving at the Apollo Theater in Harlem.

Crawford found cocaine in Brown’s urine and diagnosed him with early congestive heart failure (not pneumonia, as was widely reported at the time). He treated him accordingly.

Brown canceled a couple shows scheduled for the following week, but kept his New Year’s Eve show on the calendar. He was supposed to perform for Anderson Cooper’s New Year’s Eve special on CNN. Unfortunately, he only got worse over time.

The singer reportedly died of heart failure at around 1:45 a.m. on Christmas Day. According to the New York Daily News, Bobbit reported that Brown’s final words were “I’m going away tonight,” after which he took three long breaths and passed away.

His funeral on Dec. 28 was as sorrowful and celebratory as some of Brown’s best work. Brown’s 24-karat-gold casket was transferred from a hearse in front of Rev. Al Sharpton’s House of Justice on 145th Street in Harlem to a white carriage drawn by horses with plumes on their heads.

Rev. Al Sharpton and Michael Jackson speak at the funeral of James Brown.

There was no better place than Harlem’s Apollo Theater for the occasion. This is where he made his mark, and where grieving fans could now make peace with his passing. The crowd chanted “soul power” as the procession moved from outside into the venue.

Two days later, at another memorial in Augusta, Georgia, Michael Jackson and Jesse Jackson spoke while ex-Temptations member Ollie Woodson performed and MC Hammer looked on from the audience.

“He was about respect for himself and his people,” said Olivio Du Bois, great-grandnephew of W.E.B. Du Bois. Of Brown’s 1968 song “Say It Loud (I’m Black and I’m Proud)”: “That was it right there. He didn’t really need to say any more.” 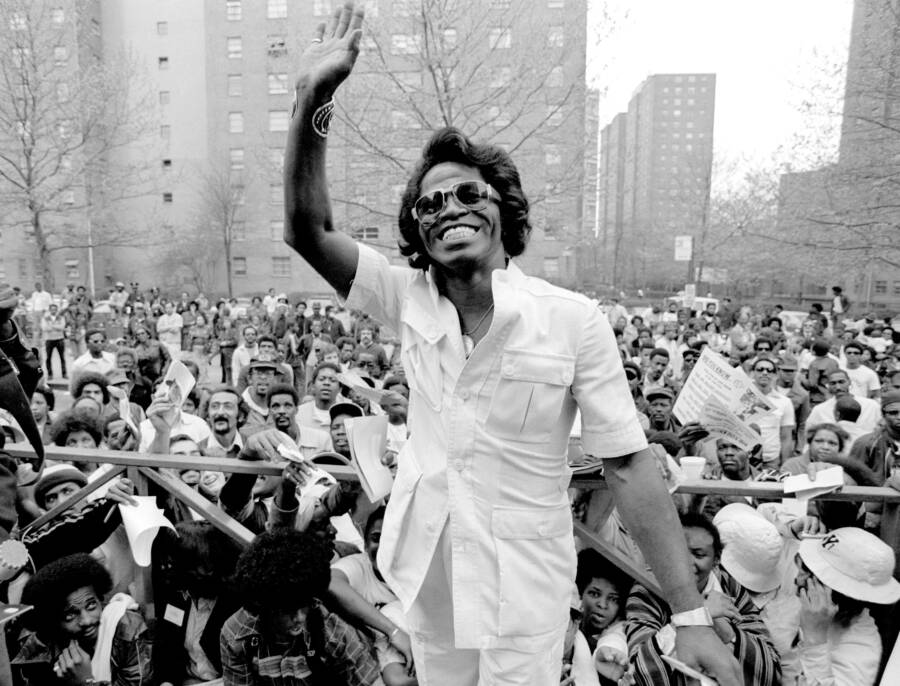 Richard E. Aaron/RedfernsBrown loved Harlem, as the community was home to his early days and breakthrough record, Live at the Apollo.

“Others may have followed in my wake, but I was the one who turned racist minstrelsy into black soul — and by doing so, became a cultural force,” Brown wrote in his memoir. “As I always said, if people wanted to know who James Brown is, all they have to do is listen to my music.”

The Cause Of Death: Was James Brown Murdered?

“There are legitimate questions about James Brown’s death that can only be answered by an autopsy and a criminal investigation,” wrote CNN reporter Thomas Lake. Many of James Brown’s friends feel the same way.

Rev. Al Sharpton has admitted that he believes there may be more to the death than the official story: “I’ve always had and still have questions.”

At the time, a lot of those questions went to Bobbit, Brown’s personal manager, who was supposed to look after Brown while Crawford spent Christmas Eve at home.

Bobbit claimed that he left Brown’s room that night to get him a dietary supplement. He returned, gave it to Brown, and Brown then quickly deteriorated after that. 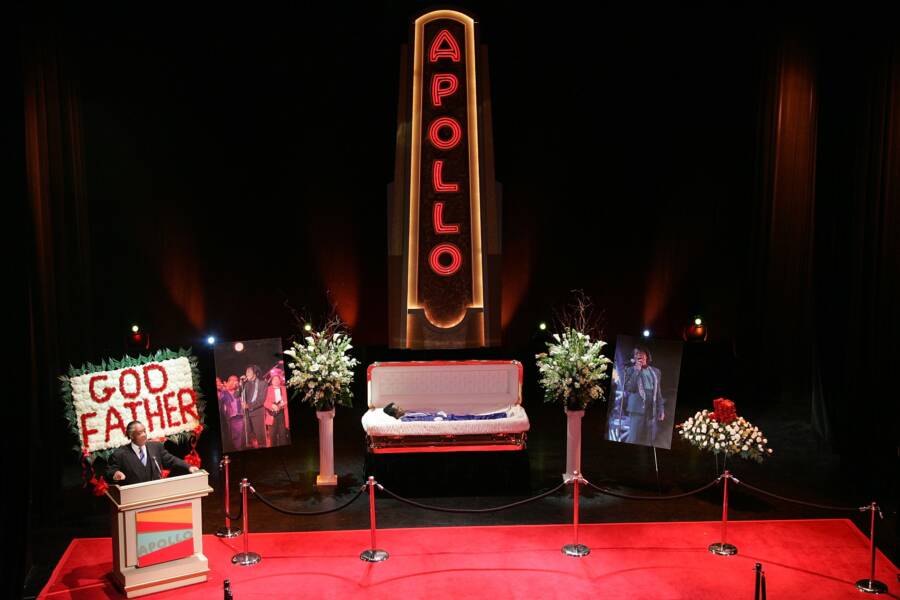 Bryan Bedder/Getty ImagesRev. Al Sharpton speaks as the body of James Brown rests onstage at the Apollo Theater on December 28, 2006.

Several people in Brown’s orbit have always thought Bobbit was hiding something. Another one of his managers named Frank Copsidas said, “The story was always a little vague.” Meanwhile, Brown’s friend Fannie Brown Burford said plainly, “Knew he was lying right off.”

Marvin Crawford, the doctor who signed Brown’s death certificate in 2006, has also admitted that he was suspicious of how quickly Brown deteriorated.

Crawford said, “Somebody perhaps could have given him an illicit substance that led to his death.”

Crawford said he had just treated Brown on Dec. 23 for a mild heart attack, and that “[Brown] improved fast. Boom boom boom… by 5 o’clock on the 24th, I mean, he probably could have walked out of the hospital if he had wanted. But we wouldn’t let him go. We wouldn’t tell him to go yet.”

A CBS 46 Atlanta news segment on the 2020 developments regarding James Brown’s cause of death.

Some suspect that a mysterious visitor may have visited Brown in the room when he was all alone. Andre White, Brown’s friend who brought him to the hospital, claimed that a nurse told him that moments before Brown died, he’d been visited by a man she didn’t recognize as part of his entourage.

White also said that the nurse told him there was drug residue in Brown’s endotracheal tube. She extracted some of Brown’s blood and gave it to White, who kept it in case it was ever needed for an investigation.

That blood still apparently remains to be tested, but Lake’s investigation did reveal a cocktail of drugs on the bottom of a shoe belonging to Brown’s hairdresser, Candice Hurst, with whom he was having an affair with before he died. 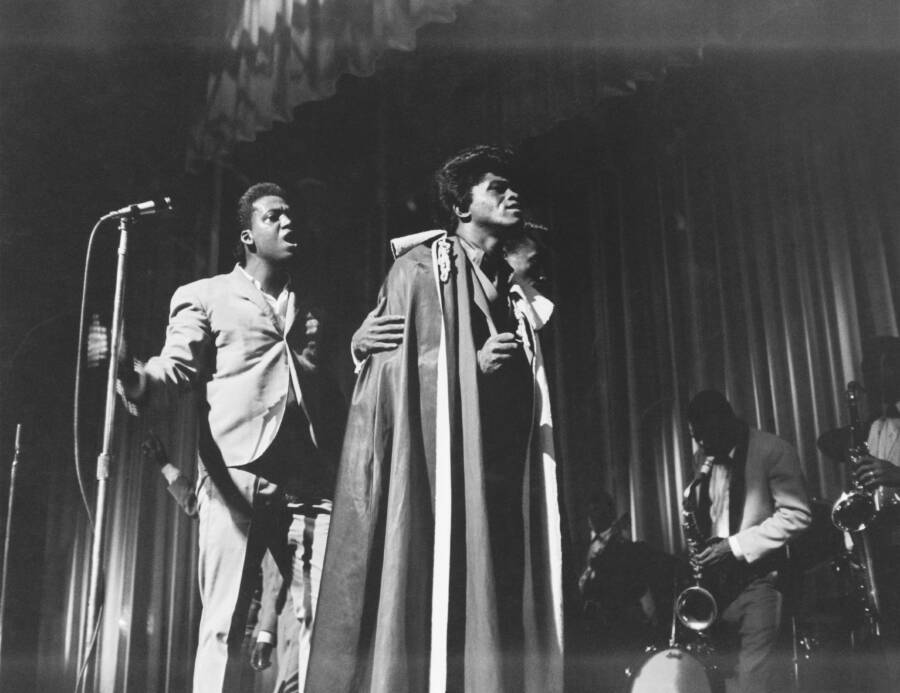 Michael Ochs Archives/Getty ImagesJames Brown would famously throw his cape off after pretending to wander off stage, only to explode with energy again.

The shoe contained traces of marijuana, cocaine, and a prescription drug called Diltiazem, which is used to treat high blood pressure and chest pain.

Hurst says she could have stepped on a Diltiazem pill in Brown’s bedroom, but Crawford remembers prescribing Diltiazem to Brown at the hospital. Was Hurst at the hospital with Brown? Did she give him drugs?

We don’t know. In order to get closer to the answer to how James Brown died, there would need to be an investigation as well as an autopsy of Brown’s remains — wherever they may be.

“It fits our picture of being highly suspicious that somebody perhaps could have given him an illicit substance that led to his death,” said Crawford. “We can’t say who or what, but that was always our suspicion. I had to say it quietly… but I wouldn’t say it no more. Because I can’t say.”

After learning about the death of James Brown, read about the mysterious death of Marilyn Monroe. Next, check out these heartbreaking photos of Princess Diana’s funeral.