During the Second Sino-Japanese War, a Japanese newspaper reported on the barbaric killing competition as though it were a sporting event. 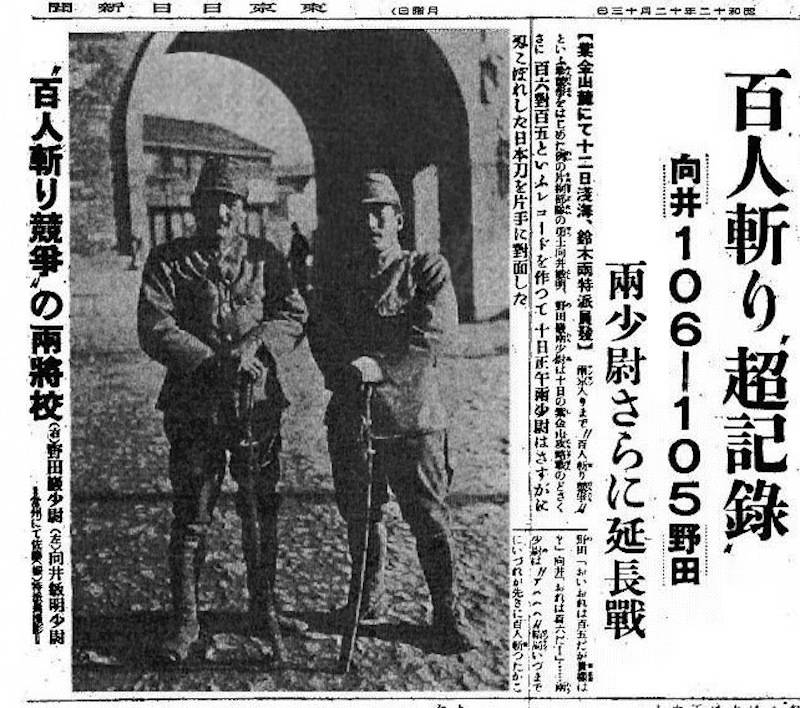 Wikimedia CommonsAn article reporting on the “Contest to Cut Down 100 People.”

In 1937, during the Second Sino-Japanese War, the Empire of Japan invaded China, and for the next eight years, committed horrific atrocities against the civilian population. But while the international press was reporting on the brutality of Japanese troops, newspapers in Japan were looking for stories of wartime heroism. One of the stories they quickly settled on was that of two officers and an unusual contest.

Just after the start of the invasion, the Osaka Mainichi Shimbun ran an article titled “Contest to kill 100 People using a sword.” As the article explained, two officers, Tsuyoshi Noda and Toshiaki Mukai, had settled on a private competition to see which of them could be the first to kill 100 enemy soldiers with their katanas. By the time the paper first reported the story, the competition was already fierce.

“Since leaving Wuxi,” the paper reported, “one has already killed fifty-six men, and the other has succeeded in killing twenty-five.” Over the next few days, the paper followed the two soldiers, keeping careful track of their scores. “Second Lieutenant N broke into an enemy pillbox…[and] killed four enemy,” the paper continued, “When Second Lieutenant M heard this, he invaded an enemy camp at Henglinzen…and laid fifty-five enemy low with his sword.” 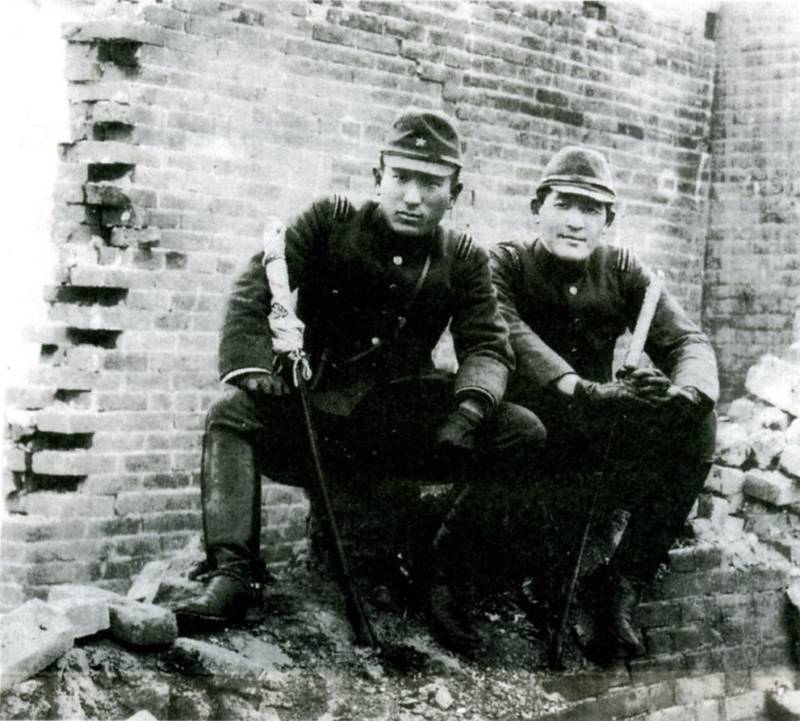 Meanwhile, the paper was following the results of the contest as though it were a sporting event. Reporters caught up with the Lieutenants just after the army left Danyang. “It’s 89-78 in the ‘Contest To Cut Down A Hundred,’ A Close Race, How Heroic!,” the headline read. While neither Mukai (89) nor Noda (78) had realized their goal of reaching 100 by the time they reached Danyang, they would have plenty of opportunities to kill in Nanking. 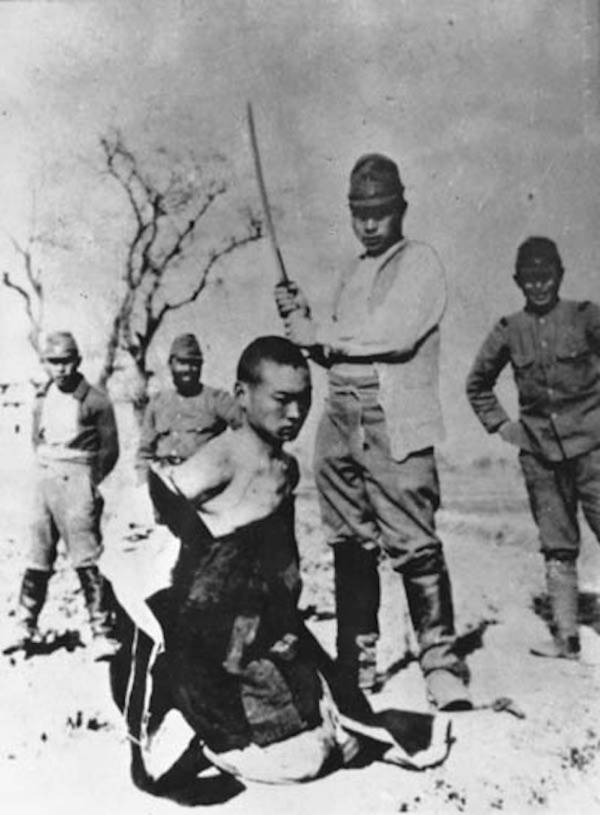 The reporters who caught up with Mukai and Noda didn’t report on the massacres, of course, but they noted that both men had already passed their goal. Noda had reportedly killed 105, while Mukai had killed 106. Neither man seemed to think much of killing so many people. Although Mukai was apparently a bit upset about some damage to his sword, which was “marred because I sliced someone down the middle, together with his helmet.”

In the frenzy of killing in Nanjing, neither was sure who had passed the 100 mark first. So, the lieutenants cheerfully agreed to extend the contest to 150. But while the papers in Japan presented the two men as cutting down enemies armed with guns, the truth was far less heroic. In fact, Mukai and Noda were largely killing defenseless prisoners.

“Actually, I didn’t kill more than four or five people in hand-to-hand combat. We’d face an enemy trench that we’d captured, and when we called out “Ni, Lai-Lai!” (You, come on!), the Chinese soldiers were so stupid, they’d rush toward us all at once. Then we’d line them up and cut them down.”

In fact, there’s some doubt about whether the account of the contest is even accurate. Many have argued that the numbers involved were probably inflated. Some have even claimed that it never happened at all. Noda himself claimed that there was a contest, but that it wasn’t as big a deal as the newspaper made it out to be. 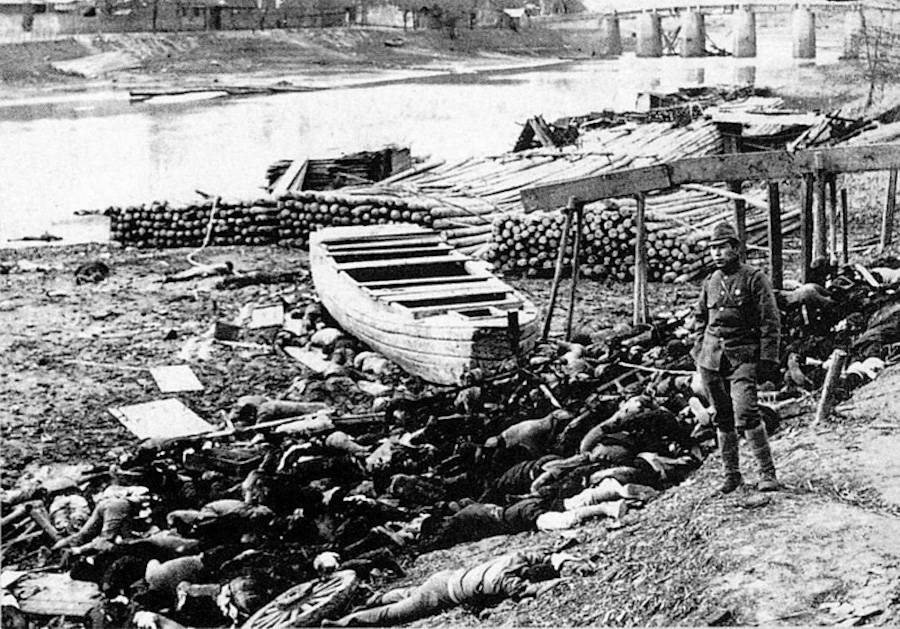 Moriyasu Murase/ Wikimedia Commons.Bodies stacked by a river during the Nanking Massacre.

Ultimately, both men were tried and executed as war criminals after Japan’s defeat. But in 2003, the families of Mukai and Noda sued the newspaper that reported on the contest. They argued that the episode was completely invented and that it damaged the reputations of the two lieutenants. However, the court disagreed, saying, “the contest did occur, and was not fabricated by the media.”

Since the war, the contest and the subject of the Japanese massacres in China, in general, have been hotly disputed. Many right-wing nationalists in Japan are quick to dismiss any accounts of Japanese soldiers killing civilians in China as lies. But there’s little doubt that the contest itself did take place and was part of a wider pattern of cruelty on the part of the Japanese towards Chinese prisoners.