Far from signifying the end of slavery and racism, the Civil War's finish only initiated a new wave of discrimination: Jim Crow.

Mom and apple pie are like baseball and the Cuban blockade—traditional American institutions that define us as a people and give our history much of its unique look and feel. But America has other, less savory traditions, and one of the worst—sadly, not the worst—was segregation.

The name “Jim Crow” was first used for a stock character in depressingly popular minstrel shows from around 1830 to the 1940s. After the Civil War and the attendant ratification of the Thirteenth and Fourteenth Amendments, which officially made everybody equal, the name was applied to a set of laws that excluded nonwhites from mainstream society and created a primarily black underclass that was kept in its place via a nationwide campaign of bullying, intimidation, and blood-curdling violence.

Everything in this slideshow is horrible, and if it disturbs you—good. Don’t let it happen again. 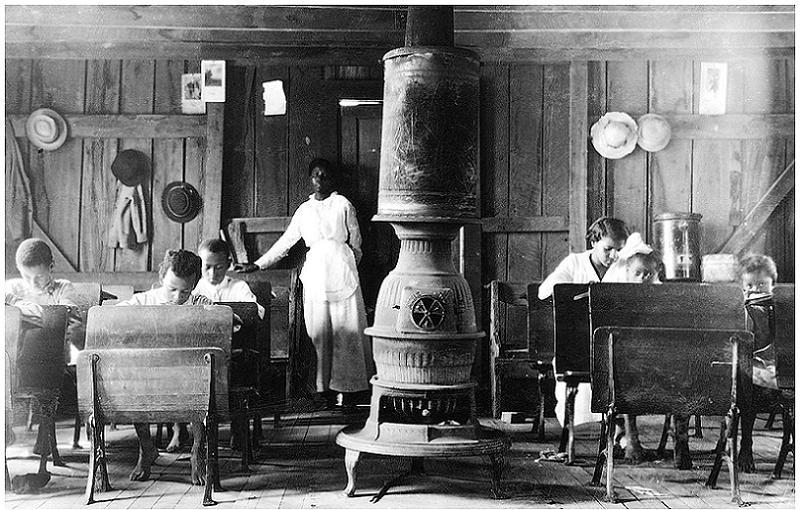 Immediately after the Civil War, United States culture and legal practice shifted dramatically against the racism that had propped up slavery. The federal Freedman's Bureau operated schools like the one pictured here, encouraged voter registration, and worked to reunite families that had been sold and separated under slavery. Source: Trinity History 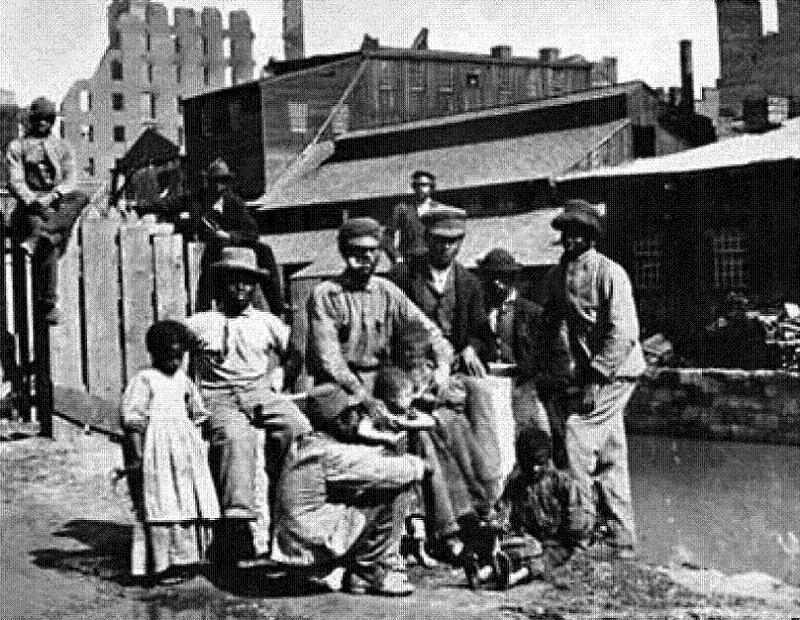 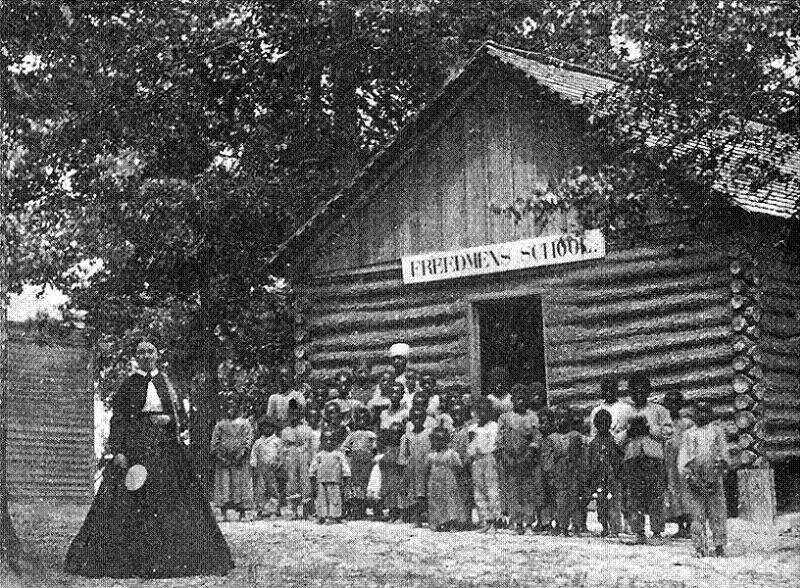 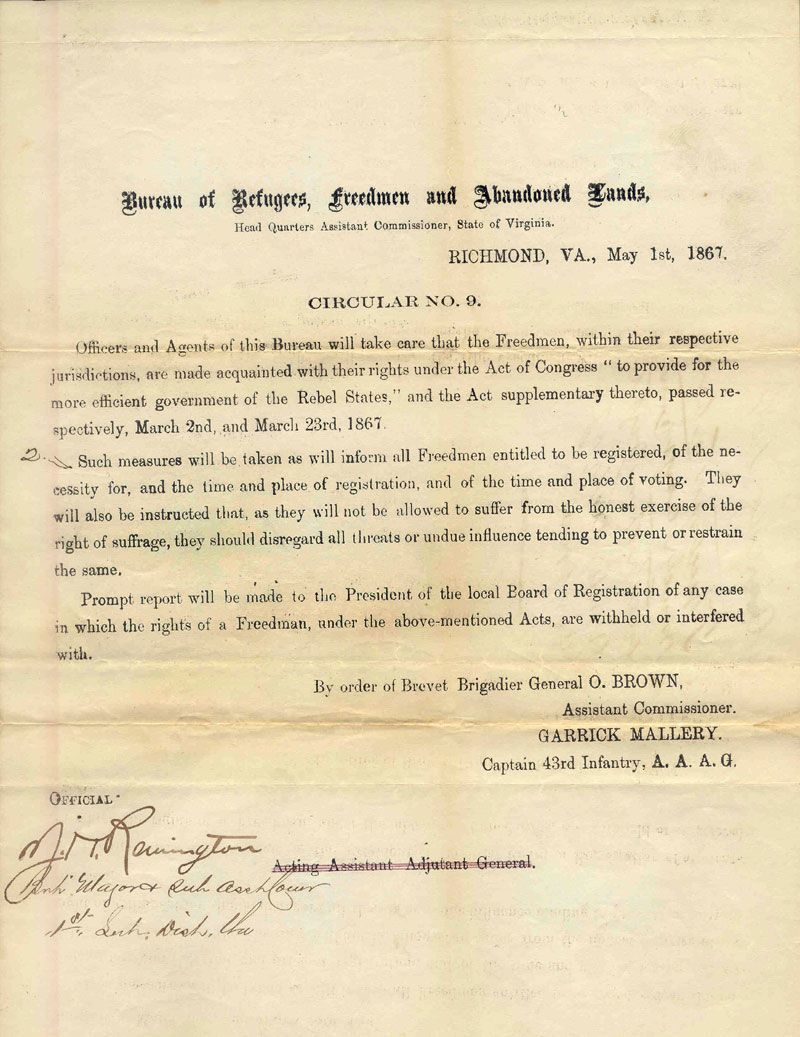 This is a public notice of the government's intent to ensure the voting rights of freedmen, posted in Virginia in 1867. It notes that, as the right to vote applies to all men, no notice should be taken of threats leveled against them by those who would try to suppress the black vote. Source: Social Welfare History 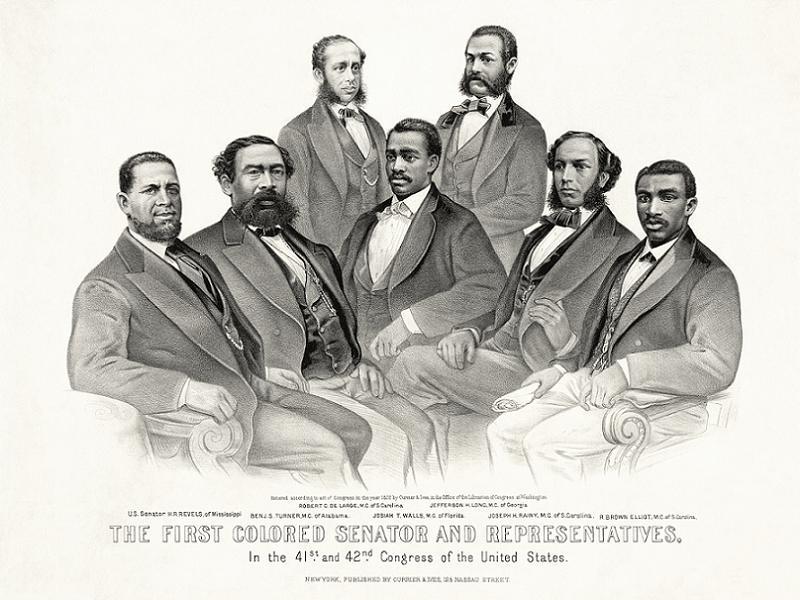 The first Congressional Black Caucus. Each member was elected or appointed during Reconstruction. In case you're wondering, as of 2014 the US Senate has two African-American members. Source: Wikipedia 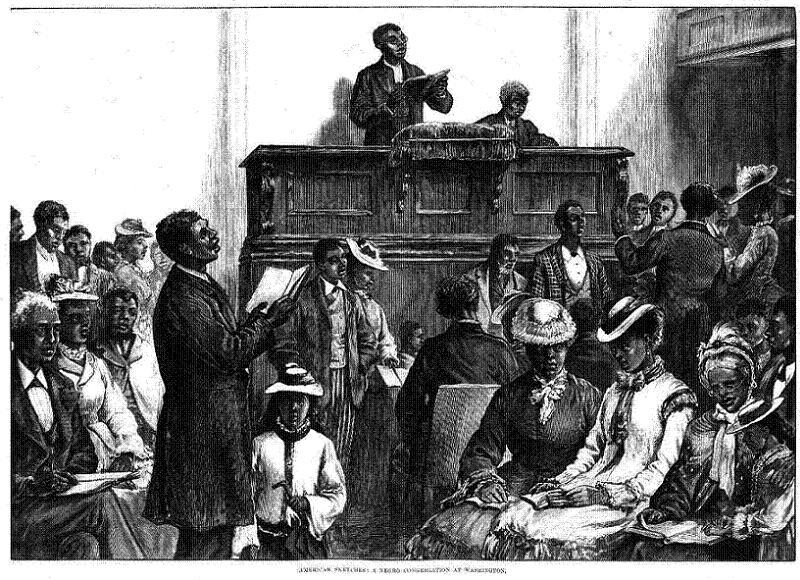 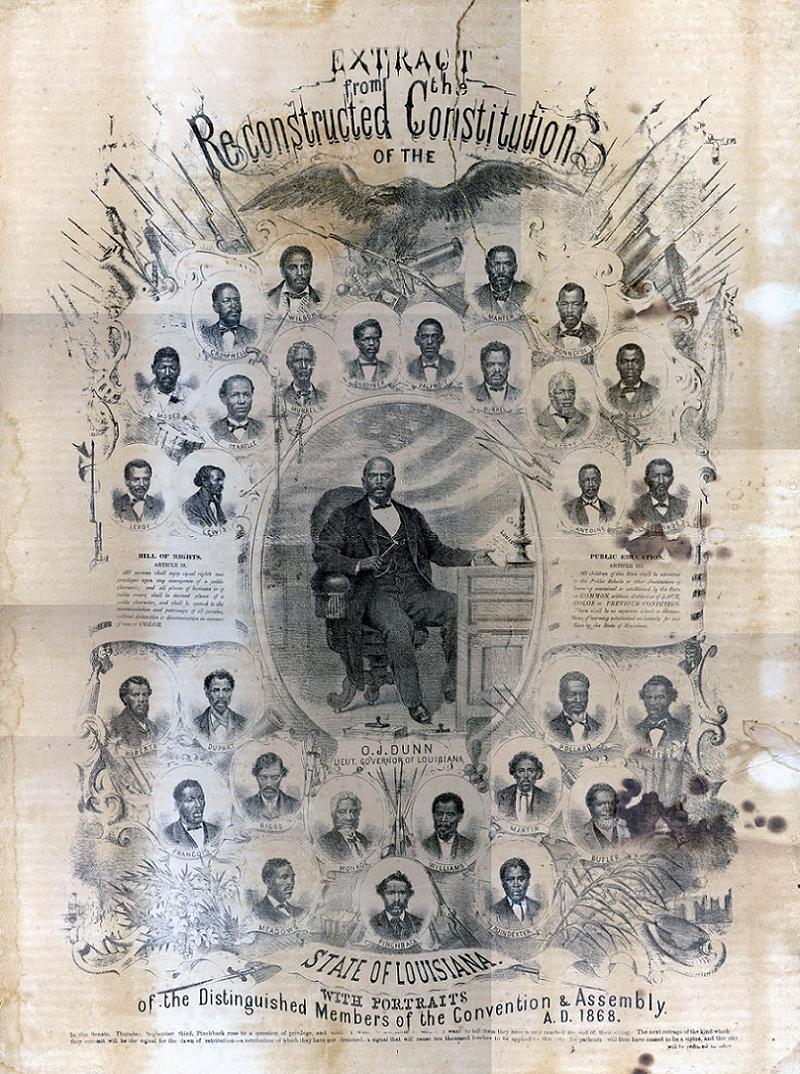 Black Republicans in 1868. No jokes, please, about how membership has declined since then. Source: Blogspot 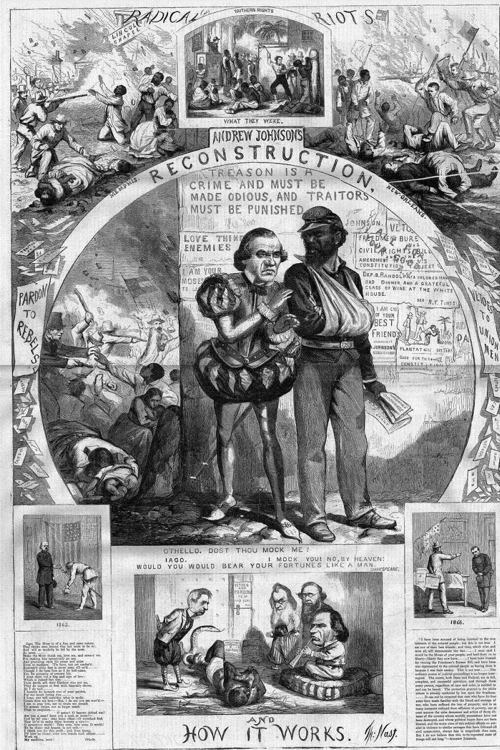 The racial aspect of Reconstruction drew a lot of heat from racist dicks in both the North and the South. This 1866 poster by Thomas Nast lampooned the broken promises of the Johnson Administration, which all but turned a blind eye to the undoing of the Civil War Amendments by unreconstructed confederates. Remember that date, it will be important later. Source: PBC History Online 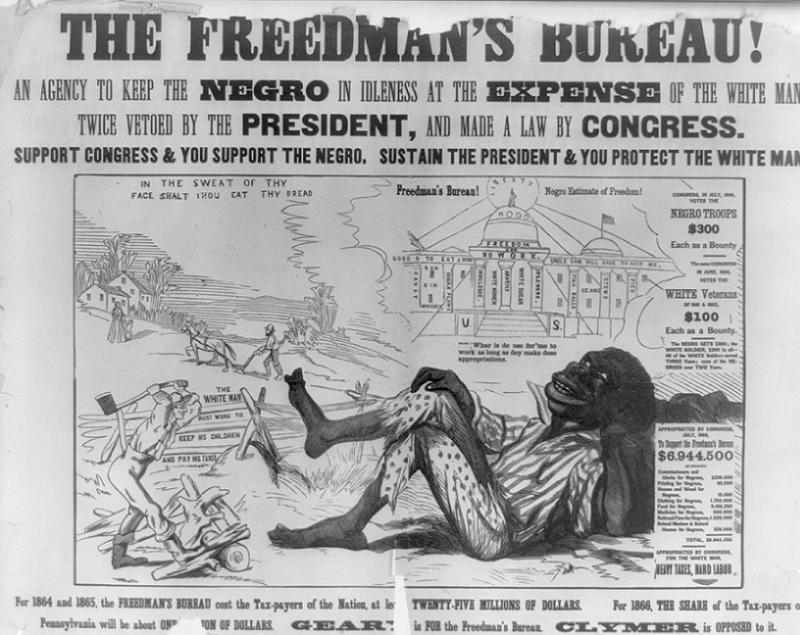 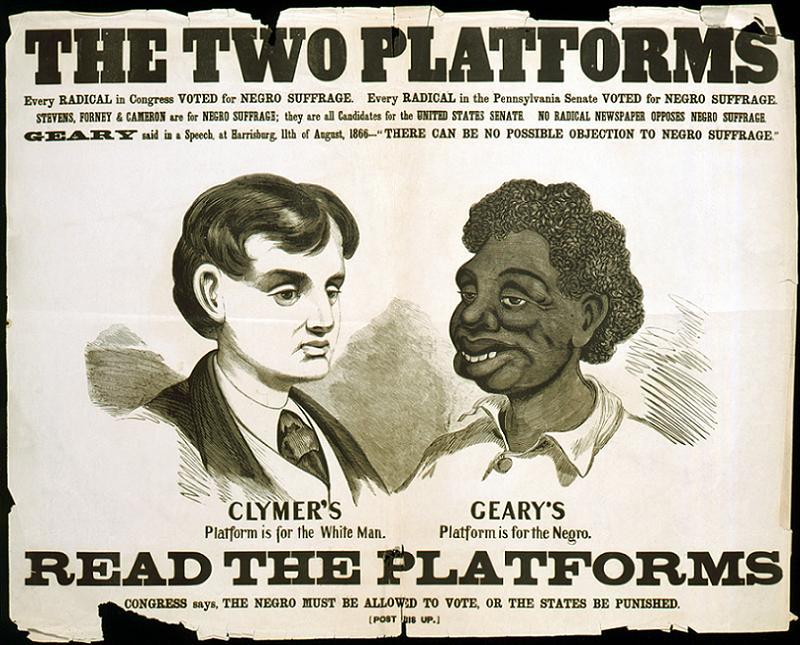 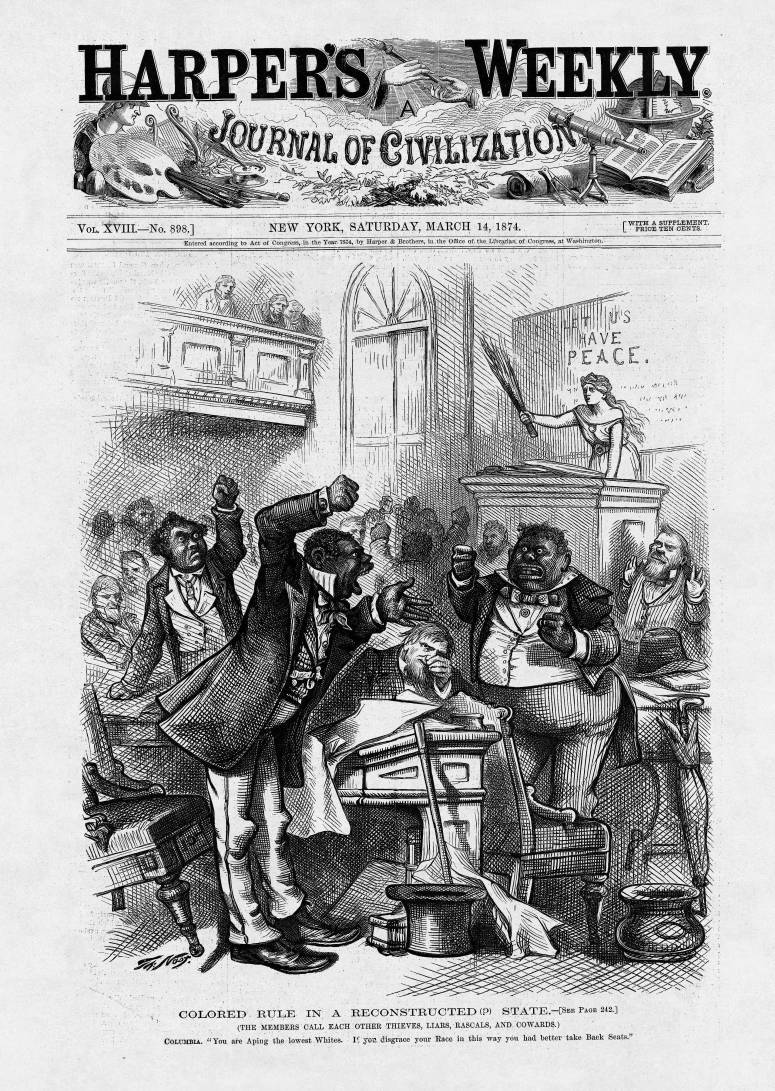 Remember how, back in 1866, Thomas Nast had been all for getting serious about Reconstruction? Here he is eight years later, depicting black legislators as do-nothing incompetents. The caption reads: "Colored Rule in a Reconstructed(?) State" The noose was beginning to tighten. Source: Harp Week 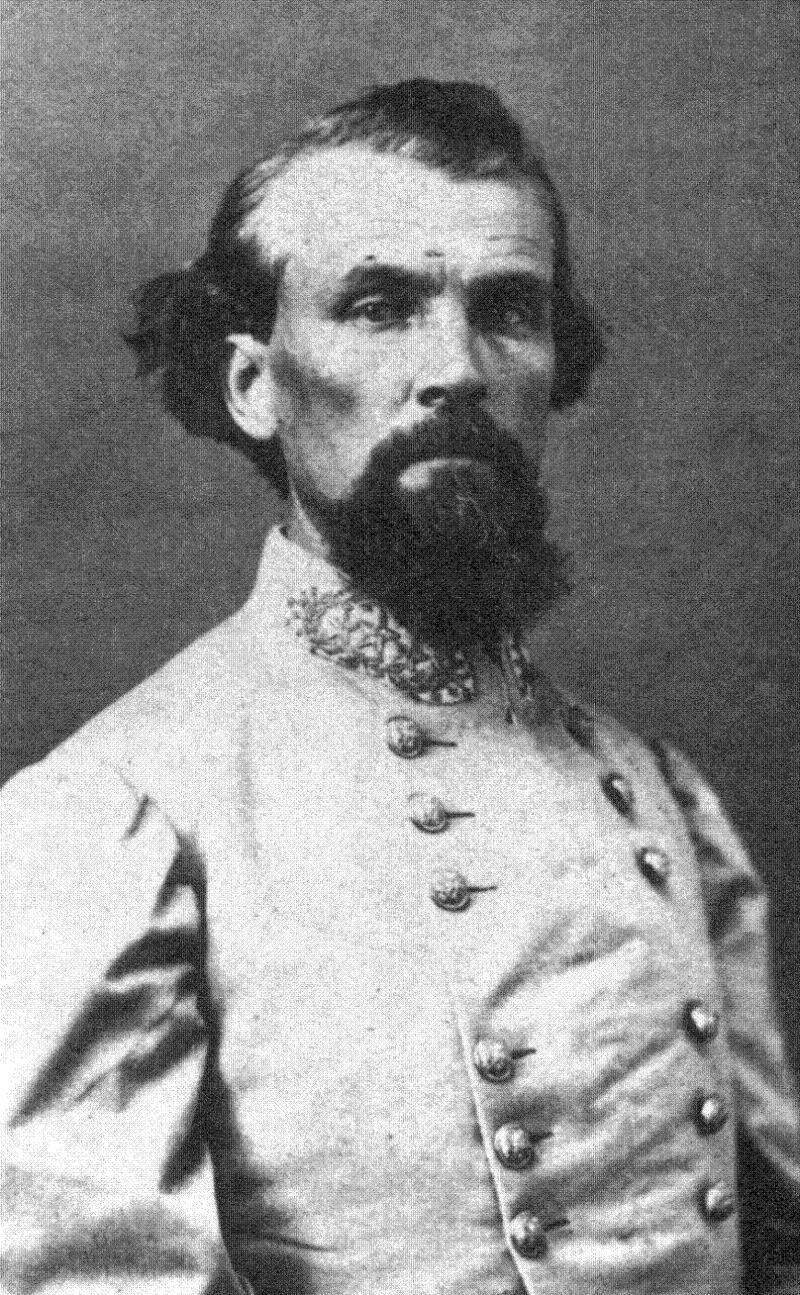 Nathan Bedford Forrest. Confederate cavalry general, military genius, former slave trader and all-around evil shit. He had 30 horses shot out from under him during the war and killed 31 Union soldiers. After his side lost, Forrest and a few close friends founded the Ku Klux Klan and carried out a guerrilla war to undo every gain Emancipation had brought. Source: Wikipedia 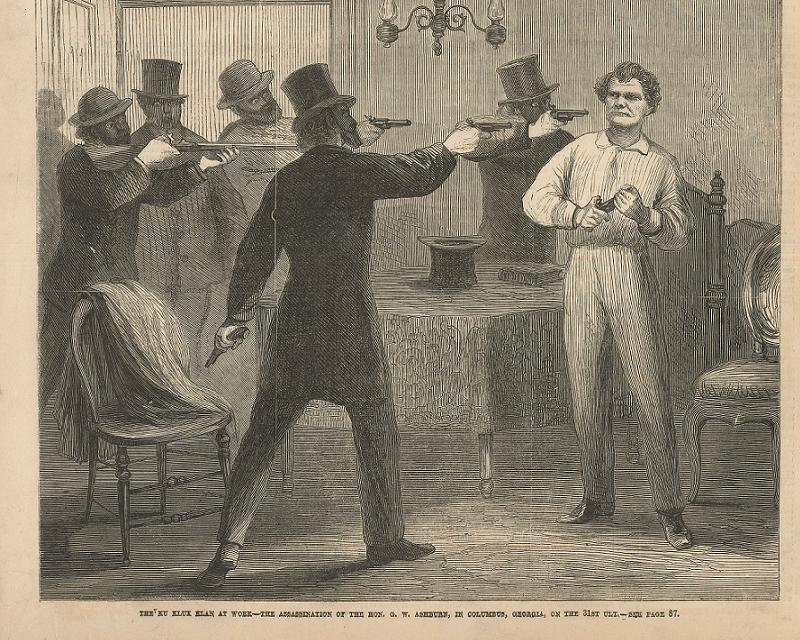 Remember those "political meetings" Rhett and Ashley went to in Gone With the Wind? They were Klan meetings. After Nathan Bedford Forrest swung through Georgia to organize the KKK, several assailants ambushed George Ashburn, a native Georgian and civil rights crusader who was serving as a judge in Columbus, GA. He was the first man to be murdered by the Klan in Georgia. Source: Wikipedia 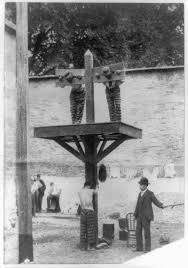 With fewer and fewer non-racist whites, and an ever-dwindling population of politically active blacks, the South turned to draconian means to reverse the tide of Reconstruction. Laws were passed that enforced white supremacy, and those laws were enforced with savagery. Here are prisoners being punished for God knows what around the turn of the century. Source: Blogspot 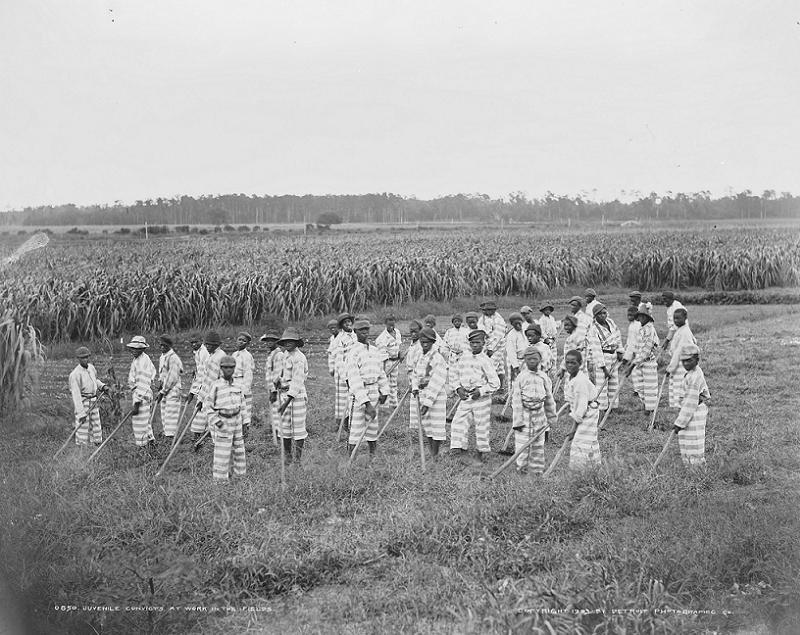 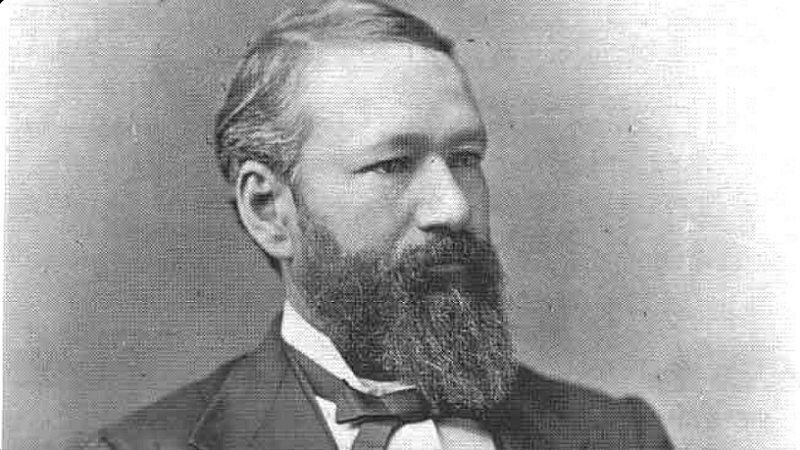 The watershed moment in the hardening of Jim Crow came in 1896, with the Supreme Court decision in Plessy vs. Ferguson. Homer Adolph Plessy, also known as "that really white-looking guy who maybe has one black great-grandparent," was arrested for sitting in a white-only train carriage in Louisiana. Source: Gallery Hip 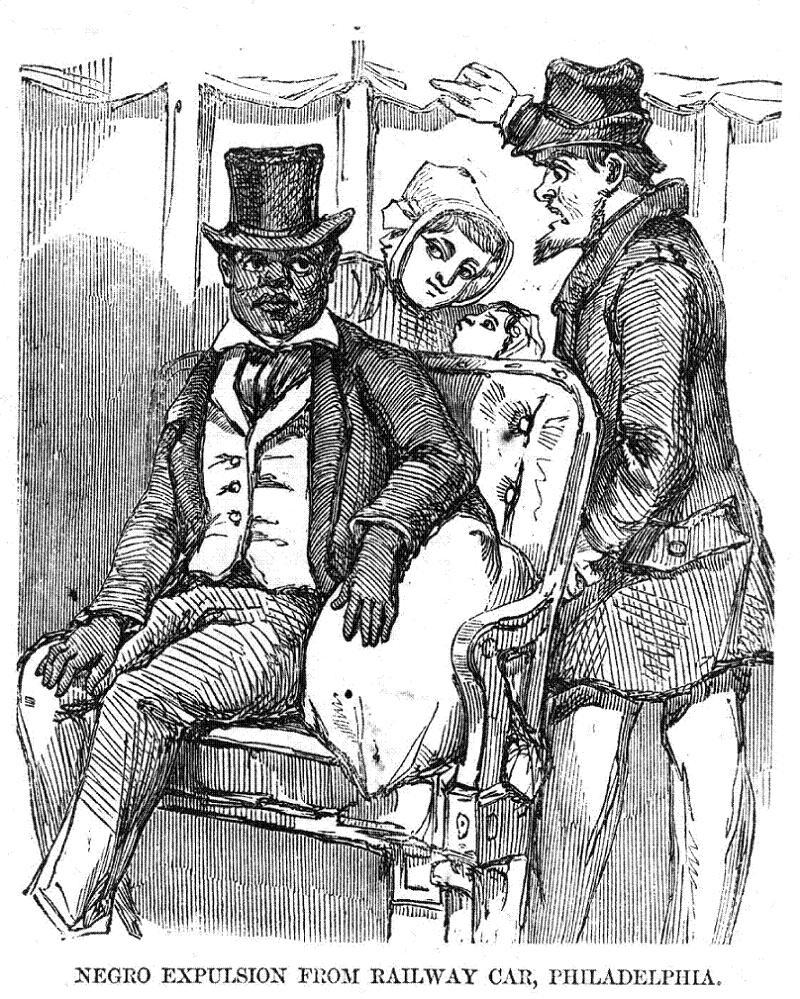 After the Court gave its blessing to the legal principle of "separate but equal," the gates had opened for segregation to become the law across the country. Source: Maryland Government 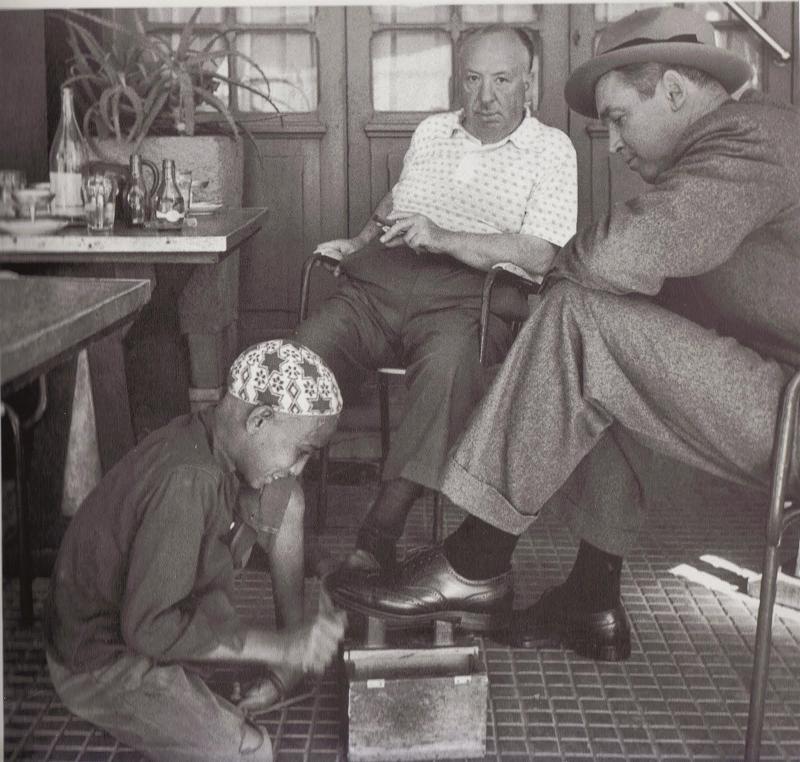 The rules of segregation were simple: in every context where blacks and whites came into contact with each other, a clear hierarchy must be present. The races mingled very closely during the Jim Crow years, and sometimes intimately, but always in a superior-subordinate relationship. Anyplace where there might be a suggestion of equality, such as at a swimming pool or on a bus, called for strict separation. Source: Chattanoogaville 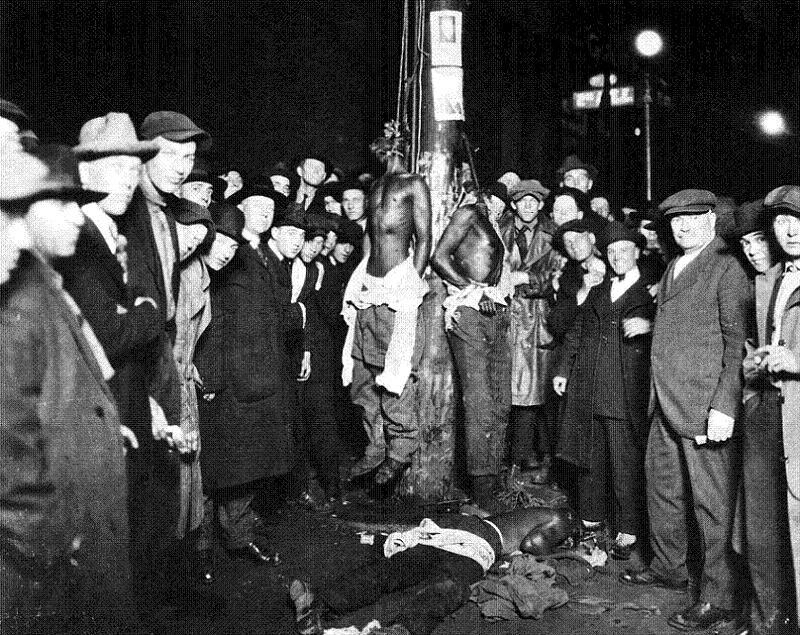 Violations of those rules merited punishment. There is only one kind of punishment handed out by angry mobs—lynching. According to Tuskegee University, since 1882, 4,733 people are known to have died due to lynching, with the last known lynching taking place in 1968. This lynching happened in Duluth, in case you thought Southerners were the only bad guys here. Source: Wikipedia 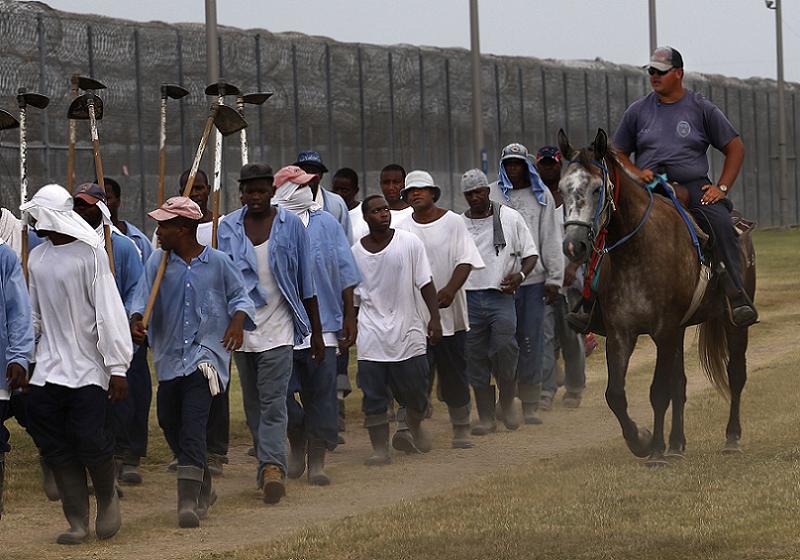 Thankfully, everybody eventually came to their senses. Today, getting caught with crack only earns 18 times the prison time powdered cocaine gets, rather than the 100:1 ratio from before 2010. And African-Americans are only 8.2 times more likely to be in prison than whites. Also, black inmates are only the majority of actually-executed death row residents, rather than the vast majority, so you can see that those bad old Jim Crow laws finally came to an end and everybody lived happily ever after.