Because no autopsy was ever performed, the truth about how Jim Morrison died in his Paris bathtub at age 27 has remained murky for decades.

On July 3, 1971, rock icon Jim Morrison died at age 27 in Paris. The untimely demise of The Doors frontman stunned the world and left his fans devastated. But the questions surrounding Jim Morrison’s death have endured far longer than the short time he spent on Earth.

Officially, he was found dead in a bathtub in Paris by his girlfriend Pamela Courson. French officials said that Jim Morrison’s cause of death was heart failure — without conducting an autopsy. Before the world knew what had happened, he was quietly laid to rest in Paris’s Père Lachaise Cemetery.

To some, it seemed like a sad end to a long downward spiral. Morrison had struggled with fame and addiction for years. After allegedly exposing himself at a Florida concert in 1969, Morrison had been found guilty of indecent exposure and profanity — charges that he denied. Fed up with the perils of stardom, Morrison and Courson had moved to Paris in March 1971. 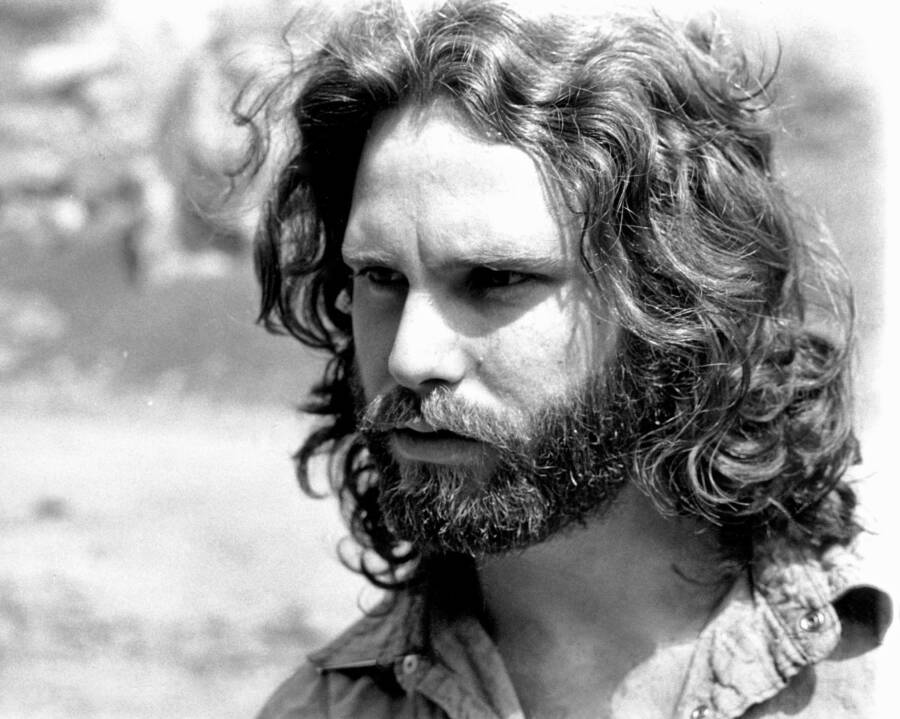 There, Morrison seemed to find peace. He wrote every day. To friends, Morrison appeared happy and healthy. And in photos taken during his final days alive, he looked trim and fit. And so it came as a shock to most when Morrison died suddenly on July 3rd. But not everyone was surprised.

While in Paris, Morrison and Courson had apparently indulged in old habits. They also frequented Parisian nightclubs like Rock’n’Roll Circus. And eerily, some claim that Morrison actually died at that very same club rather than his apartment — and that a massive cover-up followed for decades.

This is the story of Jim Morrison’s death — both the official account and what witnesses claim actually happened.

Listen above to the History Uncovered podcast, episode 25: The Death of Jim Morrison, also available on Apple and Spotify.

The Years Leading Up To Jim Morrison’s Death 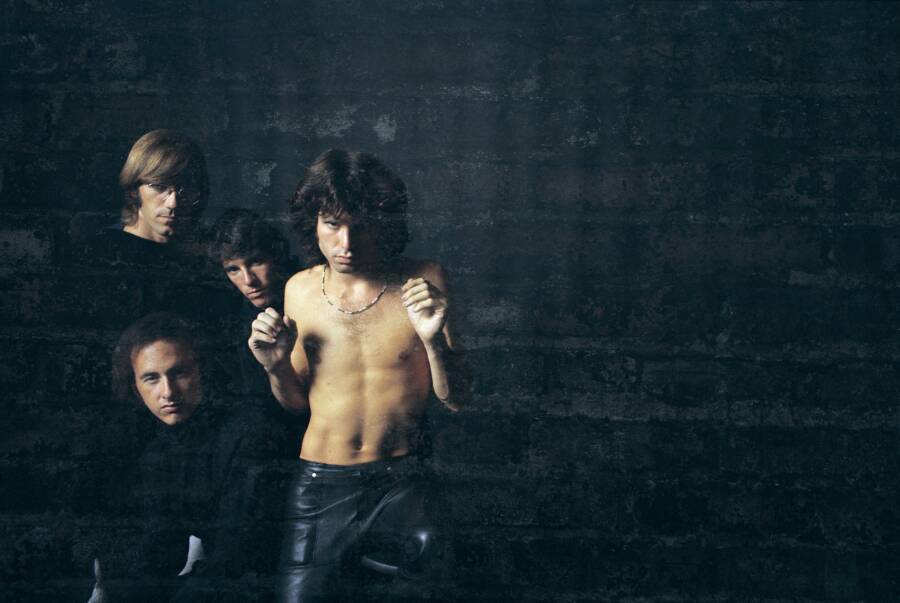 Mark and Colleen Hayward/Getty ImagesJim Morrison and The Doors posing for their 1967 debut album cover.

Born on December 8, 1943, Jim Morrison seemed an unlikely character to become a rock star. The son of a future U.S. Navy Rear Admiral, Morrison grew up in a strict household. But it didn’t take long for him to rebel.

Although he kept his grades up and liked to read and write, Morrison also experimented with alcohol at a young age. When he graduated high school, he reluctantly went to college at UCLA and only stuck around to graduate because he wanted to avoid getting drafted to fight in the Vietnam War.

But once Morrison was free in the world, he turned to music. He spent his days after graduation in 1965 writing lyrics, doing drugs, and hanging out in the California sunshine. He also assembled a band with three others that they called The Doors, inspired by a William Blake quote: “There are things that are known and things that are unknown; in between are doors.”

That same year, he also met Pamela Courson, who would become his longtime girlfriend and muse. Morrison called her his “cosmic partner.” 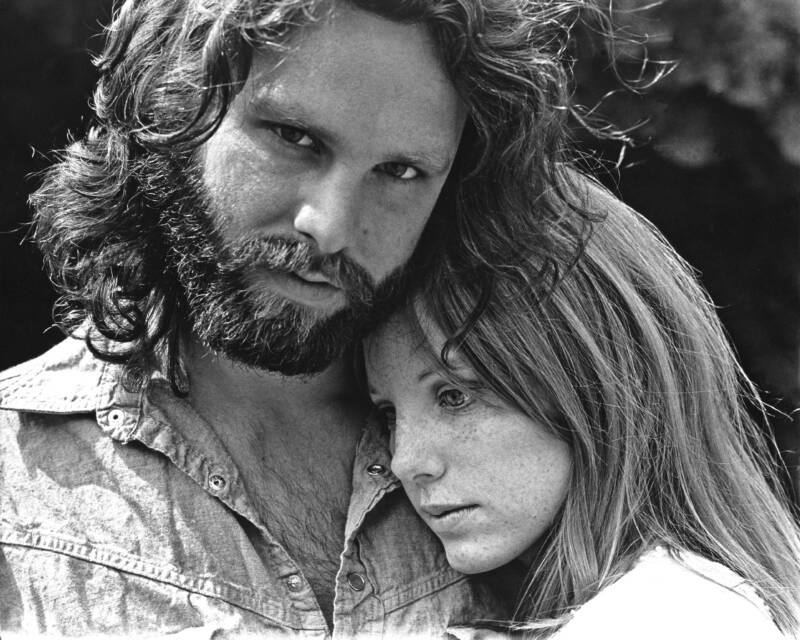 Meanwhile, Morrison’s father disapproved of his career path. He urged his son to “give up any idea of singing or any connection with a music group because of what I consider to be a complete lack of talent in this direction.”

But just two years after the band formed, they released their first hit record — “Light My Fire” — which shot to No. 1 on the Billboard Hot 100. From there, the Doors seemed practically unstoppable. They released album after album, hit after hit, and drove rock ‘n’ roll fans into a frenzy.

Though Morrison enjoyed many of the perks of being a rock star — especially the attention from countless women — he also struggled with his newfound fame. He had always been a heavy drinker, but he began to hit the bottle more and more frequently. And he also indulged in a variety of drugs. 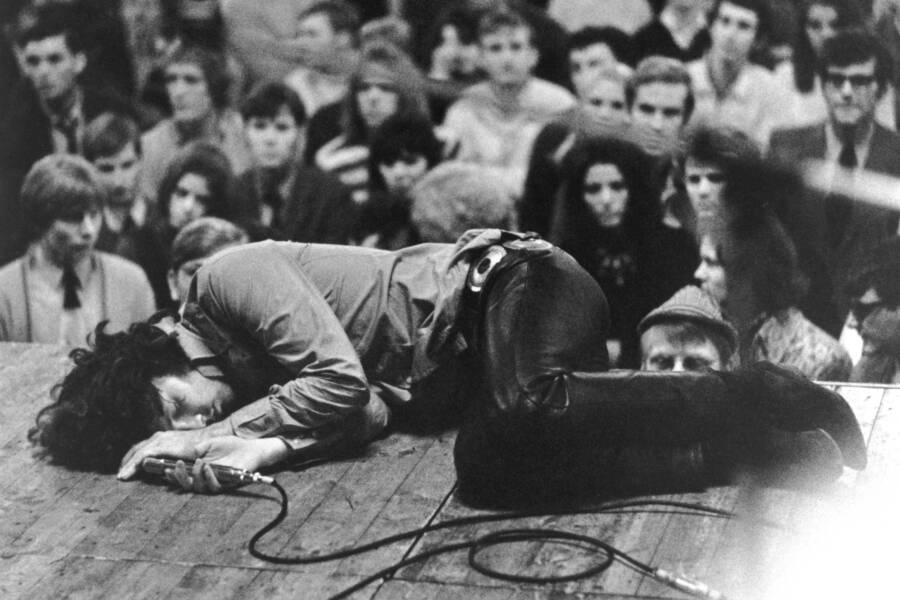 Everything came to a head for Morrison after he was charged with exposing himself during a Florida concert in 1969. As he sat through his trial in 1970, Morrison knew he needed a change. In one of the notebooks he carried around, he jotted down a note: “The joy of performing has ended.”

Soon after he was released on bond, Morrison left The Doors. He and Courson then moved to Paris, hoping for a reprieve. But sadly, Jim Morrison’s death was just around the corner — and he would never make it back home. 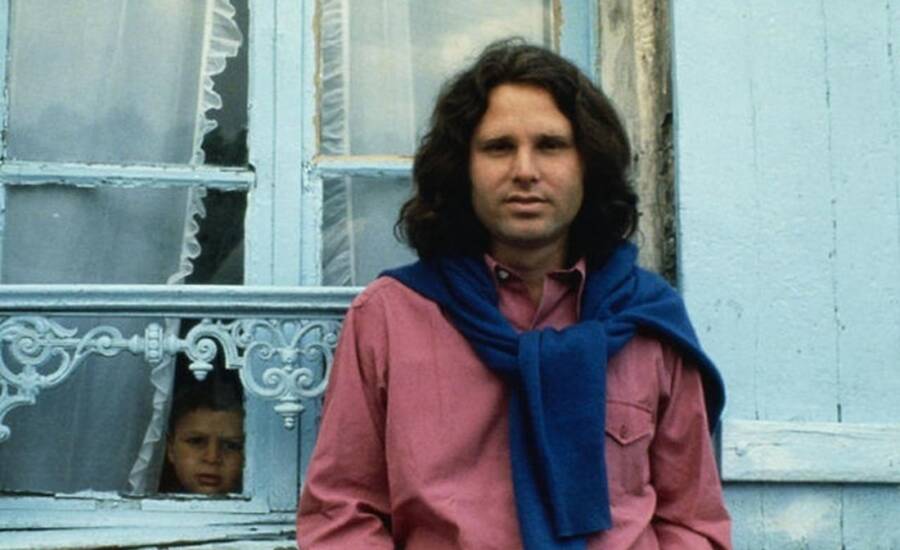 YouTubeJim Morrison in Paris, in one of the last photos taken before he died.

In Paris, Jim Morrison and Pamela Courson rented an apartment at 17 rue Beautreillis near the Seine River. They spent their days strolling around their adopted city. Morrison wrote nearly every day. And, during the night, the couple enjoyed exploring the chic world of Parisian nightlife.

Although Morrison had gained some weight, the last photos of him taken alive show a fit young man. He looked happy and at peace. The time off from his band — and the demands of fame — seemed to have done him good.

But everything changed on July 3, 1971. In the official account of Jim Morrison’s death scene, Pamela Courson found her boyfriend dead in the bathtub of the apartment that they shared in the city.

She called for help, but it was already too late. The French police naturally had some questions — especially since Morrison was just 27 years old — and suspected drugs. But Courson maintained they had merely gone to dinner and a movie and listened to music at home before going to bed.

She said Morrison woke up ill in the middle of the night and took a hot bath while she continued sleeping. It was soon declared that Morrison had died of heart failure, thought to be brought on by a heroin overdose.

With no autopsy performed, Courson’s story was taken at face value. And when she herself died three years later — of a heroin overdose — it seemed that any other information about Jim Morrison’s death had died with her.

But in recent years, some notable figures of the Parisian nightlife scene have told their own version of the story.

How Did Jim Morrison Die? 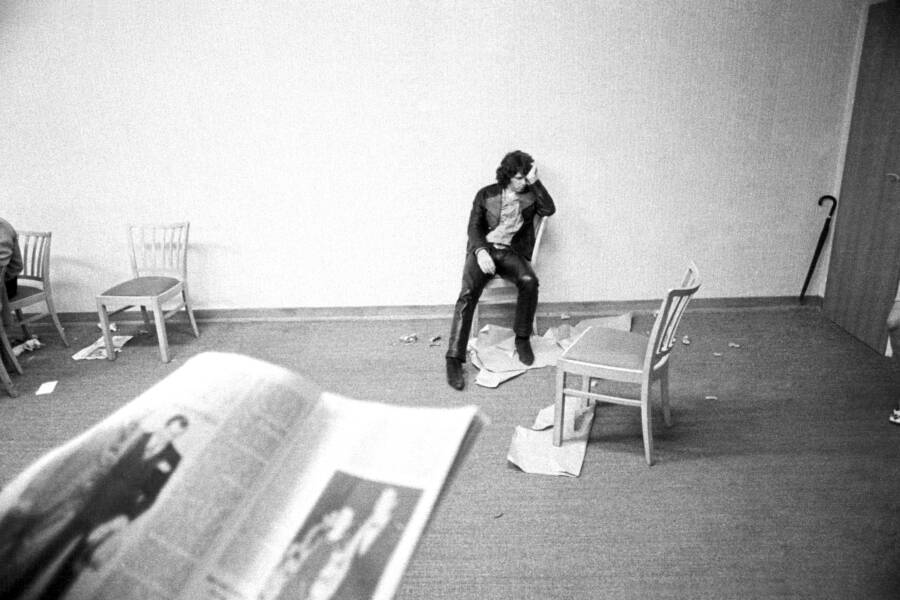 In 2007, a former New York Times journalist named Sam Bernett — who had once managed the Rock’n’Roll Circus club in Paris — came forward with an alarming story. In Bernett’s telling, Jim Morrison did not die in a bathtub.

Instead, his book The End: Jim Morrison claims that The Doors frontman actually died in a toilet stall at Rock’n’Roll Circus. While in Paris, Morrison had certainly spent countless nights at the venue, often alongside Courson. But on July 3, 1971, Bernett allegedly saw him meeting up with two drug dealers before he headed to the bathroom around 2 a.m.

When Morrison failed to reemerge, Bernett had a bouncer kick the door down, only to find him unconscious. Bernett alerted a doctor — a regular at the bar — who confirmed Morrison was dead.

“The flamboyant singer of ‘The Doors,’ the beautiful California boy, had become an inert lump crumpled in the toilet of a nightclub,” wrote Bernett. “When we found him dead, he had a little foam on his nose, and some blood too, and the doctor said, ‘That must be an overdose of heroin.'” 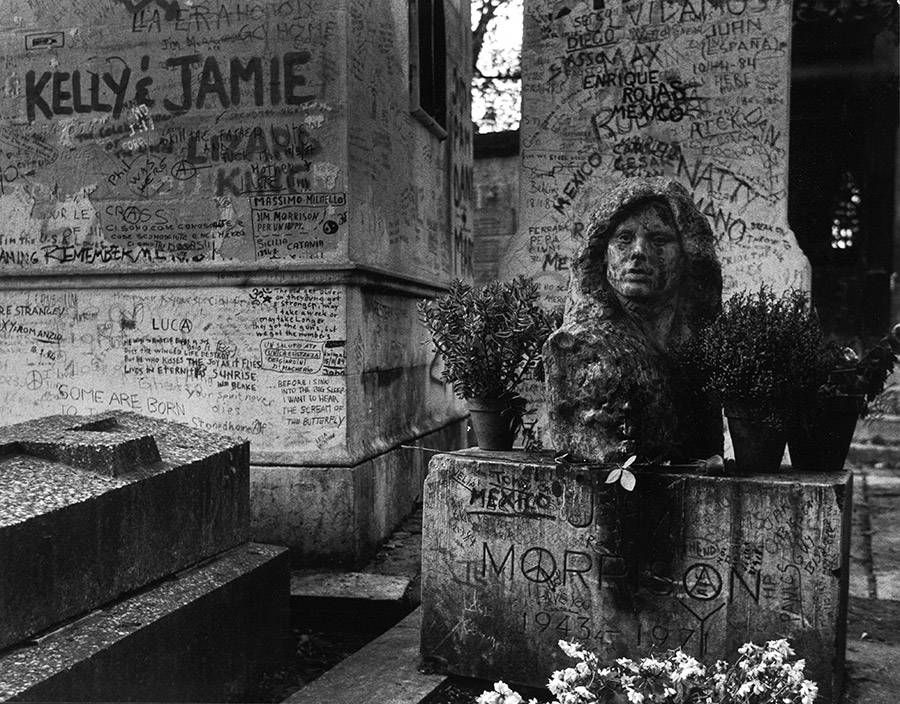 As shocking as that might seem, Bernett isn’t the only person to tell this story. Writer and photographer Patrick Chauvel recalled many of the same things. He was tending bar that night and suddenly found himself helping carry Morrison up a staircase. With no ambulance called, Chauvel believed Morrison had died already or passed out from various substances.

“I think he was already dead,” said Chauvel. “I don’t know. It was a long time ago, and weren’t drinking only water.”

Bernett maintains that the two drug dealers at the scene insisted that Morrison had just “fainted.” While Bernett wanted to call an ambulance, he was soon warned by his boss to stay silent. Ultimately, he believes that the drug dealers carried Morrison’s body outside and drove him home — dumping him into the tub as Courson slept.

The Legacy Of Jim Morrison’s Death 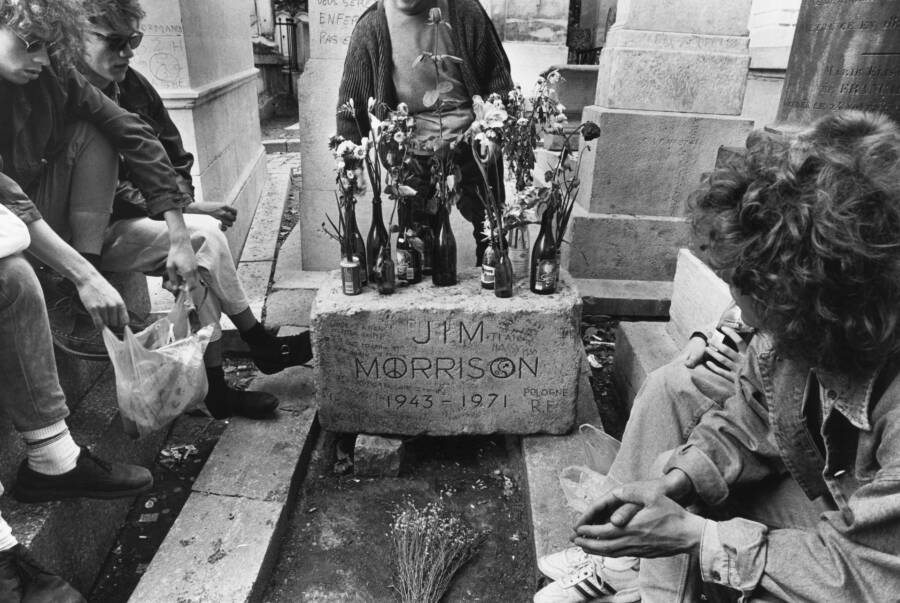 Barbara Alper/Getty ImagesTourists still flock to Jim Morrison’s tombstone to this day to pay their respects.

The most widely accepted account of Jim Morrison’s death is that he and Courson spent the night doing heroin and listening to music together. They snorted the drug because Morrison was reportedly afraid of needles. Unfortunately, that particular batch of heroin was too strong for Morrison.

However, many specific details of the night remain unclear — including how the rock star got into the bathtub. One theory claims that Courson personally put him there, hoping a warm bath would alleviate his symptoms.

After he died, she supposedly waited until morning to notify authorities and feigned ignorance about his drug habits. In the years since then, some conspiracy theorists have even gone so far as to accuse Courson of intentionally playing a role in Morrison’s death.

But according to singer Marianne Faithfull, it was her ex-boyfriend Jean de Breiteuil who supplied Morrison with the heroin that killed him.

“I mean, I’m sure it was an accident,” she said. “Poor bastard. The smack was too strong? Yeah. And he died.”

And yet another wild rumor claims that Morrison took heroin by mistake that night because he thought it was cocaine instead.

As no autopsy was ever performed and many details about that fateful night remain murky, countless conspiracy theories have emerged throughout the decades. Some have even suggested that Morrison faked his own death, moving to New York City to recite poetry or escaping to Oregon to open the Jim Morrison Sanctuary ranch under the name of Bill Loyer.

But regardless of the specifics of Jim Morrison’s death, there’s little doubt that his music lives on. Love for The Doors — and Morrison’s insightful lyrics — have long endured after his untimely demise. And there’s no question that his contributions to the rock world will never be forgotten.

Now that you’ve read about Jim Morrison’s death, learn more about the death of Jimi Hendrix. Then, take a look at the demise of Amy Winehouse.