The Chilling Story Of Joel Guy Jr., The Young Man Who Killed His Parents For Planning To Cut Him Off Financially

In 2016, 28-year-old Joel Guy Jr. murdered his parents, dismembered their bodies, and dissolved their remains in acid while boiling his mother's head on the stove.

Like most Americans in late November, Joel Michael Guy and his wife Lisa were preparing for a feast. The Knoxville, Tennessee, couple was grateful to have their son, Joel Guy Jr., and his three half-sisters over for Thanksgiving. Their joy would tragically turn into terror as Joel Guy Jr. stabbed them both to death later that weekend. 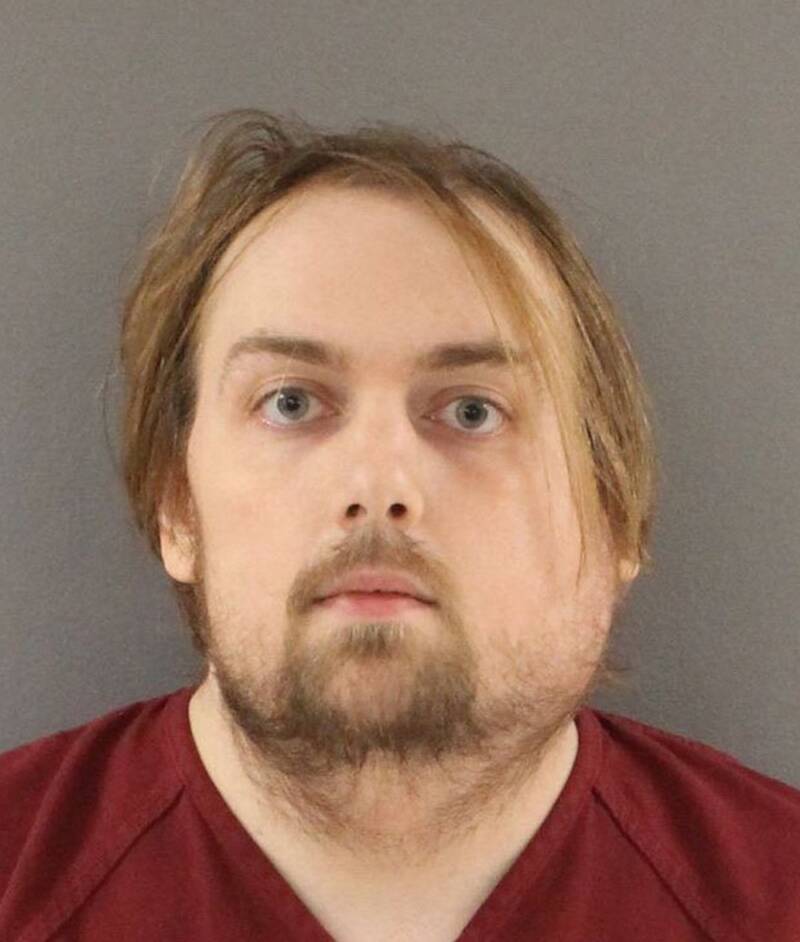 Knox County Sheriff’s OfficeThe crime scene of Joel Guy Jr. was so littered with evidence that it only took police mere days to arrest him.

And the crime scene of Joel Guy Jr. was macabre. He stabbed his father 42 times before knifing his mother 31 times. He dismembered them both, boiling his mother’s head in a pot — and flushing their flesh down the toilet. Joel Guy Jr. had made detailed notes.

“Douse killing rooms (kitchen?) with bleach,” one bullet point read. “Flush chunks down toilet, not garbage disposal,” read another. While the gruesome crime was baffling, the motive was rather blatant: Joel Guy Jr. would receive $500,000 in life insurance if his parents died or disappeared. But he never saw a cent.

Why Joel Guy Jr. Planned To Kill His Parents

Joel Guy Jr. was born on March 13, 1988, with relatives calling him Joel Michael to distinguish him from his father. His half-sisters would note that he was reclusive and rarely left his room, but was intellectually competent. He graduated from the Louisiana School for Math, Science, and the Arts in 2006.

However, Joel spent most of his life with his parents at 11434 Goldenview Lane in West Knox, Tennessee. He spent a semester at George Washington University but dropped out. He later went to Louisiana State University to study plastic surgery but withdrew in 2015 — living lazily in a Baton Rouge apartment.

He had spent nine years in colleges without graduating, all of it financed by his parents. By the time he was 28, he had still never had a job. When Joel Guy Sr. was fired from his engineering job, he knew he should cut his son off. His wife was earning a small salary at a human resources job for another engineering firm, and the couple wanted to retire. 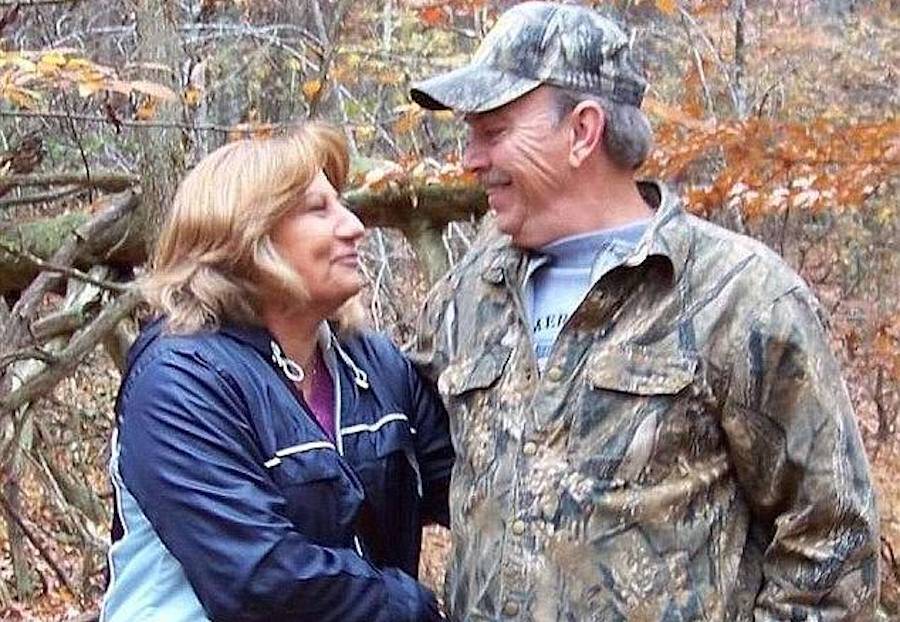 The 61-year-old father and his 55-year-old wife thus happily hosted one last hurrah, inviting their children for Thanksgiving 2016. They planned to move back to their native Kingsport, Tennessee, two weeks later.

But they would never get the chance because Joel Guy Jr., well-versed in his parents’ finances, wanted their money for himself.

The celebratory feast on Nov. 26 seemingly went without a hitch, after which all three daughters returned to their individual lives. Joel Guy Jr., meanwhile, had already plotted out his crimes in a notebook and purchased plastic containers and bleach. When his mother went out shopping on Nov. 24, he began.

Joel Guy Jr. walked upstairs and knifed his father to death in the exercise room. The blade pierced lungs, liver, and kidneys and broke several ribs. Unknowingly widowed, Lisa returned and was similarly ambushed. An autopsy would reveal that Joel had severed nine of her ribs.

But Joel Guy Jr.’s work had only just begun.

Inside The Grisly Crime Scene Of Joel Guy Jr.

Before returning to his apartment on Nov. 27, 2016, Joel Guy Jr. cut his father’s hands off at the wrist and severed his arms at the shoulder blades. He then severed his legs at the hip with a saw and severed his right foot at the ankle, leaving it in the exercise room.

The body was riddled with defensive wounds.

Joel then cut his mother’s body up in an identical fashion, except he also decapitated her. He placed his parents’ torsos and limbs into two 45-gallon plastic containers and turned the thermostat to 90 degrees. His notebook explained that this “speeds up decomposition” and might “melt fingerprints.” 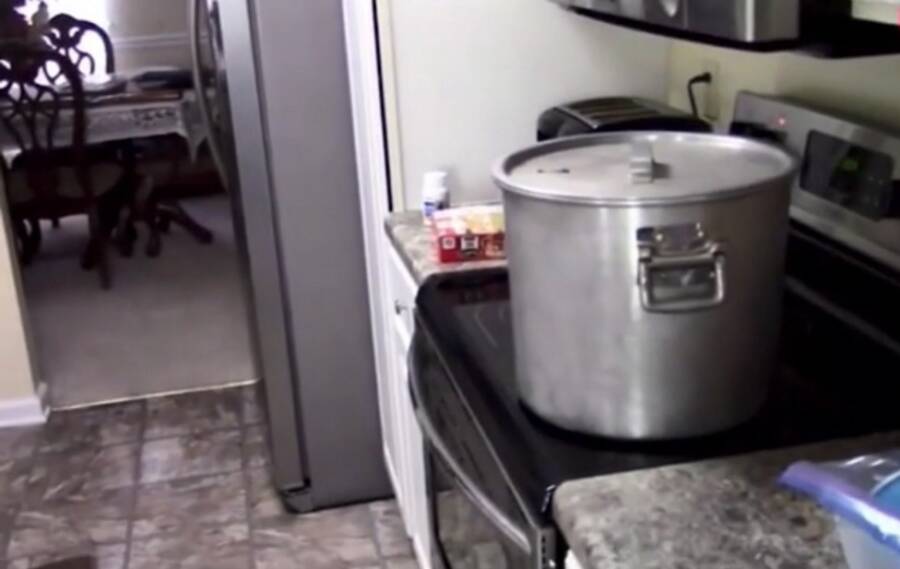 Prosecutors would call those vats of dissolving body parts a “diabolical stew of human remains.” They were found after Lisa Guy failed to show up for work on Monday, and her boss called the police. Knox County Sheriff’s Office Detective Jeremy McCord performed a welfare check and arrived with an “ominous feeling.”

“Walking through the downstairs of the house, nothing made sense to me,” he said. “You can see straight down the hall and I saw hands… not connected to a body. At that point, the other officers held the hallway and we started doing standard building clearing. I will never get those smells out of my head or my dreams.”

The walls were covered in blood, and the floors were littered with blood-drenched clothing. Investigators found Lisa Guy’s head boiling in a stockpot on the stove. Police arrested Joel Guy Jr. on Nov. 29 as he tried to escape his apartment in his 2006 Hyundai Sonata.

His notebook, left behind at the crime scene, included details like considering to flood the home to “cover up forensic evidence” and to set up an automated text from his mother on Sunday to “prove that I was in [Baton Rouge] and she was alive.” It also noted the life insurance policy, which served as the prosecution’s motive.

On October 2, 2020, Joel Guy Jr. was found guilty of two counts of premeditated first-degree murder, three counts of felony murder, and two counts of abuse of a corpse — and was sentenced to life in prison.

After learning about the gruesome crimes of Joel Guy Jr., read about Kelly Cochran, the killer who barbecued her boyfriend. Then, learn about Erin Caffey, the teenager who had her family killed.