What José Guadalupe Posada’s Skeleton Cartoons Teach Us About Life

In José Guadalupe Posada's world, we must start by affirming one truth: we will all one day be skeletons. Life becomes a lot simpler once we accept that. 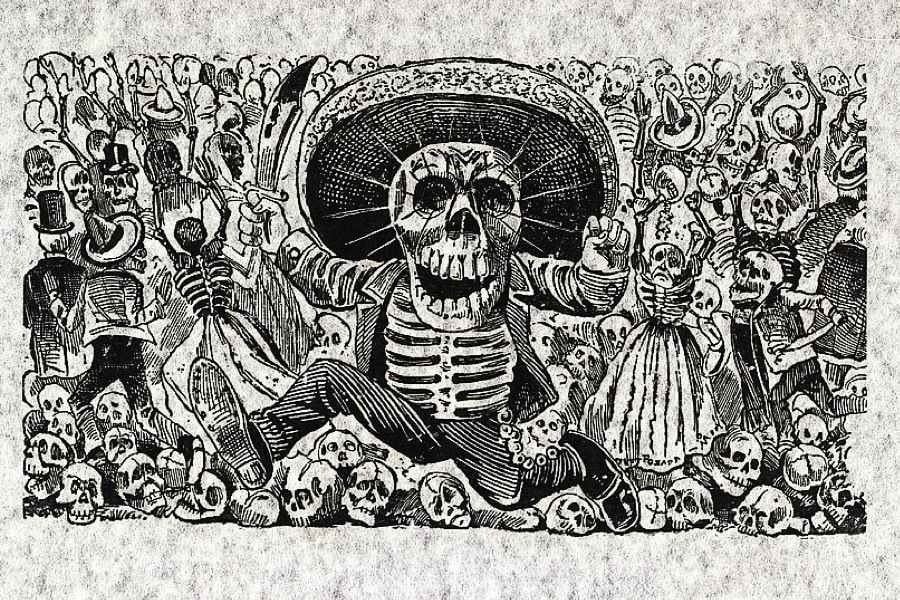 Though José Guadalupe Posada died over a century ago, the apparitions in his art still haunt the world. Posada was a cartoonist, and his work reached a fever pitch just as the Mexican revolution was beginning.

The man who some call Mexico’s first modern artist was born in Aguascalientes, Mexico, in 1852. As a teenager, he studied lithography at a local workshop called El Esfuerzo, The Effort or The Striving. Lithography is a printmaking technique that involves drawing on a metal plate with an acid-resistant stain, then burning off the rest of the surface with acid. Then the plate can be filled with ink and used to print cartoons. This is the technique Spain’s Francisco de Goya used in his famous Disasters of War, and it is how Mexico’s brilliant Posada got his start.

As a lithographer, Posada began creating cartoons for the local paper in Aguascalientes, which was called El Jicote, The Wasp. But his mockery of the town’s political bosses was a little too stinging. The local pols forced Posada and his editor to flee town in 1872.

Posada spent the next sixteen years in León, Guanajuato. Eventually, when floods inundated the town in 1888, he moved to Mexico City. There, starting in his late thirties and continuing on into his forties and fifties, his career reached new heights. 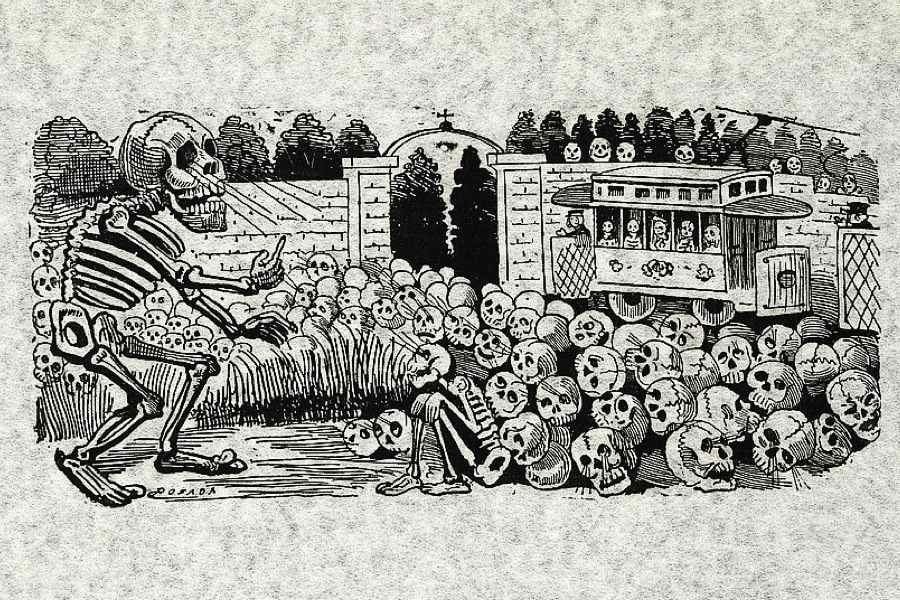 One of José Gaudalupe Posada’s infamous calaveras makes a speech to an audience of adoring skulls about the wonders of electric trolleys. The skeleton in front is especially enraptured.
Source: Library of Congress

In the capital, Posada worked as a freelancer, and his clients included a variety of city papers, such as El Teatro, El Centavo Perdido (The Lost Penny), and El Hijo del Ahuizote (The Son of the Nuisance). He took on political controversies such as grain shortages and the divide between poor and rich, and his cartoons sometimes featured heroic portraits of anti-establishment revolutionaries. On a few occasions, his more subversive prints landed him in jail.

It was during this time in Mexico City that Posada began producing more and more of what today is his trademark creation: the calavera. Calavera means “skull,” but in Posada’s case the part stands for the whole. The “skull” signifies the “skeleton,” the same way Gogol used “Nose” and “Overcoat” to stand in for whole people in his stories.

Many of these skeletons appeared on broadsides – single-page spreads sold for a cent on the streets by Mexico City newsies. This was a popular medium in the late 1890s and early twentieth century. 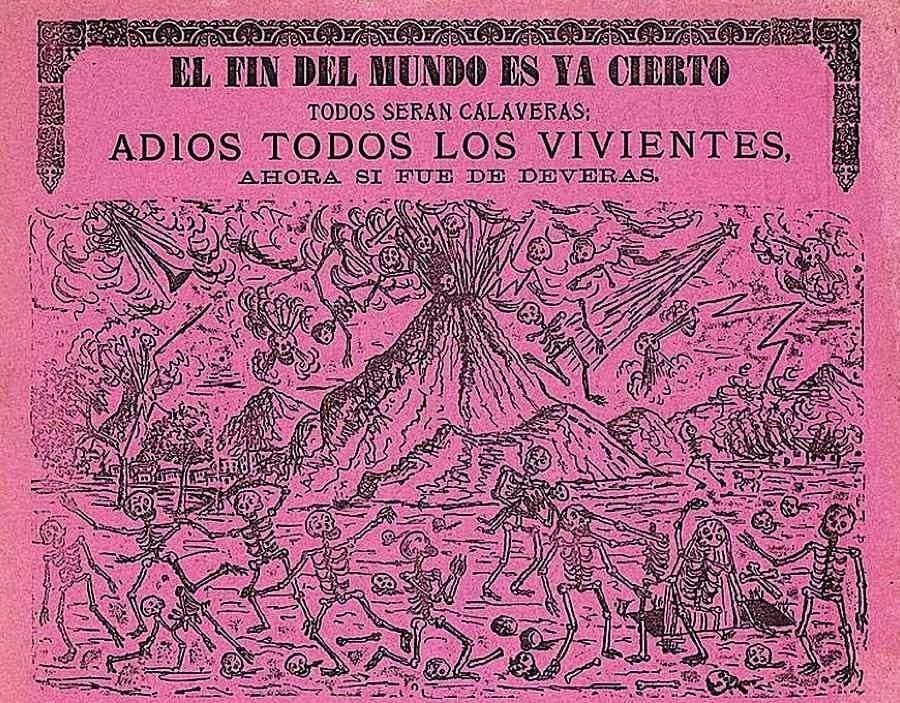 The Calavera del monton, the “skeleton of the mountain, representing Francisco Madero, treads across the front of one of Posada’s broadsides.
Source: Library of Congress

Posada’s calaveras combine contemporary anxieties with deep-rooted Mexican traditions, such as those that culminate in the famous Day of the Dead. He has a skeleton preacher heralding the wonders of electricity with a crowd of skull onlookers.

He has a cat-like skull figure represent the dangers of conmen in Mexican society – a warning that also easily applies to abusive political leaders. His Calavera del monton, the “skeleton of the mountain, has distinctive features – including his mustache and his bottle of tequila from a particular distillery – that identify this sombrero-wearing man-of-the-people as Francisco Madero, one of the most important leaders of the Mexican revolution. 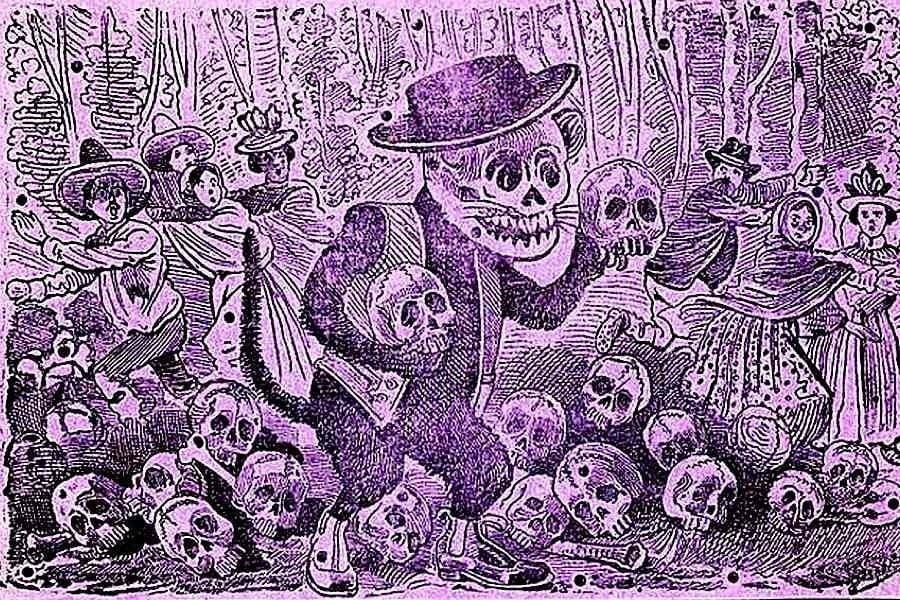 Posada’s skeletons remind us that life is short. But they do so in a way that is liberating. If we’re all just walking skeletons, then we don’t need to worry about social pressures, status or what other people think. Posada’s skulls are very democratic in this way. It would be absurd to think one of them deserves more advantages or more prestige than any other. 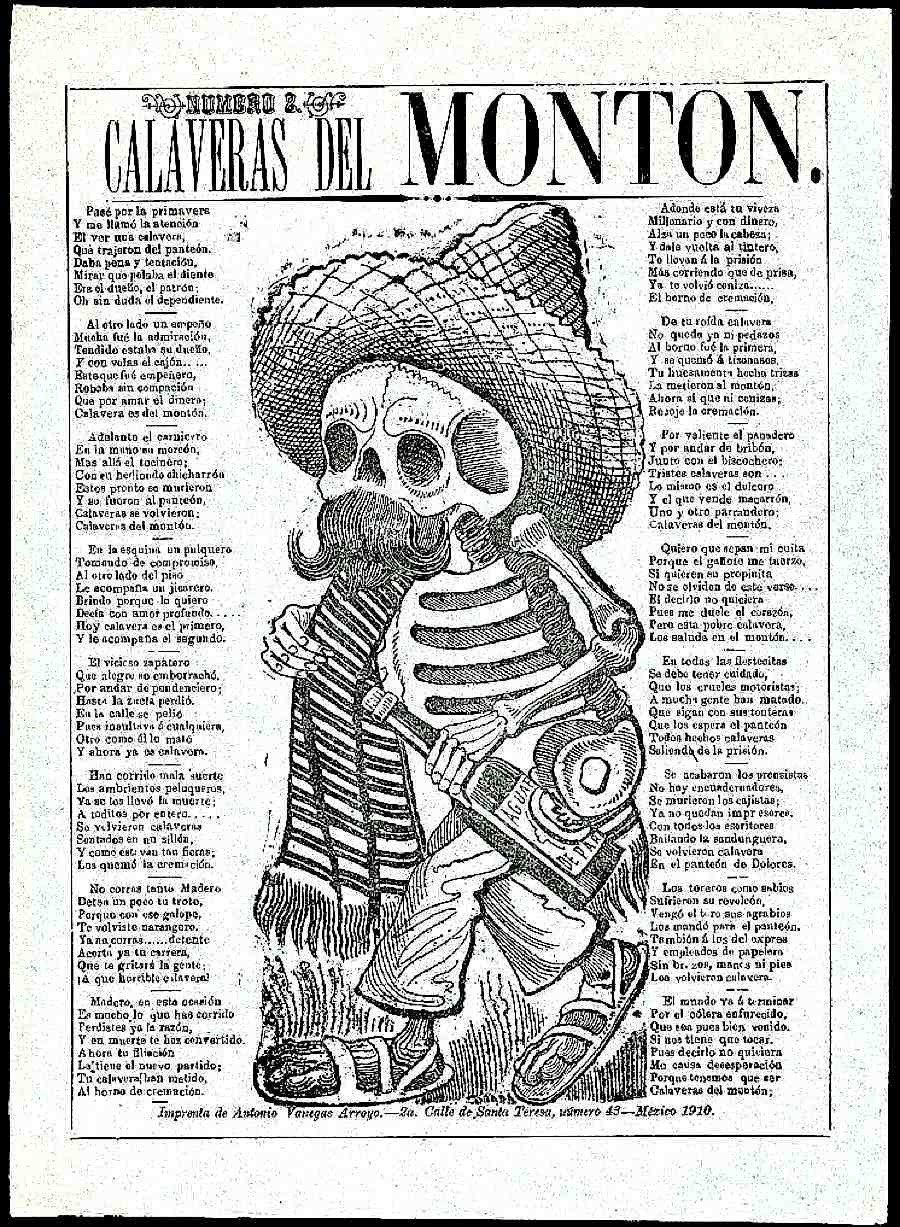 The title of this Posada print reads, “The end of the world is already certain. All will be skeletons: Goodbye to all the living, this is for real.” Source: Library of Congress

Although people throughout Mexico City and the country knew Posada’s characters, he had almost no personal fame during his lifetime. He had to be “discovered” years after his death by the French artist Jean Charlot, who called Posada “the printmaker of the Mexican people.” When Posada died, his own bones were laid in an unmarked grave.

Still, though he ended his days in obscurity, José Guadalupe Posada’s delightfully morbid calaveras continue to run rampant through the land of the living.