The Tragic Tale Of Joseph Merrick, “The Elephant Man” Who Just Wanted To Be Like Everybody Else

Imagine as a new parent having a beautiful and healthy baby boy. Now imagine, at age five, your child’s appearance starts to change in unexpected ways.

His once-perfect lips swell up. His pink skin thickens and turns a sickly gray hue. A mysterious lump emerges from his forehead. A sack of flesh bubbles from the back of his neck. 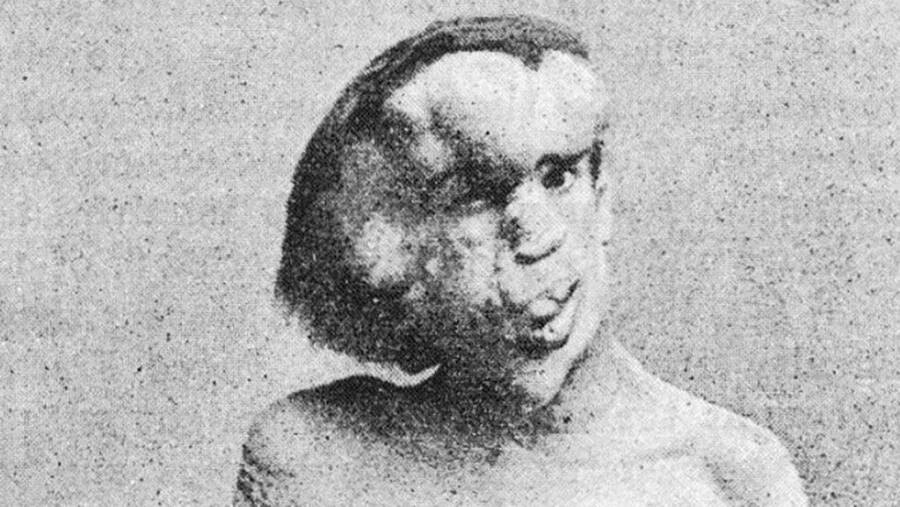 Wikimedia CommonsJoseph Merrick, “The Elephant Man” made a living as a freak show performer in Victorian London.

Both feet grow abnormally large. His right arm grows increasingly deformed and gnarled, while his still-normal left arm highlights his transformation into what the world will perceive as a human monstrosity.

This is precisely how a young English boy named Joseph Merrick transformed into a 19th-century freak show performer known as “The Elephant Man.” 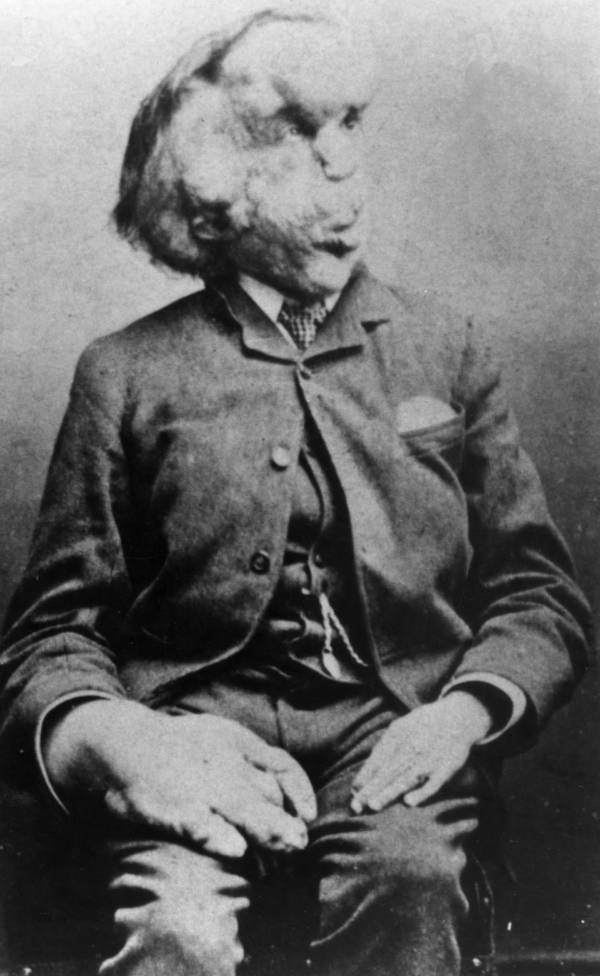 Wikimedia CommonsJoseph Merrick’s mother believed that a frightening incident involving an elephant that occured during her pregnancy cause her son’s deformities.

Joseph Carey Merrick was born in 1862 in Leicester, England. By 1866, his unusual appearance had begun to present itself, but medically, nobody understood what caused his condition. Even today, his precise condition remains mysterious as DNA tests on his hair and bones have been inconclusive.

Without medical guidance, his mother came to her own conclusions, recalling an incident during her pregnancy when she went to a fair.

An unruly crowd of people pushed her into an oncoming animal parade. An elephant reared up and she was briefly caught underfoot, frightened for two lives. She told this story to young Joseph, explaining that this incident had caused his deformities and the pain that sprung from them.

In addition to his unusual deformities, he also injured his hip as a child and a subsequent infection made him permanently lame, so he used a cane to help himself walk.

His mother, with whom he was close, died of pneumonia when he was just 11 years old. Tragically, even among all of his other troubles, he called her death “the greatest misfortune of my life.”

It was around this time that he quit school. The anguish Merrick felt from others’ teasing his appearance and now his mother’s absence was just too much to bear. But how would a boy who called his own face “…such a sight that no one could describe it,” survive in such a cruel world? 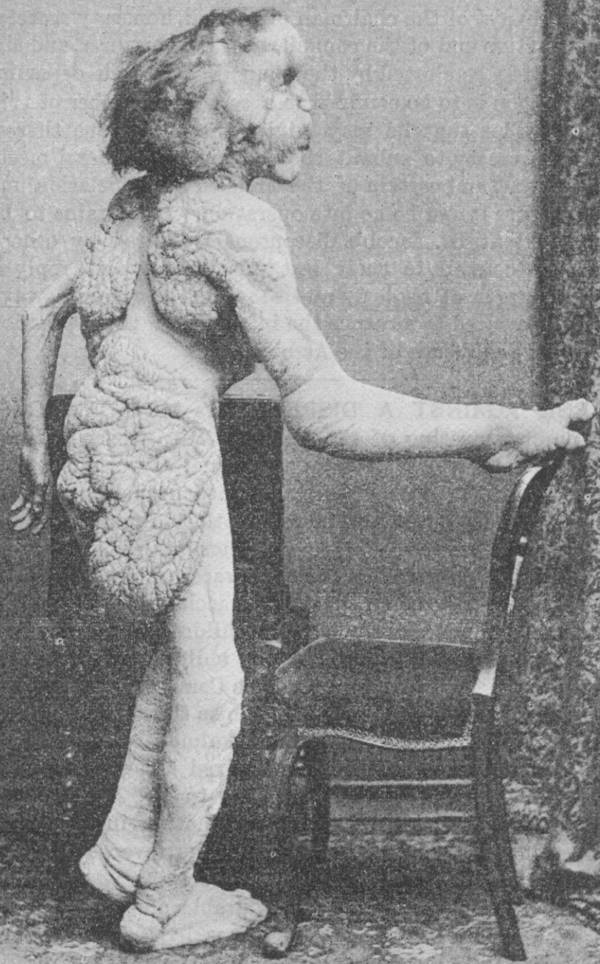 Wikimedia CommonsDue to the weight of his head, Joseph Merrick had to sleep sitting up or else his neck would snap.

As if Joseph Merrick’s life wasn’t melancholy enough, he soon encountered his very own “evil stepmother.” She arrived only 18 months after his mother’s death.

Merrick later wrote, “She was the means of making my life a perfect misery.” His father withdrew affection as well, leaving the boy essentially alone. He couldn’t even run away. The few times he tried, his father brought him right back.

If he was not at school, his stepmother demanded, then he should be bringing home income. So at age 13, Merrick worked at a cigar rolling shop. He worked there for three years, but his worsening hand deformity limited his dexterity, making the job increasingly difficult.

Now 16 and unemployed, Joseph Merrick wandered the streets during the day, looking for work. If he returned home during the day for lunch, his stepmother would taunt him, telling him that the half-meal he got was more than he’d earned.

Merrick then tried to sell goods from his father’s shop door to door, but his contorted face made his speech unintelligible. His appearance frightened most people, enough to make them refrain from opening their doors. Finally, one day his frustrated father severely beat him and Merrick left home for good.

Merrick’s uncle heard about his nephew’s homelessness and took him in. During this time, Merrick’s hawking license was revoked, as he was erroneously seen as a menace to the community. After two years, his uncle couldn’t afford to support him anymore.

The now 17-year-old boy left for the Leicester Union Workhouse. There, Joseph Merrick spent four years with other men ages 16 to 60. He hated it and came to realize that his only escape might be peddling his deformity as a novelty act. 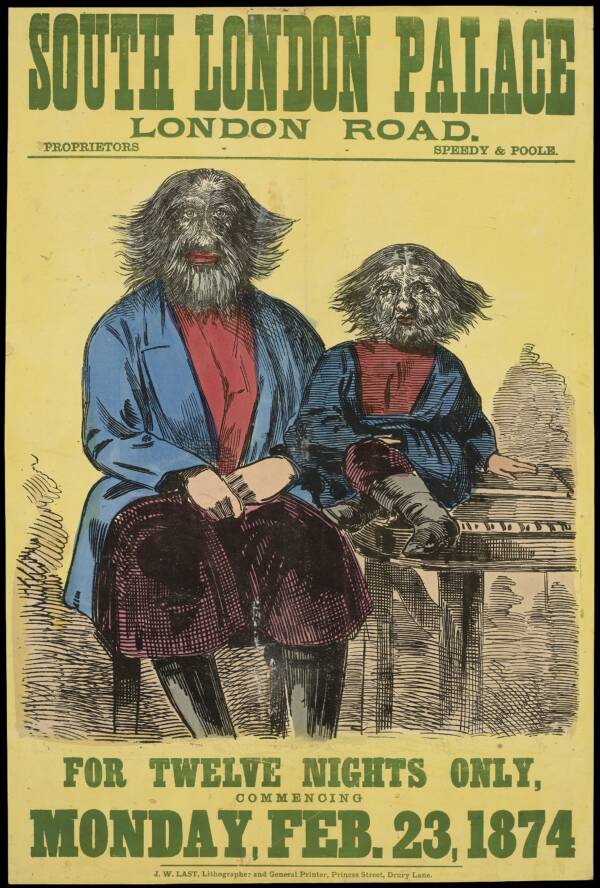 Joseph Merrick wrote to local proprietor Sam Torr. After a visit, Torr agreed to take Merrick on tour as a traveling act. He secured him a management team, and in 1884, billed as “half a man, half an elephant” he began his “freak show” career.

With Norman, he was given an iron bed with a curtain for privacy and was displayed in the back of a vacant shop. Upon seeing how Merrick slept — sitting, his legs drawn up and used as a headrest — Norman realized Merrick wasn’t able to sleep lying down. The weight of his enormous head could crush his neck.

Norman stood outside, using his natural showmanship to usher people into the shop to see Joseph Merrick. He assured the eager crowds that the Elephant Man was “not here to frighten you but to enlighten you.”

The show was moderately successful. Joseph Merrick set aside his cut of the profits in hopes of buying his own house someday.

Norman’s shop sat just across the road from London Hospital where Dr. Frederick Treves worked. Curious, Treves went to see Merrick by appointment before the shop opened. Horrified but intrigued by what he saw, Treves asked if he could take “The Elephant Man” to the hospital for an examination. 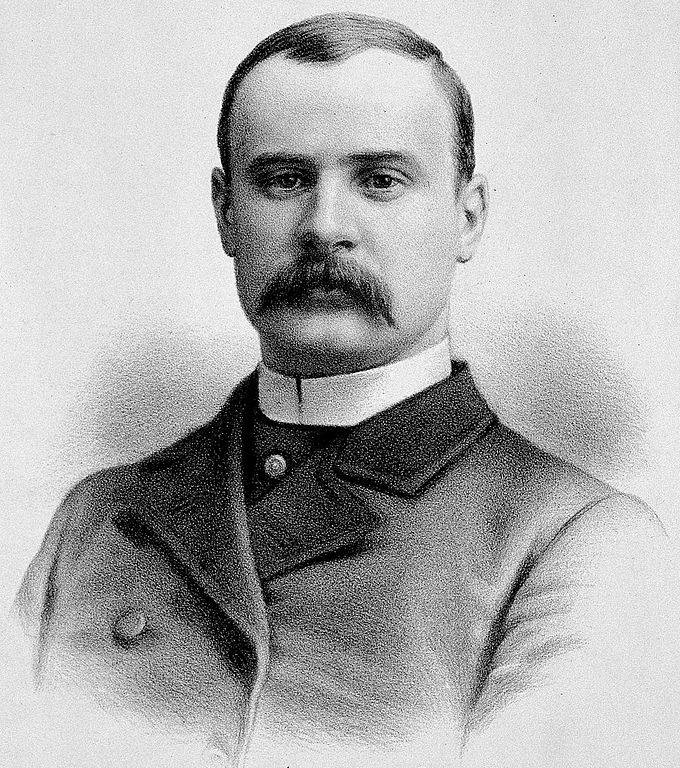 “His head was the most interesting thing. It was very, very big – like an enormous bag with a lot of books in it.” Treves later wrote.

Over the course of a few visits, Treves took some notes and measurements. Eventually, Merrick got tired of being poked and prodded in the name of science. Treves gave Merrick his calling card and sent him on his way.

But by that time, “freak shows” were falling out of favor. Police closed down shops on account of morality and decency concerns.

Just as Merrick was finally making money, he was shuttled by his Leicester managers to continental Europe in hopes of finding more lenient laws. In Belgium, his new area manager stole all Merrick’s money and abandoned him.

The Later Career And Life Of Joseph Merrick 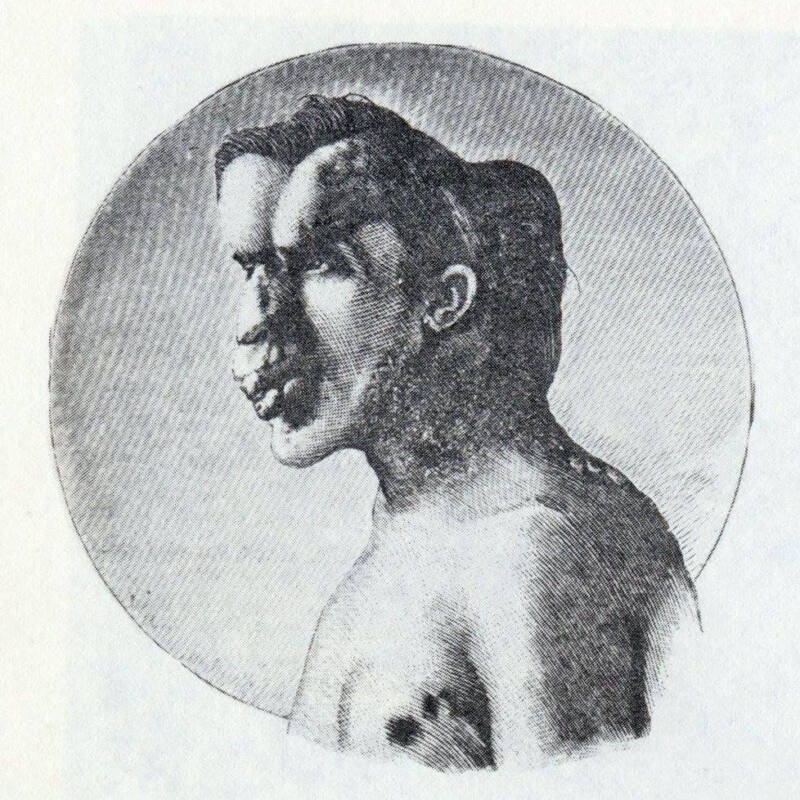 Stranded in a strange place, Joseph Merrick didn’t know what to do. Eventually, he boarded a ship for Harwich in Essex. He then caught a train for London — a broke man with a broken body.

He arrived at London’s Liverpool station in 1886, exhausted and still homeless, asking strangers for help returning to Leicester. The police saw the crowds gathering around the disheveled man and detained him.

One of the only possibly identifying possessions Merrick had was Dr. Treves’ card. The police called him up, and Treves immediately picked Merrick up, took him to the hospital, and made sure that he was washed and fed.

After another examination by Treves, he determined that Merrick now also suffered from a heart condition. He concluded that the 24-year-old likely had only a few years of life left in his deteriorating body.

The chairman of the hospital committee then wrote an editorial in The Times, asking the public for suggestions about where Joseph Merrick could stay. He received donations for the Elephant Man’s care — lots of them. The London hospital now had funds to care for Merrick for the rest of his life. 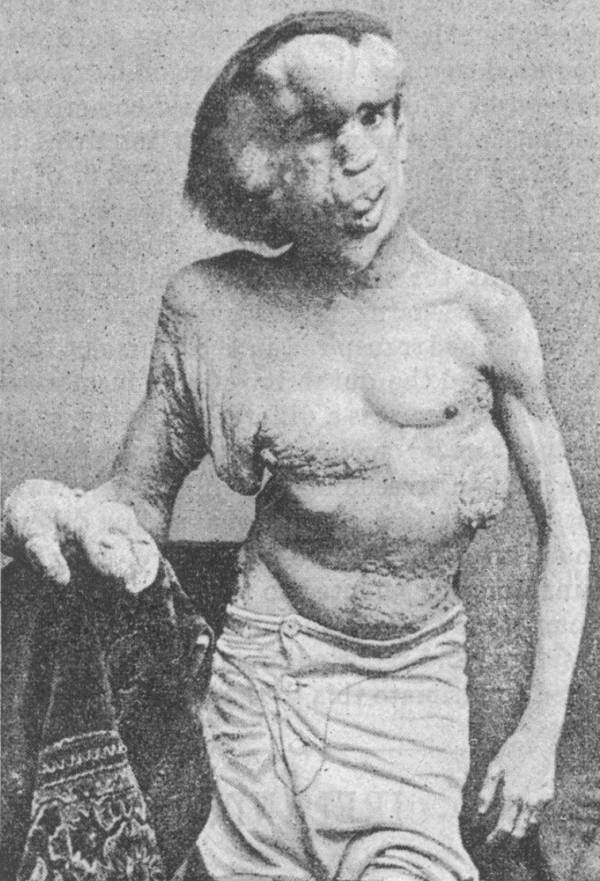 Wikimedia CommonsJoseph Merrick, “the Elephant Man,” in 1889. He would die the next year at just 27 years old.

In the hospital basement, two adjacent rooms were specially adapted for him. There was access to the courtyard and no mirrors to remind him of his appearance. Over his last four years spent in the hospital’s care, he enjoyed his life more than he ever had before.

Treves visited him almost daily and became used to his speech impediment. Though he’d originally assumed that the Elephant Man was “an imbecile,” he came to find Merrick’s intellect completely normal. Though Merrick was wholly aware of the unfairness that filled his existence, he bore little ill will towards the world that had shrunk away from him in disgust.

Thus far, Merrick never met a woman who didn’t cower at the sight of him. Treves knew the one and the only female in his life was his mother.

So, the doctor arranged a meeting for him with a young, attractive woman named Leila Maturin. Treves outlined the situation and briefed her on Merrick’s deformities. The meeting made Merrick instantly emotional. It was the first time that a woman had smiled at him or shook his hand.

Despite acquiring some semblance of an ordinary life in his last years, Merrick’s health steadily declined. The deformities on his face, as well as his entire head, continued to grow. A hospital employee found him dead in his bed on April 11, 1890, at just 27 years old.

But the autopsy revealed a surprising cause of death. Joseph Merrick died doing something that many of us take for granted. He died from asphyxia and had suffered a dislocated neck because he’d tried to sleep lying down.

The Search For The Elephant Man’s Grave

After Merrick’s death, Dr. Treves wrote a memoir about their time together in which he erroneously calls him “John Merrick” titled The Elephant Man and Other Reminiscences. According to the BBC, Merrick’s skeleton was preserved at the Royal London Hospital as a scientific specimen.

However, Merrick’s soft tissue was buried elsewhere. Nobody really knew exactly where these remains lay until 2019.

Jo Vigor-Mungovin, author of Joseph: The Life, Times & Places of the Elephant Man, claimed to have discovered the location of his burial in be an unmarked grave in the City of London Cemetery and Crematorium.

She said that the story of Merrick’s soft tissue being buried had not been proven because of the number of graveyards at the time.

“I was asked about this and off-hand I said ‘It probably went to the same place as the [Jack the] Ripper victims’, as they died in the same locality,” Vigor-Mungovin said. She began to do some looking through the City of London Cemetery and Crematorium records, narrowing the time period of her search.

“I decided to search in an eight-week window around the time of his death and there, on page two, was Joseph Merrick,” she recounted.

Although there has not been any testing of the remains that are buried in the suspected site, the author, who had done extensive research into Merrick’s life for her book, is “99% certain” that it is the grave of England’s Elephant Man.

Considering the fact that the cemetery records showed the deceased’s residence was London Hospital — the location at which Merrick had spent the last years of his life — and that the age of the deceased was about the same as Merrick’s when he died.

The detailed records also listed Wynne Baxter as the coroner, the same medical worker who conducted the inquest of Merrick’s death. The burial is dated 13 days after Merrick had died.

“Everything fits, it is too much to be a coincidence,” Vigor-Mungovin said. Authorities have said that a small plaque could be made to mark the discovered grave and Vigor-Mungovin had hope that a memorial in Merrick’s hometown of Leicester could follow.

However, whether or not a memorial is constructed, it’s unlikely that the world will ever forget the strange and tragic story of Joseph Merrick’s short life.

After this look at Joseph Merrick, the real life Elephant Man, read the tragic tales of six iconic “freak show” members of decades past. Then, read up on the sad yet murderous story of “Lobster Boy.”