Billed as a human-orangutan hybrid, Julia Pastrana made her stage debut in 1854. Though she eventually fell in love and got married, her life was isolated and cut tragically short. 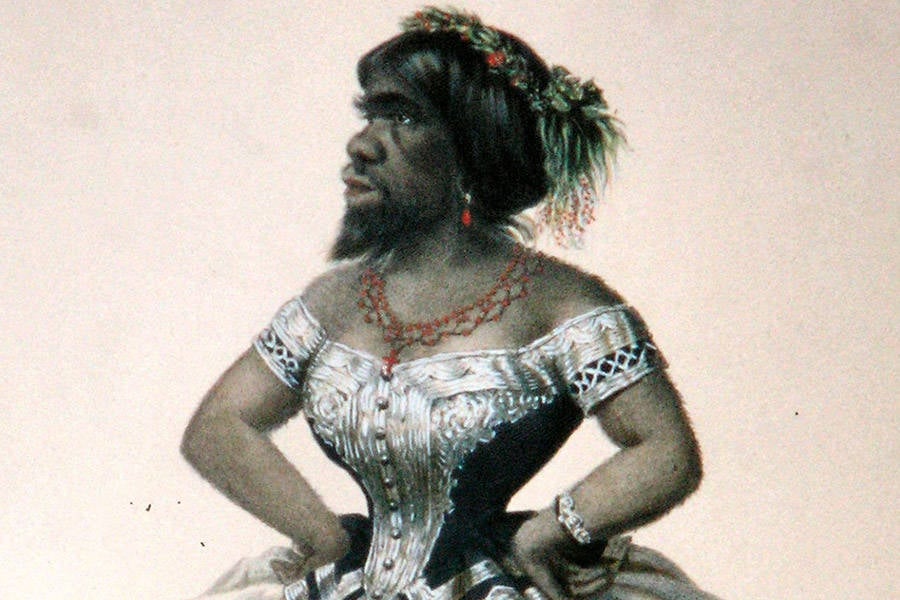 Wikimedia CommonsJulia Pastrana was a famous sideshow performer in her day, but her celebrity was marred by racism and bigotry.

Nineteenth-century audiences recoiled at the sight of Julia Pastrana, the sideshow performer better known as the “Ape Woman.” One theater critic called her a “semi-human being” while another referred to her as a “Baboon Woman.”

But Julia Pastrana, of course, was no beast. According to spectators and those who knew her, Pastrana was an intelligent Indigenous Mexican woman whose life was shaped by brutal racism and cruelty.

Due to hypertrichosis and gingival hyperplasia, Julia Pastrana was covered in hair and had exaggerated features that caught the attention of sideshow promoters. And though she caused a stir with sold-out crowds as she toured across Europe and North America, her behind-the-scenes life was marked by sadness and tragedy. 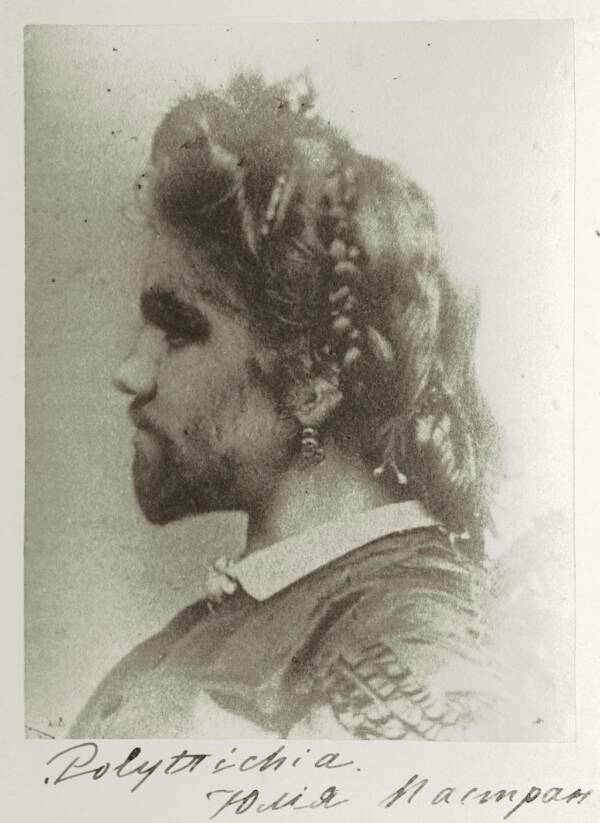 The problem with trying to understand Julia Pastrana’s history is that multiple versions of her life story exist. Those who ran sideshows often didn’t take the time to listen and record the backstories of their performers. As such, the life of many sideshow performers, Julia Pastrana included, is marred by sensationalism and exploitation.

The literature provided by the sideshow that first purchased her said that Pastrana was born in Mexico in August of 1834. She reportedly belonged to an indigenous tribe called the “Root Diggers”.

The bill at her early shows claimed that her people resembled apes and lived in caves, and Pastrana was only brought to the sideshow when a woman named Mrs. Espinosa — who was “captured” and held hostage by Pastrana’s tribe — escaped, and took Julia Pastrana with her.

A more likely origin story, however, is the one shared by the villagers of Ocoroni in Sinaloa Mexico. In their version, Pastrana was born with the condition hypertrichosis, which covered her face and body in thick hair.

Referred to by the locals as “Wolf Woman” due to her genetic abnormality, she lived with her mother until her mother passed away of unknown causes. She was then transferred to the custody of her uncle, who sold her to the circus.

This is where those two accounts of her origin story converge. In the early 1850s, Julia Pastrana somehow came into the custody of Pedro Sanchez, the then-governor of Sinaloa. He reportedly treated her horribly, and she ultimately left Sanchez’s custody in 1854 when she was purchased by Francisco Sepúlveda, who brought her to the United States. 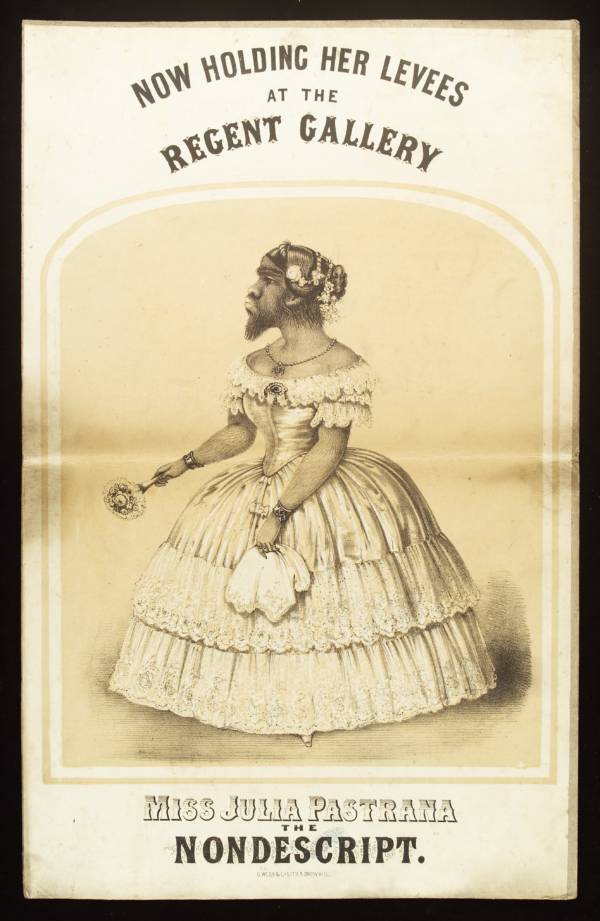 Wikimedia CommonsJulia Pastrana was billed as “The Ape Woman” and drew crowds all over the United States and Europe.

In December 1854, Julia Pastrana stepped on stage at Broadway’s Gothic Hall in Manhattan. Dressed in red, Pastrana entertained the audience by singing and dancing.

Adults paid a quarter, and children paid 15 cents, to see the “Baboon Lady.” The theater chronicler for that show, George C. D. Odell, called Pastrana a delightful “semi-human being” and a cross between a woman and an orangutan. He noted that she – or “it” — was intelligent with a fine voice who could speak three languages.

“Its jaws,” he continued, “jagged fangs and ears are terrifically hideous.” He concluded that she was a “joke of nature.”

Her manager Theodore Lent, meanwhile, also did his best to entice the public by billing her as half woman and half animal. It is believed that Pastrana fell in love with Lent as they toured America and Europe together. They did eventually elope, though he continued to refer to as “The Ugliest Woman in the World” for shows.

He also barred her from walking the streets in daylight, worried that no one would pay to see her on the stage if they caught a glimpse for free. Pastrana had very few friends, and one, a singer from Vienna, lamented the “light fog of sadness” that trailed her.

But The Liverpool Mercury marveled, “she is good-natured, sociable, and accommodating,” pointing out that Julia was bilingual and could “dance, sing, sew, cook, wash and iron.”

Victorian audiences, eager for circuses and “freak shows,” flocked to her shows, while scientists also marveled over Pastrana’s condition. 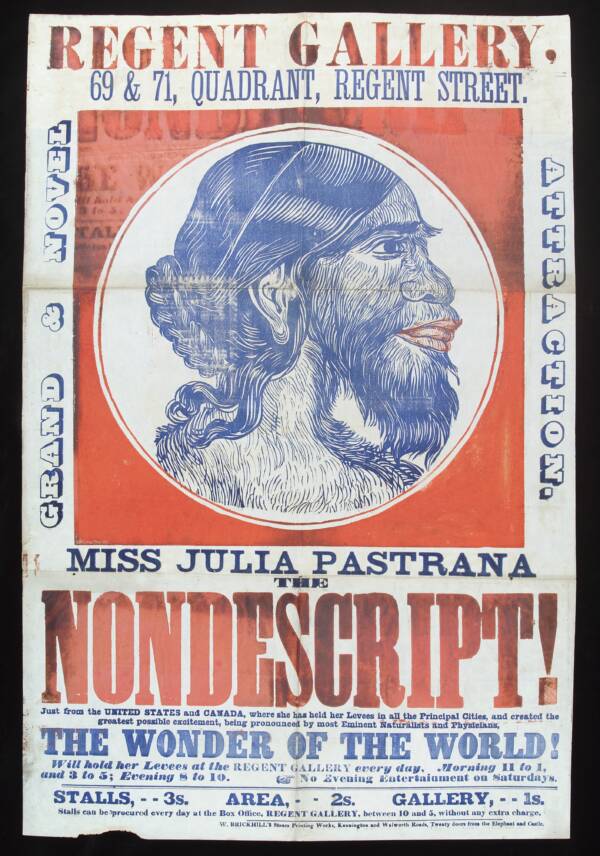 Billed as “the missing link” between apes and man, Julia Pastrana was checked out by several physicians who produced certificates — which were displayed wherever Pastrana went on tour — stating that she was not really a woman at all, but rather a new species of half-human, half-ape hybrid.

One doctor, Alexander B. Mott, proclaimed that she was part human and part orangutan. His diagnosis followed a racist tradition of linking darker-skinned people with animals. For example, in the 17th century, Jacob Bontius blamed Indigenous Indian women for the existence of orangutans, claiming that they “mixed with apes and monkeys with detestable sensuality.”

Charles Darwin, for his part, described her as “a remarkably fine woman” albeit with “a thick masculine beard and a hairy forehead.” A zoologist named Francis Buckland, who examined Pastrana in 1857, largely agreed. He said she had an “exceedingly good figure” despite being “hideous.”

Hermann Otto, a circus owner, was even more damning in his descriptions of her. When he met with Pastrana, he said she seemed like “a monster to the whole world, an abnormality put on display for money… like a trained animal.”

The gawkers, physicians, and spectators left Pastrana feeling very alone. “It affected her very deeply in her heart with sadness,” Otto related. “Having to stand beside people, instead of with them, and to be shown as a freak for money, not sharing any of the everyday joys in a home filled with love.”

While the full science behind the abnormality that caused her condition continues to be studied, even today, congenital hypertrichosis has a variety of effective treatments, including laser hair removal and hormone treatments.

Her Sudden Death Just After Losing A Child 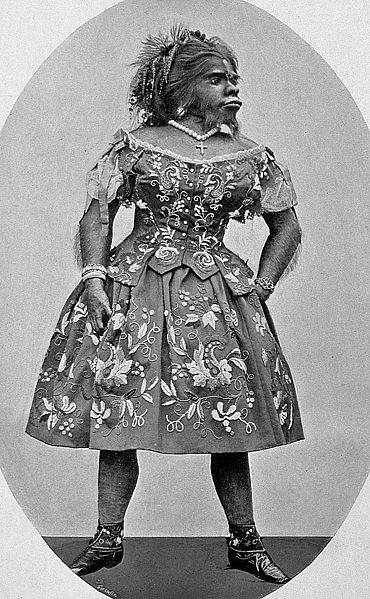 Pastrana indeed did not share in the “everyday joys in a home filled with love.” Though she married Theodore Lent, it was not so much out of love as it was business — for him. Lent worried that a rival might try to steal his most lucrative act, so he proposed to her in the late 1850s to secure his investment.

Then, Pastrana got pregnant. Standing at only four foot six, labor put her very life at risk. While giving birth, doctors had to use forceps to deliver her baby, resulting in several severe lacerations.

The newborn would only survive a little over a day after his birth and he had inherited the condition that made his mother famous — he too was covered in dark hair. Five days after her child died, Julia Pastrana followed due to postpartum complications.

Lent sold their corpses to a professor at Moscow University who promised to embalm them, and then he took the preserved bodies of Julia Pastrana and their dad son on tour. Lent even tracked down another woman named Marie Bartel who had the same condition as Pastrana and married her.

He renamed her “Zenora Pastrana,” luring in audiences with the claim that she was Julia’s younger sister.

Pastrana’s Legacy In The Modern Era

And so, death didn’t free Pastrana from public gawking. Her body was exhibited all over Europe for decades until, finally, the bodies ended up in storage in Norway.

Pastrana’s story was not forgotten, however.

In 2013, over a century after she left the Sierra Madre Mountains for a career in the United States, Pastrana finally returned home.

Thanks to the efforts of Sinaloa state governor Mario López Valdez, New York-based visual artist Laura Anderson Barbata, and Norwegian authorities, Julia Pastrana was finally repatriated and laid to rest in a town near the place she was said to have been born in Sinaloa. She was given a Catholic ceremony and buried, free from prying eyes at last.

“Julia Pastrana has come home,” declared Saul Rubio Ayala, the mayor of Sinaloa de Leyva. “Julia has been reborn among us. Let us never see another woman be turned into an object of commerce.”

After this look at the tragic life of sideshow performer Julia Pastrana, check out more famous sideshow “freaks.” Then, meet P.T. Barnum’s 13 most famous and incredible oddities.