Tourists are beginning to trickle into the volcanic peninsula of Kamchatka in Russia. If you don't have the budget to visit just yet, let us be your guide.

Unless you spent long nights in your college dorm room hovering over plastic armies in the board game Risk, you have probably never heard of Kamchatka. About the size of Italy in terms of land area, this peninsula in far eastern Russia has fewer people living in it than Florence — but it is attracting more and more tourists every year. They come to see the region’s 160 volcanoes and the populations of brown bears, eagles, foxes, and coastal birds that thrive in this immense wilderness.

The 800-mile-long Kamchatka Peninsula stretches down from the farthest swaths of far eastern Russia, splitting the Sea of Okhotsk from the Bering Sea and acting as a sort of geographic weigh station between Alaska and Japan. 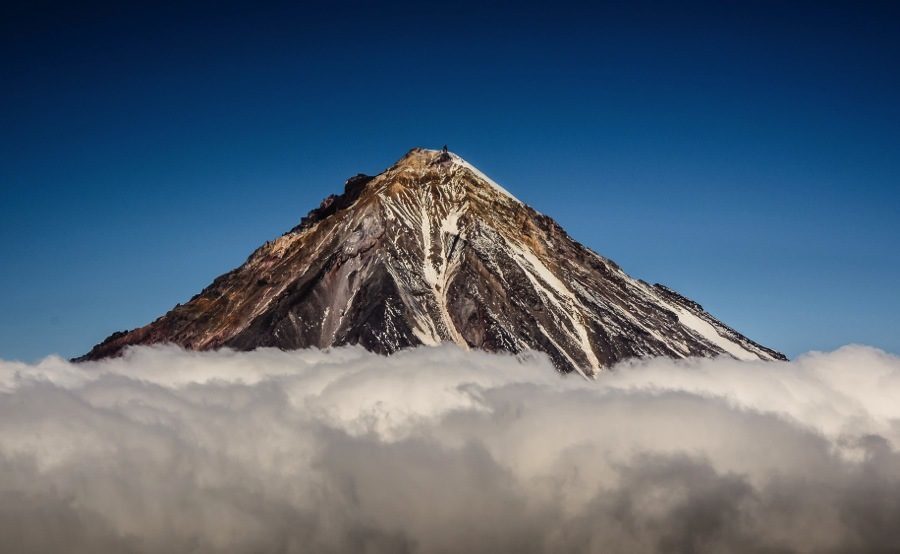 The Koryaksky Volcano rises through the clouds above the Kamchatka Peninsula in far eastern Russia.

As such, Kamchatka forms one border of the Pacific “ring of fire,” a lasso of volcanoes and tectonic fault lines that whips south to the Philippines and Indonesia and then loops back along the coasts of the Americas. 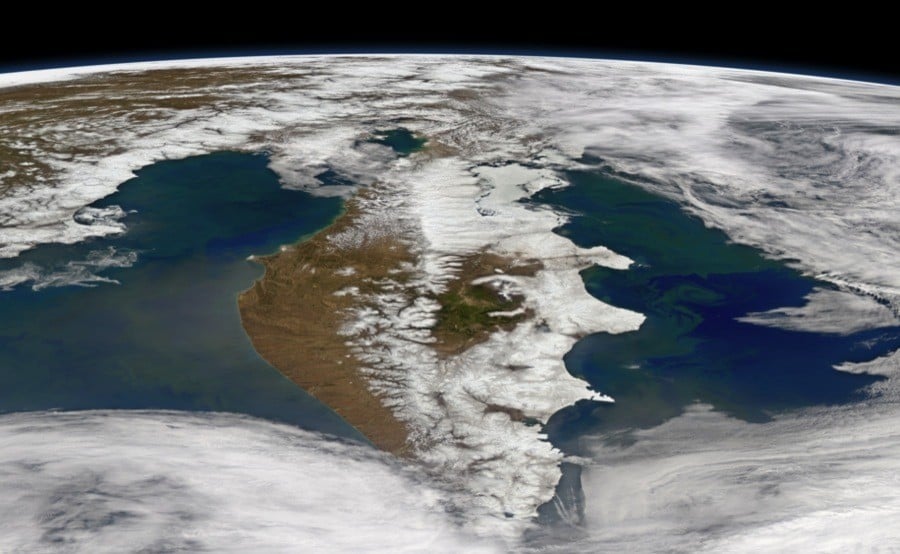 This is what Kamchatka looks like from outer space. Source: Image by Norman Kuring, NASA Ocean Color Group 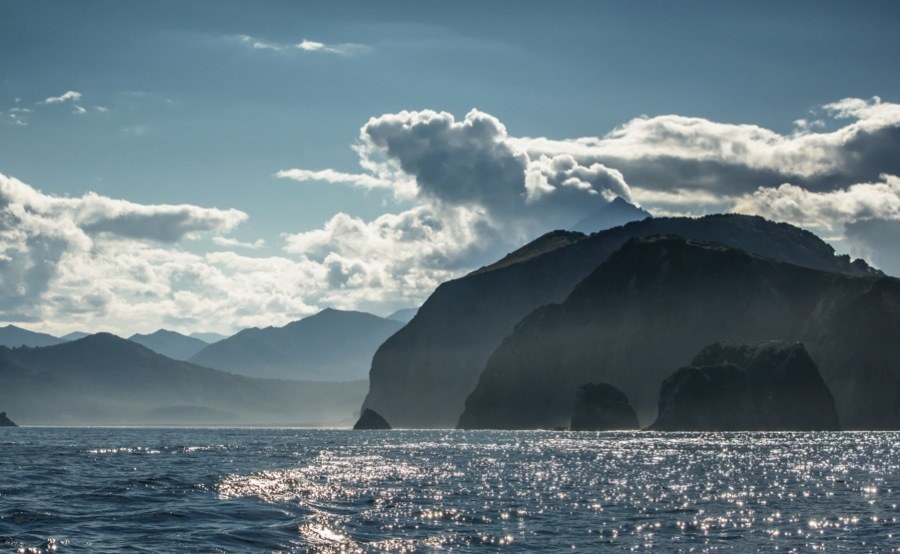 Rocky cliffs rise out of the cold waters of the Bering Sea in Kamchatka, Russia.

The mountain range that runs along the spine of the peninsula is stippled with 160 volcanoes.

Twenty-nine of these are active. It is the largest concentration of volcanic activity in all of Europe and Asia, and UNESCO has declared much of the area a World Heritage Site. The tallest of the peninsular volcanoes is Mount Klyuchevskaya, which stands over 15,000 feet in height. 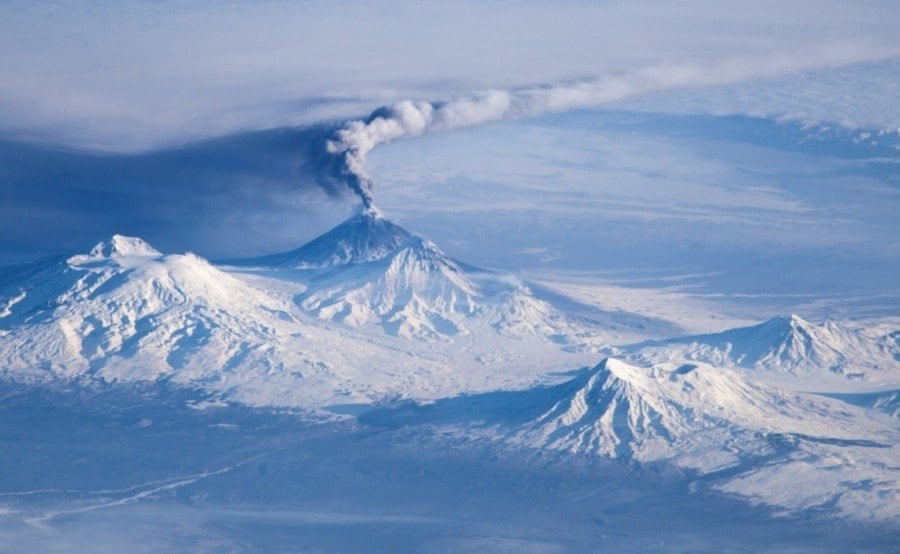 Mount Klyuchevskaya, the tallest volcano in all of Europe and Asia, smolders in this shot taken from the International Space Station. Source: NASA Earth Observatory 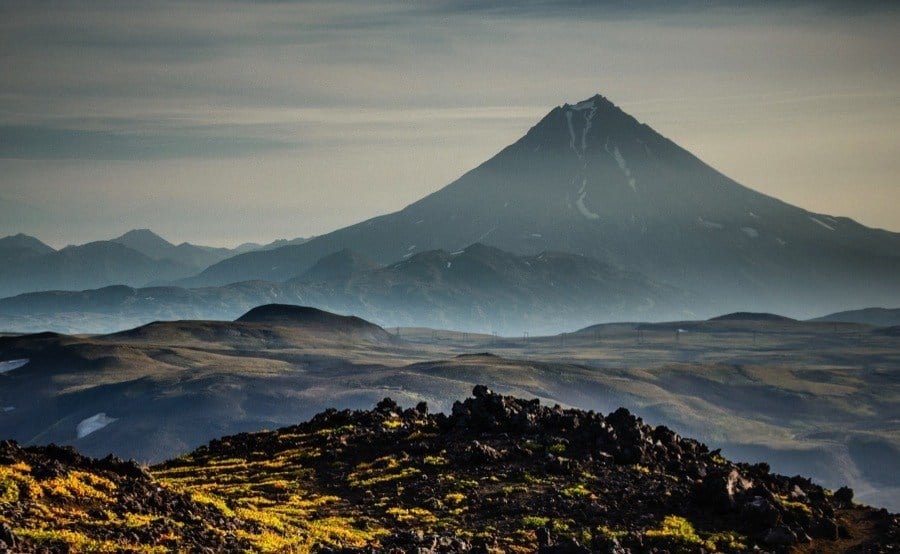 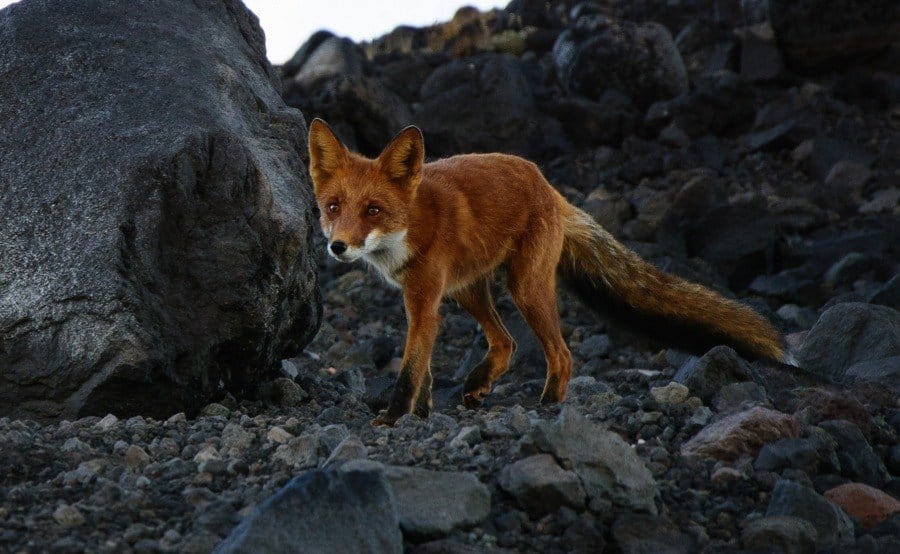 A fox hunts for food at the base of the Avachinsky Volcano.

Blanketed by snow from October to May, Kamchatka is a hard place to get to. During the Cold War, the peninsula was sealed off and used as a secret military staging ground.

Even today, the Russian military moves into this remote, unpopulated landscape for live-fire drills, such as the one involving 500 servicemen in the Missile Battalion and Russian Coast Guard that took place a few weeks ago.

Due to the difficulty of traveling to the area, most visitors to this rugged region have been wealthy adventurers looking for an adrenaline high between board meetings. They pay out for the best guides and gear or hire helicopters to whoosh over the wilderness at low altitudes in order to get a rare glimpse of brown bears or a flock of puffin. A couple of new hotels are going up to cater to Kamchatka’s high-roller tourist set, including an ice hotel where guests can sleep in luxurious sub-zero igloos. 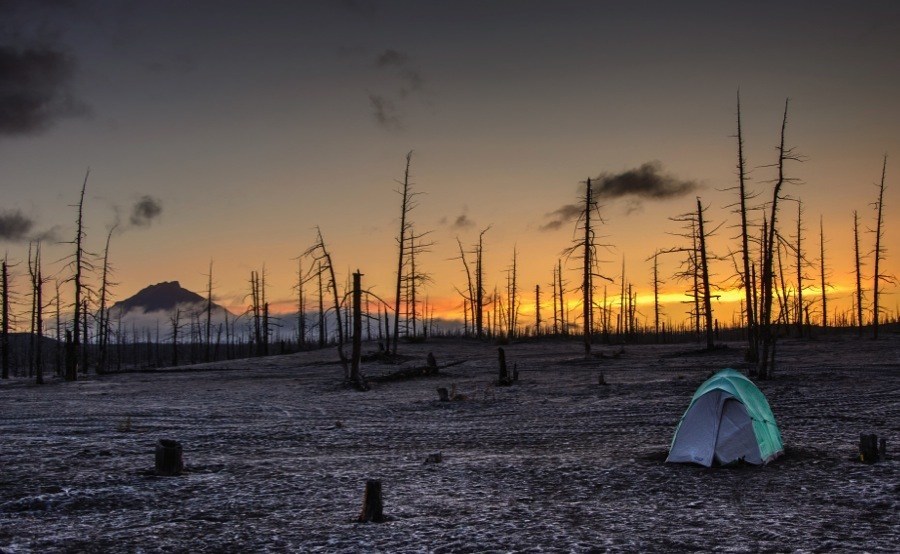 A hiker’s tent stands alone in the barren, but beautiful wilderness of the Kamchatka Peninsula. Source: Flickr.com

It is almost certain that these new hotels will be able to fill their rooms. There is something profoundly enticing about the beauty and remoteness of Kamchatka.

In its official citation of the peninsula’s volcanoes as a World Heritage Site, UNESCO calls the area “a landscape of exceptional natural beauty with its large symmetrical volcanoes, lakes, wild rivers, and spectacular coastline.” Here’s hoping the new hotels will not spoil the pristine grandeur of one of the world’s most sublime regions.