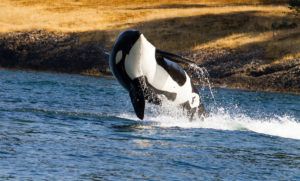 They don’t get their name for nothing.

On Tuesday, a Russia-based adventure tourism organization released footage of a pod of orca whales — also known as killer whales — feasting on a minke whale in Russia’s Kamchatka Peninsula:

In the video, which company founder Mikhail Korostelev shot with a drone, viewers can observe several orcas chasing after a hapless minke whale to the point of the whale’s exhaustion. The fatigued minke — which measures in at 23 to 26 feet upon reaching maturity — drowns.

The orcas then make quick work of cashing in on their prize, and according to National Geographic elect to eat the whale’s tongue first. Soon enough, the orcas have consumed their prey, leaving just the whale’s dorsal fin floating about the region’s frigid waters.

And if you can believe it, people on the scene thought it was beautiful.

“Everyone was very excited — of course it is awful to see the whale suffer, but this is nature, and it is magnificent to come across a rare sight like an orca hunt up close,” Inessa Yuryeva, the tour coordinator, told National Geographic.

At least on the natural bit, Yuryeva is right: Scientists classify orca whales as apex predators, which means that they sit at the top of the food chain and thus are not considered prey to any other creature. Likewise, the massive cetaceans are able to live on fish and mammals — including, as this video shows, fellow whales.

While eating habits vary according to orca whale type, Tatiana Ivkovich, a biologist who saw the event, believes that the orcas in this case were transient orcas — which are relatively rare and often eat large mammals — as opposed to resident orcas, which are larger in number and subsist primarily on fish and squid.

Killing another massive mammal is no small order, however, which is why the transient orcas work together to acquire their next meal.

“To kill a whale is very difficult and takes a lot of energy,” Ivkovich said, “but they can do this by cooperating, and the whale is large so it provides food for everybody.”

This grisly encounter is just the latest in a spate of high-publicity whale stunts. In late June, killer whales were reported to have harassed Alaskan fishing boats for food, and in May, Californians documented a crazy killer whale murder spree in Monterey.

Next, read up on why cetaceans — a name for a category of whales, dolphins, and porpoises — are more intelligent than you give them credit for, and how they have been used to aid in national defense strategies.