"Children are quite simple, they wouldn't think such complicated thoughts about this. They'd just think that it's amazing for someone to be able to fly on a pole like that." 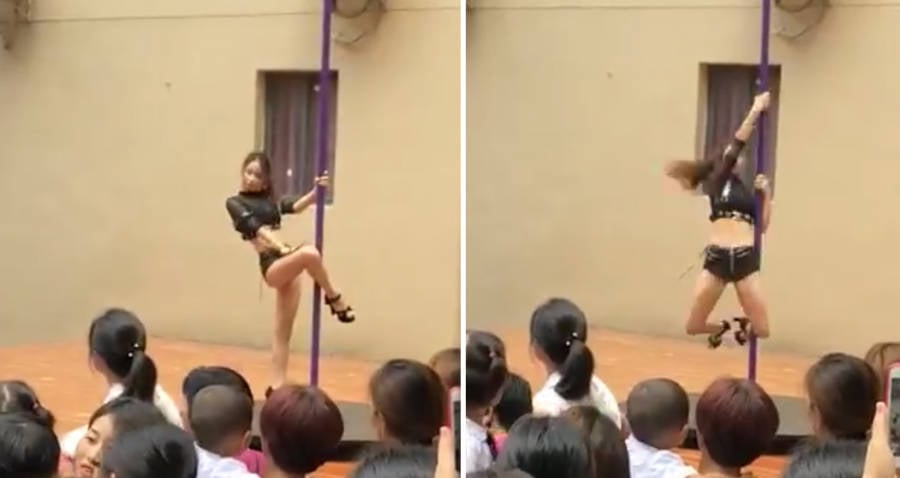 An extremely unconventional decision for a back-to-school celebration at a kindergarten in China has cost a principal her job.

On Sept. 3, hundreds of kindergarteners and their parents gathered together at the Xinshahui kindergarten in Shenzhen, in the southern province of Guangdong, to watch a female pole dancer perform her routine on a flagpole in the school’s courtyard, according to CNN.

Videos of the act quickly spread across social media, showing the scantily-clad woman sliding up and down the flagpole, which had a Chinese flag on it, while seductively flipping her hair in front of a crowd of children ages three to six.

In China on the first day of school, it is not unusual to have a ceremony to celebrate the occasion, according to CNN. However, those ceremonies usually include something a bit more tame, such as a speech by the principal or alumni.

It’s apparent that the principal of the kindergarten, Lai Rong, had her own interpretation of what she thought would be a good welcome-back performance.

Michael Standaert, an American journalist who is based in Shenzhen, caught the performance on video and took to Twitter to air his frustrations over the principal’s decision to showcase the dancer’s routine.

Principal Lai later told The New York Times that she thought the children would be impressed by the dancer’s skill and wouldn’t focus on other controversial aspects of the routine.

“Children are quite simple, they wouldn’t think such complicated thoughts about this,” she said. “They’d just think that it’s amazing for someone to be able to fly on a pole like that.”

According to The New York Times, Lai told one Chinese news outlet that she was trying to teach the children something new.

“The goal was to get the kids to learn more about one variety of dance,” she said.

Footage of the pole dancer’s routine in the kindergarten school’s courtyard.

This is not the first controversial decision that Principal Lai has made regarding performances at the school. Standaert, whose children attend the school, said that one demonstration before school let out for the summer nearly caused him to remove his children from the school.

“So before our kids got out of kindergarten for the summer, there was 10 days of military ‘activities’ and displays of machine guns and mortars at the door; now the principal has welcomed them back with a strip pole dance on the flagpole bearing the PRC flag. She’s gone nuts,” Standaert tweeted.

Standaert also tweeted that when his wife called the school to complain about the pole dance routine, Principal Lai told her it was “good exercise” and then hung up on her.

According to The Washington Post, Principal Lai issued an apology on Weibo, attempting to defend her decision. She said that she believed “inviting professional dancers to the kindergarten to perform for the parents would liven up the mood” on the first day back.

“I did not think through the contents of the performance … It was a very terrible viewing experience for the kids and the parents. For that I sincerely apologize,” she added.

Lai lost her job after severe backlash from parents erupted online. The school’s former principal told The New York Times that her life has been greatly impacted because of this one bad decision.

“My whole career in education has been destroyed by just this one event, just five minutes of performance,” she said. “The internet is too powerful.”

It’s safe to say that this is one first day of school that the students and parents of Xinshahui kindergarten won’t soon forget.

Next, discover some of the most fascinating facts about China. Then meet Xin Zhui, a 2,000-year-old Chinese mummy that is one of the most well-preserved bodies in the world.