The Legend Of Kit Carson, The Wild West’s Gentleman Explorer

Son of a Revolutionary War veteran, a Civil War veteran himself, and one of the first frontiersmen of the West, Kit Carson became an American legend during his own lifetime. 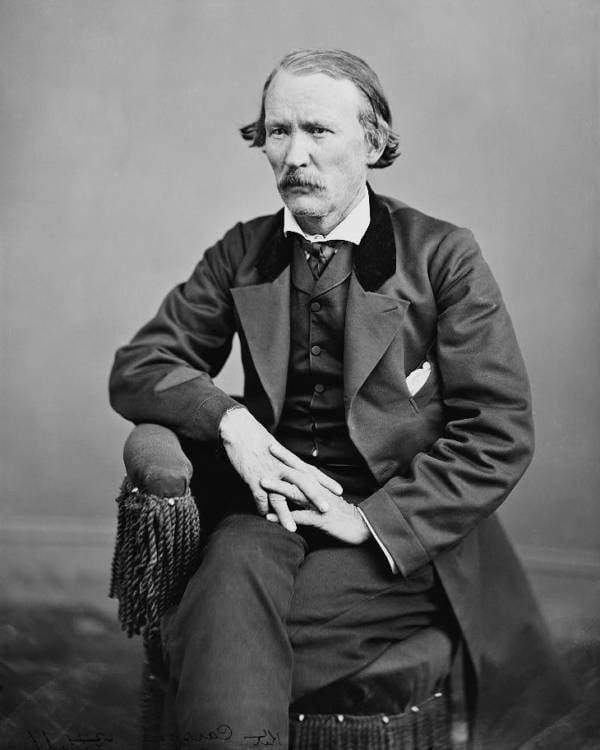 Kit Carson became a larger-than-life figure during his own lifetime, to the point that many people who met him were surprised by his unassuming manner.

American frontiersman, Indian scout, trapper, and altogether total mountain man Kit Carson became something of a legend in his time for his outlandish stunts and stories featured across the country’s news articles. Unfortunately, those stories were often embellished and many would come to suspect that once they met the mild-mannered man.

Kit Carson was born Christopher Houston Carson in Richmond, Kentucky, on Christmas Eve of 1809. His father Lindsey Carson was a Revolutionary War veteran who labored as a farmer. Rebecca Robinson Carson, his mother, was a cousin to American folk hero Daniel Boone and when Kit was just two years old, the couple relocated their family to land purchased from the Boone family in Missouri.

When Lindsey Carson died in 1818, the responsibility fell to Kit Carson to help his mother bring up his nine other siblings. Since most of his childhood was devoted to supporting his large family, Carson was never educated, a fact that caused him deep shame for the rest of his life and which he would often try to conceal. 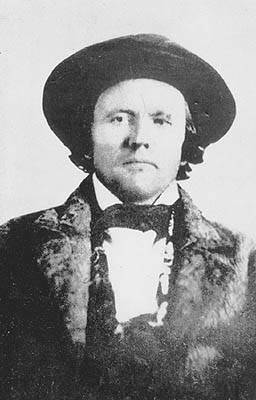 Wikimedia CommonsOne of the earliest known photographs of Kit Carson.

During the early 19th century, Missouri lay on the Western border of the United States and its residents were no strangers to the dangers this entailed. The Carson family would have been in the line of fire from any raids on behalf of the Native American tribes or bandits who roamed the territory. Carson would have been introduced to these harsh realities of frontier life at a young age.

But in 1822, Franklin, Missouri also became the starting point for the legendary Santa Fe trail, the path West into uncharted territory. Kit Carson heard stories of all kinds of adventures from men who had made their fortunes out West while he was apprenticing as a saddle maker in Franklin. In 1826, he decided to break off his apprenticeship and head west himself.

Kit Carson Takes On The West

Carson joined up with a merchant caravan and arrived in Santa Fe in November of 1826. The teenager initially worked a variety of odd jobs in the town, although he had soon picked up enough Spanish to serve as a translator and enough of the basics to be hired as a trapper.

In 1831, Carson joined the Irish frontiersman Thomas Fitzpatrick on an expedition to California where he learned to perfect his tracking and trapping skills. Despite his illiteracy, Carson had “an uncanny ability” to memorize geography, a skill which made him indispensable to tracking parties on the frontier. 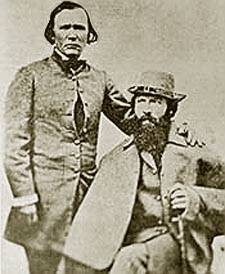 Wikimedia CommonsKit Carson (standing) with John C. Frémont, who hired him as a guide and eventually made him famous.

After a short stint as a hunter on the property of infamous trapper William Bent, Carson met explorer John C. Frémont while en route to his hometown. By now Carson had married and had children and was off to leave his daughter in a convent in Missouri, but he was in no mood to settle down. Frémont asked Carson to serve as a guide during Frémont’s mapping expedition of the Rocky Mountains and the Oregon Trail. The two would go on several expeditions together.

Frémont had many important political connections and the report that he published had a huge audience. The eager public devoured the stories of the party’s adventures with hostile Indians, ferocious grizzly bears, and uncharted territories, all starring Carson as the daring hero. Frémont’s report had the dual effect of not only inspiring many Americans to head West themselves but also of transforming Kit Carson into a national celebrity.

Meeting the real Kit Carson might have been quite a shock to the hundreds of Americans who had read the stories of his bold exploits. Although he may have been a larger-than-life hero on paper, in reality, the frontiersman stood at just five foot five and was extremely soft-spoken.

When William Tecumseh Sherman met Carson in 1847, the general recorded of their meeting,

“His fame was then at its height, from the publication of Frémont’s book and I was very anxious to see a man who had achieved such feats of daring… I cannot express my surprise at beholding a small stoop-shouldered man, with reddish hair, freckled face, soft blue eyes, and nothing to indicate extraordinary courage or daring.” 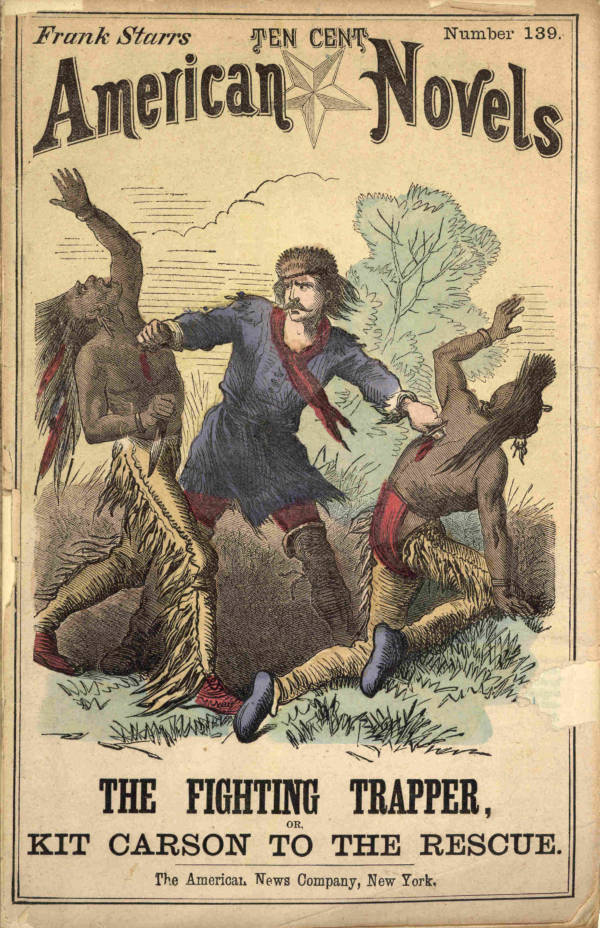 Wikimedia CommonsKit Carson was featured as the hero in dozens of dime novels which turned him into a living American folk hero.

In contrast to the reckless, hard-drinking, rough stereotype of the American frontiersman, Kit Carson was noted as being extremely reserved and honorable. Contemporaries described him as “clean as a hound’s tooth” and insisted that his “word was as sure as the sun comin’ up.” Yet Carson’s mild manners undoubtedly concealed tremendous courage and fierce resolve.

Like many celebs, Carson had a tumultuous love life and married some three times. With his third wife, Josefa, who was described as a “naughty” beauty, he had eight children. Meanwhile, Carson’s fame only continued to grow as the Westward Expansion of the United States proceeded at a rapid pace as conflicts with both natives and other European colonizers along the way sprang up.

In 1845 Kit Carson again joined forces with Frémont, this time on an expedition to California. Their scouting mission was soon interrupted by the Mexican-American War. The men found themselves fighting alongside American settlers in the Bear Flag Revolt against the Mexican government. That revolt ended in California becoming part of the United States. 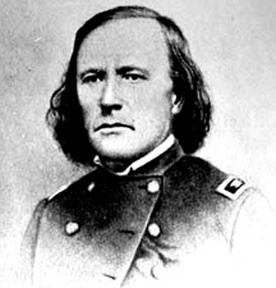 Wikimedia CommonsThe legend of Kit Carson only continued to grow during the Mexican-American war.

As is the case of the general history of white settlers and the native populations in North America, Carson’s interactions with the different Native American tribes he encountered were fraught with paradoxes. During his youth, Carson had frequent dealings with the natives, with whom he mostly got along with well enough.

Yet a large part of Kit Carson’s legend was his adventures as an “Indian fighter.” In 1849, Carson had the bizarre experience of tracking down a group of Apache who had kidnapped a white woman, Mrs. Ann White, in New Mexico, only to discover a novel starring himself as the Indian-fighting hero next to the unfortunate woman’s body.

Wikimedia CommonsNavajo prisoners taken by Carson, many of whom would perish during their forced march.

In 1853, Kit Carson was appointed to federal Indian Agent for northern New Mexico. At the time, the American government was trying to force the Western tribes onto reservations to make room for white settlers. When the Navajo refused to comply, Carson fought several vicious campaigns against them and destroyed their crops and livestock until the tribe was forced to surrender.

Although his official role may have been to enforce the government’s harsh conditions, Kit Carson evidently had tremendous sympathy for the people he had once lived with and would often personally try to negotiate fair terms for them. Carson fought for the Union during the Civil War, taking part in the bloody Battle of Valverde in 1862, although he spent the majority of the war waging campaigns against various Indian tribes in the West. 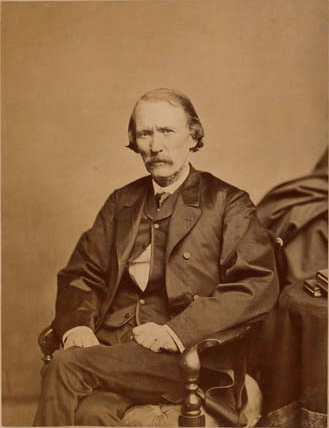 Wikimedia CommonsOne of the last known photographs of Kit Carson.

Carson’s wife died after complications with their eighth child in 1868 and Carson did not take well to her passing.

The year before he had been appointed Superintendent of Indian Affairs for Colorado Territory but shortly after the death of his wife his health began to fail, too. This made a trip to Washington to try and negotiate on the behalf of the Ute tribe difficult. The mission across the country had seemingly drained the last of his strength. The legendary frontiersman died in Fort Lyon, Colorado Territory in May of 1868 at the age of 58. His last words allegedly were, “Goodbye friends, adios compadres.”

Kit Carson is buried beside his wife in Taos, New Mexico.

After this look at frontiersman Kit Carson, check out these fascinating snapshots of life on the American frontier. Then, read about another famous frontiersman, Wild Bill Hicock.