The mysterious band of Catholic warriors was said to be keepers of the Holy Grail — the cup of Christ that they purportedly found during the Crusades. 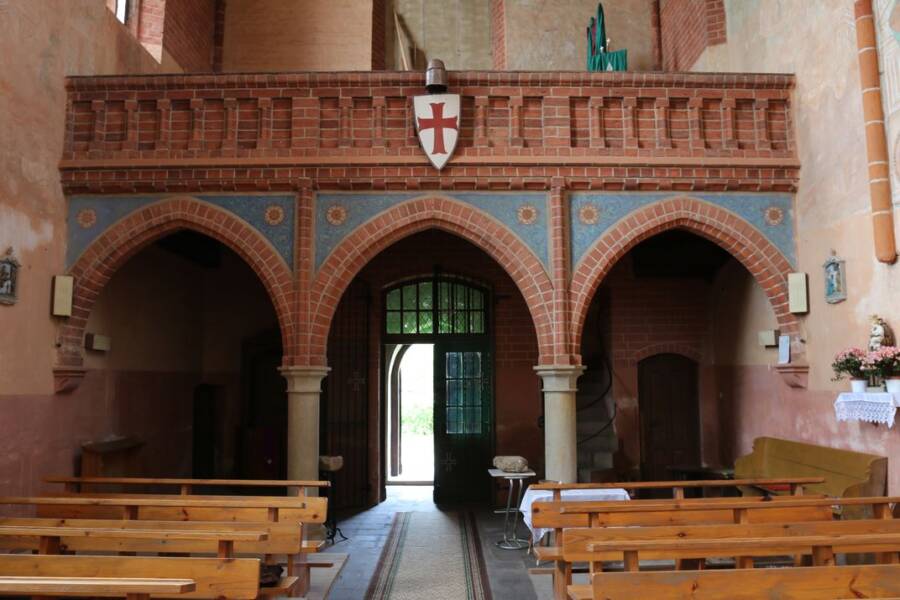 Archaeologists have uncovered a hidden crypt beneath a Polish church that not only yielded secret tunnels and the remains of numerous Knights Templar — but might also be the resting place of the Holy Grail itself. As one of the most sought after historical items of all time, the discovery is unimaginable.

From their participation in the Crusades to the secret initiation rites that led to their decline, the mysterious band of Catholic warriors has captivated historians for centuries. Said to be keepers of the Holy Grail, the secret passageways of this hidden crypt could bring this legendary artifact closer than ever.

“The legend says that Templars, under cover of darkness, sunk a wooden box with golden coins and the Holy Grail [into a since-dried lake mentioned in the stories],” said local historian Marek Karolczak, “and the treasure has either been stolen or lost forever in the swamp.”

According to Smithsonian, the ongoing archaeological dig began in 2004 — with last year’s use of ground-penetrating radar (GPR) responsible for the promising development. If found, the Holy Grail has been sitting under Chwarszczany’s chapel of Saint Stanislaus all along. 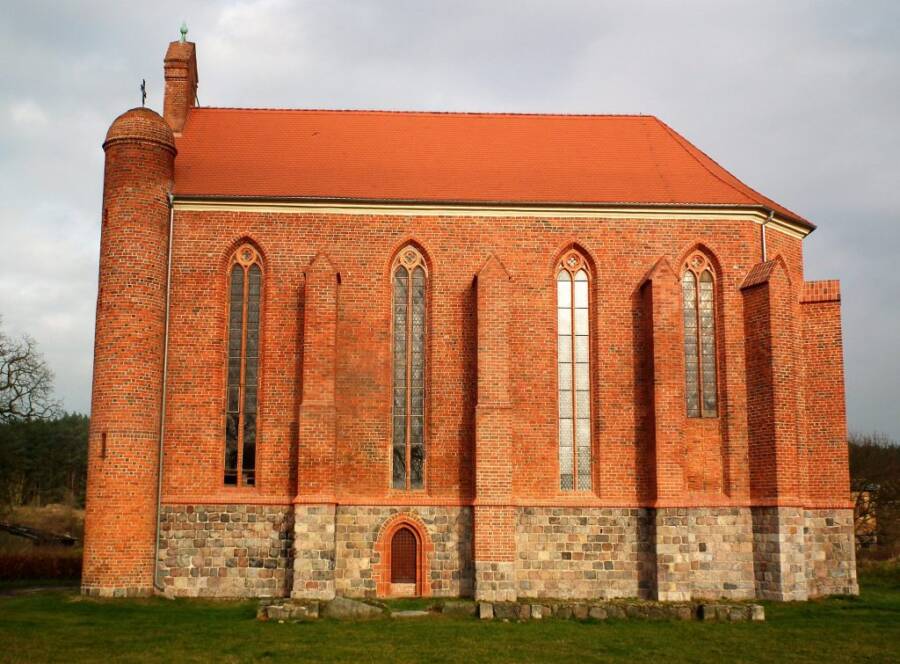 Wikimedia CommonsThe St. Stanislaus chapel in Chwarszczan was built by the Knights Templar in 1232.

The Knights Templar were formed in 1119, as the Christian Crusades ravaged the Middle East in hopes of wrestling the Holy Land from Muslim control. It was French knight Hugues de Payens who established the secret sect, as a small military order aimed to protect pilgrims traveling east.

While the group has inspired endless speculation and creatively liberated depiction in both literature and film ever since, their tangible contributions are quite real. Traces of this sect are visible all over Europe — namely in the Chwarszczany church constructed to testify to their permanence.

“Our GPR has detected gothic crypts with the remnants of Templar Knights beneath the chapel,” said lead archaeologist Przemyslaw Kolosowski.

With no more than 100 residents comprising the West Pomeranian village, Chwarszczany is a disarmingly quiet and uneventful place for such a find. Nonetheless, GPR doesn’t lie — and it’s indicated that a number of crypts, human remains, and an underground tunnel lies beneath.

“According to legends and medieval documents, there was a well in the vicinity of the chapel,” said Kolosowski. “Rumor has it that the well served as an entrance to a secret tunnel. This still requires an exhaustive archaeological investigation.” 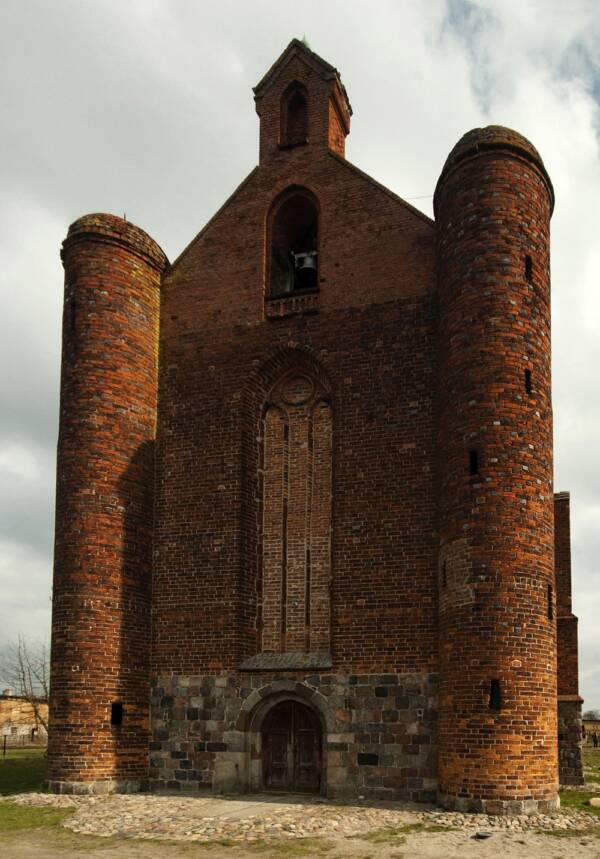 Though renovations and excavations at the church have continued for the last 16 years, the most captivating strides were made in July 2019. Kolosowski’s team began with an exhaustively comprehensive scan of the premises and surrounding fields, with around 100 volunteers helping out.

While experts were disappointed that their suspicions of a medieval fortress beneath the ground were dashed, unforeseen developments proved even more enthralling. Centuries-old cobblestone was uncovered. An 18th-century distillery. Bronze Age pottery. A 1757 coin left behind by Russian troops.

What archaeologists uncovered thereafter, of course, has been the most astonishing find of all. Studying a small depression beneath the stone floors, researchers uncovered seven vaulted crypts. Though some involved claim these “cannot be dated back to Templar times,” the debate is ongoing.

The Knights Templar not only built this church in 1232, but used its chapel as “both a place of worship and a defensive fortification.” As such, it is highly plausible that those buried beneath — and the uncovered passageways — are Templar-related.

To make matters even more enthralling, a secret underground tunnel has also been found beneath the town of Myślibórz. Settled by the Templars in 1238 — Myślibórz is half an hour away from Chwarszczany. 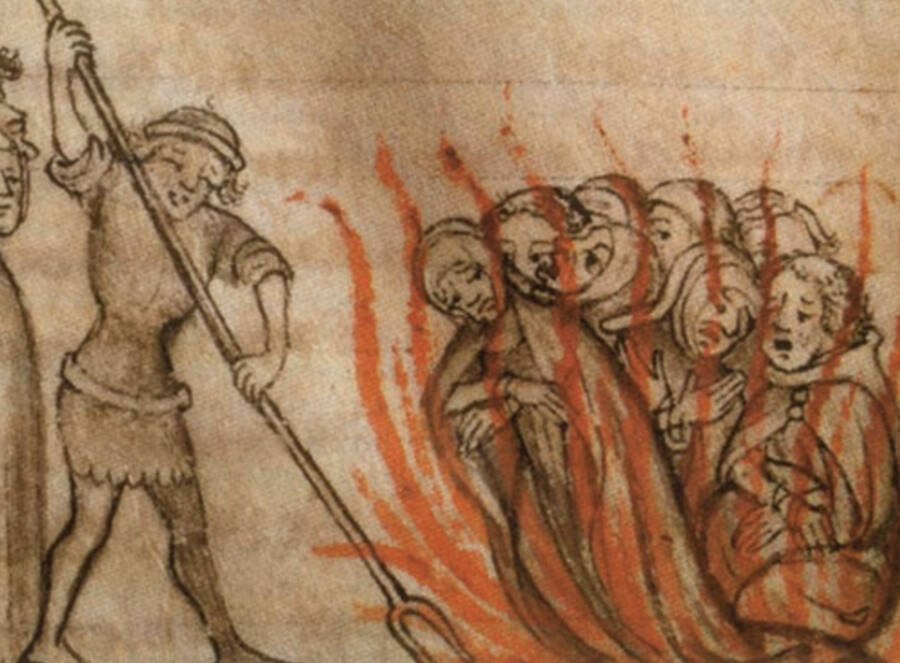 Wikimedia Commons“From the Creation of the World until 1384,” depicting the Knights Templar being burned at the stake.

“Back in those days, the appearance of Knights Templar on this soil was a popular trend,” said Karolczak. “This is the time of Crusades. Local rulers wanted to strengthen their power by inviting military orders to settle on their land and build commanderies.”

Though the Knights Templar had staunch support of the Pope and consequently enjoyed lavish donations and tax breaks, the tides began to turn in the early 14th century. Some believe their increasing secrecy and ominous initiation rites led to their arrest — others believe it was the money.

According to Ancient History Encyclopedia, King Philip IV of France ultimately ordered the Knights Templar arrested. Whether out of sheer desperation to seize the group’s enormous wealth for himself or make it clear that his political dominance outranked the papacy — the secret order was no more.

In 1312, King Philip IV ordered these detained men tortured, yielding presumably false confessions of sacrilege and homosexuality. Pope Clement V disbanded the group as a result, relegating the legacy of the Knights Templar to modern-day mystery and archaeological work.

Of course, the theory that this group managed to recover the Holy Grail during the Crusades has been most hypnotizing to those involved in this research. Said to be guardians of the Cup of Christ, it’s alarmingly possible that we’re about to find it.

After learning about the hidden crypt and remains of Knights Templar uncovered beneath a Polish church, take a look at 28 photos of the world’s biggest crypt — the Paris Catacombs. Then, learn about Otto Rahn and the Nazi crusade for the Holy Grail.