25 Leaning Tower Of Pisa Facts That Capture Its Iconic Appeal

These facts about the Leaning Tower of Pisa reveal everything there is to know about the world's most famous architectural mistake. 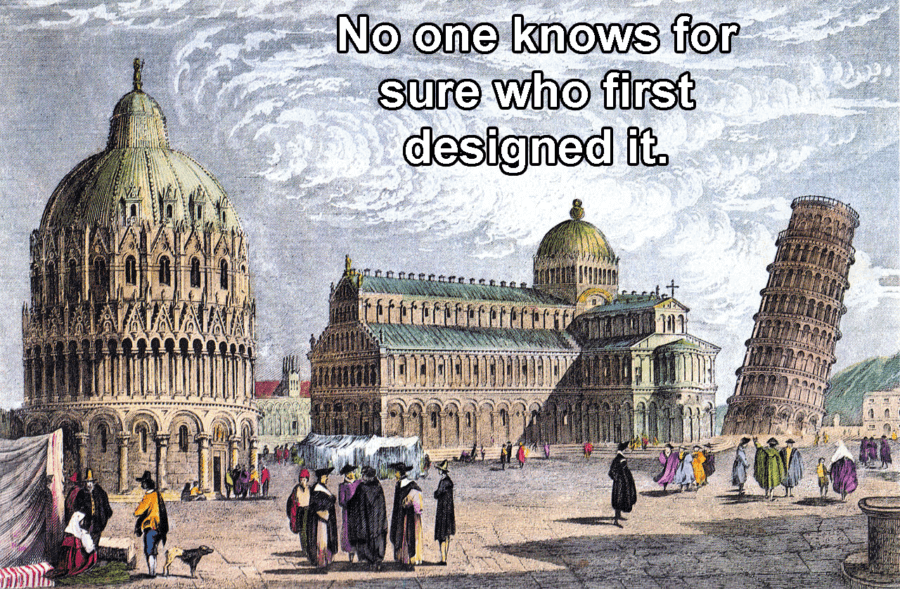 No one knows for sure who first designed it. Experts have tossed around at least three different candidates.Wikimedia Commons 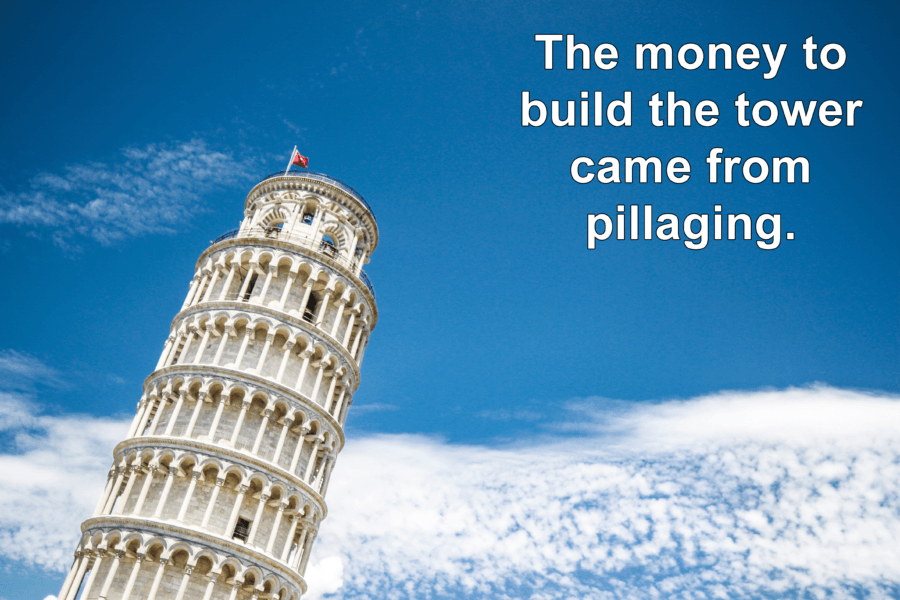 The money to build the tower came from pillaging. After Pisans attacked and looted the then-Muslim city of Palermo, Sicily in 1063, they used the stolen riches to fund the tower.Pexels 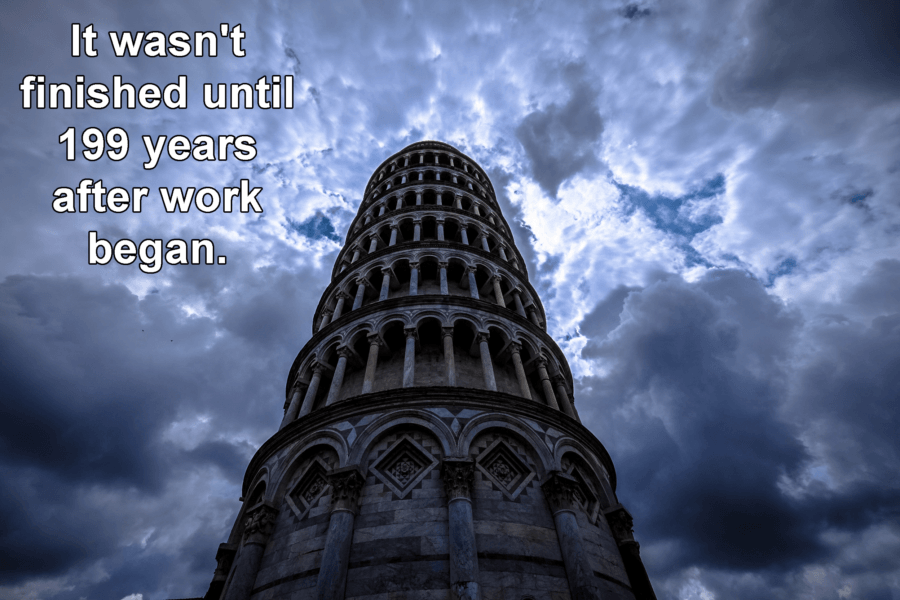 It wasn't finished until 199 years after work began. Construction commenced in 1173 and didn't end until 1372.Pexels 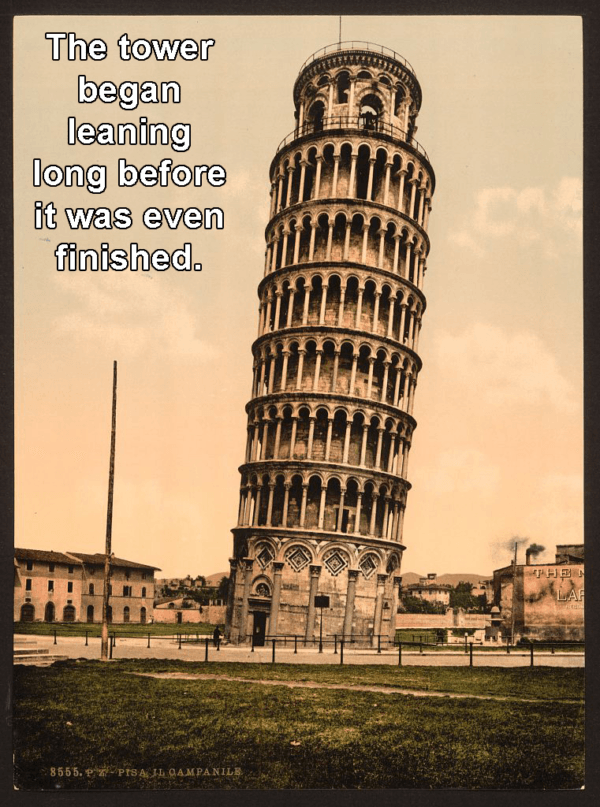 The tower began leaning long before it was even finished. The tilt began when builders were still working on the second floor in 1178.Library of Congress 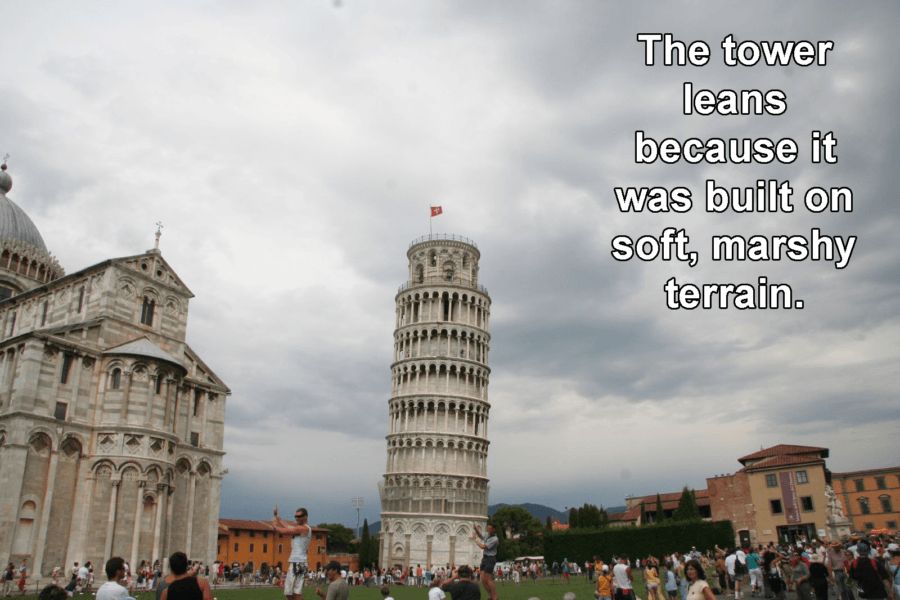 The tower leans because it was built on soft, marshy terrain. The loose, waterlogged sediment could not fully support the massive stone structure.Michael Furdyk/Flickr 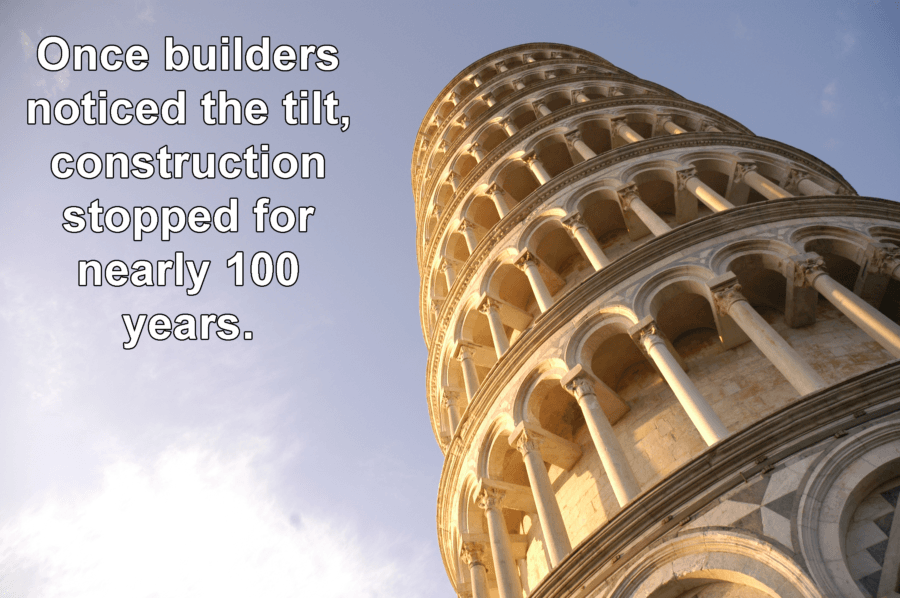 Once builders noticed the tilt, construction stopped for nearly 100 years. They stopped in 1178 and didn't resume until 1272.Pexels 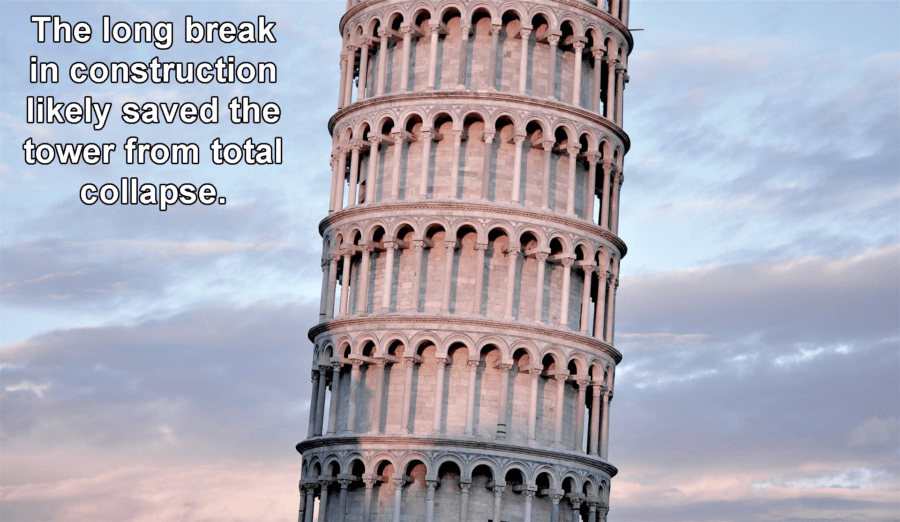 The long break in construction likely saved the tower from total collapse. During the rest, the stone compressed the terrain, making it firmer.PublicDomainPictures.net 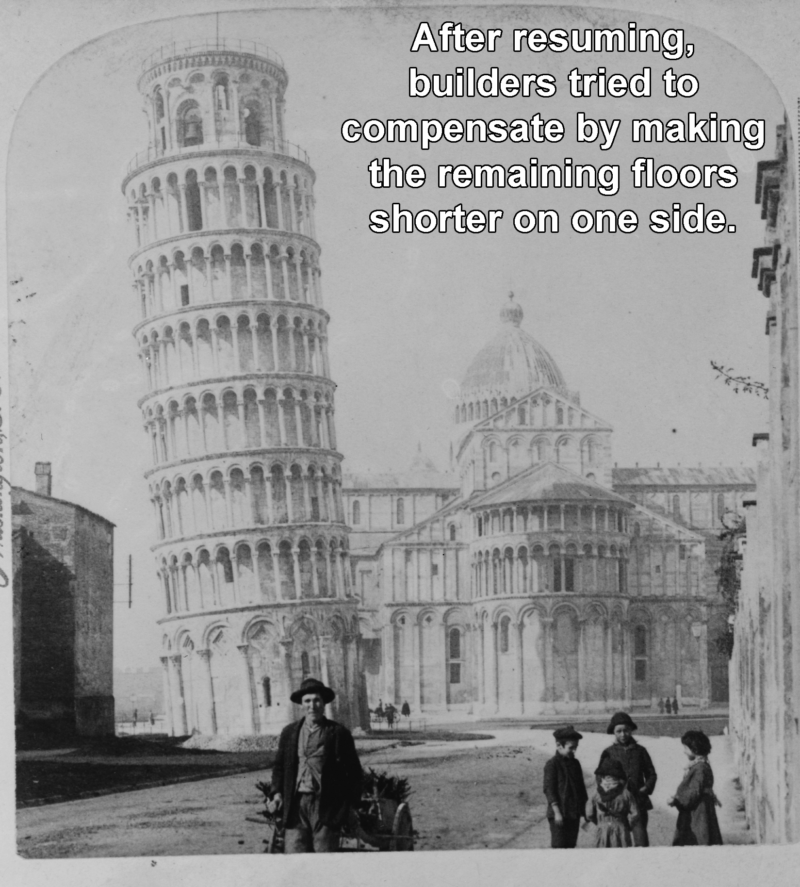 After resuming, builders tried to compensate by making the remaining floors shorter on one side. It didn't work.J.F. Jarvis/Library of Congress 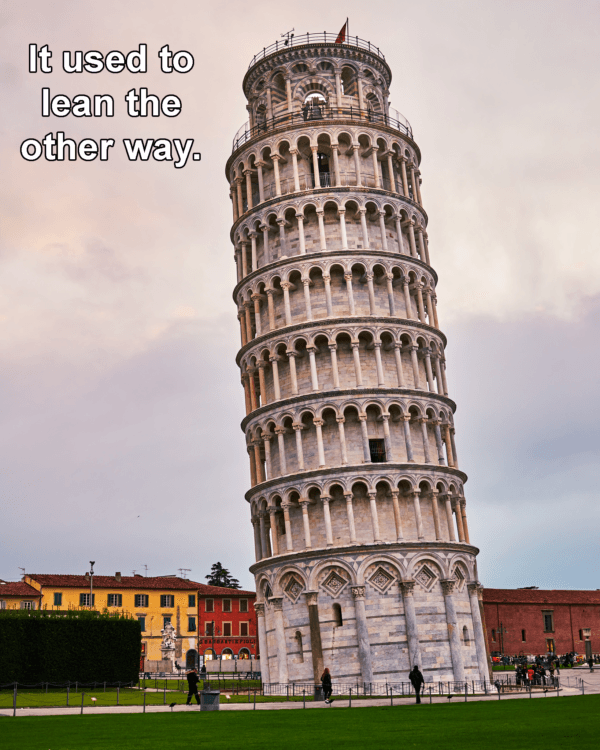 It used to lean the other way. Overcompensation during the second phase of construction shifted the center of the gravity and the tilt went from northward to southward.Deensel/Flickr 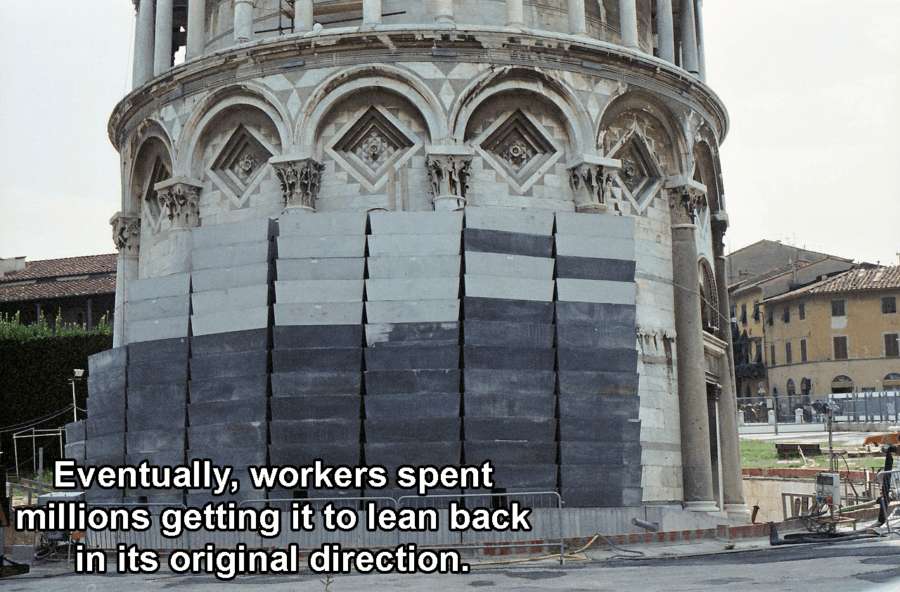 Millions were then spent trying to get it to lean back in its original direction. Between 1990 and 2001, the tower was closed so that workers could remove soil to correct the worsening southward lean, causing the tower to lean northward again.Wikimedia Commons 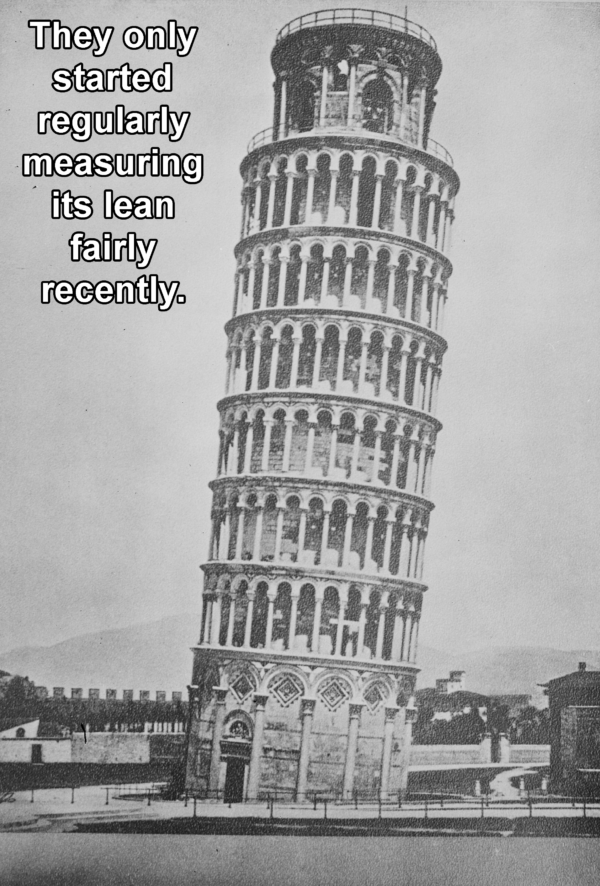 They only started regularly measuring its lean fairly recently. In 1911, regular measurements commenced, and then only annually.Library of Congress 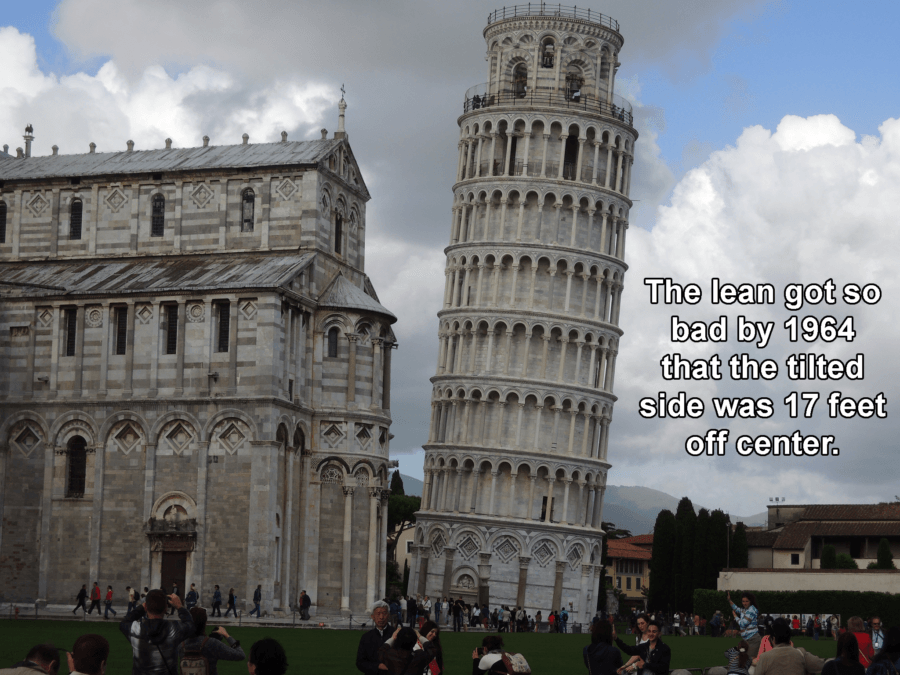 The lean got so bad by 1964 that the tilted side was 17 feet off center. The desperate government then put out an open call for suggestions on fixing it.BOMBMAN/Flickr 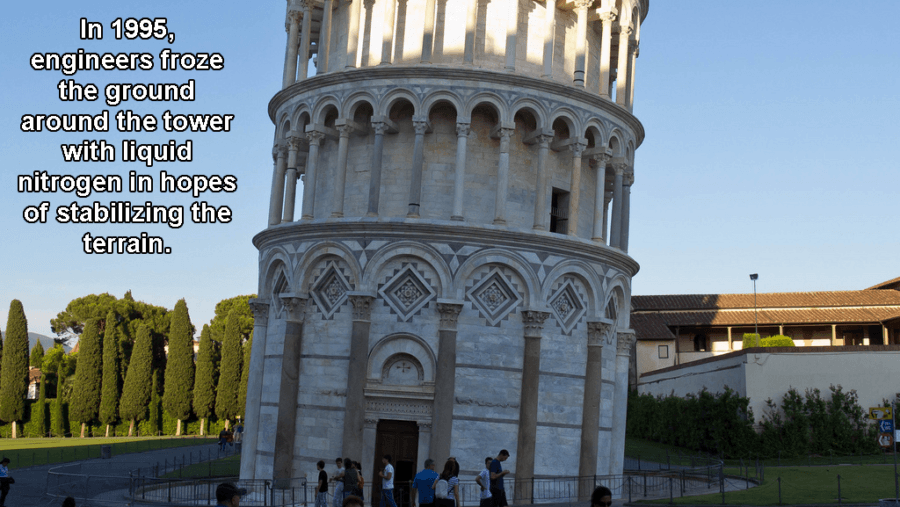 In 1995, engineers froze the ground around the tower with liquid nitrogen in hopes of stabilizing the terrain. It didn't work and the plan, which also involved installing underground anchors, was quickly aborted.Ed Webster/Flickr 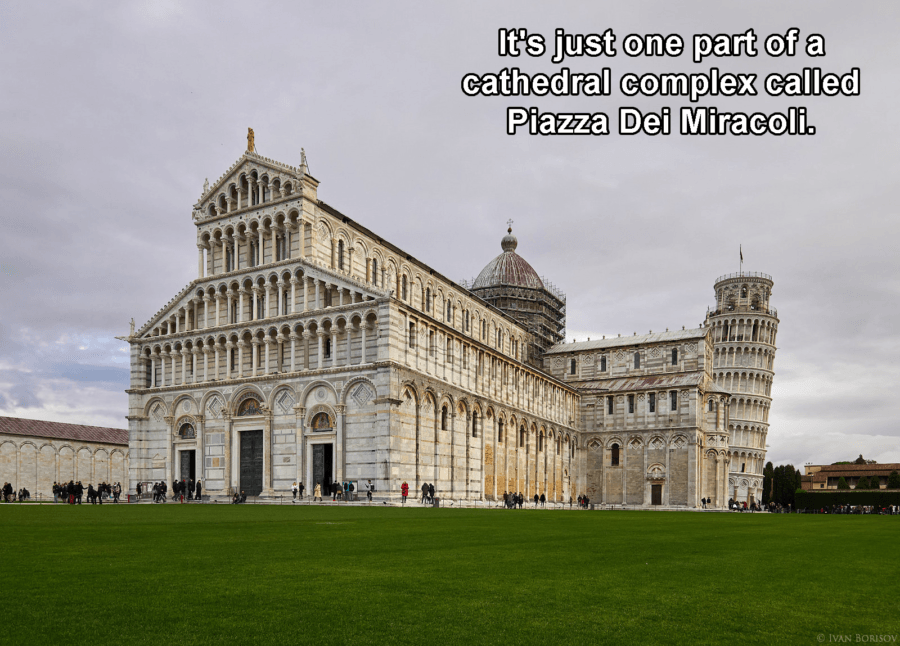 It's just one part of a cathedral complex called Piazza Dei Miracoli. This holy site includes half a dozen other ornate church buildings.Ivan Borisov/Flickr 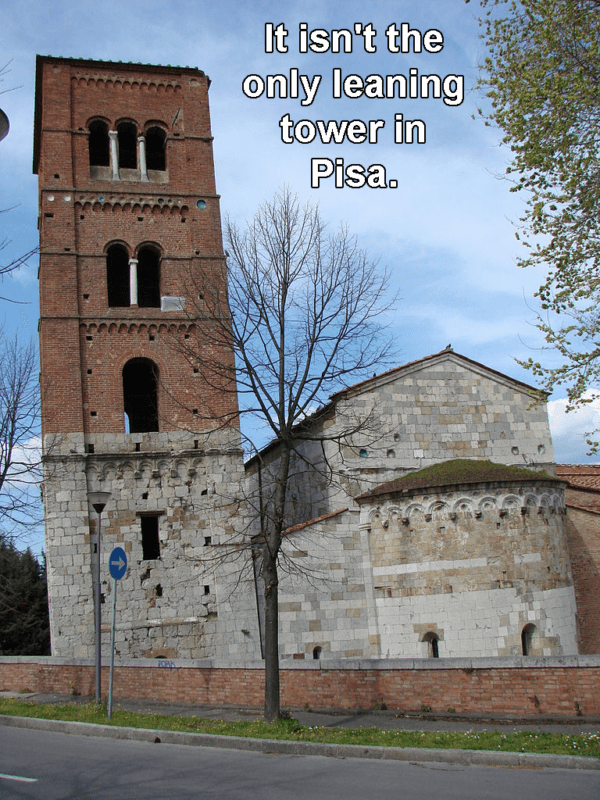 It isn't the only leaning tower in Pisa. The local terrain caused several other nearby church bell towers to tilt (including the tower of San Michele degli Scalzi, pictured), but not quite enough to look good on a postcard.Wikimedia Commons 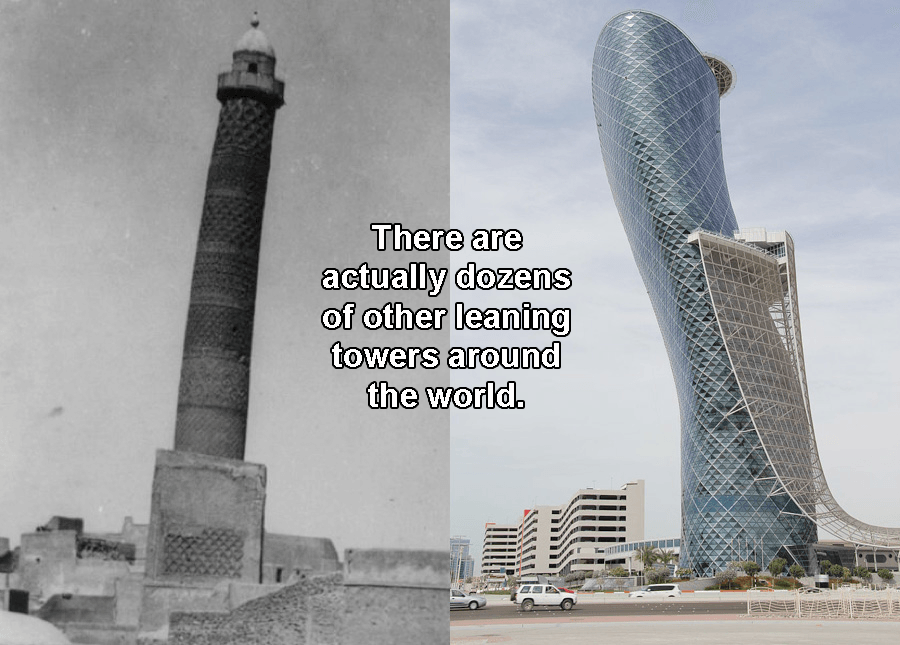 There are actually dozens of other leaning towers around the world. Some were made to lean, others weren't, and none are as famous as the one in Pisa (including the Great Mosque of al-Nuri in Iraq, left, and Capital Gate in Abu Dhabi, right).Wikimedia Commons 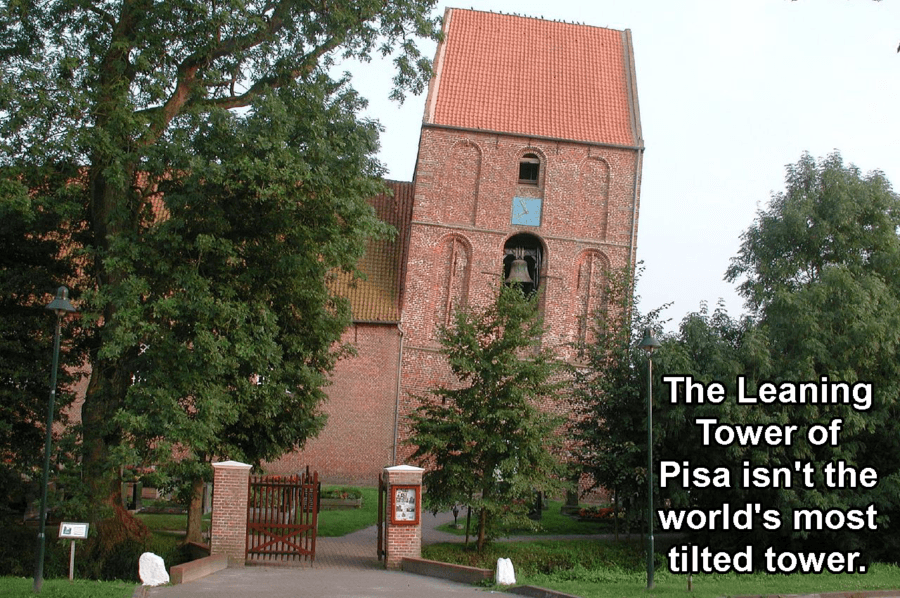 The Leaning Tower of Pisa isn't the world's most tilted tower. The church tower in Suurhusen, Germany has a larger lean, as do several other towers that were built to lean.Wikimedia Commons 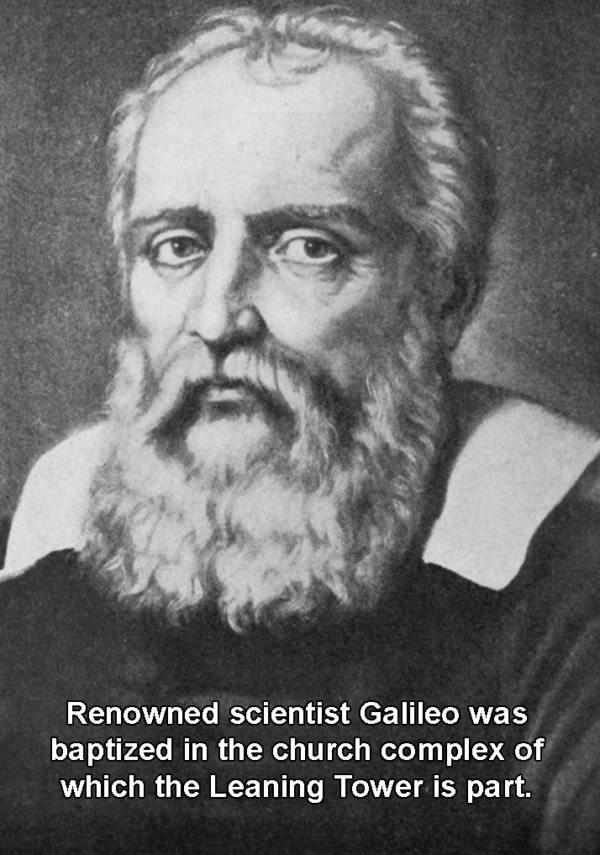 Renowned scientist Galileo was baptized in the church complex of which the Leaning Tower is part. Legend says that he developed his ideas about pendulums by swinging lanterns in the chapel.Wikimedia Commons 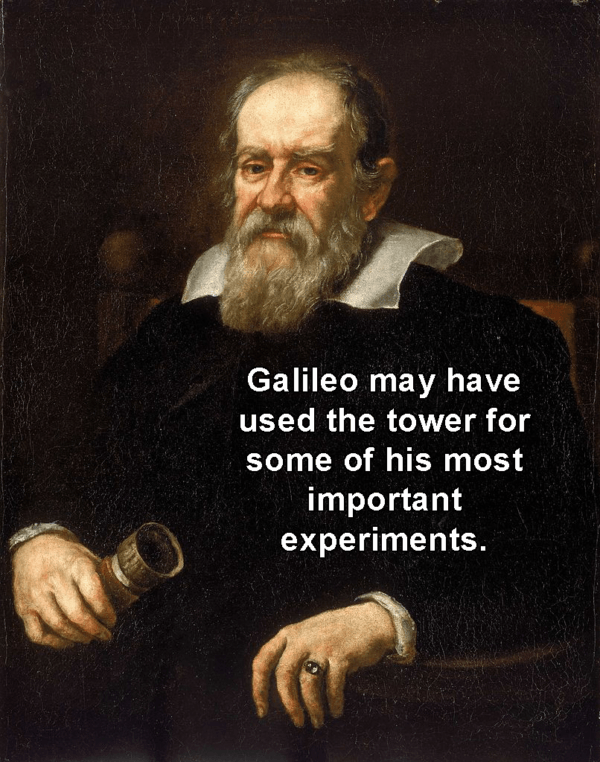 Galileo may have used the tower for some of his most important experiments. Stories say that he dropped cannonballs and feathers from the tower to show that objects of different weights fall equally quickly, but many now claim the story is apocryphal.Wikimedia Commons 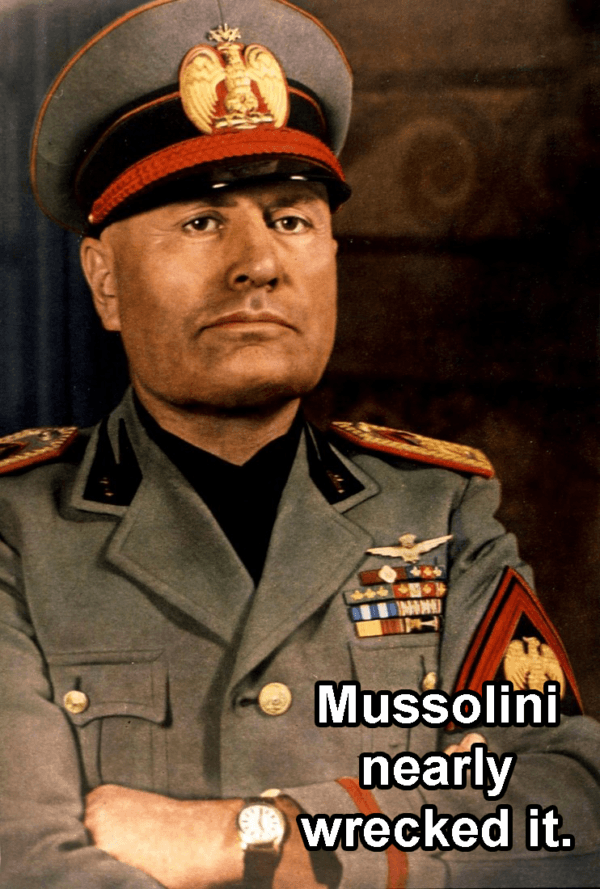 Mussolini nearly wrecked it. Believing a leaning tower wasn't appropriate in a fascist state, he tried to correct things by having concrete poured into the foundation in 1934, but that only made the tilt worse.Wikimedia Commons 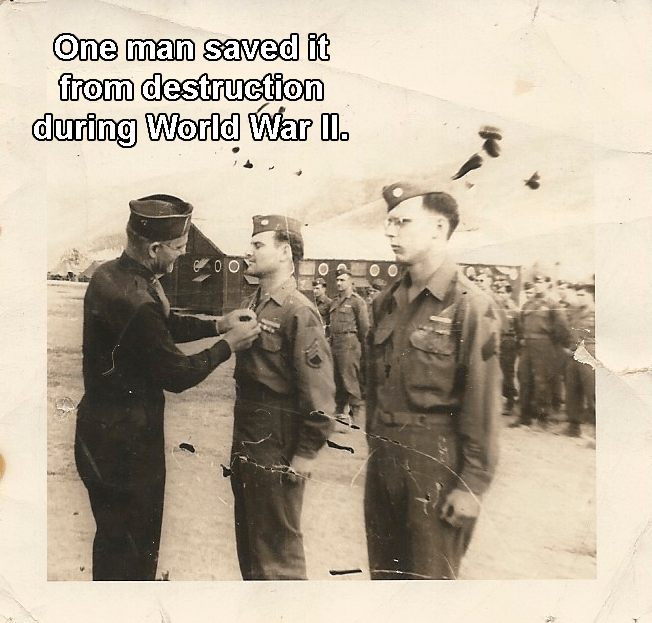 One man saved it from destruction during World War II. U.S. Army Sergeant Leon Weckstein (center) came very close to giving the order to blow the tower, a suspected Nazi stronghold, but couldn't bring himself to destroy such beauty.Leonweckstein.com 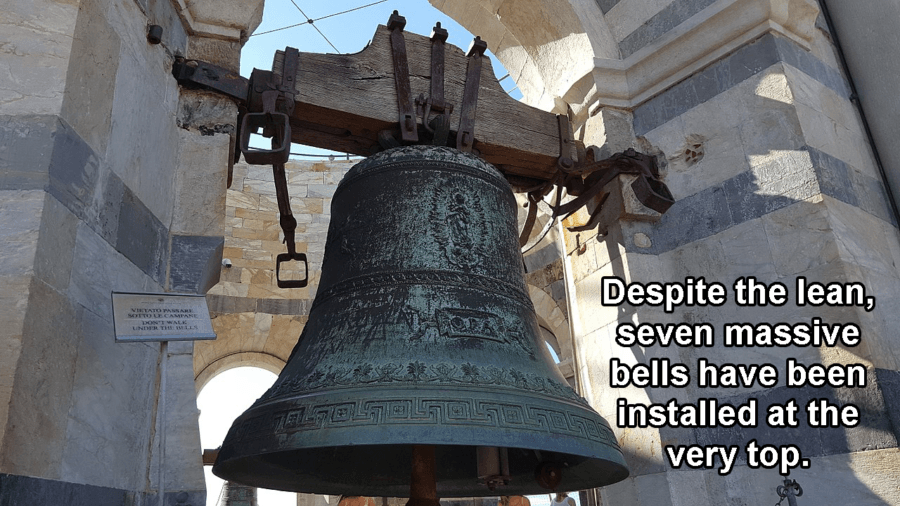 Despite the lean, seven massive bells have been installed at the very top. The largest, at 3.5 tons, is about one and a half times the weight of a rhinoceros.Wikimedia Commons 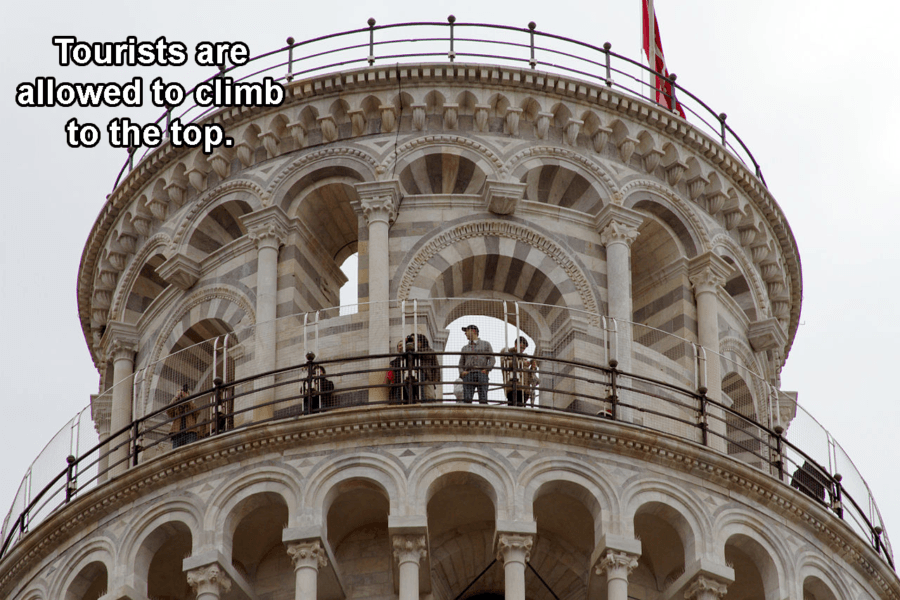 Tourists are allowed to climb to the top. Despite the hazards of the lean, ticket-holders can walk all the way up the stairs to the tower's highest point.Wikimedia Commons 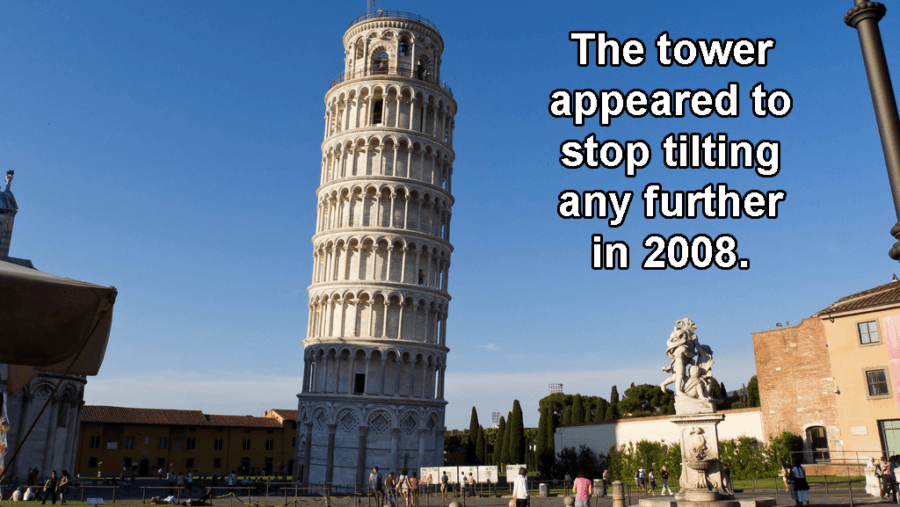 The tower appeared to stop tilting any further in 2008. Thanks to the restorations started in the 1990s, no additional leaning has been detected.Ed Webster/Flickr 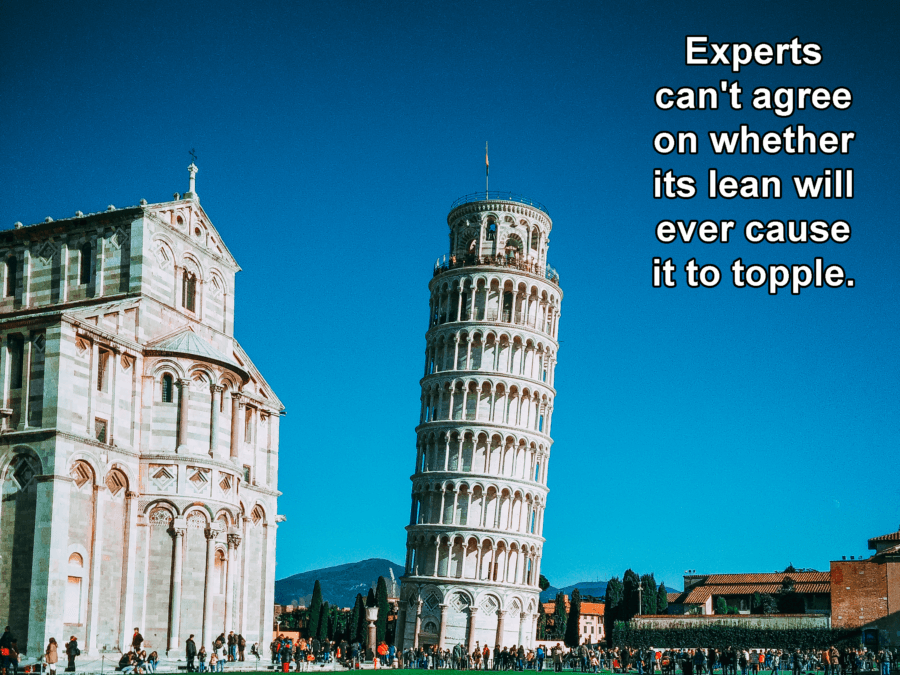 Experts can't agree on whether its lean will ever cause it to topple. There have been precarious moments but frequent restorations have been successful.Pexels

Italy was famous for its architecture long before many of those buildings became ruins. This is especially true in northern Italy where first the Romans then the Catholic Church have gone all-out to build temples, cathedrals, and other structures that have drawn crowds of tourists for centuries.

It’s ironic then that in a field with such stiff competition, arguably the most famous piece of architecture in the region is the one they messed up: the Leaning Tower of Pisa.

From the earliest days of its construction in the 12th century, the campanile at the Piazza dei Miracoli in Pisa, Italy was destined to be known as the Leaning Tower. To find out why that tilt first started and discover some more of the most incredible Leaning Tower of Pisa facts, check out the gallery above.

After this look at these interesting Leaning Tower of Pisa facts, check out the craziest facts about the Eiffel Tower. Then, discover some of the most interesting facts you'll ever read.