Through breeding, kidnapping, and even murder, the Nazis' Lebensborn program aimed at creating a super race of Germanized children. 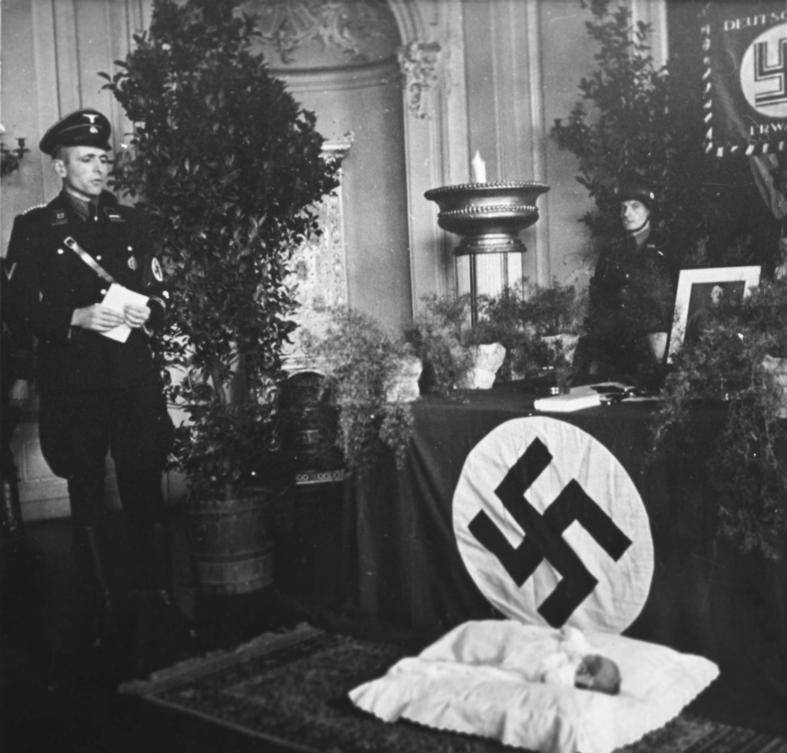 Among the cruelest policies put forward by the leaders of Nazi Germany — the ghettos, the concentration camps, the gas chambers — the Nazi Lebensborn program takes up a comparatively small portion of the public consciousness.

The reason, perhaps, is that the Lebensborn program was the inverse of Hitler’s genocidal policies. While other legislation focused on isolating and destroying those the Nazis considered unworthy, Lebensborn was meant to repopulate society with the best of the best: a new crop of racially pure Aryan children.

Yet as with everything the Nazis touched, the project spawned sweeping cruelty, brought about devastating losses, and had far-reaching consequences for a new generation of European children.

Germany Seeks A Way To Save Itself From Disastrous Population Decline 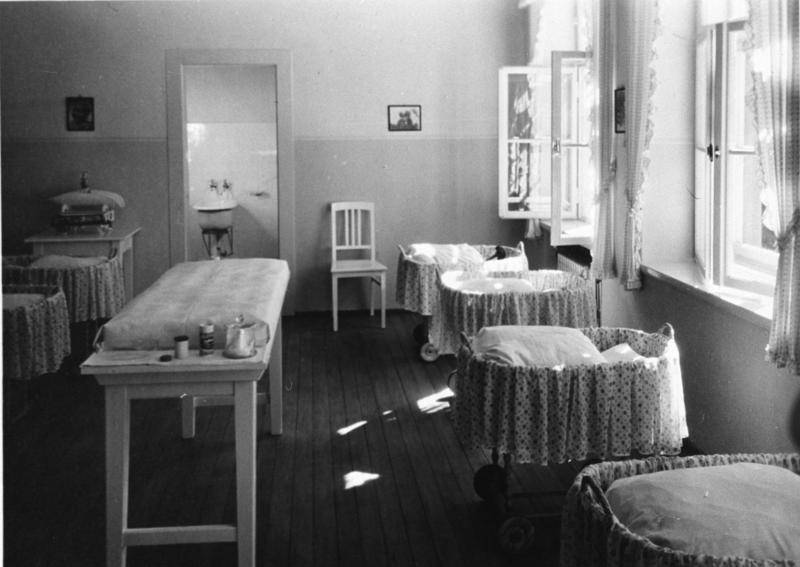 Lebensborn began as the solution to a problem: Germany was facing a demographic catastrophe.

World War I had decimated the country’s young male population. Nearly 2,000,000 German soldiers were never coming home — a loss that had dire consequences for not only the years immediately following 1918 but the next decades as well. Those soldiers would never marry or start families, which meant the new generation of Germans would be a small group indeed.

Unsurprisingly, marriage prospects for German women in the 1920s and 30s were especially grim, a circumstance that led to a number of unwanted out-of-wedlock pregnancies.

In 1935, the German government estimated that as many as 800,000 pregnancies were ending in abortion every year.

To Adolf Hitler and Heinrich Himmler, this was an unconscionable waste of young Aryan children who might be swelling the ranks of the nation’s depleted population and bringing them closer to their goal of a racially pure society.

It was in that context that the Lebensborn program was created.

On its face, Lebensborn, meaning “Fount of Life,” appeared modest: It would establish a number of excellent facilities to offer the pregnant wives of S.S. officers free prenatal and postnatal care.

The mothers and babies would be looked after scrupulously while their husbands ran the Nazi regime, and — with no financial or healthcare concerns to hold them back — the couples would be encouraged to procreate as often as possible.

But the officers of the S.S. couldn’t be expected to repopulate Germany singlehandedly.

That was when head Nazi S.S. officer Heinrich Himmler got involved. 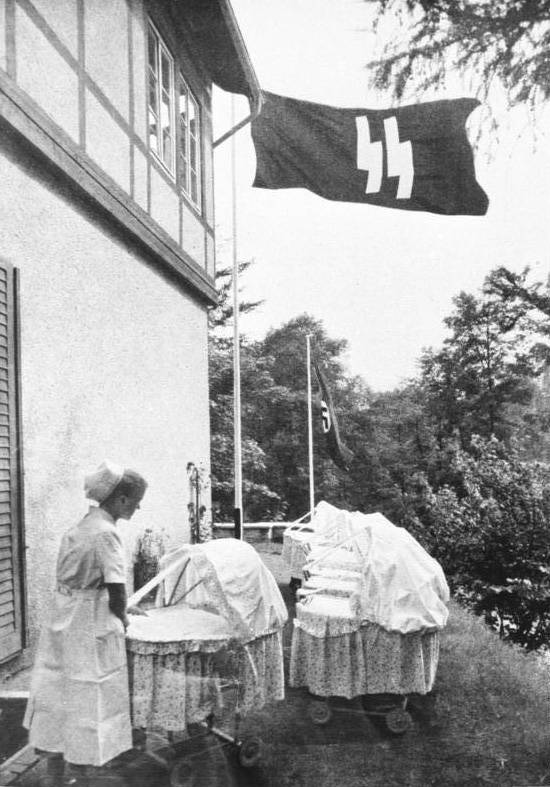 In 1935, Himmler began a propaganda campaign inviting any unwed mother who fit the racial profile to give birth inside a Lebensborn home.

It was an ambitious pledge, as it sought to turn a centuries-old attitude about unwed mothers on its head. No longer was having a child out of wedlock a source of shame — instead, the Nazi regime would celebrate the birth of any Aryan child, regardless of its parents’ marital status.

Himmler swore that any pregnant woman who qualified would be brought to a Lebensborn facility quietly, offered the best of care free of charge, and then returned home after giving birth with no one the wiser about her long absence.

If she wasn’t prepared to raise her child herself, the program would help her find a suitable Aryan family interested in adoption.

The policy’s generosity, however, was limited. It discriminated strictly, not on the basis of wealth or social standing, but by genealogy. Only proof of paternity and a racially pure family tree dating back three generations gained you access. The result was an acceptance rate that hovered around 40 percent. 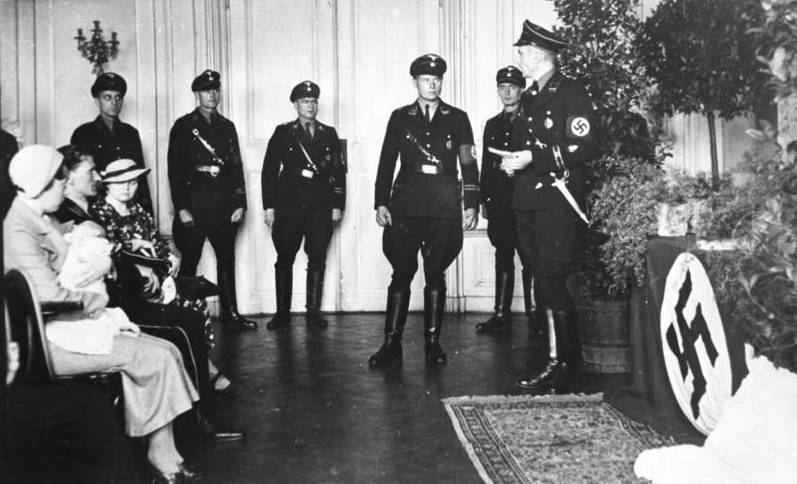 Yet even the government’s open-arms approach to unwed mothers wasn’t enough to dramatically change the numbers. So Himmler took the Lebensborn program one step further.

He began arranging secret meetings in which “suitable” women could meet S.S. soldiers and, if both parties were amenable, create more babies for the Nazi party — with no offer of marriage on the table.

A report to the Ministry of Justice stated:

“Leaders of the [League of German Girls have] intimated to their girls that they should bear illegitimate children; these leaders have pointed out that in view of the prevailing shortage of men, not every girl could expect to get a husband in future, and that the girls should at least fulfill their task as German women and donate a child to the Fuhrer.”

At the same time, a 1938 reformation of the German divorce laws made it easier for men to leave wives in their late forties and fifties to marry younger women — women who could have children.

Approximately 30,000 divorces occurred in Germany within the next two years, and 80 percent of them fell into this category. 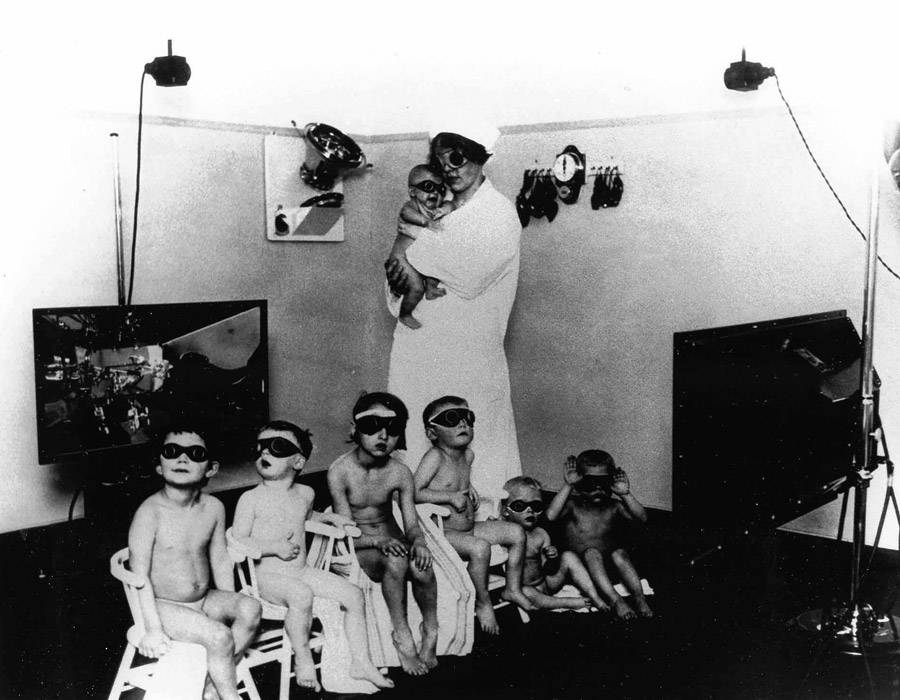 The German Reich was doing its best to make motherhood into an Olympic event, issuing a Mother’s Cross of Honor in three classes: bronze, silver, and gold. The lowest rank required a woman to conceive and raise at least four children, while the highest honor recognized a woman who had given birth to eight or more.

Those who bore the Mother’s Cross of Honor received unique privileges: they could jump to the front of lines, receive government subsidies designed to help them care for the kids, and even have special access to the best meats from butcher shops.

But not every German citizen was on board. Some felt the Lebensborn program’s emphasis on motherhood came at the expense of sexual morality.

In towns where Lebensborn facilities sprang up — often in homes and buildings where German Jews had lived before their forcible removal to ghettos and concentration camps — the unwed mothers were treated with suspicion and sometimes outright anger. 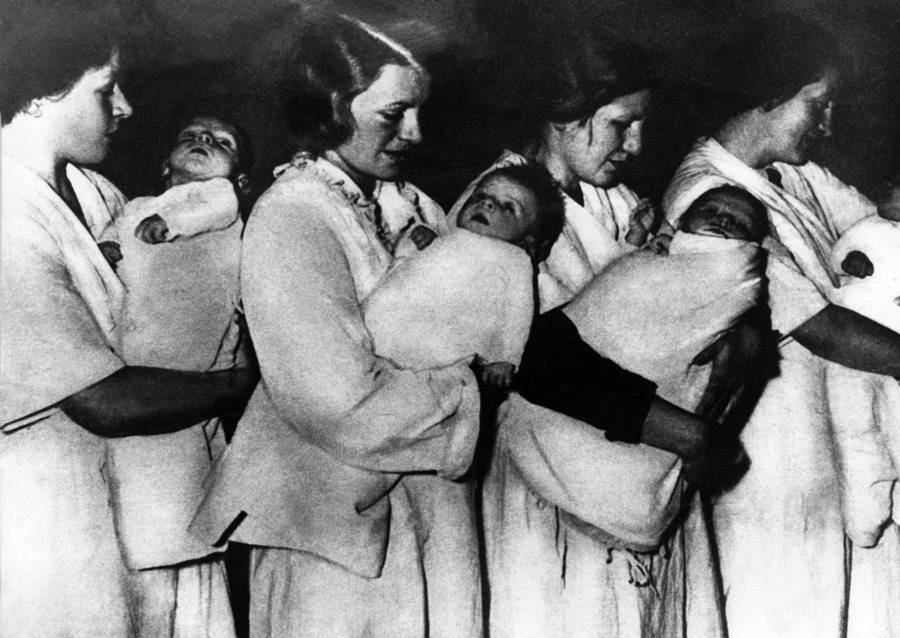 Though Himmler’s propaganda was raising the birthrate, it couldn’t change society overnight. For that, he would have to look outside Germany’s borders.

In 1939, the Nazi regime began to take an interest in the children of the European countries it had conquered.

Fair-haired and blue-eyed orphans in occupied Europe began to disappear and reappear in Nazi Lebensborn facilities, where the youngest would be put up for adoption and the oldest sent on to boarding schools for retraining and Germanization.

S.S. soldiers began to take Aryan-looking children in Poland and Yugoslavia, often in plain sight of their parents, and spirit them back to Germany to be reeducated.

Those who resisted their training or proved insufficiently Aryan were sent to perform hard labor in concentration camps — a death sentence for small bodies. 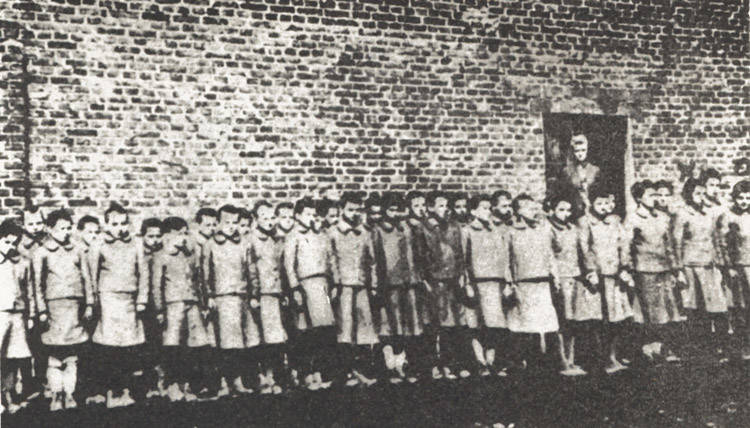 Reportedly, Himmler stated, “It is our duty to take [the children] with us to remove them from their environment, if necessary by robbing or stealing them.”

When confronted by the cruelty of this action, he retorted, “How can you be so cruel as to leave on the other side a brilliant future enemy who later on will kill your son and grandson?”

The stolen children were told to forget their old names and their parents. Many were convinced by authority figures that their parents didn’t want them anymore. Germany was their home now, and they were to pledge allegiance to it with pride.

Destruction And Chaos In The Final Days Of The Lebensborn Program 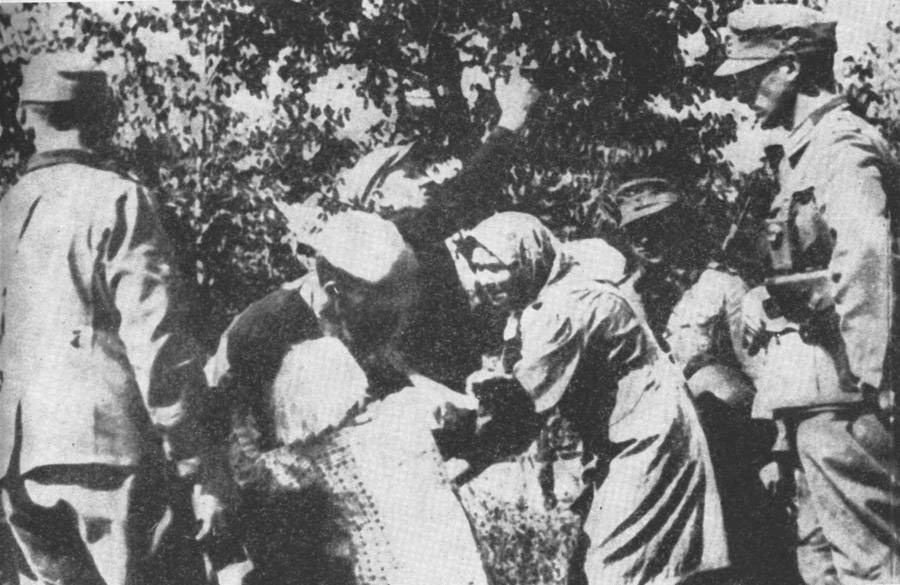 Wikimedia CommonsA child ripped from their parents in Poland for the Lebensborn program.

As the tide of the war turned in the Allies’ favor, the S.S. leadership grew desperate.

Himmler now declared that every S.S. soldier should father at least one child before going off to war. He assured the soldiers that while they fought, the mothers and babies would be cared for in a Lebensborn home.

But the new patriotic attitude toward sex was already beginning to take a toll: venereal disease was rampant, and it only grew worse as the Lebensborn program spread to other areas of occupied Europe.

Maternity wards sprang up in France, Belgium, the Netherlands, Poland, Norway, and Luxembourg. Their patients were eligible women who had become pregnant by Nazi soldiers — sometimes by their consent, and sometimes not. 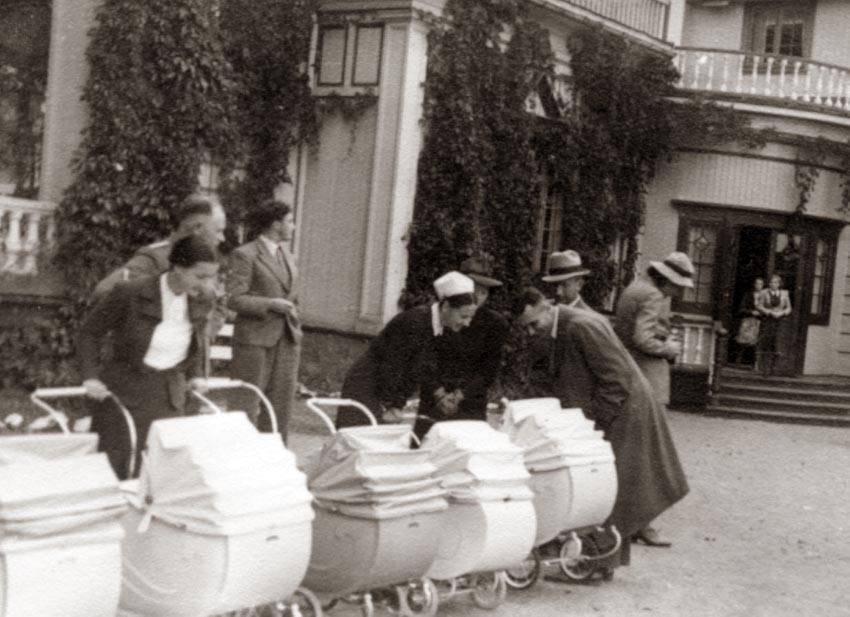 National Archives of Norway/FlickrThe first Lebensborn mother and birthcare home in Norway just a few weeks after its opening in September of 1941.

An astonishing 8,000 to 12,000 children were born into Norway’s Lebensborn facilities alone.

When Germany was defeated and the war came to an end, the governments of the countries newly freed from Nazi rule had a difficult choice to make. What should be done with the houses full of unwed mothers — mothers carrying the children of invaders?

Norway’s government chose to continue to care for the inhabitants of the Lebensborn homes — an accommodation that the starving public resented. Many of the Lebensborn women were beaten or run off and their children bullied. 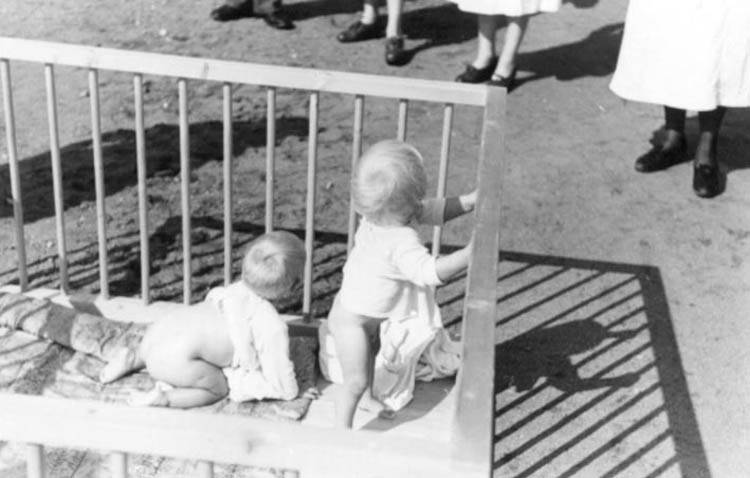 But the damage extended far beyond Norway. Of the Aryan-looking children zealous S.S. officers had kidnapped from other European countries, there was little to be discovered.

The Nazis destroyed almost all of the documents on the Lebensborn program as the Allied forces neared victory, leaving an estimated 200,000 victims separated from their families. Some made it home, but others couldn’t remember enough of their families to find their way back.

Still others remained convinced their original families didn’t want them and believed the retraining; they saw themselves as German citizens, for better or for worse.

The most famous child of the Lebensborn program is Norwegian ABBA singer Anni-Frid Lyngstad, who was fathered by a German sergeant. Her widowed mother escaped after the war and took her daughter to Sweden, where the government accepted several hundred refugee children and saved them from persecution.

Many parents chose not to tell their children about their heritage and the Lebensborn program, inventing better stories and fictional fathers for their young ones to believe in.

And some are still in the dark about their heritage to this day, unaware of the part that Adolf Hitler and Heinrich Himmler would have had them play in their quest to build a master race that would rule for a thousand years — the ultimate goal of Lebensborn.

After learning about the Nazis’ Lebensborn program, check out these photos that explain the Nazis’ rise to power, or read about the real Seven Dwarfs of Auschwitz.