Scientists Find These Meteorites Contain Everything Necessary For Life

The meteorites crashed in 1998 and have been studied by an international research team ever since. 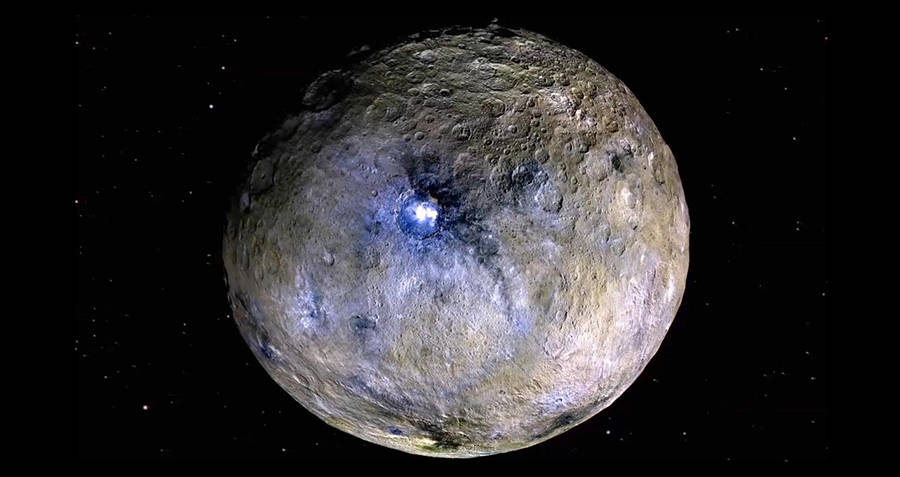 NASA
Ceres, the dwarf planet which is the suspected origin of the meteorites.

In 1998, two meteorites crashed to the ground that contained tiny blue and purple salt crystals. Now, almost 20 years later, scientists have revealed that the crystals contained the ingredients for human life.

In a study published in the journal Science Advances, scientists provided a comprehensive breakdown of the compounds found in the meteorites, which included organic matter and liquid water, a few of the things it takes to sustain life.

According to scientists, the two meteors likely circulated our solar system for billions of years before crashing down to Earth – one landing in a small Texas town, the other in Morrocco.

The crystals containing organic matter and water are thinner than the width of a human hair, but it was still more than enough for the research team to study, and draw likely conclusions from.

“We revealed that the organic matter was somewhat similar to that found in primitive meteorites, but contained more oxygen-bearing chemistry,” said Yoko Kebukawa, an associate professor of engineering at Yokohama National University in Japan and a member of the research team. “Combined with other evidence, the results support the idea that the organic matter originated from a water-rich, or previously water-rich parent body – an ocean world in the early solar system, possibly Ceres.”

Ceres is a dwarf planet that resides in the asteroid belt out past Pluto, which has been known to produce meteorites that fall to earth, along with the asteroid Hebe.

In addition to providing insight into the history of the solar system, and asteroid geology, the crystals have caused a stir amongst those who believe that life could exist somewhere besides Earth.

“This is really the first time we have found abundant organic matter also associated with liquid water that is really crucial to the origin of life and the origin of complex organic compounds in space,” said the study’s lead author, Queenie Chan, a planetary scientist with The Open University in the U.K. “We’re looking at the organic ingredients that can lead to the origin of life.”

“It’s like a fly in amber,” said David Kilcoyne, a scientist from Berkeley University’s Advanced Light Source. The lab provided X-rays that were used to scan the samples’ organic components, and Kilcoyne contributed to the study as part of the international research team.

Chan noted that, even though the studies performed so far have revealed an abundance of evidence, there is still more to be done. Currently, the team that studied these crystals has plans in place to begin studying other meteorites.

“We may find more variations in organic chemistry,” she said.

Next, check out the signs of life that NASA discovered in Mexican crystal caves in. Then, take a look at these strange creatures and places that could signal the existence of alien life.