Not long after competing at the 1936 Berlin Olympics, Louis Zamperini fought for the U.S. military during World War II — and later survived two years in a Japanese POW camp. 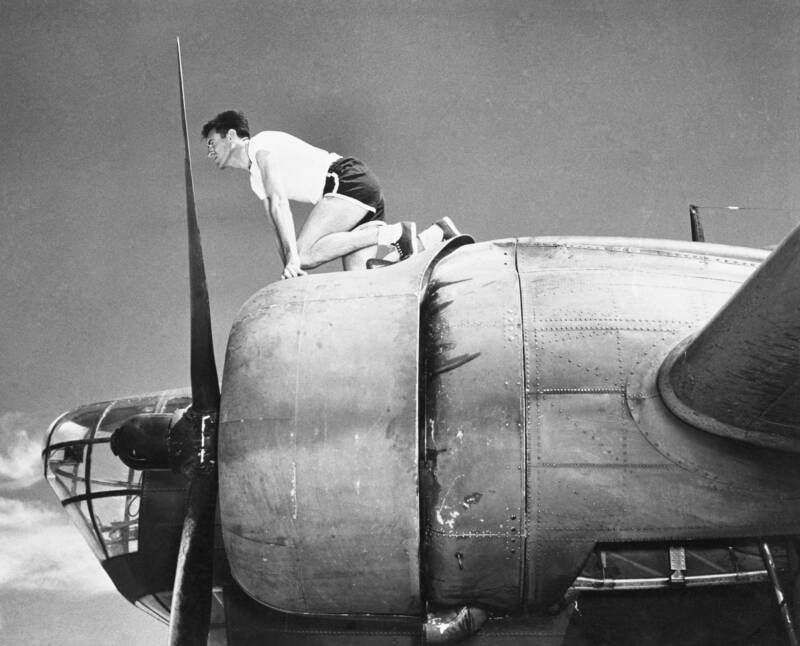 Bettmann/Getty ImagesLouis Zamperini in long-distance pose atop at B-18 bomber.

When Louis Zamperini was 21 years old, he ran at the 1936 Berlin Olympics and broke records while Adolf Hitler watched. By 26 he was an Army Air Corps bombardier, and on May 27, 1943, he crashed into the Pacific Ocean, spending 47 days adrift at sea. He survived the 1943 ordeal only to become a Japanese prisoner of war, tortured for two years.

The U.S. government had listed him as dead when Zamperini’s B-24 bomber sank into the sea. And Zamperini would only be liberated after Japan’s surrender on Sept. 2, 1945. He would then become a motivational speaker until his death at 97.

From Olympian to Purple Heart recipient, Zamperini’s life was a hero’s journey Joseph Campbell could only dream of. It made for a bestselling 2010 biography, Unbroken, which the Coen Brothers adapted into a film. Despite beating impossible odds with his integrity intact, the stoic veteran never considered himself a hero.

“Oh no,” Zamperini said. “I walk into a VA hospital and see guys in wheelchairs with their legs missing — or two legs missing or an arm missing and they’ve got one Purple Heart. Well, I’m in one piece and I’ve got three Purple Hearts. When a guy gives up part of his body, he’s the hero.”

Louis Zamperini — The Olympian Who Went To War

Born on Jan. 26, 1917, in Olean, New York, Louis Zamperini was raised by Catholic first-generation Italians. The family relocated to Torrance, California, when he was two, as dangerous omens foreshadowed incidents to come. He nearly drowned as a young boy, for instance, before nearly burning to death in a house fire. 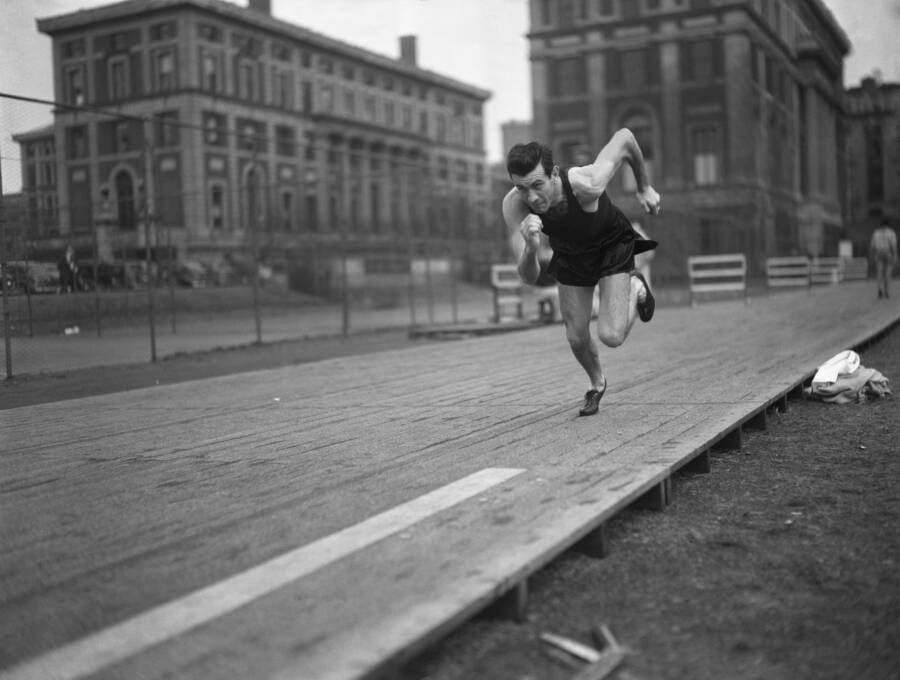 Zamperini was constantly bullied as an outsider with parents who spoke no English, and joined the track and field team when he was 15 to find refuge. He not only found success, but inspiration from figures like Glenn Cunningham — an athlete who survived near-fatal burns as a child and defied the odds to become a runner.

After Zamperini set the national high school record for the mile by running it in four minutes and 21.2 seconds in 1934, the University of Southern California awarded him a scholarship. Zamperini left for New York City and ran 5,000 meters in one of the worst heat waves and record, eager to make the 1936 Berlin Olympics.

Officially qualified, Zamperini soon found himself within feet of Adolf Hitler. He was stationed near the chancellor’s spectator box, where Zamperini thought Hitler “looked funny, like something out of a Laurel and Hardy film.” While he placed eighth in the 5,000-meter race, he ran his last lap in 56 seconds — and Hitler requested a chat. 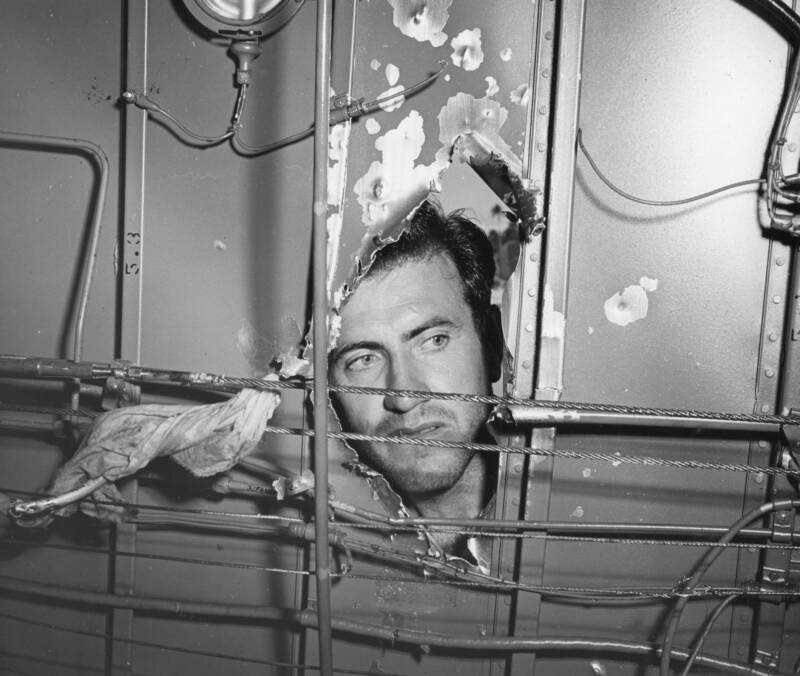 PhotoQuest/Getty ImagesZamperini inspecting damage from enemy fire on his B-24 bomber in May 1943.

“Ah, you’re the boy with the fast finish,” said Hitler.

While Zamperini had hoped to return to the Olympics in 1940, he enlisted to join the Army Air Corps’ campaign in Europe instead. With the attacks on Pearl Harbor in December 1941, he was soon in active combat — and operating a B-24 Liberator to bomb Japan in the Pacific Theater by April 1943.

Just a month later, Zamperini was tasked with finding a missing aircraft. Unfortunately, he was piloting a known semi-defective unit when the rescue mission began. Zamperini and 11 men were in the air when a malfunction sent them crashing into the sea — with only him and two other soldiers surviving the impact.

Louis Zamperini, The Prisoner Of War

Co-pilot Russell Phillips, tail gunner Francis McNamara, and Zamperini staved off hunger, heat, thirst, and sharks for weeks. Adrift on a lifeboat, they drank only rainwater and caught the odd fish. When his parents received a letter of condolences signed by President Roosevelt in June 1943, Zamperini was still alive. 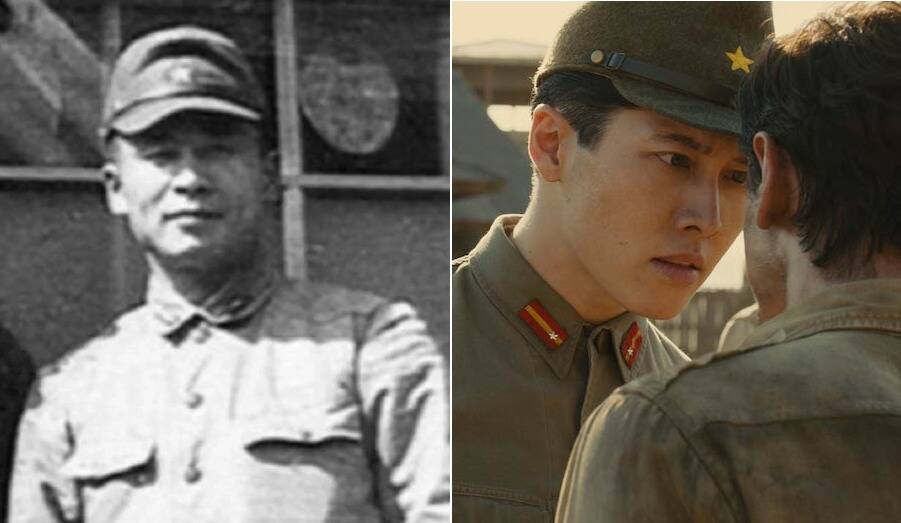 McNamara died on the 33rd day at sea, while Zamperini lost 50 pounds before washing ashore the Marshall Islands two weeks later. Zamperini and Phillips were captured by the Japanese and dragged from camp to camp — as subjects of war criminal Sergeant Mutsuhiro Watanabe. The men were beaten daily until 1945.

“I could take the beatings and the physical punishment, but it was the attempt to destroy your dignity, to make you a nonentity that was the hardest thing to bear,” Zamperini recalled.

When officials realized they had an Olympian on their hands, Zemperini’s captors starved and abused him with disturbing focus. He was purposefully separated from Phillips to bolster the psychological distress, while Watanabe regularly boiled over into horrific bouts of violence. Zamperini found strength in his athletic past: 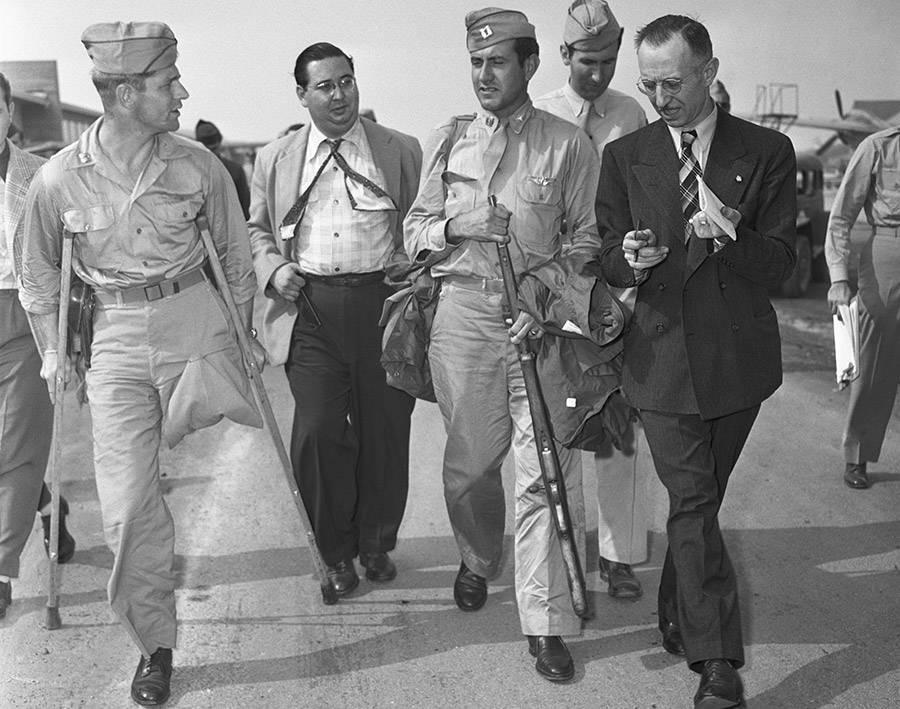 “For one thing, you have to learn self-discipline if you are going to succeed as an athlete. For another thing, you have to have confidence in yourself and believe that no matter what you’re faced with, you can deal with it — that you just can’t give up. And then there’s the aspect of staying in shape. And humor helped a lot.”

Ultimately, Zamperini was likely spared from execution by being an invaluable prisoner the Japanese believed could come in handy later. Fortunately, with the surrender of Japan, the camp was liberated in fall 1945, with the Olympian returning home to the United States — back from the dead.

The Legacy Of Louis Zamperini

For Louis Zamperini, life as a post-war torture victim was anything but easy. He turned to the bottle to self-medicate his post-traumatic stress, nearly divorcing his wife, Cynthia, in the process. Fortunately, he sobered up — and was married for 54 years before Cynthia died in 2001. 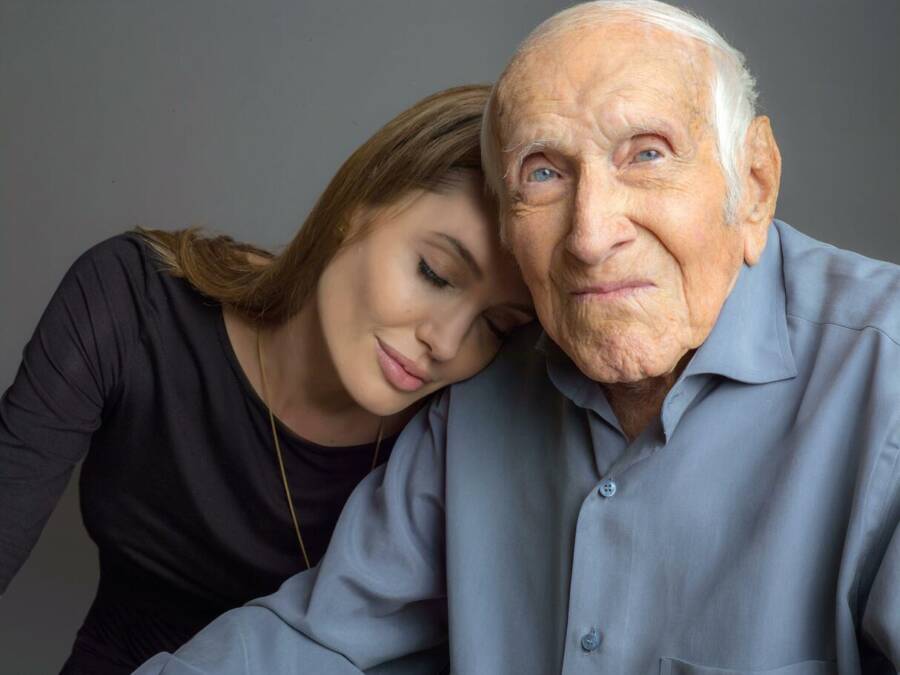 Universal PicturesLouis Zamperini and Angelina Jolie, who directed the film adaptation of his biography.

Spending his later years touring the lecture circuit to inspire people of all ages to overcome their struggles, Zamperini had decades to reflect on his life and garner new insights. It was only later, for instance, that he realized the “skinny guy” he asked take a picture of him and Hitler was Nazi propaganda minister Joseph Göbbels.

Zamperini’s high school record wasn’t beat for 20 years, while he and his wife had raised two loving children. Before he died of pneumonia on July 2, 2014, the veteran confronted his past. During a leg of the Olympic torch relay at the 1998 Winter Games in Japan, Zamperini jogged by the mountains of Naoetsu.

It was here that he had survived years of torture and daily visions of certain death, decades earlier — now returning a triumphant man, who never dared call himself a hero.

After learning about Louis Zamperini, read about Judy the Dog — the only animal to become a WW2 POW. Then, learn about Calvin Graham, the youngest decorated veteran of WW2.