The Evolution Of Madonna’s Feminist Message

Women of a certain age will remember the wannabes; they might even have been one. The surf slang was popularized in the mainstream to describe the packs of peroxide blonde high school girls in thrift shop attire—vented t-shirts, denim jackets, rubber bracelets all accessorized with lace, especially the fingerless gloves—who roamed American malls in the mid-1980s.

Costumed in crucifixes and layers of lace, Madonna bounced onto the world stage in 1983 inviting us to take a Holiday, and by the end of 1985 she had become a phenom due to her sophomore album, “Like a Virgin.”

The appeal to high school girls was apparent; Madonna captured the imaginations of the wannabes, and once she held them and other record buyers in the palm of her hand, she crafted messages of empowerment. One might trace it back to “Material Girl.” In her Marilyn Monroe caricature, Madonna uses her old-fashioned feminine wiles to get what she wants, materialistically.

It’s not the strongest feminist message, but it would open the door to more pointed ones as her career progressed and the wannabes aged with her. Already a controversial figure, particularly for her uninhibited sexuality, Madonna in 1986 released “True Blue,” generally credited for making Madonna a superstar and certifying her position as one of the consummate musical figures of the 1980s.

Again, she included a track on the album that appealed to teenage girls. Long before “16 and Pregnant” aired on MTV, Madonna’s videos played on the channel, including “Papa Don’t Preach” about a pregnant teenager who has made up her own mind to keep her baby.

“At the time being a teen mom was still a dirty secret, something to be ashamed of, and a horrible tragedy to befall a family,” writes a Jezebel blogger. “ And yet teen pregnancy was frequent. The issue was huge.” 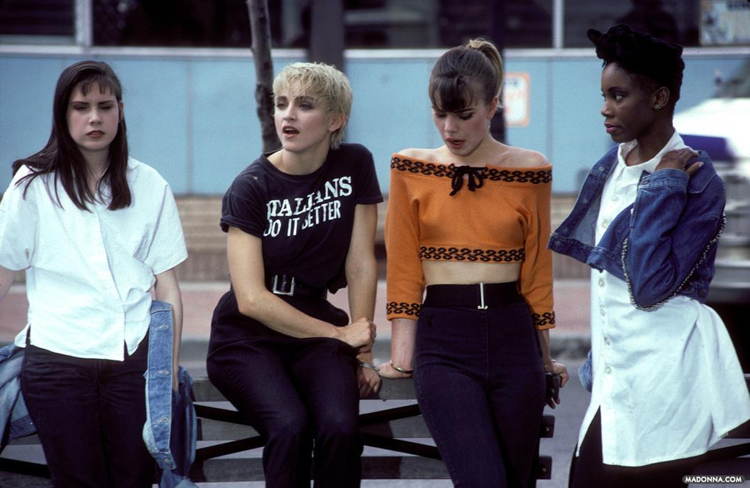 While climbing celebrity ranks and prepping for her next role in Pepsi’s famous concert commercials, Madonna again stirred up controversy. This time, the issue wasn’t so much with lyrics, but images. In “Like a Prayer,” Madonna takes on racism, appearing in a flimsy black slip and kissing an African-American religious icon, and later stands among crosses engulfed in flames.

It was too much for the American soda purveyors. Pepsi dropped Madonna, but the song became one of her biggest hits. Nearly a quarter of a century later, Madonna had the last laugh, wrapping up her Super Bowl halftime show with “Prayer” in 2012.

Madonna continued to push the sexual envelope and encouraged women to embrace their sexuality, and perhaps more importantly, openly express it. In terms of iconography, Madge’s boldest feminist statement drove her “Blond Ambition” tour, where she strutted in finely tailored Jean Paul Gaultier suits with slits that exposed her cone bra.