Scientists Have Detected A Lake Of Water On Mars. Is Alien Life Next?

Scientists spent two years ruling out all other possible explanations. 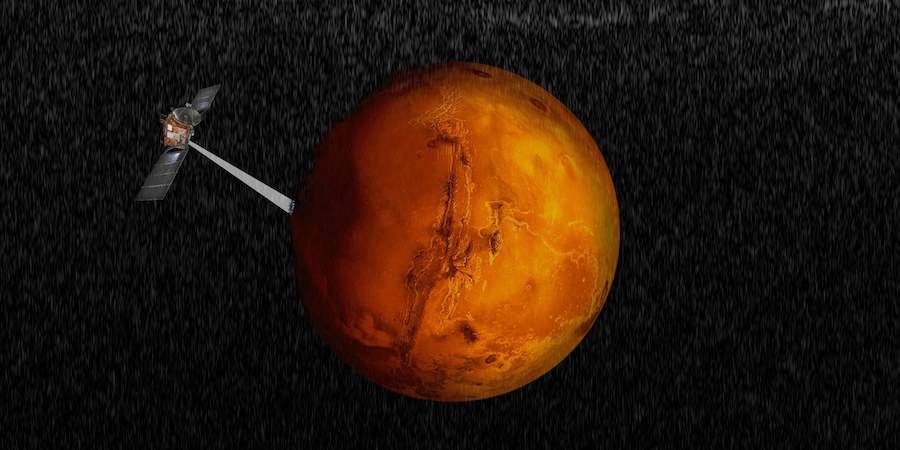 DAVIDE COERO BORGA/ WiredSigns of a buried lake were detected on the planet’s south pole.

Scientists have been on a mission for decades. Despite Mars’ desolate surface, the quest to find water on the Red Planet has been ongoing, with many scientists agreeing that it likely exists in some areas.

But new evidence published in the journal Science may be one of the biggest indicators to date that there is water on Mars.

Led by Roberto Orosei, a radio astronomer at the National Institute for Astrophysics, a team of researchers detected signs of a large body of water underneath an ice cap on the planet’s south pole using a spacecraft called the Mars Express, which has been orbiting Mars since 2003. The Mars Advanced Radar for Subsurface and Ionosphere Sounding (MARSIS) is an instrument on the spacecraft that penetrates the planet’s surface and sends radar pulses back up to the spacecraft.

About a mile below the surface, MARSIS detected a 12.4-mile wide structure that’s radar signature matched buried liquid water beneath ice sheets on earth, particularly in Antarctica and Greenland.

This discovery is the first one to indicate that water exists underneath the surface.

The finding is significant because of what it could mean for possible alien life. Bacteria have been found in water under glaciers in Antarctica and Greenland.

“Pretty much anywhere there is liquid water on Earth, you find something that’s managed to survive in it,” Tanya Harrison, a planetary scientist and director of research for Arizona State University’s Space Technology and Science Initiative told The Verge.

The researchers mapped out the area of the potential reservoir based on 29 sets of radar samplings. Orosei and his team collected the data from 2012 to 2015. They then spent the next two years ruling out other alternatives.

One example they discussed was that a layer of frozen carbon dioxide around the ice cap could produce the observed radar samplings. But this and all other explanations seemed less likely than the presence of water.

The structure is far enough underground that it wouldn’t be affected by Mars’ seasonal changes. Additionally, the researchers suggest that the polar ice on top of the water creates intense pressure, making it easier to stay in a liquid state. (Increased pressure prevents water from freezing at lower temps.)

Although the temperature is expected to be below the freezing point of water, the team noted that dissolved magnesium, calcium, and sodium are known to be present in Martian rocks. These elements strongly suppress the freezing point of water and, based on the knowledge that they already exist in the rocks, they likely could exist in a dissolved state in the water, forming a brine.

Since the finding is based solely on radar measurements, more sophisticated instruments or actually drilling into the ice would be needed to truly confirm it.

We could get more answers soon thanks to NASA’s recently launched lander, InSight. InSight is designed to figure out Mars’ internal temperature by probing Mars’ interior.

InSight has the capacity to tell how much heat is escaping the planet, and consequently whether liquid water is sustainable underneath the South Pole.

So the biggest questions now are whether the discovery definitively is water, and if so, could there be more.

Next, read more on everything you’ve wanted to know about Mars. Then read about the discovery of the planet nine.