The Red Planet has mystified astronomers for millennia. After you read about the Mars landscape, it's pretty easy to see why. 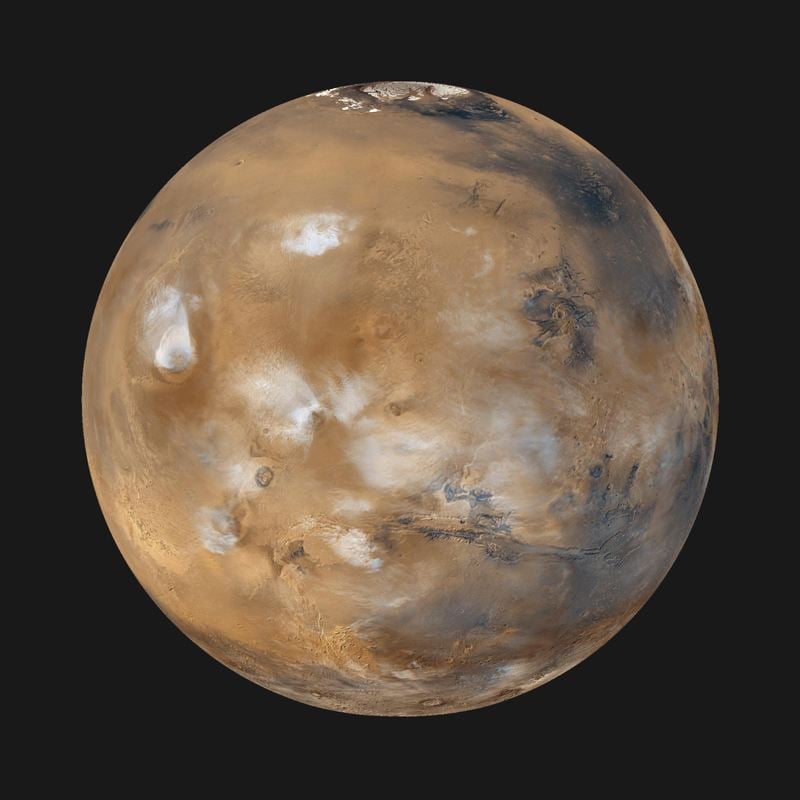 More than any other planet beyond Earth, more than any other heavenly body discovered since the rapid expansion of telescopes, Mars has made a multi-millennia-long career out of taunting humanity. Named for the Roman god of war, Mars is usually visible to the naked eye as a red, flickering pinhole in the night sky. But with only a beginner’s telescope, the many contours and colors of the Martian landscape become clear, and a bizarre and intriguing world lays waiting to be discovered. 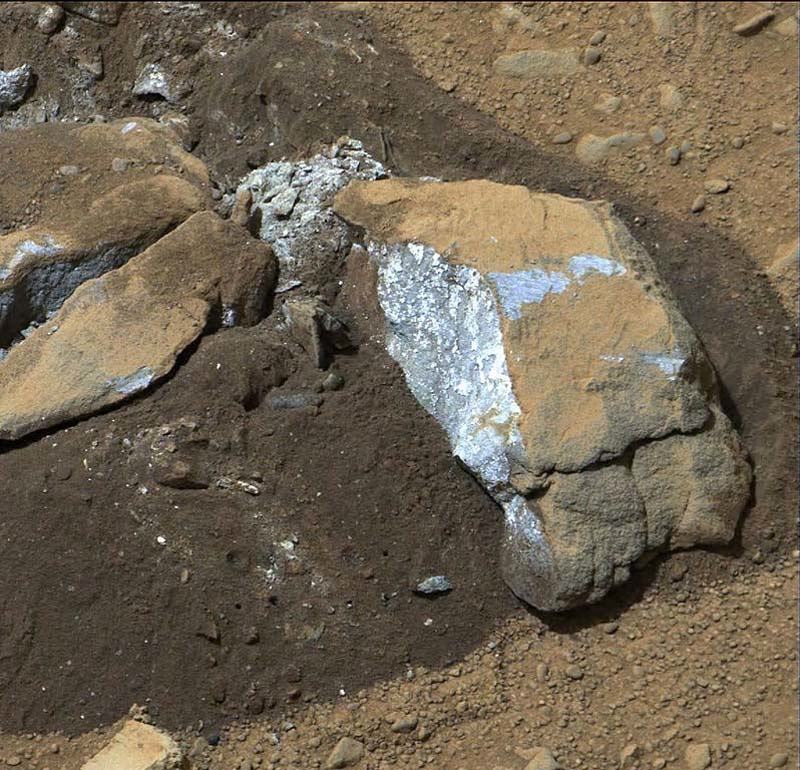 Mars is often called the red planet due to its blood-red appearance to the naked eye. But one look through the telescope shows that in fact Mars is rusty orange-brown, streaked with long, jagged black lines and capped on both ends with swirls of pure white. Mars is literally rusted over with iron oxide, but recent meddling by Mars probes has uncovered interiors of a much brighter and more colorful nature. 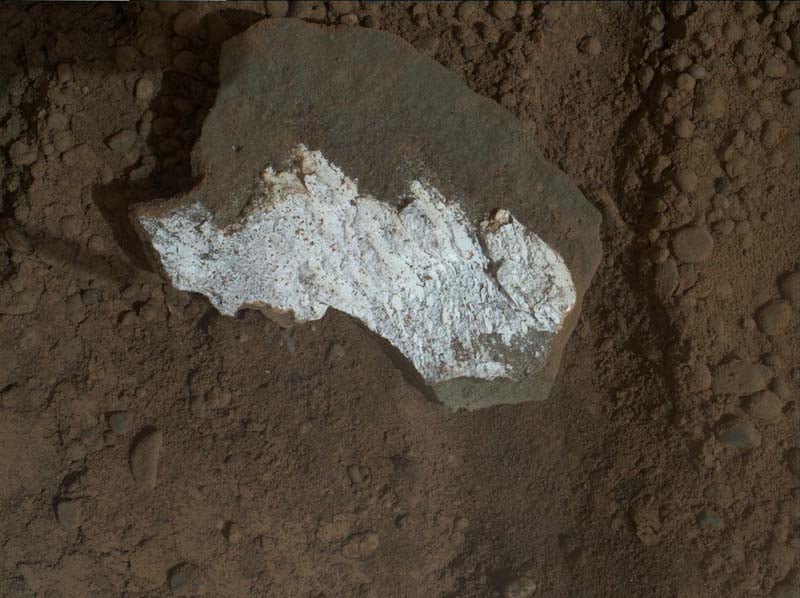 Mars naturally reveals its dark soil as an endless swarm of dust devils scribbles all over the face of the planet, creating aimless, almost smoky trails. A close look reveals spirograph swirls in the paths of the dust devils. After their activity dies down, the wind sweeps new dunes into the rust and soil, making the darkness of the swirls appear uniform with the top layer of orange rust. 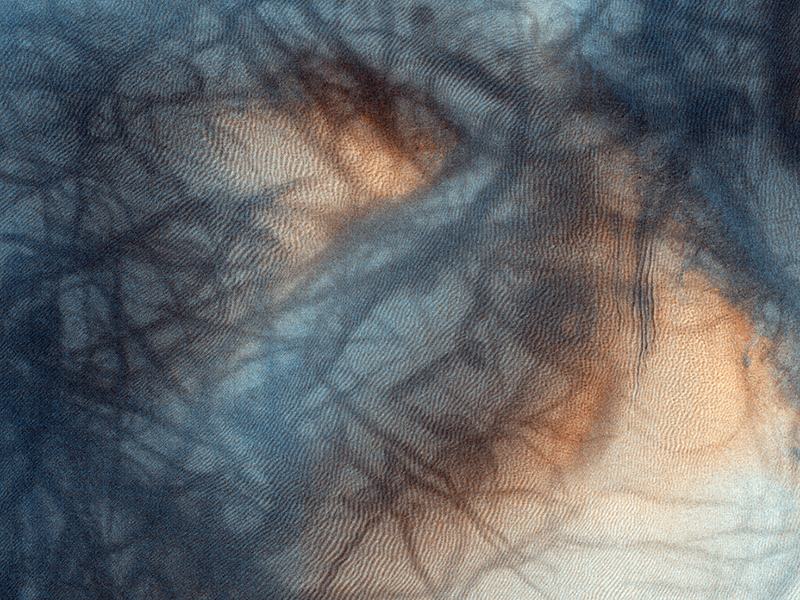 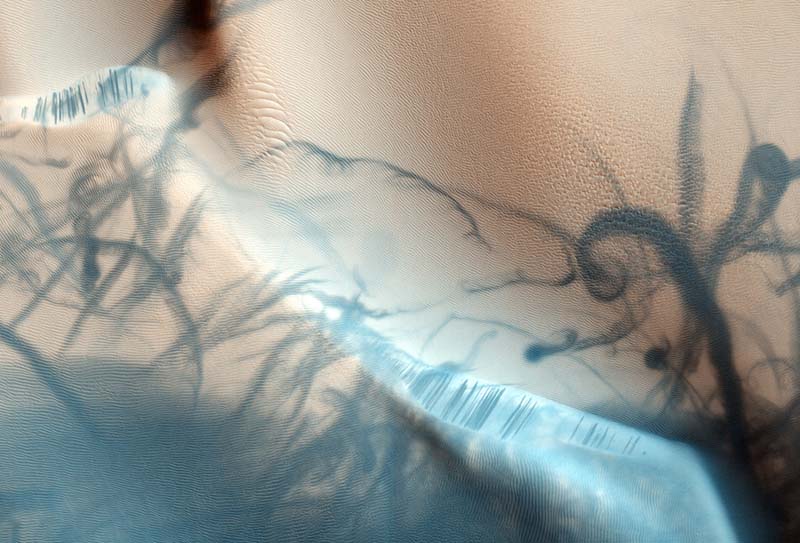 The Abalos Undae dune field’s cobalt color is due to its basaltic composition, while the areas with red and white are probably collections of dust. Located in the icy lands before the northern ice cap, it is believed that the dunes were formed partially by melting ice. Though uncertain, it would appear that the dunes are frozen in place, with only the loose sands on top migrating with the wind. 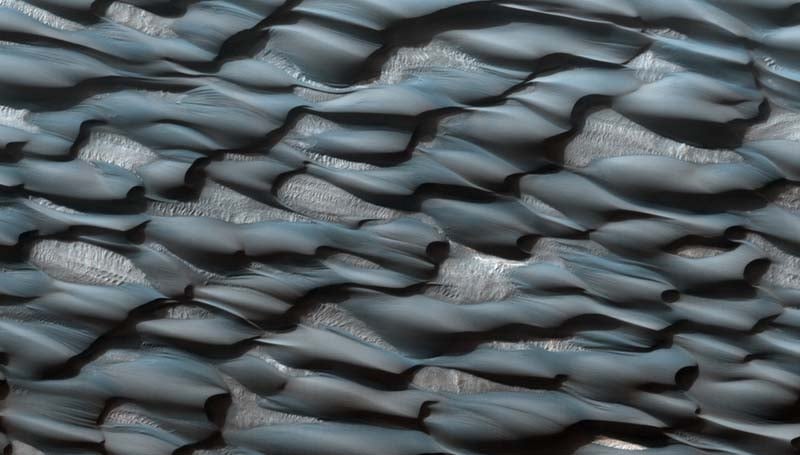 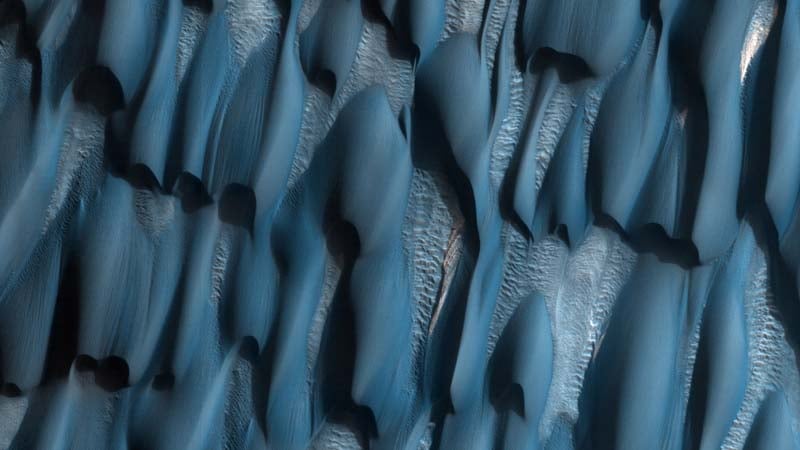 The internet was abuzz a few years back when NASA published photos of Mars dunes containing what appeared to be trees. Alas, no such flora was to be found. In fact, the dark lines in the photos are not reaching upwards but streaming downwards. The spindly streaks that resemble tree trunks are actually sand that has been trapped in winter ice, dislodged as dry ice evaporates under the first spring sunlight. 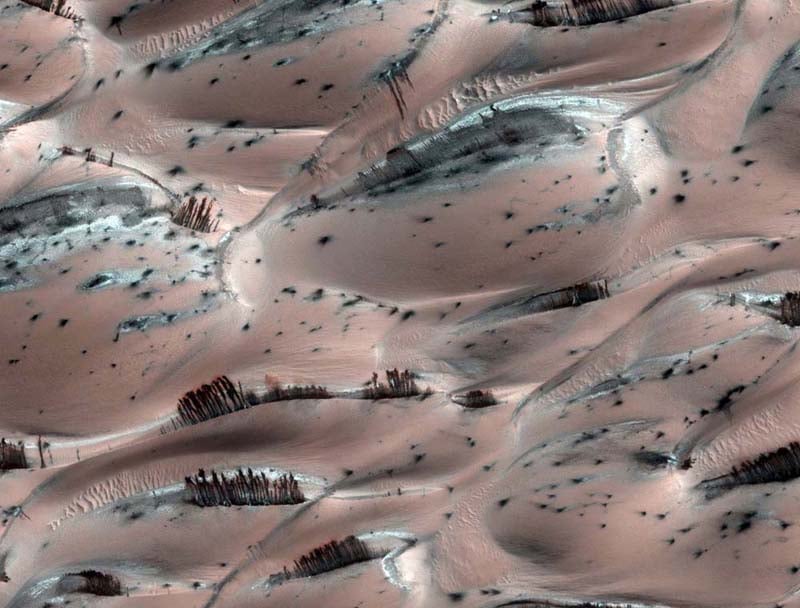 The ice caps also quickly evaporate come Spring, comprising a mixture of water and dry ice. The image above is the north cap, which consists of mostly water during the Martian summer. The south cap, pictured below in winter, has a thin, eight-meter layer of permanent dry ice. 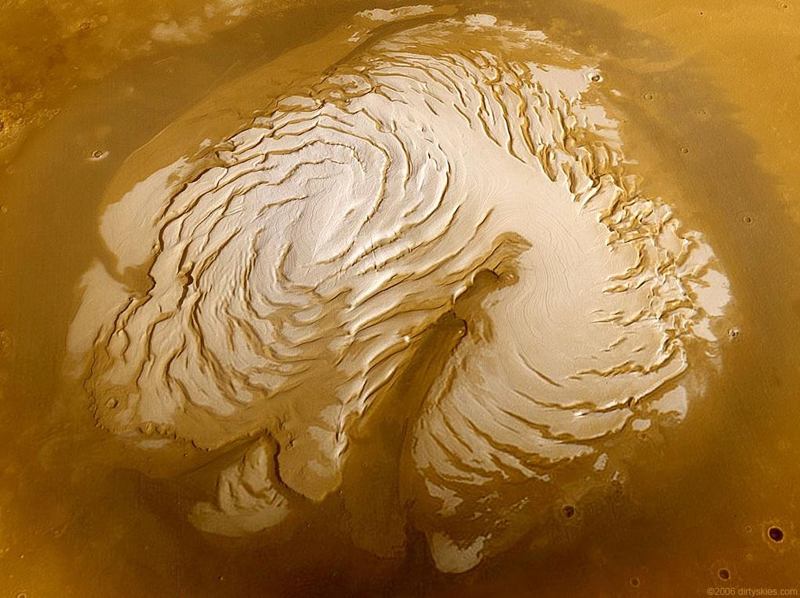 The sudden change in temperature causes avalanches all along the receding cap. This photo was the first extraterrestrial avalanche ever caught on camera. 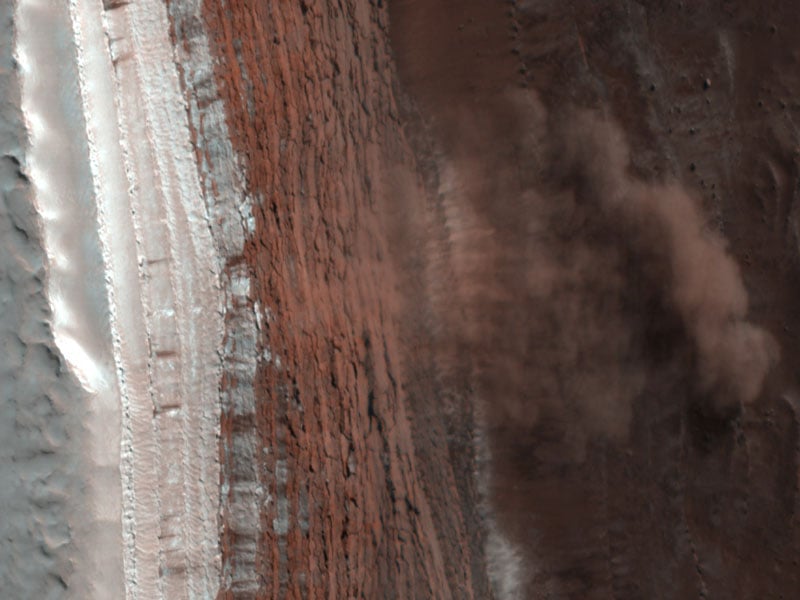 Though Mars is the third largest of the four terrestrial planets by volume, it houses the largest peak in the solar system by a wide margin. Olympus Mons has an area nearly as large as Germany, and reaches 21.9km into the Martian sky, 4.6km higher than any other recorded peak. Olympus Mons is still believed to be active, along with the other nearby Tharsis Montes volcanoes, a trio of shield volcanoes each two to three orders of magnitude larger than any found on Earth. 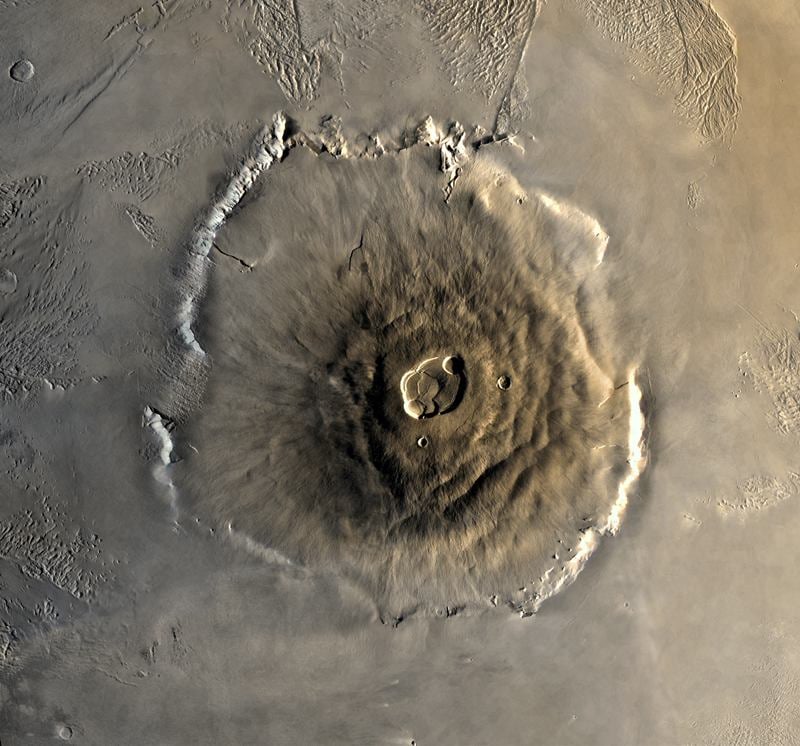 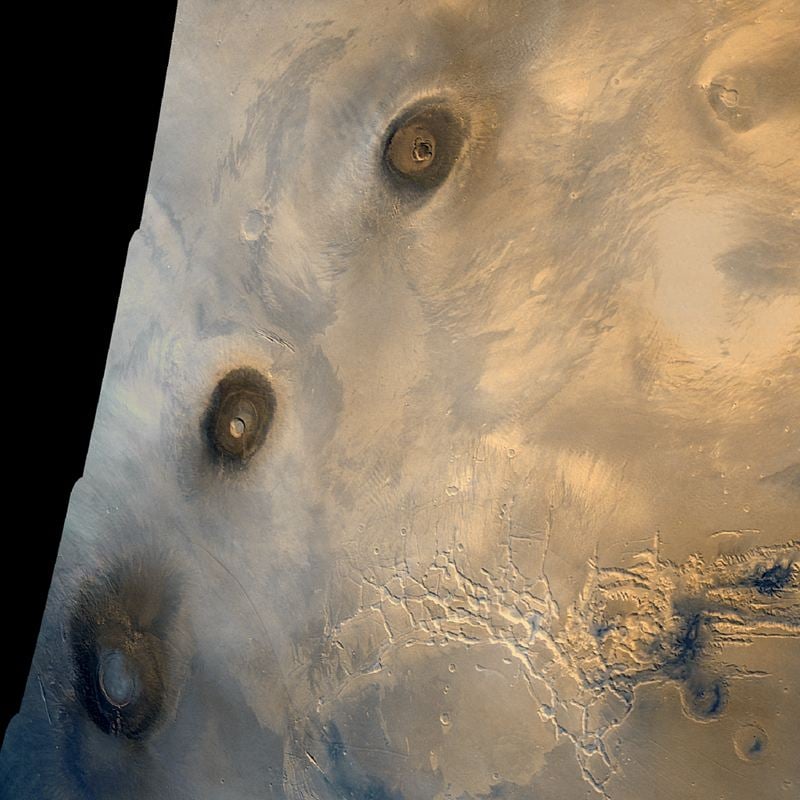 One of the most prominent features on the whole planet, a series of canyons known as Valles Marineris, stretches an incredible one-fifth of the way around Mars. The valleys extend as deep as seven kilometers into the planet, and are believed to have formed from tectonic and volcanic activity in the nearby Tharsis region.

Mars is so rich in texture that it even gives the appearance of the existence of complex life. This phenomenon is called pareidolia, or the brain’s tendency to find faces and familiar forms in patterns and shapes. The objects seen range from the adorably familiar… 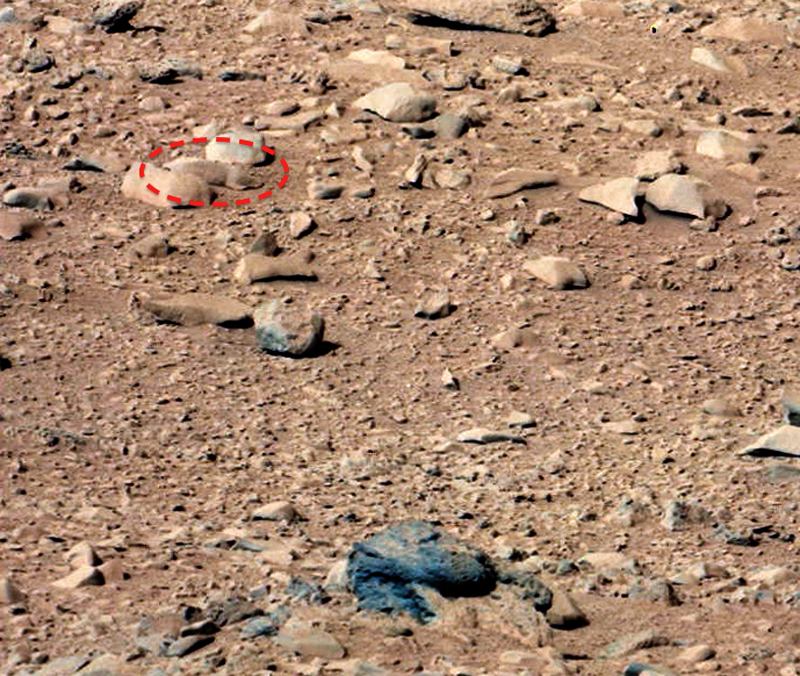 to the insistently conjectured… 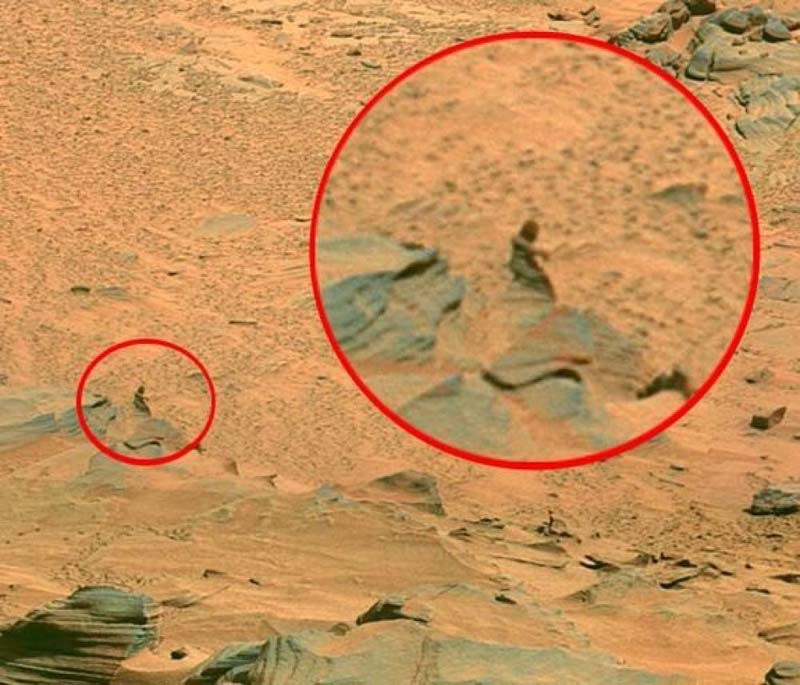 to the hauntingly creepy… 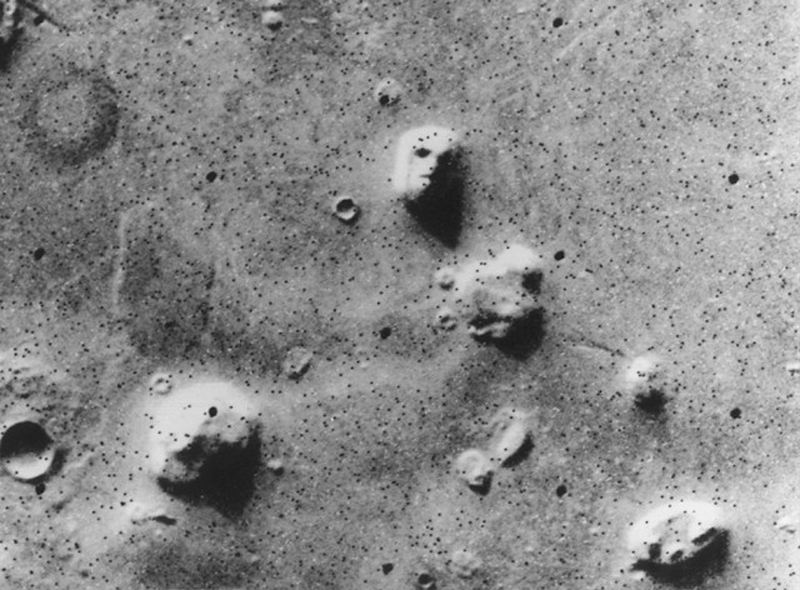 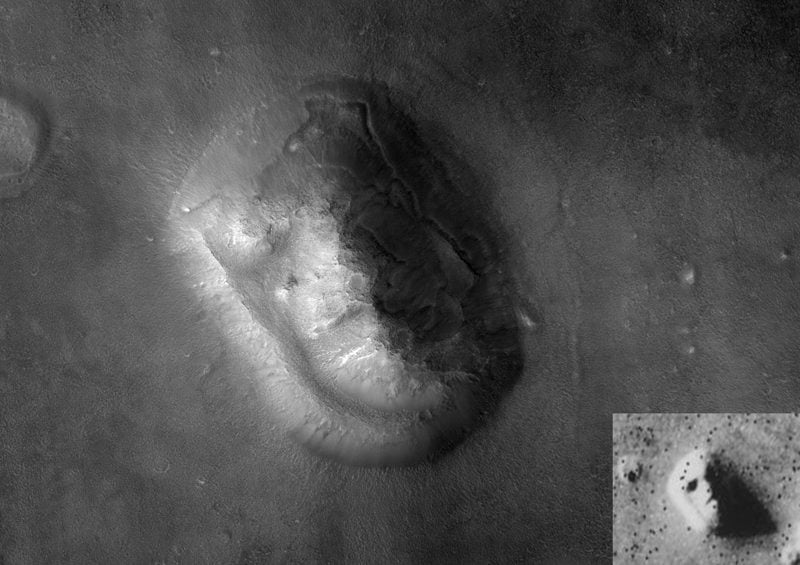 But as cameras get sharper and return higher-definition photos, it becomes clear that sometimes we only see what we want to see.

That said, there are still plenty of mysteries left on the Red Planet. The picture below of a face of the Acheron Fossae shows thick, black streaks that are believed to be avalanches of very fine sand. 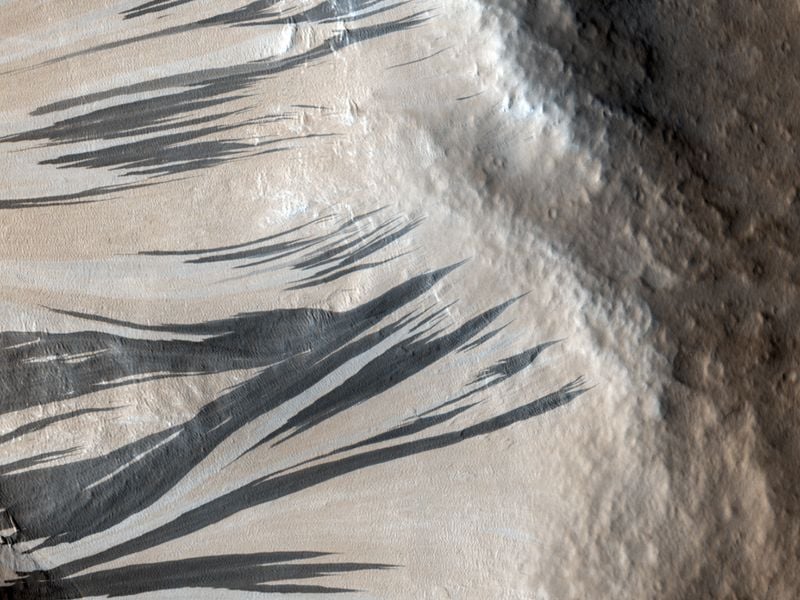 Even stranger is the unofficially named Inca City, located on the south pole. The geometric shapes remain a total mystery to astronomers. 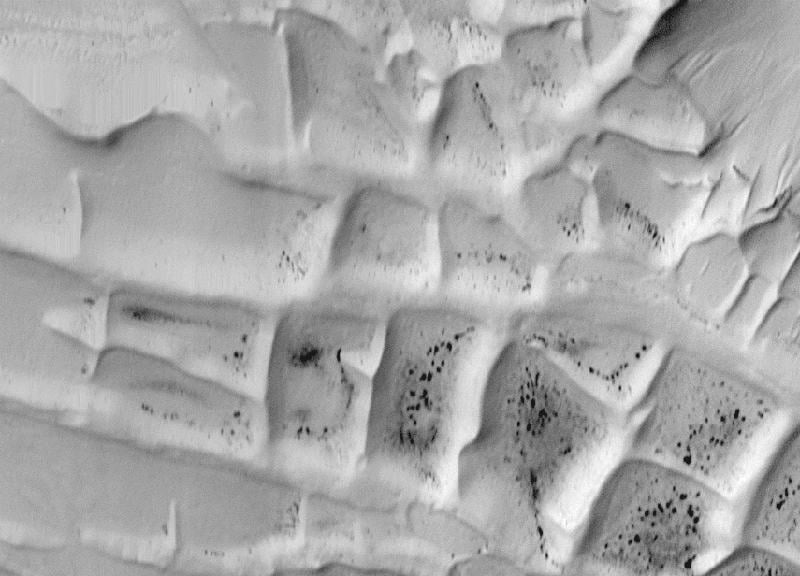 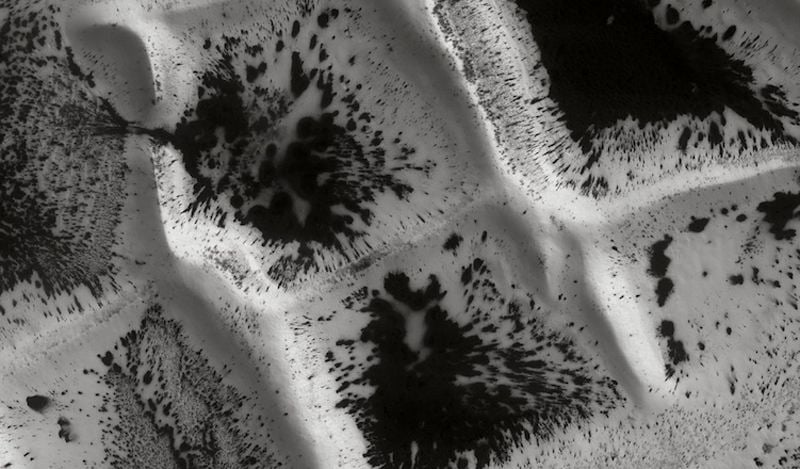 The layered sedimentary rocks of the Meridiani Planum are contained within an impact crater. It is believed deposits of dust and sand were blown into the crater and lodged into the crevices, presmably eroded by wind and water, giving the plains the stair-step appearance. 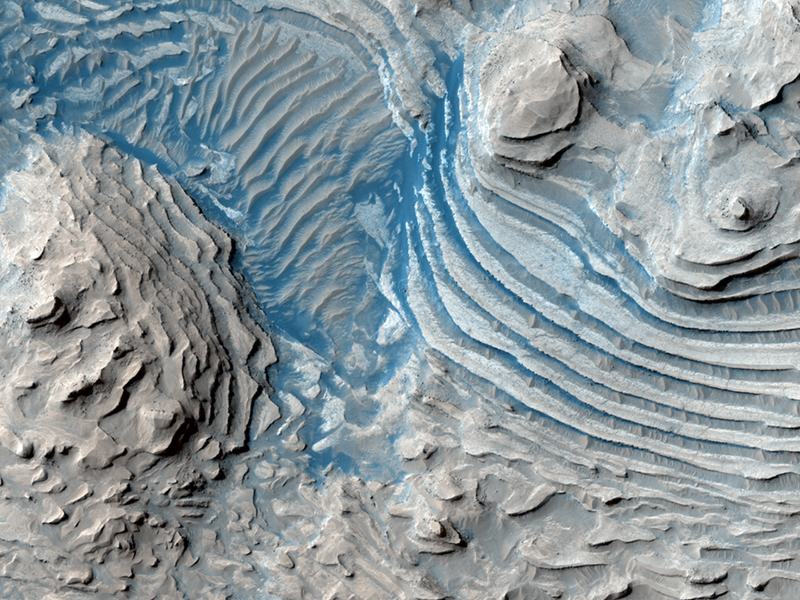 Though there may not be any life on Mars or even any evidence of its past existence, Mars will forever remain a favorite object of night watchers through each passing generation. 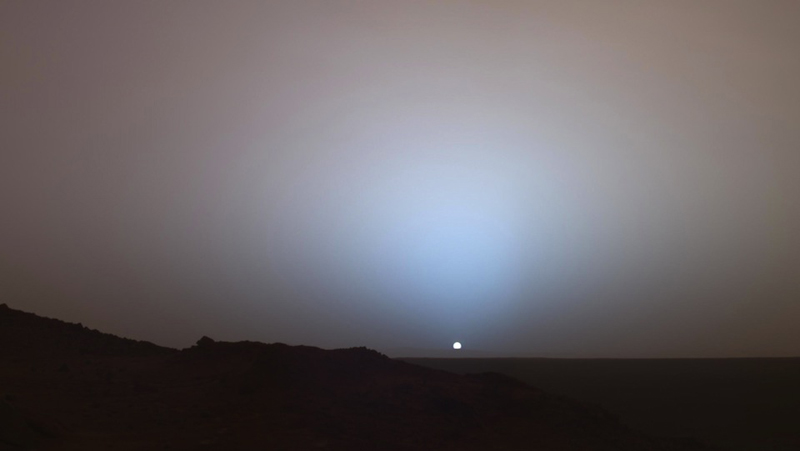