How Did Marvin Gaye Die? Inside The Motown Legend’s Murder

After inflicting decades of torment and abuse, Marvin Gay Sr. shot his son Marvin Gaye at point-blank range inside the family's Los Angeles home on April 1, 1984.

As music critic Michael Eric Dyson once said, Motown legend Marvin Gaye “chased away the demons of millions… with his heavenly sound and divine art.” But while this soulful voice healed those who listened, the man behind it suffered a tremendous amount of pain.

That pain largely centered on Gaye’s relationship with his father, Marvin Gay Sr., an abusive man who never wanted his son and made no secret of it. A violent alcoholic, Gay took out his anger on his children — especially Marvin.

But not only did Marvin Gaye endure this abusive childhood, he eventually found worldwide fame as a soul singer for the iconic Motown Records in the 1960s and ’70s. But by the 1980s, Gaye moved back in with his parents in Los Angeles following a losing battle with cocaine addiction as well as financial difficulties. 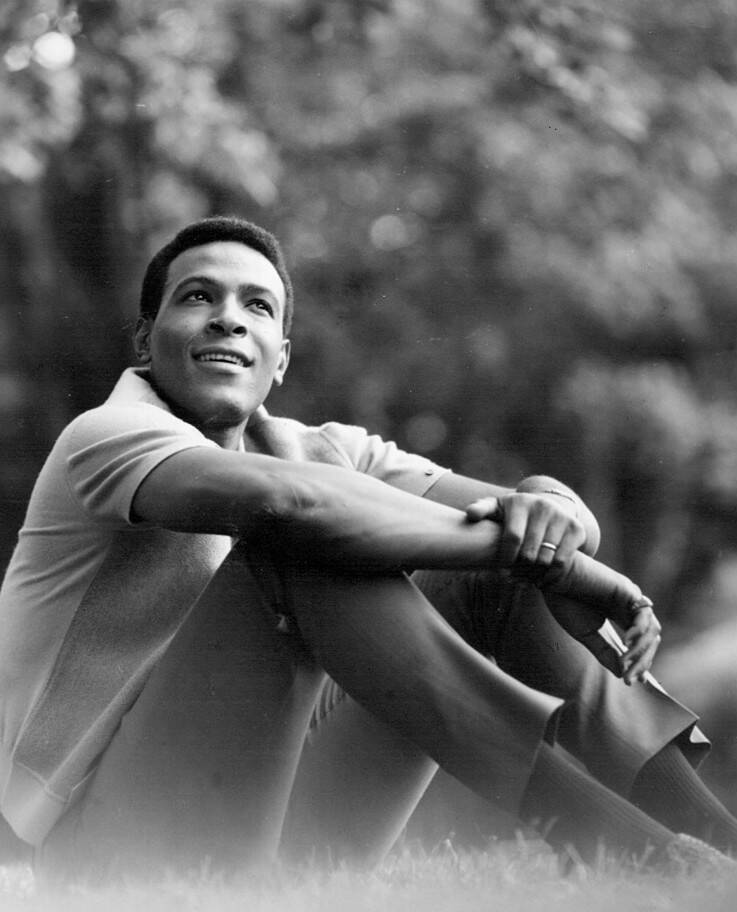 Wikimedia Commons“He wanted everything to be beautiful,” a friend once said of Gaye. “I think his only real happiness was in his music.”

It was there, in the family’s Los Angeles home, that the tension between Gaye and his father reached its tragic climax when Marvin Gay Sr. fatally shot his son three times in the chest on April 1, 1984.

But as the Prince Of Motown’s brother, Frankie, later said in his memoir Marvin Gaye: My Brother, Marvin Gaye’s death seemed written in stone from the beginning.

Inside The Abusive Household Of Marvin Gay Sr.

Marvin Pentz Gay Jr. (he changed the spelling of his surname later on) was born on April 2, 1939, in Washington, D.C. From the start, there was violence inside the home thanks to his father and violence outside the home due to the rough neighborhood and public housing project in which they lived.

Gaye described living in his father’s house as “living with a king, a very peculiar, changeable, cruel, and all-powerful king.”

That king, Marvin Gay Sr., hailed from Jessamine County, Kentucky, where he was born to an abusive father of his own in 1914. By the time he had a family himself, Gay was a minister in a strict Pentecostal sect who disciplined his children severely, with Marvin reportedly getting the worst of it.

Marvin Gaye performing ‘I Heard It Through The Grapevine’ in 1980.

While under his father’s roof, the young Gaye suffered vicious abuse from his father nearly every day. His sister Jeanne later recalled that Gaye’s childhood “consisted of a series of brutal whippings.”

And as Gaye himself later said, “By the time I was twelve, there wasn’t an inch on my body that hadn’t been bruised and beaten by him.”

This abuse prompted him to turn to music rather quickly as an escape. He also later said that were it not for his mother’s encouragement and care, he would have killed himself.

The abuse that caused these suicidal thoughts may have been partly fueled by Marvin Gay Sr.’s complicated emotions about his own rumored homosexuality. Whether or not that’s true, the source of the rumors was largely that he cross-dressed, a behavior that was — often erroneously — linked with homosexuality, especially in decades past.

According to Marvin Gaye, his father often wore women’s clothes, and “there have been periods when [my father’s] hair was very long and curled under, and when he seemed quite adamant in showing the world the girlish side of himself.”

But whatever its cause, the abuse didn’t stop Gaye from also developing an extraordinary talent for music. He went from performing at his father’s church at age four to mastering both the piano and drums by the time he was a teen. He developed a deep love for R&B and doo-wop.

As he started to make a name for himself professionally, Gaye wanted to distance himself from his toxic relationship with his father so he changed his name from “Gay” to “Gaye.” Gaye reportedly also changed his name in order to quell rumors that he and his father were both homosexuals.

Gaye eventually moved with a musical colleague of his to Detroit and was able to secure a performance for the biggest name on that city’s music scene, Motown Records founder Berry Gordy. He was quickly signed to the label and soon married Gordy’s older sister Anna.

Though Gaye soon became the Prince of Motown and enjoyed monumental success for the next 15 years, his relationship with his father never truly healed.

By the time Marvin Gaye finished what would be his last tour in 1983, he had developed a cocaine addiction to cope with the pressures of the road as well as his failed marriage to Anna due to his infidelity and which resulted in a contentious legal battle. Addiction had made him paranoid and financially unstable, inspiring him to return home. When he learned that his mother was recovering from kidney surgery, that only gave him more reason to move into the family home in Los Angeles.

Back home, he found himself in a pattern of violent fights with his father. Even after decades, the old problems between the two were still raging.

“My husband never wanted Marvin, and he never liked him,” Alberta Gay, Marvin Gaye’s mother, later explained. “He used to say he didn’t think he was really his child. I told him that was nonsense. He knew Marvin was his. But for some reason, he didn’t love Marvin, and what’s worse, he didn’t want me to love Marvin either.”

Furthermore, even as a grown man, Gaye harbored troubled emotions related to his father’s cross-dressing and rumored homosexuality.

According to one biographer, Gaye had long feared that his father’s sexuality would influence his, saying:

“I find the situation all the more difficult because… I have the same fascination with women’s clothes. In my case, that has nothing to do with any attraction for men. Sexually, men don’t interest me. It’s also something I fear.” 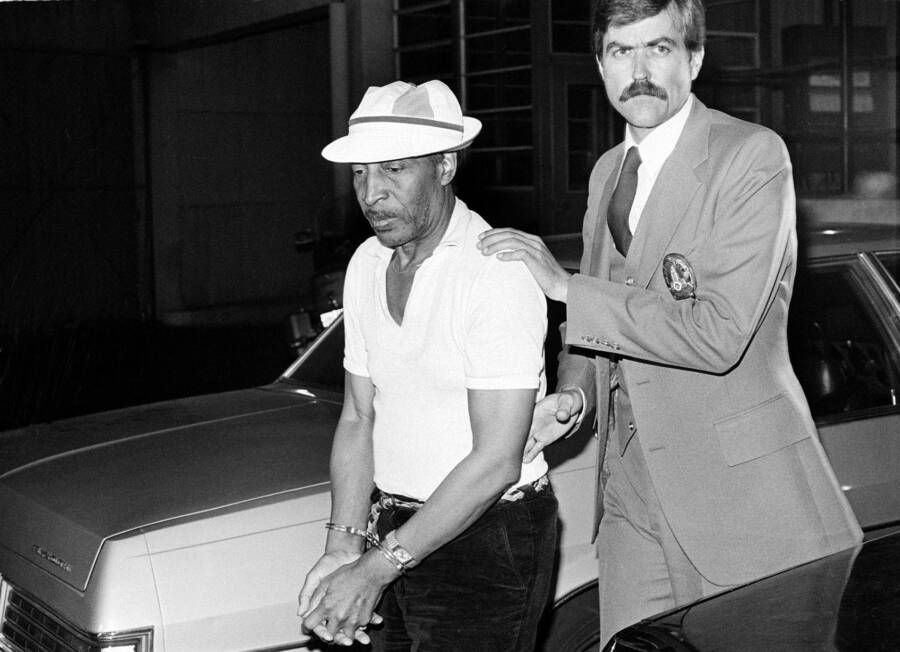 Lennox McLendon/Associated PressMarvin Gay Sr. said he wasn’t aware his son had died until a detective told him hours later.

Whether it was these fears, Marvin Gaye’s drug addiction, Marvin Gay Sr.’s alcoholism, or a myriad of other causes, Gaye’s time back home quickly proved to be violent. Gay eventually kicked Gaye out, but the latter returned, saying, “I have just one father. I want to make peace with him.”

He’d never get the chance.

How Marvin Gaye Died At The Hands Of His Father 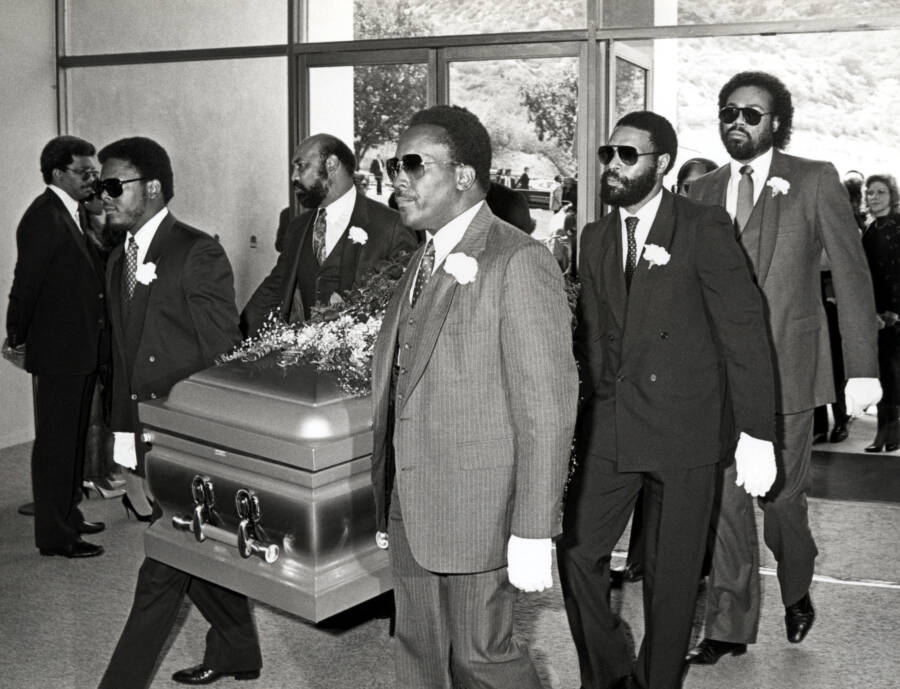 Ron Galella/Ron Galella Collection/Getty ImagesThe “Prince of Motown” was buried three days after his 45th birthday. Fans were devastated when they learned how Marvin Gaye had died.

The death of Marvin Gaye started with a fight like so many others. On April 1, 1984, Marvin Gaye and Marvin Gay Sr. became engaged in a physical altercation after another one of their verbal battles in their Los Angeles home.

Then, Gaye allegedly began beating his father until his mother, Alberta, separated them. While Gaye was talking with his mother in his bedroom and trying to calm down, his father reached for a gift that his son had once given him: a .38 Special.

Marvin Gay Sr. entered the bedroom and, without a word, shot his son once in the chest. That one shot was enough to kill Gaye, but after he fell to the ground, his father approached him and shot him a second and third time at point-blank range. 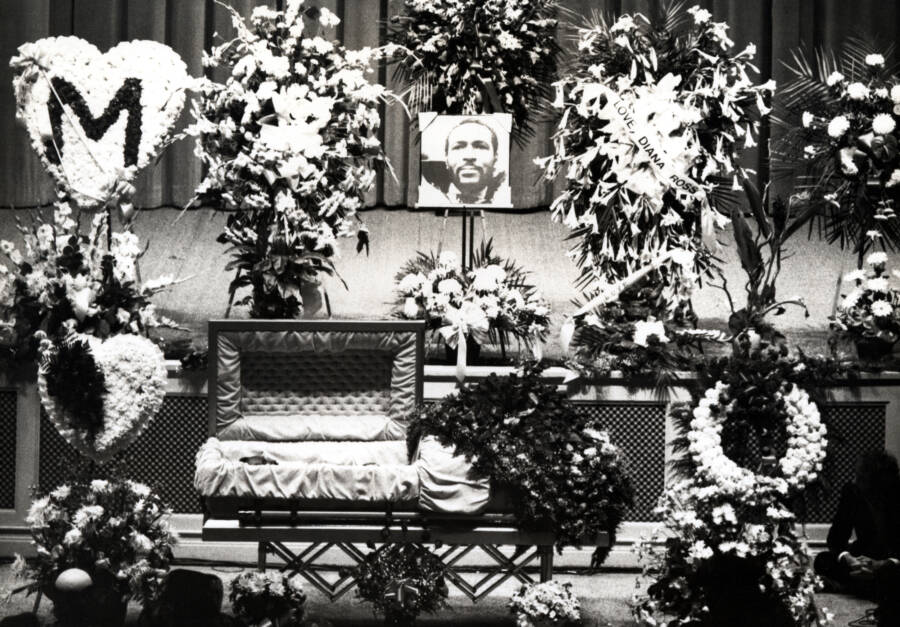 Alberta fled in horror and her younger son Frankie, who lived in a guest house on the property with his wife, was the first one to enter the scene just after Marvin Gaye’s death. Frankie later recalled how his mother collapsed before them, crying, “he’s shot Marvin. He’s killed my boy.”

Marin Gaye was pronounced dead at age 44 at 1:01 PM. When police arrived, Marvin Gay Sr. was sitting calmly on the porch, gun in hand. When police asked him if he loved his son, Gay replied, “Let’s say I didn’t dislike him.”

Why Did Marvin Gaye’s Father Shoot Him? 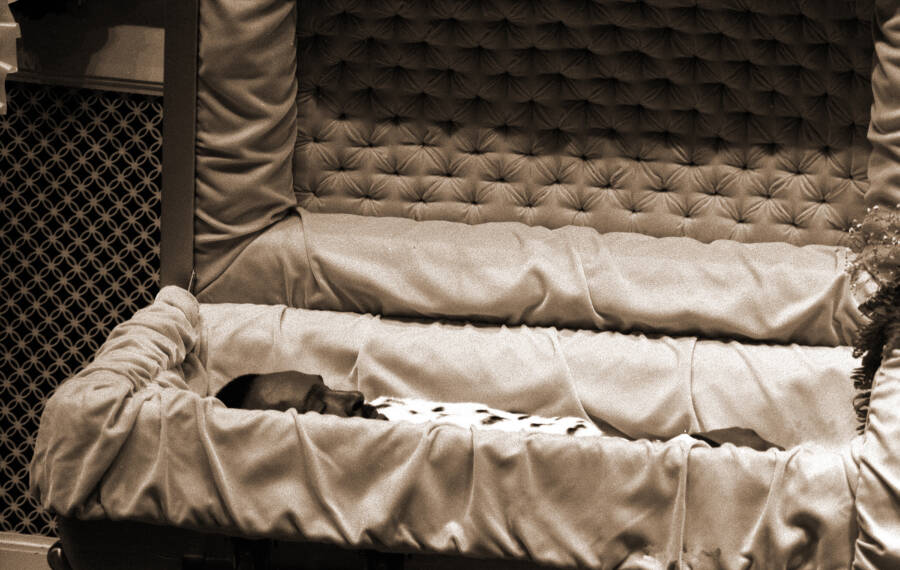 Kypros/Getty ImagesAfter the funeral, which included a performance from Stevie Wonder, Marvin Gaye was cremated and his ashes were scattered near the Pacific Ocean.

While Marvin Gay Sr. was never shy about his venom toward his son, his attitude somewhat changed following Marvin Gaye’s death. He made statements professing his grief over losing his beloved child and claimed that he wasn’t fully aware of what he was doing.

In a jail cell interview before his trial, Gay admitted that “I pulled the trigger,” but claimed that he thought the gun was loaded with BB pellets.

“The first one didn’t seem to bother him. He put his hand up to his face like he’d been hit with a BB. And then I fired again.”

Furthermore, in his defense, Gay claimed that his son had become “something like a beastlike person” on cocaine and that the singer beat him terribly before the shooting occurred.

The subsequent investigation, however, found no physical evidence that Gay Sr. suffered a beating. Lieutenant Robert Martin, the lead detective on the case, said, “There was no indication of bruises… nothing like he’d been punched out or that kind of stuff.”

As for the nature of the argument that preceded Marvin Gaye’s death, distraught neighbors claimed at the time that the fight was over plans for the singer’s 45th birthday, which was the next day. Later reports claimed that the fight had broken out over an insurance policy letter that Alberta had misplaced, drawing Gay’s wrath.

Whatever the cause and whatever the truth of Gay’s BB claims, he added that he was remorseful and that he didn’t even know his son had died until a detective told him hours later.

“I just didn’t believe it,” he said. “I thought he was kidding me. I said, ‘Oh, God of mercy. Oh. Oh. Oh.’ It just shocked me. I just went to pieces, just cold. I just sit there and I didn’t know what to do, just sitting there like a mummy.”

Ultimately, the courts seemed to have some sympathy for Marvin Gay Sr.’s version of events, despite the brutal way that Marvin Gaye had died. 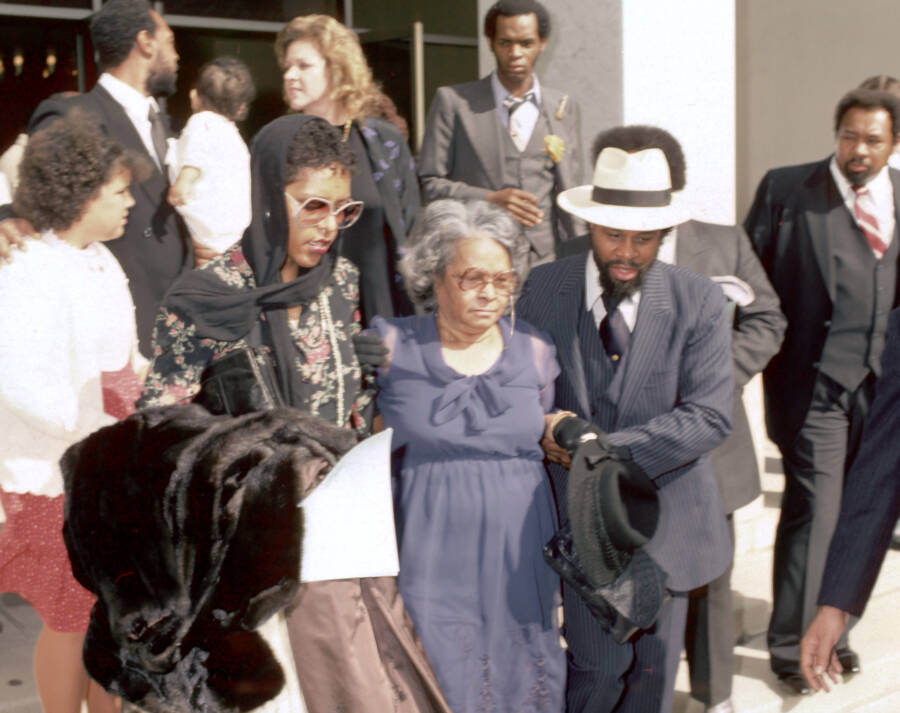 On September 20, 1984, Gay was allowed to enter a plea bargain of no contest to one charge of voluntary manslaughter. He was given a suspended six-year sentence with five years of probation. He later died in a California nursing home in 1998 at age 84.

He gave his last words on the death of Marvin Gaye at his sentencing on November 20, 1984:

“If I could bring him back, I would. I was afraid of him. I thought I was going to get hurt. I didn’t know what was going to happen. I’m really sorry for everything that happened. I loved him. I wish he could step through this door right now. I’m paying the price now.”

But whether Marvin Gay Sr. was indeed truly penitent or the death Of Marvin Gaye was a cold, conscious act, the beloved singer was gone forever. Father and son were never able to escape the cycle of abuse that lasted the latter’s entire life.

After learning about how Marvin Gaye died at the hands of his own father, Marvin Gay Sr., read about the death of Jimi Hendrix. Then, learn the story of Selena’s murder.