Inside Yakutsk, Russia, The Coldest City In The World

A city of over 300,000 people, Yakutsk is just 300 miles south of the Arctic Circle and becomes so cold in the winter that residents don't wear eye glasses outside because they freeze to the skin. 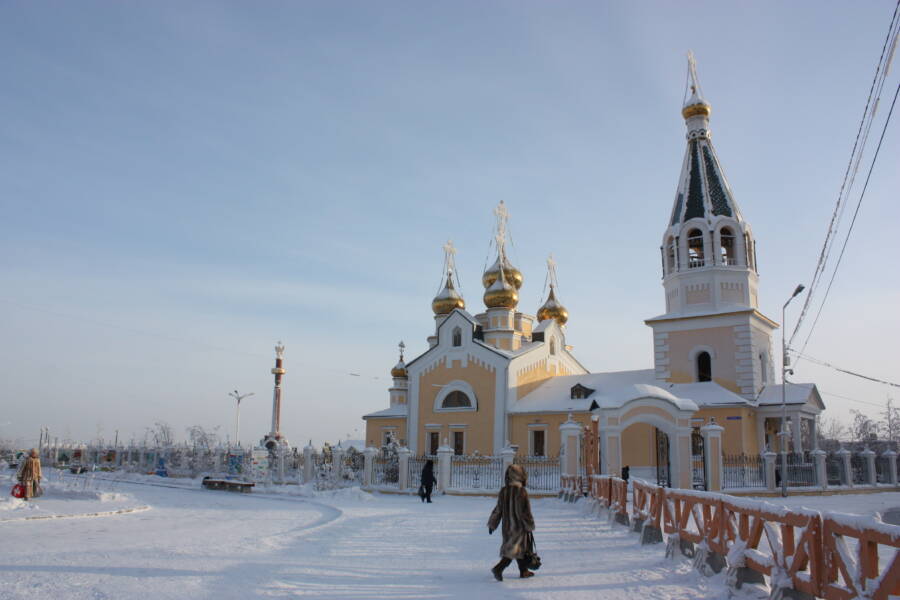 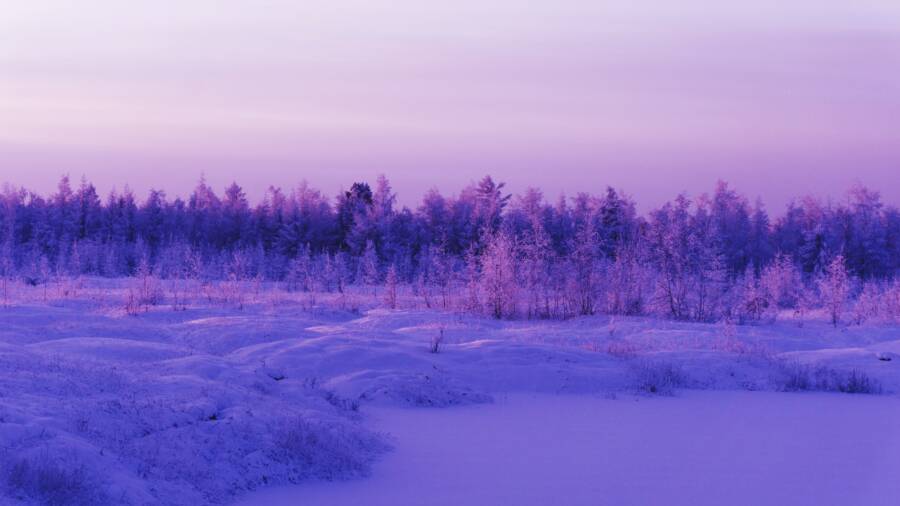 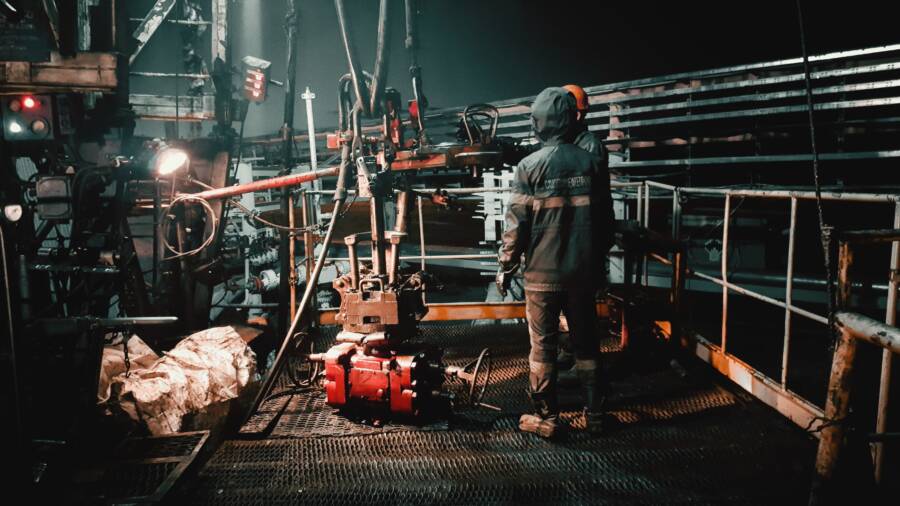 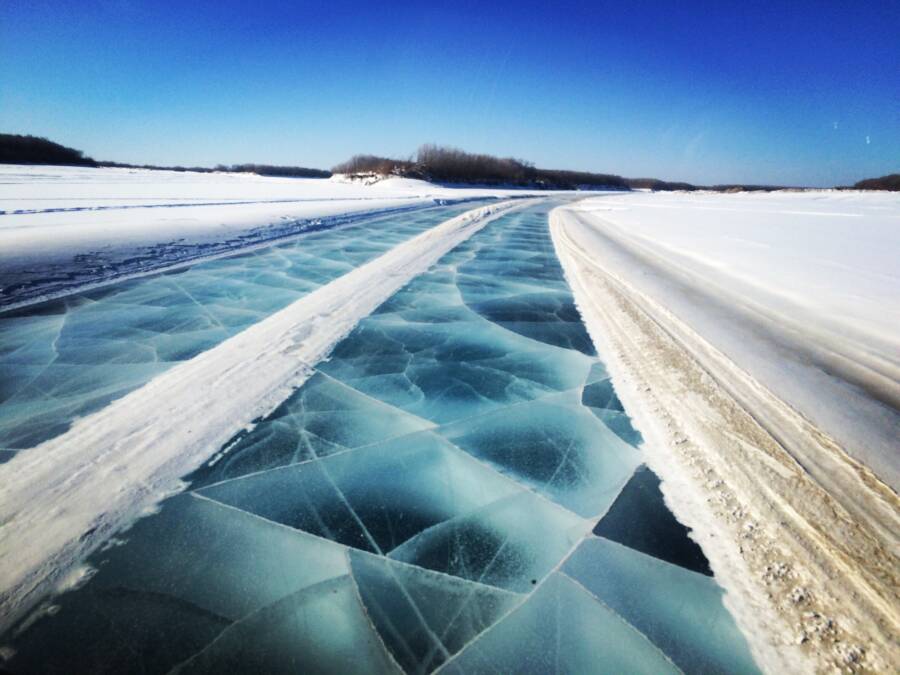 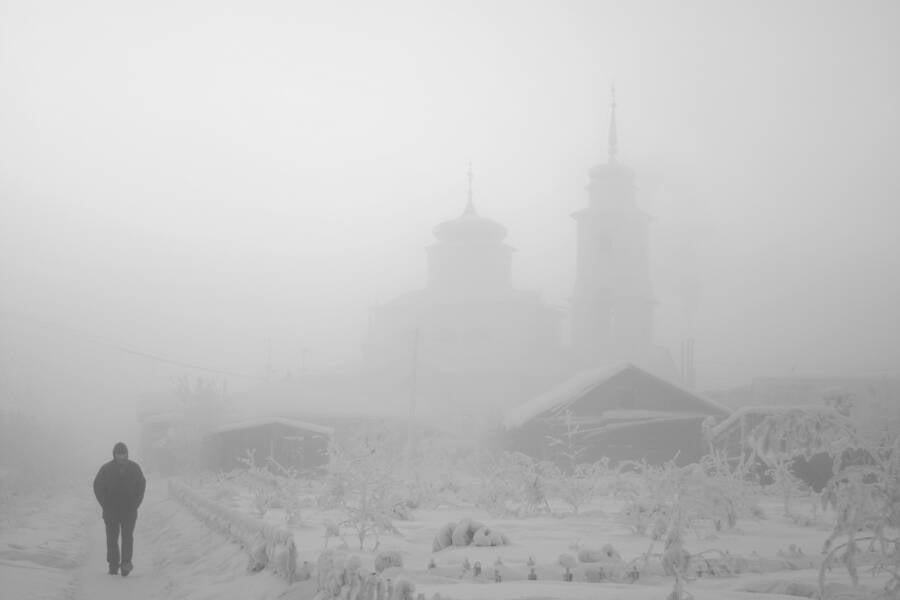 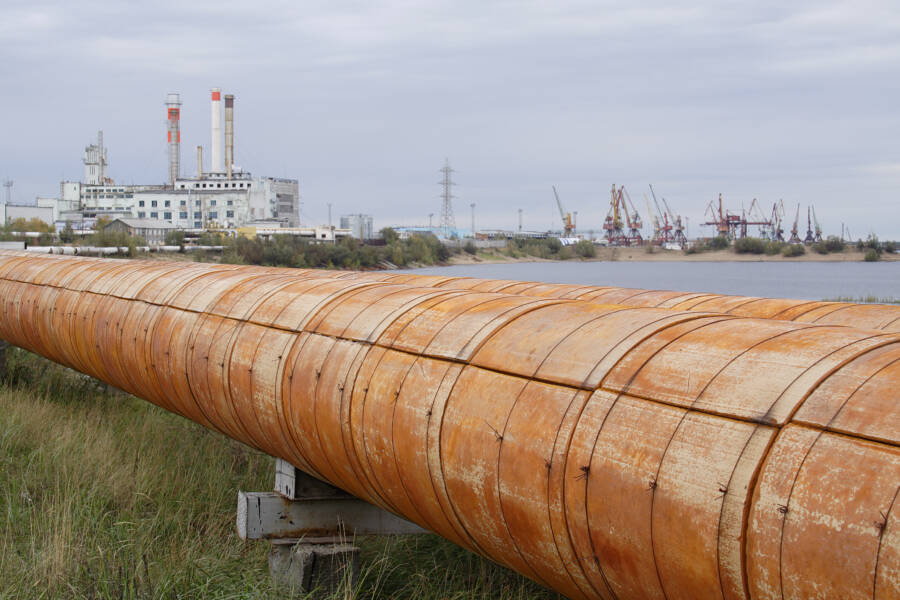 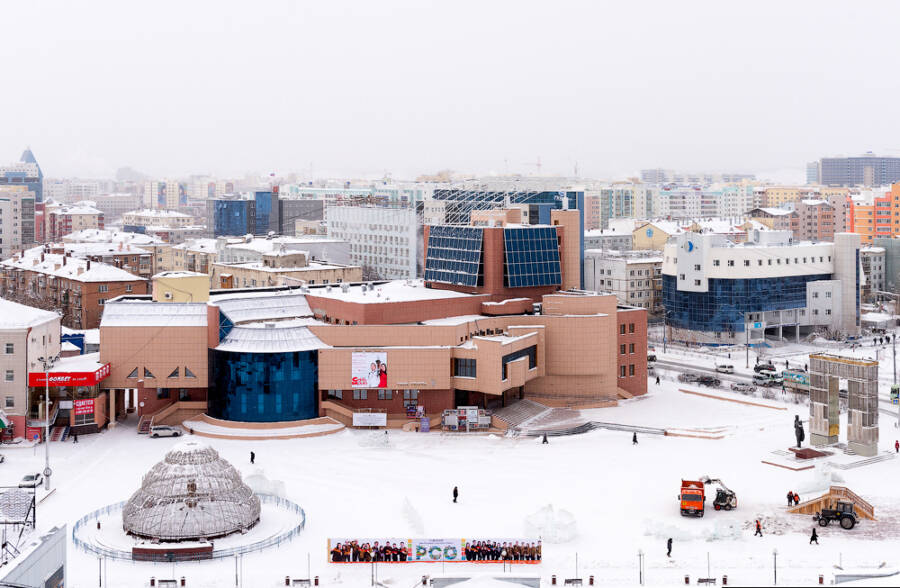 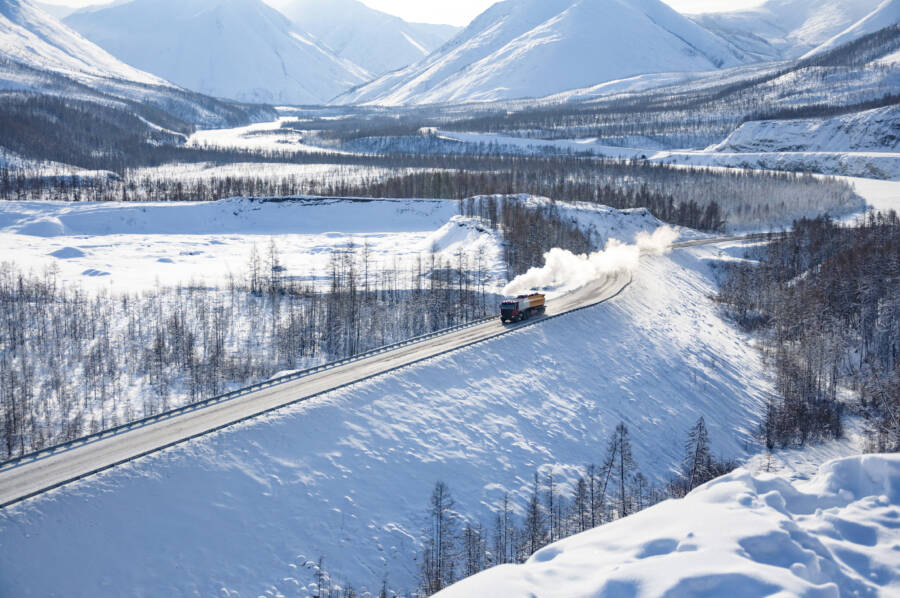 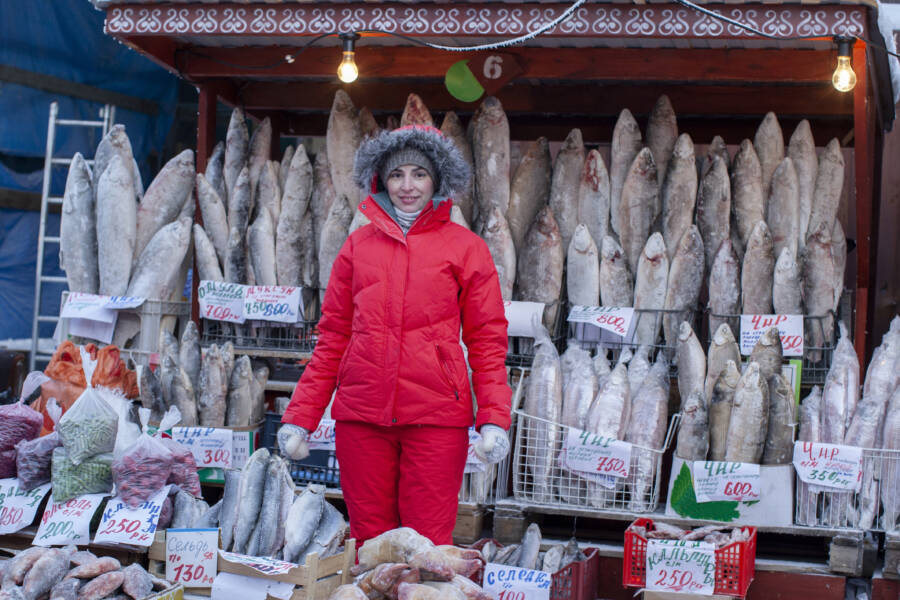 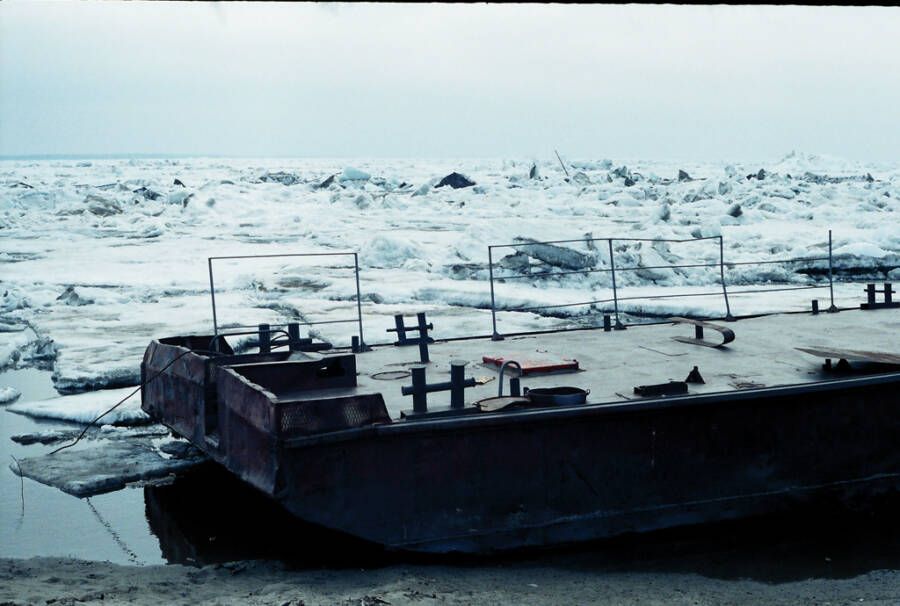 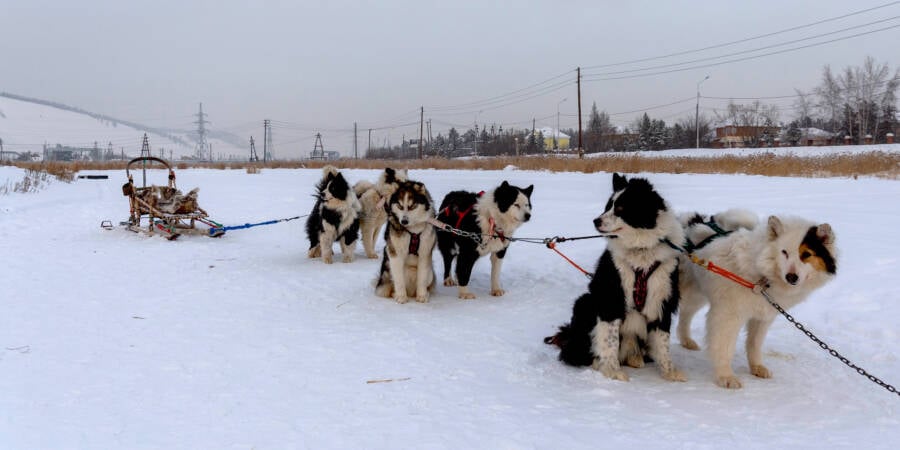 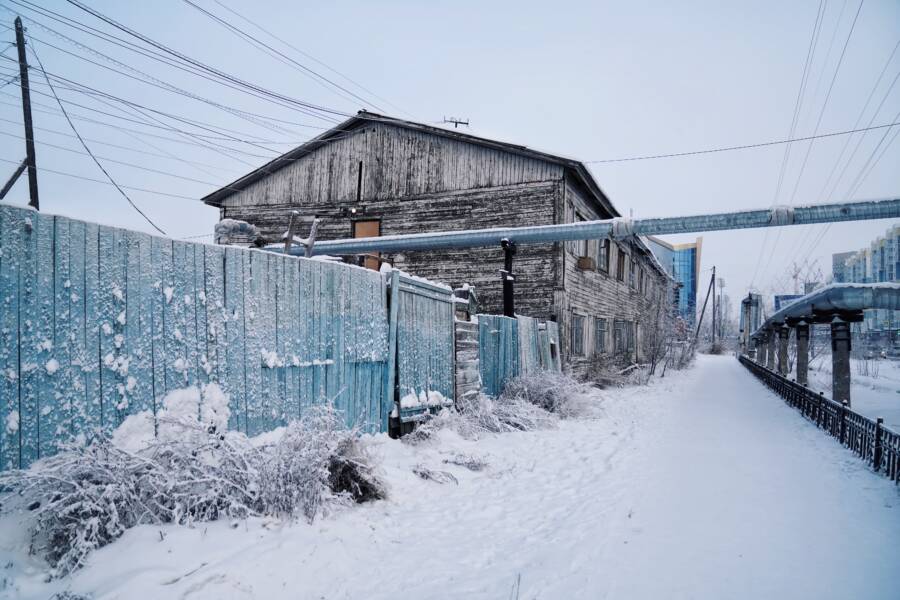 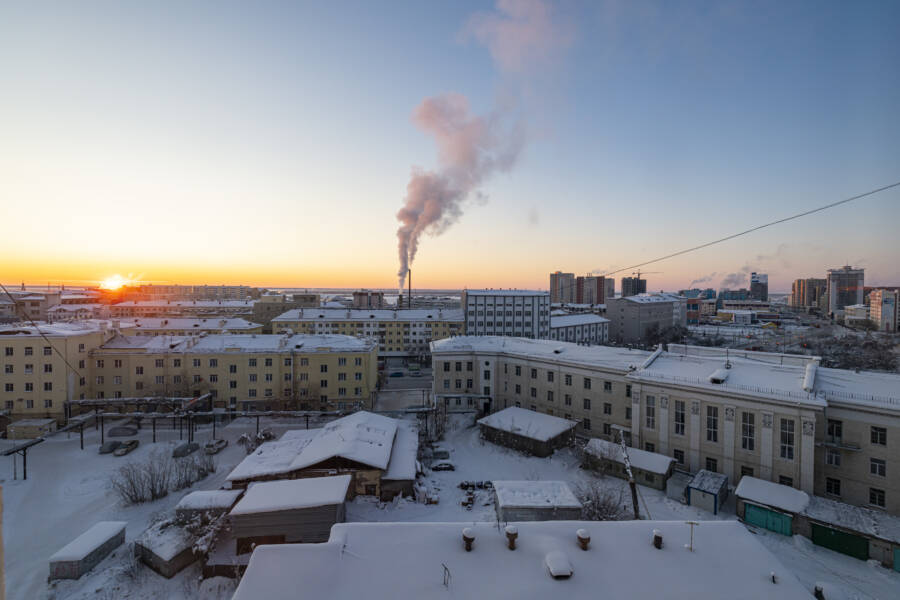 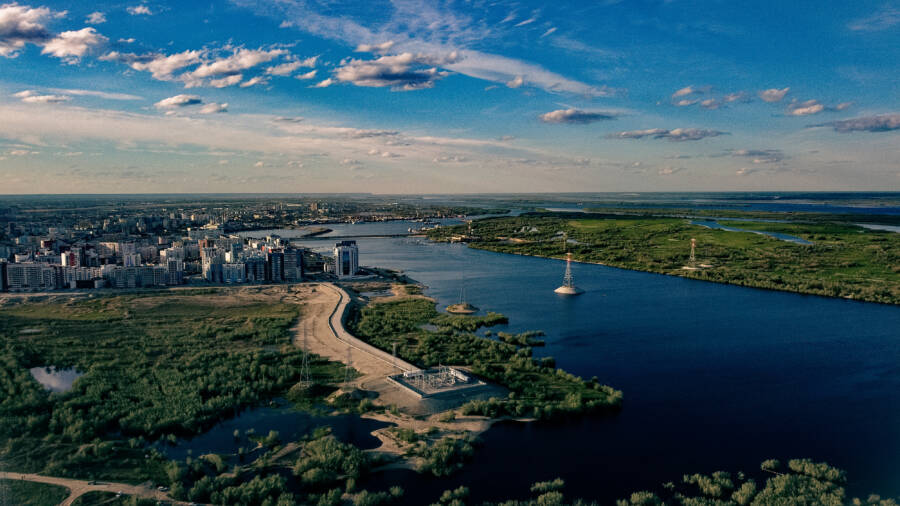 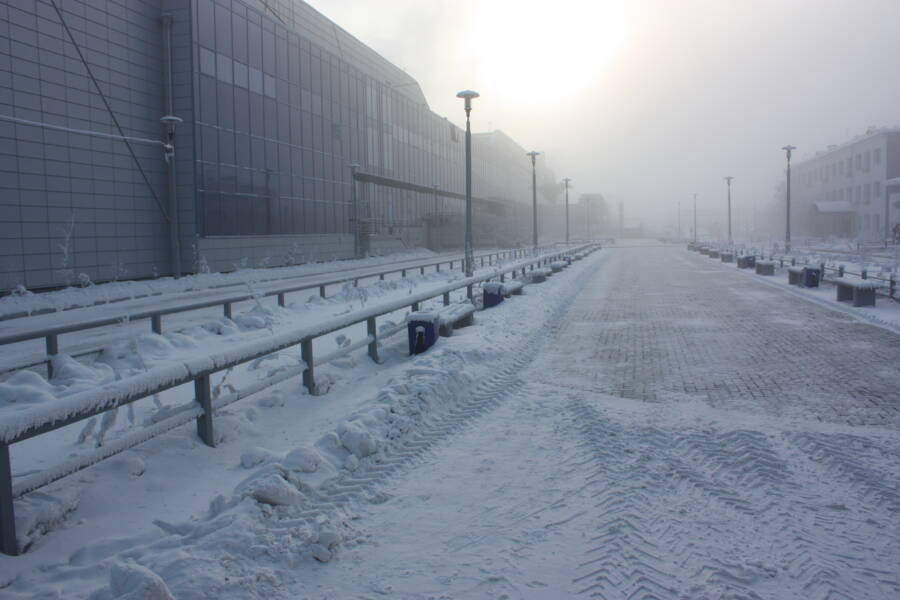 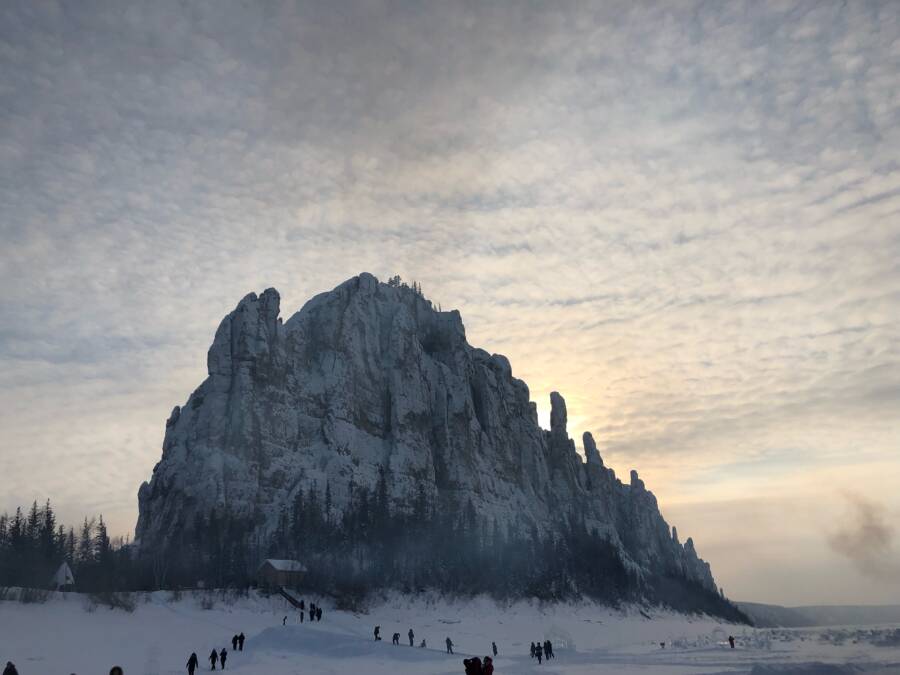 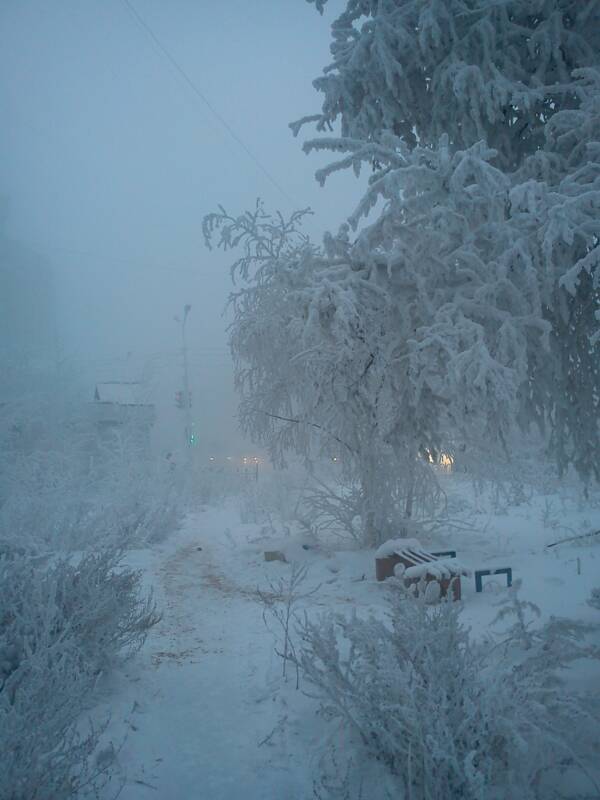 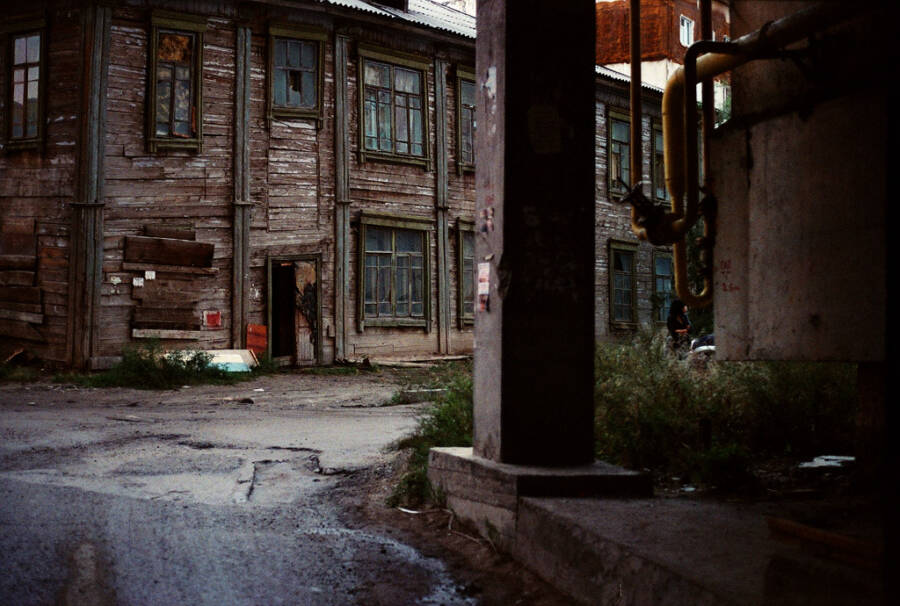 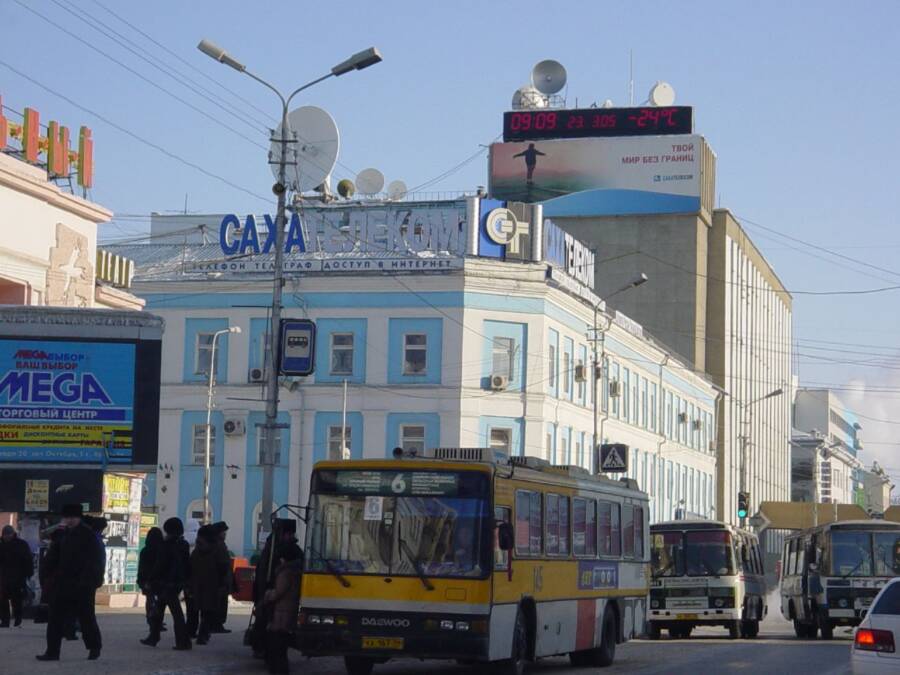 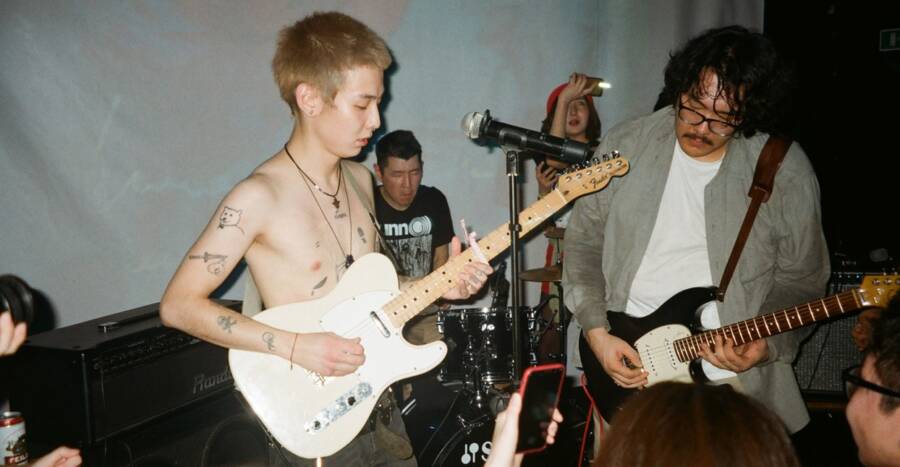 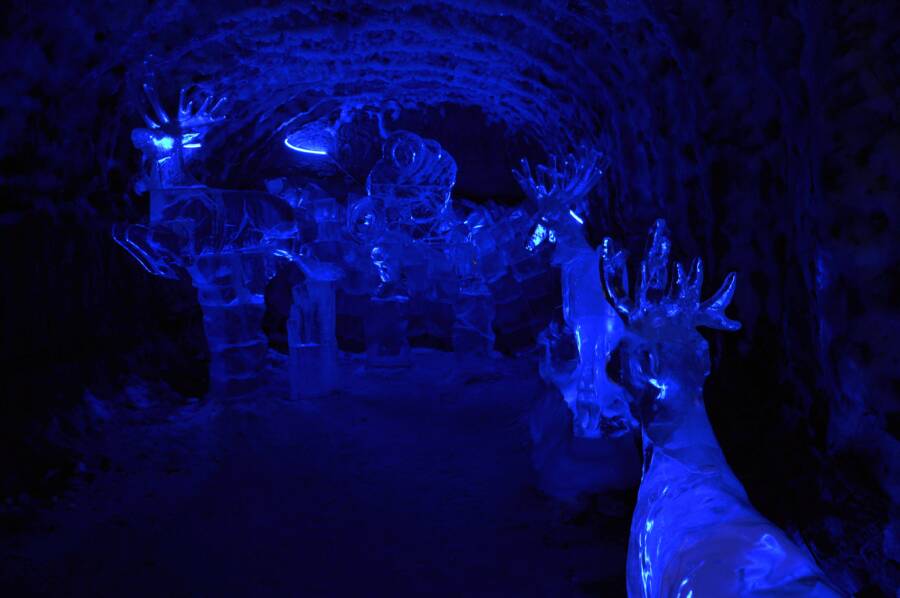 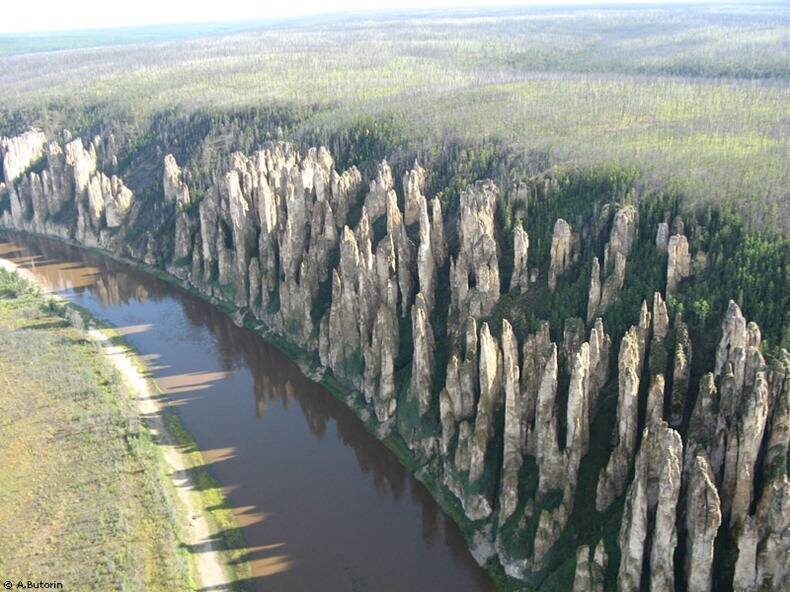 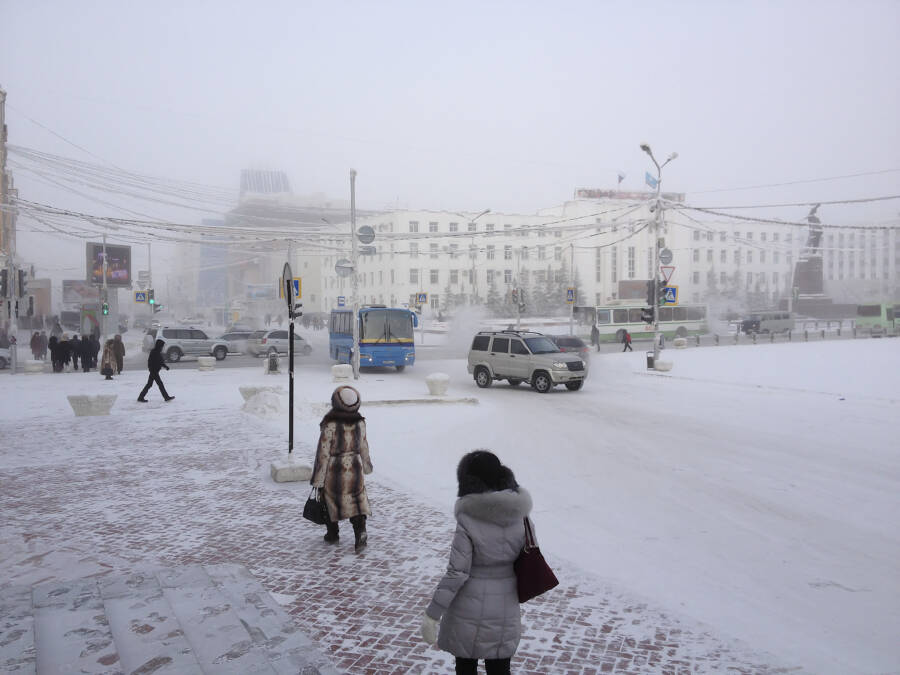 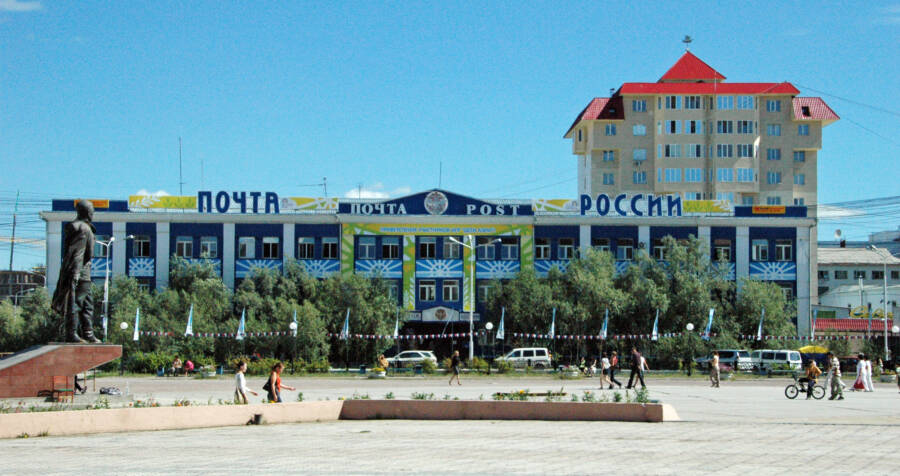 1 of 26
A pedestrian strolls by a church in Yakutsk, Russia, where where temperatures routinely hover around negative 40 degrees Fahrenheit throughout the winter. Magnús H Björnsson/Flickr
2 of 26
A beautiful purple hue tints the Yakutsk sky. Nnikita Khkhlov/EyeEm
3 of 26
By far, the largest part of Yakutsk's economy comes from regional mining of coal, gold, and diamonds. Grigorij Rahimulin/EyeEm/Getty Images
4 of 26
The bright sun reflects off of a frozen river during a clear day in the coldest big city on Earth. Argunov Viacheslav/EyeEm
5 of 26
A foggy morning in Yakutsk. “Habitation" fog covers the city when the air is so cold that the warmer air from houses, cars — even body heat — cannot rise.Strannik/Getty Images
6 of 26
Many of Yakutsk’s utility pipes are built above ground due to the constant shifting of the permafrost during freezes and refreezes. Strannik/Getty Images
7 of 26
The National Drama Theatre in the city center. Yakutsk has many theaters, a vibrant film industry, summer festivals, cruises, and even a thriving local punk scene.Wikimedia Commons
8 of 26
The Verkhoyansk mountain range on the road to Oymyakon in the Sakha Republic. Lina Shatalova/Getty Images
9 of 26
There is little need for refrigeration at Yakutsk’s outdoor markets, as the freezing air makes sure the fish and other foods stay fresh. Ayar Kuo Fromme/Getty Images
10 of 26
Winters in Yakutsk have reached temperatures as low as negative 84 degrees Fahrenheit. tetsu-o/Flickr
11 of 26
Sled dogs are still used, particularly in the rural areas outside of Yakutsk. Wikimedia Commons
12 of 26
Yakutsk is situated on a remote slab of continuous permafrost.Jörn Kamphuis/EyeEm/Getty Images
13 of 26
The sun sets over the snow-covered rooftops of Yakutsk. During December and January, daylight lasts for under six hours. Michael Runkel/robertharding/Getty Images
14 of 26
An aerial view of Yakutsk and the Lena River, where the city has a major port. During the summer, the sun stays in the sky for nearly 20 hours every day.Aleksandr Zarovnyj / EyeEm/Getty Images
15 of 26
Ice covers the ground outside the airport terminal building in Yakutsk, a city with a population of 336,274 people. Magnús H Björnsson/Flickr
16 of 26
The sun sets behind a snow-covered mountain in Yakutsk, where the weather is so cold banks grant loans for fur coats. Egor Sâcikov/EyeEm/Getty Images
17 of 26
During Yakutsk winters, locals know that you don’t go outside unless you absolutely have to. Wikimedia Commons
18 of 26
Many of Yakutsk's houses and buildings are built on stilts buried deep into the ground, which ventilate their undersides and prevent them from melting the permafrost. tetsu-o/Flickr
19 of 26
A bustling morning in the commercial center of Yakutsk, known as the administrative, political, cultural, and scientific center for the entire Far East area of Russia.Wikimedia Commons
20 of 26
One of the deepest quarries in the world — a Kimberlite pipe in Yakutia. The igneous rock Kimberlite often contains diamonds, a large contributor to the local economy. Staselnik/Getty Images
21 of 26
Emo pop-punk band Имя твоей бывшей (“Your Ex’s Name” in English) is part of the punk scene in Yakutsk. Bandcamp
22 of 26
Inside Yakutsk’s Permafrost Kingdom, a stunning museum with dozens of never-melting ice sculptures.pasha_k/Flickr
23 of 26
Lena's Pillars stand tall over the Lena River. The 650-foot-tall limestone columns are part of a 3 million-acre nature park in the region. katexic/Flickr
24 of 26
Locals navigate through a blanket of white snow covering a city street. The city is almost entirely made up of Russians, indigenous Yakuts, and Ukrainians. Reidar Hindrum/caff_arctic_biodiversity/Flickr
25 of 26
The Yakutsk Post Office. jsjgeology/Flickr
26 of 26 Inside Yakutsk, Russia, The Coldest City In The World
View Gallery

If you're a fan of extreme weather, the icy Siberian city of Yakutsk, Russia, is probably right up your alley. Not only is it the coldest city in the world, with a record winter low of negative 84 degrees Fahrenheit, but its summers are so warm that the region buzzes with mosquitos.

Situated on a remote slab of continuous permafrost, Yakutsk — the regional capital of the Sakha Republic, also known as Yakutia — has a population of 336,274 people and an average annual temperature of just 18 degrees Fahrenheit.

Many of the city's houses and buildings are built on stilts buried deep into the ground, which ventilate their undersides and prevent them from melting the permafrost. Even water and gas lines are often above ground, snaking around the city.

The good news is, Yakutsk has much more to offer than its unique climate. The city's vibrant film industry, many theaters, festivals, and thriving punk scene keep the locals busy.

Today, Yakutsk is known as the administrative, political, cultural, and scientific center for the entire Russian Far East Federal Region. 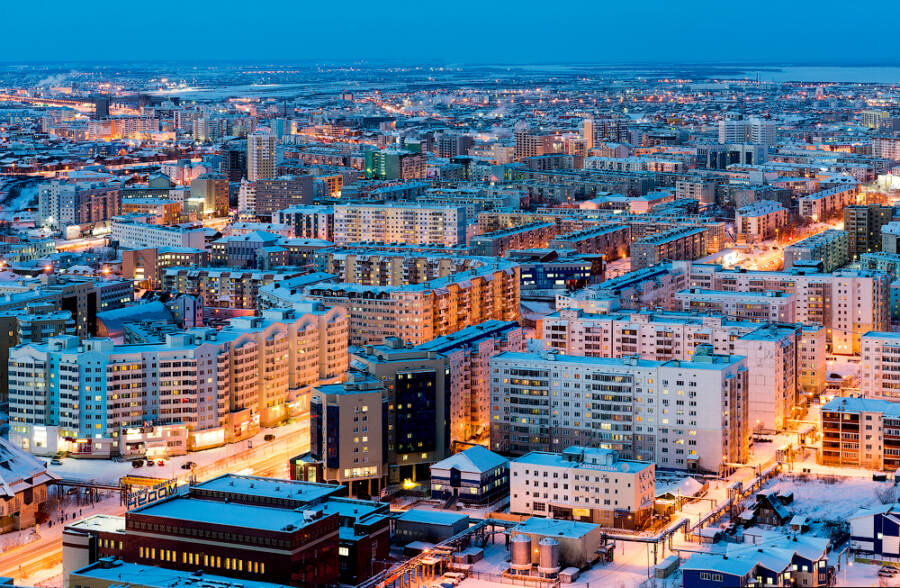 But it didn't start that way. Founded by Cossack explorer Pyotr Beketov in 1632, Yakutsk and its surrounding region served as a place of exile for Russian revolutionaries in the mid-17th century. Due to its severe climate, the government of the Russian Empire considered the area to be "a prison without bars."

The economic turning point for Yakutsk occurred during a period of industrial development in the region in the 19th and 20th centuries. Currently, the largest part of Yakutsk's economy, by far, comes from regional mining. Coal mining is common, but diamond mines are far more profitable. And within the Sakha Republic, companies produce 26 percent of the world's raw diamonds.

Gold is another hot commodity in the region, where mining operations are so large that they can be seen from space.

Before the region's gold and other minerals were discovered in the 1880s, locals relied on dealing furs and other goods, transporting them on the Lena River, which hugs the eastern side of Yakutsk.

Despite the plentiful natural resources, many living on the outskirts of the city deal with great poverty. Some don't even have enough resources to live in shelters much better than they provide for their farm animals. The average monthly wage of Yakutsk is the equivalent of about $600 per month.

At least banks are willing to grant loans for long fur coats, which can each cost more than multiple months' income. The residents of Yakutsk know that in the winter, you don't go outside unless you have to. But when you do, you have to dress for survival with layers of wool, down, and fur.

As for the typical cuisine, those living in the region rely heavily on dairy products, meat, fish, and foraged items, such as berries. Reindeer meat is popular, and locals often serve a dish called Indigirka, which consists of slightly thawed fish cubes, topped with onion, salt, pepper, and vegetable oil.

The Natural Beauty Of The Coldest City On Earth

In addition to icicles and snow, a shroud of "habitation" fog covers the city when the air is so cold that the warmer air from houses, cars — and even body heat — cannot rise. The fog contributes to the city's otherworldly winter appearance.

Yakutsk is a major port on the Lena River, one of three rivers that flow into the Arctic Ocean. The Lena Pillars are one of the main tourist attractions. The 650-foot-tall limestone columns look over the river and are part of a 3 million-acre nature park with tundra, taiga, and dunes.

There is no bridge or road anywhere in the Sakha Republic that crosses the Lena River. One of the most remote cities in the world, there's only one road connecting Yakutsk to the rest of the highway system — the Lena Highway. That road is only accessible by ferry in the summertime, or by driving directly over the frozen water in the dead of winter.

And although Yakutsk does host two airports, the Yakutsk Airport and the Magan Airport, flying to the city during the colder months can, at times, be impossible. With an average winter temperature of negative 40 degrees Fahrenheit, the cold can dip low enough to freeze jet fuel.

However, once in Yakutsk, there is plenty to do. Among other attractions, there's the Museum of Mammoths, which houses whole mammoth carcasses that were buried by avalanches or floods and pulled from the permafrost.

There is also the Permafrost Kingdom, a stunning underground museum with dozens of ice sculptures that never melt. There are statues of local pagan gods, Buddha, Ded Moroz (Russia's Santa Claus), and even an interpretation of Picasso's "Guernica" sculpted in ice.

If you can make it through the eight-month-long winters, there are certain rewards. One traveler remembers of her trip, "I visited in the summer, and everyone takes advantage of the warm weather and long evenings to promenade in the streets. They pick various wild berries all summer. I drank bright red lingonberry juice at every meal."

After learning about Yakutsk, Russia, the coldest city in the world, read about the nearby village of Oymyakon, the coldest permanently inhabited place on Earth. Then, take a virtual trip to a Swedish hotel that's made entirely of snow and ice.