Why Did These Five Men Volunteer To Stand Directly Under An Exploding Nuclear Bomb? (VIDEO)

Men and women have done all sorts of strange things in the name of their nation — and this may be one of the strangest. 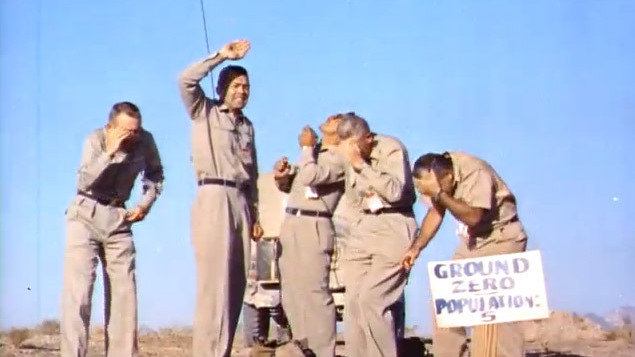 Sometimes people look back on their youth and wonder, “What was I thinking?”

Like: “Why would I ever wear such giant shoulder pads?”

Or, maybe: “Why did I volunteer to stand right under an exploding atomic warhead?”

The former, some of you can probably relate to. The latter, I’m guessing, not so much.

But that’s how five young Air Force officers decided to spend their day on July 19, 1957.

Huddled together on a piece of Nevada dessert dubbed “Ground Zero, population: 5,” they stood (I repeat: voluntarily) for the cameraman (who, incidentally, was not there by choice) as two F-89 jets flew overhead.

Shielding their eyes against the harsh sun, they looked up as the countdown began: “30 seconds”

18,500 feet above them, one of the jets had shot a nuclear missile armed with a 2-kiloton atomic bomb.

“There is the ground wave!” the narrator rejoices at the sound of an explosion. “It is over, folks! It happened! The mounds are vibrating! It is tremendous! Directly above our heads! Aaah!”

You probably have some questions. Like, why, how, who, and — again — why?

The video was commissioned by the United States Air Force, which was trying to prove how safe low-grade nuclear bombs are.

Russia had been developing similarly powerful weapons and the government didn’t want people to worry too much.

The footage was kept in government archives ever since and was just uncovered a few years ago by a Russian man searching through the U.S. National Archives, according to NPR.

“Why not? Our past is open to all,” the reporter noted.

Though this stunt is something you couldn’t pay most people to partake in today, these five men actually weren’t at too much risk of injury.

“The thing is, in that particular explosion, those guys would have been in a pretty safe position,” science historian Alex Wellerstein told NPR. “The bomb itself was a small one (by nuclear standards — 2 kilotons) and it was way, way above their heads. They weren’t in a zone to be too affected by the immediate radiation. The bomb was small enough and high enough that it wouldn’t have sucked up dust to produce much fallout.”

But what about the lingering radiation?

The cameraman, George Yoshitake, was the only person who had not signed up for this terrifying video shoot. He was also the only person involved who was apparently still living at the time the NPR article was written in 2012.

Of course, this doesn’t mean we should be blowing up nuclear warheads like fireworks.

The government has spent about $150 million compensating “onsite participants” at this Nevada Test Site. Additionally, about $813 million has been paid to people who lived downwind from the site in a community called St. George, Utah.

“The folks in St. George were hit with explosion fallout several times over the years — once these unwilling citizens were even forced to stay inside their home for hours and prohibited from washing their cars until they became less radioactive.”

So, despite the apparent good time that the guys in the video are having, it’s probably best to not hang out around nuclear missiles.

If you do want to see an explosion, however, check out this 1953 video of the beautifully named “Annie Nuclear Test.”

Nothing happens until 2:24, when the bomb bursts. Then — because of the long delay between the speed of light and sound — the blast sounds 30 seconds later:

Next, read about the time that Cold War Britain patented a flying saucer. Then, check out more of the U.S. government’s recently declassified nuclear test footage.