Built on sandstone rock pillars and silhouetted against the Grecian skyline dating back to the 12th Century, the Meteora Monasteries are a sight to behold. 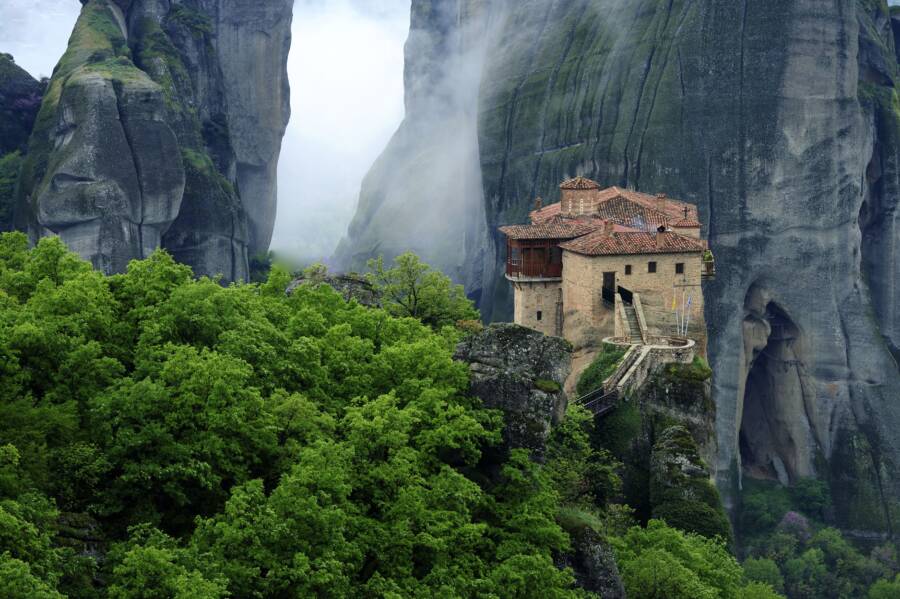 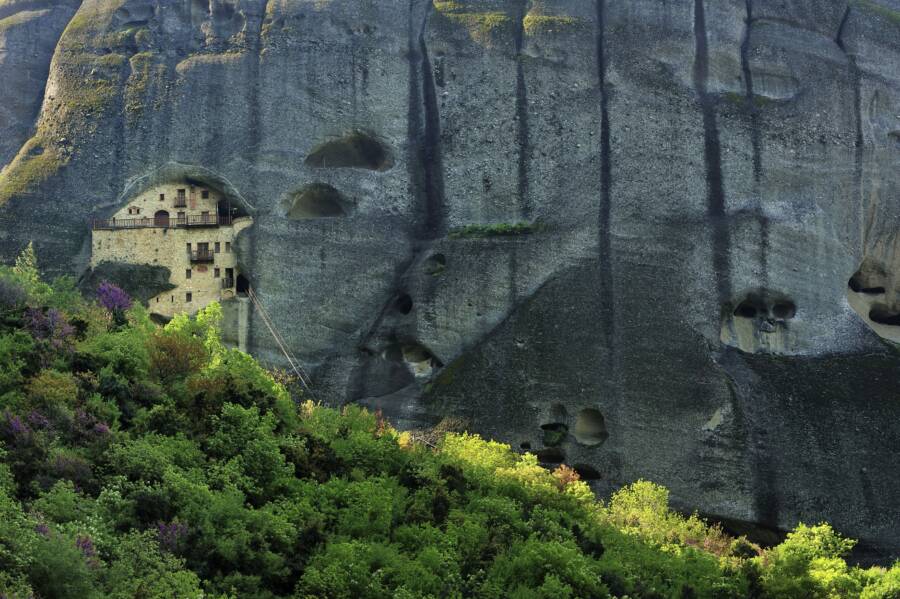 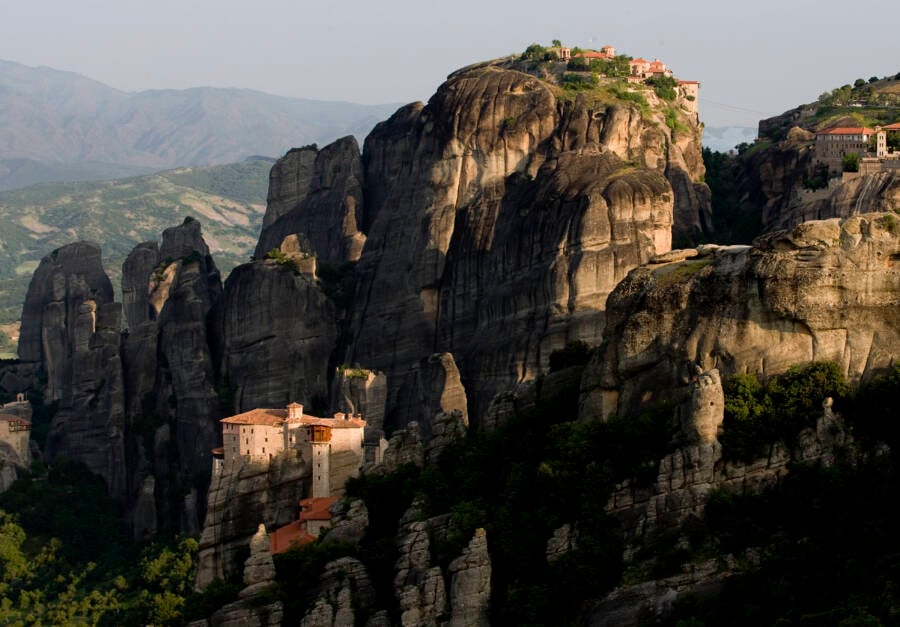 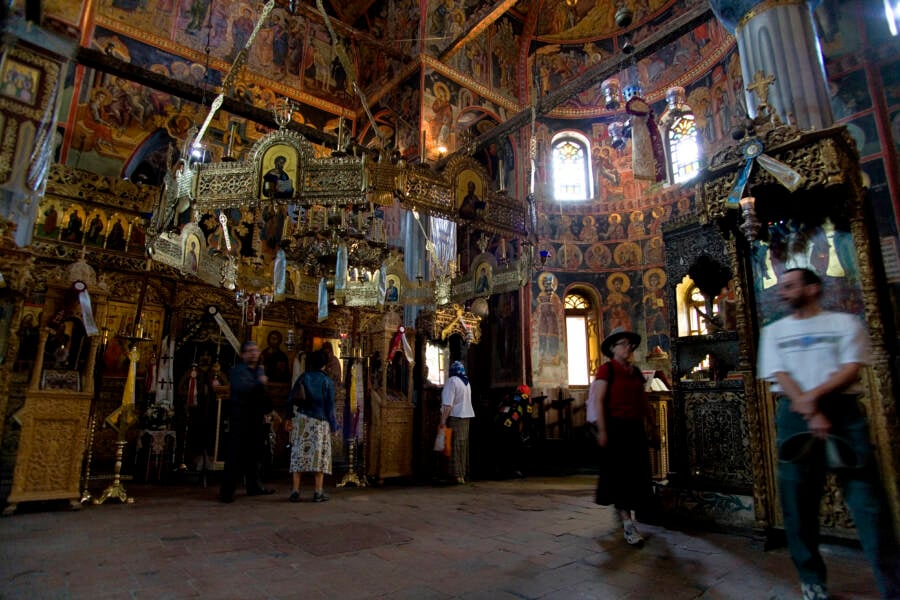 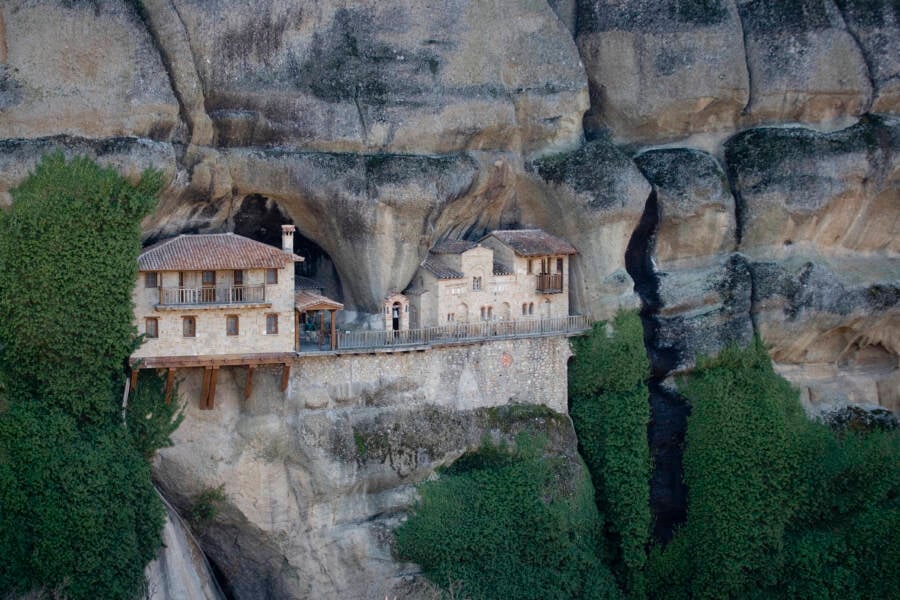 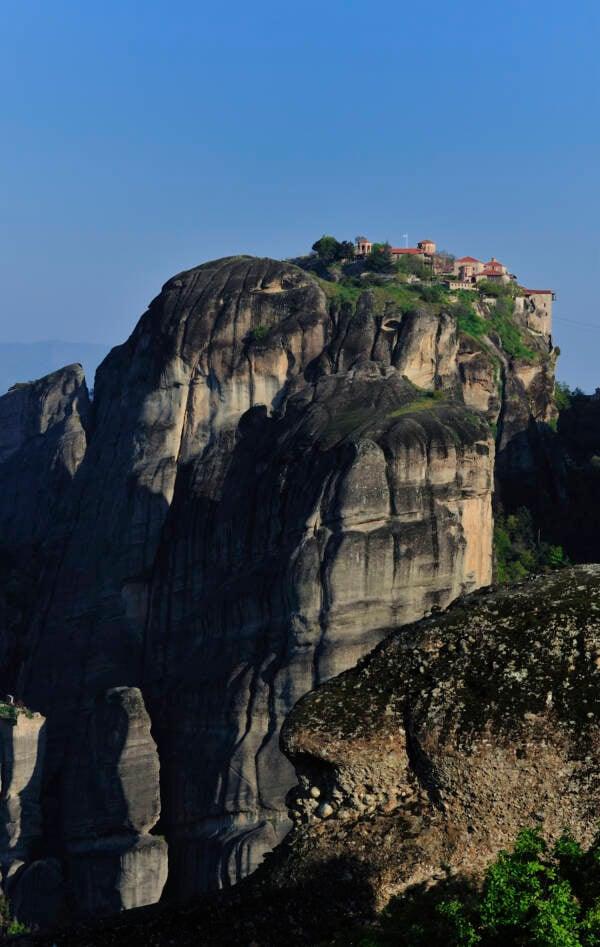 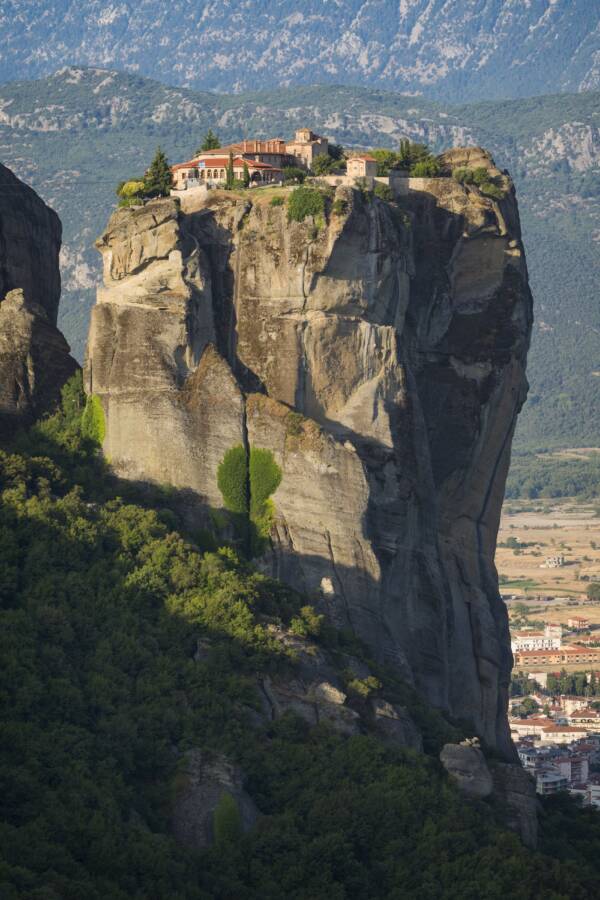 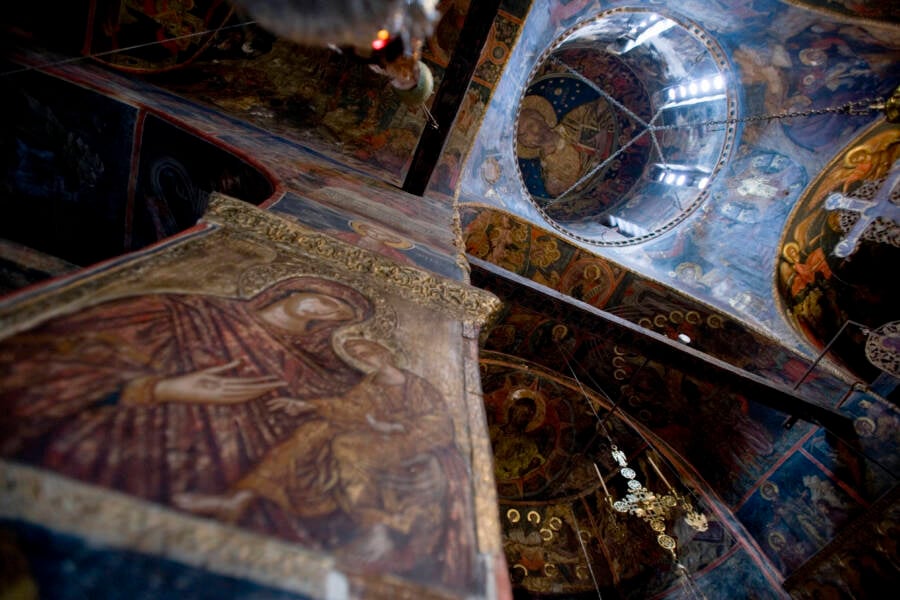 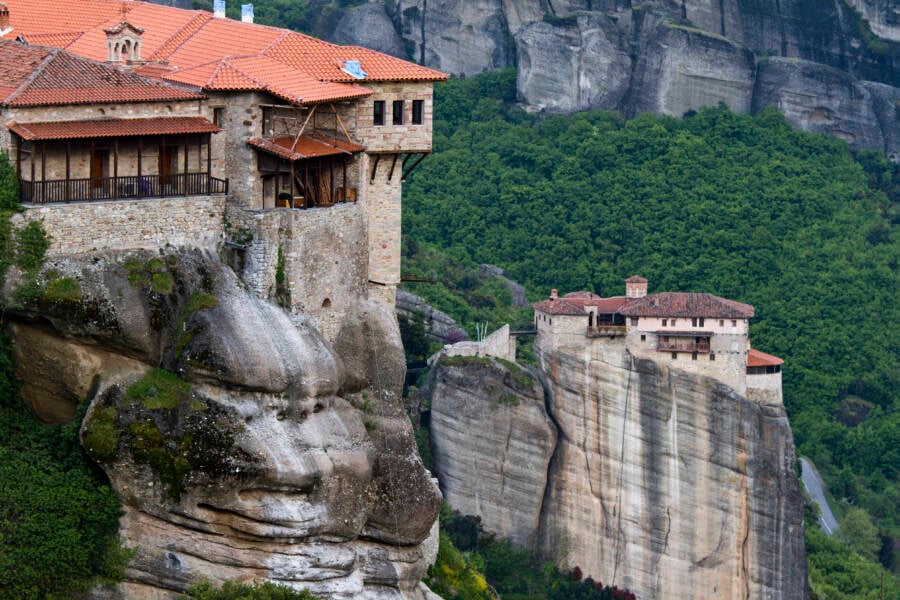 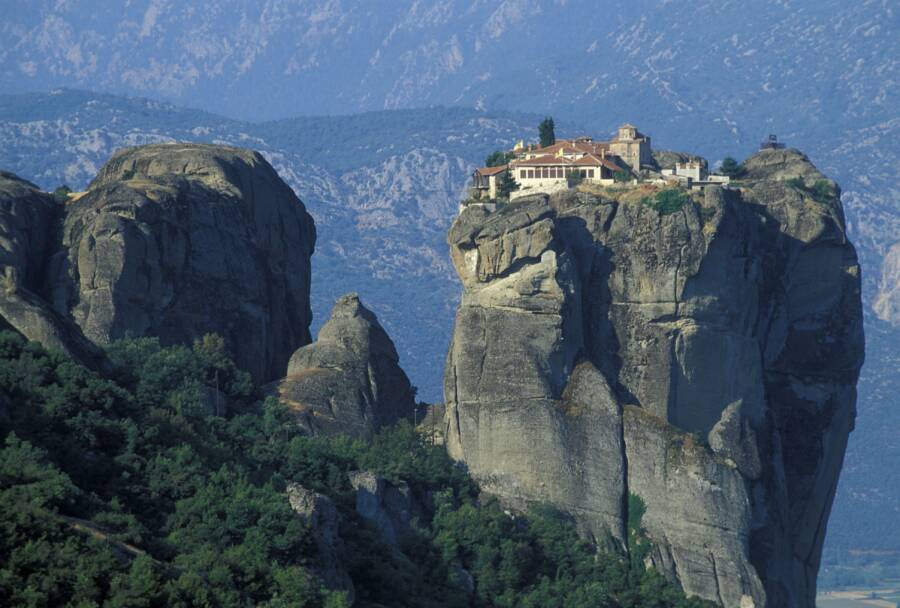 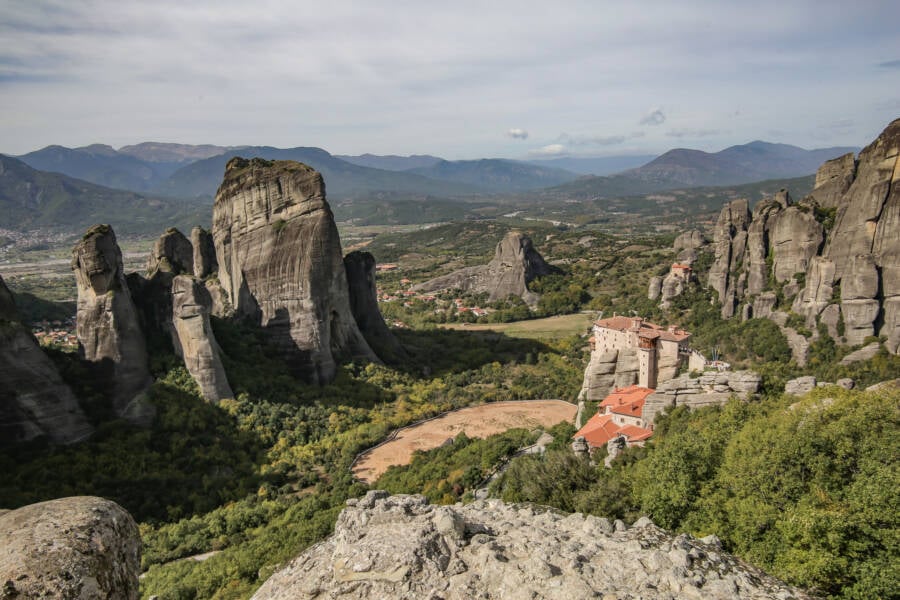 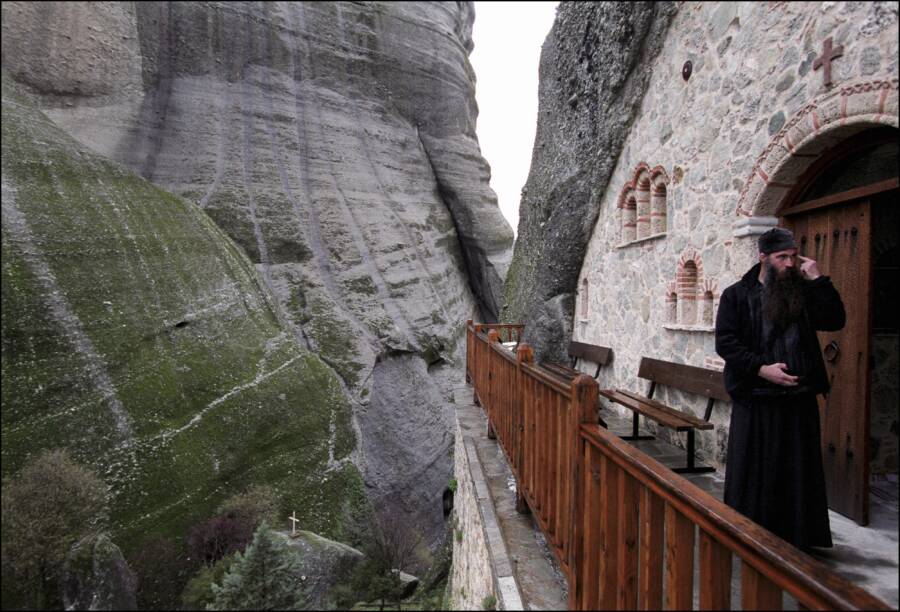 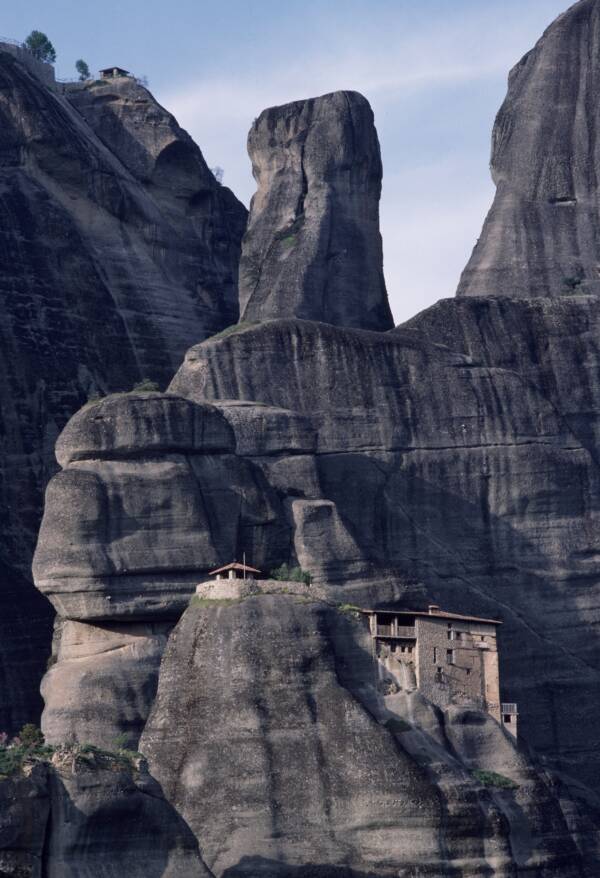 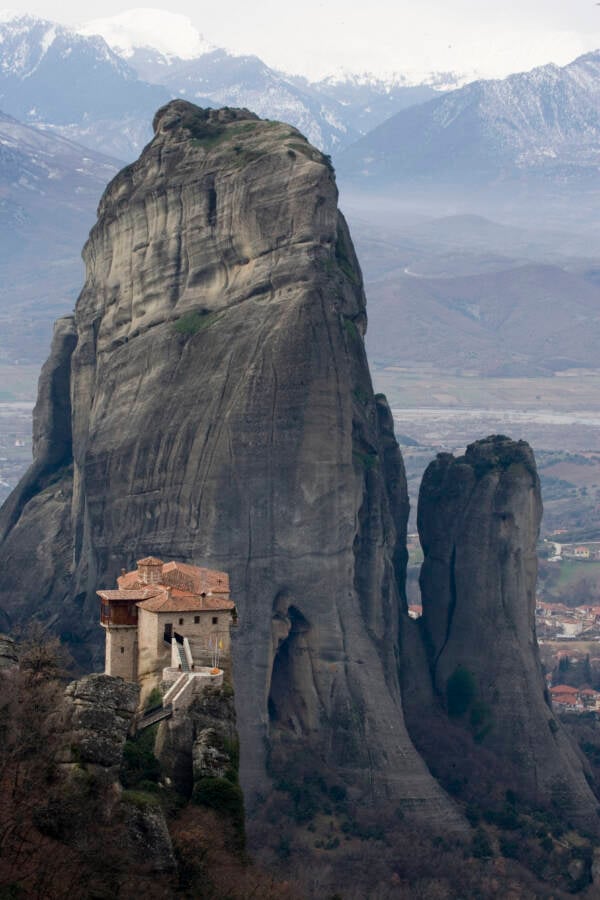 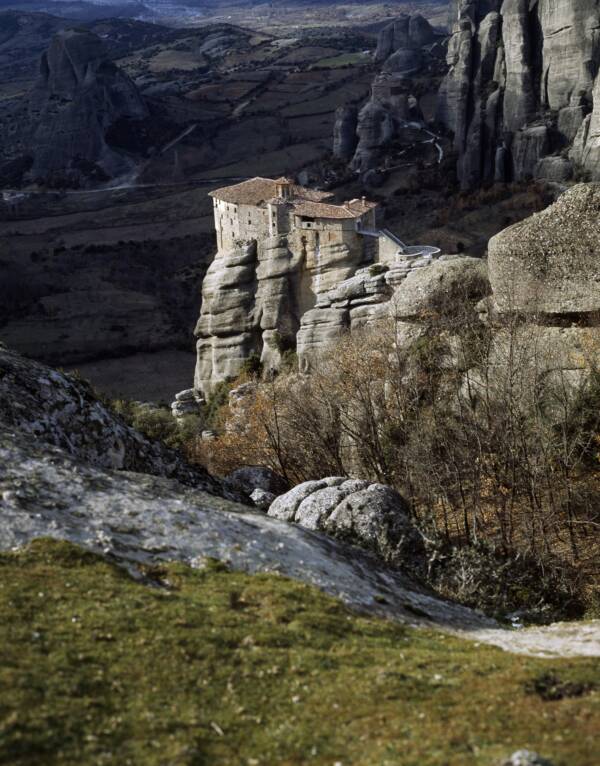 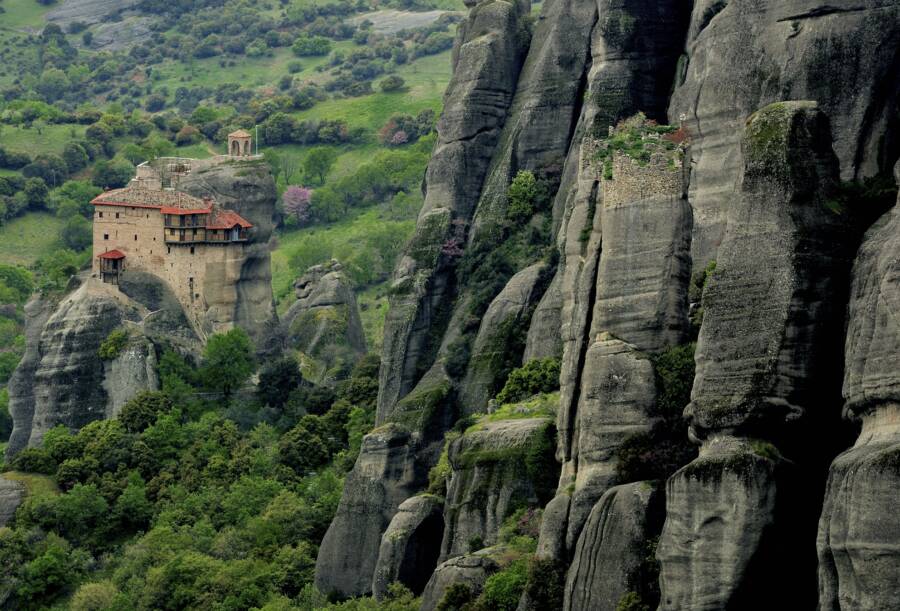 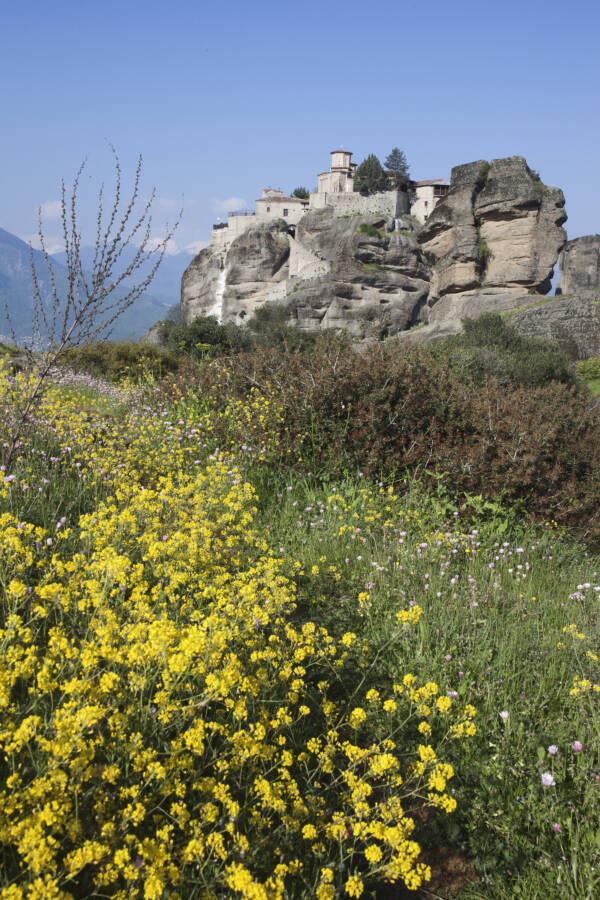 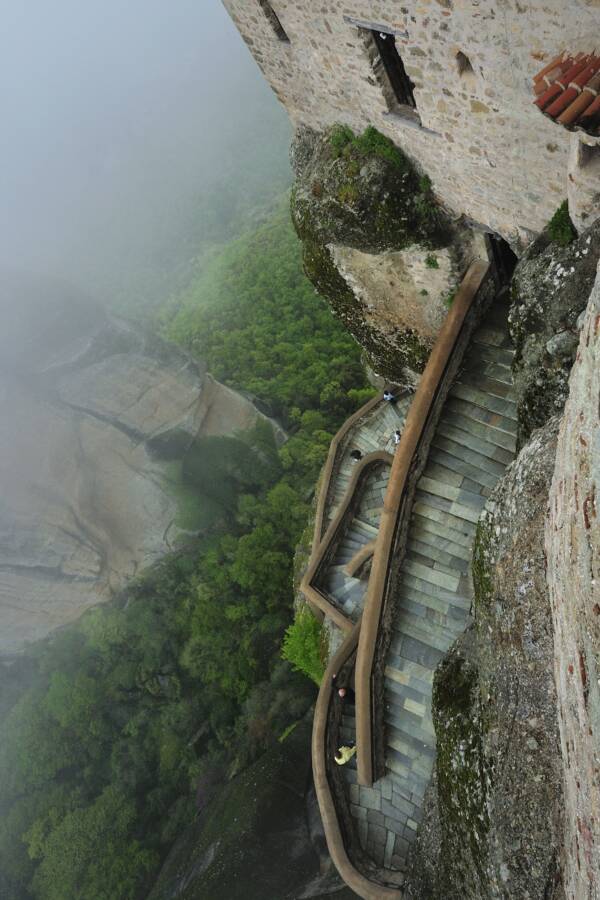 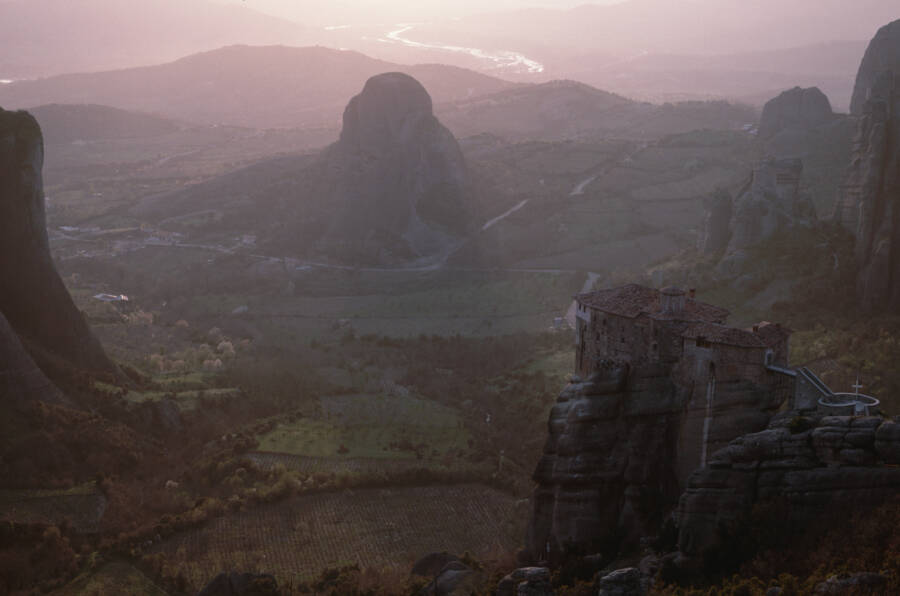 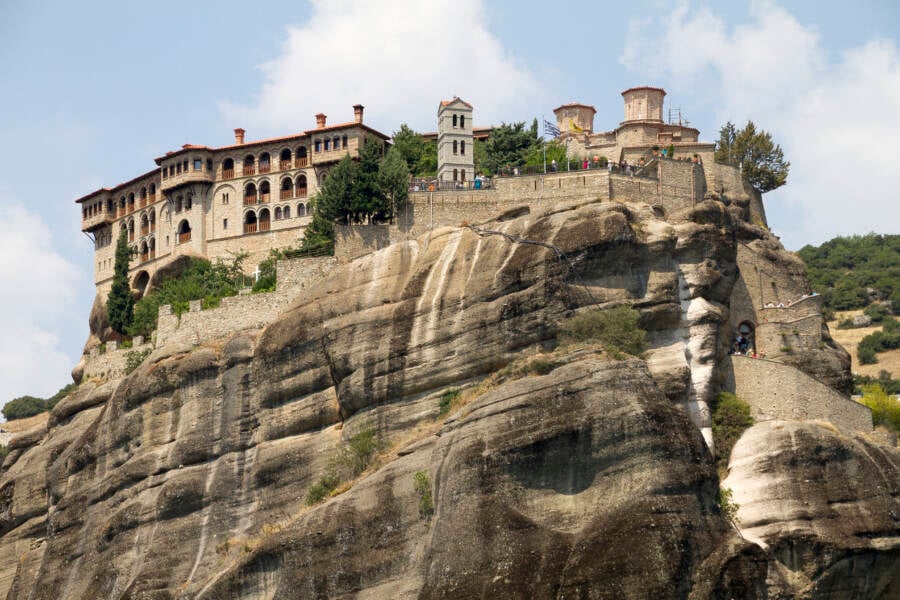 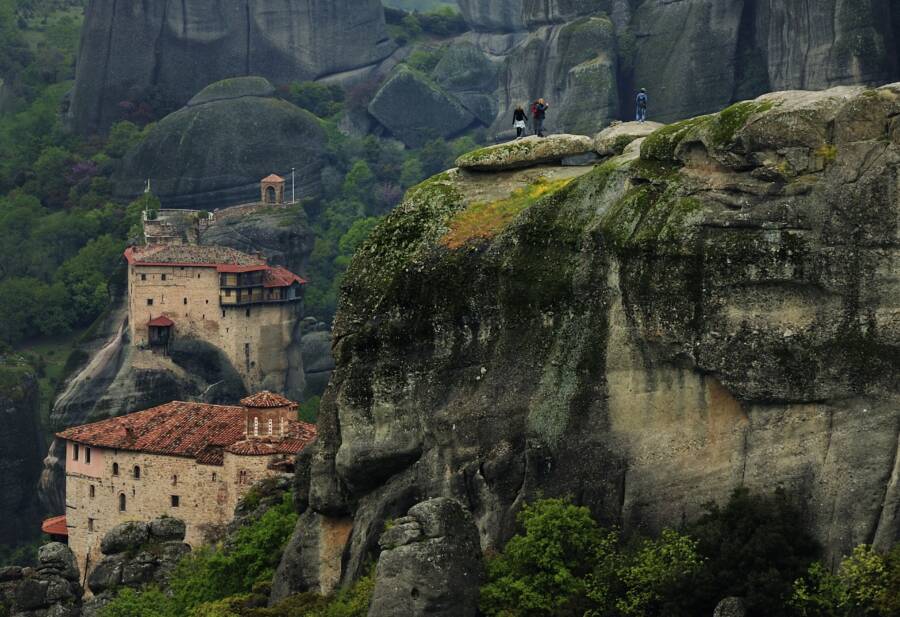 Perched atop quirky rock formations in the Plain of Thessaly near the Pindus Mountains in central Greece lies the fantastical Monasteries of Meteora. The name itself — Meteora — can be loosely translated to English meaning "suspended in the air" which these religious temples certainly appear to be. These monasteries are some of the world's oldest, largest, and precariously-built religious spaces and have become an ancient symbol of Christianity.

The Meteora Monasteries In The Sky 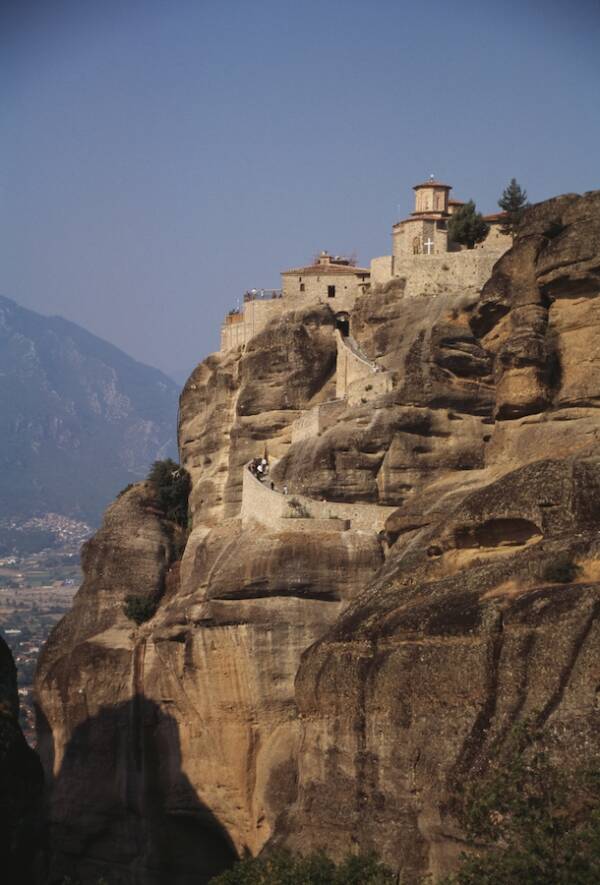 Getty ImagesBefore the monastery structures were built, monks lived in the caves of the Meteora mounts.

The Monasteries of Meteora sit atop towering sandstone formations that rise 1,000 feet above the plains. These towering rocks are essentially layers of sediment that have piled up in a pillar-like formation, creating a geological wonder like no other.

But the hilly sandstones are not the only thing that make Meteora unique. The appearance of these giant natural structures are made even more whimsical with the addition of the monasteries perched neatly among its crevices. The elevated temples are known as the Monasteries of Meteora, home to a group of hermits and monks for thousands of years.

The earliest structures date back to roughly 23,000 years ago. Before any construction took place, those who inhabited the area lived in caves that tunneled deep into the pillars of the Meteora rocks. These were were first carved into the rocky formations high above the ground by recluse monks during the 12th Century. These caves consisted of rudimentary walls at the entrances, and Neolithic and Paleolithic artifacts that illustrate a colorful history of the early inhabitants have been found inside.

These sky-high monks and their secluded haven were first unearthed much earlier in the 9th Century by the great Saint Athanasios Koinovitis, who brought a group of followers to the rocky pillars in search of the hermit monks who were believed to live in the fissures and caves that dotted the Meteora rocks.

Indeed, the hermit monks had built their lives among the towering rocks and were adept at climbing the treacherous terrain. They eventually taught Koinovitis and his followers how to scale the cliffs to reach the most habitable spots.

It was most certainly a peculiar place to build a place of worship. But the height of the caves on Meteora combined with the risky climb meant that the monks lived in relative solitude, free to meet for worship without interruption.

Raptured by the promise of religious solitude for his fellow followers and inspired by the hermit monks' free-climbing lifestyle, Koinovitis urged his people to build their own Holy haven among the clouds. 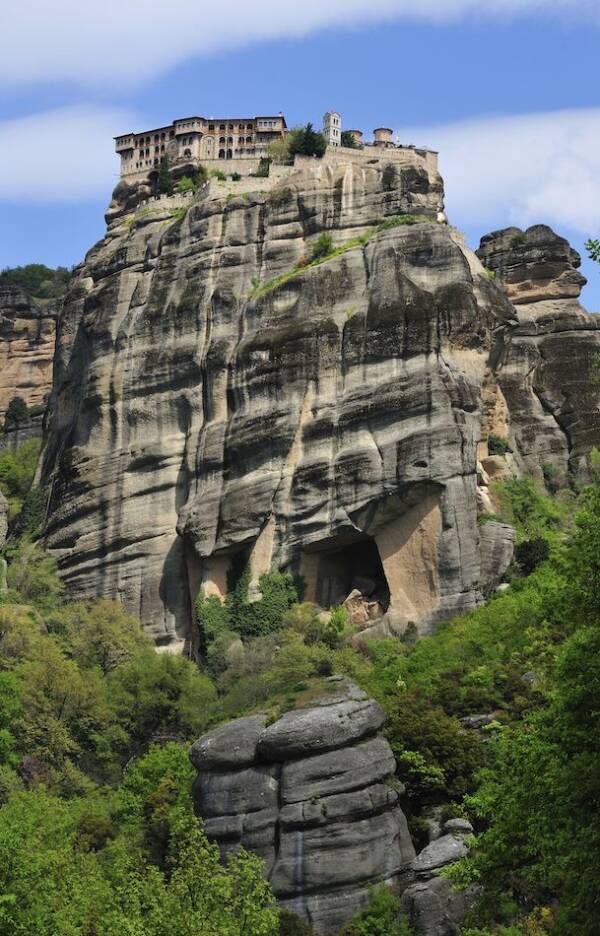 Getty ImagesThe Meteora Monasteries have been designated as a UNESCO world heritage site.

Thus, the first of the high-climbing monasteries was born, the Great Meteoron Monastery, distinguishable by its form that looks as if it was baked into the Meteora cliffside.

As the years progressed, Greece found itself in economic and political turmoil. Seeking refuge from neighboring Turkish attacks, the monks moved out of their caves and began building monasteries high up on the tops of the Meteora rock formations as well, adding more monasteries to the skyline.

In total, they carved 24 monasteries into the tops forming what is now recognized as the Meteora Monasteries. Back then, these unusual structures were only accessible by outrageous modes of commute on hanging ladders or by windlasses.

For the next 400 years, people and goods reached the monasteries by nets, ladders, and baskets held together by ropes that broke "when the Lord let them break."

While these high-altitude temples were dreamy and offered a unique respite from the worldly worries on the ground, the extreme risk involved in traveling to the top of the Meteora pillars ensured that the monks remained unbothered.

The Monasteries Of Meteora Today 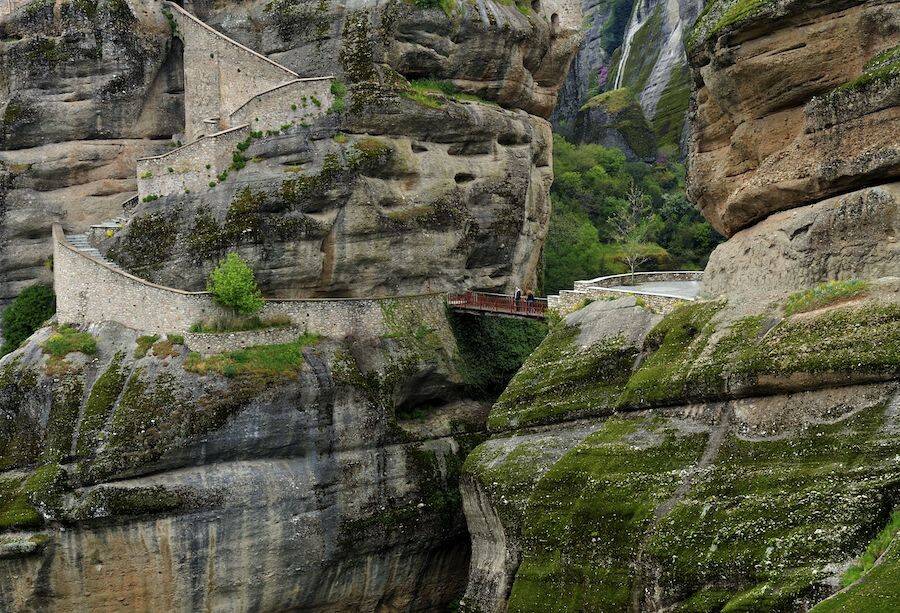 Getty ImagesSteps leading to the Varlaam Monastery at Meteora.

Unfortunately, only six of the original Monasteries of Meteora remain active. In the 1920s, steps were cut into the rocks to make the monasteries more accessible – which, in turn, made them more attractive to tourists. Then in 1988, UNESCO granted the "heavenly columns" status as a world heritage site.

Thousands of outsiders visiting the town of Kalambaka, where Meteora's rocky towers reside, are now able to scale the geological wonders easily step-by-step. But even today, many of the ancient lifting systems that were initially used by the monks are still visible.

In the Monastery of Agia Triada, visitors can see examples of ancient climbing devices once used to haul people and artifacts up to the lofty buildings. Open air cable cars used to ferry monks from one monastery to another still stretch between several of the buildings, giving visitors a frightening glimpse of how the monks once traveled.

Rock climbers in particular arrive from all over the world, attracted by the natural allure of the Meteora Monasteries.

The sheer cliffs and the craggy surface are enticing for seasoned climbers and it's not unusual to see one or two of them dangling beneath the cliffside temples. Some paths have been forged by previous climbers, such as the "Iron Road" which leads to the top of the Great Saint, the tallest mountain in Meteora.

One of the pillars has been dotted with chains and ropes that were intentionally left behind by former climbers to lead other visitors up the safest route.

In addition to climbing, many tourists enjoy mountain biking around the area, skiing and snowboarding in the winter, and hiking through the plains that surround the pillars. 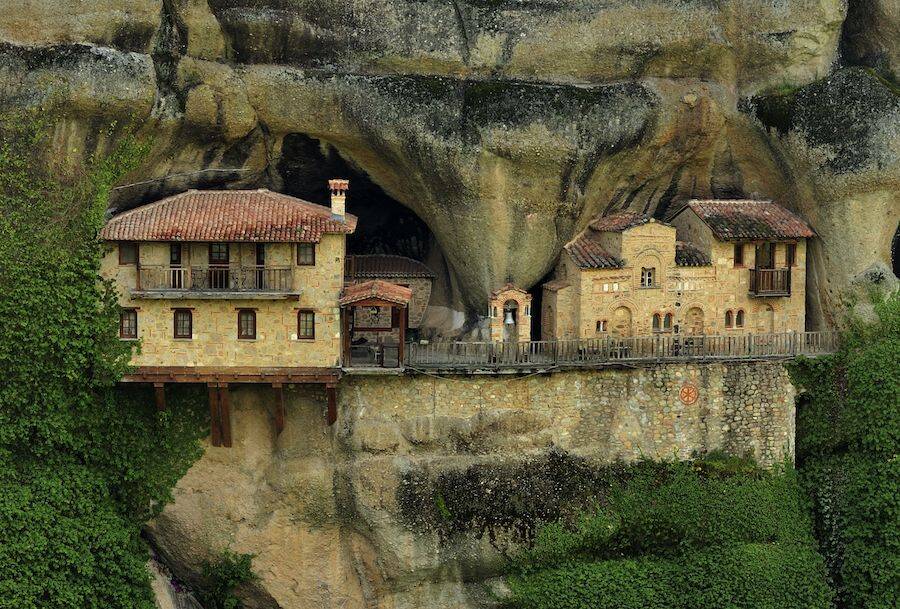 While visitors can enjoy scaling the outside of the rocks, inside the Meteora Monasteries themselves are a treasure trove of history. Many of these temples still boast intricate decorations depicting Biblical scenes and symbols.

There are also odd remnants of the monasteries past, such as the peculiar cabinet full of skulls from deceased monks at the Megalo Meteoro Monastery, also known as the "Metamorphosis Monastery."

However, despite its transformation from a haven for hermits to one of Greece's top tourist sites, the monasteries still serve their purpose as centers of worship as well as homes for the monks and nuns that still serve inside their walls high above ground.

These loft temples have been included and even inspired contemporary works in pop culture today. Movie buffs can peek the Meteora's hilly skyline in the films Indiana Jones and the James Bond flick, For Your Eyes Only.

The Monasteries of Meteora also served as inspiration for The Eyrie, the loft seat of the royal House Arryn in the hit series Game of Thrones.

Serving as a tourist attraction, functioning worship space, and all-around dreamy inspiration, the Monasteries of Meteora perfectly combine history with adventure in the Greek countryside.

Next, discover incredible images of Antilia, the world's most extravagant house. And then, learn about Giethoorn, the enchanting Dutch town without streets.