Meet Milton Hershey, The Chocolate Giant Who Built A Utopian Town For His Workers And Gave His Money Away To Orphans

Soon after Milton S. Hershey established the Hershey Chocolate Company in 1894, he began giving back by sharing profits with his employees and founded a school for orphans that still exists today. 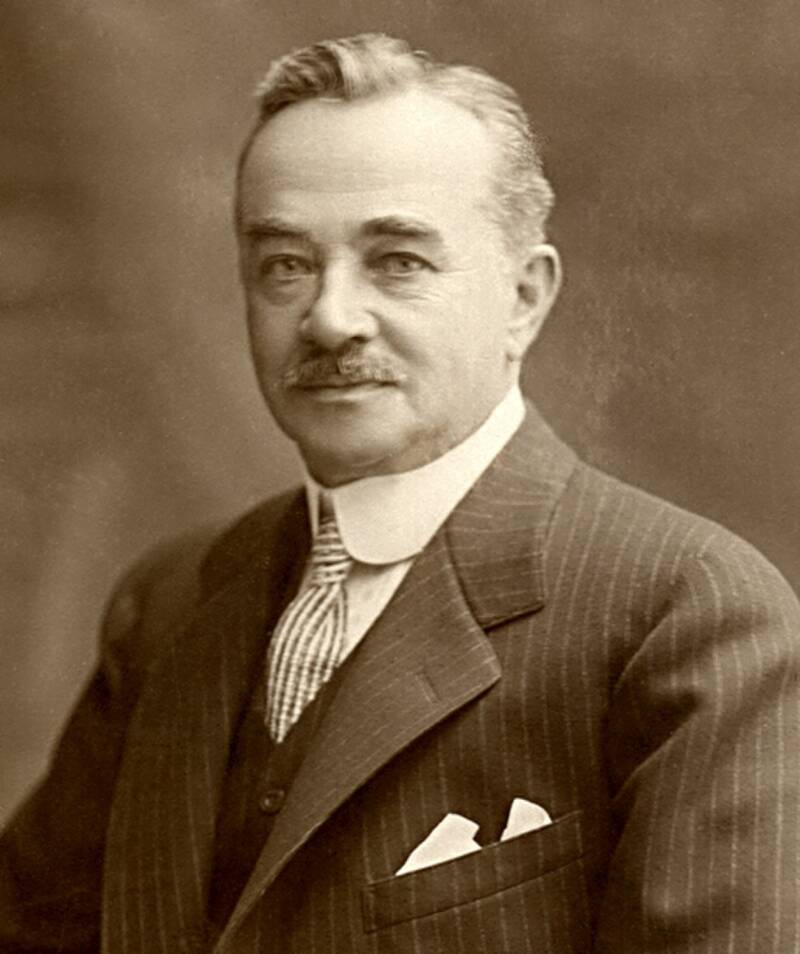 Hershey Community Archives/Public DomainMilton Hershey made millions before using his riches for charity.

Milton Hershey was an industrialist of the sweetest kind. Born surrounded by dairy farms in central Pennsylvania, he made a fortune by figuring out a way to mass produce milk chocolate at a time when such confections were a luxury good made in secret by the Germans and Swiss.

A confectioner’s apprentice in his youth, Hershey quickly realized he wanted to be his own boss. He started two short-lived candy companies in the late 19th century and didn’t waver as they shuttered. Finally, his third attempt spurred a thriving caramel company that he quickly sold off, determined to focus on chocolates. To this day, Hershey’s original factory still churns out billions of chocolate treats each year.

But Milton Hershey was also a progressive philanthropist, funding transportation projects, medical centers, schools, and charities. And because he and his wife could not have children, he founded a school for local orphans, which still operates today as the the Milton Hershey School and serves low income families in Pennsylvania. His astonishing legacy of giving back to his community has thus remained strong for more than a century.

Born on Sept. 13, 1857, in Derry Township, Pennsylvania, Milton Snavely Hershey grew up speaking Pennsylvania Dutch. His parents were Mennonite farmers of Swiss and German descent and instilled a discipline in Hershey that he would carry into adulthood. His sister was born in 1862 but tragically died four years later.

As an underage farmhand, Hershey received little to no schooling after the fourth grade. He was only 14 years old when he apprenticed for a German-English newspaper and found no joy in the profession. While his father was enraged when Hershey was fired, his mother suggested he try his hand as a confectioner. 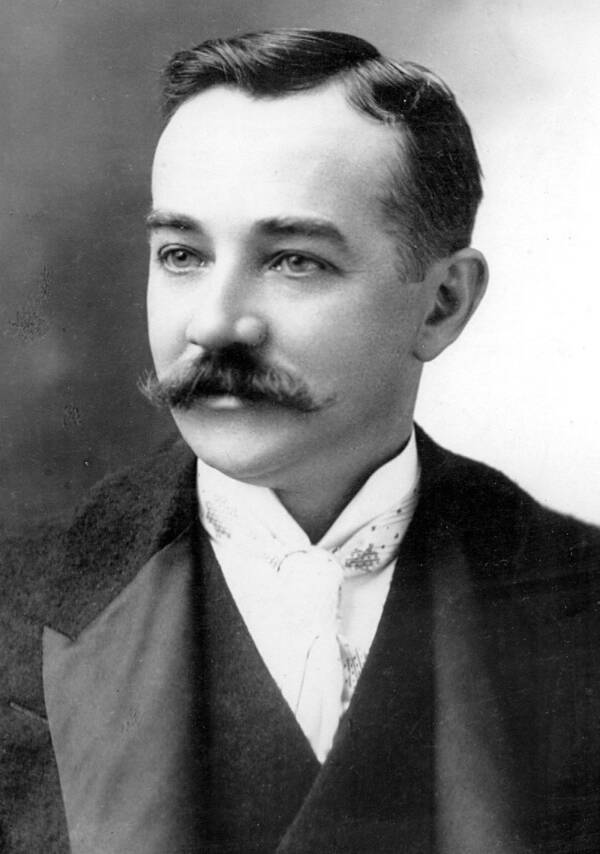 The Hershey StoryMilton Hershey at age 30 in 1887.

Hershey studied the making of candy and ice cream under Joseph Royer in Lancaster, Pennsylvania, for four years before he ventured out to start his own business. And in 1876, he moved to Philadelphia, just in time for America’s first World’s Fair. Hershey hoped the influx of tourists would lead his shop to succeed.

Despite financial aid from his mother and aunt, Milton Hershey’s first business venture was an irredeemable failure. It went bankrupt in 1882, but would only motivate Hershey to forge ahead. Advised by his father to move to Denver, Colorado, Hershey arrived to find the city in the middle of an economic depression. Rather than start a new business, he found work.

It was here that Hershey learned the value of making caramel with fresh milk. He set out yet again in 1883 to start his second confectionary in New York City. Although initially a success, the business was brought down by cash flow issues, and police seized his candy-making equipment after he defaulted on a debt.

By 1886, Milton Hershey was nearly bankrupt. And he used the last of his money to take the train back to Lancaster, where those who knew him deemed him a failure.

In Lancaster, a string of good fortune finally befell 29-year-old Milton Hershey. As Hershey tinkered with an old co-worker, his aunt, and his mother, he eventually created a new type of caramel that he called “Crystal A.” 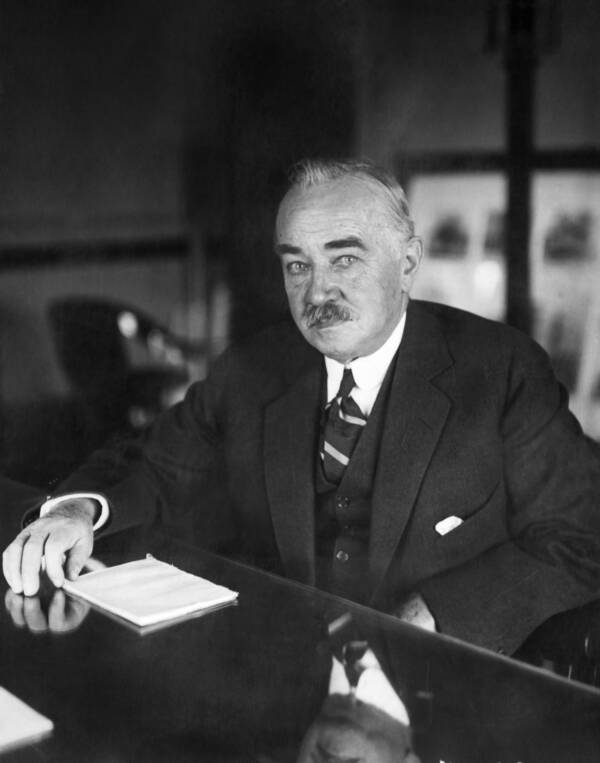 This caramel was made by mixing in fresh milk and Hershey went around selling it to anyone who would listen, promising that it would “melt in your mouth.” Soon, a British candy importer became so smitten with the product that he requested a wholesale order.

Hershey secured a loan from the Lancaster National Bank and purchased all the raw materials he needed to found the Lancaster Caramel Company. Opening in 1886, it sold caramels made with fresh milk to customers buying in bulk. It was such a success that Hershey employed 1,300 workers in two factories by the 1890s.

With liquid cash in his pockets for the first time ever, Milton Hershey treated himself to luxurious travel, visiting Mexico, Europe, the United Kingdom, and Egypt. He gambled in Monte Carlo and kissed the Blarney Stone in Ireland. And in 1898, he married Catherine Sweeney, an Irish American New Yorker who would profoundly shape his future philanthropy. 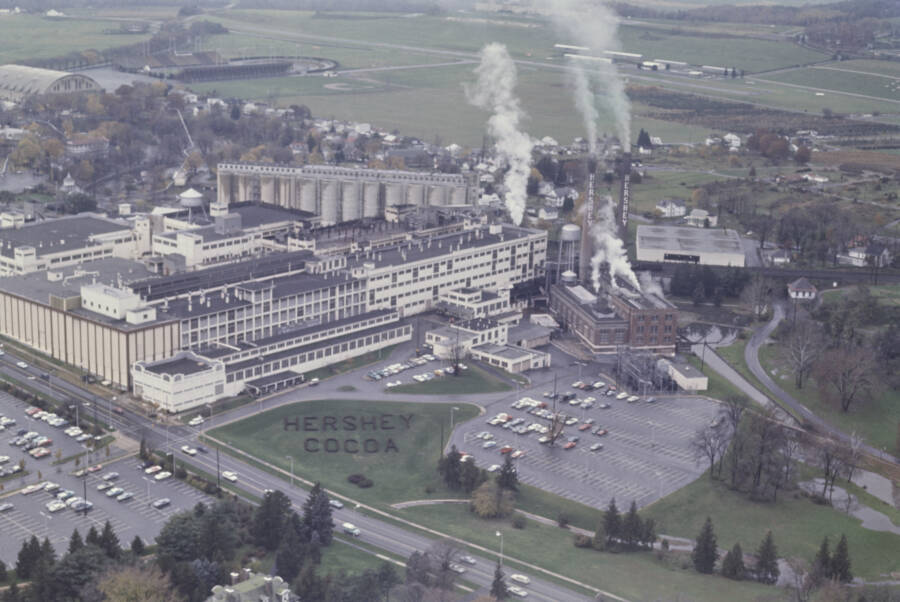 But he also made an auspicious trip to the World’s Columbian Exposition in Chicago in 1892, where he saw and bought chocolate making machinery from Germany. Until this point, Hershey had only ever used chocolate as decorative coatings on his caramels. But now, he was pondering a serious transition.

And in 1900, Milton Hershey sold the Lancaster Caramel Company for $1 million, forfeiting the rights to “Crystal A” and all his caramel factories. But he shrewdly retained the rights for his chocolate recipes.

With the money from the sale, he founded the Hershey Chocolate Company and bought land in Derry Township, where he knew dairy farms were in strong supply. He broke ground on his new factory in 1903. Within two years of the factory’s completion in 1905, the Hershey Kiss hit the market.

The Lasting Legacy Of A Generous Philanthropist

With money to spare, Milton Hershey and his wife began pondering how they should spend it, since they could have no children who might inherit their wealth. So in 1909, they opened the Hershey Industrial School for orphaned boys in 1909, which still operates today as the co-educational Milton Hershey School. 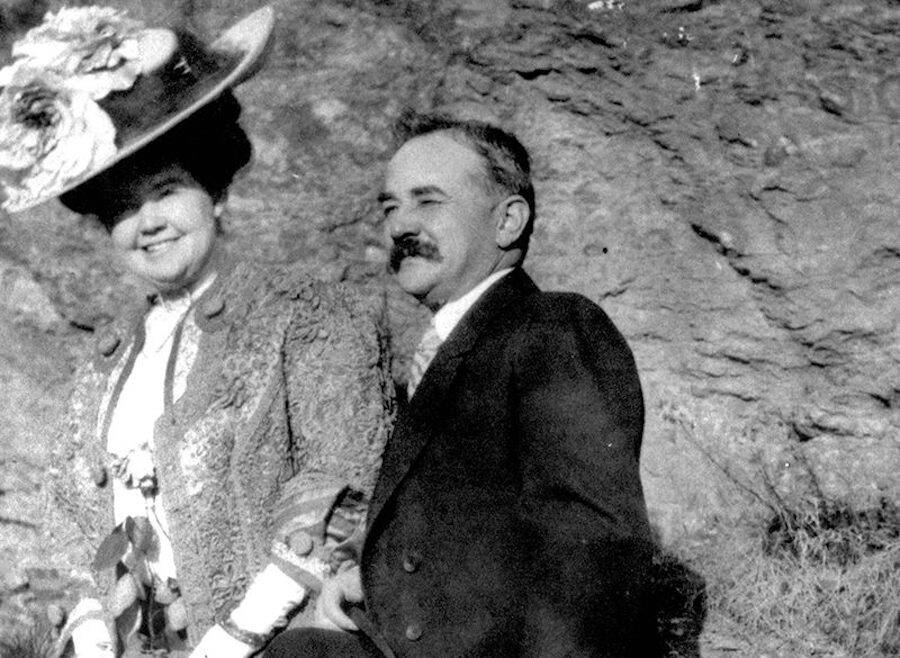 Milton Hershey SchoolCatherine and Milton Hershey started a school for orphan boys because they couldn’t have children themselves.

While the Hersheys narrowly avoided sinking aboard the Titanic in 1912 after they decided at the last minute not to board, Catherine died of pneumonia in 1915. Milton Hershey buried himself in work and was now producing the first nationally marketed chocolate in America and over 100 different varieties.

With business booming, he began pondering building his farmland into a town. Intended to house workers and staff, the town of Hershey, Pennsylvania was designed by engineer Henry N. Herr.

Herr turned the Derry Township land into a booming company town with a bank, hotel, public school, churches, parks, golf courses, and a zoo. Herr even implemented a trolley system that led into Hershey from nearby towns. Today, Hershey has a population of 14,000.

After three years as a widower, Milton Hershey transferred $60 million of his company shares to the Hershey Trust that funded the industrial school he had founded with his late wife. He launched construction projects in his town during the Great Depression to keep his residents afloat, and never stopped giving.

He supported America’s war efforts against the Nazis in World War II by supplying the armed forces with chocolate bars that he formulated specially not to melt in the hand. Hershey was too old to fight but knew financial power could be wielded for good.

From the Milton Hershey School that annually educated 1,900 students today to the M.S. Hershey Foundation which supports cultural activities in Hershey, the philanthropist died a generous millionaire on Oct. 13, 1945. While he himself is long gone, his work proliferates throughout the globe.

From Twizzlers and Reese’s to Cadbury and Almond Joys, untold millions of children have cherished the man responsible without realizing what he endured to get there.

After learning about Milton Hershey, read about the history of M&M’s. Then, learn about 21 delicious chocolate facts that will blow your mind.