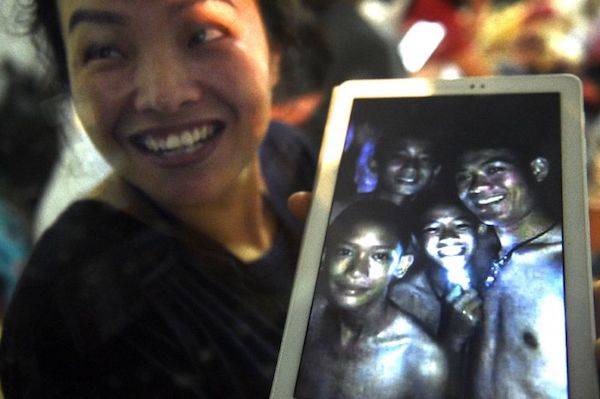 AFP Photo/LILLIAN SUWANRUMPHAA family member shows the latest picture of the missing boys taken by rescue divers inside the cave.

Early morning on July 2, British divers found a youth soccer team and their 25-year-old coach alive inside a cave in northern Thailand after they went missing on June 23.

The 12 Thai boys, who are between 11 and 16 years-old, and their coach, had been exploring the cave network called Tham Luang Nang Non when a heavy rainstorm flooded the area trapped them inside of it.

The group was provided with food and a doctor, and none of them appeared to need urgent medical attention.

Family and community members were overcome with joy at the discovery. But the initial relief has morphed into concern about how exactly to rescue the 13 people now that they’ve been located.

The operation won’t be an easy one. According to the British Cave Rescue Council, the cramped darkened chamber that the boys have been residing in for 10 days is estimated to be around 1.2 miles in and over half-mile down.

Only accessible through a narrow channel that’s still flooded with water, the stranded group must wait for rescue teams to make a decision on what the best path to pursue is in getting them out.

When it comes to extracting the boys, Thai authorities said they are committed to “100 percent safety.”

“We don’t have to rush. We are trying to take care of them and make them strong. Then the boys will come out to see you guys,” Thai Navy Seal Chief Adm. Aphakorn Yoo-kongkaew told the families at a news conference on July 3.

Supplying them in place has been the current method. It is seemingly the safest option, as teams have been providing the trapped group with high-protein liquid food while they explore the cave’s infrastructure.

However, it could take weeks or even months. And attempts to pump water from the cave or find a natural opening in the roof has been unsuccessful thus far.

Part of this strategy may include waiting until the rainy season ends in October to begin the rescue operation. But expected heavy rain could force the rescuers to act sooner if water levels rise again.

In the meantime, rescuers have been searching the mountainside for possible entry points below. They have received drilling equipment, though creating a hole large enough for the boys to escape through could be a complicated and time-consuming procedure as well.

Another option is to have the group dive out of the cave, which would be the quickest. The Royal Thai Navy said authorities would begin teaching the boys how to scuba dive. However, the option comes with severe risks.

Though water levels have dropped since the initial flooding, the conditions still leave many technical challenges at play. 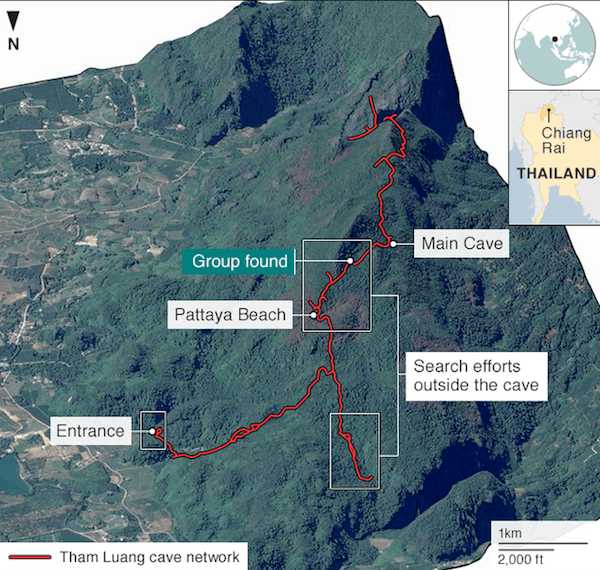 Much of the six-mile long Tham Luang Nang Non cave, located under a mountainside in the province Chiang Rai, is made up of narrow passageways difficult to navigate. The ground is rocky, the water is muddy, and elevation levels rise and fall along the way.

“It won’t be anything like diving that most people recognize,” Pat Moret, a rescue consultant, told CNN. “It will be diving in what is effectively muddy water, possibly fast-flowing, with no sense of direction. You can’t tell what’s up, down, sideways.”

On top of all the complications, some of the children can’t even swim.

To make the process potentially faster and safer, dive lines can be installed, extra oxygen tanks can be left along the way, and glow sticks can be placed throughout the path to add light.

Interior Minister Anupong Paojinda conceded that if something were to go wrong, it could be “life-threatening.”

As limited as they are, all feasible options are being taken into consideration.

“We worked so hard to find them and we will not lose them,” said Chiang Rai provincial Gov. Narongsak Osatanakorn.

Next take a look at these 20 photos inside earth’s largest cave. Then read about the missing boy who was found alive inside a sewer system in Los Angeles.