The Truth Behind Those Rumors About Mr. Rogers’ Tattoos

Mr. Rogers always wore long-sleeve sweaters, which made some people convinced he was hiding tattoos underneath them. 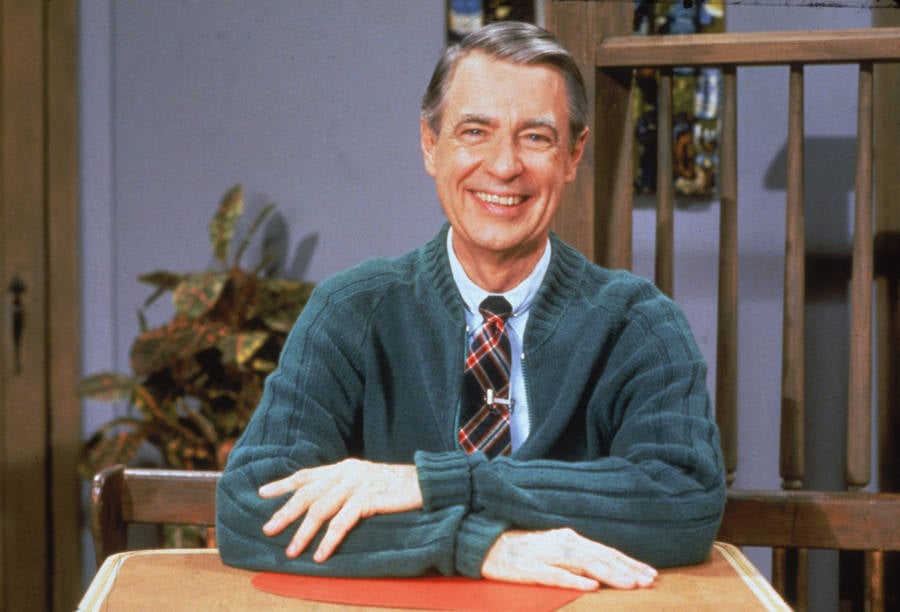 If urban legend is to be believed, Mr. Rogers had a bunch of secret tattoos on his arms — and he hid them extremely well with his signature long-sleeve cardigan sweaters.

This story often goes hand-in-hand with the rumor that the host of the children’s TV show Mister Rogers’ Neighborhood was once a badass military sniper. Many people assume that if Mr. Rogers was indeed tattooed, he surely must have gotten his ink while he was a soldier. Some have even suggested these tattoos commemorated his “kills” in battle.

But did Mr. Rogers have tattoos in the first place? Did he really serve in the military? And how on earth did these stories emerge?

Did Mr. Rogers Have Tattoos? 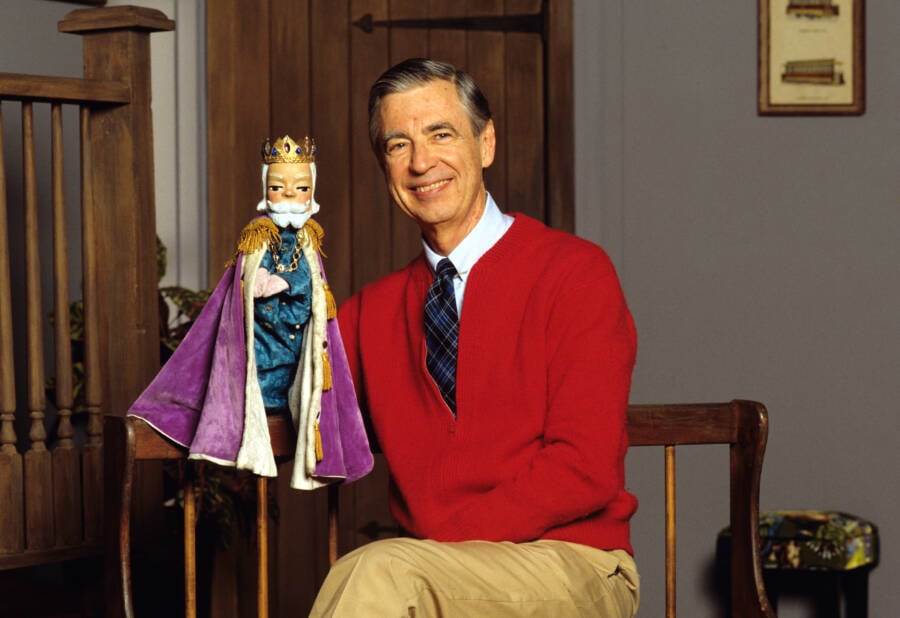 Getty ImagesMr. Rogers was known for wearing long-sleeve sweaters on his show.

To put it simply, the rumors about Mr. Rogers’ tattoos are not true at all. The man had zero ink on his arms — or anywhere else on his body.

It’s difficult to pinpoint when people started whispering about Mr. Rogers’ supposed tattoos — and his alleged military background — but the rumors trace back to sometime before the mid-1990s.

While the myth seemed to fizzle out in the decade before Mr. Rogers’ death in 2003, the rumor mill began turning again shortly after he passed away.

This fake chain email, which circulated in 2003, has been linked to the revival of the tall tale:

“There was this wimpy little man (who just passed away) on PBS, gentle and quiet. Mr. Rogers is another of those you would least suspect of being anything but what he portrayed. But Mr. Rogers was a U.S. Navy Seal, combat-proven in Vietnam with over twenty-five confirmed kills to his name. He wore a long-sleeve sweater to cover the many tattoos on his forearm and biceps. (He was) a master in small arms and hand-to-hand combat, able to disarm or kill in a heartbeat. He hid that away and won our hearts with his quiet wit and charm.”

While this email offered no proof of its jaw-dropping claims, the false story took on such a life of its own that the U.S. Navy issued a formal correction:

“Firstly, Mr. Rogers was born in 1928 and thus at the time of the U.S. involvement in the Vietnam conflict was too old to enlist in the U.S. Navy.”

“Secondly, he had no time to do so. Right after finishing high school, Mr. Rogers went straight into college, and after graduating college directly into TV work.”

Interestingly enough, the U.S. Navy even addressed the tattoo rumor: “He was purposely choosing long-sleeve clothes to keep his formality as well as authority not only to children but to their parents as well.”

While other false rumors have circulated that Mr. Rogers served in other branches of the military — such as the Marine Corps — the TV icon did not serve in the military at all.

He had no “kills” to commemorate — and thus no “kill record” to ink on his skin or anywhere else.

How Did The Myth Of Mr. Rogers’ Tattoos Start?

Essentially, rumors about Mr. Rogers’ tattoos stem from the fact that he always wore long-sleeve sweaters on his show. Based on that alone, people started claiming that he did so in order to cover up secret tattoos.

But the real reasons why he swore by his sweaters are just as wholesome as the songs he sang on Mister Rogers’ Neighborhood.

First of all, his beloved mother Nancy knitted all his famous cardigans by hand. He thought very highly of his mother, so he wore the sweaters in honor of her. 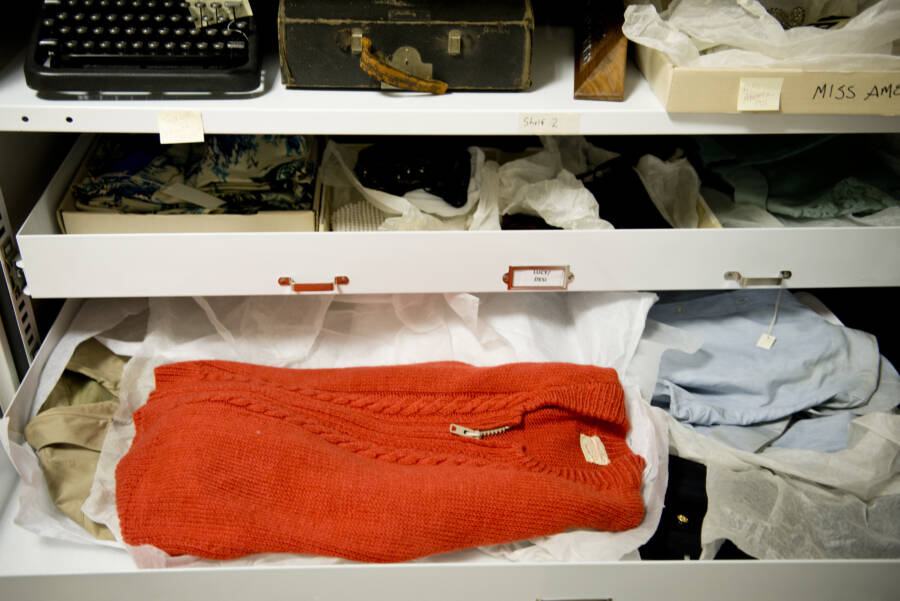 Getty ImagesOne of Mr. Rogers’ sweaters on display at the Smithsonian’s American History Museum in 2012.

Secondly, the sweaters were part of the persona that Mr. Rogers created for his program. This stylistic choice allowed him to maintain formality with children. Although he was friendly with them, he also wanted to establish a relationship with them as an authority figure — similar to a teacher.

And finally, the sweaters were simply comfortable. While Mr. Rogers’ formal persona was important, he certainly didn’t want to feel uncomfortable in a stiff jacket while interacting with kids. Who would?

Why Do The Rumors Persist? 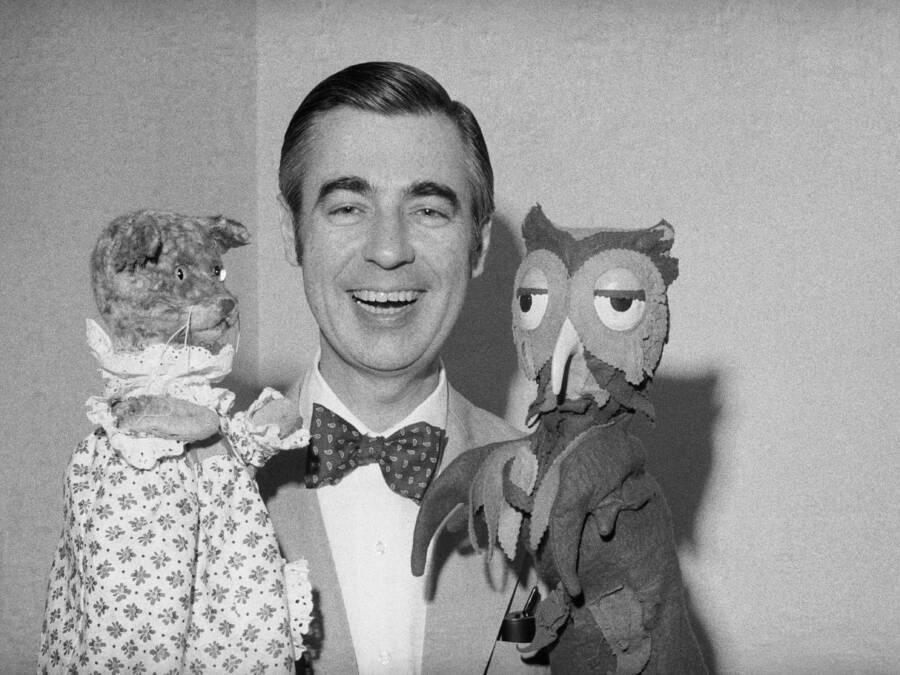 Getty ImagesMr. Rogers with his puppets.

The untrue rumors about Mr. Rogers’ tattoos and military service do not fit with the man’s gentle, peaceful personality at all. Some experts think that’s precisely the reason why he’s always been a target for these urban legends.

“Mr. Rogers, by all accounts, seems like a very mild-mannered, Puritan-esque character,” said folklore expert Trevor J. Blank, in an interview with The History Channel. “Him having a very macho back story or being a ruthless killer is kind of titillating; it runs counter to what you’re presented as true in your day-to-day experience.”

According to Blank, the very definition of an urban legend is a fictional story that has some type of believable component. Typically, these stories seem somewhat credible because they supposedly happen to a person we know or are familiar with. But these people — like Mr. Rogers in this case — are also far enough away from us that we can’t immediately verify the truth.

“He’s an individual to whom we trust our children,” said Blank. “He taught kids how take care of their bodies, associate with their community, how to relate to neighbors and strangers.”

When you think about it, Mr. Rogers is truly the perfect target for urban legends — especially ones that challenge his squeaky-clean image like tattoos of a “kill record.”

For what it’s worth, Neighborhood stage manager Nick Tallo had quite a chuckle over these rumors. As Tallo put it: “He didn’t know how to use a screwdriver, let alone kill a bunch of people.”

The Truth About Mr. Rogers

After graduation, he immediately embarked on a broadcasting career. And from 1968 to 2001, he was able to fulfill his mission of educating and enlightening children on Mister Rogers’ Neighborhood.

Rogers never smoked, drank, or ate the flesh of animals. He was an ordained Presbyterian minister who always preached inclusion and tolerance by saying, “God loves you just the way you are.”

It’s no wonder why he was — and still is — admired by millions of Americans who grew up with him and his timeless words of wisdom.

A few months before his death, Mr. Rogers recorded a message for his adult fans who watched his show every day:

“I would like to tell you what I often told you when you were much younger. I like you just the way you are. And what’s more, I’m so grateful to you for helping the children in your life to know that you’ll do everything you can to keep them safe. And to help them express their feelings in ways that will bring healing in many different neighborhoods. It’s such a good feeling to know that we’re lifelong friends.”

Now that’s the Mr. Rogers we all know and love.

After this look at the myth of Mr. Rogers’ tattoos, read more about Mr. Rogers’ incredible life. Then discover the full story of Bob Ross, the man behind the happy little trees.