Before this discovery, only the bones of cave bears had been found. 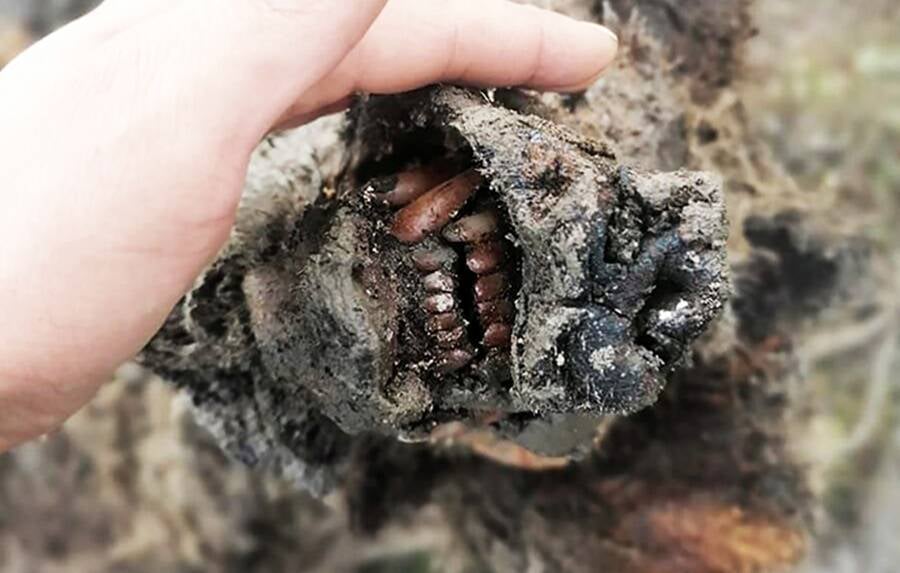 NEFUThe wholly-intact teeth of a prehistoric cave bear whose species went extinct about 20,000 years ago.

The Siberian permafrost is known as a treasure trove of prehistoric artifacts where Ice Age animals lie perfectly frozen in time. And one such remarkable specimen was just discovered: the mummified carcass of a 39,500-year-old cave bear.

“This is the first and only find of its kind — a whole bear carcass with soft tissues,” said Lena Grigorieva, a molecular paleontologist at the North-Eastern Federal University (NEFU) in Yakutsk. “It is completely preserved, with all internal organs in place.”

Grigorieva added that though this wasn’t the first time researchers have come across a prehistoric cave bear, it is the first time they have found one that was so completely intact. A previous specimen featured only its skulls and bones.

“This find is of great importance for the whole world,” she said exuberantly. 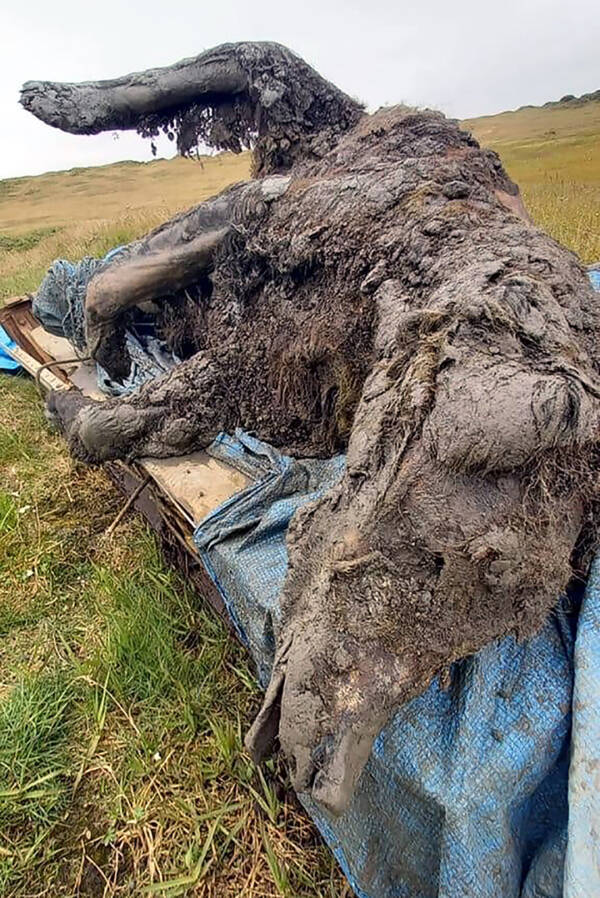 NEFUThe specimen is believed to have lived during the Pleistocene, which lasted from 2.9 million and 11,700 years ago.

Indeed, this cave bear is so well preserved that even its nose, fur, and teeth are still completely intact.

The mummified cave bear is of the extinct species Ursus spelaeus, which lived in Eurasia during the Middle and Late Pleistocene period. Researchers have yet to conduct a full examination on the specimen, but because cave bears of this kind lived sometime during the Karaginsky interglacial period, it would be a fair guess to assume that this specimen lived sometime between 39,500 and 22,000 years ago.

Ursus spelaeus’s population began to diminish about 15,000 years ago before finally becoming extinct. Unlike many of their modern brethren, these prehistoric bears most likely weren’t carnivores, though they may have been cannibalistic on rare occasions in order to survive.

But make no mistake; despite its primarily vegetarian diet, U. spelaeus was a magnificent beast measuring up to 11.5 feet tall when standing on hind legs. They weighed somewhere between 1,100 and 3,300 pounds. By comparison, the heaviest polar bear — considered to be the largest species of bear currently living on the planet — weighed about 2,209 pounds. 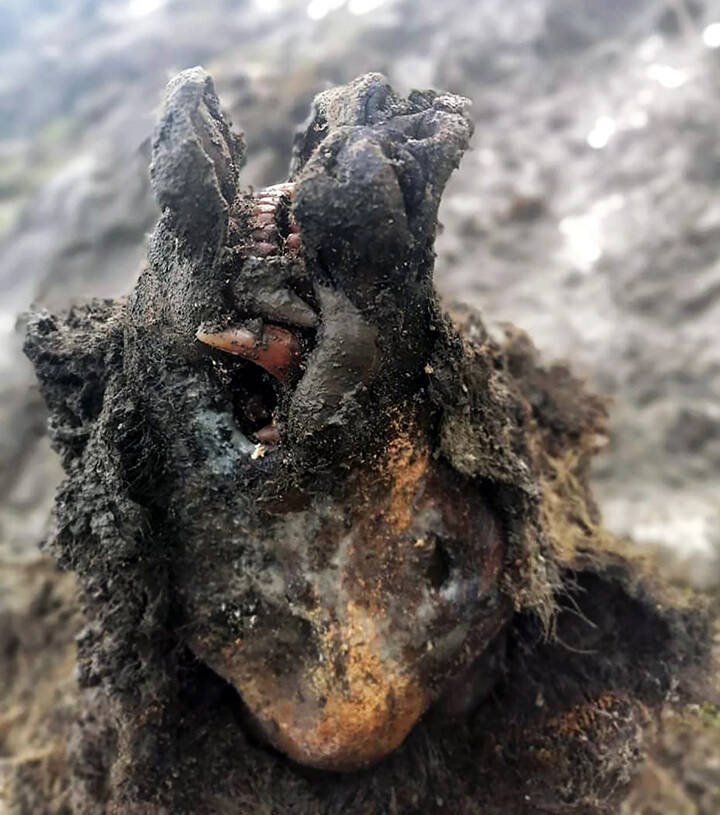 NEFUThough beastly creatures, cave bears feasted mainly on vegetation — and occasionally each other.

This groundbreaking discovery was quickly coupled with another startling find. On the nearby mainland of Yakutia, researchers were alerted to the remains of an Ice Age cave bear cub. This specimen has yet to be studied properly, but it is also suspected to have lived around the same time period as the adult.

“It is necessary to carry out radiocarbon analysis to determine the precise age of the bear,” said senior researcher Maxim Cheprasov from the Mammoth Museum laboratory in Yakutsk.

Researchers are now planning to collaborate with international colleagues to carry out a study on both specimens, something of a large scale research project in the same vein as the famous Malolyakhovsky mammoth, Cheprasov said.

Cheprasov was referring to a 2019 study which examined the cells extracted from the remains of a well-preserved 43,000-year-old mammoth carcass found on the island of Maly Lyakhov, another one of the Lyakhovsky Islands.

“We will have to study the carcass of a bear using all modern scientific research methods — molecular genetic, cellular, microbiological and others,” he explained. 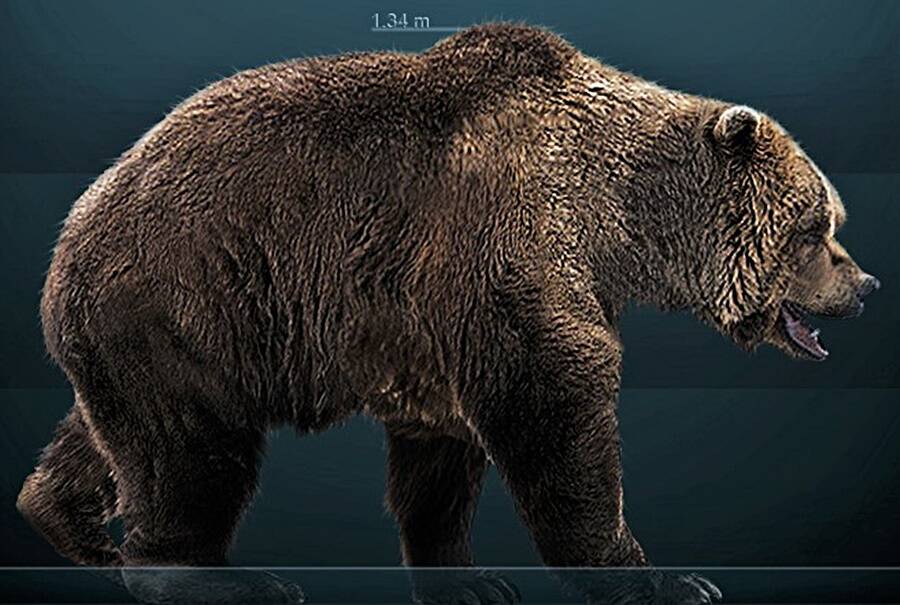 This prehistoric cave bear isn’t the only preserved specimen to come out of Siberia recently. Among the most exciting findings this year is the skeleton of a woolly mammoth, which had ligaments still attached to its bones. Like the cave bear, this specimen was found accidentally by reindeer herders.

But perhaps even more startling was the discovery of an Ice Age wolf-dog puppy hybrid, which had the remains of a rare woolly rhino still in its stomach.

In recent years, researchers have also been stunned by the carcass of an 18,000-year-old mummified wolf-dog, which was uncovered beneath the permafrost also near Yakutsk. The wolf-dog, who researchers affectionately named Dogor, is among the most well-preserved prehistoric canine specimens ever found in the region with its nose, fur, and teeth all remarkably intact.

Next, read about the mummified woman found buried in Siberia who was wearing foal-skin stockings and a copper cross. Then, learn about the 46,000-year-old horned lark bird that was also found in the Siberian permafrost with its feathers and talons intact.