Led by Abba Kovner, the Nakam group of Jewish vigilantes hatched an audacious plan to kill 6 million Germans as revenge for the Holocaust. 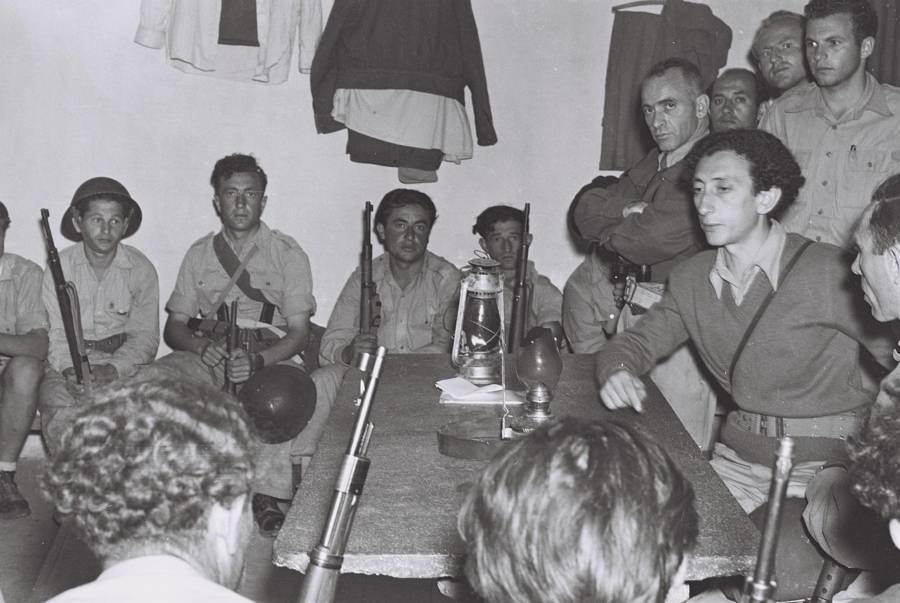 For many Jews, the end of World War II was not the end of their war with Nazi Germany. Many felt that the upcoming trial of some prominent Nazis wasn’t enough to account for the crimes of the Holocaust.

The Nuremberg trials could not possibly hold accountable all Germans complicit in the brutality of the Holocaust. Nor could the Allies’ makeshift POW camps contain them. Many Nazis were simply sent home.

Soon, Jewish vigilante groups formed in order to enact their own brand of justice. Nazis were found, taken into the woods, and shot. Others were hanged in their garages or were found dead in roadside ditches from apparent hit-and-run accidents.

But for one man named Abba Kovner, this wasn’t enough. He believed in an Old Testament-style of justice. Just as the Nazis had killed 6 million Jews, then so too should 6 million Germans suffer the same fate. An eye for an eye.

So it was that Kovner formed a militia known as Nakam (or Nokmim, often translated as “Avengers”).

It was imperative to form this group,” said Nakam member Yehuda Maimon in 2016. “Heaven forbid if after the war we had just gone back to the routine without thinking about paying those bastards back. It would have been awful not to respond to those animals.”

Nakam’s idea, simply known as Plan A, was to poison the water supply of five German cities: Nuremberg, Weimar, Hamburg, Frankfurt, and Munich. The fallback was Plan B, which was a far less audacious plan to specifically poison Nazi prisoners of war.

By mid-1945, Kovner had about 50 recruits to help implement Plan A. Disguised as engineers and workers, the Nakam Avengers infiltrated the waterworks of each target city. There, they studied how the water supply was pumped into German homes.

In September 1945, Abba Kovner sailed to Palestine to obtain poison, leaving his future wife, Vitka Kempner, in charge of the Nakam Avengers. Kovner also wanted the blessing of Palestine’s Jewish leadership. The most receptive was Chaim Weizmann, the President of the World Zionist Organization.

Weizmann, a renowned chemist, was one of two future Israeli presidents Kovner would go through to get the poison. The second was Ephraim Katzir, who worked for Weizmann. At Weizmann’s behest, Katzir gave Kovner a poison that was lethal in milligrams. Weizmann had approved the use of poison for Nazi prisoners, but was apparently unaware of the plan to kill six million Germans.

On Dec. 14, 1945, Abba Kovner, armed with two canisters of poison, sailed from Alexandria, Egypt to Toulon, France. As Toulon came into view, the British announced the false name he was traveling under over the loudspeaker. Kovner was suspicious and emptied one of the canisters overboard. He gave his escort the second canister and a note for his wife. Kovner was arrested, most likely due to Jewish leaders who were opposed to his plot and had contacted the authorities. Nevertheless, the note made it to his wife, directing her to “proceed with Plan B.”

Under the new leadership of Joseph Harmatz, the new target was Stalag 13-D, an Allied POW camp in Nuremberg. There, the Nakam Avengers intended to kill 12,000 Nazi prisoners.

Rather than poisoning the Nazis’ water supply, the Avengers targeted their bread rations. The Avengers had an inside man in the bakery that supplied Stalag 13-D with their daily bread. Soon a large quantity of arsenic was smuggled into Nuremberg and was stored beneath the bakery’s floorboards.

In the early hours of April 13, 1946, 3,000 loaves were coated in a mixture of glue and arsenic. By the evening, thousands of former Nazis were hospitalized.

The New York Times reported that 2,238 Nazis were sick. However, it’s not clear how many Nazis actually died or whether any died at all. Recently declassified documents state that not one person died, which is odd considering that the Nakam Avengers used enough arsenic to kill tens of thousands. However, the Nakam Avengers may have spread the poison too thin.

Never again did Nakam attempt such a massive revenge operation, with many of its members instead focusing their efforts on the formation and defense of Israel, in which Abba Kovner played a large role.

Ultimately, neither Kovner nor any other Nakam member was charged with any crimes in connection with these plots. Decades later, German prosecutors investigated the matter but wouldn’t file charges due to “extraordinary circumstances.”

After this look at Nakam and Abba Kovner, see some of the most powerful Holocaust photos and World War 2 photos ever taken.