The White House Press Secretary, however, has said that the memo is "not a White House document" and "100% not true." 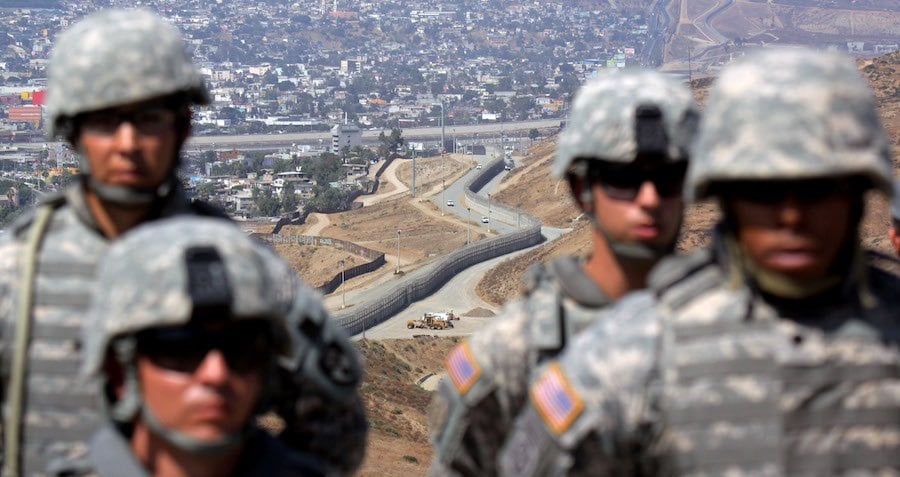 The Associated Press is reporting that they have received a copy of a draft memo exposing the Trump administration’s plan to use up to 100,000 National Guard soldiers in large-scale deportation raids inside the U.S., but White House officials deny the allegations.

U.S. Homeland Security Secretary John Kelly, a retired four-star Marine general, appears to have written the memo, which the AP has since posted to DocumentCloud.org. It calls for immigration enforcement to become militarized in 11 states: California, Arizona, New Mexico, and Texas, which all border Mexico, as well as Oregon, Nevada, Utah, Colorado, Oklahoma, Arkansas, and Louisiana.

According to the memo, which the AP sources to the Department of Homeland Security (DHS), the administration plans to have National Guard soldiers “perform the functions of an immigration officer in relation to the investigation, apprehension and detention of aliens in the United States.”

In short, American troops would be searching and raiding family homes across the continental U.S. in the name of identifying and arresting any unauthorized immigrants.

White House Press Secretary Sean Spicer told reporters on Air Force One these plans did not exist, saying that the memo was “not a White House document,” according to the AP.

“That is 100 percent not true. It is false,” Spicer said, according to the White House press pool.

Sean Spicer tells press pool that AP report on National Guard being used to round up people in the U.S. illegally is "100% not true." pic.twitter.com/rHh7W9XZc5

While Spicer went as far as calling the AP’s report “irresponsible,” the press wire service had asked both the White House and the DHS for a comment on Thursday and Friday. Neither responded.

Meanwhile, according to the AP, DHS staffers said that they discussed the proposal as recently as last Friday.

The AP reached out to the spokespeople for the governors of the 11 states. Nine declined to comment or said it was too early to talk about taking part. Texas did not respond. Arkansas Gov. Asa Hutchinson, however, said that while federal officials had not been in contact regarding the proposal, “I would have concerns about the utilization of National Guard resources for immigration enforcement. I believe it would be too much of a strain on our National Guard personnel.”

Next, read up on the incident in which a Trump adviser cited a fake terrorist attack in order to justify the administration’s controversial refugee ban, before finding out how Trump learned some of his political tactics in the WWE.