23 Child Labor Photographs That Changed The Face Of American Industry 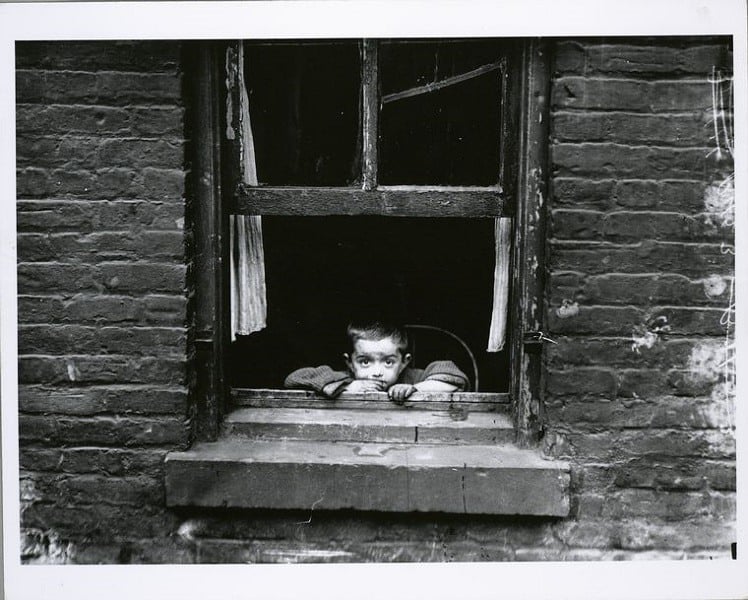 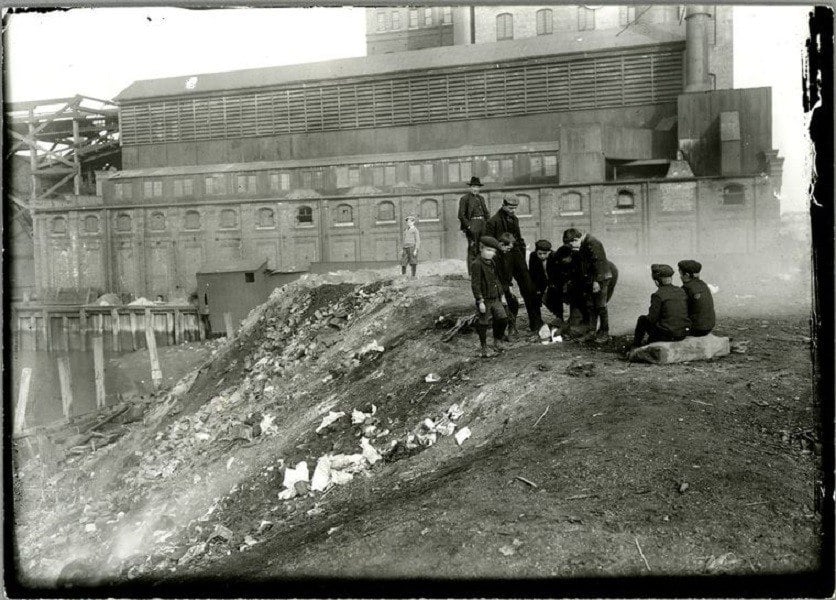 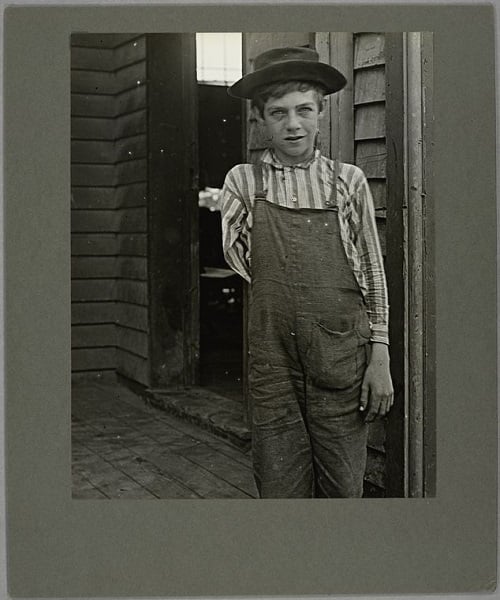 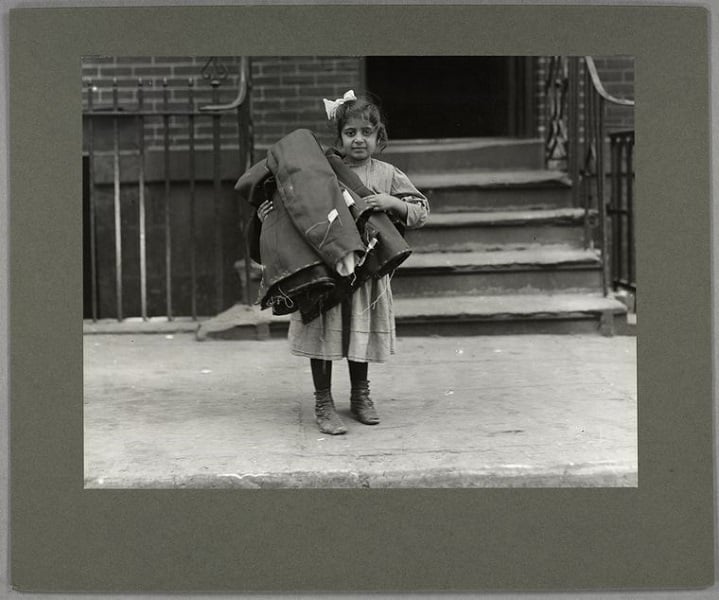 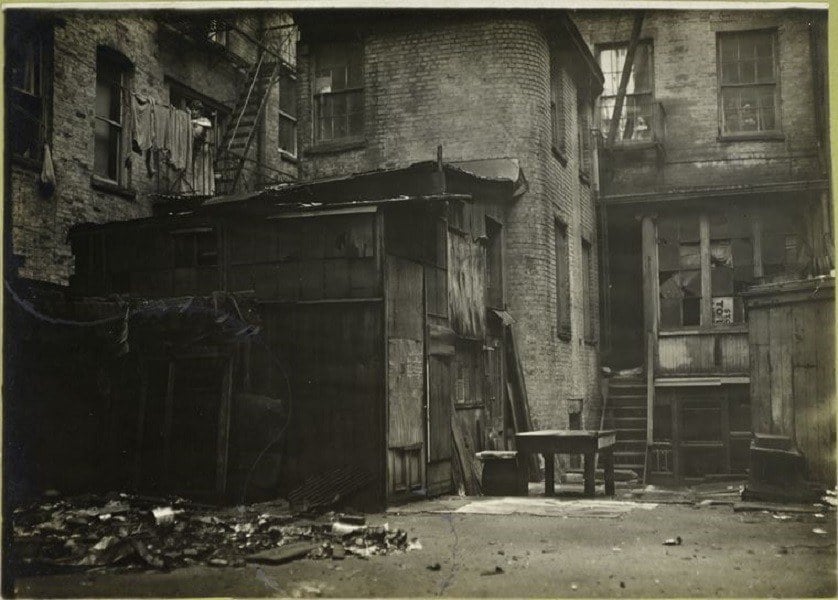 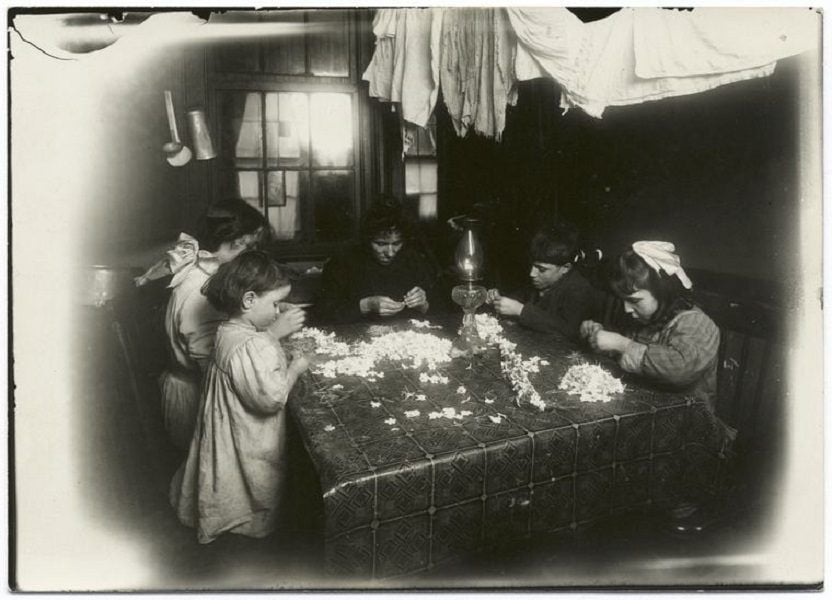 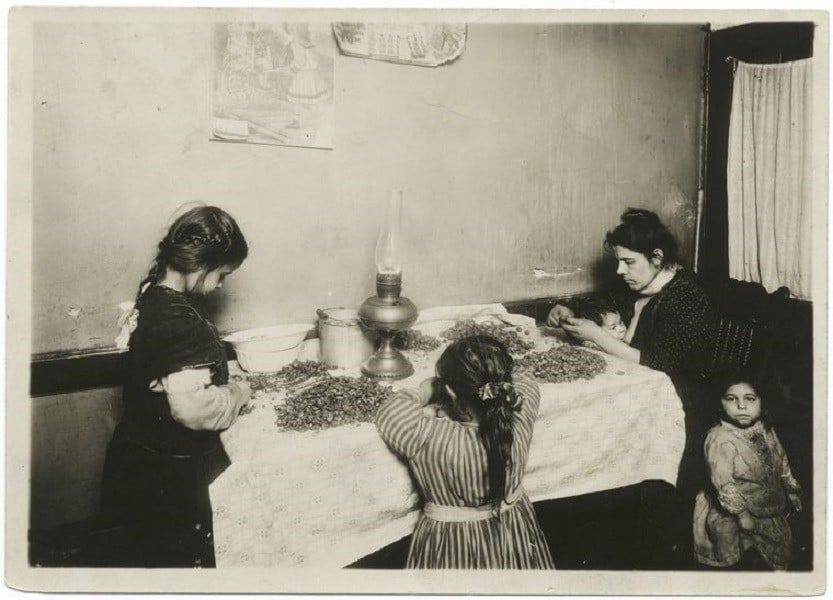 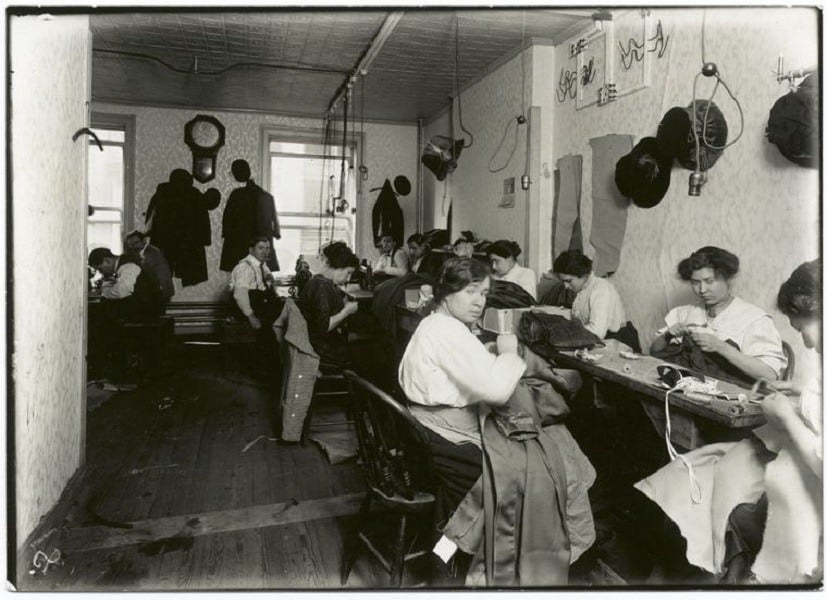 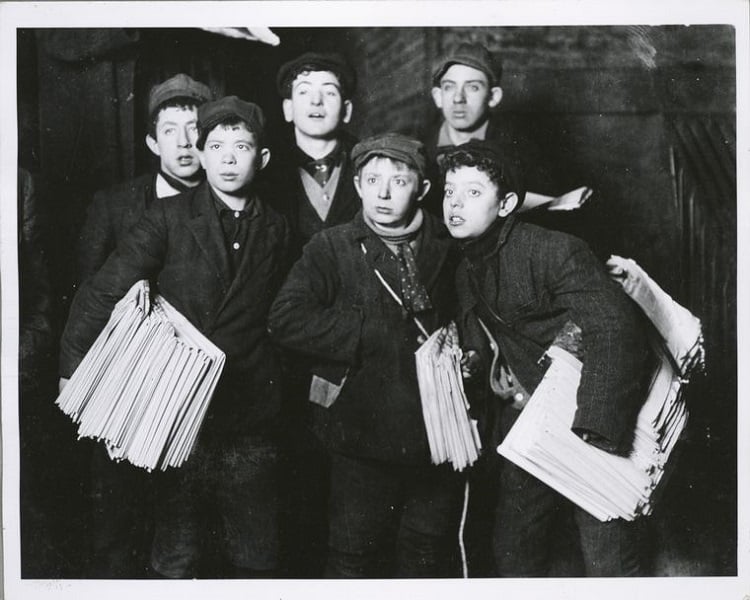 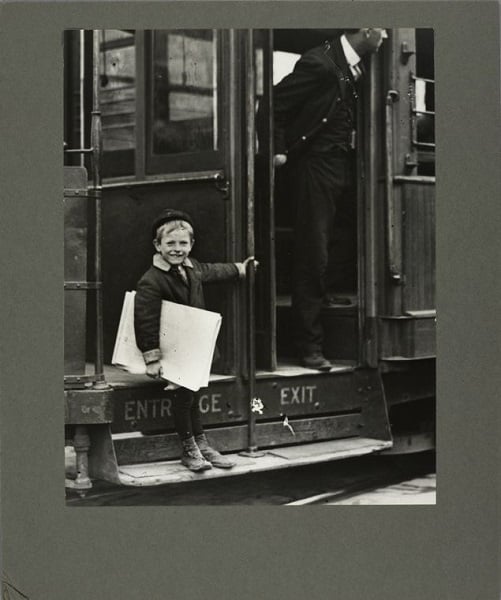 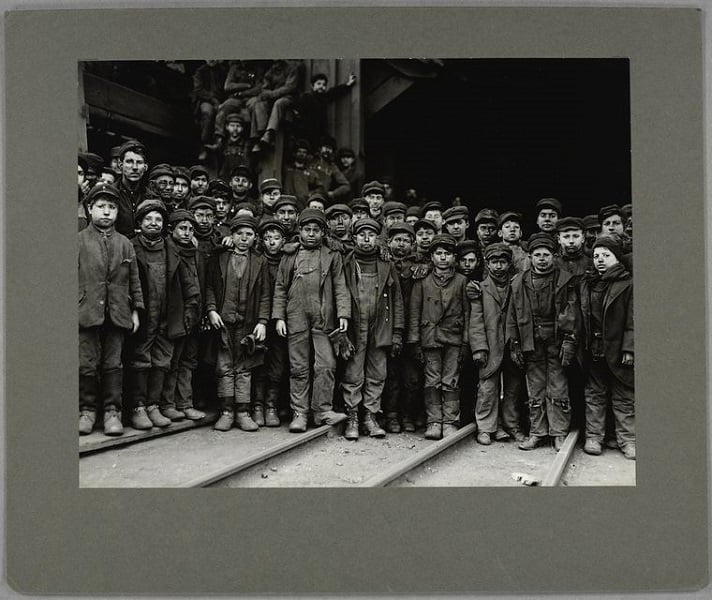 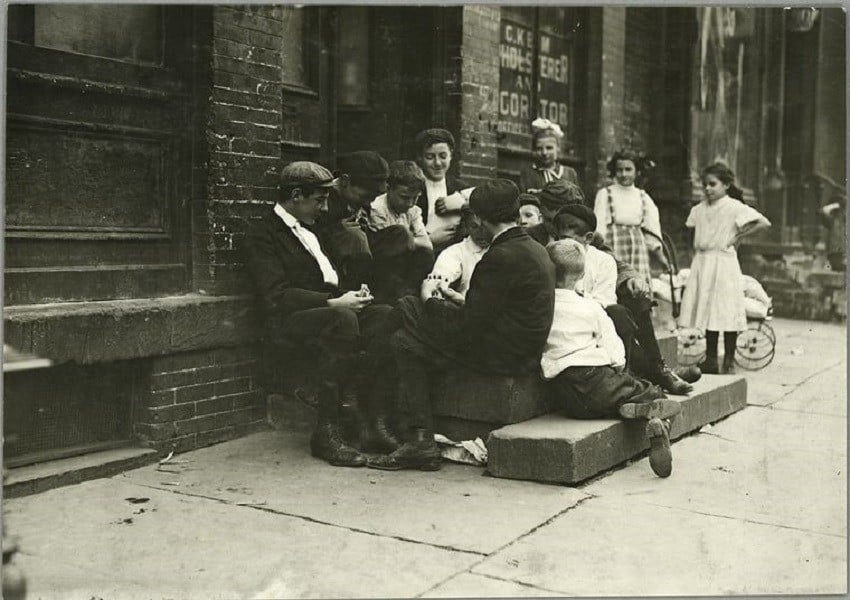 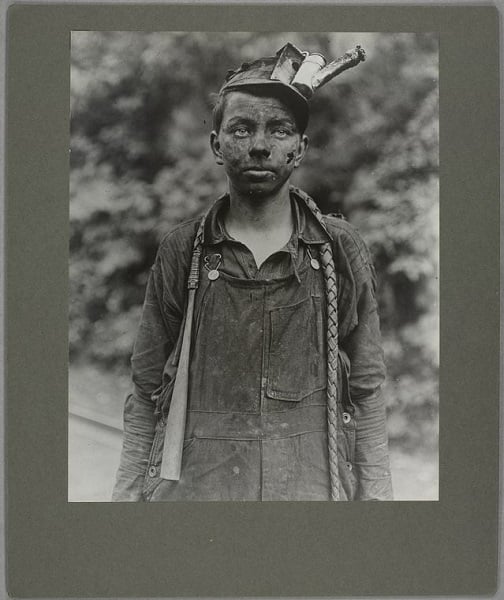 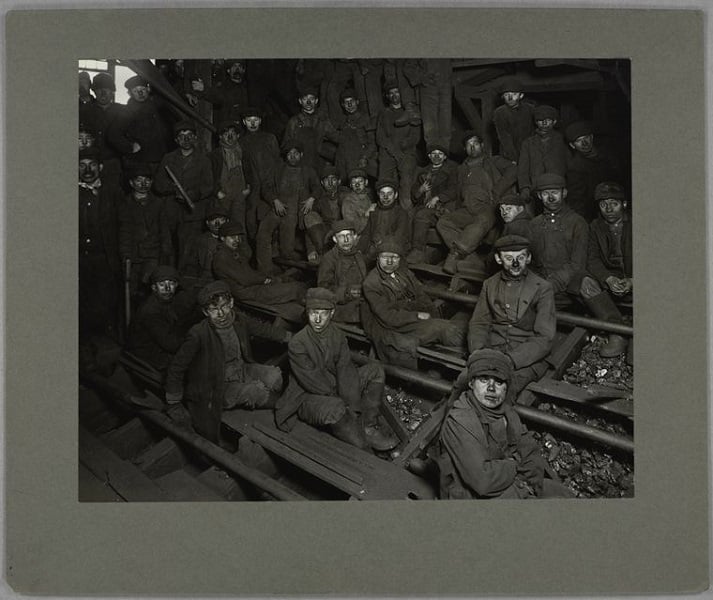 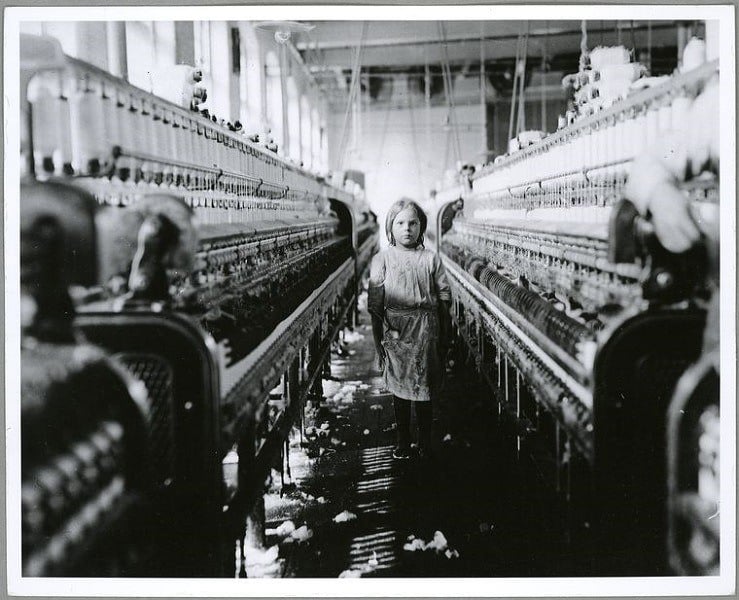 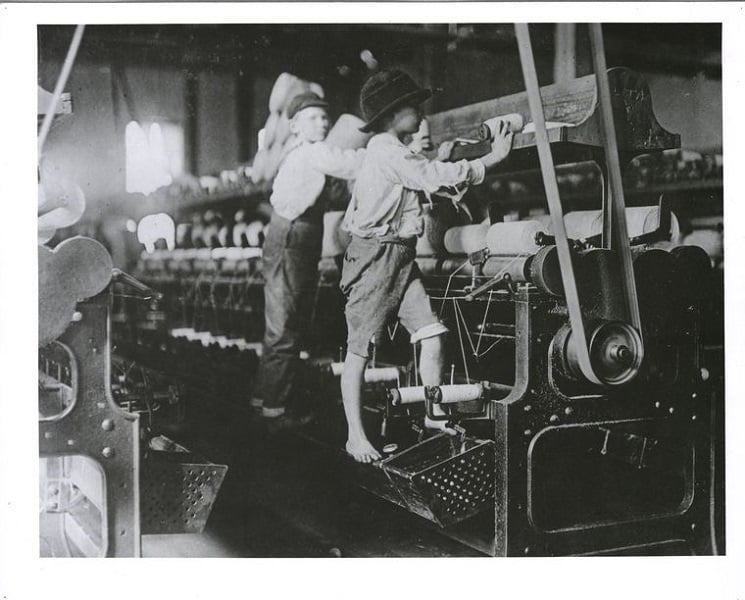 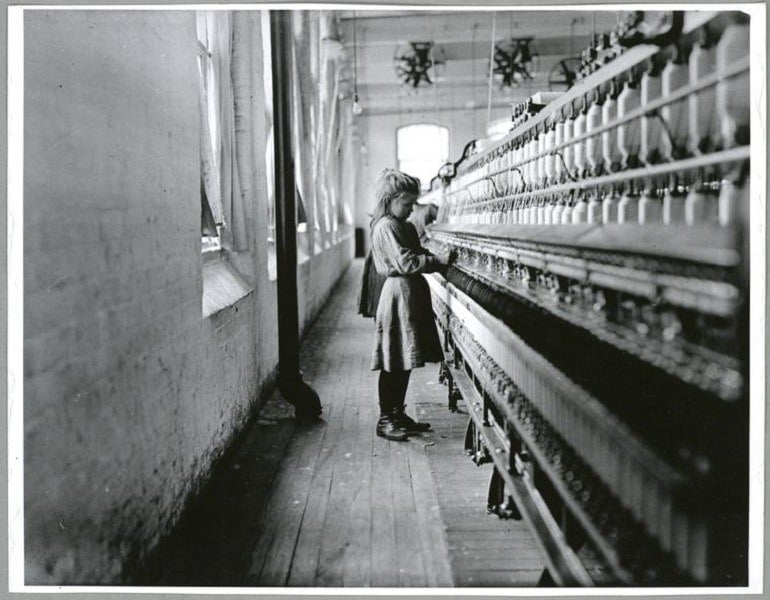 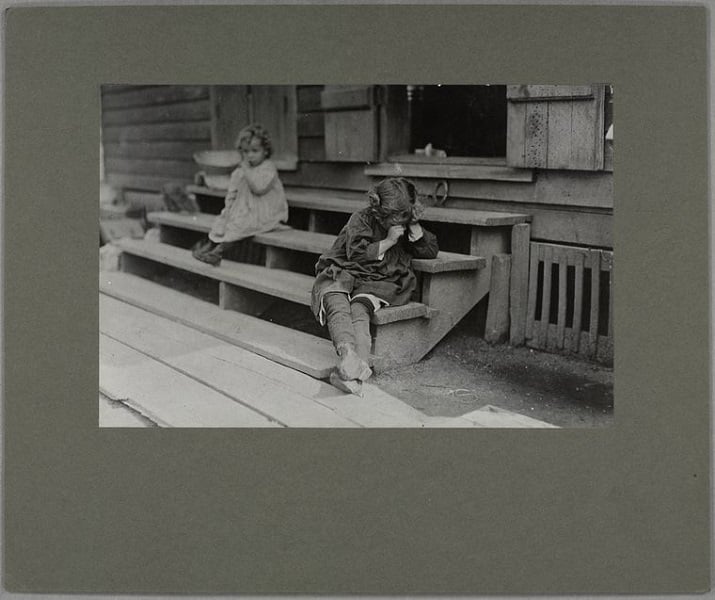 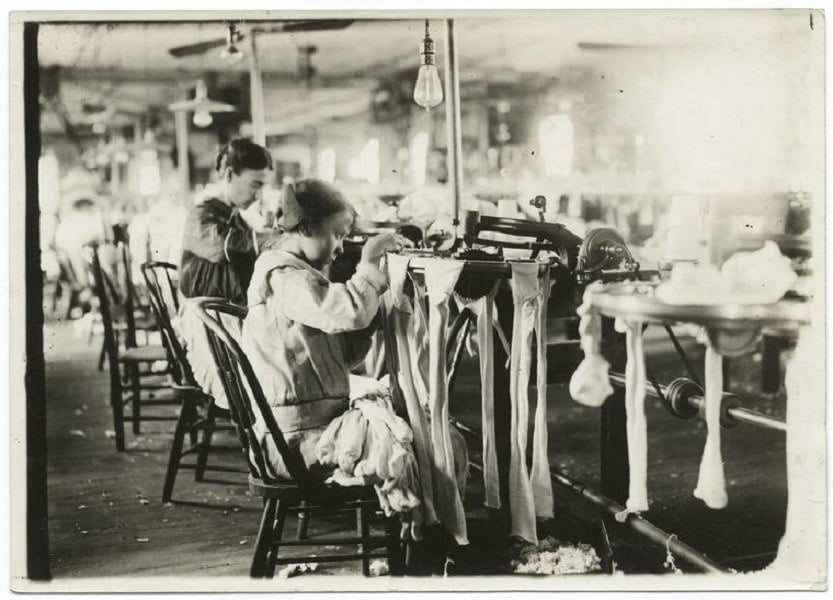 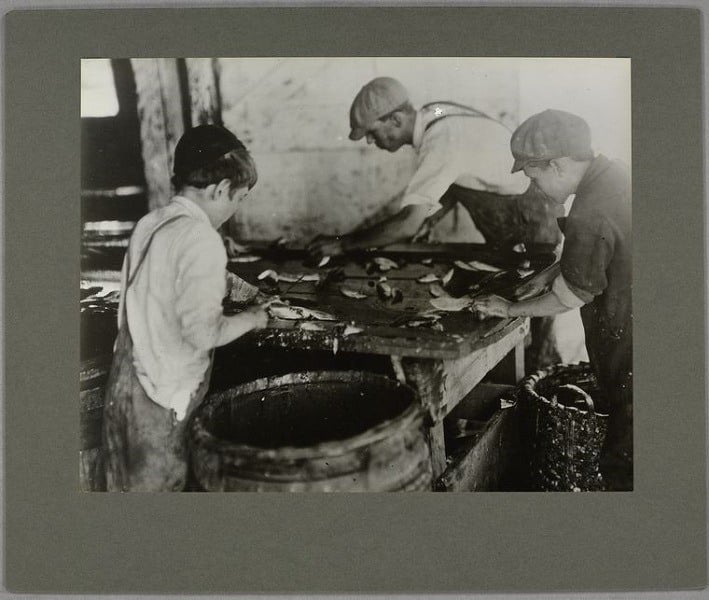 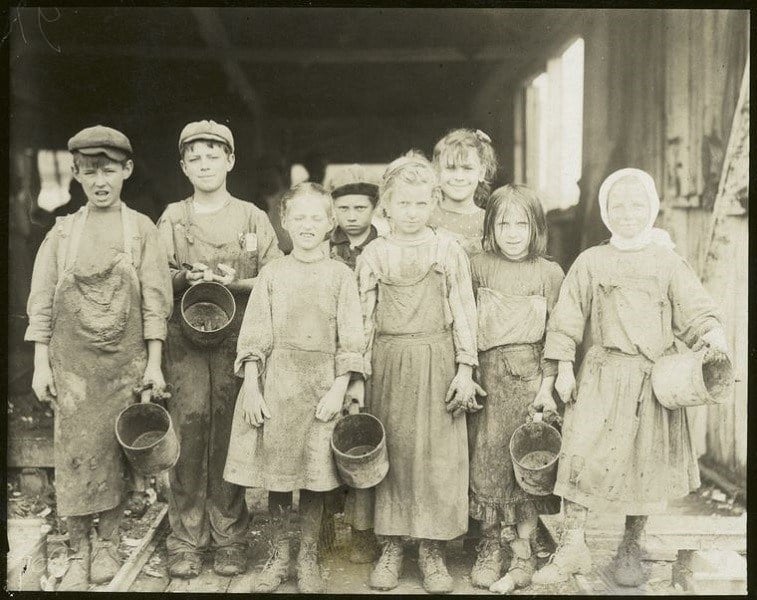 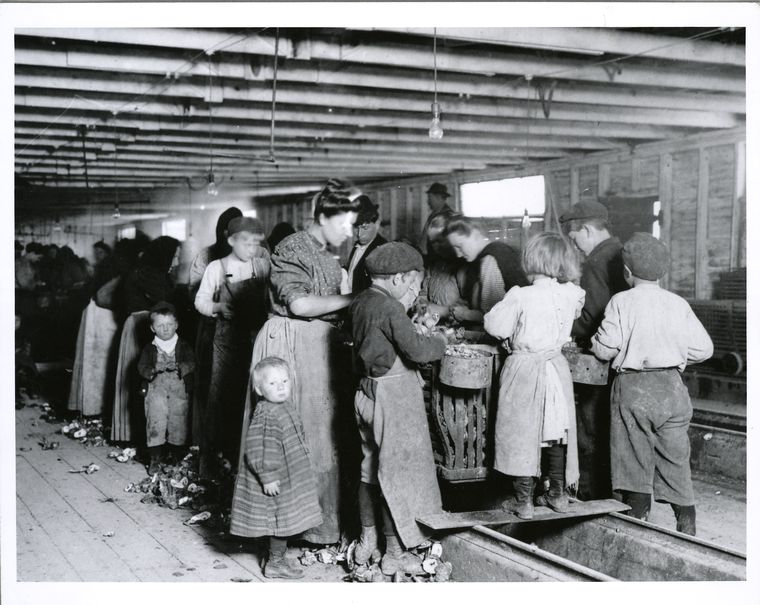 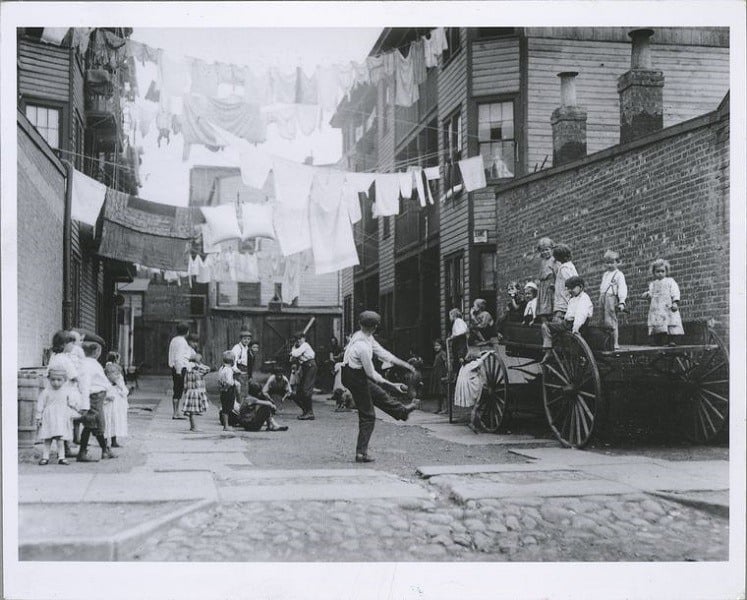 1 of 24
At the time of the 1900 U.S. Census, one in six children between the ages of five and ten participated in the workforce. In fact, at the time child labor made up 20 percent of the entire work force. Most were out of school and illiterate because their parents had no choice but to send them to work so that they could help support their families. Lewis Hine/NYPL
2 of 24
The Industrial Revolution had the effect of drawing more and more people moved to cities, where they would compete for low-wage, heavy-labor work.

Many families depended on their children for income, and with no labor unions or safety regulations in place to protect children in the work force, employers were free to exploit this new form of labor.Lewis Hine/NYPL
3 of 24
In 1900, around 1 million people were injured while working in a factory, many of them children. In fact, 50 percent of child labor conditions included hazardous work. Hands were mangled and fingers lost in the fast-moving machinery; exhausted kids who nodded off would sometimes fall into the machinery; and those confined to tight spaces died in explosions, cave-ins, and fires. Lewis Hine/NYPL
4 of 24
In New York, state laws prevented children younger than 14 from working in the factories. But in workshops set up in private homes, no such regulations existed. Thus, after their "work day" had ended, children often took home large bundles of unfinished garments from the factories so that they could finish them at home.Lewis Hine/NYPL
5 of 24
If New York City child laborers were lucky, they worked in "new law" tenements, which operated in full compliance with lighting and ventilation laws. More often, though, these children and their families — usually immigrants — lived in dilapidated, over-crowded and barely-livable tenements.Lewis Hine/NYPL
6 of 24
In some of Lower Manhattan's tenement houses, children made artificial flowers in makeshift factories. Some families made up to $20 per week, but that meant that children worked until 8 p.m., making as many as 1,700 flowers per day, and then attended school the next day. Lewis Hine/NYPL
7 of 24
In addition to artificial flower making and garment work, women and children shelled nuts in their at-home workspaces, picking up the slack when the male breadwinner in the family was out of work. Lewis Hine/NYPL
8 of 24
Often, parents kept their children at home and forced them to do garment work, like sewing buttons on trousers (which sometimes paid as little as six cents a piece).

Forcing very young children to stay home from school violated the law, but once a child passed the age of 14, truant officers could not enforce compulsory education laws. Lewis Hine/NYPL
9 of 24
In the late 1800s, as many as 10,000 homeless boys lived in the streets of New York City, sleeping beneath the stairways of newspaper offices. Once they got their hands on the day's papers, they harassed pedestrians for money, still usually only making 30 cents per day. Lewis Hine/NYPL
10 of 24
In 1899, however, news boys went on strike. They refused to handle the newspapers of Joseph Pulitzer and William Randolph Hearst until the companies provided better compensation for the child labor force responsible for widely circulating their publications. Lewis Hine/NYPL
11 of 24
"Breaker-boys" like these children worked in the coal mines of Pennsylvania, where they separated coal from slate by hand. They usually worked ten hours per day, six days a week.

Asthma and black lung were common among breaker-boys, and many lost limbs after being caught in machinery, or were crushed to death by mounds of coal or under the conveyor belts they worked near. Lewis Hine/NYPL
12 of 24
Children play a card game outside a factory building. Lewis Hine/NYPL
13 of 24
Public outcry against children working in these conditions helped create a Pennsylvania law that banned anyone under the age of 12 from working in the state as a coal breaker. But the law was poorly enforced: Families sometimes forged birth certificates so that their children could continue to help support the family, and because child labor was cheap and profitable, employers often forged these documents themselves. Lewis Hine/NYPL
14 of 24
Eventually, new technology, like mechanical and water separators, made breaker boys obsolete. Mandatory education laws and stricter enforcement of child labor laws, by and large brought about by the photographs of Lewis Hine, helped end the practice by 1920. Lewis Hine/NYPL
15 of 24
Elsewhere, children working in cotton mills, like this one in North Carolina, were often orphans. The mills employed these children in exchange for shelter, food, and water. Lewis Hine/NYPL
16 of 24
In the mills, children as young as five and six years old worked ten-hour days six days a week without breaks. What's more, scraps of cotton filled the air, causing frequent cases of lung disease.Lewis Hine/NYPL
17 of 24
Children in mills also worked as doffers, replacing the spools in the spinning machine (and risking falling into the machinery) or as spinners. For their trouble, child laborers in the mills earned 40 cents per day.Lewis Hine/NYPL
18 of 24
A young girl rests after a long work day. Lewis Hine/NYPL
19 of 24
During this period, factories were not heated or air-conditioned, and lacked sufficient ventilation and lighting. Pay was no better: Girls working in 1850s garment factories, for instance, made just a little more than 100 dollars per year. Lewis Hine/NYPL
20 of 24
In Maine's sardine canneries, small children, called "cutters," were given knives to cut off the heads and tails of the fish. Because employers incentivized dangerously quick work, and because the fish could be quite slippery, copious injuries ensued.Lewis Hine/NYPL
21 of 24
In the South, children worked shifts as oyster shuckers in canneries before and after attending school. Employees at the canneries usually worked 14-hour days, and lived in special camps set up to house the factory's entire work force.Lewis Hine/NYPL
22 of 24
Mothers often brought their children to factories because they lacked childcare options. Even though children did not receive a permit to work in the canneries until 14, the younger ones still helped shuck, but would sometimes have to hide if an investigator came to inspect factory conditions.Lewis Hine/NYPL
23 of 24
Though the National Child Labor Committee was established in 1904, child laborers would have to wait more than 30 years until comprehensive restrictions and laws were put into place -- partly with the help of Hine's photos.

The Fair Labor Standards Act, passed in 1938, finally fixed the minimum age of employment at 16 (18 for more dangerous work) and restricted the number of hours that children were allowed to work -- effectively creating what many take for granted today: childhood.Lewis Hine/NYPL
24 of 24 In 1908, Lewis Hine became the official photographer of the National Child Labor Committee. Over the next ten years, Hine photographed child workers across the country, from New York to the Carolinas to Pittsburgh, documenting the appalling conditions in which these children worked. Unlike documentary photographers who seek simply to highlight events and conditions, Hine did so with a political goal in mind: to end the practice of child labor.

At the time, business owners across the country reaped sizable profits from child labor and fought against any proposed reforms that would increase worker protections and therefore make them more expensive. In fact, owners often flat-out refused to abide by already existing labor laws, meaning that the executives did not exactly welcome the presence of photographers like Hine.

Accordingly, Hine faced resistance from both police and factory foremen who barred him from their factories, fearing that his photographs would threaten their entire industries, be they canneries or cotton mills.

In order to gain entry into these facilities, Hine often disguised himself -- and faced threats, even threats on his life, if he was found out.

Undeterred, Hine kept shooting and spread his photographs everywhere he could: pamphlets, magazines, photography exhibitions, and lectures. Ultimately, the images he presented of work-weary, injured, impoverished children helped convince the federal government to enact and enforce stricter laws that would protect children in the workplace, rather than exploit them.

Next, check out Lewis Hine's photos of immigrant life in America. Then, find out what conditions were like in New York City's tenement houses.