The family of gangster Al Capone is auctioning off 174 personal items, including his gun, diamond-monogrammed jewelry, personal letters, and even the last photo of him ever taken. 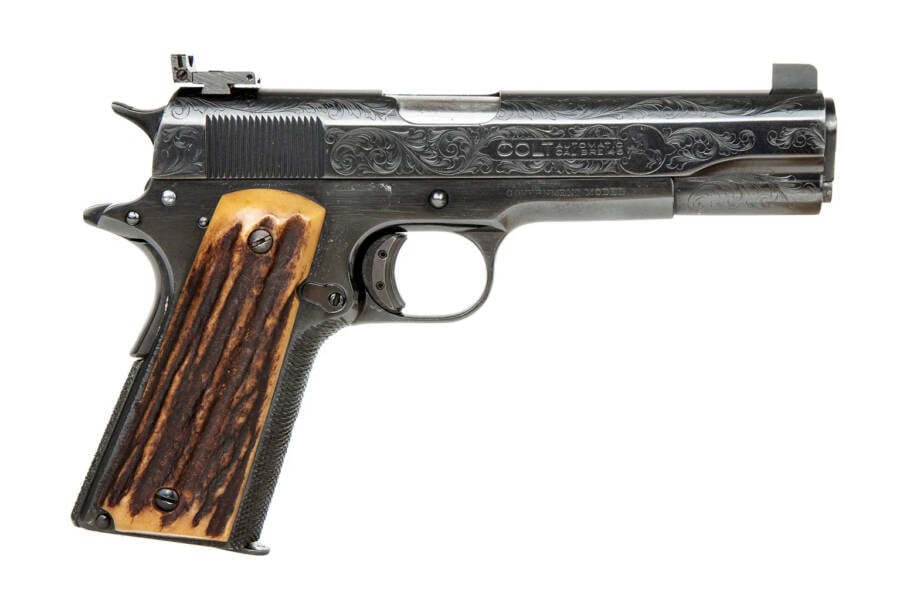 Suffering from an advanced stage of untreated syphilis, Al Capone spent his final days in a hallucinatory trance and ranting at imaginary guests. Dead at 48 years old, he left behind a family and a Florida mansion full of valuable personal belongings — which his surviving granddaughters are auctioning off in October.

According to The Chicago Sun-Times, this includes diamond-encrusted jewelry bearing Capone’s initials, his favorite gun, and letters to Sonny Capone — his only son. Dubbed “A Century of Notoriety: The Estate of Al Capone,” the invite-only affair will occur at a private country club in Sacramento, California, on Oct. 8, 2021.

Kept in the family for more than half a century, all 174 items have been authenticated by Witherell’s Auction House. The collection is expected to fetch up to $700,000 and ranges from vintage home movies to letters Capone wrote while imprisoned for tax evasion in Alcatraz in the 1930s.

The auction promises to reveal a glimpse into the personal life of the most notorious Prohibition-era mobster in America. And one of the most highly-priced items available for bidding is a handwritten, three-page, pencil-penned letter to his son — which has an estimated value of up to $50,000. 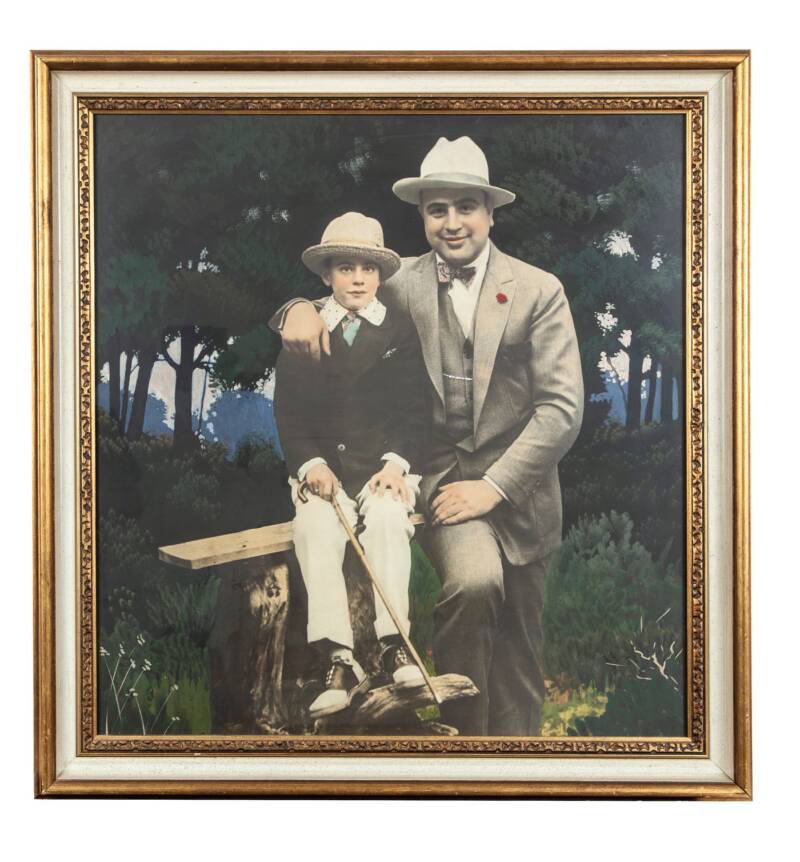 Written before Capone’s wife, Mae, managed to have him transferred from Alcatraz to Chicago County Jail, the letter is dated Oct. 5, 1931. With an official prison stamp reading “Inspected By,” it begins with an affectionate family sentiment: “To My Dear Son, Well Son of my heart, here is dear father, who loves you with all my heart…”

The family also says they have the last photo ever taken of Capone, which is included in the auction. The image, dated Dec. 25, 1946, shows Capone with his wife and three granddaughters on a pier. The gangster died just a month later, on Jan. 25, 1947.

According to Barron’s, Sonny Capone left the heirlooms with his three daughters before dying at 85 years old in 2004. Capone’s granddaughters have been living quietly in California for decades, although Diane Capone, 77, wrote a tell-all memoir in 2019, which she will be signing the day before the auction.

“What people don’t know is his personal story as a father and grandfather and his painful path of redemption while at Alcatraz,” said Diane. “That is the unknown Capone I talk about in my book, and it’s the story that comes to life with these family treasures.” 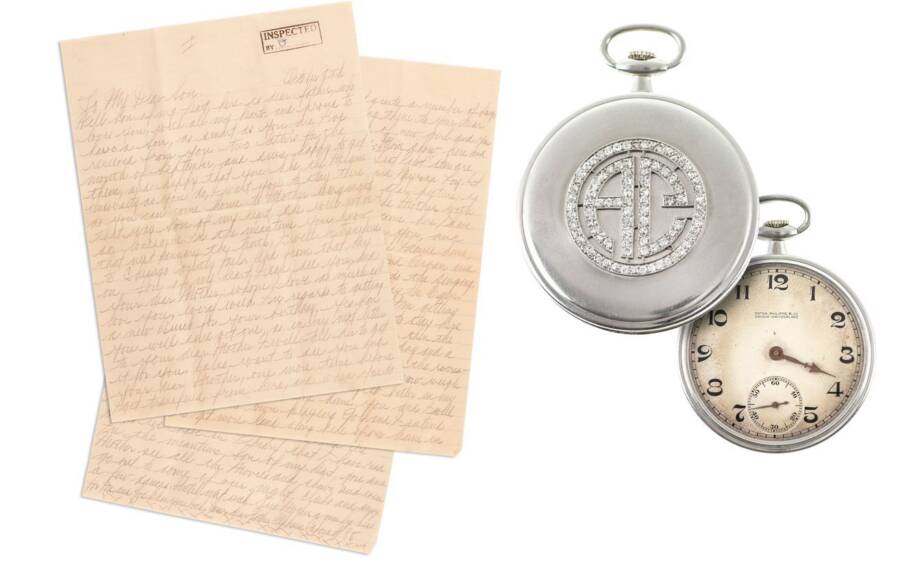 “His granddaughter referred to it as his favorite pistol,” said Brian Witherell, co-founder of the auction house. “He probably used it as a defense gun. As the most shot-at man in history, he would be inclined to have one to have some protection.”

Capone’s rise in organized crime in the early 20th century was virtually unprecedented. As co-founder and boss of the Chicago Outfit, his bootlegging, loan sharking, and extortion involved murder and shootouts like the St. Valentine’s Day Massacre, in which seven of his enemies were killed in broad daylight, to thwart the competition. 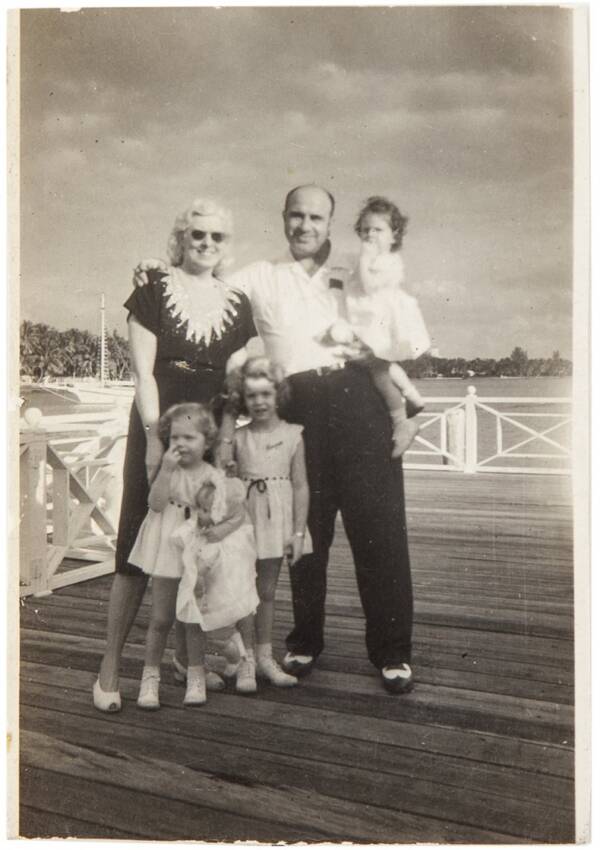 Witherell’sAl Capone’s granddaughters say this photograph, taken December 25, 1946, is the last picture of him ever taken. Capone died January 25, 1947.

The FBI would designate Capone as the nation’s Public Enemy No. 1, but fail to incriminate him on the litany of felonies due to extreme corruption and organized crime’s code of silence. In the end, Capone was nabbed on for tax evasion in 1931 and imprisoned in Atlanta, Alcatraz, and Chicago.

He was ultimately released early in 1938, riddled with syphilis he got during his early days as a gangster. And now, nearly eight decades after his 1947 stroke and cardiac arrest in Florida, 200 lucky lottery winners will be able to attend this limited gathering to own one of Capone’s personal items.

The last time Capone’s personal belongings went up for auction, one of his watches sold for more than $84,000 in 2017 — exceeding its pre-auction value by a factor of three.

These items, however, bear the authenticity of a family signature, according to Witherell’s: “They are offered directly from the family descendants, who are signing documents for each lot to attest its provenance.”

After reading about Al Capone’s personal belongings heading to auction, learn about the St. Valentine’s Day Massacre. Then, read about the death of Al Capone and his bizarre final days.