From exorbitant wealth to unspeakable violence, these Al Capone facts reveal a shocking tale of booze, bullets, and blood. 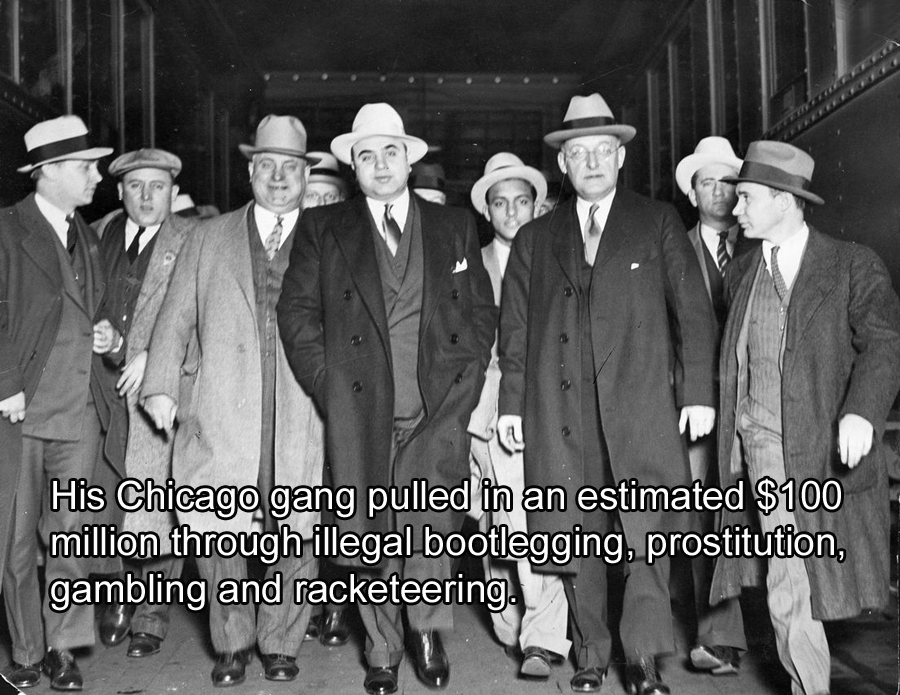 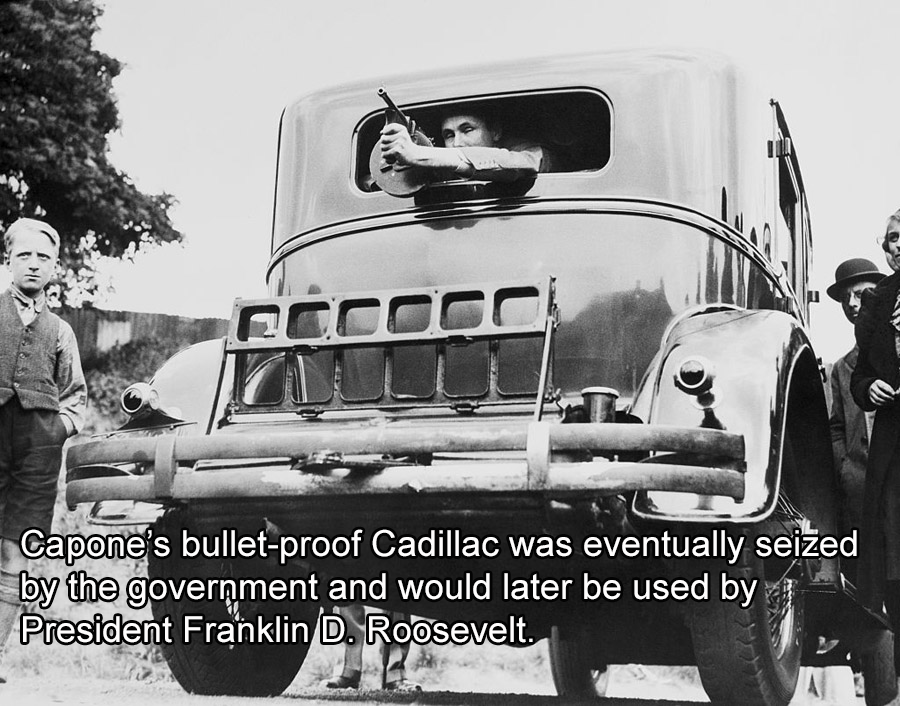 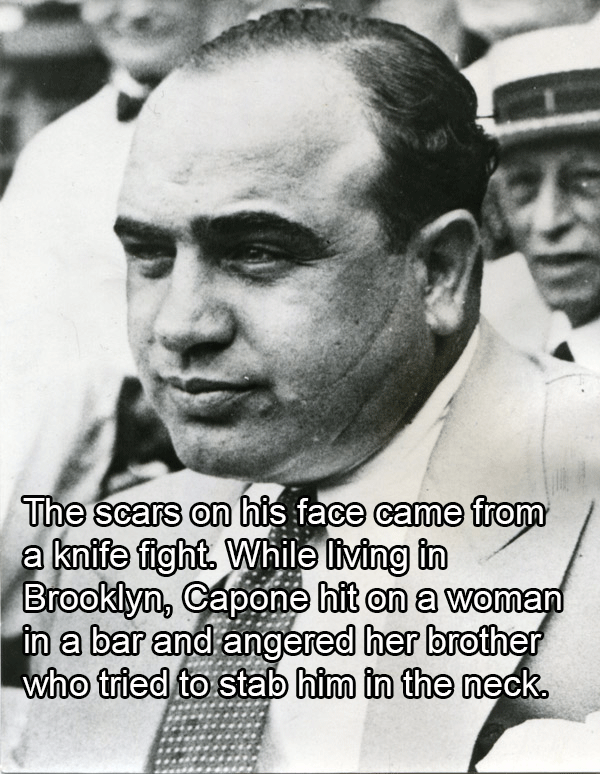 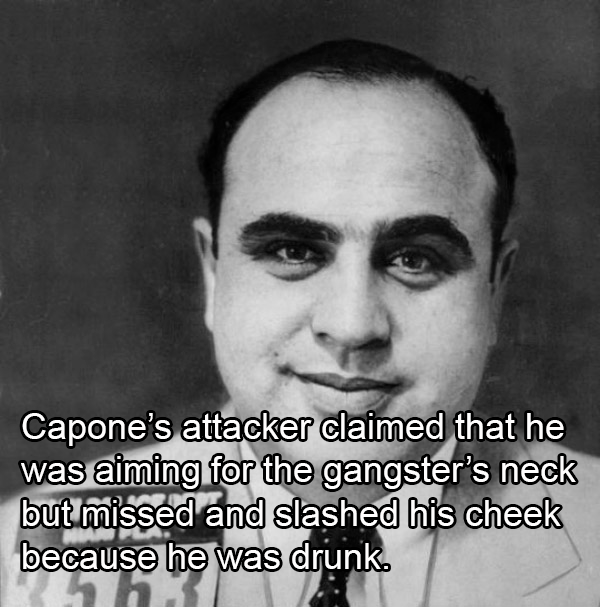 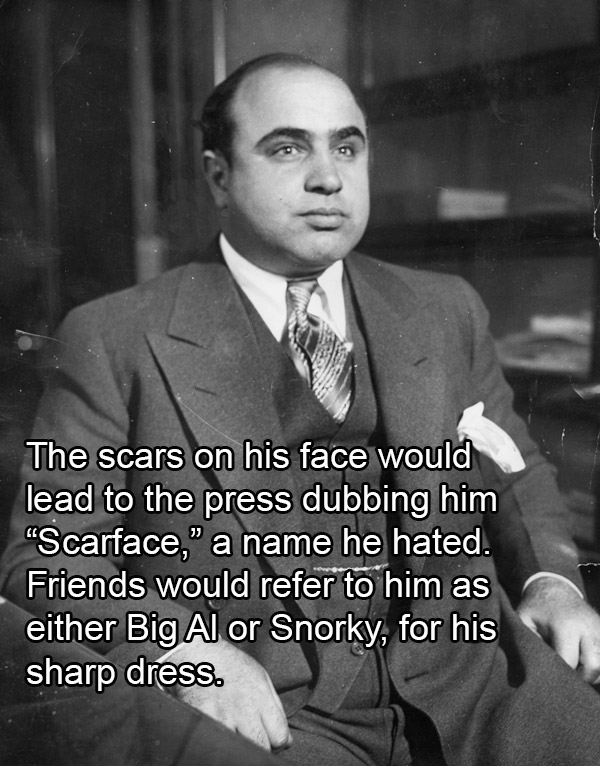 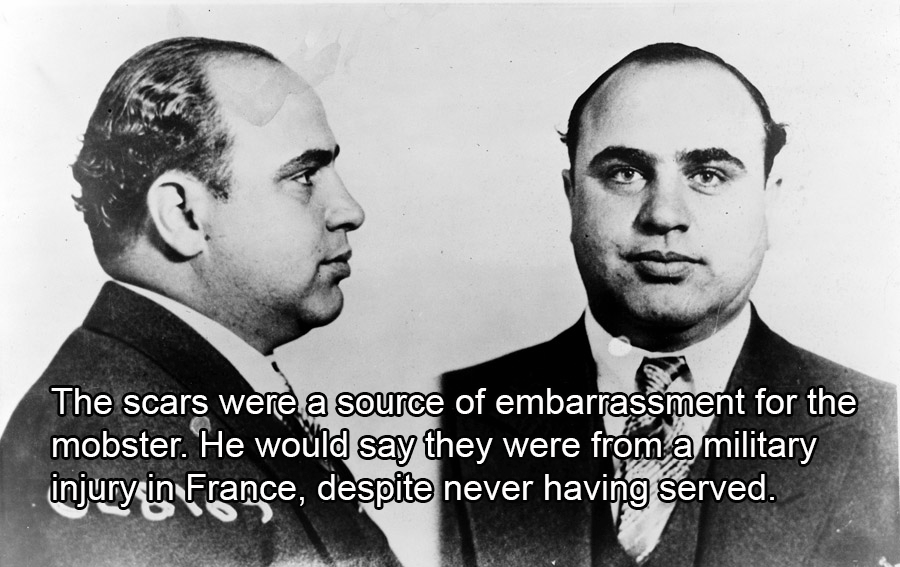 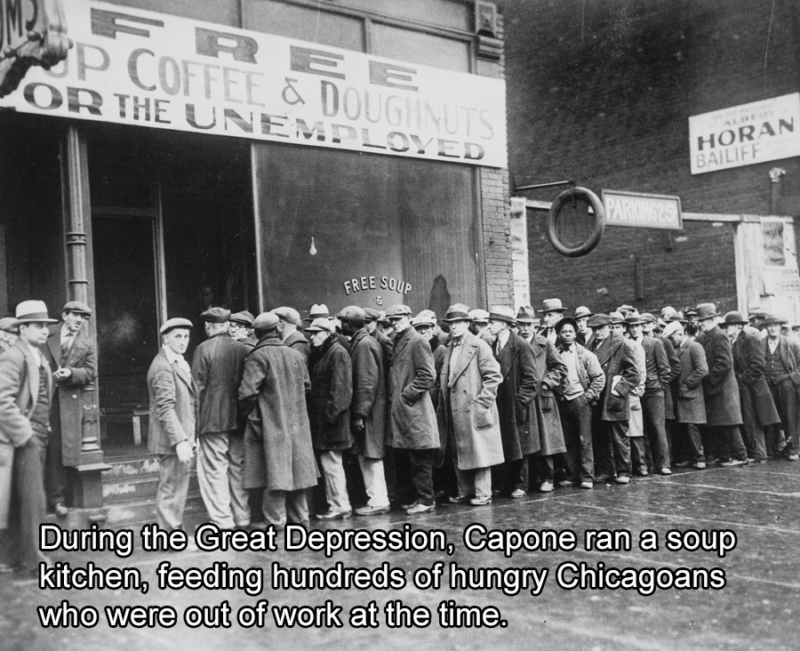 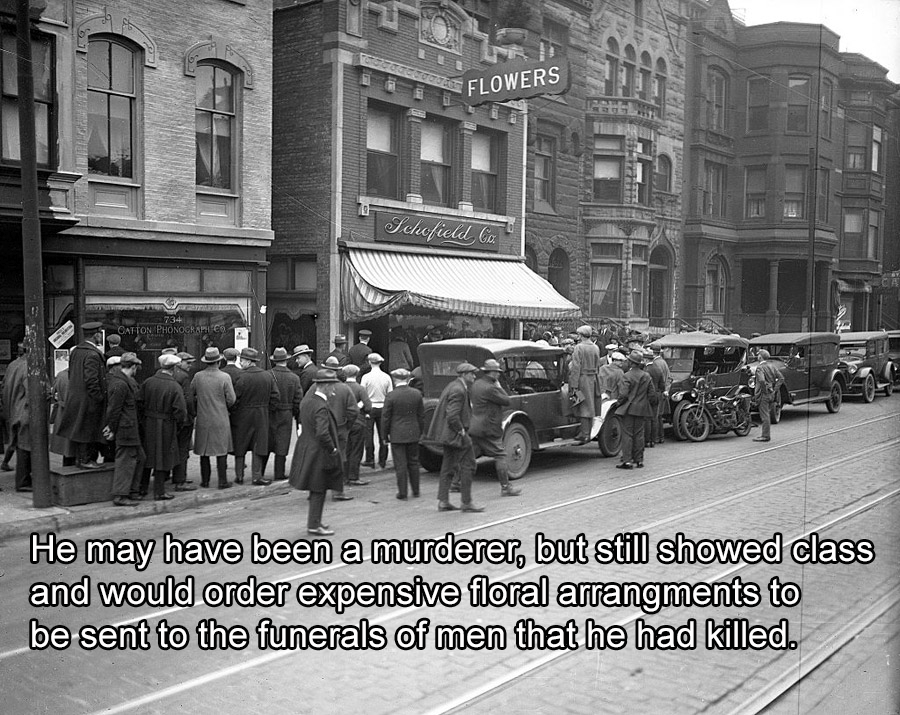 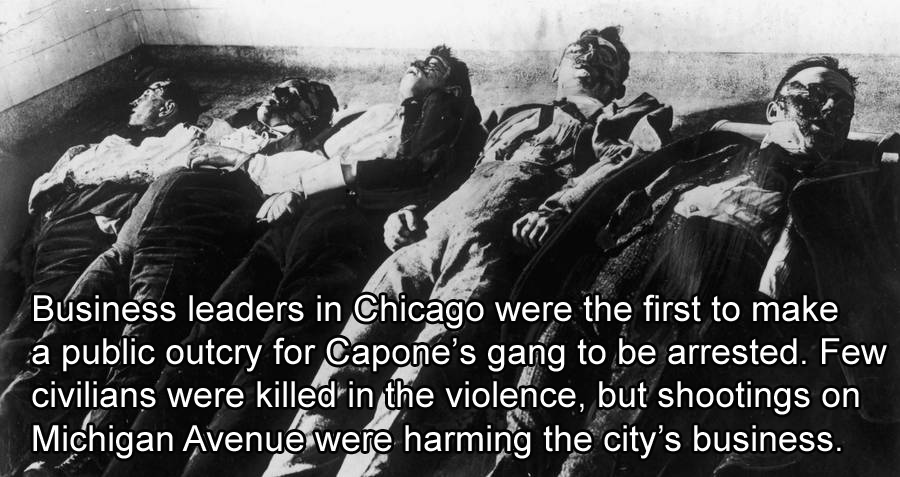 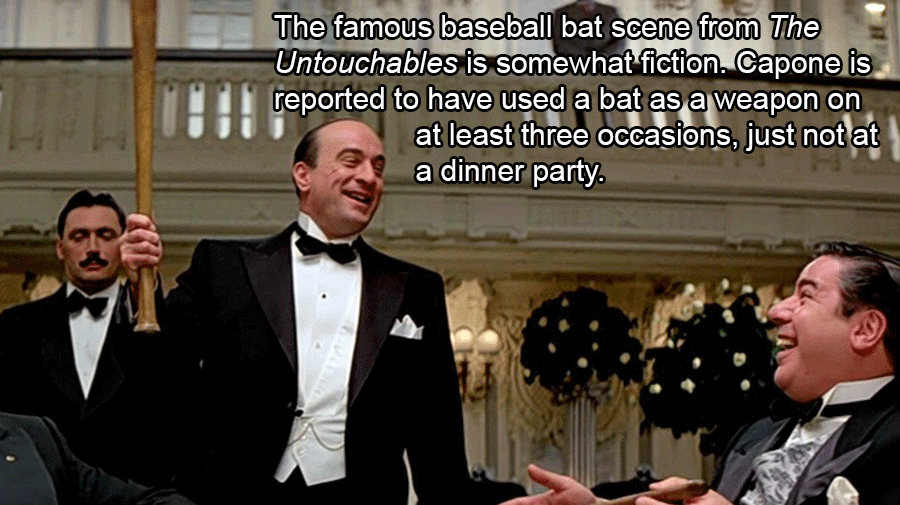 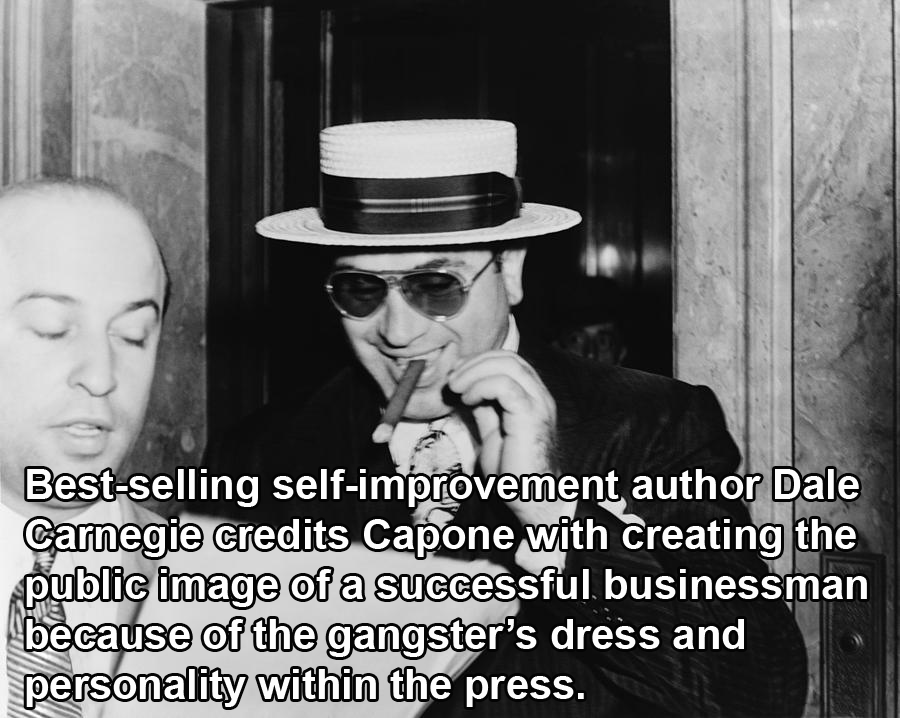 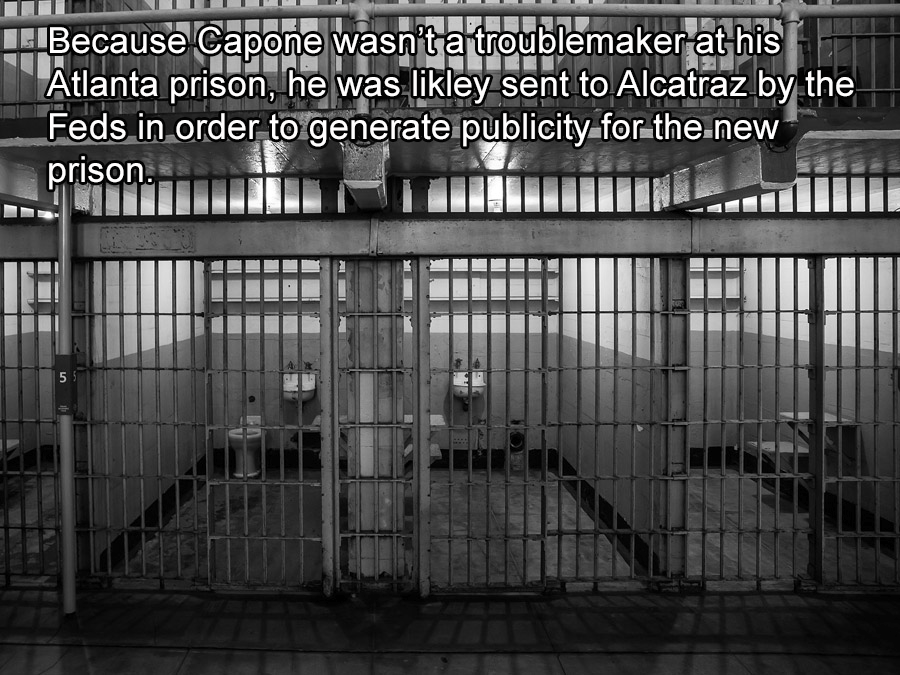 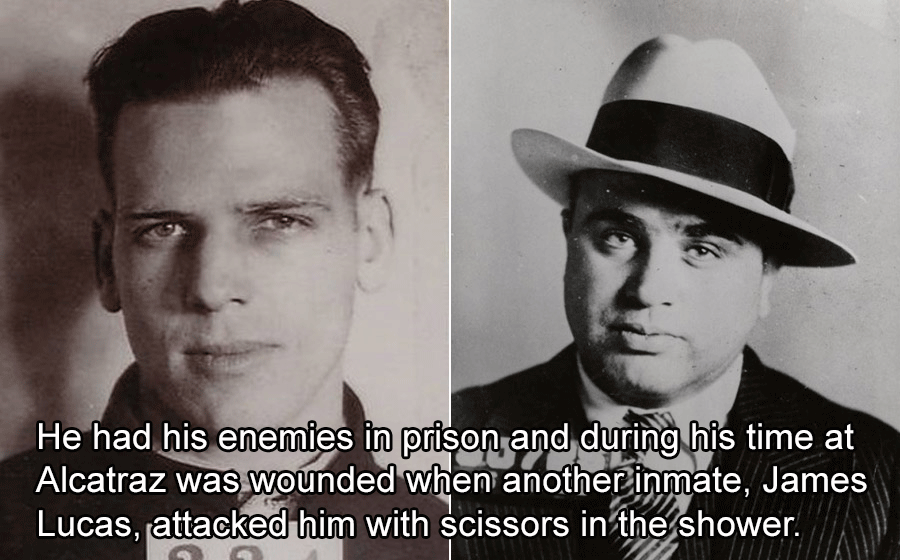 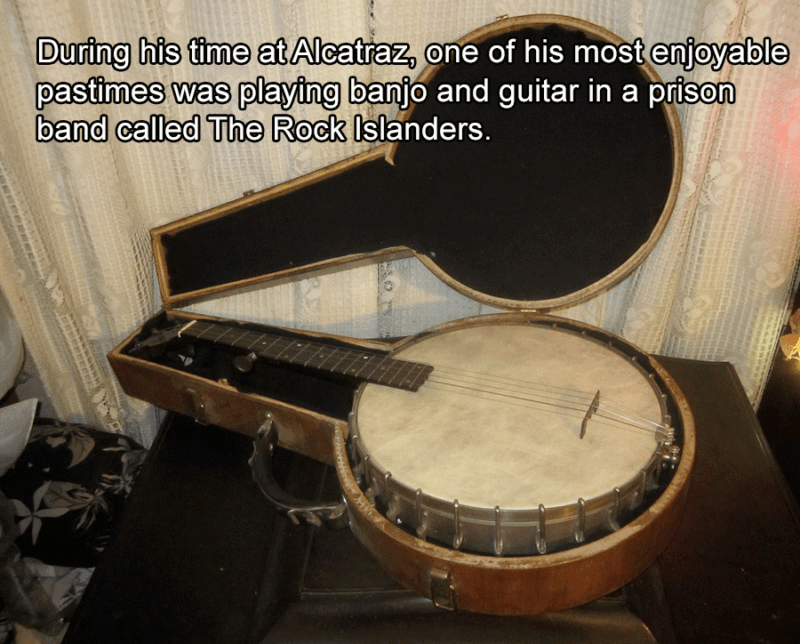 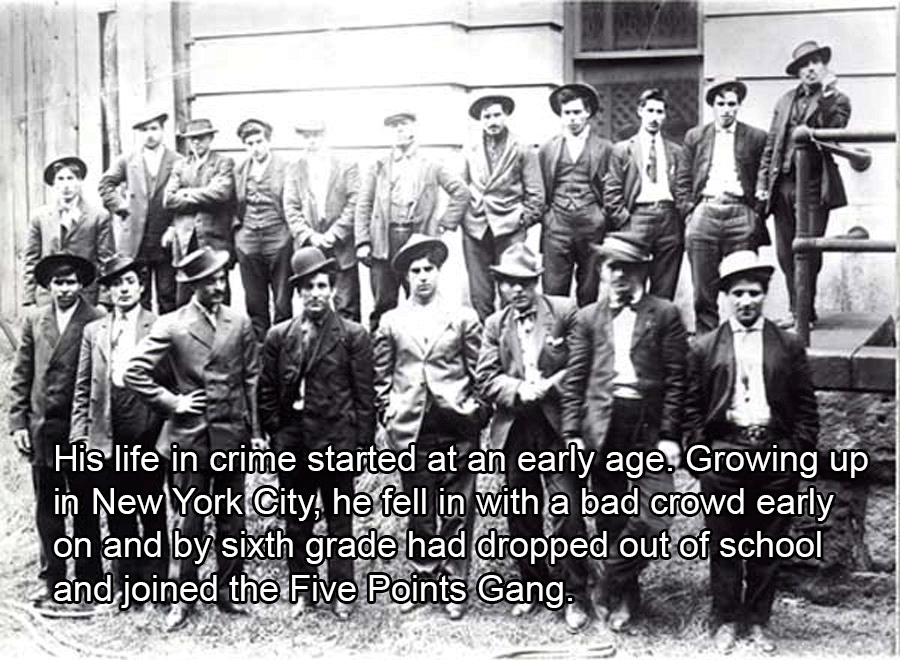 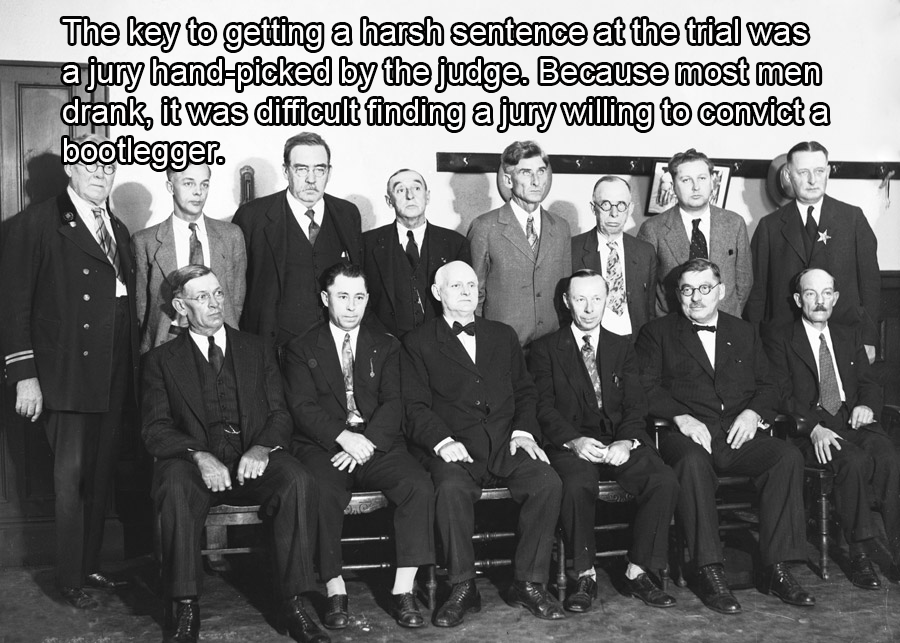 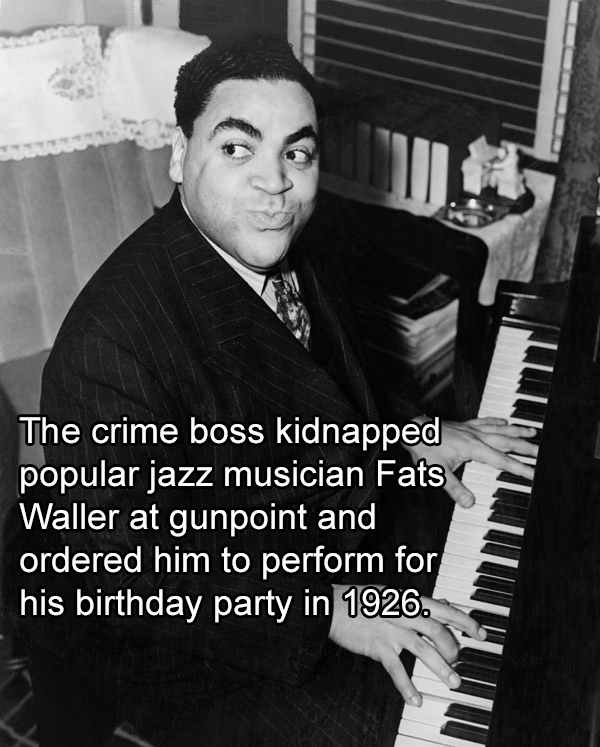 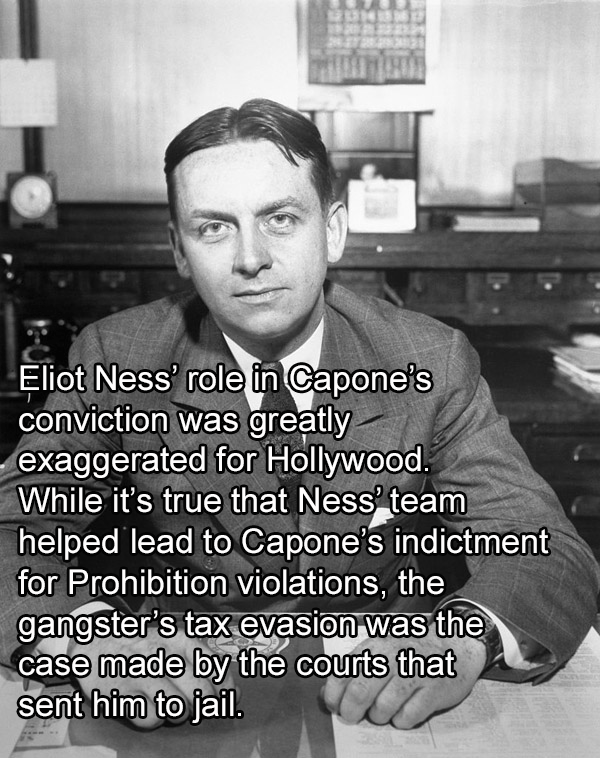 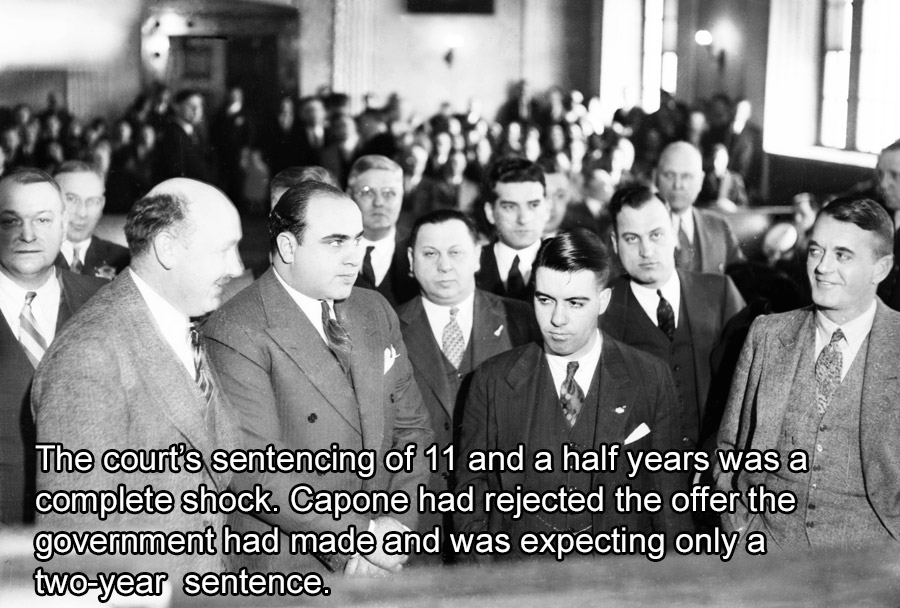 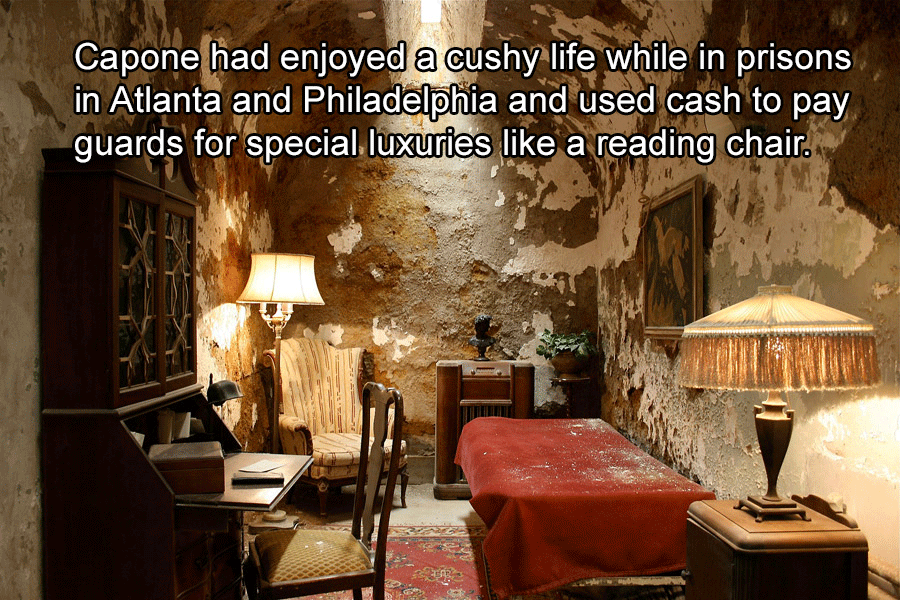 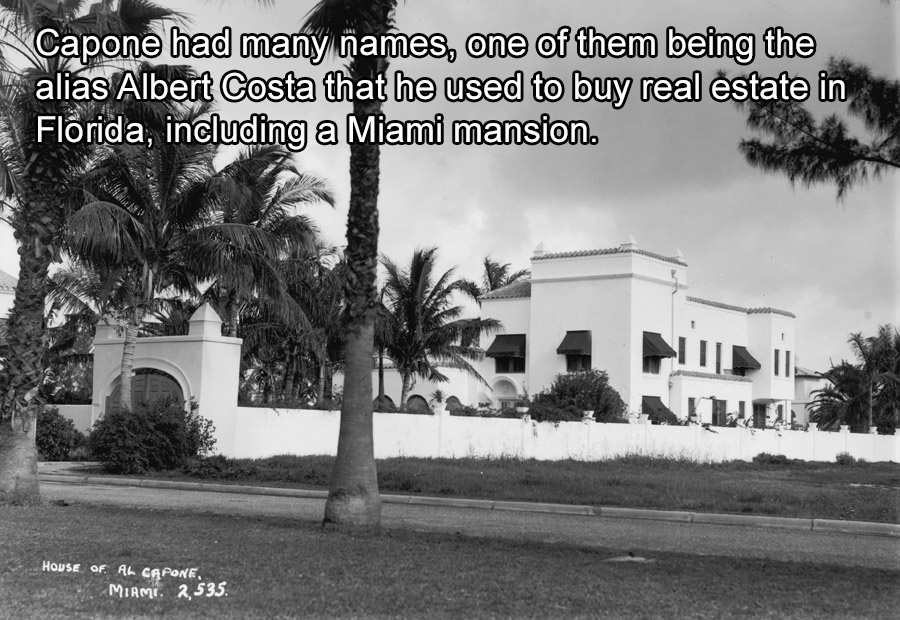 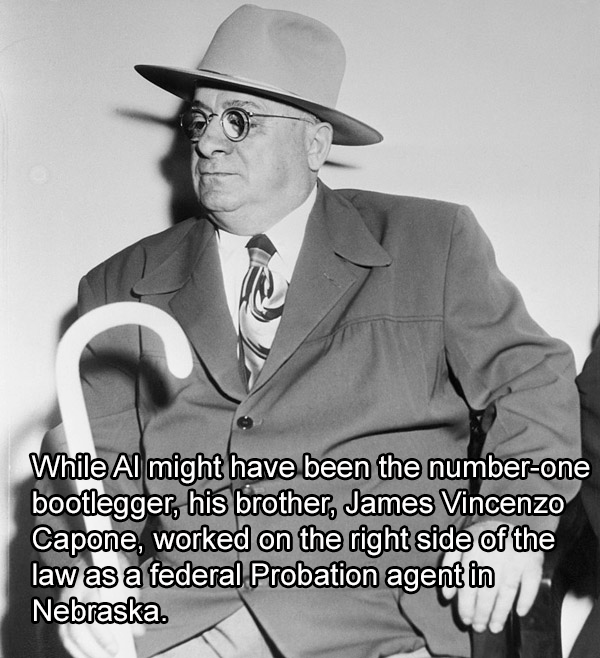 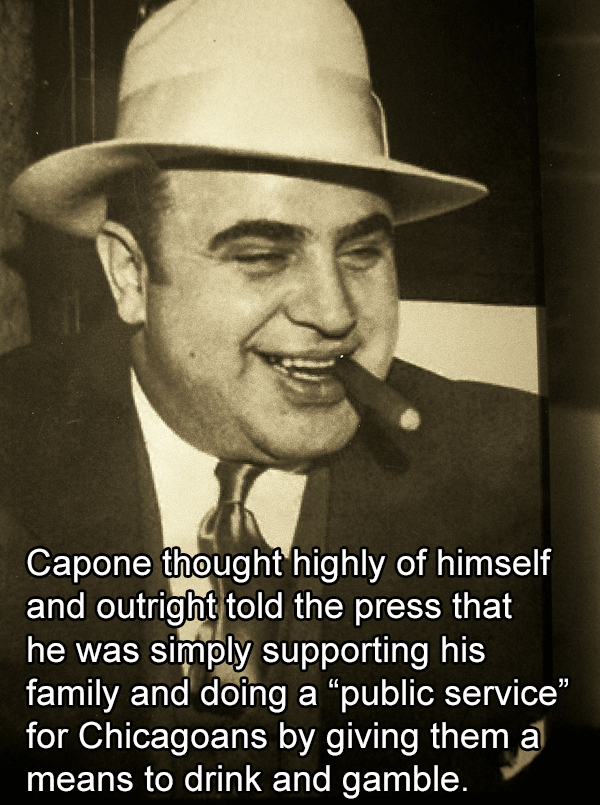 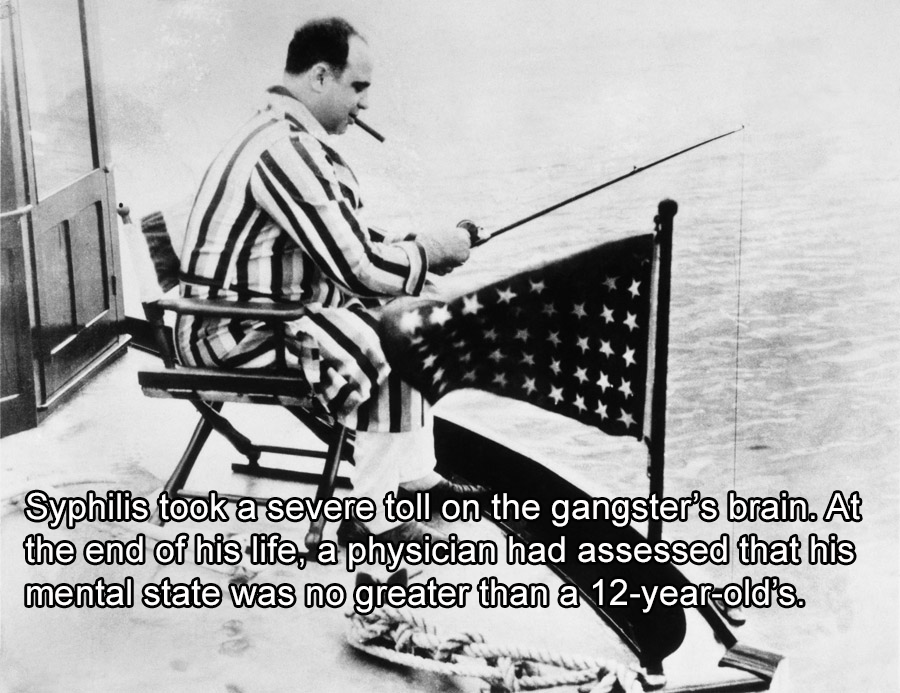 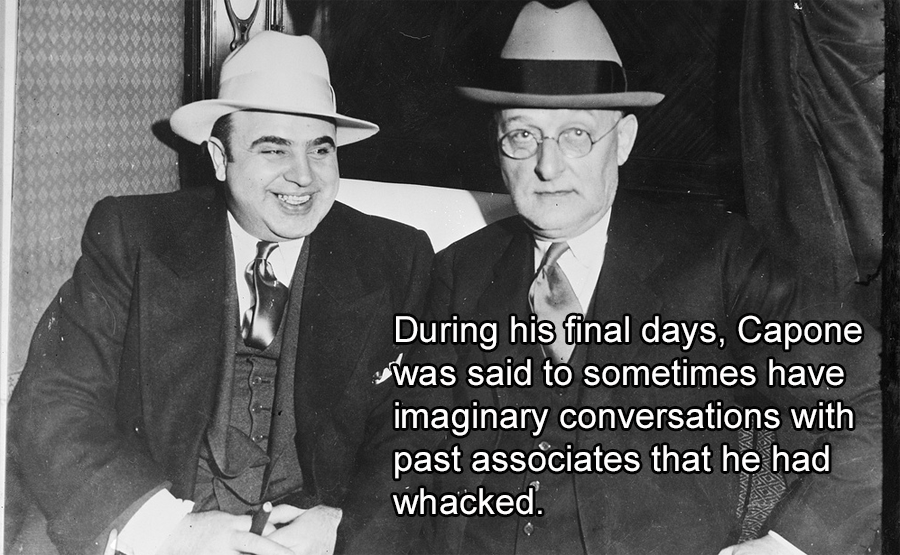 1 of 26
His Chicago gang pulled in an as much as $100 million annually through illegal bootlegging, prostitution, gambling and racketeering.Boston Public Library/Flickr
2 of 26
Capone's bullet-proof Cadillac was eventually seized by the government and would later be used by President Franklin D. Roosevelt.Bettmann/Contributor/Getty Images
3 of 26
The scars on his face came from a knife fight. While living in Brooklyn, Capone hit on a woman in a bar and angered her brother, who tried to stab him in the neck. PhotoQuest/Getty Images
4 of 26
Capone's attacker claimed that he was aiming for the gangster's neck but missed and slashed his cheek because he was drunk. Miami Police Dept./Wikimedia Commons
5 of 26
The scars on his face would lead to the press dubbing him "Scarface," a name he hated. Friends would refer to him as either Big Al or Snorky, for his sharp dress. Wikimedia Commons/FBI
6 of 26
The scars were a source of embarrassment for the mobster. He would say they were from a military injury in France, despite having never served.United States Bureau of Prisons/Wikimedia Commons
7 of 26
During the Great Depression, Capone ran a soup kitchen, feeding hundreds of hungry Chicagoans who were out of work at the time. National Archives/Wikimedia Commons
8 of 26
He may have been a murderer, but still showed class and would order expensive floral arrangments to be sent to the funerals of men that he had killed. Chicago Tribune historical photo/TNS via Getty Images
9 of 26
Business leaders in Chicago were the first to make a public outcry for Capone's gang to be arrested. Few civilians were killed in the violence, but shootings on Michigan Avenue were harming the city's business. FPG/Hulton Archive/Getty Images
10 of 26
The famous baseball bat scene fromThe Untouchables is somewhat fiction. Capone is reported to have used a bat as a weapon on at least three occasions, just not at a dinner party. Paramount Pictures
11 of 26
Best-selling self-improvement author Dale Carnegie credits Capone with creating the public image of a successful businessman because of the gangster's dress and personality within the press. Library of Congress
12 of 26
Because Capone wasn't a troublemaker at his Atlanta prison, he was likely sent to Alcatraz by the Feds in order to generate publicity for the new prison.Wikimedia Commons
13 of 26
He had his enemies in prison and during his time at Alcatraz was wounded when another inmate, James Lucas, attacked him with scissors in the shower. NPS/Wikimedia Commons
14 of 26
During his time at Alcatraz, one of his most enjoyable pastimes was playing banjo and guitar in a prison band called The Rock Islanders. Wikimedia Commons
15 of 26
His life in crime started at an early age. Growing up in New York City, he fell in with a bad crowd early on and by sixth grade had dropped out of school and joined the Five Points Gang.Wikimedia Commons
16 of 26
The key to getting a harsh sentence at the trial was a jury hand-picked by the judge. Because most men drank, it was difficult to find a jury willing to convict a bootlegger. Library of Congress
17 of 26
The crime boss kidnapped popular jazz musician Fats Waller at gunpoint and ordered him to perform for his birthday party in 1926. Wikimedia Commons
18 of 26
Eliot Ness' role in Capone's conviction was greatly exaggerated for Hollywood. While it's true that Ness' team helped lead to Capone’s indictment for Prohibition violations, the gangster's tax evasion was the case made by the courts that sent him to jail. Bettmann/Contributor/Getty Images
19 of 26
The court's sentencing of 11 and half years was a complete shock. Capone had rejected the offer the government had made and was expecting only a two-year sentence. Chicago History Museum/Getty Images
20 of 26
Capone had enjoyed a cushy life while in prisons in Atlanta and Philadelphia and used cash to pay prison guards for special luxuries like a reading chair.Eastern State Penitentiary
21 of 26
Capone had many names, one of them being the alias Albert Costa that he used to buy real estate in Florida, including a Miami mansion.Bettmann/Contributor/Getty Images
22 of 26
While Al might have been the #1 bootlegger, his brother, James Vincenzo Capone, worked on the right side of the law as a federal Prohibition agent in Nebraska. Bettmann/Contributor/Getty Images
23 of 26
Capone thought highly of himself and outright told the press he was simply supporting his family and doing a "public service" for Chicagoans by giving them a means to drink and gamble. Boston Public Library/Flickr
24 of 26
Syphilis took a severe toll on the gangster's brain. At the end of his life, a physician had assessed that his mental state was no greater than a 12-year-old's.Bettmann/Contributor/Getty Images
25 of 26
During his final days, Capone was said to sometimes have imaginary conversations with past associates that he had whacked. Boston Public Library/Flickr
26 of 26 No American gangster in history has cemented his place in the public imagination quite like Chicago's Al Capone. Through his various illegal exploits, namely the sale of illegal alcohol during Prohibition, Capone and his gang pulled in mountains of cash and left a trail of bodies in their wake.

And even more impressive than the estimated $100 million ($1.44 billion today) that his illegal activities earned him is the fact that he amassed this enormous wealth in just seven years.

Had he not built his fortune upon crime, Capone would have been a poster boy for the American dream. Born in Brooklyn to working-class immigrant parents in 1899, Capone eventually rose to the heights of American wealth and power.

But the crime that fueled the fortune was inescapable and ever-present, even when Capone was just a boy. By his early teens, he had dropped out of school and joined several street gangs in New York, which he soon left after accepting an invitation from a Chicago crime boss to make the move to the Midwest.

It was in Chicago that Capone would truly make a national name for himself as he took advantage of the public demand for alcohol during Prohibition. In meeting the public's demands, Capone built a reputation for himself as a sharply-dressed Robin Hood of sorts. Meanwhile, his powerful connections within the city government and police made him seemingly untouchable — for a while, at least.

In 1931, Al Capone, the man responsible for untold murders and suffering finally found himself behind bars — for tax evasion. Unable to successfully prosecute him for the crimes that built his fortune, authorities were ultimately able to bring him down on the grounds that he hadn't paid any income tax on that fortune.

Discover more about his astounding tale in the collection of Al Capone facts above.

After reading these Al Capone facts, check out the most ridiculous facts about Pablo Escobar. Then, allow these photos to take you inside the mafia in the 1980s.

Joel Stice
Joel Stice is a writer who enjoys digging into all things pop culture, history, science, and anything weird.
You might also like
Report a bad ad experience
×
Follow hu On