To this day, the bloody photos of the St. Valentine's Day Massacre tell the story of the grisly gangland shooting that unfolded in Chicago on February 14, 1929. 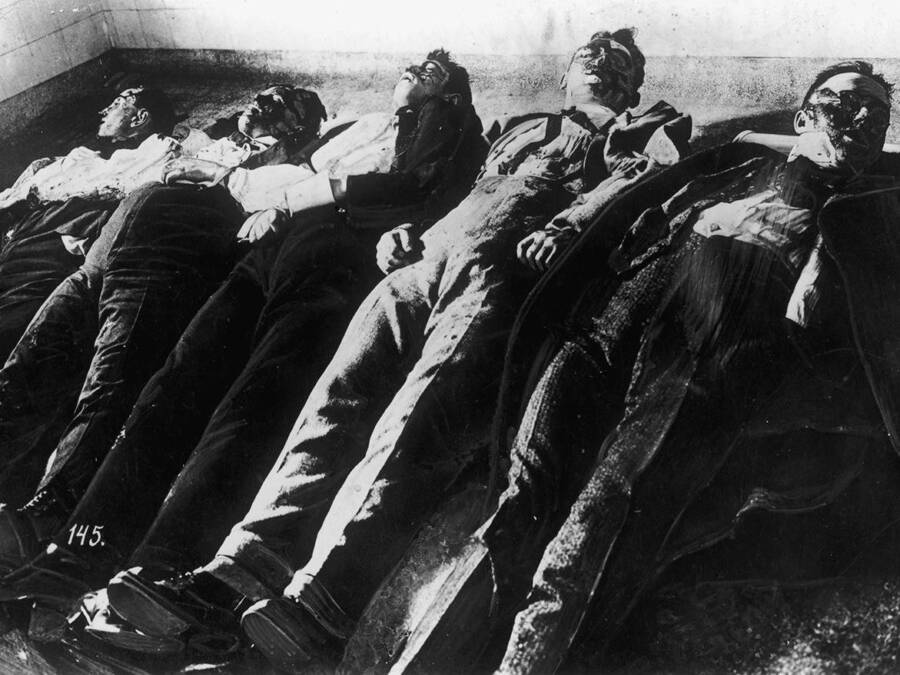 FPG/Getty ImagesOne of the grisliest photos of the St. Valentine’s Day Massacre, which shows five of the victims.

On Feb. 14, 1929, Frank Gusenberg was rushed to a Chicago hospital with 14 gunshot wounds. But when the police asked who shot him, he had a surprising answer: “No one shot me.”

Gusenberg, a well-known local gangster, was either determined to adhere to the criminal’s code of silence or terrified of whoever he knew to be behind the attack. Three hours later, he was dead.

Upon his death, Gusenberg became the final victim of what came to be known as the St. Valentine’s Day Massacre, perhaps the most infamous mob hit in history. Gusenberg and six other members of George “Bugs” Moran’s North Side Gang had been lined up against a wall in his garage and slaughtered in a hail of gunfire.

Many believe that the feared mobster Al Capone was behind the hit, which might explain Gusenberg’s reluctance to say a word to the cops. But, to this day, the perpetrators of the St. Valentine’s Day Massacre remain unknown for certain.

This is the story of the St. Valentine’s Day Massacre of 1929. 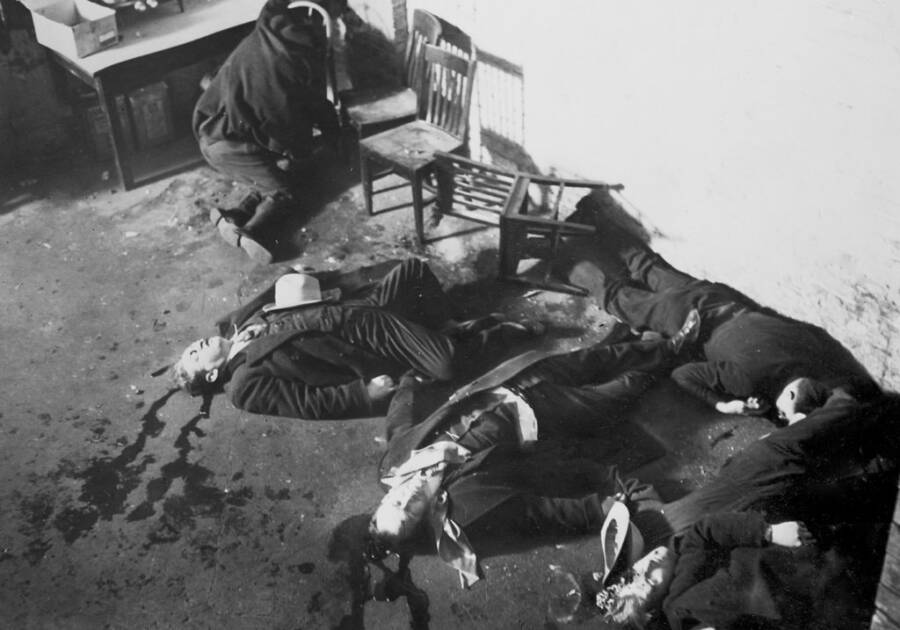 Chicago History MuseumSeven of Bugs Moran’s men were killed in the attack, their corpses immortalized in photos of the St. Valentine’s Day Massacre like this one.

Around 10:30 a.m. on Feb. 14, 1929, four men approached Moran’s warehouse at 2122 North Clark Street. Two were dressed as police officers. The other two looked like well-dressed civilians, in suits and ties, while the driver wore an expensive chinchilla and a gray fedora. They were there on business — but not the kind of business that usually unfolded in broad daylight.

The six men inside the warehouse were affiliated with gang leader George “Bugs” Moran. One of them, Reinhardt Schwimmer, wasn’t really a gang member — he was an optometrist — but liked the appeal of having underworld friends. The others were a mix of killers, embezzlers, and robbers — as well as a German Shepherd named Highball. All of them answered to Moran, and none of them expected anything out of the ordinary on that cold February morning. 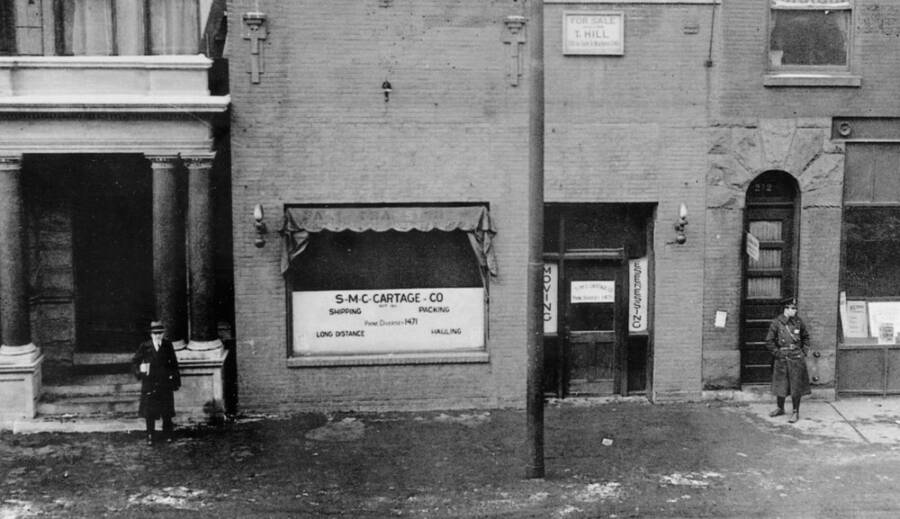 Bettmann/Getty ImagesMoran’s men were attacked at the warehouse he operated at 2122 North Clark Street.

Outside, the four unidentified men had been waiting for a signal. When Albert Weinshank, a nightclub owner who they may have mistaken for Moran himself, entered the building, the four men got the signal to move in. With that, the St. Valentine’s Day Massacre was underway.

No one knows exactly what happened in the warehouse. Were Moran’s men alarmed? Did they shrug it off as a police raid? In any case, they did what they were told: The seven men lined up against the wall, their backs to the intruders. Then the strangers raised their guns — Thompson submachine guns, better known as Tommy guns, and a 12-gauge shotgun — and opened fire.

Bullets sprayed across the line of Moran’s men, spattering blood, breaking bone, and punching into the brick wall behind them. Meanwhile, Highball howled — but was spared from the bullets and was later found by police alive, tied to a car bumper nearby.

The attack ended as quickly as it started. The killers left the building and disappeared into the wind. 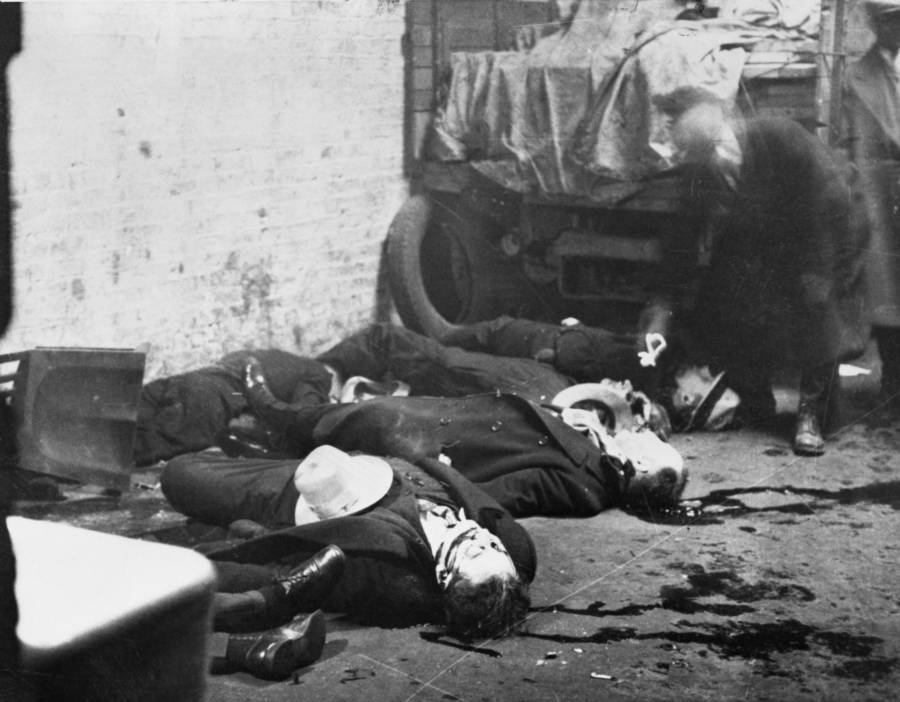 Bettmann/Getty ImagesThe violence of the attack shocked and horrified much of the city of Chicago.

Back in the warehouse, six of Moran’s men lay dead: Albert Kachellek, Adam Heyer, Weinshank, Schwimmer, John May, and Peter Gusenberg. Peter’s brother Frank Gusenberg died later that day. The likely target, however, escaped the incident entirely. Moran himself never made it to the warehouse that morning.

But with everyone dead and no witnesses left, other concrete details about the shooting remain few and far between. To this day, we mostly just have the grisly photos of the St. Valentine’s Day Massacre to give us some clue as to what exactly happened inside that warehouse.

Who Wanted To Kill “Bugs” Moran? 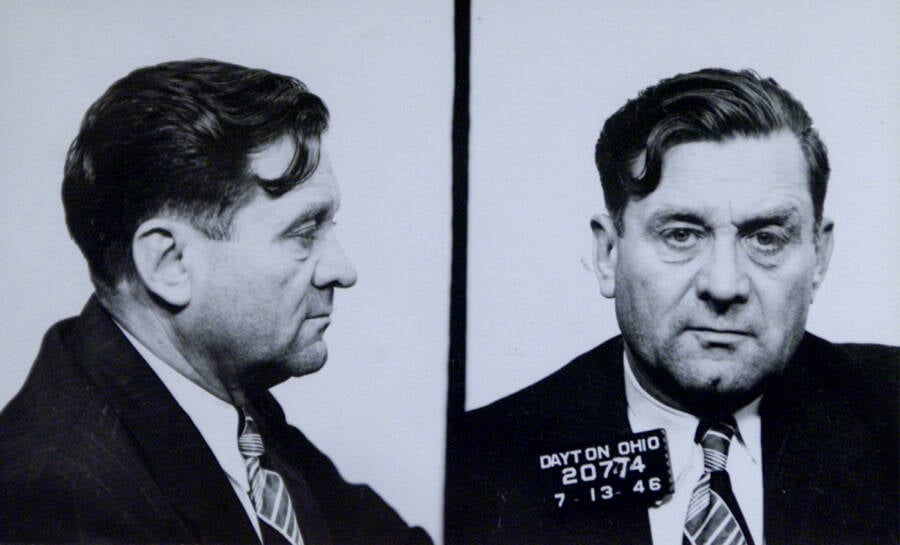 DaytonThough he once ruled much of Chicago, “Bugs” Moran’s power dwindled following the massacre.

The ensuing investigation into the St. Valentine’s Day Massacre focused primarily on rival Chicago mobster Al Capone — even though the gangster had been in a Florida courthouse at the time. But Capone had a wide reach. He also had a well-known vendetta against Moran. Moreover, the hit reeked of Capone’s distinct style.

For much of the decade preceding the massacre, Bugs and Capone ran bitterly opposing gangs in Chicago. Moran’s men were Irish North Siders; Capone’s were Italian South Siders. The two men clashed — often violently — over control of the city in the 1920s, especially when it came to bootlegging booze during Prohibition. In September 1926, Bugs and his men escalated the conflict when they drove past a hotel where Capone and his men were eating and sprayed the building with more than 1,000 bullets. Yet somehow, Capone escaped unharmed. 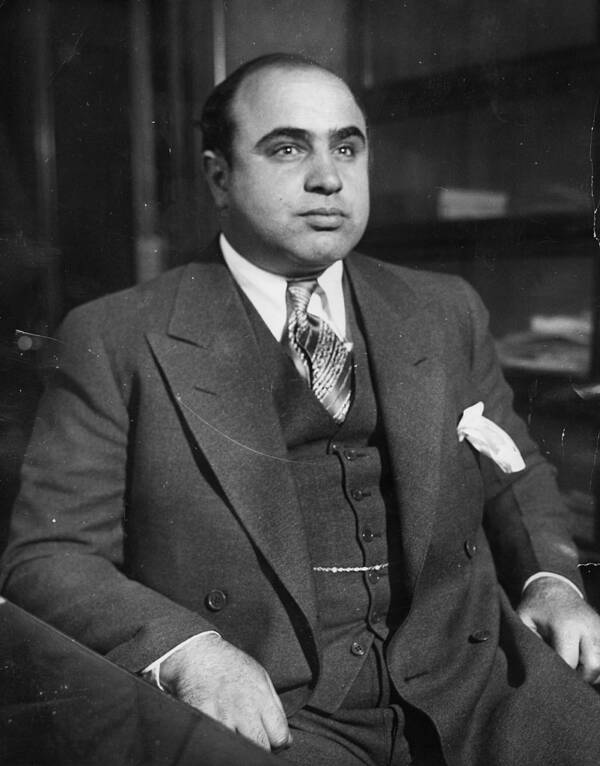 Federal Bureau of InvestigationAl Capone was just 30 years old at the time of the St. Valentine’s Day Massacre.

Eventually, upon hearing that Bugs had put a $50,000 bounty on his head, Capone allegedly decided he’d had enough of the turf wars. He would strike first. And his strike would be fatal.

In the weeks leading up to the St. Valentine’s Day Massacre, Moran had been working on procuring a shipment of stolen Canadian whiskey, an enterprise in which Capone was also heavily invested. Moran ran his illegal operation out of the SMC Cartage Co. garage on Clark Street, which would become the site of the shooting. And on the morning of February 14th, Capone’s men would have known to find Moran’s men there — and had a motive to kill them.

But it’s likely that Moran was the ultimate target. In fact, Moran had been at the scene, but he’d simply arrived late. Upon seeing the police car outside, Moran turned and walked the other way. He got a coffee and, running into one of his associates, told him to avoid the garage because it looked like the police were raiding it. All the while, Moran had no idea that someone had just murdered seven of his men.

While Moran escaped, whoever killed his men had accomplished one goal: Moran’s grip on power weakened after the St. Valentine’s Day Massacre. His days as one of Chicago’s top gangsters had ended. But the question of who was behind the massacre remained.

Other Possible Culprits Of The St. Valentine’s Day Massacre

Most of the evidence does point to ” rel=”noopener” target=”_blank”>Al Capone — but not all of it.

Fred Burke, a known associate of Capone’s, got in a car crash and killed a police officer on December 14, 1929. He escaped, but police discovered guns in his home that were used in the massacre. But Burke, finally arrested in 1931, refused to name any names. 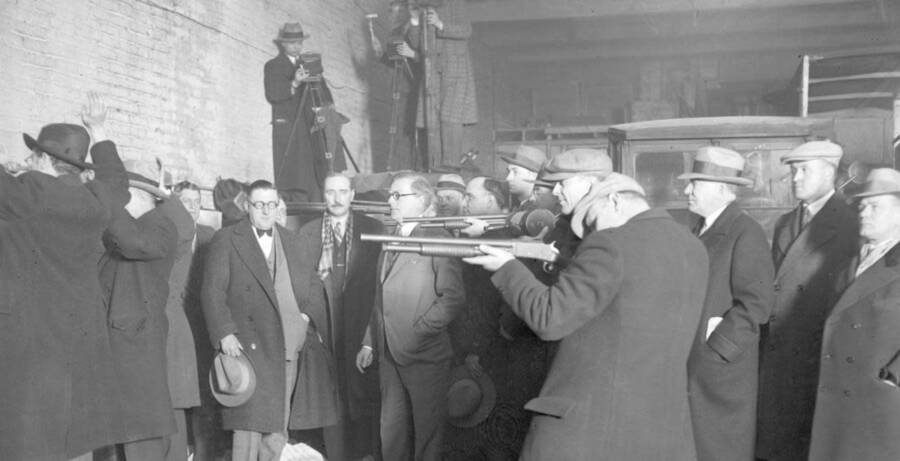 Another man, allegedly a low-level gangster associated with Capone, later claimed that Capone had planned the hit in October or November 1928. Byron Bolton said that he had acted as a look-out on the morning of the massacre. His job was to give a signal once Moran arrived. Bolton thought he saw Moran, so he gave the signal. It’s likely that he mistook Albert Weinshank for the gang leader.

For his part, Moran had no doubts about who was responsible. “Only Capone kills like that,” he said.

But was Capone responsible for the St. Valentine’s Day Massacre? 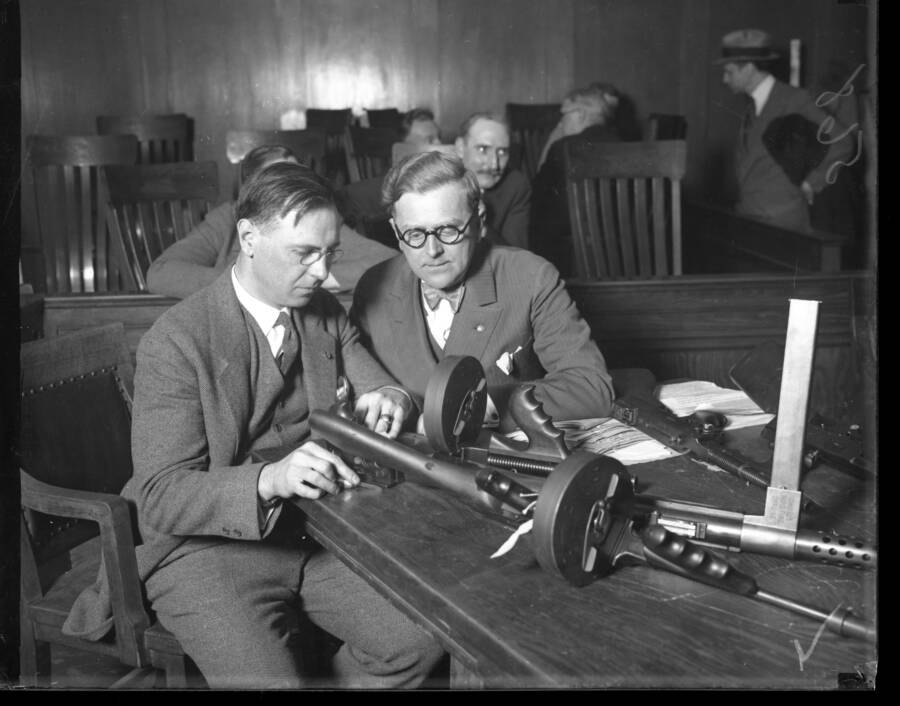 Herald & Examiner/Chicago Tribune historical photo/Tribune News Service via Getty ImagesInvestigators examine a machine gun believed to have been used during the attack.

Not everyone thinks so. After all, Moran and his men had more than one enemy.

First of all, the shooters had worn police uniforms. Could the explanation simply be that it was an attack by the Chicago police? When Sergeant Thomas J. Loftus arrived at the scene, he found Gusenberg alive among the carnage. “Cops did it,” Gusenberg said. Of course, Gusenberg had good reason to think that — he had assumed that the men in front of the garage were policemen, just as Moran had.

Investigators initially dismissed this possibility, but later wondered if it could be sound. Apparently, Moran and his men had stolen bootleg liquor from a crooked cop. Could the St. Valentine’s Day Massacre be retaliation? But if so, why had the attackers left money — thousands of dollars — in the pockets of their victims?

One theory eyed the Purple Gang, a Detroit-based gang with whom Capone had ties. Another suggested a political motive, as Capone and Moran had supported different candidates in a recent aldermanic election. Some suspected that Moran himself had ordered the hit, perhaps because he’d grown irritated with the Gusenberg brothers. Others thought that the Gusenberg brothers may have been the targets because they’d killed a young firefighter, and his family wanted revenge.

“I can name 50 motives for this crime,” grumbled David Stansbury, the lead investigator for the state’s attorney’s office. And yet, investigators kept circling back to Capone. 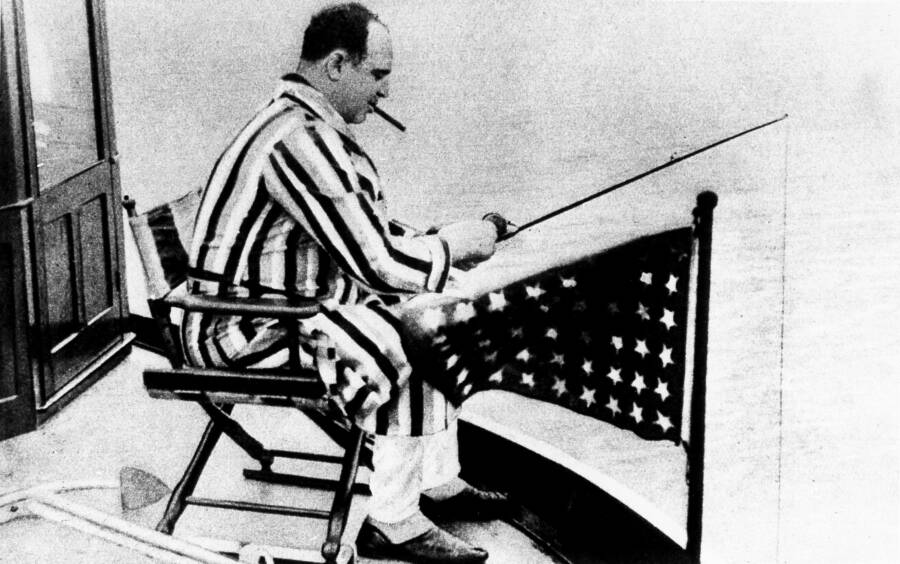 Ullstein Bild/Getty ImagesSyphilis left Capone with the mental capacity of a 12-year-old child in his final years.

It wasn’t only that Capone had motive and means. The St. Valentine’s Day Massacre was violent and shocking in a way that had become Capone’s trademark — and this put significant pressure on officials to crack down on gang activity in Chicago. In many ways, the massacre marked the beginning of the end of a certain wild west period in the underworld of Chicago, even the country as a whole.

“From coast to coast, people suddenly seemed to be reaching the conclusion that a line had been crossed, that the violence had become too much to bear,” said Capone biographer Jonathan Eig.

But still, Capone was never charged in connection with the massacre. Nevertheless, if investigators couldn’t get “Public Enemy Number One” for that, then they were determined to get him for something else.

In the end, it was actually a mundane white-collar crime that brought down the mighty Al Capone. On October 18, 1931, he was convicted of income tax evasion and soon sentenced to 11 years in prison. He was eventually released early in 1939, but by that point was already slipping into a long period of poor health largely due to syphilis. He died of cardiac arrest in 1947 at age 48.

TO the end, authorities never got anything out of him or his men about the blood-soaked shooting that occurred in that Chicago warehouse all those years ago. To this day, the St. Valentine’s Day Massacre remains unsolved.

After seeing photos of the St. Valentine’s Day Massacre and learning the story behind it, read about history’s most notorious female gangsters. Then, see more of the bloodiest mob hits of all time.