The Tommy gun was intended to be a military weapon, but as organized crime skyrocketed during Prohibition and the Great Depression, it soon became the firearm of choice for gangsters like Al Capone. 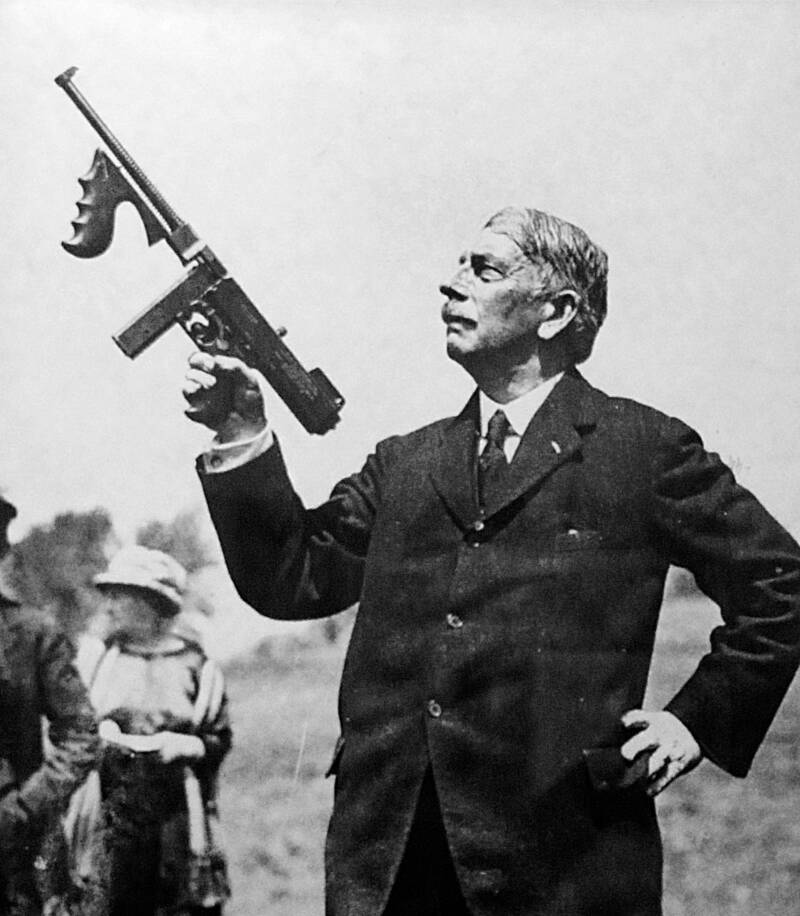 It’s been heavily featured in Hollywood’s classic gangster movies, but the Tommy gun isn’t just a pop culture artifact from a time gone by.

Originally developed by a United States Army brigadier general, it’s been used in international conflicts and gangland wars. And though the Thompson submachine gun — as it’s formally known — has fallen out of favor today, it’s still an inextricable part of both the American zeitgeist and the history of weaponry.

This is the true story of how the first semi-automatic weapon came into existence.

The Wartime Origins Of The Thompson Submachine Gun

John Taliaferro Thompson was a native of Kentucky and the son of a distinguished general. After a childhood of moving between military posts, he graduated from West Point, enlisted in the United States Army, and eventually worked his way up to the rank of brigadier general.

For much of his time in the Army, Thompson served in the Ordnance Department. During the Spanish-American War, he directed the supply of munitions to forces in Cuba. He retired from the military in 1914 after 32 years of service and began working as chief engineer for the Remington Arms Company.

As Europe plunged into World War I, Thompson noticed the need for small, automatic guns. Machine guns at the time were difficult to move and required several soldiers to operate. If he could make an automatic weapon that was easy to carry and could be operated by a single person, Thompson thought, he could change warfare forever.

When the United States entered the war in 1917, Thompson was recalled to active duty. He was awarded a Distinguished Service Medal for his success in managing the arms supply to France, and he retired again in 1918, more determined than ever to develop a weapon that would help in future wars.

By 1920, the first Thompson submachine gun, or Tommy gun, was patented and available for purchase. Thompson had hoped that the military would soon place a large order for the guns. But that didn’t happen.

Instead, the weapon slowly but surely made its way out into the public sector — and into infamy.

The Earliest Uses Of The Tommy Gun

The official motto of the Auto-Ordnance Company was “On the Side of Law and Order,” and Thompson originally intended for his invention to be used for military and law enforcement purposes.

According to the Postal Times, some of the very first Tommy guns were purchased for the United States Postal Inspection Service to protect against frequent mail train robberies. They were also useful to U.S. Marines who were fighting in the Banana Wars of Nicaragua. 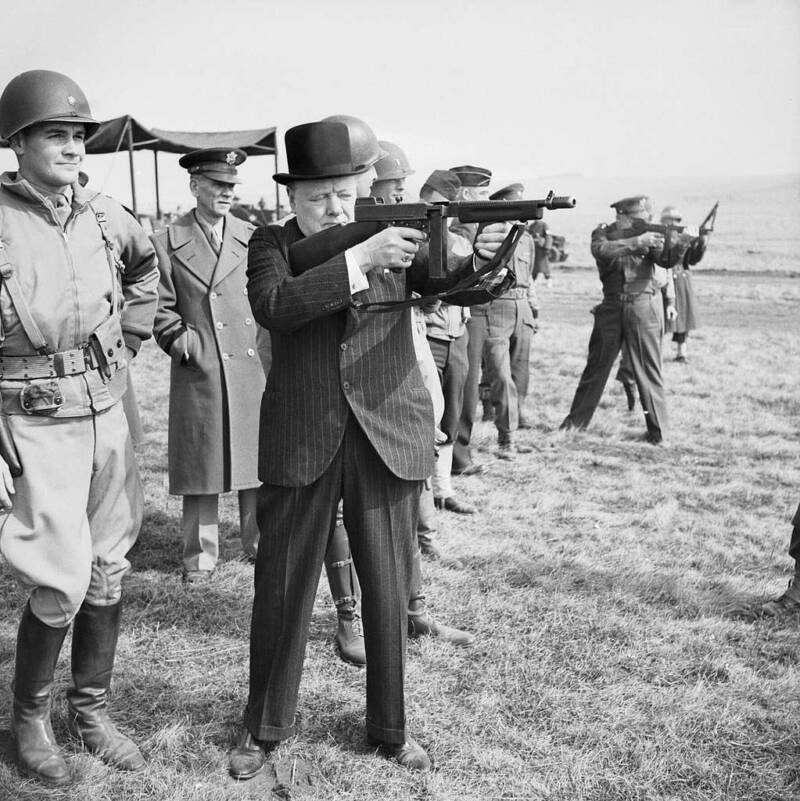 The Irish Republican Army even placed an order for the weapons, according to History Ireland. Ryan, who had financed the Auto-Ordnance Company, had connections to Irish revolutionary leader Michael Collins, and the two brokered a deal to arm members with Tommy guns. It’s unclear how many of the guns ever made it to Ireland, but in June 1921, they were used in an IRA attack in Drumcondra, Dublin.

In 1922, the Auto-Ordnance Company began marketing the Thompson submachine gun as an “anti-bandit” weapon for law enforcement. However, because of its steep price, the Tommy gun wasn’t easily obtainable for the average citizen or police department. Upon its release, the gun cost $200 — around $3,000 today. By comparison, the average Ford car cost around $400 at the time.

But the weapon soon became very popular in the criminal underworld. As Prohibition took effect and organized crime spiked, the Tommy gun became inextricably linked with the American mafia.

The weapon made its first public appearance in the hands of a gangster on Sept. 25, 1925, when Chicago bootlegger Frank McErlane used it to try to take down a competitor. According to Brown University, newspaper reports about the incident noted that the Tommy gun was a new weapon of choice for gang members across the country.

But the Tommy gun earned its place in history when it played a pivotal role in one of the most infamous organized crime massacres in United States history.

Legend has it that “thousands” of bullets from Tommy guns flew during the St. Valentine’s Day Massacre, which took place on Feb. 14, 1929. But in reality, the men who fired the guns — who did so under the orders of the notorious gangster Al Capone — only shot about 70 rounds in total, killing seven members of Bugs Moran’s North Side gang.

Over the next few years, the Tommy gun continued to gain notoriety. In 1931, a mob hitman using the gun for a drive-by shooting in Harlem injured four children and killed a baby, sparking public outcry for gun control.

As time went on, more and more infamous names became associated with the weapon. Big-time criminals liked them because by removing the buttstock and replacing the drum magazine with a 20-round clip, they could conceal them in their overcoats and fire them with one hand.

George “Machine Gun” Kelly got his nickname because the Thompson submachine gun was his weapon of choice. He used one in 1933 when he kidnapped wealthy oilman Charles Urschel from his Oklahoma City home.

Pretty Boy Floyd also wielded a Tommy gun in 1933 when he and his gang murdered four law enforcement officers at a Kansas City, Missouri train station. And Baby Face Nelson used one to take down two FBI agents on Nov. 27, 1934 — but he was also killed by a bullet from a Tommy gun that day.

John Dillinger even posed for a photo with his beloved Tommy gun, along with the pistol that he claims he used to break out of prison in 1934. 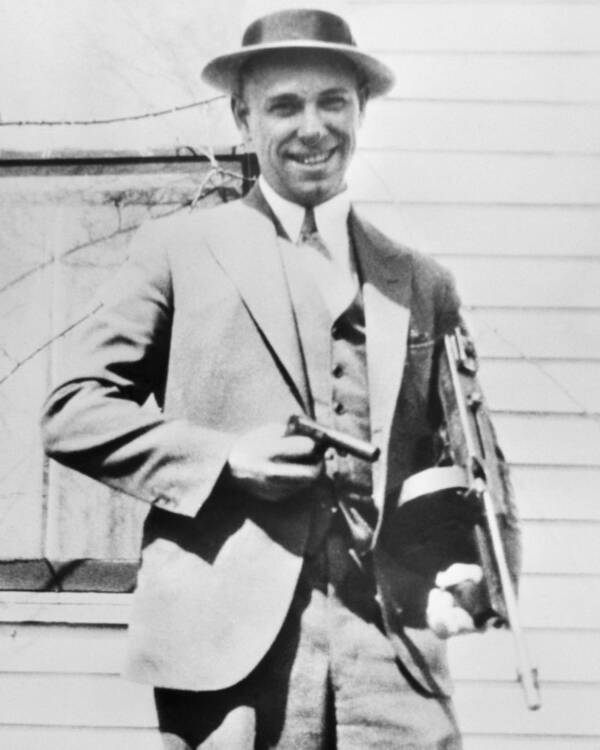 Getty ImagesJohn Dillinger posing with his Tommy gun shortly before his death in 1934.

John Thompson died in 1940, before he had the chance to see his invention in use during World War II. Before his death, he said that he regretted how his weapon had been used. “I have given my valedictory to arms, as I want to pay more attention now to saving human life than destroying it,” he wrote in a letter to his chief engineer.

“May the deadly T.S.M.G. always ‘speak for’ God & Country,” Thompson continued. “It has worried me that the gun has been so stolen by evil men & used for purposes outside our motto, ‘On the side of law & order.'”

After Thompson’s death, demand for the Thompson submachine gun grew as war exploded. The French had placed an order for 3,750 of the weapons in 1939, but by the final years of the war, nearly two million had been produced. In 1944, the M3 submachine gun, called the “Grease Gun,” replaced the Tommy gun, and production ceased.

Thanks to the quality of the workmanship, the Tommy gun is a valuable collector’s item for firearm enthusiasts today. To buy one from a store can cost up to $30,000 — and if you’d like a collector’s item, it will run you a whole lot more. According to Reuters, in 2012, the Tommy gun used by Bonnie and Clyde fetched $130,000 at auction.

For those who don’t have that kind of money lying around, take comfort in knowing that replicas can be purchased for only a few hundred dollars. Or simply turn on The Untouchables and watch the Tommy gun in action.

Now that you’ve read all about the Tommy gun, learn about the CIA’s “Heart Attack Gun,” which was invented by the agency during the Cold War. Then, discover the Schwerer Gustav, the Nazi-era war machine once considered the “biggest gun ever built.”