Explore The Unparalleled Magnificence — And Unprecedented Danger — Of Mount Everest

Standing 29,032 feet tall, Mount Everest is famous for being the highest peak in the world, but there's far more to this natural wonder than its height.

Mount Everest looms — quite literally — as one of the most fascinating places on Earth. For centuries, this mountain has inspired awe and drawn countless climbers hoping to scale its summit. One part of Everest’s allure is its striking beauty. The other is its danger.

Below, read through some of the most incredible facts about the famous peak, from the number of climbers who’ve lost their lives on its perilous slopes, to why the mountain is called “Everest” in the first place.

Where Is Mount Everest?

Mount Everest is located on the border between Nepal and Tibet, an autonomous region of China nicknamed the “Roof of the World.”

In What Mountain Range Is Mount Everest?

Mount Everest is located within the Himalayas mountain range. Specifically, the mountain can be found in the Mahalangur Himal sub-range.

How Tall Is Mount Everest? 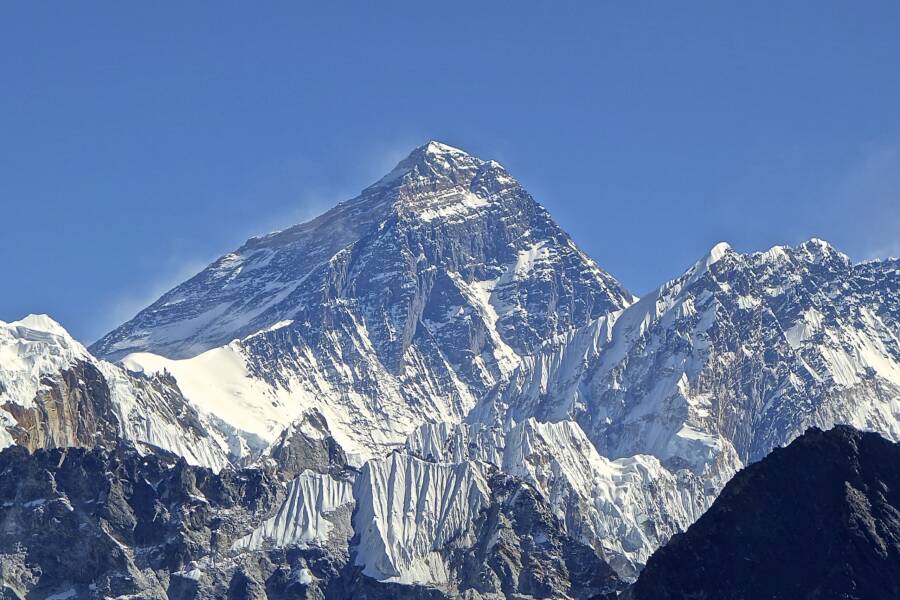 The BBC reports that a joint survey between Nepal and China in 2020 found that Mount Everest is 29,032 feet tall. That’s a bit higher than the previous survey, taken in the 1950s, which found that it was 29,029 feet tall.

The mountain’s height is also likely to change as the years go on. According to NPR, plate tectonics can make mountains grow taller over time, whereas earthquakes can shrink them in size almost immediately.

Is Mount Everest The Tallest Mountain In The World?

One of the most commonly repeated facts about Mount Everest is that it’s the tallest mountain in the world. But is it? The truth is a bit complicated.

More often than not, humans measure mountains starting at sea level. And, from sea level, Everest is definitely the tallest. But other mountains like Hawaii’s Mauna Kea are largely underwater. From sea level, Mauna Kea is “just” 13,802 feet. From its base, however, it’s 33,497 feet.

Why Is It Called Mount Everest?

In fact, the name “Everest” comes from a British man who probably never saw the mountain. Sir George Everest, the Surveyor General of India, worked for many years in Asia but likely never laid eyes on the peak that would bear his name. It was his successor, Andrew Waugh, who suggested the name.

Who Was The First Person To Climb Mount Everest?

The first person to climb Mount Everest was actually two people: Sir Edmund Hillary and his Sherpa, Tenzing Norgay. They reached the summit together as a team at 11:30 a.m. on May 29, 1953.

Though Hillary, a New Zealand mountaineer, technically reached the summit first, he and the Nepali-Indian Norgay have always shared credit. “I was not thinking of ‘first’ and ‘second,'” Norgay said of their historic climb.

“I did not say to myself, ‘There is a golden apple up there. I will push Hillary aside and run for it.’ We went on slowly, steadily. And then we were there. Hillary stepped on top first. And I stepped up after him.”

Hillary also described their summit as a cooperative effort. “Teamwork,” he explained in 2003, “got Tenzing and me to the top of Everest.”

How Long Does It Take To Climb Mount Everest?

Climbing Mount Everest is truly a mountain of a task. CNN reports that it usually takes around two months to scale the mountain. Hikers need about two weeks to reach base camp, then two more to adjust to the high altitude.

How Much Does It Cost To Climb Mount Everest?

The cost to climb Mount Everest is as steep and dizzying as the mountain itself. Climbers pay anywhere from $35,000 to more than $100,000 for the privilege of climbing the highest mountain on Earth.

That cost includes thousands of dollars for a climbing permit from Nepal or Tibet, as well as the necessary gear and hiring a Sherpa.

How Many People Have Climbed Mount Everest? 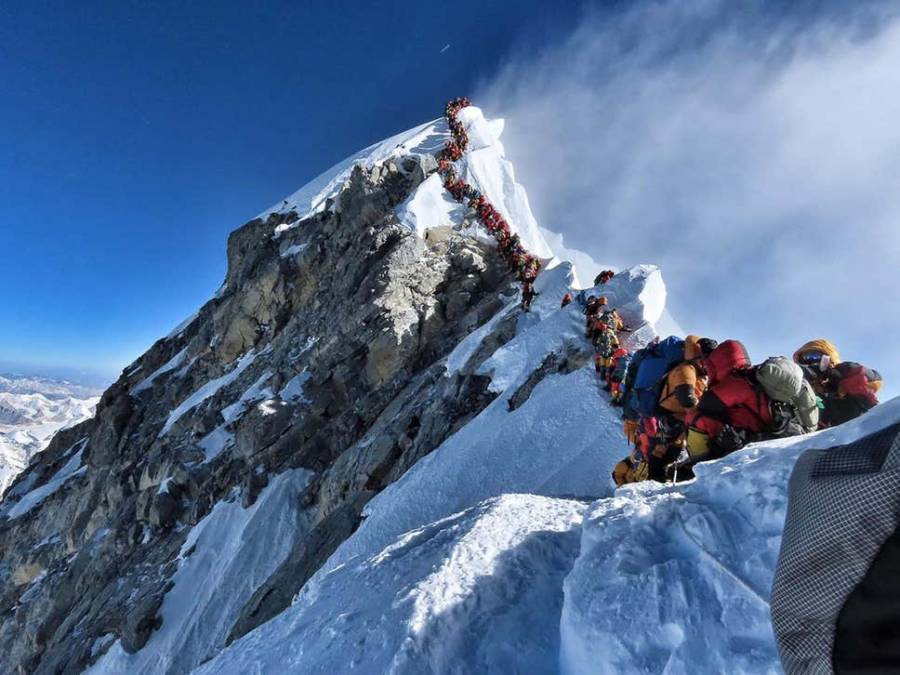 Facebook/Nirmal Purja MBE: ‘Project Possible – 14/7’Thousands of people have summited the peak, but the high level of interest has caused problems like overcrowding.

According to the Himalayan Database, 6,098 people have successfully summited Mount Everest as of 2021. Some have even made the climb more than once, since the database reports 10,656 successful summits in total.

In fact, the high number of eager climbers has caused some problems. “Traffic jams” on the mountain have resulted in unnecessary deaths, and one recent clean-up recovered three tons of trash (and the four bodies of climbers who weren’t successful in their summit).

How Many People Have Died On Mount Everest?

Hundreds of people have died on Mount Everest — the Himalayan Database reports 305 — and each climber’s death is more harrowing than the last.

The climbers who have died include Hannelore Schmatz, the first woman to perish while climbing the mountain, David Sharp, whose death was witnessed by dozens of climbers who did nothing, Rob Hall, a guide killed during a blizzard, George Mallory, whose body was found 75 years after his death, Marco Siffredi, who died snowboarding down the peak, and Nobukazu Kuriki, who died during his eighth attempt to summit the mountain.

Other climbers have only narrowly escaped with their lives. Beck Weathers, who attempted the climb in 1996 with Hall as his guide, was also caught in the storm. Though Weathers managed to survive, it was only after other climbers left him for dead — twice. In the aftermath, he lost his right arm, the fingers on his left hand, several pieces of his feet, and his nose.

Are There Dead Bodies On Mount Everest?

Yes, there are numerous dead bodies on Mount Everest. The perilous conditions on the mountain make it extremely difficult to recover them.

How Many Dead Bodies Are On Mount Everest?

Though the exact number of bodies on Mount Everest is unknown, it’s believed that there are some 200 bodies. Some of the corpses have even become famous, with other climbers using them as landmarks.

Who Is “Green Boots” That Died On Mount Everest? 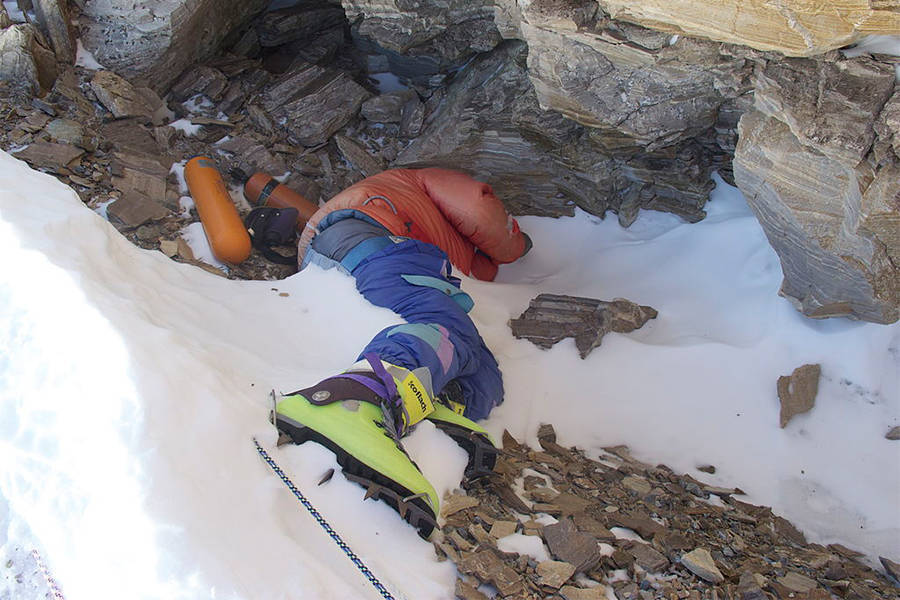 Wikimedia Commons“Green Boots” is believed to be the corpse of the doomed climber Tsewang Paljor.

One famous body belonged to a climber dubbed “Green Boots.” Believed to be the corpse of Tsewang Paljor, this grisly landmark has been on the mountain since 1996. Then, Paljor and three others attempted to become the first Indians to reach the top of Everest from the north side.

Tragically, their goal proved fatal. Though Paljor and two of his teammates reached the summit, they were caught in a massive storm during their descent. Paljor — or perhaps one of the other men — took refuge in a cave, where the body has been viewed countless times since then.

The corpse, dubbed “Green Boots,” became something of a landmark for climbers. But some report that it’s since been removed from the main path.

Who Is The “Sleeping Beauty” Of Mount Everest?

Another famous body on Mount Everest belonged to Francys Distefano-Arsentiev, who is now known as the mountain’s “Sleeping Beauty.”

Distefano-Arsentiev and her husband, Sergei, attempted to summit the mountain in 1998. But their climb came with a twist — they were determined to scale the mountain without supplemental oxygen.

Instead, both perished. Distefano-Arsentiev was found by other climbers as she lay dying, and her pale, frostbitten skin led one to remark that she looked like “Sleeping Beauty.” Upon her death, Distefano-Arsentiev’s frozen form became yet another dead body on the mountain slopes.

In 2007, however, she was given a mountain burial.

What Is Mount Everest’s Death Zone?

Mount Everest’s “Death Zone” includes the top portion of the mountain — or roughly anything that’s above 26,000 feet. There, low oxygen levels and barometric pressure can make climbers feel dangerously sluggish and disoriented. According to Science Alert, one climber described being in the Death Zone as “running on a treadmill and breathing through a straw.”

What Is The Chance Of Dying On Mount Everest?

According to Himalayan Wonders, Mount Everest is home to extreme weather and temperatures. At the summit, it never gets warmer than freezing, and temperatures can drop as low as -76 degrees Fahrenheit. The mountain’s peak is also home to some extremely violent winds.

As such, most attempt to climb the mountain in May, when the weather is warmer and milder, and the winds are less intense.

Who Is The Youngest Person To Climb Mount Everest?

The youngest person to climb Mount Everest was a 13-year-old American boy named Jordan Romero, who made the triumphant journey alongside his father and three Sherpa guides back in 2010.

Other record holders include Yuichiro Miura, the oldest person to climb the mountain at the age of 80, Erik Weihenmayer, the first blind person to ever summit the mountain, and Lhakpa Sherpa, a female Sherpa who climbed up the mountain 10 times — the most ever for a woman.

Who Has Climbed Mount Everest The Most?

Sherpa Kami Rita holds the record for the most successful summits of Mount Everest. As of May 2022, he’s made the climb 26 times.

Can You Climb Mount Everest Alone?

Officially, no, climbers can’t scale Mount Everest on their own. Nepal banned solo foreign climbers in 2018, and the Chinese Mountaineering Association has a similar rule for the Tibetan side. However, as mountaineer Alan Arnette — who has climbed Everest four times — noted on his blog:

“But like everything around Everest, there are exceptions, and most rules are never enforced.”

After reading through these Mount Everest facts, take a look at these fascinating facts about the RMS Titanic. Then, learn something new about the King of Rock ‘n’ Roll with these 22 facts about Elvis Presley.