Edmund Hillary was the first person to climb Mount Everest, but he couldn't have done it without Sherpa Tenzing Norgay. 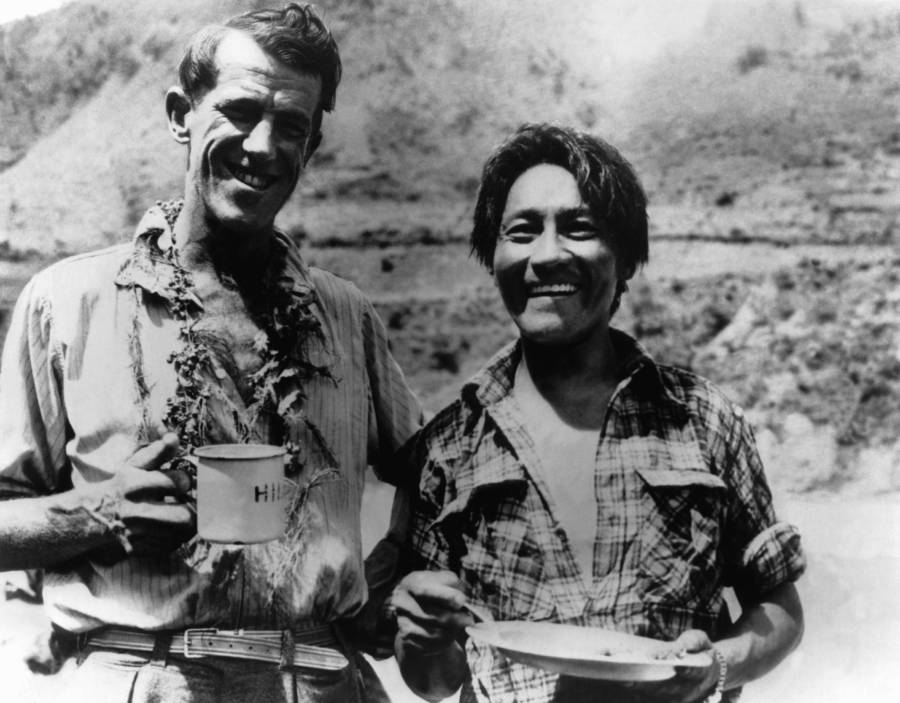 Keystone-France/Gamma-Keystone via Getty Images Edmund Hillary and Tenzing Norgay drinking tea in the Himalayas after reaching the summit of Mount Everest.

On May 29, 1953, Edmund Hillary became the first person to climb to the top of Mount Everest — but he wasn’t alone. Just after he set foot on the summit, he was joined by his climbing partner Tenzing Norgay.

A Nepali-Indian Sherpa who had been on more expeditions up the mountain than anyone in the world at that point, Norgay was the one who made Hillary’s climb possible. Though there were about 400 other people involved in the expedition, Norgay was by Hillary’s side nearly the entire time.

But even though the two men had reached the summit as a team, Hillary arguably received more attention for the accomplishment, and Norgay was often portrayed as a mere guide. In reality, Norgay was key to the success of the expedition — and some even call him the “unsung hero” of the climb.

The Early Years Of Tenzing Norgay

Tenzing Norgay was born Namgyal Wangdi, most likely in 1914, either in Nepal or in Tibet. Despite conflicting accounts of his early years, all agree that he took his first breath near the Himalayas — the area that would one day make him famous for leading Hillary to the top of the world.

In his youth, his father took him to see a Lama at the Rongbuk Monastery, after which he changed his son’s name to Tenzing Norgay. That translates to “wealthy fortunate follower of religion.” Of course, this was something his father hoped he’d become, but ultimately Norgay chose another path.

Norgay spent his early childhood in Kharta, Tibet as the 11th of 13 children. As a young boy, he’d run away from home repeatedly, each time attempting to go off on a mountaineering adventure in Kathmandu, Nepal or Darjeeling, India. After sending him to a monastery to try his hand at being a monk, his parents took him to Nepal to work for a Sherpa family in Khumbu.

As a Sherpa, a love of mountaineering was instilled in him from an early age. Khumba lies in the shadow of Everest, which the locals refer to as Chomolungma. Norgay grew up revering the mighty mountain and the goddess of the summit — and was eager to explore the legendary peak.

Though not all Sherpas are mountaineers, they usually display a knack for understanding parts of the mountain that most outsiders don’t. Their skills and their familiarity with the region allow them to serve as exceptional guides for those hoping to summit the dangerous Himalayan mountaintops. 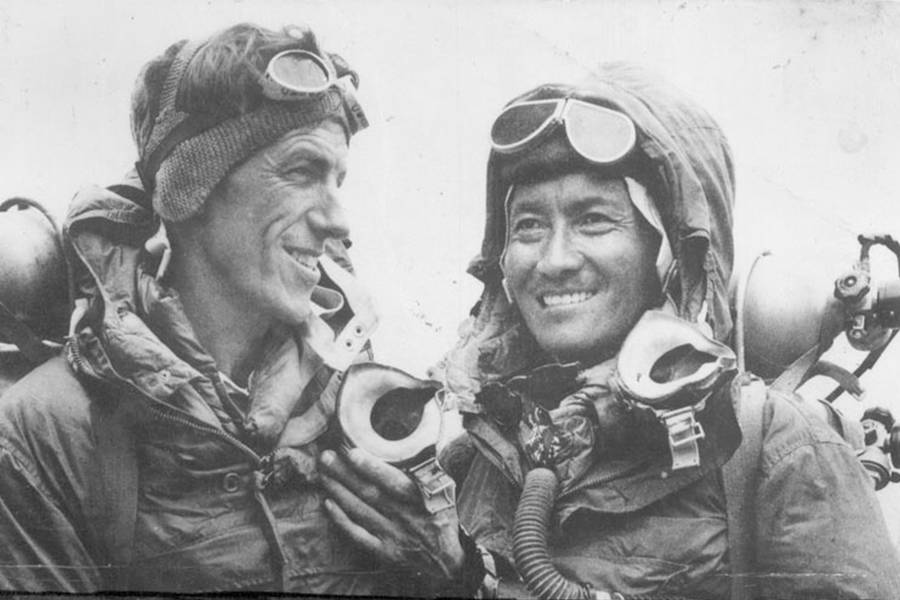 Wikimedia CommonsEdmund Hillary and Tenzing Norgay suited up for their historic climb.

Norgay got his first shot at an Everest adventure when he was just 20 years old in 1935 — during an expedition led by English mountaineer Eric Shipton. It was by sheer chance that Norgay even went. At the last minute, two other Sherpas failed their medical tests, and Norgay stepped in to replace them.

Though Shipton’s team didn’t reach the summit (as it was just a reconnaissance mission), the group was ultimately successful in their endeavor. Throughout the rest of the 1930s and the early 1940s, Tenzing Norgay would accompany several more climbs up Everest, including one in 1936 by famed British mountaineer John Morris.

In 1947, Norgay took part in a Swiss expedition, marking his fourth time climbing Everest. Later, he accompanied two more attempts: a U.S. expedition in 1950 and a British reconnaissance mission in 1951. Then in 1952, Norgay accompanied yet another Swiss expedition, this time making it the highest up the mountain that anyone had gone at that point — 28,199 feet. The next year, he made it 16 feet higher with the same Swiss team.

Before Norgay was 40, he’d climbed Everest more times than most anyone. Though he considered being made an official member of the 1952 team “the highest honor,” there was still something he had yet to achieve: reaching the summit. But in just a few short months, he’d do just that.

The Historic Summit Of The Mighty Mountain 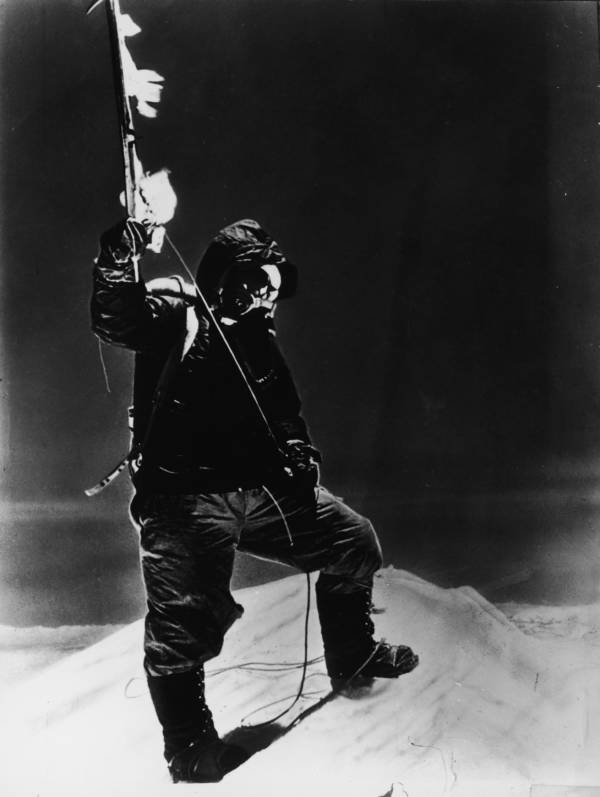 In 1953, British Army Colonel John Hunt organized the ninth mountaineering expedition to attempt to summit Everest. Though Eric Shipton had been the top pick for the endeavor, Hunt was given the job due to his military leadership. This was going to be successful — come hell or high water.

Though the expedition’s two most famous members would later become Tenzing Norgay and New Zealander Edmund Hillary, there were actually 400 people present on the climb. Most of them were porters and Sherpa guides. Altogether, the massive group carried about 10,000 pounds of luggage.

One of the most harrowing moments of the expedition happened just before the climb began. Hillary slipped while scaling a wall and nearly fell into a crevasse — until Norgay saved his life. Norgay, trained by his years scaling the Himalayas, reacted quickly and secured Hillary’s rope with his ice axe.

Hillary later said if Norgay hadn’t responded in time, he would’ve surely hit the bottom of the chasm and “smash[ed] into smithereens.” With that terrifying experience out of the way — and a horrific death avoided — Hillary and Norgay became fast friends as well as climbing partners.

For more than two months, the Hunt expedition slowly climbed the mountain. They began by setting up base camp at the South Col (about 25,000 feet up), from which smaller groups and pairs set out for the summit. After one pair’s failed attempt, Hunt set Norgay and Hillary out.

After scaling a 40-foot rock face that was later named Hillary Step, the pair reached the summit at 11:30 a.m. on May 29, 1953. Initially, they had few words for their experience atop the mountain. “A few more whacks of the ice axe in the firm snow, and we stood on top,” Hillary explained.

Once they reached the top, Hillary posed Norgay for a photo with his ice axe, but refused a photo himself. Next, photos were taken of the mountain from the top looking down to authenticate their climb, and then they were done. They spent about 15 minutes at the top before heading back down.

Who Was The First Person To Climb Mount Everest? 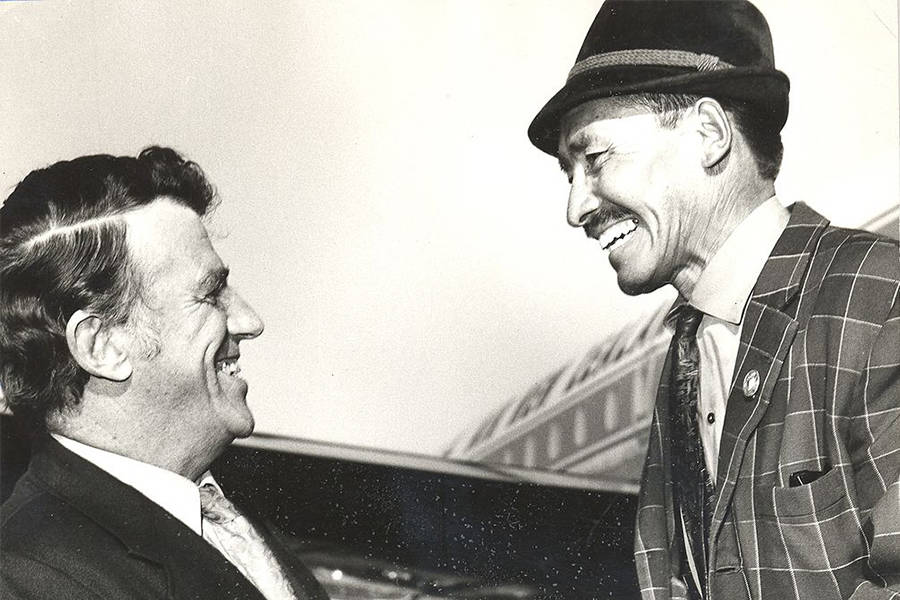 Wikimedia CommonsEdmund Hillary and Tenzing Norgay greet each other, still friendly years after their climb in 1971.

Though Hillary and Norgay had reached the summit together, the press was determined to name the true first person to climb Mount Everest. Initially, both of them refused to say who “won.” This was meant to emphasize their success as a team — but it only made people more curious.

Norgay was under additional pressure as both India and Nepal were eager to claim him as “theirs” — since he was likely born in Nepal but made a home in India. The controversy became so heated that some extremists threatened to kill journalists if they used the “wrong” nationality.

In the meantime, Hillary arguably received more attention for the climb than Norgay. He was knighted by the Queen, while Norgay was given a medal. In 2013, Norgay’s grandson spoke out about this disparity: “I think my grandfather should have been knighted. He was a member of the expedition, not just a Sherpa. They just gave him a bloody medal.”

Some Brits also protested this controversial decision. In 1953, The Guardian weighed in: “Would it not be wiser, since Sir Edmund Hillary and he stood on the summit side by side to honour them in the same way? Honorary knighthoods conferred on foreigners are rare but not unknown.”

Aside from being knighted, Hillary also received the honor of having multiple rock formations named after him in the Himalayas. Most notable was Hillary Step — which may have been transformed into more of a slope than a step after a powerful earthquake hit the mountain decades after the climb.

However, as the years went on, Norgay began to receive more recognition for his achievement. He also accepted multiple awards in Nepal and India until he died in his early 70s of a chronic lung problem in 1986.

Today, climbers of Mount Everest are far more aware of Norgay’s involvement. In 2013, Norgay was awarded his own formation just as Hillary had been before him. But while the rest of the world was a little behind in giving Tenzing Norgay his due, Colonel Hunt certainly wasn’t. From the moment he was asked about the first person to climb Mount Everest, he always gave the same answer: “They reached it together. As a team.”

Years after the climb, Norgay finally revealed the true first person to climb Mount Everest in an awe-inspiring account of the experience: “A little below the summit Hillary and I stopped. We looked up. Then we went on. The rope that joined us was 30 feet long, but I held most of it in loops in my hand, so that there was only about six feet between us.”

Norgay continued, “I was not thinking of ‘first’ and ‘second.’ I did not say to myself, ‘There is a golden apple up there. I will push Hillary aside and run for it.’ We went on slowly, steadily. And then we were there. Hillary stepped on top first. And I stepped up after him.”

After reading about Tenzing Norgay, check out the story of David Sharp, who died on Everest while 40 people passed him by. Then, learn about Yuichiro Miura, who broke the Everest record for the oldest climber — twice.