From his stillborn twin brother to his surprising last words, these facts about Elvis Presley will make you see this legendary artist in a whole new light. 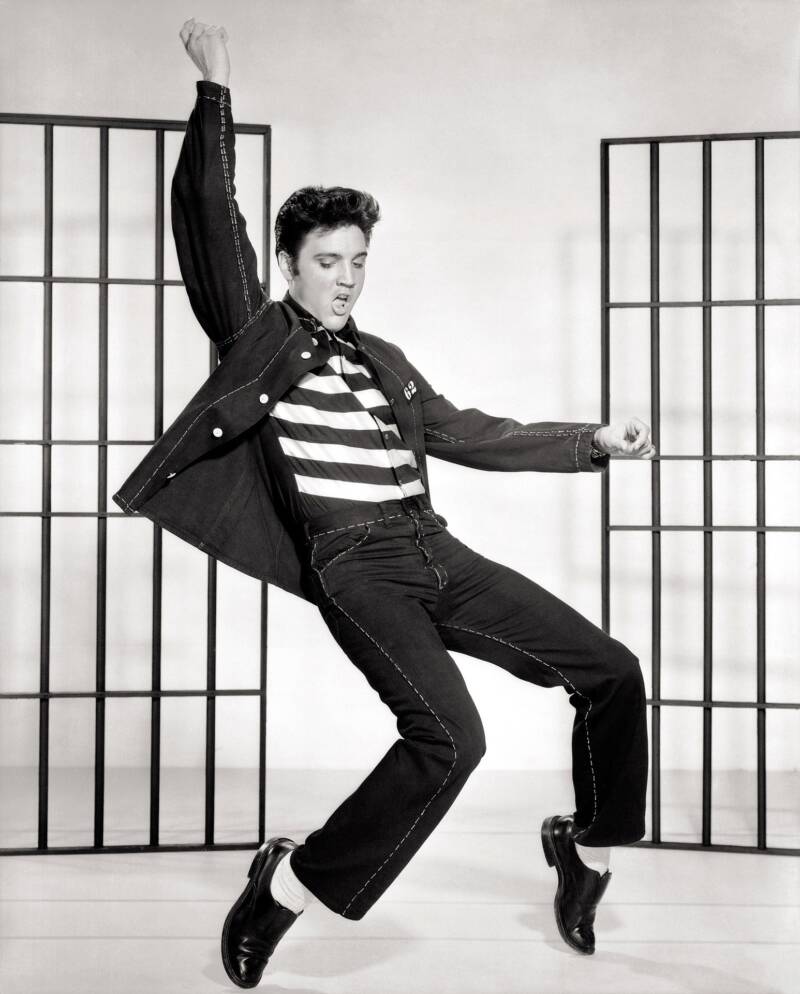 PixabayElvis Presley showing off his famous dance moves in 1957.

Elvis Presley exploded onto the music scene in the 1950s, to the delight of young people and to the horror of their parents. But who was the so-called “King of Rock ‘n’ Roll”? These facts about Elvis Presley help paint a clearer picture of this American music icon.

Below, find some of the most frequently asked questions about Elvis Presley — from his controversial marriage to his shocking death.

Who Is Elvis Presley?

Elvis Presley was an American rock ‘n’ roll singer whose deep voice, striking dark hair, and dance moves thrilled generations of Americans. He starred in more than 30 successful films and has globally sold over 1 billion records.

When Was Elvis Presley Born?

Elvis Aaron Presley was born on January 8, 1935, to Gladys and Vernon Presley. The future rock star spent his early years in a humble two-room house, which was built by his father and his uncle.

Elvis was known for being extremely close with his mother, sleeping in the same bed as her until he was a teenager, and often communicating with her in baby talk. However, he also shared a close relationship with his father.

Where Was Elvis Born?

Elvis was born in Tupelo, Mississippi. He and his parents moved to Memphis, Tennessee, when Elvis was 13 years old.

Why Was Elvis Named Elvis?

Elvis’ first name comes from his father, Vernon Elvis Presley. However, the origins of Vernon’s middle name remain unclear to this day. One theory is that the name was an homage to a 6th-century Irish saint.

Was Elvis A Twin?

Yes, Elvis was born at the same time as his brother, Jessie Garon Presley. However, Jessie was tragically born stillborn. Elvis did not have any other brothers or sisters and was raised as an only child.

When Was Elvis Popular? 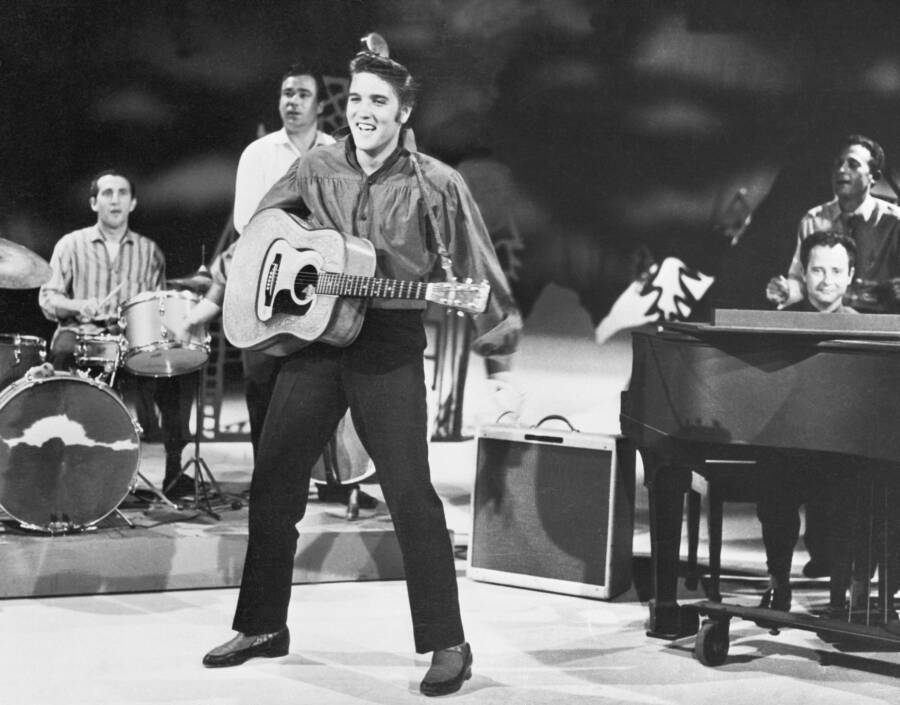 Bettmann/Getty ImagesElvis Presley rehearsing for The Ed Sullivan Show in 1956. One interesting fact about Elvis Presley is that during one of his appearances on this show, television cameras only showed him from the waist up to hide his shaking hips.

Elvis Presley shot to fame following the release of his 1956 single “Heartbreak Hotel.” His popularity continued throughout the 1960s and up until his death in 1977. But people certainly didn’t stop listening to his songs just because he was gone. And many fans (both old and new) still enjoy his music today.

His massive reach impressed even other famous singers. As his friend and occasional collaborator Johnny Cash wrote in his autobiography: “Elvis was so good. Every show I did with him, I never missed the chance to stand in the wings and watch. We all did. He was that charismatic.”

Did Elvis Write Any Songs?

Although Elvis recorded hundreds of songs throughout his career, he was not a songwriter. One author, Ken Sharp, noted that Elvis did co-write a couple of songs, including the tune “That’s Someone You Never Forget.” But according to Sharp, Elvis’ true magic lay not in penning song lyrics but in giving songs “his own distinctive personal interpretation.”

How Tall Was Elvis Presley? 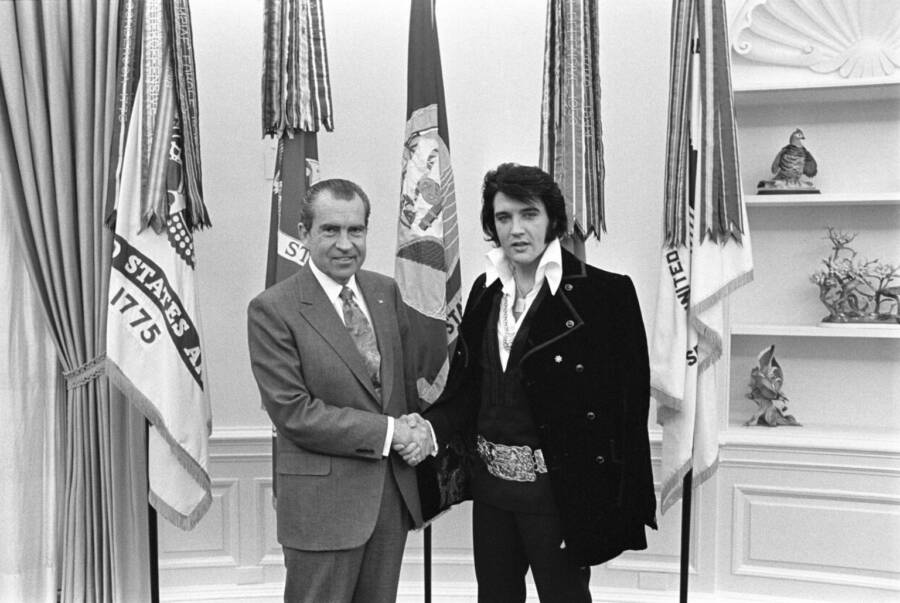 U.S. National ArchivesOne of the most bizarre facts about Elvis Presley is that he met President Richard Nixon in 1970 — just so he could get his hands on a badge from the Federal Bureau of Narcotics and Dangerous Drugs.

Yes, Elvis Presley met Richard Nixon on December 21, 1970 — to the shock of just about everyone working at the White House at the time. The King of Rock ‘n’ Roll descended upon Washington, D.C. in the hopes of securing a badge from the Federal Bureau of Narcotics and Dangerous Drugs.

Nixon obliged, giving him an “honorary” badge that didn’t actually hold any power, and Presley declared his full support of Nixon’s presidency.

How Old Was Priscilla When She Married Elvis?

On May 1, 1967, Elvis Presley married Priscilla Beaulieu. They had first met when Elvis was stationed in West Germany while serving for the U.S. Army. At the time, the rock star was 24 years old — and she was just 14. After a seven-year courtship, the couple married when Priscilla was 21 years old.

Around the time when the two of them first met, Elvis reportedly told one of his friends that Priscilla was “young enough that I can train her any way I want.” And even though Priscilla’s parents were initially suspicious about Elvis’ intentions with their teenage daughter, he apparently convinced them to accept the pair’s relationship and later marriage.

But their marriage didn’t last long, as Priscilla would eventually tire of being — as she put it — “Elvis’ living doll.”

Graceland is located at 3764 Elvis Presley Boulevard in Memphis, Tennessee. Elvis and his family lived at the estate for 20 years, from the early days of his career in 1957 to his death in 1977. While Graceland wasn’t Elvis’ only house (he had nine total), it was by far his most famous residence and it was widely considered to have been his main home base.

A few years after Elvis’ death, Graceland opened to the public as a museum in 1982. While fans still enjoy visiting the home to this day, some rooms remain off-limits to tourists — leaving many to wonder just what is inside.

No, Elvis Presley is not still alive. However, one conspiracy theory claims that he never died but faked his death to escape the spotlight. Some conspiracy theorists are even convinced that Elvis is still hiding out at Graceland to this day — perhaps in one of the mysterious rooms that don’t allow visitors.

When Did Elvis Presley Die?

How Old Was Elvis When He Died?

Elvis was just 42 years old when he died.

Where Did Elvis Die?

Elvis died at Graceland, where he’d lived for the last 20 years of his life.

What Were Elvis Presley’s Last Words? 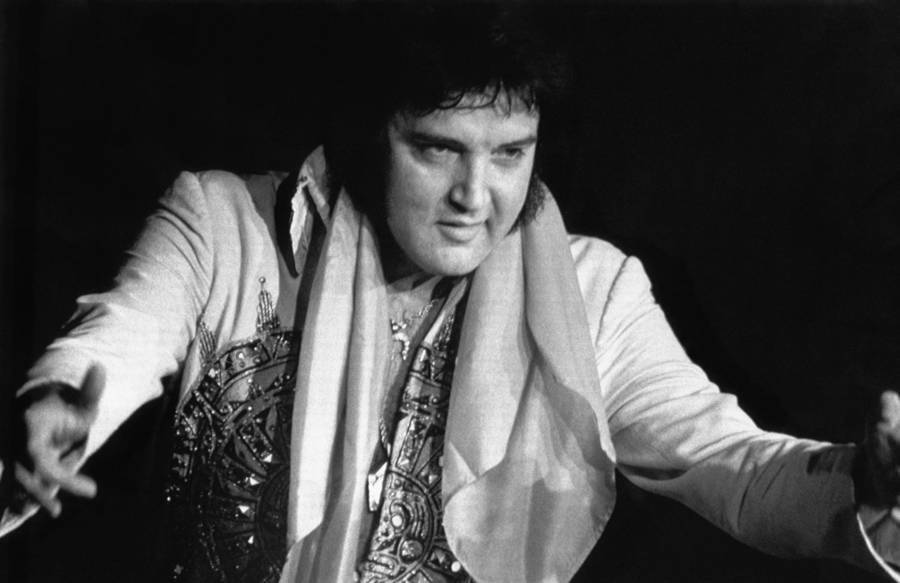 Getty ImagesThe King of Rock ‘n’ Roll during one of his last concerts in June 1977.

According to Elvis’ then-fiancée, Ginger Alden, he told her, “I’m going to the bathroom to read.” In response, Alden told him not to fall asleep while he was in there. And so Elvis’ last words were: “Okay, I won’t.”

He then took a book titled The Scientific Search for the Face of Jesus into the bathroom with him — and never came out again.

How Did Elvis Die?

Officially, Elvis Presley died of cardiac arrhythmia. However, his toxicology report also showed high levels of Dilaudid, Percodan, Demerol, codeine, and Quaaludes. The rock star had abused a number of drugs for years, and it’s believed that his addictions played a major role in his death.

However, his unhealthy diet may have also played a role. Known for his legendary appetite, Elvis often indulged in rich dishes. He once even flew from Memphis to Denver just so he could eat a “Fool’s Gold Loaf” sandwich — which involved stuffing a jar’s worth of peanut butter, a jar’s worth of jam, and a pound of bacon inside a hollowed-out loaf of French bread.

Did Elvis Die On The Toilet?

Yes, Elvis died on the toilet. Doctors suspect that he was straining to pass a bowel movement, which put enormous pressure on his heart.

How Much Is Elvis Presley Worth?

However, the King of Rock ‘n’ Roll continues to make money even in the afterlife. One little-known fact about Elvis Presley is that he’s one of the highest-paid dead celebrities. In 2020 alone, he earned $23 million, some of which came from visits to his home-turned-museum, Graceland.

Who Gets Elvis Presley’s Royalties?

Most royalties from Elvis Presley’s songs go to RCA records, thanks to a deal brokered by Elvis’ manager, Colonel Tom Parker. However, royalties from songs recorded after the RCA deal went to Elvis’ daughter, Lisa Marie Presley, after she turned 25 years old in 1993 and was able to inherit the money.

Where Is Elvis Buried? 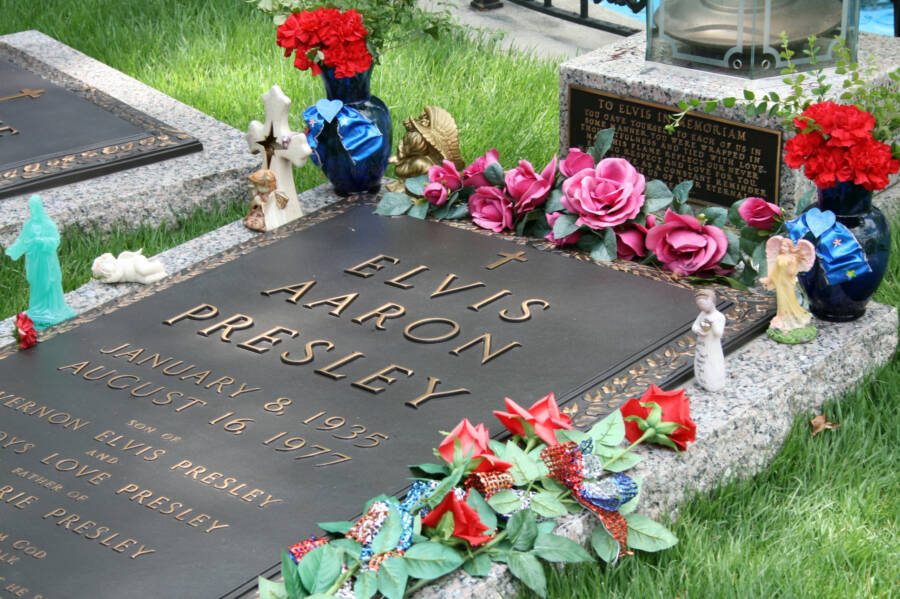 Wikimedia CommonsThe King of Rock ‘n’ Roll is buried at Graceland, alongside a number of family members.

Elvis is buried at Graceland. He was laid to rest alongside several family members, including his mother, his father, and — perhaps most tragically — his only grandson, Benjamin Keough, who killed himself at age 27 in 2020.

How Old Would Elvis Presley Be Today?

After reading these interesting facts about Elvis Presley, learn about the rock ‘n’ roll groupies who changed music history forever. Then, discover how Elvis encouraged Americans to take the polio vaccine.