The Horrific Story Of The Dunblane Massacre — And How It Changed Gun Laws In The U.K. Forever

The 1996 Dunblane massacre was the deadliest school shooting in the history of the modern United Kingdom. But it was also the last. 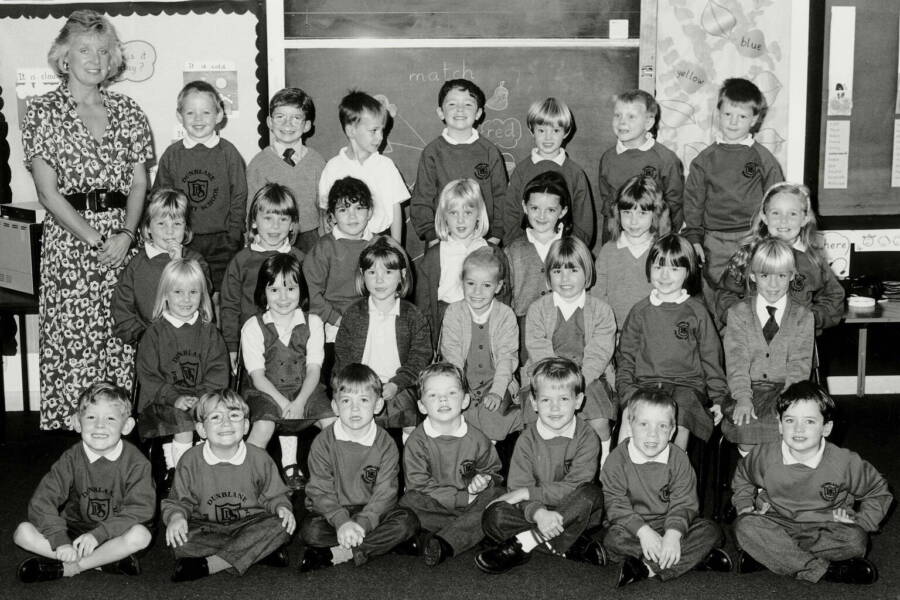 Mathieu Polak/Sygma/Getty ImagesThe five and six-year-old children targeted during the shooting, with teacher Gwen Mayor on the left.

On the morning of March 13, 1996, teachers and children of Dunblane Primary School in Scotland prepared for a normal day. Instead, a 43-year-old gunman named Thomas Hamilton entered the grounds and committed what is now known as the Dunblane massacre, the most devastating school shooting in the history of the U.K.

By the time the gunfire stopped, 15 students and one teacher were dead. One more student would later die on the way to the hospital. Another 12 students had been critically wounded. Hamilton was also dead of a self-inflicted gunshot wound.

The first modern mass shooting in the U.K. happened in 1987 and led to a raft of gun legislation, including banning semi-automatic weapons and establishing mandatory registration for shotgun owners. But Dunblane was different. These were children.

Mourning families and traumatized residents wasted no time in calling for stricter gun control. And by the end of 1997, British parliament would effectively ban all handguns from private use. Learn more about this tragic school shooting utterly changed gun ownership law in the U.K.

When Thomas Hamilton entered Dunblane Primary School, in Dunblane, Scotland, he did so with four handguns and 743 rounds of ammunition. He initially fired two shots into the assembly hall and the girls’ bathroom, before turning his attention toward the gym — where 28 children were readying for class. 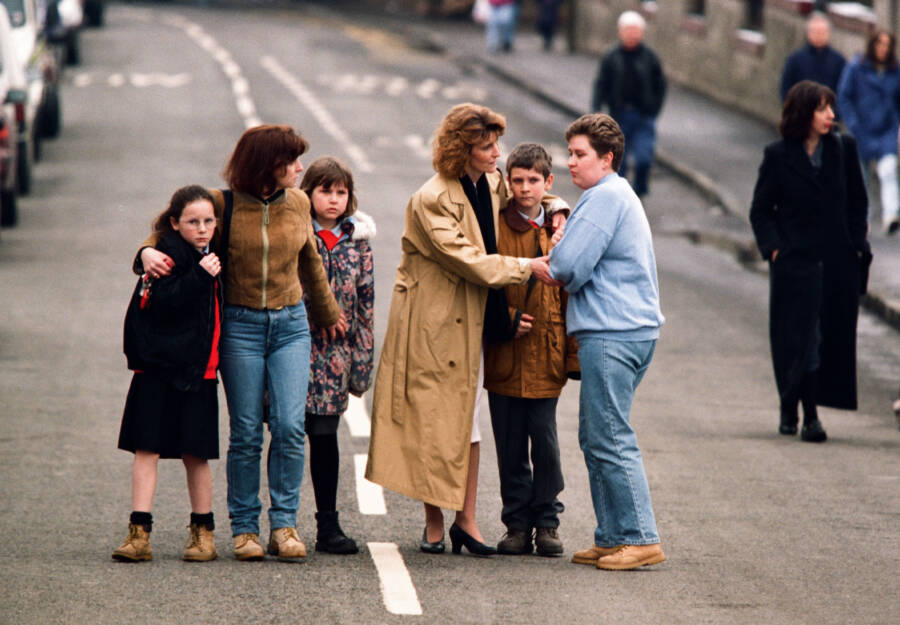 Colin McPherson/Corbis/Getty ImagesParents and children outside Dunblane Primary School after the shooting.

The later government inquiry found that Hamilton “fired indiscriminately and in rapid succession.” He first hit three teachers, including 43-year-old mother Gwen Mayor who died protecting her students. After wounding several children and killing one, he “walked in a semicircle, systematically firing 16 shots.”

Hamilton was simply walking toward each child of his choosing and shot one round into each at point-blank range. Leaving the gym, he sprayed a hail of bullets at anyone running through the hall, before entering a classroom.

“I looked over and saw the gunman,” said Steven Hopper, who was 11 years old at the time of the Dunblane massacre. “He was coming toward me, so I just dived under my desk when he turned and fired at us. The firing was very fast, like someone hitting a hammer quickly. Then there was a few seconds of pause and he started again.”

Hamilton then returned to the gym, fired indiscriminately into classrooms and closets as walked. When he got back to the gym, he shot himself in the head.

Thomas Hamilton’s rampage lasted no longer than four minutes, but by the time it was over the casualties totaled 32 — 16 students and one teacher were dead, and another 12 students and three staff members were wounded. And Hamilton was dead. He had fired over 100 bullets before police and parents arrived at the scene. 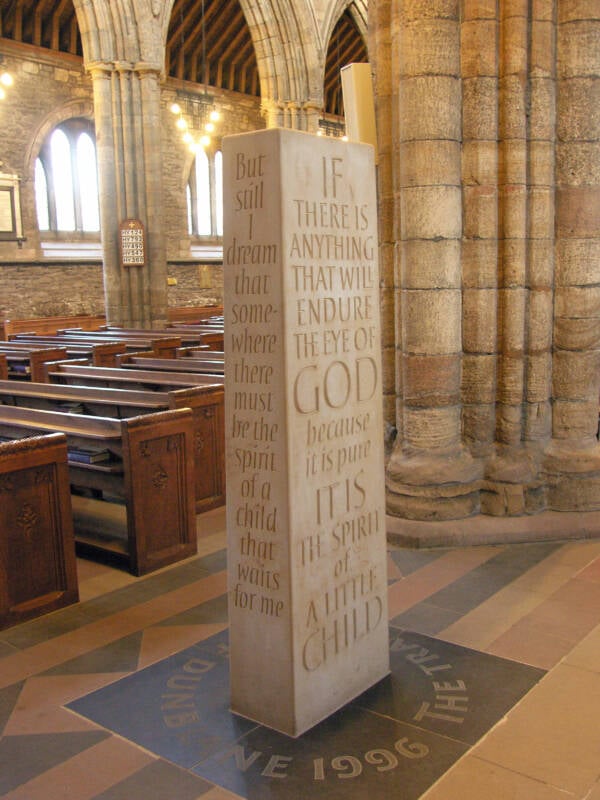 Almost immediately, parents began asking why Hamilton had been able to obtain his firearms. He had been known since the mid-1970s as a paranoid and resentful man, who bore a grudge against several prominent members of the community for insinuating inappropriate behavior towards young boys.

Police never uncovered any evidence for illegal behavior through their own investigations, nor did those of the city council and school district. But Hamilton claimed he had lost business in his kitchen-fitting company as a result of being labeled a “pervert.”

The inquiry into the shooting released in October 1996 also showed that because of his known grievances, police had raised questions about his fitness to own firearms as early as 1991, yet still renewed his licence every year. That revelation may have been the last straw for parents.

The End Of Shootings In The U.K.

In 1987, the nation suffered its first modern mass shooting. A gunman in Hungerford, England killed 16 people, including a police officer, in several locations around the city. This led to the U.K.’s first modern gun restrictions in 1988, which banned pump action and self-loading rifles. 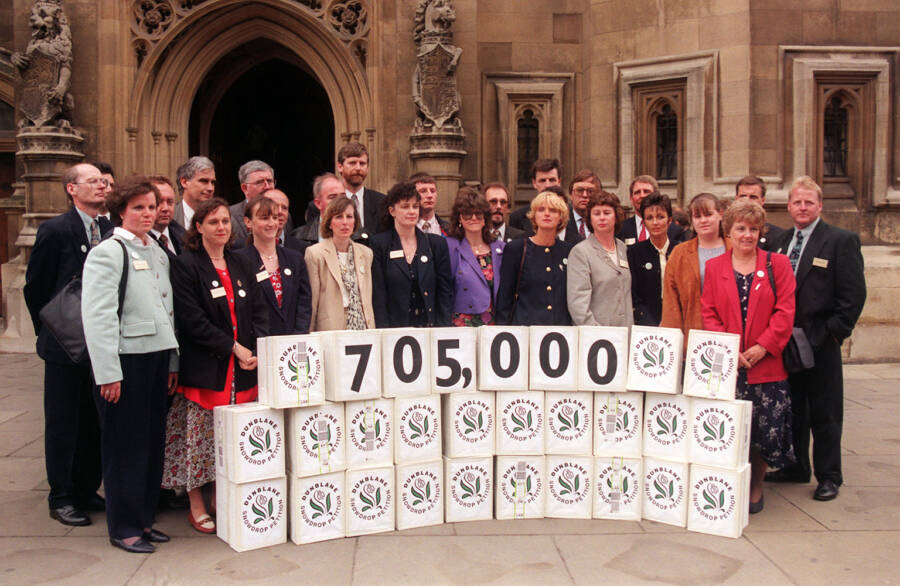 Photo by PA Images via Getty ImagesParents of children killed in the Dunblane massacre in front of the House of Commons with 705,000 signatures for gun reform on July 3, 1996

But after Dunblane, it only took a couple of months for outraged and determined residents of Dunblane to rally around far stricter gun reform. They launched the Snowdrop Campaign, named after a spring flower that was in bloom in March 1996, and gathered over 1 million signatures for their cause by the end of the year.

Parliament acted fast, and passed legislation banning private ownership of all handguns larger than .22 caliber in February 1997. An addendum in December extended that law to virtually all handguns of any kind, with exceptions for guns of historic or aesthetic value, sporting starter and flare guns, and airsoft pistols.

It also added further security strictures, making it harder for anyone to pass ownership requirements.

Following these regulations, gun deaths in the United Kingdom plummeted. The Dunblane massacre was the last school shooting in Great Britain.

And in 2018, following the Parkland, Florida school shooting of 2018, survivors of the Dunblane massacres wrote their Floridian brethren a letter in solidarity.

“We want you to know that change can happen,” it read.

“It won’t be easy, but continue to remind everyone of exactly what happened at your school and the devastation caused by just one person with one legally owned gun. Never let anyone forget.”

After learning about the Dunblane massacre, read about David Copeland and the London nail bombings. Then, explore the full story of the Columbine High School shooting.