David Copeland: The Neo-Nazi Terrorist Behind The London Nail Bombings

Over the course of 13 days in 1999, David Copeland bombed three minority communities in London — to try to ignite a race war. 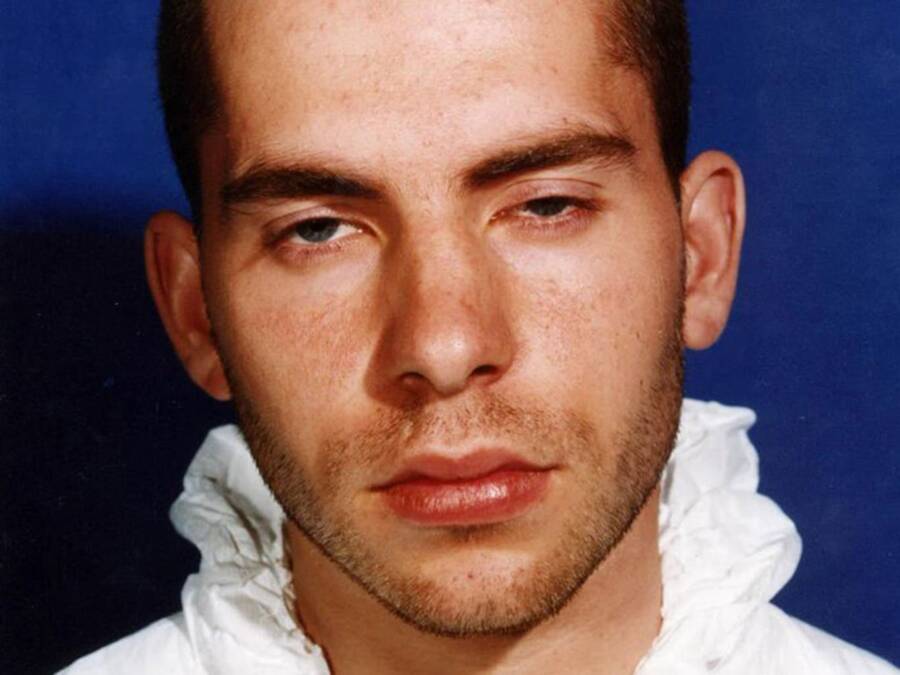 On April 30, 1999, a suspicious bag was found in Admiral Duncan, a historic gay pub in London. The pub manager, Mark Taylor, knew something was amiss and began to lead his customers outside. But then, a bomb inside the bag suddenly exploded, injuring Taylor and 78 other people. Tragically, three died from their wounds — including a pregnant woman.

Even more disturbing, two other places in London had been bombed earlier that same month. The first bomb had exploded in a Black community, the second had gone off in a Bangladeshi neighborhood, and now the third attack was happening at a gay bar. It was soon discovered that all of these bombs had been left by the same man: David Copeland.

Over the course of 13 days, Copeland had unleashed a calculated spree of terrorism in the city. Specifically targeting minority communities, he planted homemade bombs that were filled with nails — hoping to cause maximum damage. Just 22 years old at the time, Copeland was a self-described neo-Nazi militant and homophobe who wanted to “stir up a racial war.”

While Copeland failed in his ultimate mission, he still left a horrific mark of humanity’s worst traits scattered all throughout London. In total, the 1999 London nail bombings left 140 people injured and robbed three others of their lives. And as chronicled in the Netflix documentary Nail Bomber: Manhunt, those who survived were changed forever. 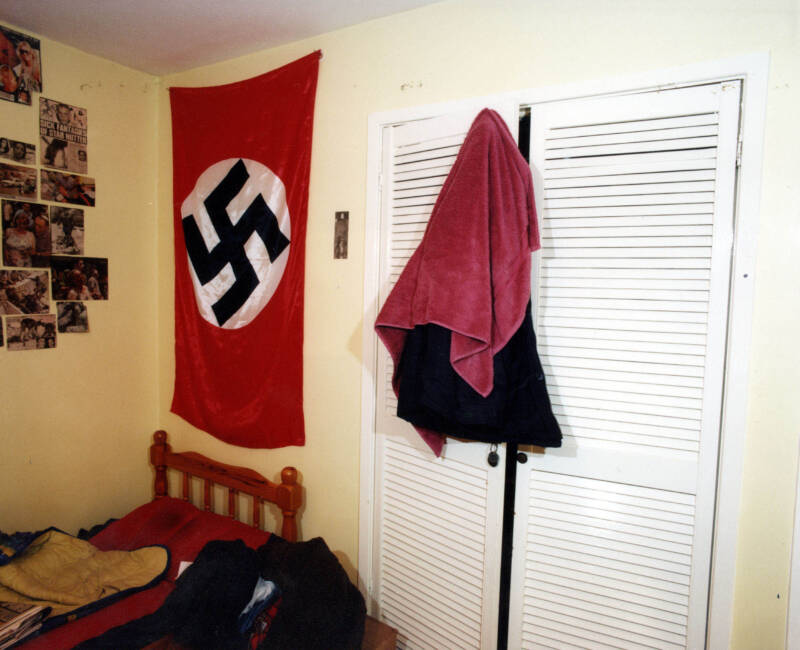 PA Images/Getty ImagesDavid Copeland’s bedroom, which he decorated with Nazi flags and newspaper clippings of past bombings.

David Copeland was born in West London, England on May 15, 1976. He was allegedly bullied for his small stature on a regular basis and nicknamed “Mister Angry” during his childhood. He left school at age 16.

While Copeland began to drink and experiment with drugs, he only had a few run-ins with the law. He bounced from job to job, never sticking with one thing for too long. But despite living in relative obscurity, he was secretly on a dangerous path toward extremism. And after his murderous campaign in 1999, the sordid details of his private life came to light.

After he was arrested for the bombings, Copeland claimed that he had long fantasized about being reincarnated as an SS officer working for Adolf Hitler. Even when he was in school, he often dreamt about killing his classmates. 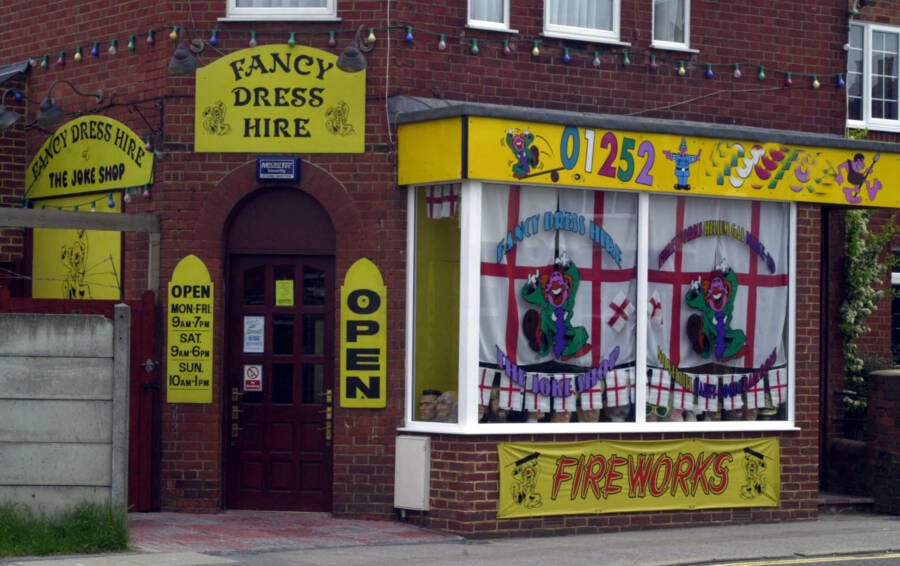 In 1997 — two years before the London nail bombings — Copeland joined an extremist political group called the British National Party (BNP). His racist and homophobic rhetoric saw him quickly rise in the ranks, and he was soon photographed with the party’s founder, John Tyndall.

While he was still in the BNP, Copeland was using the internet to research how to make bombs from fireworks. He also began reading racist and anti-Semitic literature from extremist groups in the United States.

In 1998, Copeland took things a step further and joined a neo-Nazi group called the National Socialist Movement. He would become the leader of this group just weeks before he carried out the 1999 London nail bombings.

Meanwhile, he confided in his doctor that he was “losing his mind.”

Inside The 1999 London Nail Bombings 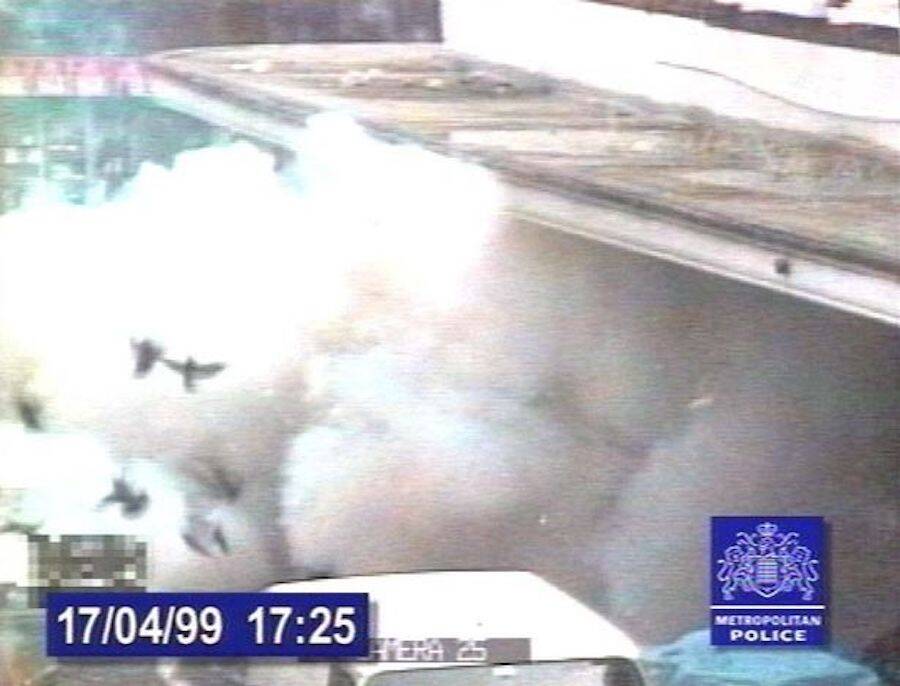 Met PoliceThe first bomb exploded near the Brixton Market in South London, an area known for its large Black population.

On April 17, 1999, Sandra Mills was walking near the Brixton Market in South London when a bomb suddenly went off. To her horror, it was a nail bomb — which sent “thousands of nails flying in all directions.” David Copeland’s first attack had targeted the Black community that lived in the area.

“I remember hearing a loud, deafening blast, like a huge gust of wind that blew all the windows out,” said Mills. “My heart sank to my stomach in sheer panic and I just stood still. After what seemed like an eternity of silence, I saw an injured man lying in the road, which was covered in glass. I ran to his aid and saw he had nails lodged in his legs.”

The man was one of 48 people injured in the bombing that day. While no one was killed in the first attack, many suffered from horrific wounds — including a one-year-old who was left with a nail lodged in his skull.

Sir Hugh Orde of the Met Police ordered authorities to analyze “miles and miles” of available CCTV surveillance footage to find any potential leads. Orde immediately suspected that racism may have played a role in the bombing — and he was soon proven correct. 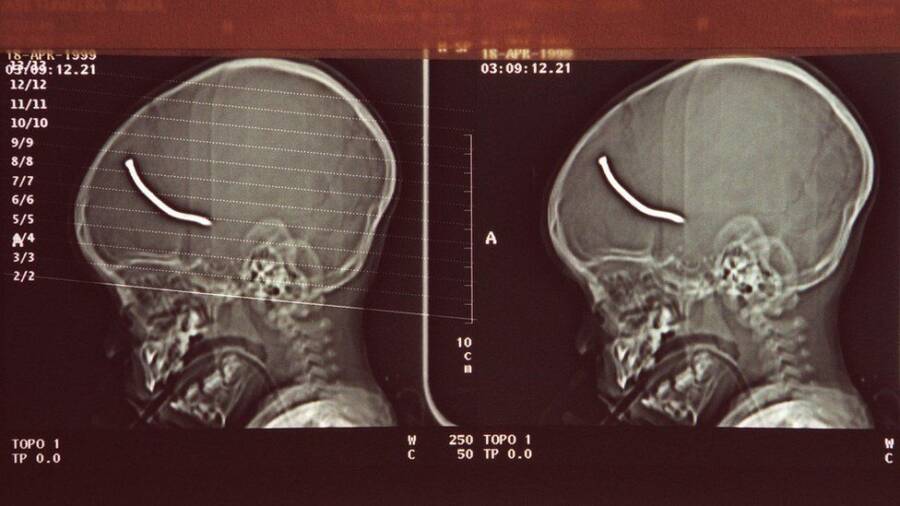 Wikimedia CommonsAn X-ray of a one-year-old survivor of the London nail bombings. His skull had been pierced by one of the many nails.

On April 24th, Copeland’s second attack hit the Bangladeshi community in East London. This time, 13 people were injured. But the attack could have hurt more people if Copeland hadn’t made one mistake. He thought that Saturday was Brick Lane’s busiest market day, but it was actually Sunday.

Another reason why this bomb didn’t do as much damage is that a random passerby noticed it and put it in the trunk of a car before calling the police. Shortly thereafter, it exploded in the car.

Of course, those who were unlucky enough to be near the car got the worst of the explosion. Emdad Talukder was one of the 13 people wounded that day, with the blast sending debris “four stories high.” He recalled being “showered with blood” after a shard of glass struck him in the head, and he said that “people had no idea where to go, or how to save themselves.” 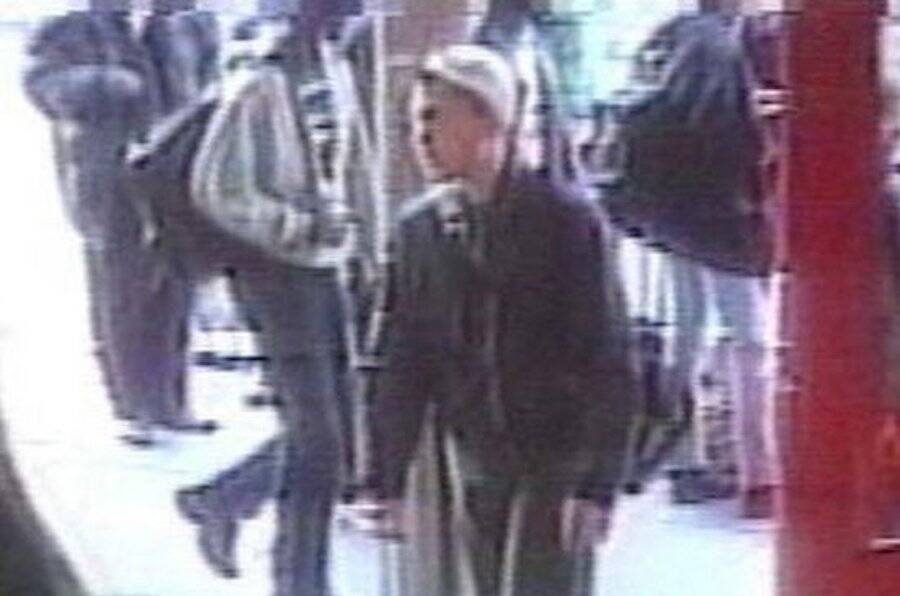 Public DomainDavid Copeland captured on CCTV footage, shortly before planting one of his bombs.

Cash also remembered brushing off his initial misgivings about the bag: “I ordered a drink and, thinking about the bag, assumed it belonged to someone. I can remember weighing up the possibility that it might be a bomb, thinking, ‘But these things only ever happen to other people.'”

After the bomb exploded in the legendary bar, Cash said, “The next thing I knew, I was on my hands and knees in front of a shop window. I stared at my reflection, unable to recognize myself.”

To make matters worse, some homophobic passersby seemed to be happy about this particular bombing. Cash recalled one woman from a nearby pub who showed up “grinning with a pint in her hand.” She then used a gay slur and told someone she “wanted to get a better view” of the chaos.

What Happened To David Copeland After The London Nail Bombings? 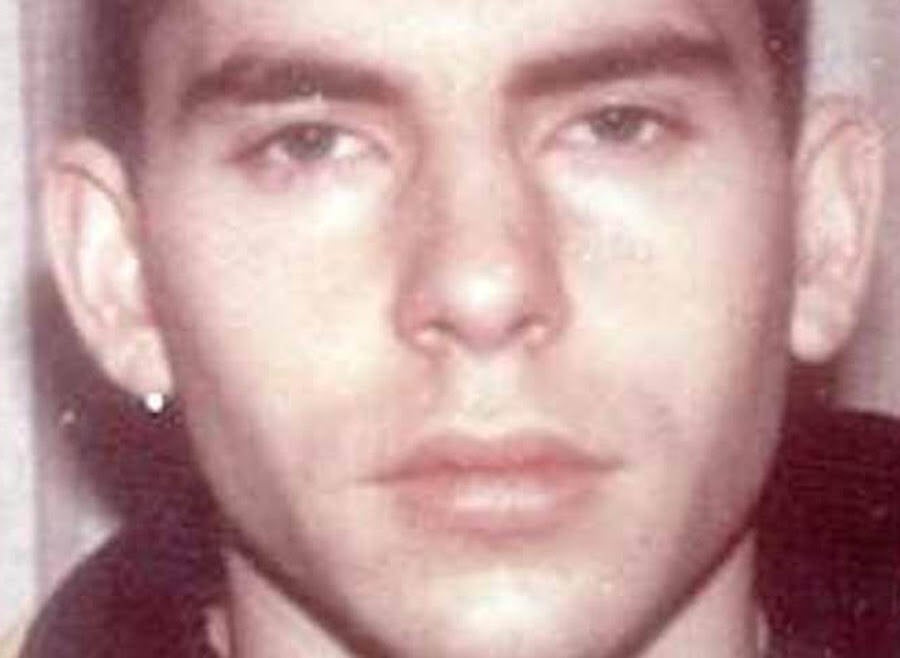 Public DomainAn undated photo of David Copeland, who is currently serving out multiple life sentences at the HM Prison Frankland.

On the same night of the third and final bombing, David Copeland was arrested at his home in Cove, Hampshire. According to police, the big tip-off came from Copeland’s coworker, Paul Mifsud, who had recognized him in a widely publicized CCTV shot.

After the first two bombings, police had scoured CCTV footage from those two attacks and provided pictures of the mysterious suspect to the media. Copeland’s image was released to the public just one day before he bombed Admiral Duncan. Apparently aware that the police were closing in on him, Copeland bombed the pub a day earlier than originally planned.

David Copeland confessed to his crimes to the police almost immediately. Just moments after the cops knocked on his door, he admitted, “Yeah, they were all down to me. I did them on my own.”

Copeland then led officers to his bedroom, where he showed them his Nazi paraphernalia and newspaper clippings of bombings and other atrocities from all over the world — including his own attacks.

When asked why he targeted Black people and South Asians, Copeland said, “Because I don’t like them. I want them out of this country. I’m a national socialist, Nazi, whatever you want to call me, I believe in the master race.”

As for why he attacked gay people, he apparently viewed them as “degenerates.” However, he was also afraid of people thinking he was gay since he never had a girlfriend. And some believe that Copeland may have been secretly questioning his sexuality as well. 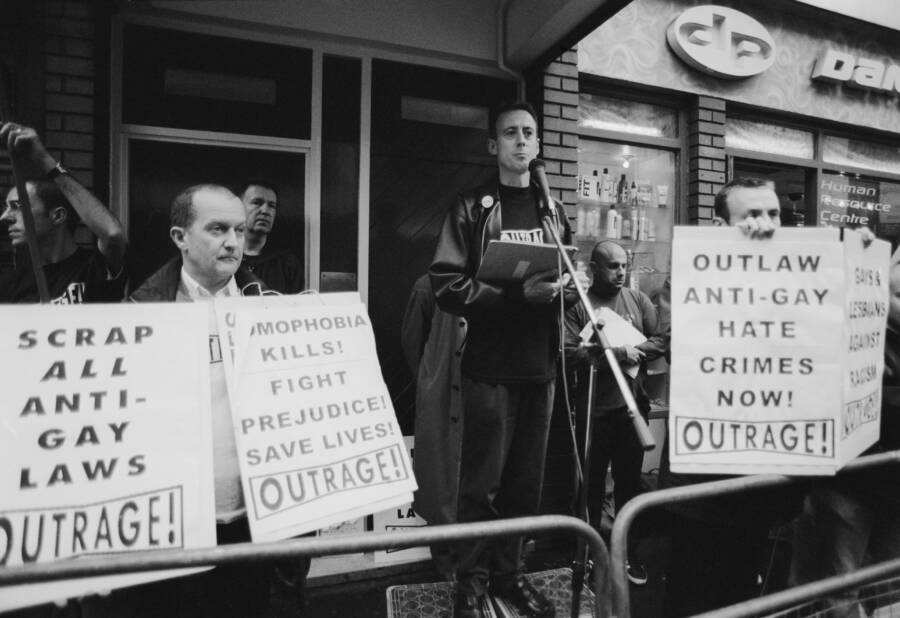 Steve Eason/Getty ImagesA vigil near the Admiral Duncan pub on May 7, 1999.

It’s believed that Copeland also had some form of mental illness — but it’s not clear how severe it was or how big of a role it played in his crimes.

Five psychiatrists would later say that Copeland was suffering from paranoid schizophrenia. But Copeland himself denied this. He also made it very clear why he had carried out the attacks: “My main intent was to spread fear, resentment, and hatred throughout this country. It was to cause a racial war.”

Not only did he show no remorse for his actions, but he also expressed a desire for more violence. Writing to a BBC correspondent, Copeland said, “I bomb the Blacks, Pakkies, degenerates. I would have bombed the Jews as well if I’d got a chance.” And even though he was already in custody, he reportedly threatened to assassinate a Spice Girl.

To this day, he remains in the HM Prison Frankland — and he has not made many friends there. In 2014, he attacked a fellow prisoner and got an extra three years tacked on to his life sentences. More recently in 2021, a former inmate named Andy Ross who knew Copeland revealed that he had converted to Islam in the hopes of getting a “second chance.”

Ross said, “Copeland prays every day and sees practicing as a Muslim as a way of getting forgiveness and changing. But he still has a twisted mind.”

To that point, Copeland allegedly orders his fellow inmates to call him “Saddam” — as a nod to the notorious Iraqi dictator.

After reading about David Copeland, take a look at Samantha Lewthwaite, an ordinary British millennial who became the “White Widow” terrorist. Then, learn about Shamima Begum, a British teen who decided to join ISIS.