The Wild Story Behind This Photo Of Elvis And Nixon

On December 21, 1970, President Nixon and Elvis Presley met in the Oval Office, where they discussed the Beatles, politics, and drugs.

As two of the best-known figures of the 20th century, this image of President Richard Nixon and the King of Rock and Roll Elvis Presley standing side by side in the Oval Office has piqued the interest of every generation that follows it. Indeed, as of 2015, the image was the most-requested photograph in the entire U.S. National Archives.

However, as iconic as this Elvis and Nixon photo is, the story behind it is even more captivating.

In The Days Before Elvis And Nixon Meet, The King Splurges 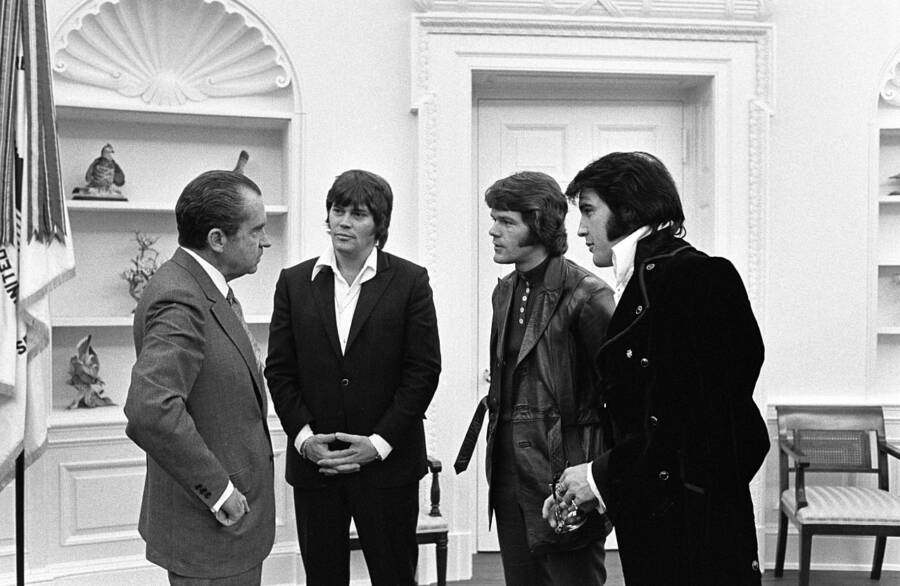 Getty ImagesElvis and his associates Delbert “Sonny” West and Jerry Schilling speak candidly with the president.

The fateful meeting of Elvis and Nixon started a few days before the photo was taken. It was December 1970, and Elvis Presley had just spent $100,000 on Christmas presents which included 32 handguns and 10 Mercedes-Benzes. His wife Priscilla and his father both reprimanded him, telling the King of Rock and Roll that maybe $100,000 was a little much to spend all at once.

Irritated by their reaction, Elvis took his presents and hopped onto the next available flight out of Memphis and headed to Washington D.C. Then, perhaps because he got bored, Elvis hopped onto another flight to Los Angeles.

At some point during his travels, the King decided that what he really wanted for the holidays was a badge from the Federal Bureau of Narcotics and Dangerous Drugs. The King was a noted collector of police badges, and the narc badge seemed to him like the ultimate addition to his collection.

Presley thought the badge might allow him to fly outside of the country with his collection of handguns, should his boredom ever escalate beyond the continental United States. Indeed, according to Presley’s wife, “The narc badge represented some kind of ultimate power to him,” she wrote in her memoir. “With the federal narcotics badge, he [believed he] could legally enter any country both wearing guns and carrying any drugs he wished.”

Given that Presley had a notorious addiction to opiates, perhaps this badge would also be an ironic symbol of his celebrity.

So, just one day after arriving in Los Angeles, Elvis headed back to D.C.

How Elvis Scored A Meeting With The President 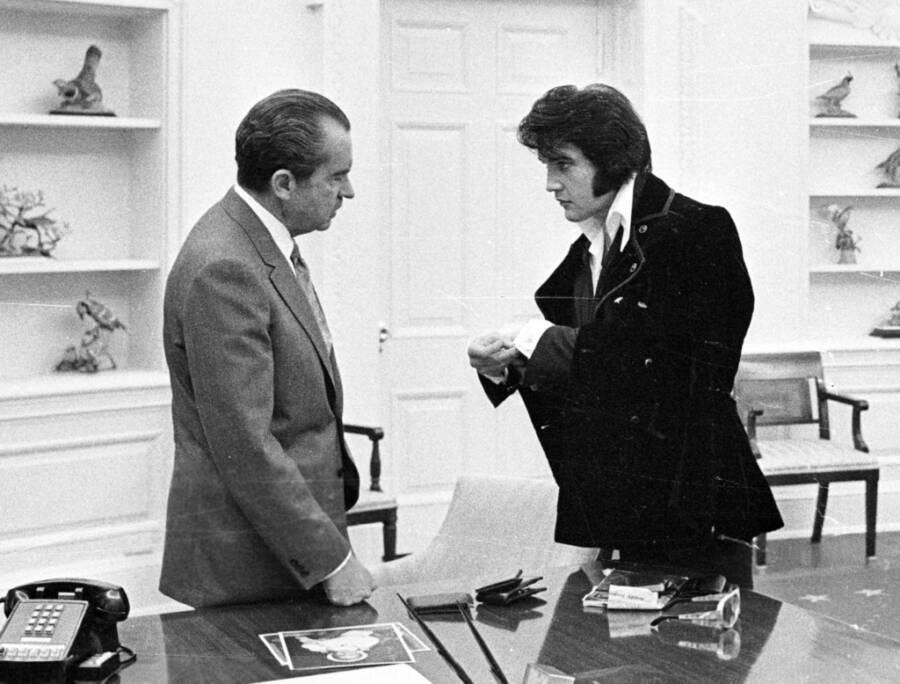 Getty ImagesWhile no transcript of this meeting exists, Nixon likely accepted in the hopes that Elvis’ support of him would win over the younger generation.

While on his flight, Elvis penned a handwritten note to President Nixon in order to request a personal meeting.

“Sir, I can and will be of any service that I can to help the country out,” he wrote. In return, he wanted a federal agent’s badge, which he was willing to wait for. “I will be here for as long as it takes to get the credentials of a federal agent,” he concluded.

Once in D.C., Elvis checked into the Washington Hotel under the name Jon Burrows. Then, he took a limo to the White House and dropped off his letter. On his way back to his hotel, Elvis stopped by the offices for the Bureau of Narcotics and Dangerous Drugs to personally request the badge, just in case the letter to Nixon didn’t work out.

They denied his request.

However, back at the White House, good news was awaiting Elvis. His letter had miraculously found its way into the hands of one of Richard Nixon’s aides named Bud Krogh. 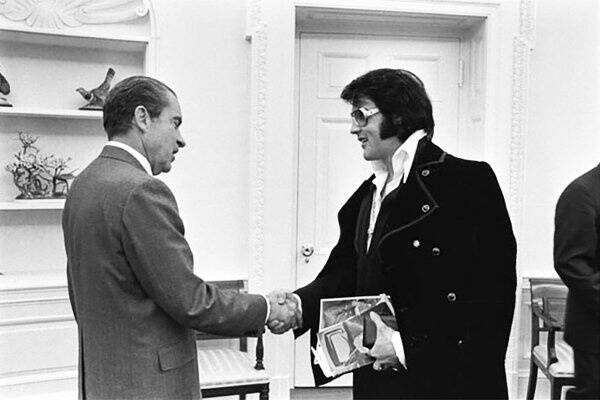 Getty Images“I’m on your side,” Presley allegedly told Nixon at their meeting.

Luckily for Elvis, Krogh was a big fan. Excited by the idea of getting Elvis and the president together, Krogh persuaded the Chief of Staff to set up a meeting. Just six hours after arriving in Washington D.C., Elvis arrived back at the White House for his meeting with the President of the United States.

In true Elvis fashion, the King arrived decked out in a purple velvet suit and a gold belt buckle. He also came bearing a gift, a mounted Colt .45 that he had taken right off of the wall of his Los Angeles home.

Unfortunately, the Secret Service confiscated the King’s gift before he could pass it onto the president. However, once they thoroughly checked him out, they escorted him into the Oval Office. 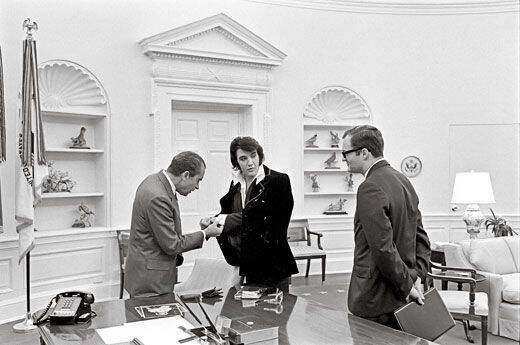 Getty ImagesThe president gifts the King some souvenir cufflinks from the White House.

Ironically, this conversation of Nixon’s wasn’t recorded, as the infamous recording system that would spell his demise had not yet been installed. Instead, all that exists of this meeting is a note written by Krogh.

According to staffers, the meeting was a brief one during which Elvis showed off his collection of police badges and told Nixon that he was in full support of his presidency. At the end of the meeting, Elvis asked for a narcotics badge.

To his surprise, Nixon granted his wish. To Nixon’s surprise, Elvis hugged him.

According to Krogh, the badge was merely an honorary one that didn’t carry any real authority behind it, but Elvis was convinced that he had received the real thing anyway. 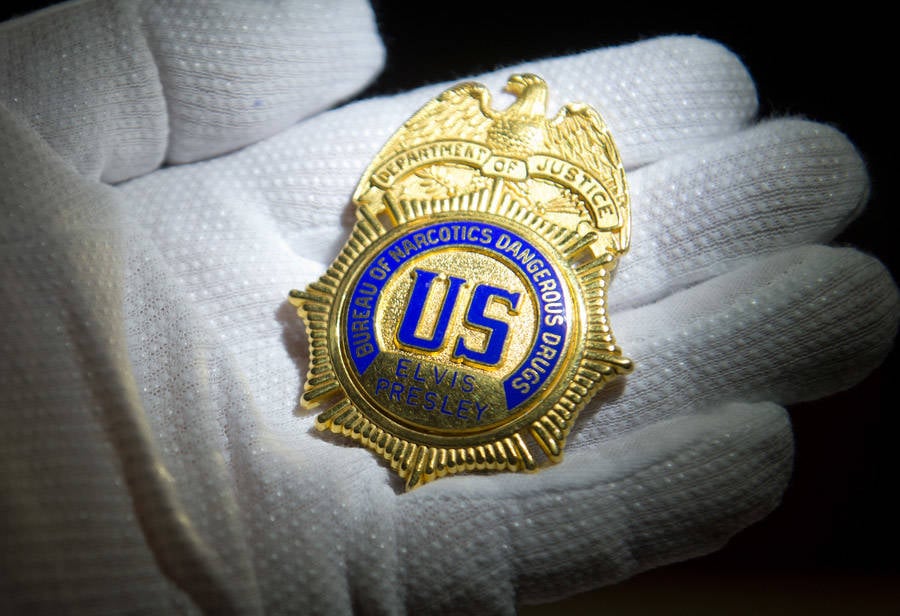 After the meeting, Elvis went home with his badge, which of course, yet unbeknownst to him, did not actually permit him to cross borders with firearms or narcotics. At the request of the King, the meeting was kept secret for a year and not even publicized until after Elvis’ death by overdose years later.

Today, the Elvis and Nixon photo remains iconic, depicting a moment where two public figures from seemingly different walks of life came together for a hilarious reason. Even years later, Krogh believes it’s the sheer absurdity of the Elvis and Nixon image that keeps it so popular.

“It’s a jolt seeing them together,” he said. “Here is the leader of the Western world and the king of rock ‘n’ roll in the same place, and they’re clearly enjoying each other. And you think, ‘How can this be?'”

Now that you’ve learned about Elvis meeting Nixon, read about why this Illinois man kept a sandwich that Nixon took a bite out of — 60 years ago. Then, read more on the sad true story of how Elvis Presley died.