From the book he died reading on the toilet to the one person who's been allowed in his bedroom, these Elvis Presley facts reveal rock's weird side.

On January 8, 1935, Elvis Aaron Presley was born–just minutes after his identical twin. And that’s just the first of many seldom-heard, interesting Elvis facts that you probably haven’t come across before.

From dating a 14-year-old to impersonating cops to earning the karate nickname of “Mr. Tiger,” this is the tale of the king of rock and roll’s weird side. See what we mean with these twenty-five things you probably never knew about The Pelvis: 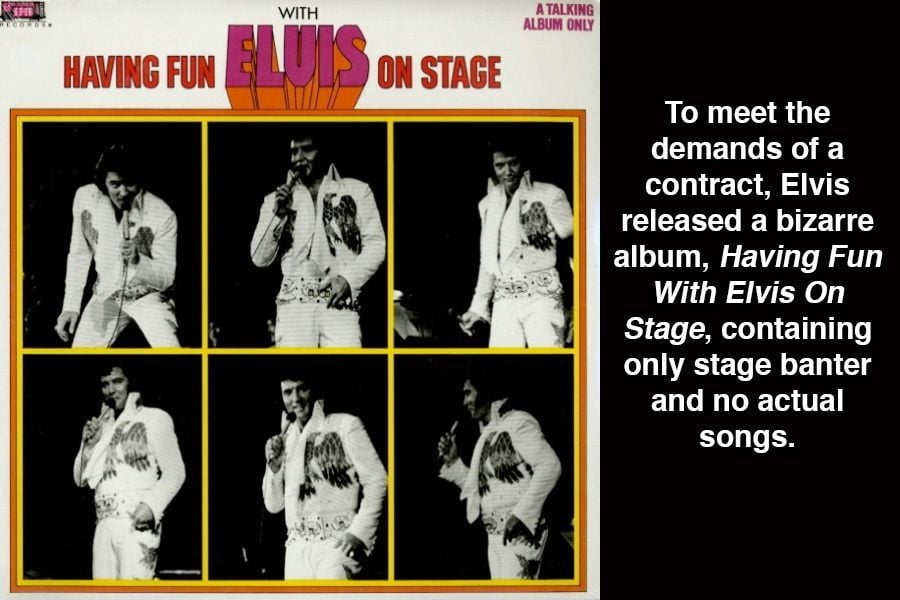 To meet the demands of a contract, Elvis released a bizarre album, Having Fun With Elvis On Stage, containing only stage banter and no actual songs.YouTube 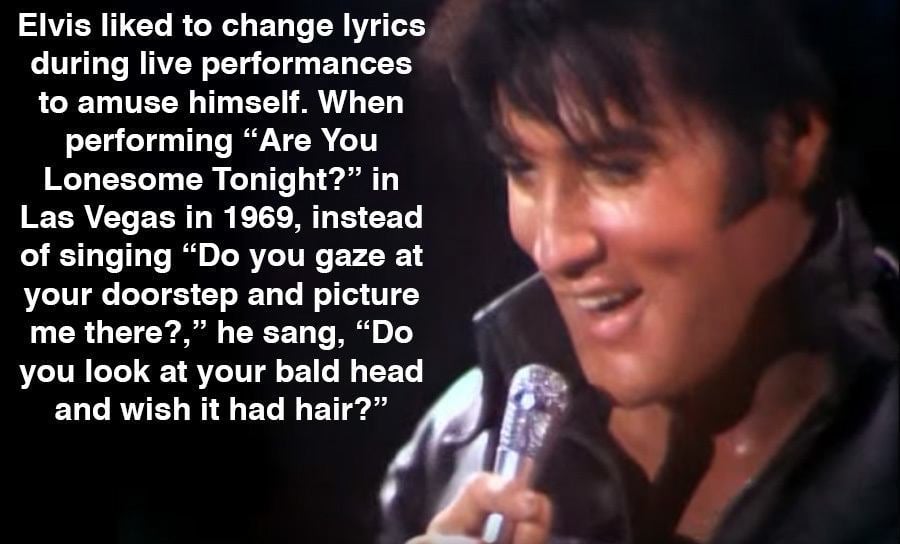 Elvis liked to change lyrics during live performances to amuse himself. When performing "Are You Lonesome Tonight?" in Las Vegas in 1969, instead of singing "Do you gaze at your doorstep and picture me there?", he sang, "Do you look at your bald head and wish it had hair?"YouTube 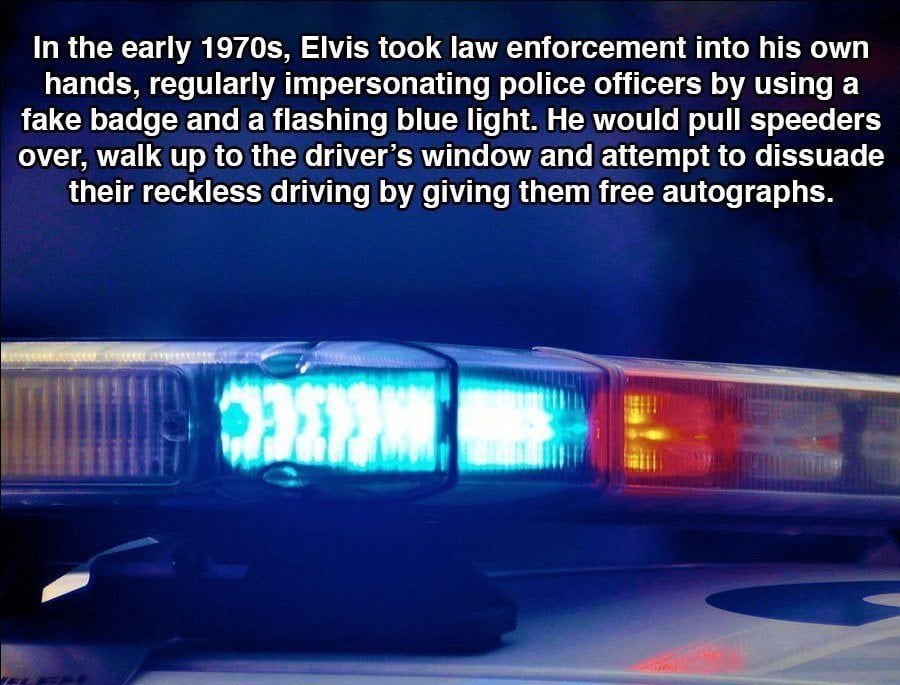 In the early 1970s, Elvis took law enforcement into his own hands, regularly impersonating police officers by using a fake badge and a flashing blue light. He would pull speeders over, walk up to the driver's window and attempt to dissuade their reckless driving by giving them free autographs.Flickr 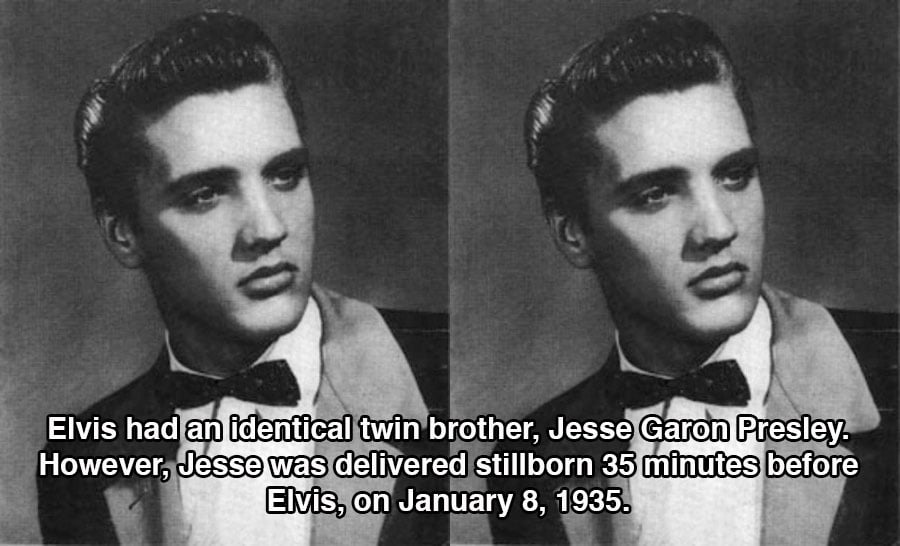 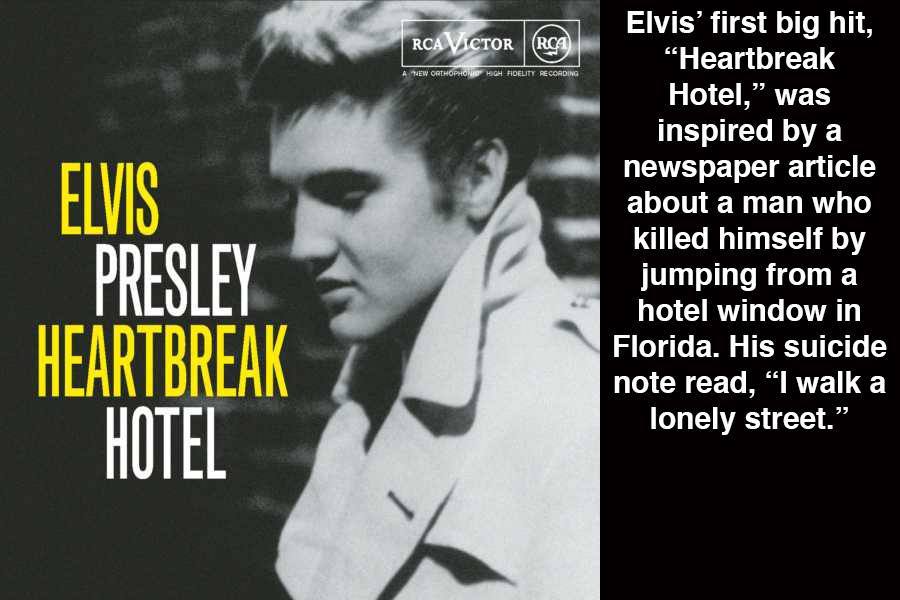 Elvis' first big hit, "Heartbreak Hotel," was inspired by a newspaper article about a man who killed himself by jumping from a hotel window in Florida. His suicide note read, "I walk a lonely street."Wikimedia Commons 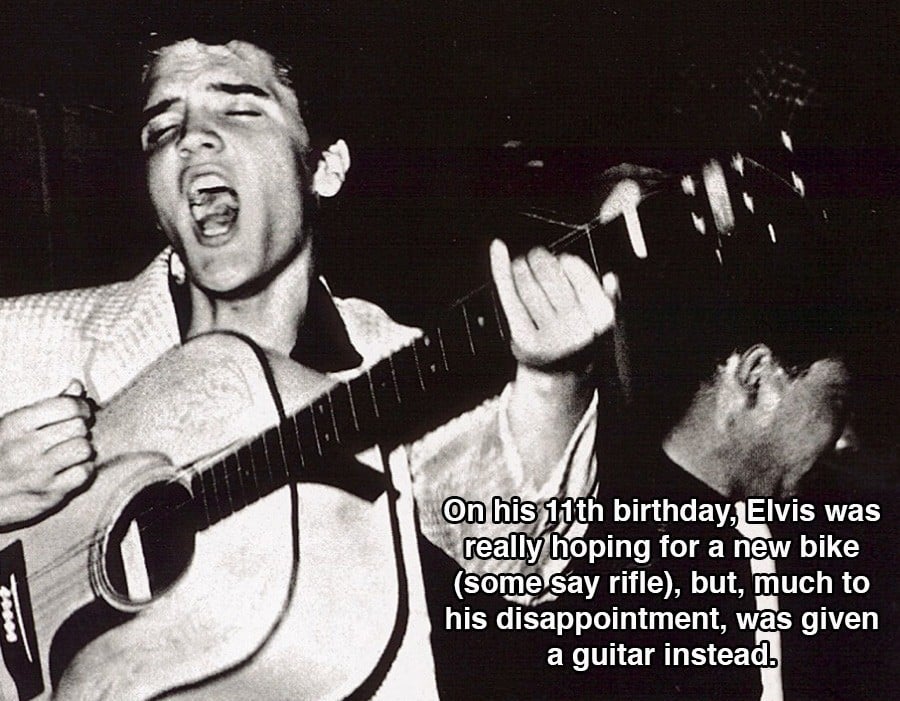 On his 11th birthday, Elvis was really hoping for a new bike (some say a rifle), but much to his disappointment, was given a guitar instead. 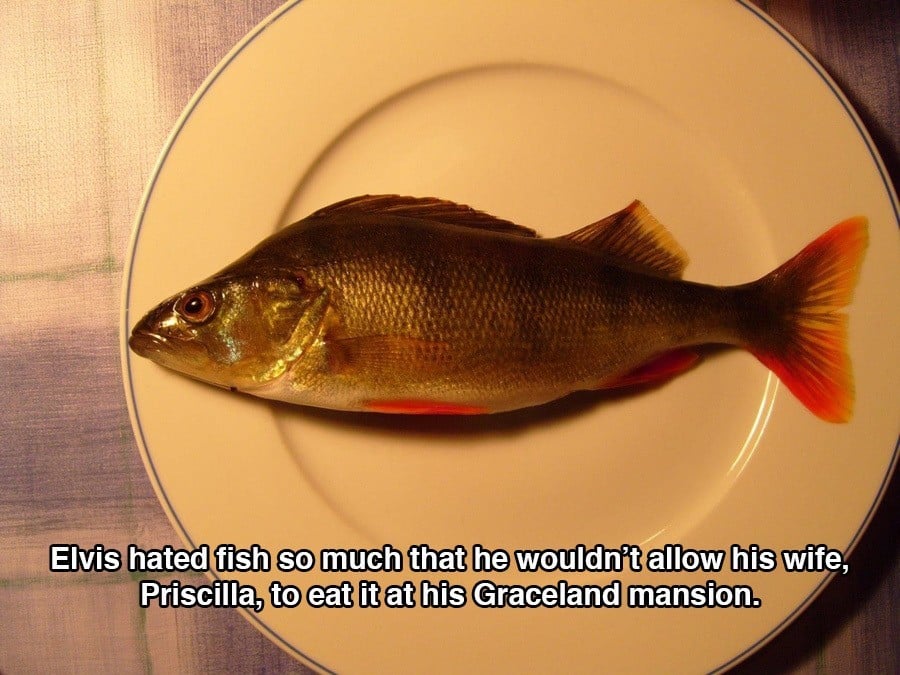 Elvis hated fish so much that he wouldn't allow his wife, Priscilla, to eat it at his Graceland mansion.Wikimedia Commons 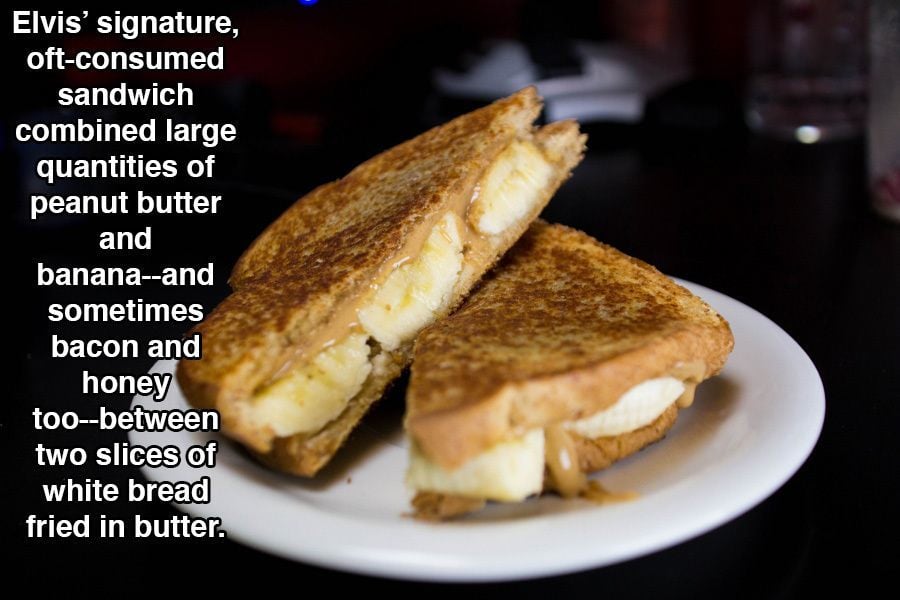 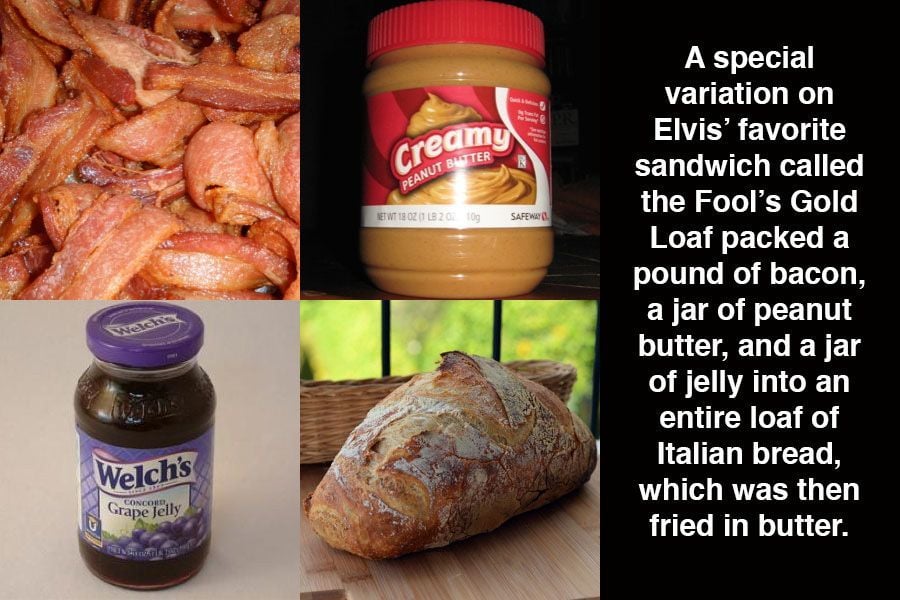 A special variation on Elvis' favorite sandwich called the Fool's Gold Loaf packed a pound of bacon, a jar of peanut butter, and a jar of jelly into an entire loaf of Italian bread, which was then fried in butter. 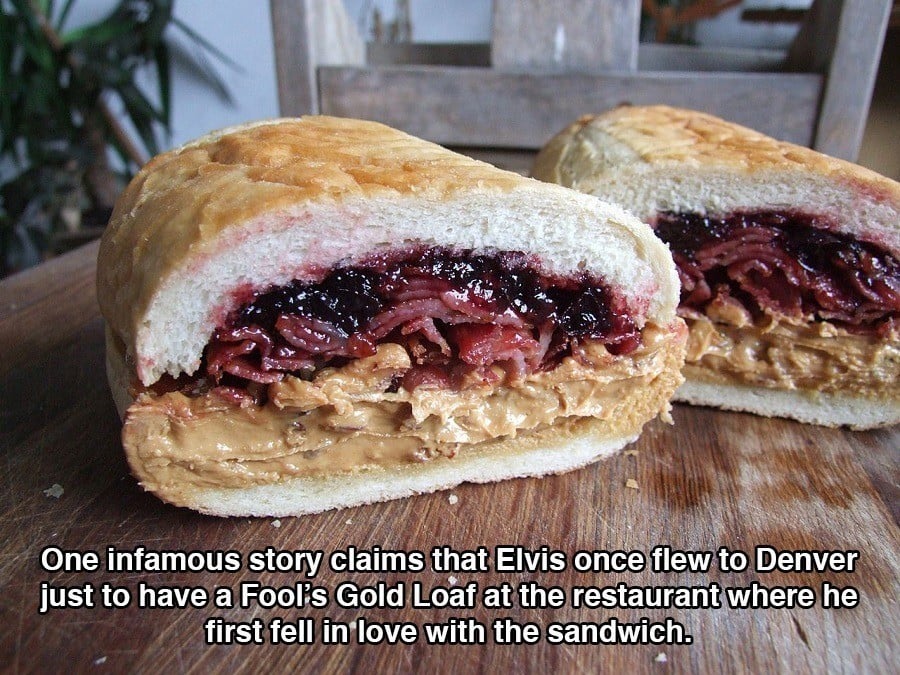 One infamous story claims that Elvis once flew to Denver just to have a Fool's Gold Loaf at the restaurant where he first fell in love with the sandwich.Wikimedia Commons 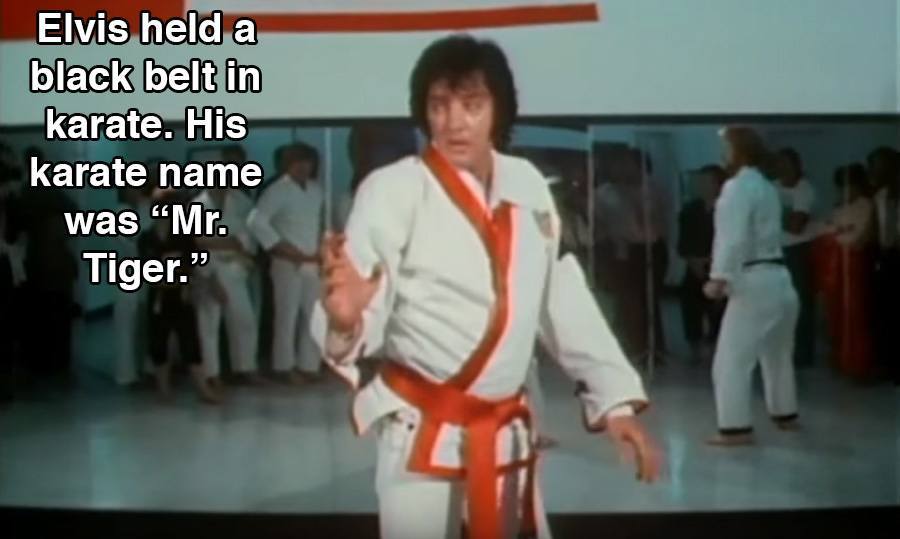 Elvis held a black belt in karate. His karate name was "Mr. Tiger."YouTube 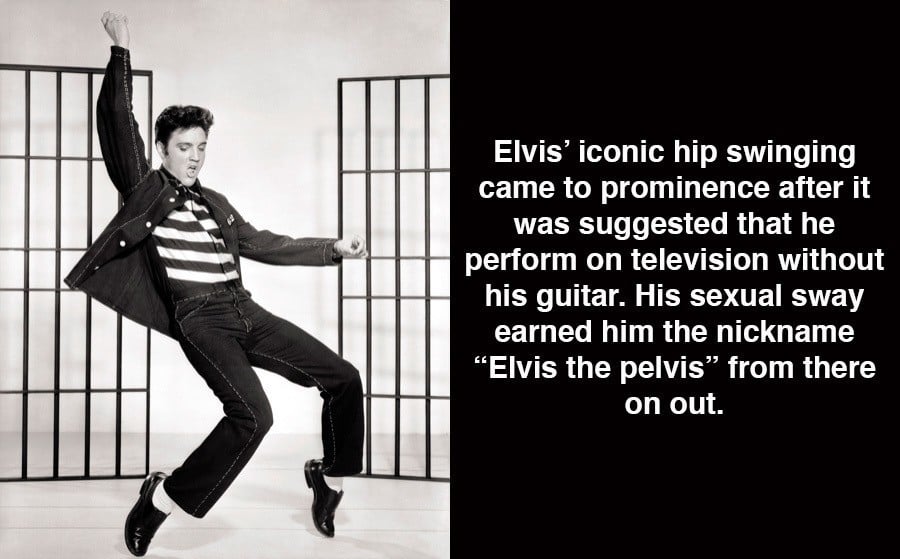 Elvis' iconic hip swinging came to prominence after it was suggested that he perform on television without his guitar. His sexual sway earned him the nickname "Elvis The Pelvis" from there on out.Wikimedia Commons 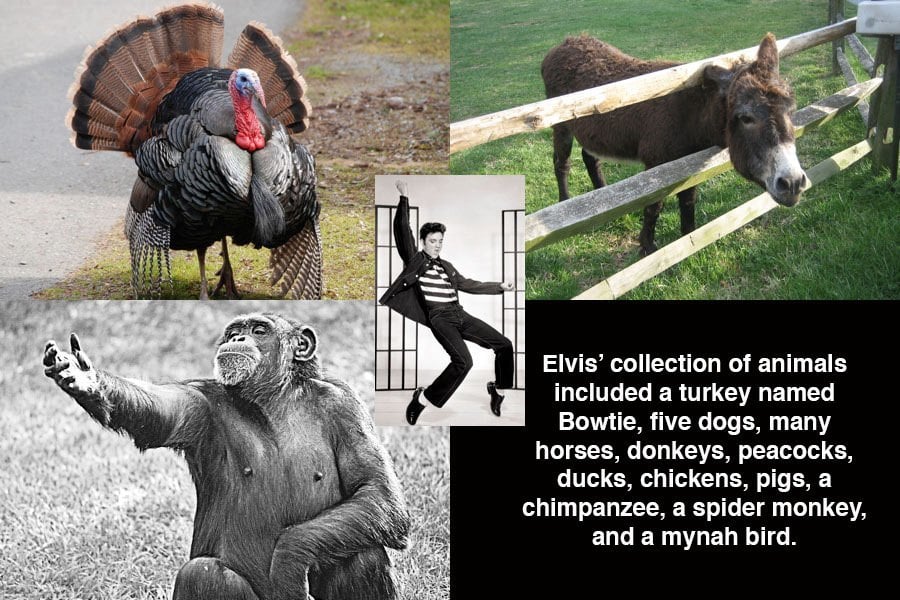 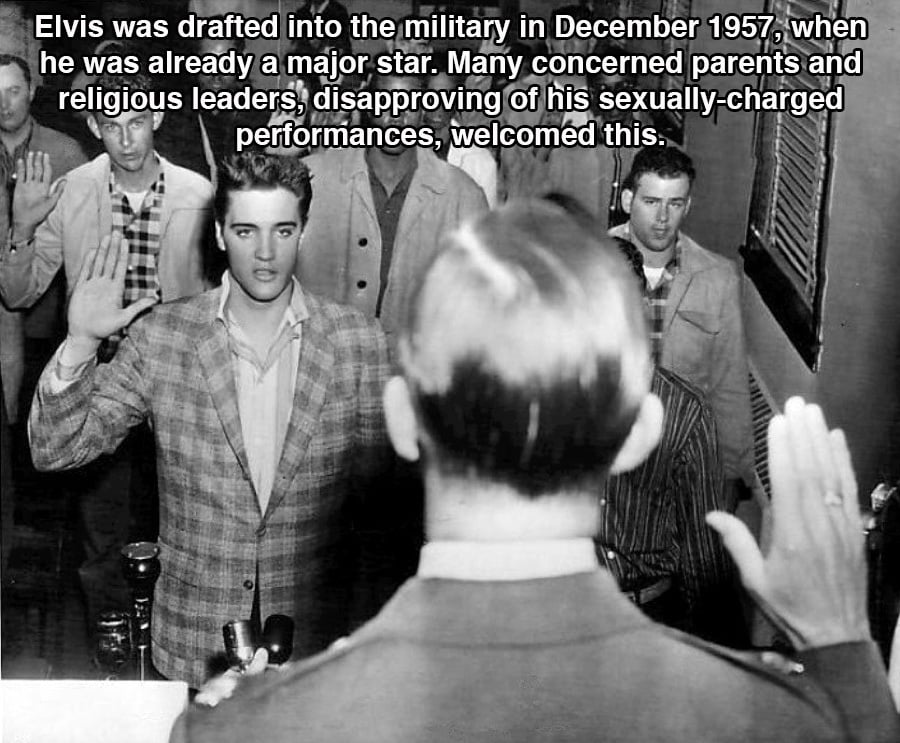 Elvis was drafted into the military in December 1957 when he was already a major star. Many concerned parents and religious leaders, disapproving of his sexually-charged performances, welcomed this.Wikimedia Commons 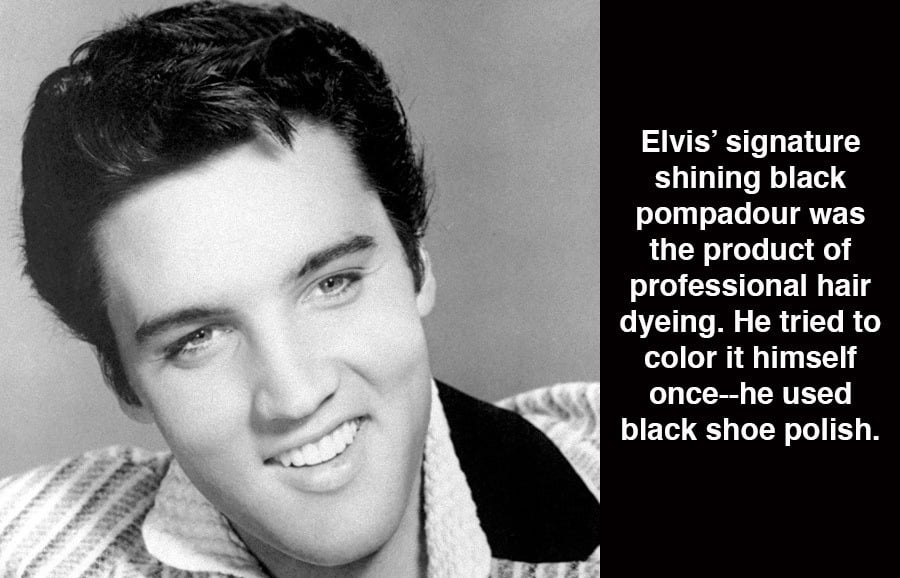 Elvis' signature shining black pompadour was the product of professional hair dyeing. He tried to color it himself once--he used black shoe polish.Flickr 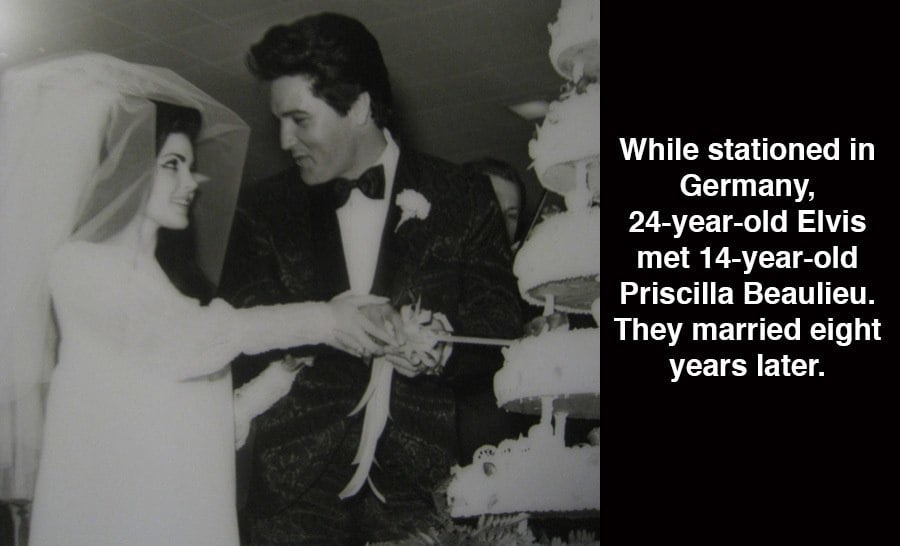 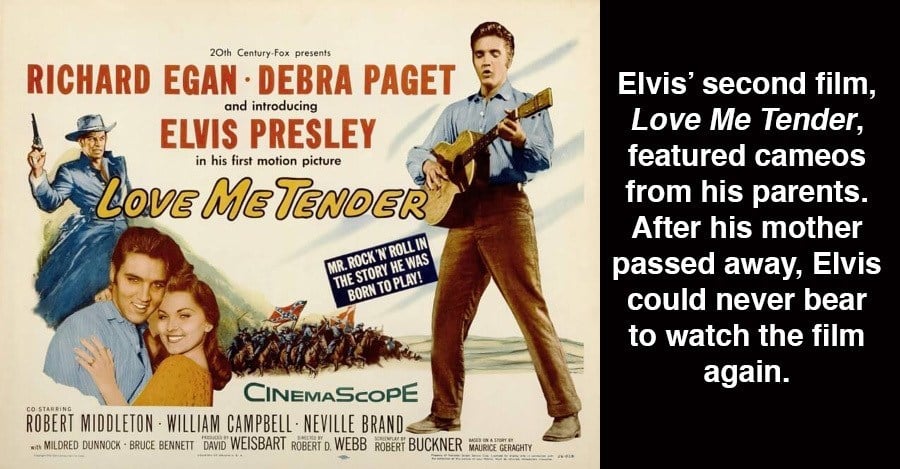 Elvis' second film, Love Me Tender, featured cameos from his parents. After his mother passed away, Elvis could never bear to watch the film again.WordPress 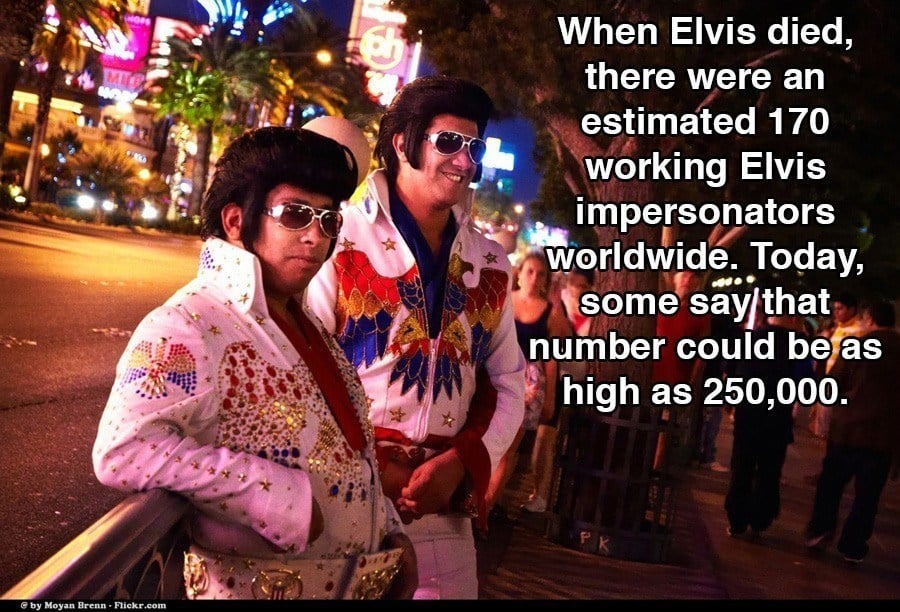 When Elvis died, there were an estimated 170 working Elvis impersonators worldwide. Today, some say that number could be as high as 250,000.Wikimedia Commons 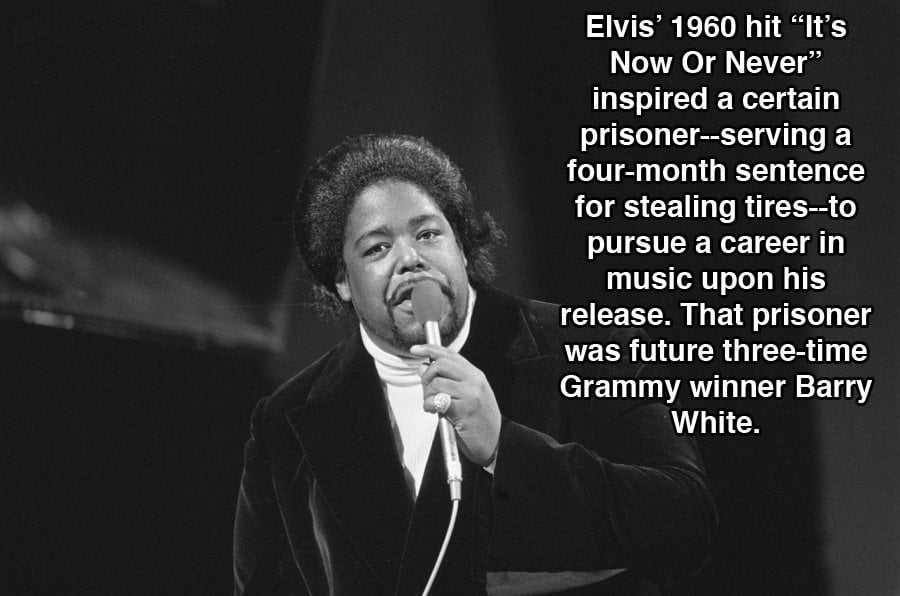 Elvis' 1960 hit "It's Now Or Never" inspired a certain prisoner--serving a four-month sentence for stealing tires--to pursue a career in music upon his release. That prisoner was future three-time Grammy winner Barry White.Wikimedia Commons 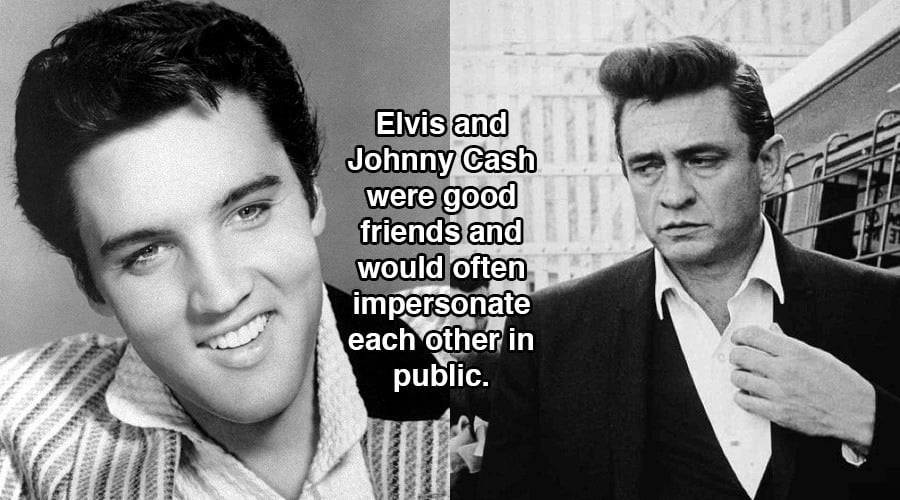 Elvis and Johnny Cash were good friends and would often impersonate each other in public. 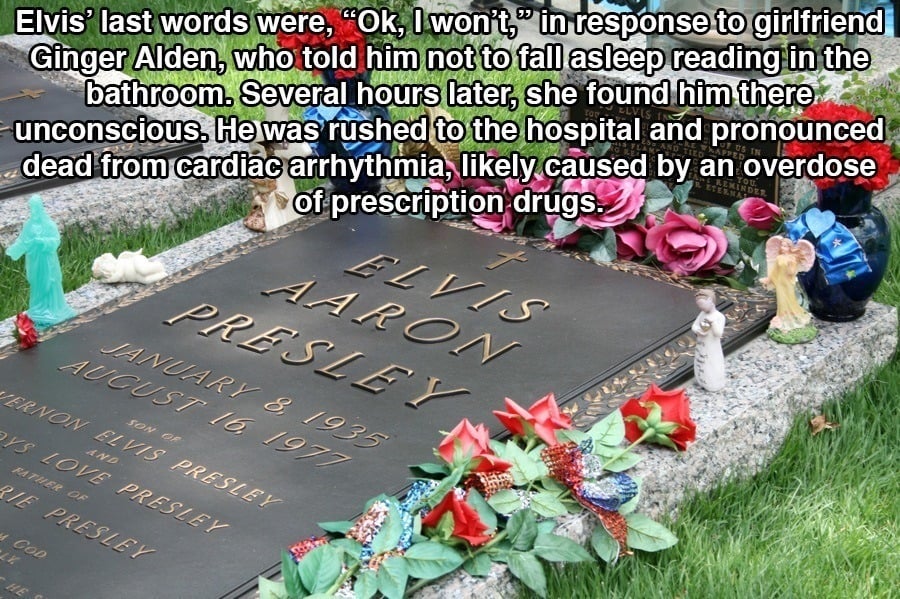 Elvis' last words were, "Ok, I won't," in response to girlfriend Ginger Alden, who told him not to fall asleep reading in the bathroom. Several hours later, she found him there unconscious. He was rushed to the hospital and pronounced dead from cardiac arrhythmia, likely caused by an overdose of prescription drugs.Wikimedia Commons 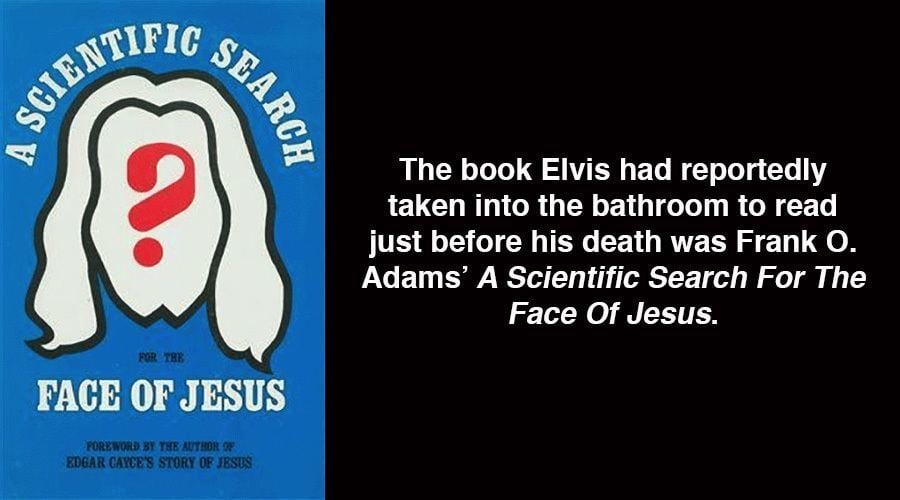 The book Elvis had reportedly taken into the bathroom to read just before his death was Frank O' Adams A Scientific Search For The Face Of Jesus.Aaron Sheppard 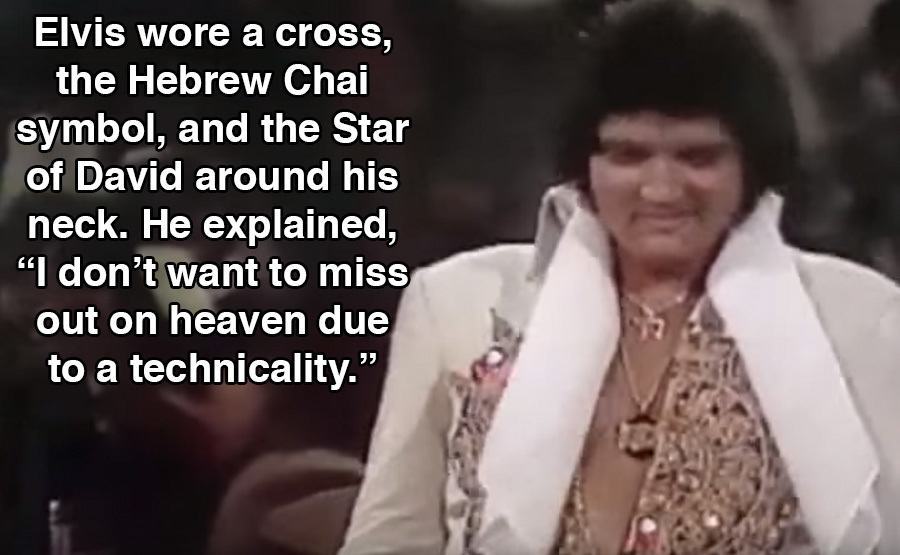 Elvis wore a cross, the Hebrew Chai symbol, and the Star of David around his neck. He explained, "I don't want to miss out on heaven due to a technicality."YouTube 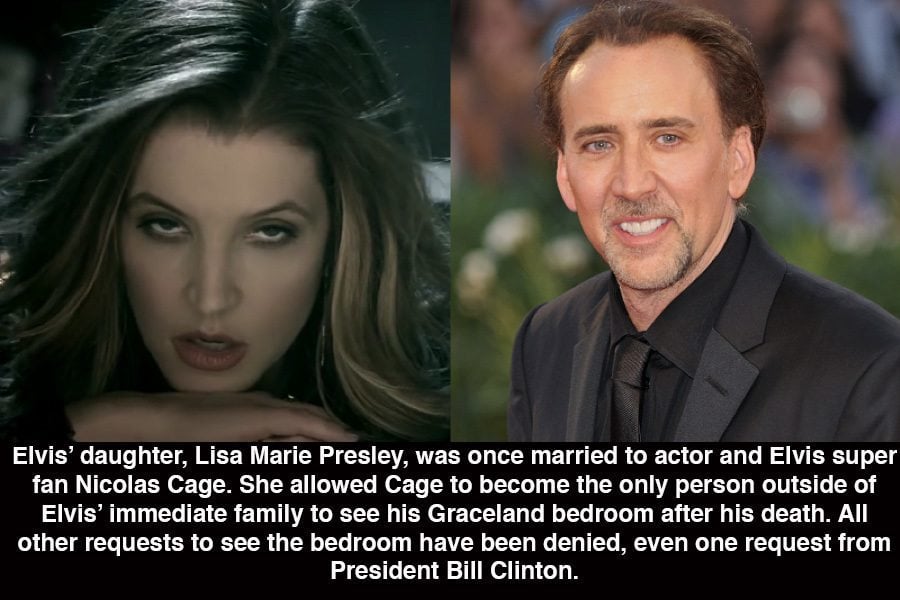 Elvis' daughter, Lisa Marie Presley, was once married to actor and Elvis super fan Nicolas Cage. She allowed Cage to become the only person outside of Elvis' immediate family to see his Graceland bedroom after his death. All other requests to see the bedroom have been denied, even one request from President Bill Clinton.

For more on Elvis Presley, see why his fans were the original Beliebers and discover where he ranks among rock and roll's most iconic hairdos.