Legend has it that the Chicago gangster spent his final years searching for treasure he'd buried but then lost in Florida. He couldn't find it and we may never truly know how much Al Capone was worth. 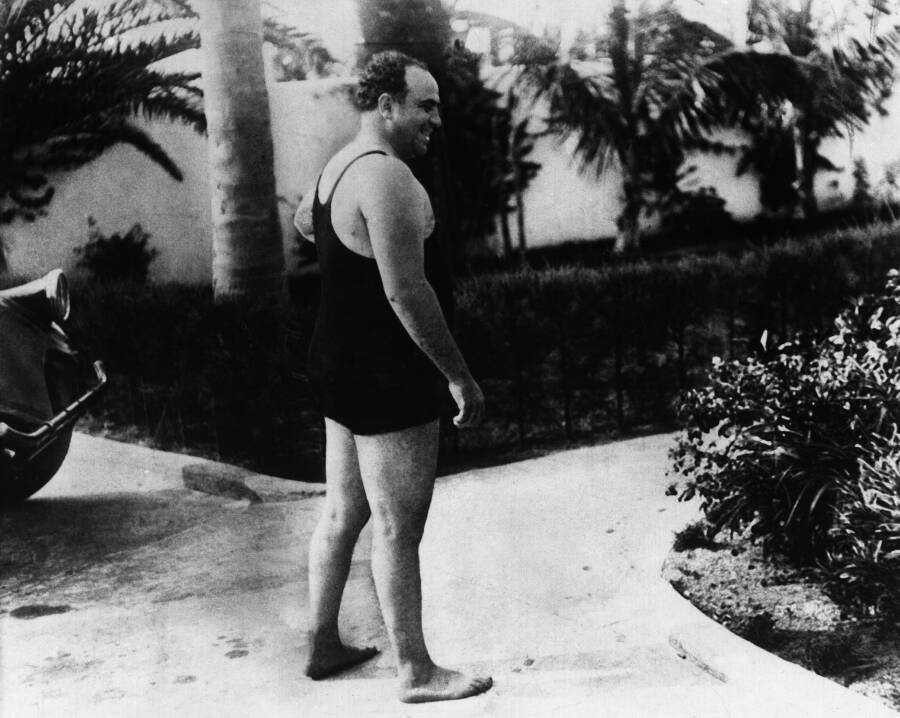 Ullstein Bild/Getty ImagesNear the end of his life, Al Capone couldn’t remember where he buried his money.

At the height of his power, Al Capone employed more than 600 gangsters all over Chicago. It’s still disputed how much money the infamous mobster actually made, though most estimates claim he was worth about $100 million. In today’s terms, that’s nearly $1.5 billion.

Capone’s rise to riches began when he became the boss of organized crime in Chicago in the 1920s. Known as The Outfit, this consortium boasted revenue streams that ranged from the illegal sale of alcohol to prostitution.

As the head of this lucrative operation, Capone made no qualms about spending his money. From buying opulent hotel suites to complementing his Chicago home with one in Florida, he wasn’t too frugal.

Since Capone predominantly used cash and didn’t leave much of a paper trail, it’s hard to tell where he lines up with other gangsters from history. His grandniece Deirdre Marie Capone said he hid and buried an untold fortune, but was too delusional upon release from prison to remember where.

It’s generally agreed that Al Capone’s net worth was about $100 million, or nearly $1.5 billion today. While the latter seems more impressive than the former, it was still remarkable in an era that heralded the Great Depression.

The Details Of Al Capone’s Net Worth 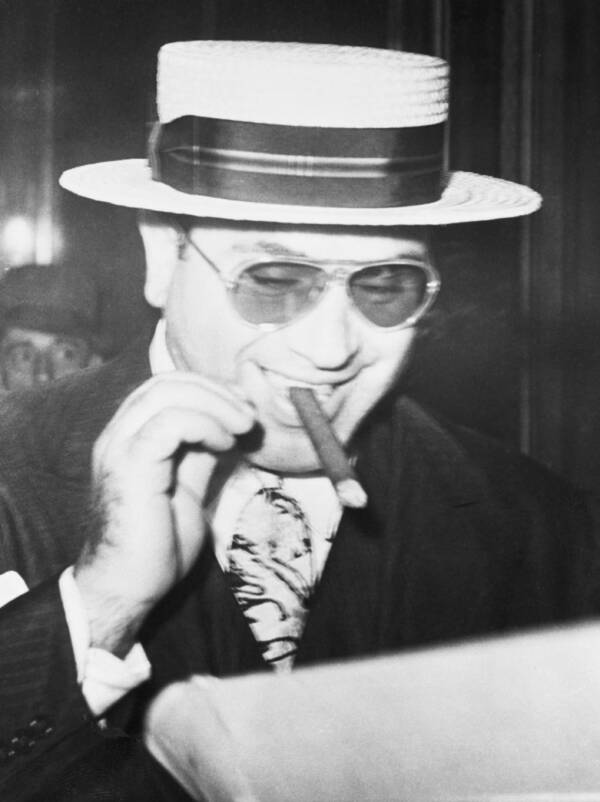 Bettmann/Getty ImagesAl Capone being questioned about a judgement against him for income tax violations.

Al Capone was part of numerous New York street gangs as a teenager, but his true ascent came when mobster Johnny Torrio invited him to work for James “Big Jim” Colosimo in Chicago in 1919.

As a bouncer at a Colosimo bordello, Capone “sampled” some of the prostitutes and contracted syphilis. Left untreated, the disease would affect both his finances and his judgment later on in life.

But in 1925, he was hyper-focused on building an empire. He was 26 when Torrio resigned and handed him the reigns of the Outfit. Profits skyrocketed.

For instance, the Hawthorne Smoke Shop sold tobacco, but it was also a casino-style gambling operation. In 1924, the books showed a net income of $300,000 — around $3.6 million by today’s standards. Meanwhile, the Harlem Inn brothel made $230,000 annually (or about $2.7 million).

“I violate the Prohibition law — sure. Who doesn’t?…There’s only one thing worse than a crook, I think, and that is a crooked man in a big political job, a man who pretends he is enforcing the law and is really making dough out of breaking it. Even a self-respecting hoodlum hasn’t any use for that kind of fella.” — Al Capone

To be clear, Capone operated gambling halls and brothels like these all over town. With his areas of business entirely illegal, they were all cash-based, and thus only reported legally acquired income, such as tobacco sales.

Ultimately, the government estimated the Outfit’s income to be $50 million per year from bootlegging, $25 million from gambling, and around $10 million from drugs and prostitution. It’s no wonder why the operations were truly untouchable for years.

How Capone Lost His Money 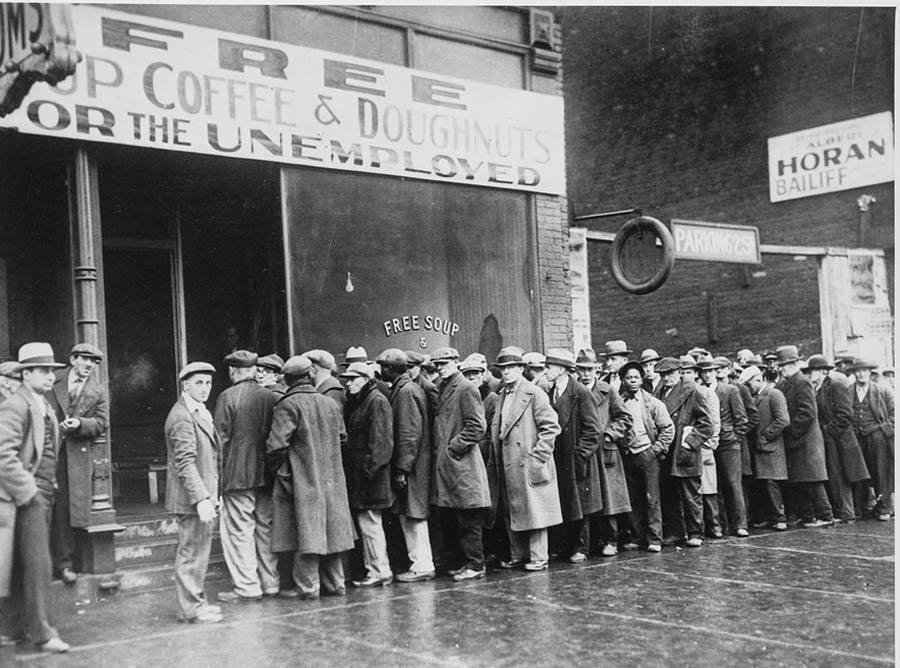 Wikimedia CommonsIn 1931, dozens of unemployed men lined up in front of a Chicago soup kitchen, which was run by Al Capone.

It was clear to anyone in the know that Capone’s whiskey came from Canada through Michigan. Much of it came from New York, too, with the help of Frankie Yale, who had mentored Capone before he left Brooklyn.

The notorious Purple Gang controlled the Detroit River and used a lightweight “whiskey six” automobile to skirt across its frozen surface. Detroit supplied up to 75 percent of America’s illegal liquor during Prohibition, with a pleased Capone profiting from the supply chain.

Of course, his drivers were frequently hijacked by rival gangs and had to navigate Prohibition agents on the road. You’d either get robbed and murdered or arrested, in other words.

A Capone lieutenant later recalled that the most dangerous part of the trip was “that stretch of road between Gary and Michigan City that runs along the Lake Michigan sand dunes” — with rumors persisting to this day that mounds of secretly stashed whiskey remain buried there.

Capone would certainly be furious at profit lost for fear of legal or rival retribution, but made enough to not be financially impacted. It was only when his mental faculties deteriorated in prison that buried money became a real issue. 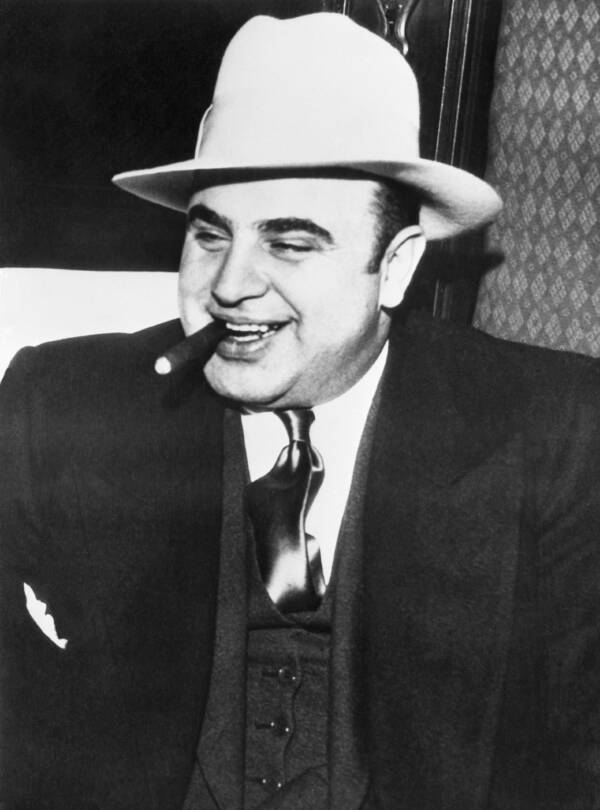 Bettmann/Getty ImagesAl Capone in the heavily guarded train taking him to federal prison.

He was so forgetful upon release that his grandniece later revealed a troubling conversation that her grandfather Ralph had with him – during which Capone admitted he buried a pile of cash he could no longer find. Ralph said his brother “had this pathetic helpless look on his face,” and said:

“I put it in a bunch of different banks and had the safety deposit box keys and the names I used in a strong box,” he added. “I buried the box, but when I went to dig it up after I got out, I couldn’t find it. Then I thought I had buried it another place but when I looked, it wasn’t there either.”

Capone explained that he misplaced a fortune — one that could’ve lasted for generations. Purportedly, the big scary gangster broke down in tears.

How Capone Compares With The Richest Gangsters Of All Time 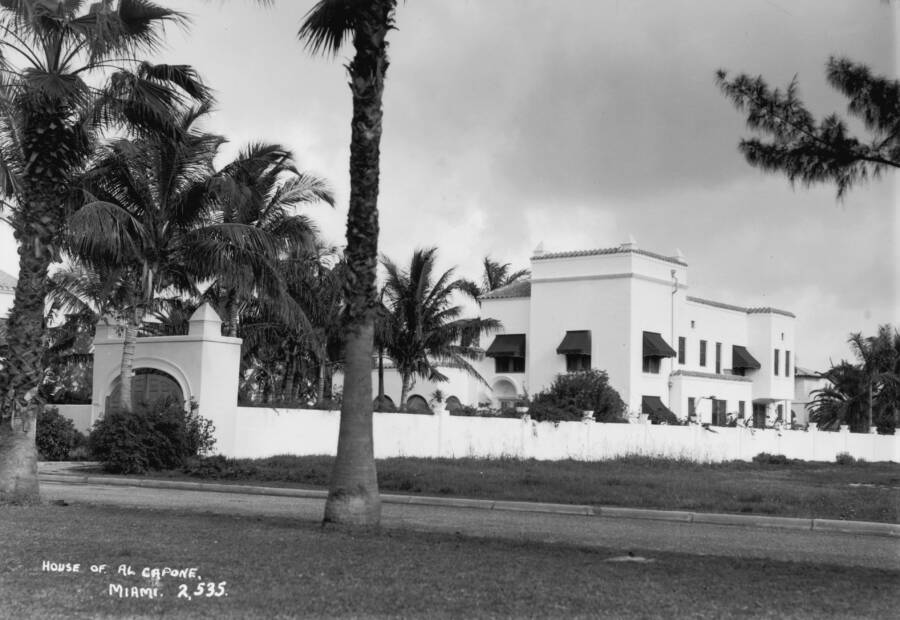 Ironically, it was Al Capone’s fortune itself that brought him down. He never filed a federal income tax return and claimed he had no taxable income. When the IRS followed the money, they discovered he made millions on income that was never taxed — garnering him 22 counts of evasion.

For his time, Capone was ruthless about getting money — but he also had a heart for the masses. He opened one of the first soup kitchens in Chicago during the Great Depression. But after he died, it was his mysterious vault that enthralled people the most.

The Mystery of Al Capone’s Vaults in 1986, hosted by Geraldo Rivera.

On April 21, 1986, the safe was opened on live television. The Mystery of Al Capone’s Vaults spanned two hours.

An energized Geraldo Rivera served as host for the millions who anxiously watched — only to find nothing but dirt and empty bottles inside.

With the supposedly buried treasure is still missing, who knows — some lucky homeowner could make a pretty remarkable discovery someday.

After learning about the net worth of Al Capone, read about the real-life Goodfellas and the mobsters behind the movie. Then, learn about Frank Capone and why he was even more bloodthirsty than his brother.