Discover The Disturbing Legend Of Rat Kings, The Tangled Super-Rodents Of Your Nightmares

For hundreds of years, people around the world have reported stomach-turning sightings of creatures made up of many rats tangled together at their tails — but are these rat kings actually real?

Few creatures are as historically reviled as the rat. It’s known for carrying disease and was blamed for spreading the Black Death in the mid-14th century — although recent evidence suggests that this did not happen. The mere mention of its name is enough to incite fear and revulsion in many.

Given the historically unforgiving associations people have with the rat, it’s no wonder that some have imagined it to have abilities and behaviors that are flat-out unbelievable. Case in point: the “rat king.” 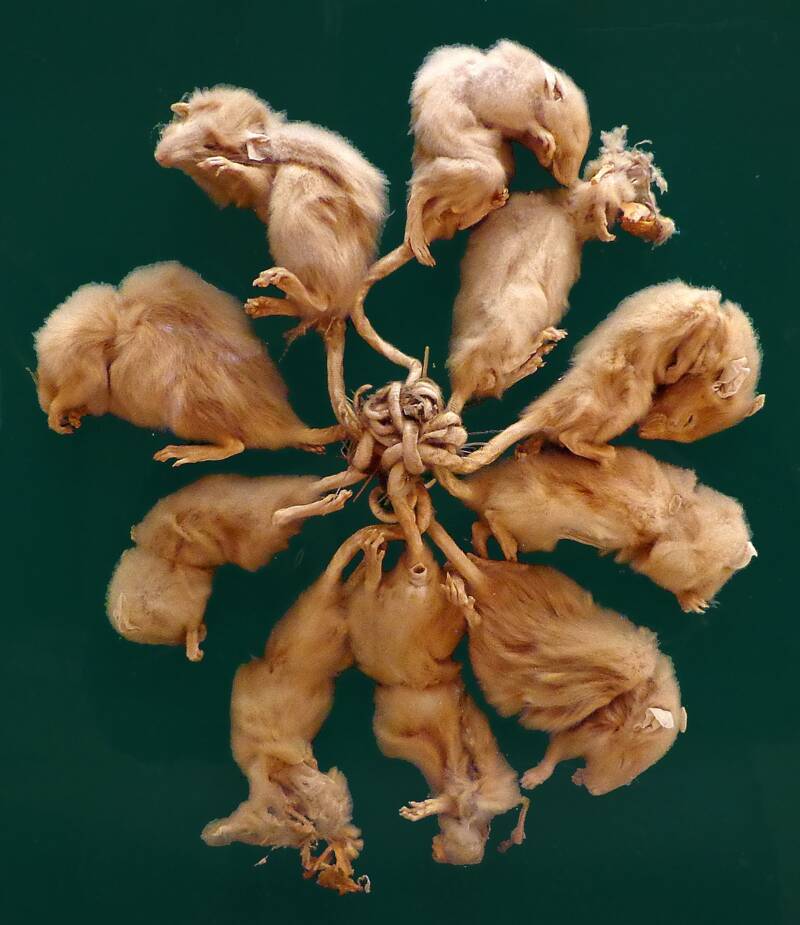 Strasbourg Museum“Rat king” is a term used to describe a group of rats whose tails became entangled, like this specimen found in France in 1894.

Put simply, rat kings refer to a bunch of rats whose tails have become entwined, effectively creating one gigantic super-rat.

While countless scientists dismiss the phenomenon as nothing more than folklore, various specimens are on display in museums across the world. So what are rat kings, and how might they come into existence? 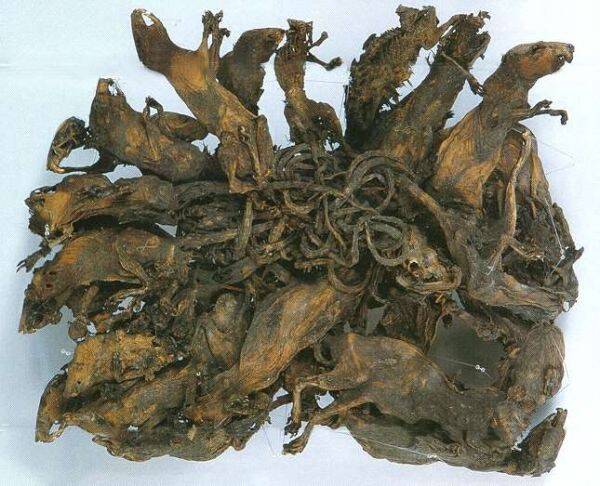 Wikimedia CommonsThis is the largest specimen ever recorded, with 32 rats. It was discovered in 1828 and is still on display in Altenburg, Germany.

Rat king sightings date as far back as the 1500s, with most taking place in Europe. Those who hold that the phenomenon is real, say that it occurs when a group of rats, while confined to a small space such as a burrow or other cramped living quarters, simply becomes matted together.

Others suggest that survival efforts yield the furry amalgam. During particularly cold seasons, the rats will intentionally “tie” their own tails to one another in order to stay huddled and warm.

The phenomenon is made all the more believable because rats, like humans, produce sebum, or natural oil, in order to protect and hydrate the surface of their skin. It is thus possible that the oily tails of a dozen or so rats could form a sticky substance and bind the rats together.

However, as senior curator of mammals at the Museum Victoria in Australia, Kevin Rowe, told Atlas Obscura, “Rodents stuck together could not survive long and are probably in agony and distress until they separate or die.”

Still, other believers in the rat king suggest that urine or feces helps to bind the tails together. Reality bears this thinking out: A 2013 discovery of a “squirrel king” in Saskatchewan, Canada revealed a six-squirrel amalgam, the cause of which researchers attributed to tree sap. 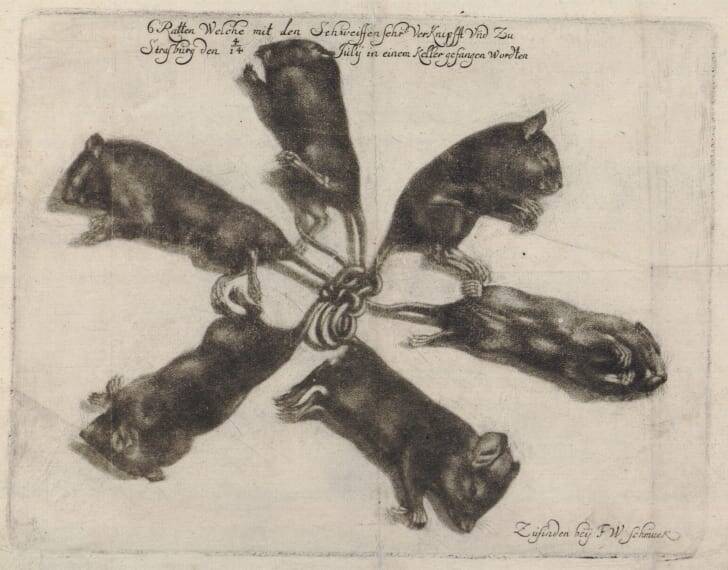 Wikimedia CommonsAn illustration of a rat king found in 1693, by Wilhelm Schmuck.

Luckily for any rats who may find themselves in such unusual circumstances, experts doubt that they would get so far as to the point of meeting such a painful end, as their tails would simply unravel at the first suggestion of separation.

Should a bundle of rats in close proximity form a rat king in an effort to stay warm, some speculate that the newly-formed super-rat would simply unfold as soon as the cold weather passed. At the very worst, the formation would lead an individual rat to simply chew off its tail and exit the knot.

In 1883, a German zoologist named Hermann Landois tried to prove the possibility of rat kings by tying the tails of 10 dead rats together. During his experiment, Landois noted that he was not alone in his endeavor and that there were some who intentionally tied rat tails together for profitable spectacle.

“[It was] lucrative to own a king, and so people began tying tails together… many such sham kings were exhibited at fairs and similar gatherings,” Landois said.

But if rats can in fact untangle themselves from one another, then what is the explanation for rat kings on display in museums? Indeed, according to one scientific paper published on the phenomenon, there have been 58 “reliable” rat kings recorded through history, six of which are on display.

There is one obvious theory to explain these displays, however: they’re fake.

Famous Rat Kings On Display And On Record 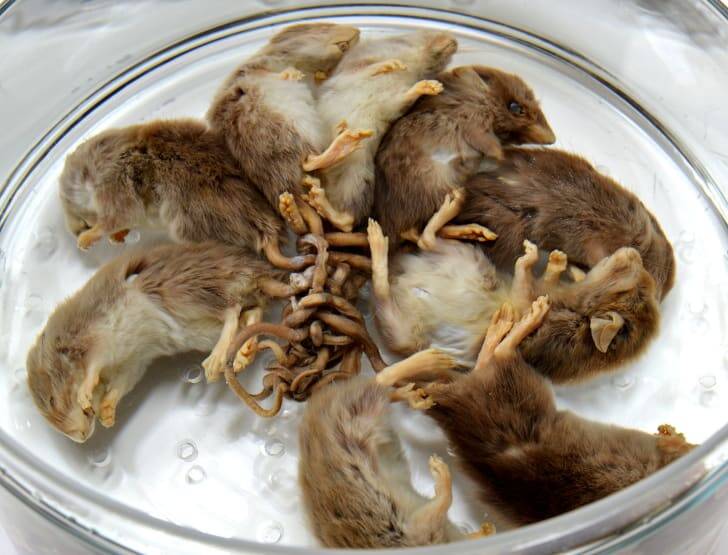 Perhaps the oldest rat king on display is the specimen found in Altenburg, Germany, in 1828. It contains 32 rodents and is the largest specimen in the world. According to the museum, the clump was found by a man named Miller Steinbruck of Thuringia, Germany, while cleaning his chimney.

The earliest mention of a rat king is credited to Johannes Sambucus, a Hungarian historian, who recorded that his servants discovered seven rats with knotted tails in Antwerp, Belgium. Then in 1894, a frozen clump of 10 rodents was found under a bale of hay in Dellfeld, Germany. That specimen is now on display at the Strasbourg Zoological Museum.

While all these specimens reportedly formed naturally, there are some that are admittedly manmade — and not just due to some tinkering scientist tying tails together.

In the case of the rat king housed in the Otago Museum in Dunedin, New Zealand, for example, curators say that their gruesome amalgam formed when the rats became entangled in horsehair. They then fell from the rafters of a shipping office and were beaten to death with an instrument and thus “mashed” together.

Because it’s next to impossible to prove if any single argument is correct, it is likely that the rat king will continue to spark debate. One thing is certain, though: We’re not sure we want to devote the time to collect enough evidence to settle this.

After this look at rat kings, learn why Japan wants to create human-rat hybrids for organ harvesting. Then, peruse these 25 animal bridges that are protecting wildlife from becoming roadkill.