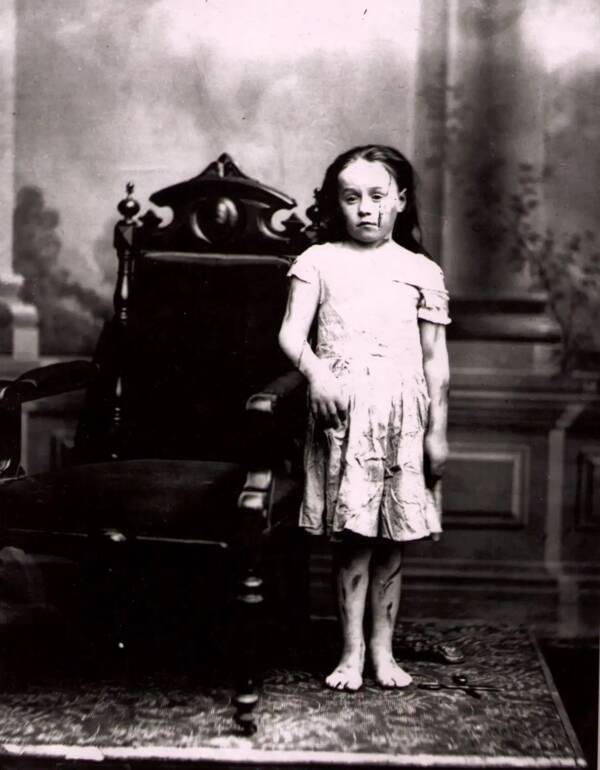 George Sim Johnston Archives of the New York Society for the Prevention of Cruelty to ChildrenMary Ellen Wilson had a prominent scar from a pair of scissors on her face when authorities took her from her foster home.

The first case of child abuse in U.S. history went to trial in 1874. Ten-year-old Mary Ellen Wilson had experienced years of horrific abuse before anyone intervened, but she became the poster child for change in the country.

Wilson’s story is both tragic and astonishing. In an era before child protection laws, it was on animal rights activists to step up and save Wilson from an abusive home — and her case would spur those same activists to push for the laws against child abuse that we have today.

This is the story of Mary Ellen Wilson.

The Abuse Of Mary Ellen Wilson

Tragedy marked Mary Ellen Wilson from birth. Born in 1864, the Civil War would kill Mary Ellen’s father before her second birthday. Her mother, Frances Wilson, had to take a job to support her daughter.

Wilson hired a woman to watch young Mary Ellen so she could work double shifts in the laundry room of a hotel. And when Wilson couldn’t pay, the woman turned the child over to New York’s Department of Charities.

That’s how Mary Ellen Wilson ended up in the foster system. And it was the start of years of abuse.

For the next six years, Mary Ellen lived with Francis and Mary Connolly, according to American Heritage. “My bed at night is only a piece of carpet, stretched on the floor underneath a window,” Mary Ellen later testified in court. “I have never had but one pair of shoes, but I can’t recollect when that was.”

The child lived completely cut off from the world. “I am never allowed to play with any children,” she admitted. “I don’t know how old I am.”

Her adoptive mother locked Mary Ellen in a closet and whipped her viciously.

“Mamma has been in the habit of whipping and beating me almost every day. She used to whip me with a twisted whip, a raw hide. The whip always left black and blue marks on my body.” 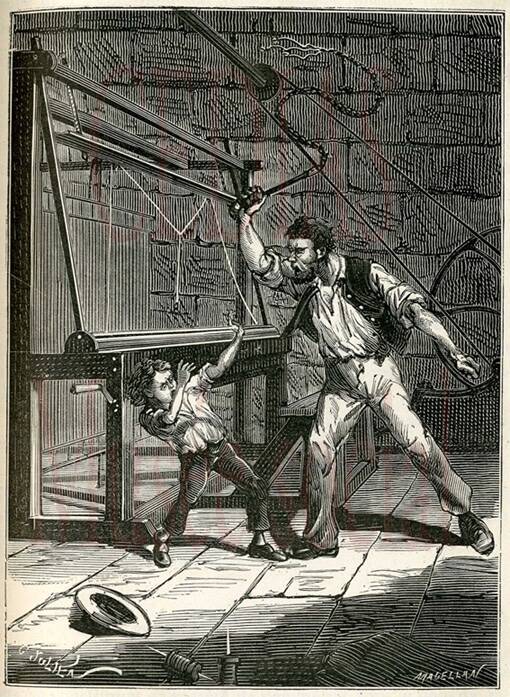 G. Julien/CediasBefore the late 19th century, parents had near absolute authority to discipline their children.

Mary Ellen also explained how her adoptive mother cut her with scissors — and she would carry a prominent scar on her face for the rest of her life.

A worried neighbor reported the abuse of Mary Ellen Wilson to authorities. Etta Wheeler, a caseworker and Methodist missionary, investigated. When she knocked on the door in December 1873, Wheeler was horrified when she saw a “pale, thin child, barefoot, in a thin, scanty dress.”

Mary Ellen Wilson, 9 years old at the time, was the size of a 5-year-old. And the child’s arms and legs were covered in bruises. 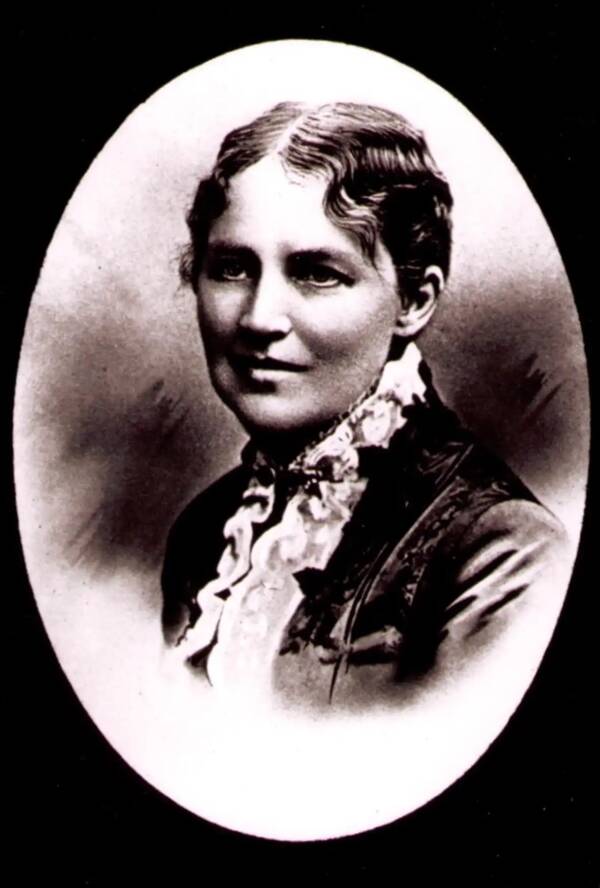 George Sim Johnston Archives of the New York Society for the Prevention of Cruelty to ChildrenEtta Wheeler, the caseworker who intervened to stop the abuse of Mary Ellen Wilson.

Horrified by the abuse, Wheeler went to the police. But there were no laws against beating children – parents still had virtually absolute authority to discipline their children at home.

Charities refused to take Mary Ellen from her adoptive parents without legal authority, and the authorities did not want to intervene in a private matter.

Frustrated, Wheeler grew desperate. So she turned to the founder of the American Society for the Prevention of Cruelty to Animals.

Activist Henry Bergh founded the American Society for the Prevention of Cruelty to Animals (ASPCA) in 1866. Horrified by the treatment of animals, Bergh declared himself the voice for the “mute servants of mankind.” 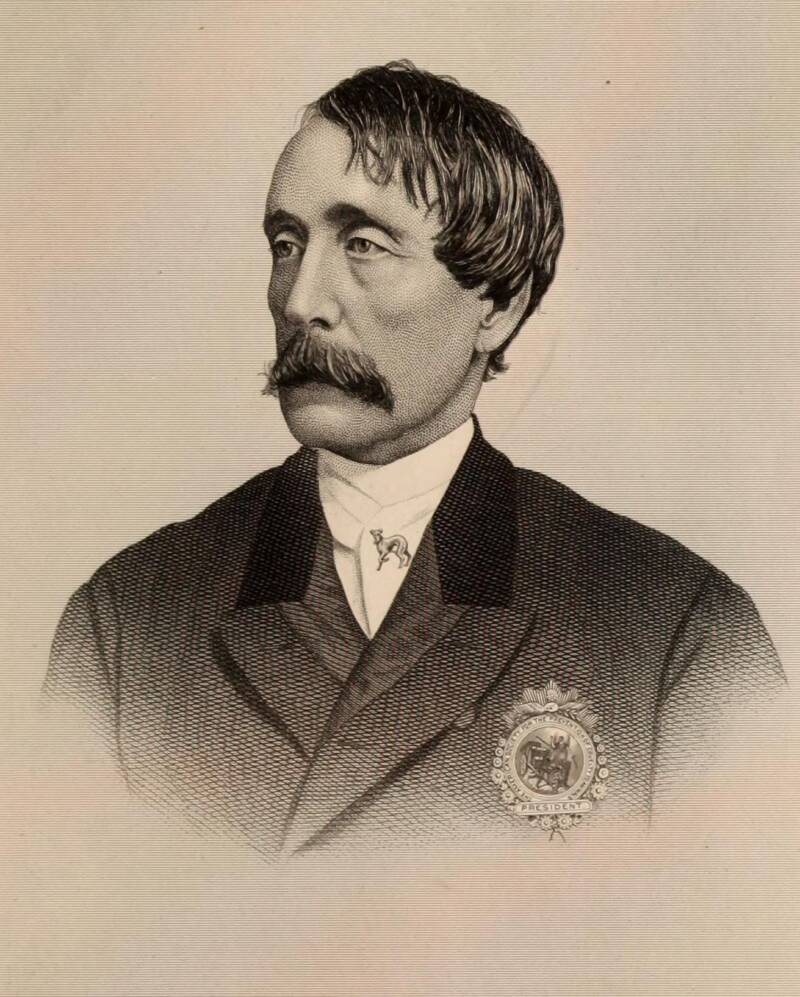 Bergh wrote a Declaration of the Rights of Animals and founded the ASPCA. The organization soon became the enforcers of new anti-cruelty laws.

The activist earned himself many enemies. Newspapers called Bergh “The Great Meddler.” But Bergh firmly believed in his mission. “This is a matter purely of conscience, it has no perplexing side issues. It is a moral question in all its aspects.”

And when Bergh met with Wheeler, he leapt into action. Bergh contacted an ASPCA lawyer and sent an undercover agent to report on Mary Ellen Wilson’s condition. Then Bergh took the matter to court.

In a petition on Mary Ellen’s behalf, her supporters asked a judge to remove the child from her abusive home. The judge agreed – and the first child abuse trial in U.S. history began.

On April 9, 1874, police took Mary Ellen Wilson from the Connolly home and brought her to court. Because Mary Ellen wore tattered clothes, she walked into court wearing a carriage blanket.

Reporter Jacob Riis described the scene. “I saw a child brought in … at the sight of which men wept aloud, and I heard the story of little Mary Ellen told … that stirred the soul of a city and roused the conscience of a world that had forgotten, and as I looked, I knew I was where the first chapter of children’s rights was being written.” 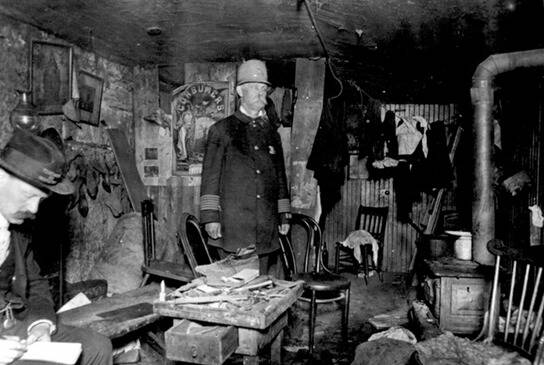 During the trial, Mary Ellen testified against Mary Connolly. On the stand, Connolly defended herself by claiming others were “ignorant of the difficulties of bringing up and governing children.”

The jury deliberated for just 20 minutes before finding Connolly guilty and sending her to prison for one year.

The Movement To Protect Children

After the trial, Etta Wheeler even adopted Mary Ellen Wilson herself, according to the New York Times. Mary Ellen left the tenements of New York City behind, moving to a Rochester suburb.

“Here began a new life,” wrote Wheeler. “The child was an interesting study, so long shut within four walls and now in a new world … But in this home there were other children and they taught her as children alone can teach each other. They taught her to play, to be unafraid, to know her rights and to claim them.” 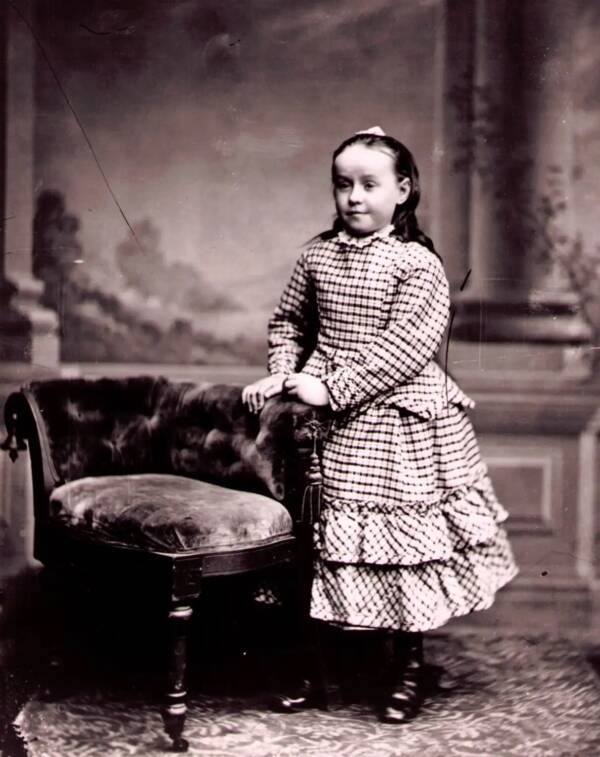 George Sim Johnston Archives of the New York Society for the Prevention of Cruelty to ChildrenAfter her trial, Mary Ellen Wilson lived with the Wheelers in upstate New York.

Mary Ellen’s case inspired Henry Bergh to found the New York Society for the Prevention of Cruelty to Children (SPCC) in December 1874. Over the next year, the SPCC would investigate over 300 cases of child abuse.

When Bergh and the SPCC pushed for laws against child abuse, they faced a backlash. The New York World complained that Bergh wanted permission to “break into the garrets of the poor and carry off their children upon the suspicion of spanking.” In spite of the opposition, the law passed in 1876.

As an adult, Mary Ellen Wilson vowed to give her own children the childhood she never had. She raised two daughters, three step-children, and an adopted daughter.

Etta Wheeler spoke during a 1913 meeting of the American Humane Society, which Mary Ellen attended. As Wheeler concluded, “If the memory of her earliest years is sad, there is this comfort that the cry of her wrongs awoke the world to the need of organized relief for neglected and abused children.”

Mary Ellen Wilson’s tragic story helped change the lives of countless children. Next, read about the acts of child abuse that used to be legal, and then learn about Lauren Kavanaugh, the girl who grew up in a closet.